Updated 8/11/2021: Unfortunately, Scott Jurek was forced to suspend his speed record attempt due to injury. According to his Instagram, Jurek strained his quadricep early in the effort and was unable to continue after several days of attempted rehab. On the eighth day, he called off the attempt just shy of the Mahoosuc region in Maine.

On August 8, famed ultrarunner and thru-hiker Scott Jurek posted a somewhat cryptic photo of a white blaze and spider web on Instagram with the caption “Sometimes you have to go back to the tough places and do the hard things #WebwalkerAT21”. A quick look at his bio page revealed that he is “Currently running southbound on the AT through 22 Native Nation’s traditional territories”. Much like the release of Eminem’s last two rap albums, this announcement was a surprise to most.

Not His First Rodeo

Jurek, regarded as one of the world’s most accomplished endurance athletes, is known not only for his seven consecutive wins at the Western States 100-mile race but also for setting the Fastest Known Time (supported) of the Appalachian Trail in 2015 with a time of 46 days, 8 hours, 7 minutes. He was given the trail name “Web Walker” because of his propensity to be the first one on the trail each morning and thus subjected to the spider webs which had been spun overnight.

Jurek’s previous record attempt was highly publicized and followed closely by the thru-hiking and ultrarunning communities, and the celebration of his accomplishment atop Mt. Katahdin earned him and his crew multiple citations from Baxter State Park for consuming alcohol at the summit, littering (dismissed), hiking with an oversized group (dismissed), and for violating the terms of their commercial permit by filming too close to the peak. The experience of the attempt was thoroughly outlined in North: Finding My Way While Running the Appalachian Trail, Scott and Jenny’s book that was released in nearly three years later.

In 2018, Jurek’s record was snatched by Belgian runner Karel Sabbe and lowered to 41 days, 7 hours, 39 minutes. This time around, Jurek is choosing to go Southbound (SOBO) which is considered a separate record on FastestKnownTime.com. The current supported SOBO record is held by Karl Meltzer with a time of 45 days, 22 hours, 38 minutes set in 2016. 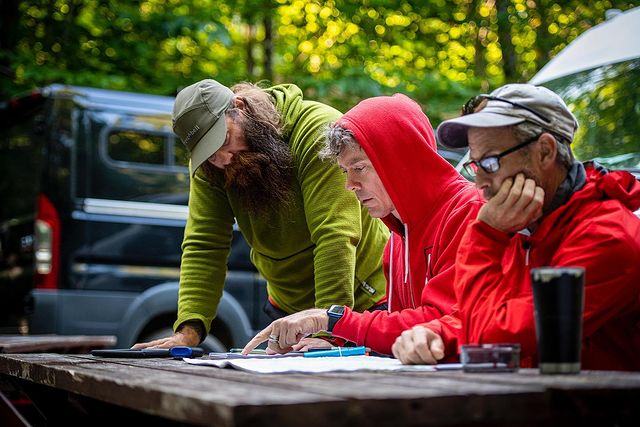 It’s clear that the Jurek camp wants less fanfare around this attempt than the last. Throughout their book, Scott and Jenny explain how it was simultaneously exhilarating and exhausting to have so many well-wishers and fans show up on the trail to give their support of the effort. His current attempt was not made public until four days after starting and he has not shared his tracking information publicly – a common trend among high-profile athletes on premier routes.

The support crew for Jurek includes his wife, Jenny, and their children, as well as photographer Luis Escobar, Tom “Jabba” Gathman (of BPR notariety), record-holder Karl Meltzer, and a number of local friends and experts who all held off on making social media posts until after Jurek’s announcement, though the effort has likely been in planning stages for months.

In order to break Meltzer’s SOBO record, Jurek will need to average nearly 50 miles per day – slightly more if his sights are set on Sabbe’s NOBO record. Though the attempt does not appear to be raising funds for a specific cause, his Instagram bio recognizes the trail’s path leading through former tribal areas to bring awareness to recent land use concerns.

At 47 years old, Jurek is older than any other speed record holder on the A.T. with the exception of Meltzer, who was 49 at the time of his attempt. That being said, he has immeasurable personal experience on trails as well as a wealth of knowledge at his fingertips to ensure a successful attempt. If he can manage to stay healthy, we may just see a new FKT within the next six weeks.