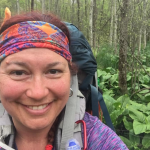 Disclaimer: I’m just a hiker. I’m not a top tier, god level, hiked all the trails known to man super hiker. I’m not a doctor, I’ve never played one on TV(though I’d totally be down to!). I’m not a professional athlete or a personal trainer. These are just my observations and conclusions.

First, I followed the rules. Whose rules, I’m not sure, but there were a bunch of us following them just out of Springer. Keeping it slow and small. Single digits the first week, maybe a ten miler if you’re feeling frisky. Allow your body time to adjust to the stress from elevation and physical demands. Got it. There was an amoeba of us, maybe 30 or so hikers that started around the same time, leapfrogging back and forth. Sometimes gathering in community at a shelter or campsite, sometimes just cheering on each other as we passed one another along the way.

And then we got to the NOC.

As I sat on the bench outside the general store at the NOC, an ice cream in one hand and a beer in the other, just waiting on my bunk to be available, I observed a very distinct shift. All of the sudden, hikers by the handful came down into the NOC, but these weren’t the hikers I had been around. These were athletes in hiker clothing. Barely stopping for a few photos on the bridge or a quick lunch at the restaurant, these hikers were heading back out of the NOC that same day, a feat not in my cards, for sure. I chatted with a few of them, and heard the phrase I hoped to maybe eventually use myself: 20 miler. Really? Already? Later on I ended up hanging out with a gentleman who had been hiking with a group doing 26-30 miles a day. Right off the bat! I had a conversation with trail angel(but more importantly, my friend) Fresh Ground, about my pacing and how after those first couple days, I couldn’t seem to keep up with him anymore, to which he replied, ‘Well you were with my bubble, but then you took a zero.’ I had taken a day off to do some work on and rest an old calf injury that was starting to become an issue. Wasn’t I supposed to listen to my body? Wait, what happened to the rules?

Comparisons do indeed kill the spirit and could end your hike.

Ask my mom, I wanted everything my older brother had, and wanted to do everything he did. Maybe I’m a little competitive. Maybe I’m a little type A. Maybe I’m a hard headed Aries. Maybe all three, and then some. While I have a few half marathon medals hanging on my wall, I have no delusions about my running speed. But walking and hiking? I was under the impression that this was the wheelhouse in which I lived. Now I was surrounded by people who made the hard stuff look easy, and, well, I compared. And I pushed. Maybe, I thought, I was supposed to be going harder than I was? Even though my body was sore and the hiker shuffle a regular morning gait, I pushed harder. And I started paying the price. My joy was now determined by how I did compared to everyone around me. A good hiking day meant I got to camp around the same time as everyone else. I would race through downhills so I could catch the hikers that had passed me on the uphill. I barely stopped for breaks to eat, rehydrate, or stretch (bad Dandelion!)

In Appalachian Trials, Zach Davis provides templates to create lists, one being, ‘I am hiking the Appalachian Trail because…’. I felt a little lost, so I went back to my list. There it was, reason #2:

‘I have waited 25 years to focus just on myself.’

So what was I doing now? Anything but that.

First, back to Fresh Grounds’ comment. I did the right thing, listening and resting. The last several hundred miles would have been much more painful if I hadn’t. More importantly, my friend wasn’t making a judgement call, it was just a statement of fact. Don’t take it personally girlfriend. He’s still cheering you on.

Next, take an objective assessment of the hikers around you, but only for clarity, not competition. Face it, no matter how well you hike, chances are there is someone who is going to pass you doing more miles, a faster pace, or longer hours. And that is 1000% OK. Breathe. Say it again. Look into your itty bitty mirror on your folding hairbrush and say it one more time. Good? Now remember, some people are on time restraints. Some people have a longer stride, some people are pushing for FKTs, some have lighter packs, and then some are in better physical shape. Again, this is all 1000% OK.

I had another hiker ask me once if I thought I had my trail legs yet. It got me thinking about how I would define trail legs (I have similar musings regarding hiker hunger but that’s for another blog). Am I getting stronger? Absolutely. The miles that used to take me all day now get covered by lunch. I pause less on the climbs, though I maintain my super power of magically transforming into a snail made out of molasses. I am consistently doing bigger mileage, rather than being crippled or needing a zero after one big day. And most importantly, I’m able to get up and do it again without a lot of difficulty.

I have built strong legs, and I’m on trail, so I guess I’ve got my trail legs! Woo hoo!

Once I came to that realization, I started to enjoy trail my way a bit more. I still refuse to get out of camp until I have had my coffee, and if that means I finish a little later in the day, so be it. If I want to stop for a bit in the afternoon to escape the heat of the day, or to side quest off the trail for a cold orange soda, I do that too. Of course, there are still those days where I put my head down, throw a podcast into my headphones and just crank out the miles. But those days are done because I want them to, no external motivation necessary.

So what’s the best hiking pace? The one that leaves you looking forward to doing it again tomorrow. For me, that’s about setting my own goals, listening to my body, and going where the day leads. Besides, the last one to Katahdin wins! 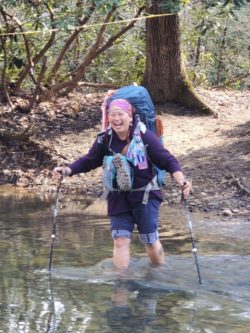 It’s smiles AND miles for me!