“So What’s Next?” Struggling with Imposter Syndrome After Thru-Hiking

Standing on top of Mount Katahdin, I knew that I was capable of anything. My legs burned, my chest heaved, but at the moment, standing atop of the northern terminus of the AT, I felt a surge of confidence I had never known. This feeling of pride swelled as I traversed the rocks on the descent inside Baxter State Park. 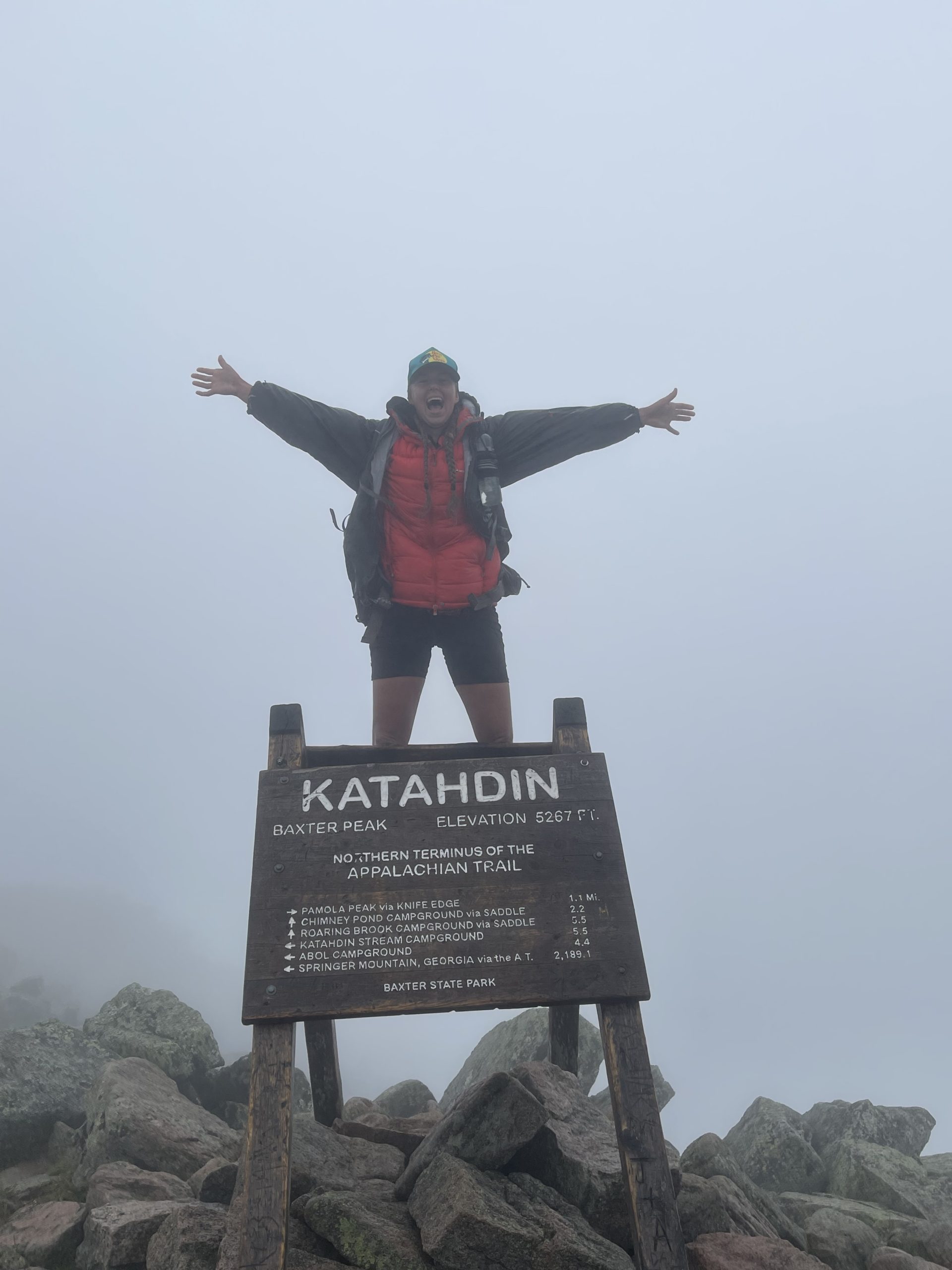 This wave of triumph continued over the next few days on my journey back to my home state of North Carolina. After hiking nearly 2,200 miles and living in the woods for almost six months, I was confident that I could tackle anything life threw at me. I felt cocky and entitled as I settled into my new identity as a thru-hiker.

One is Never Enough

After posting about my completion of the AT on Facebook, a new reality set in. Among the congratulations from friends and family came a resounding comment. “So, what’s next?” This same question was asked in person anytime someone learned about my recent hike, as well. “That’s so awesome, but what are you going to do now?”

I had just walked from Georgia to Maine. What did they mean, “what’s next?” Was this lifelong achievement not enough for the armchair adventurers who virtually followed along on my hike? Was this feat not satisfying enough for my dentist, the waiter at a swanky restaurant, or my grandmother? 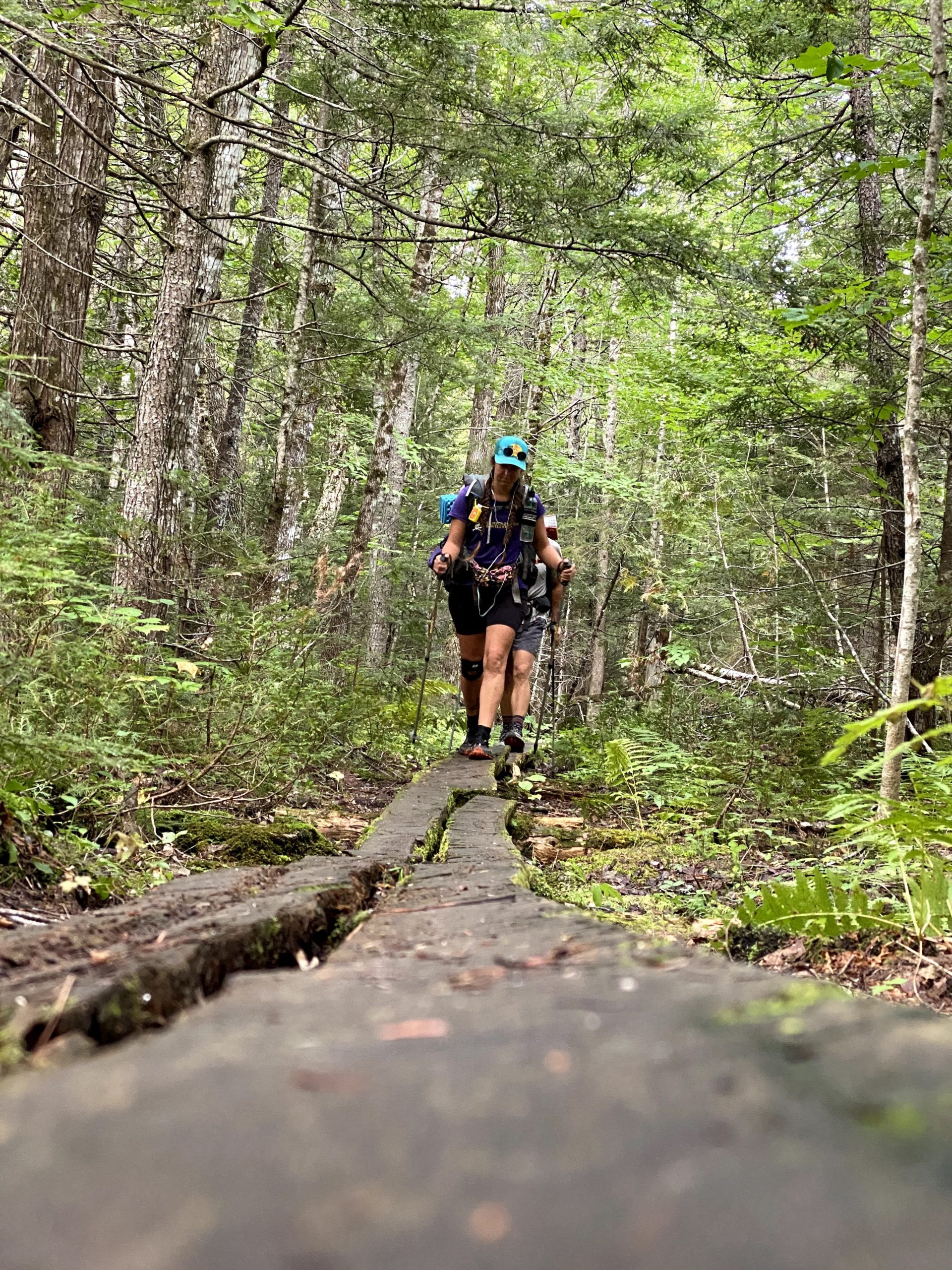 Chugging along down a boardwalk in Maine. Photo courtesy of Joshua “Gooey” Kay.

During my trek, I rediscovered who I was, connected with myself in ways I never imagined, and learned to find beauty in life’s everyday mundane adventures. Although I felt as though I had been bit by the fabled thru-hiking bug and wanted to check off another trail, I needed time and space away from the trail. I needed to relearn how to exist in the world outside of my tent and focus on preserving all that the trail taught me.

Looking for solace, I turned to other long-distance hikers on social media. Surely others have taken time to rest after completing a thru-hike? My hopes were dashed as I found post after post about what other trails thru-hikers planned to tackle. It seemed as though one thru-hike was never enough.

READ NEXT – Trail Science: Is Thru-Hiking an Addiction?

I quickly began to feel as though I no longer blended into the “real world” after living as a vagabond for several months, but with only one long-distance trail under my belt, I also didn’t feel like I had a place in the thru-hiker community. I had accomplished something that most people only dreamed of doing, and yet it seemed as though my credentials were still not enough to gain the title “dirtbag.”

What Makes Me Special?

Flashback to early 2021. I had been toying with the idea of thru-hiking for years, reading countless books and blogs about other people’s adventures on trail, and living vicariously through vlogs on YouTube. It wasn’t until I was laid off from work that I began to consider the possibility that maybe I could thru-hike after all. I told myself, if these other people can do it, why can’t I?

Once this idea was cemented into my head, I became my own worst critic. What makes me think I can accomplish something like this? My longest backpacking trip was three days long—how do I expect to live in the woods for six months? I was scared, skeptical, and doubted myself both physically and mentally. It wasn’t until I laid eyes on the Katahdin sign that I was able to silence those voices, but only momentarily. 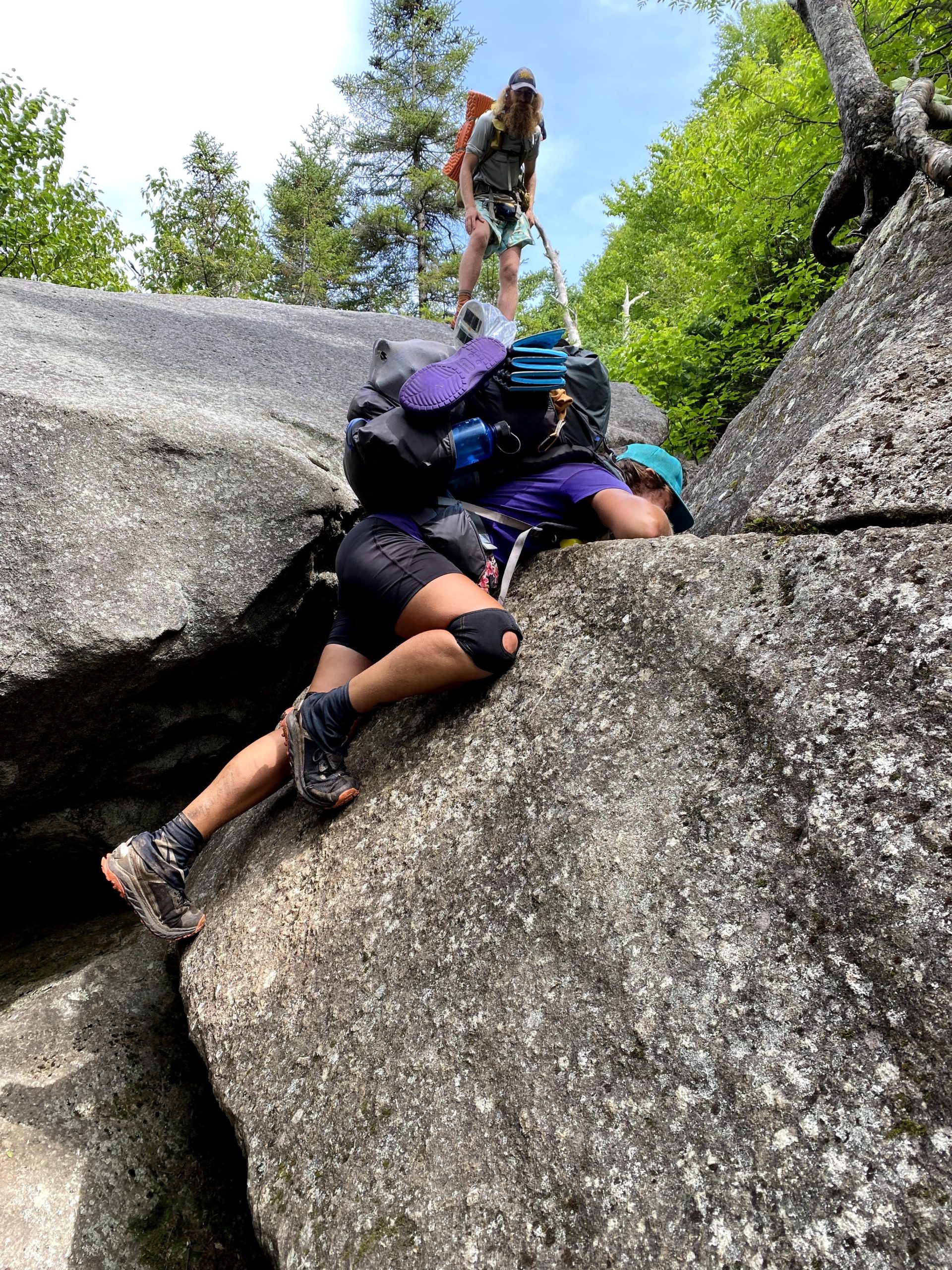 Perhaps I never doubted my physical ability more than when going through the infamous Mahoosuc Notch. Photo courtesy of Joshua “Gooey” Kay.

My Own Worst Enemy

On my journey north, I spent a lot of time reflecting on my self-talk. Why was it that despite being in the middle of proving to myself that I am capable of anything, I still felt as though I didn’t belong? After some Googling, I was able to label what I was feeling: Imposter Syndrome. “Imposter Syndrome… ​​involves feelings of self-doubt and personal incompetence that persist despite your education, experience, and accomplishments.”

READ NEXT – Post-Trail Depression: It’s Not What You Think

Here I was out here doing the damn thing, and yet I still felt like I was out of place. I worked tirelessly day in and day out, not only to cover miles but also to put those doubts to rest. My motivation for thru-hiking was to prove to myself that I could do hard things, and walking from Springer to Katahdin was HARD, but I did it. 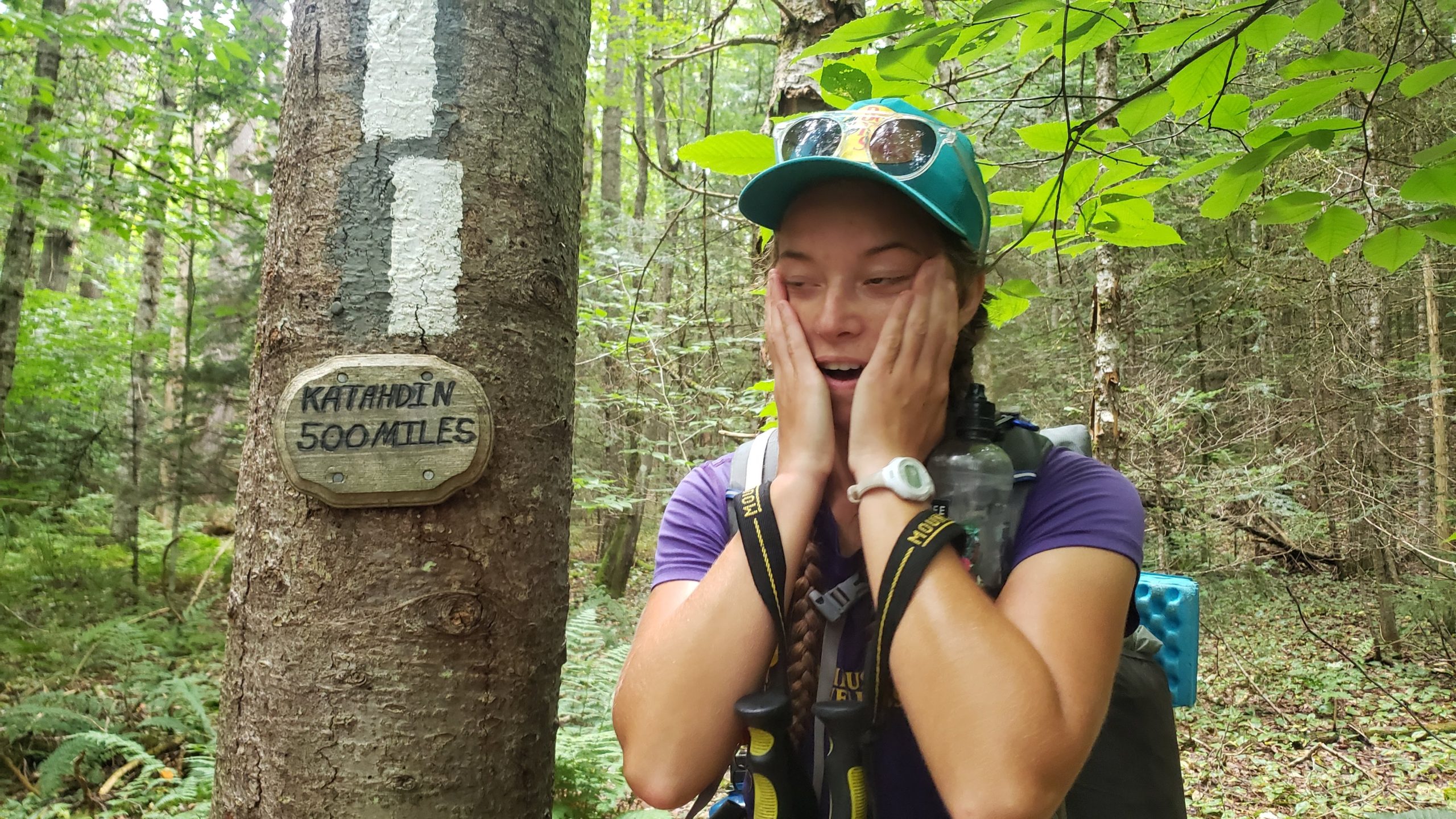 Crying in disbelief at being 500 miles from Katahdin and having hiked almost 1,700 miles. Photo courtesy of Cade “Truffles” Smith.

So why was it that after finishing my thru-hike that I still felt unaccomplished? I have found two culprits to blame: 1) social media and 2) dissatisfaction within myself.

I Hate You I Love You

It’s no secret that I have a rocky relationship with social media. When it comes to outdoor and hiking content, I get so much inspiration from other people in the thru-hiking community.

READ NEXT – Pics Or It Didn’t Happen: Is Social Media Ruining Thru-Hiking?

The problem I have found is that there is always more that can be done. More trails to blaze, more miles to cover, more peaks to bag. It’s as though we are dissatisfied with an experience and must constantly push ourselves to the next “once in a lifetime” adventure. I found myself questioning whether or not I actually belonged in thru-hiking culture because I have only done the AT. 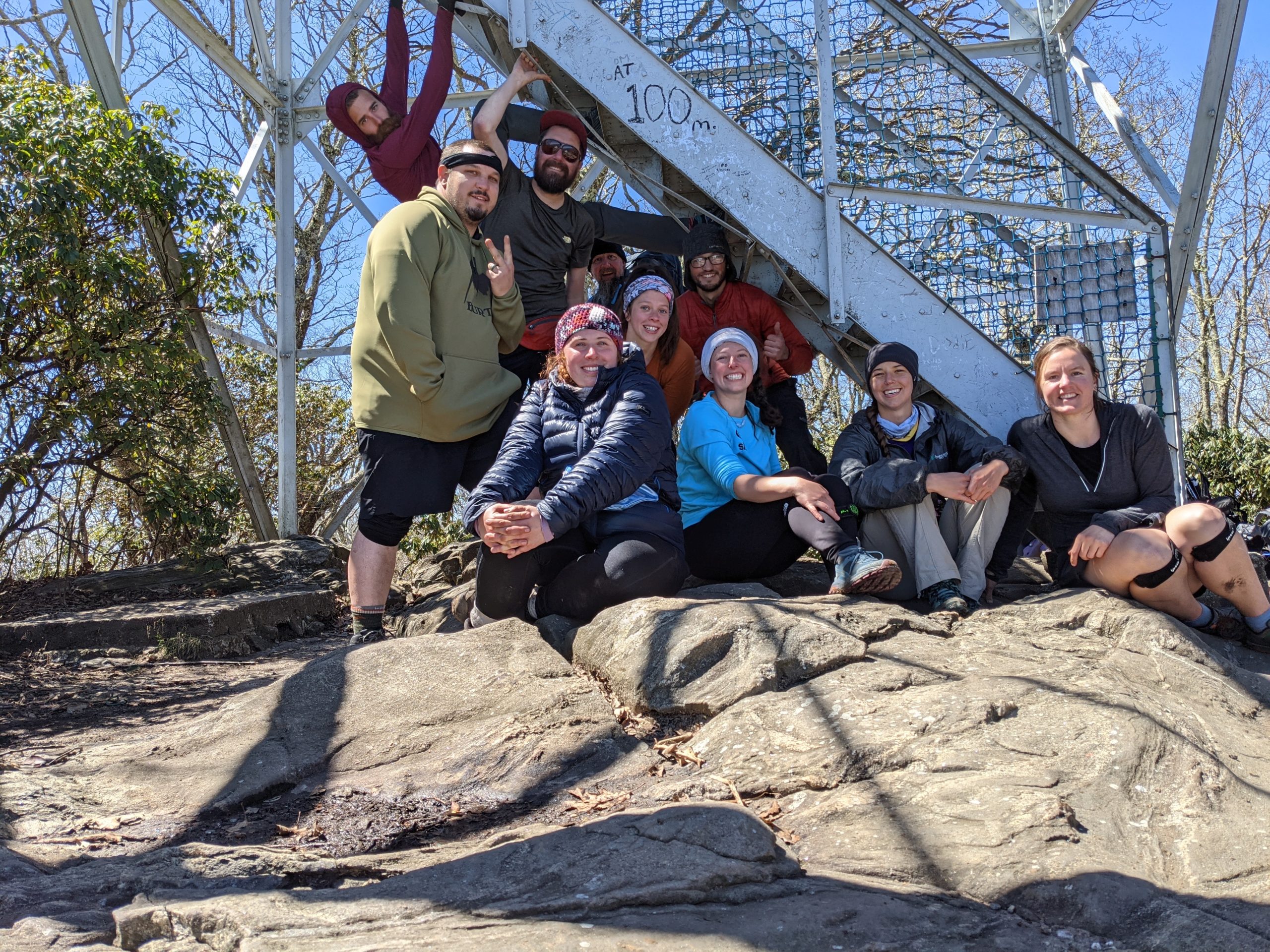 Feeling accomplished after the first 100 miles at Albert Mountain in NC. We still had so far to go, but this felt like a huge milestone! ​​Photo courtesy of Kayla “Bug Bite” Measell.

Only a Four-Letter Word

I have to stop myself at the word “only.” This is the secret I have found to combat imposter syndrome. “Only” implies that this accomplishment is not good enough, significant, or magnificent. I spent 169 days on trail trudging through snow, dodging bear scat, ducking under trees, sleeping in shelters, climbing mountains, and building lifelong friendships. A thru-hike is so much more than the miles walked or the views seen. It is the sense of comradery between hikers, a shared motive, a commonality that is unlike anything experienced elsewhere.

Comparison is the Thief of Joy

Sometimes when I find myself scrolling on other prominent hikers’ pages, I question if I am the same caliber as they are. It’s as though unless you are willing to compromise your comfortable lifestyle off-trail, such as by working multiple part-time jobs or by living in a van, you aren’t seen as a valid or serious hiker.

I think an important tool when it comes to silencing the voice of imposter syndrome is to stop comparing yourself to others. When I can take a step back and appreciate others’ accomplishments while also recognizing my own victories, I feel as though I can exist in my happiest and most harmonious state. 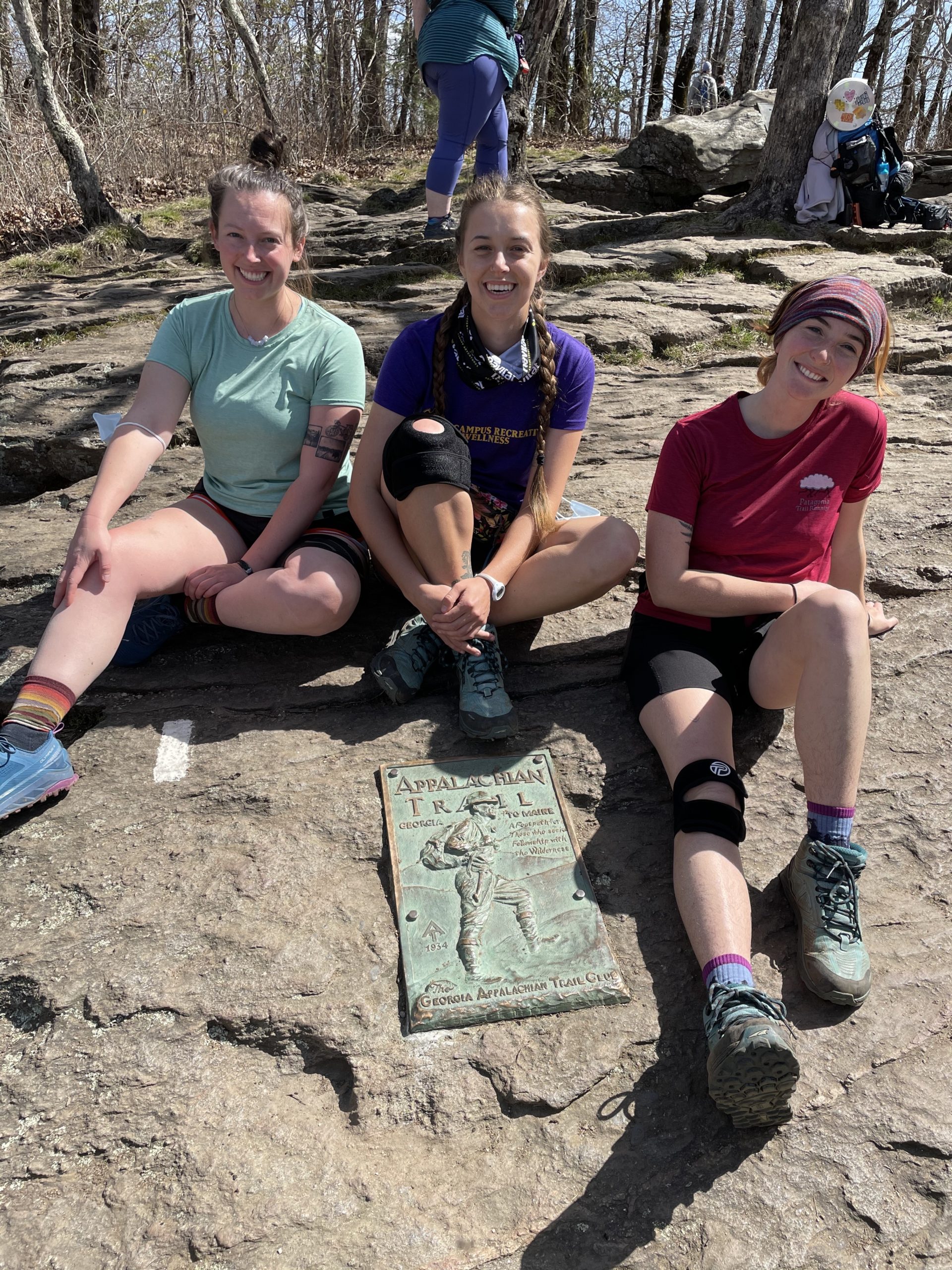 Three scared and inexperienced friends preparing to embark on a life-changing journey. Bug Bite, Magic, and Ranger. All three women walked the entire length of the AT. Photo courtesy of Kayla “Bug Bite” Measell.

Do You Have What It Takes?

I worked a traditional 9-5 for years, was laid off, thru-hiked, and am now back to being a weekend warrior while working full time. Is my experience less inspiring than someone who was willing/able to transform their life to hike full time?

No one else walked to Maine for me, I did that. No one else pitched my tent in the rain, scared bears out of camp, or charged up mountains during thunderstorms. Reminding myself of these things gives me the confidence to accept a sense of belonging. 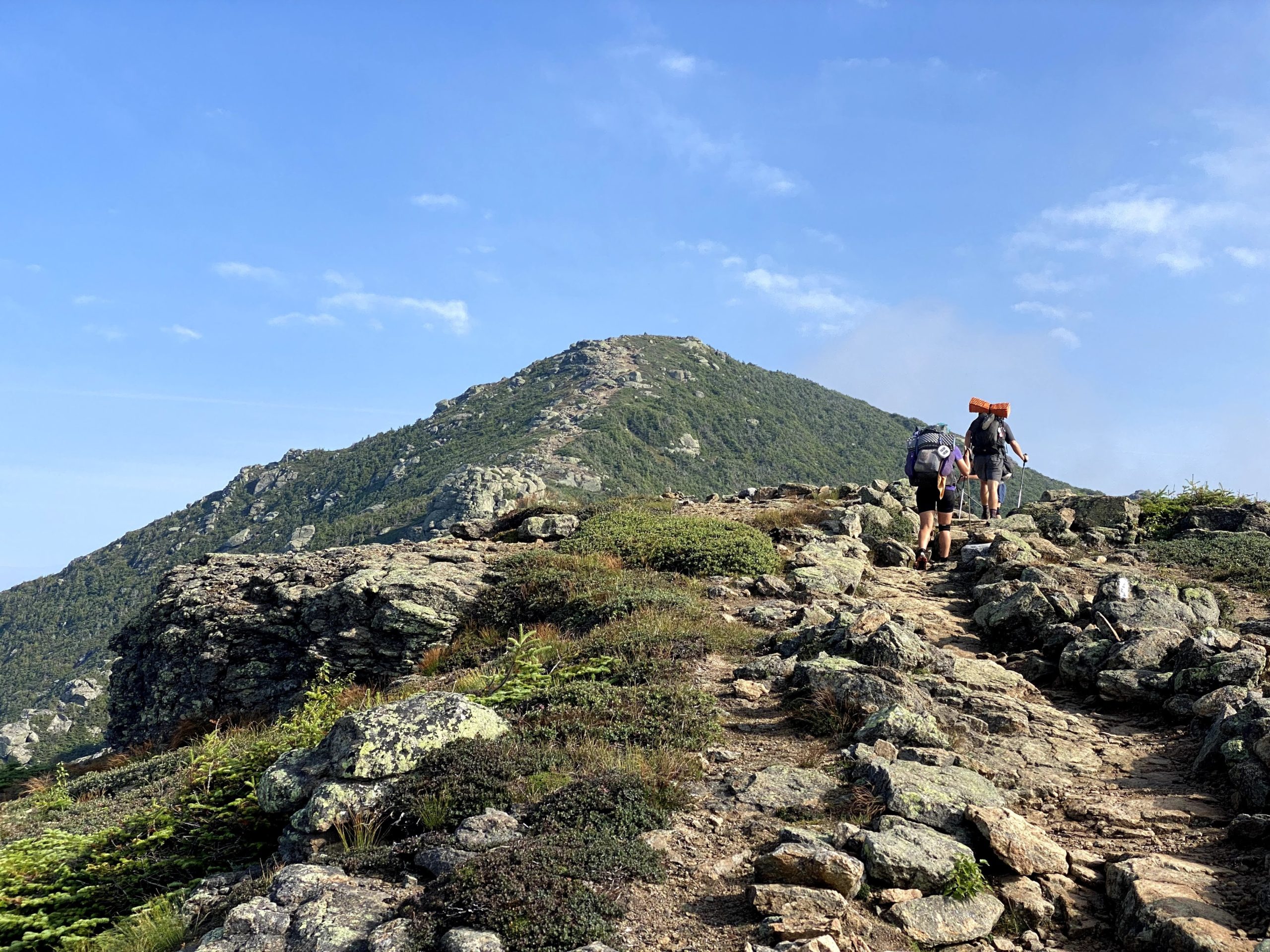 What Are You Going to Do?

So when someone asks you “what’s next,” how do you respond? Are you snarky in response, or do you discredit yourself by chalking it up as a fluke or some outlier?

My trail name is Magic, I thru-hiked the AT in 2021. I met so many incredible people on my journey from Georgia to Maine and fell in love with the culture of the trail. Shortly after completing my first long-distance trial, I began working as a hostel caretaker in NC. This brief seasonal position enabled me to stay close to the trail community and do plenty of my own trail magic. Now that I am once again working in "the real world", writing about my adventures on trail is the best way to feel connected to other hikers. Check out my personal blog, Magic in the Mountains, to read my daily trail journals.