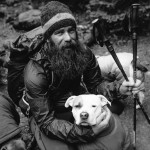 Are you even going on a thru-hike if you don’t post a gear list? And how will I know what gear other people hate if I don’t put it on the inter-webs for them to critique? Without further ado, I present to you part one of my Maine to Georgia gear list: My big three.

What is The Big Three?

Your big three is a backpacking term that refers to your biggest three purchases and the three setups that make up a majority of your base weight: shelter setup, sleep setup, and pack. They’re definitely your most costly purchases and an area where you can potentially gain, or shed, quite a bit of weight. They’re also like anything else in backpacking: very personal.

There’s no right or wrong way to put together your big three kit, and what works for me might not be a good fit for the next person, and that’s OK. The important thing is to remember that only you understand what your personal needs are and what gear makes you feel comfortable. I tend to take a more minimalist approach but that developed slowly over a long period of time, and what I need to feel comfortable in the backcountry might make the next guy or gal very uncomfortable. Don’t ever let anyone shame you for the gear you personally choose to carry.

With that being said, here’s my setup for my southbound attempt on the Appalachian Trail.

My shelter setup seems to be one of constant criticism and online debate; always from strangers and never expressed in a compassionate way. As I said in the opening paragraph, how can you know what gear you carry that other people hate if you don’t post it on the internet? My most-liked post on Instagram was also my most criticized, and in the end I had to delete at least a dozen comments that spawned nothing but negativity. And you know what it was a picture of? My dog sleeping in our tarp while on a three-day backpacking trip in the Blue Ridge Mountains of Virginia. 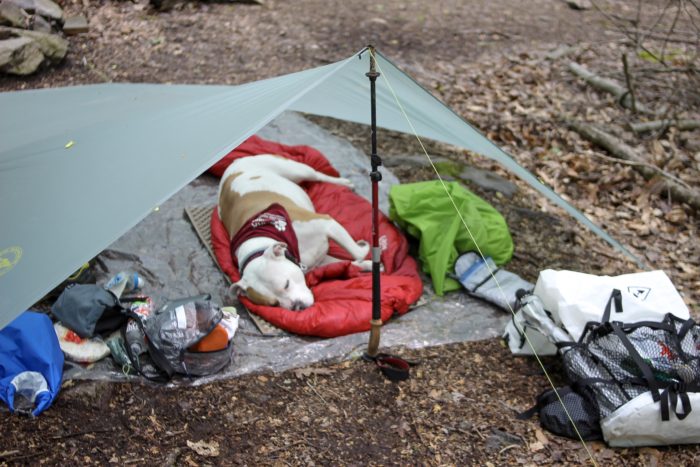 Winnie under our Onyx pitched for thunderstorms; you can also see our polycryo ground sheet under our sleeping bag

This is the Swiss Army Knife of tarps. It’s offered in a Dyneema Composite Fabric (formally Cuben Fiber)  set up, or, as I chose, Silnylon. My only regret with this tarp is I wish that I opted for the DCF instead of silnylon; silnylon tends to sag a bit when wet and will retain moisture much longer than DCF. With that being said, I have tested this setup in absolutely god awful conditions and have still come out on the other side dry, comfortable, and warm. I’ve been tarping for a few years now and have done numerous thrus and end-to-enders with some sort of tarp set up and couldn’t imagine backpacking any other way. 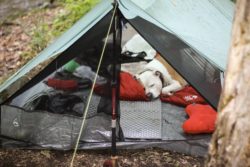 Winnie taking a snooze in the HMG Echo II Insert

I was super super concerned with ordering this insert. Will it work? Was it worth it? Will it be compatible with my Onyx UL?

The HMG Echo was designed to be compatible with other HMG tarps and when I purchased the Onyx UL I had no intention of ever adding a bug net/insert to my kit; then this winter happened in Maine.

As I write this the trails up Katahdin are still closed and most likely will be into mid June. Many places still have snow on the ground and a friend of mine who I met on the AT in 2016 who also moved up to Maine after her thru as a ridge runner told me the black flies and bugs still aren’t out due to the fact there’s still snow on the ground. <insert primordial scream>

As a tarper I can handle some bugs, but I’m not a sadist. It sounded like the situation up north was turning buggy so I made a move. I looked into inserts from other cottage companies, but ultimately I trust HMG. I have a ton of their stuff and have never regretted a single purchase from them. I knew I was taking a gamble that might not be compatible with the tarp I have and I knew I was spending quite a bit of money for something I would mail home after a couple of months but once it came in, man was I pleased. It makes me wish I had an HMG tarp. 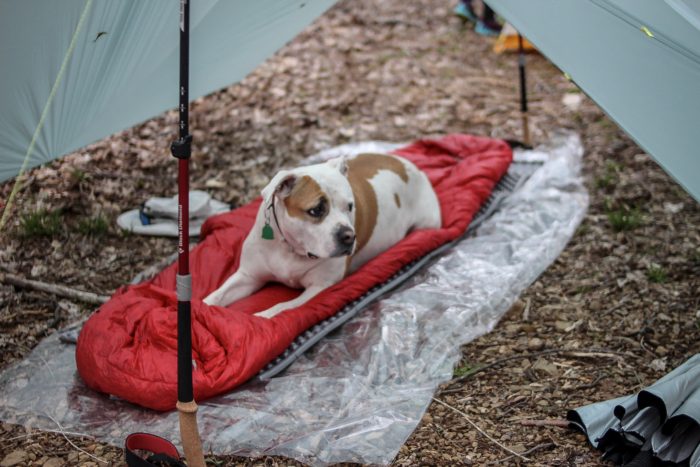 A while back I made the switch from Tyvek to polycryo. At first glance it looks cheap and frail , until you touch it! After making the switch I won’t use anything else as a ground sheet. It’s very not breathable which means 100% waterproof which is something I look for in a ground sheet as a tarper. After it’s retrieved from the ground after breaking camp down in the morning it is fairly wet underneath but on a clear day you can easily dry it out during second breakfast or during lunch. 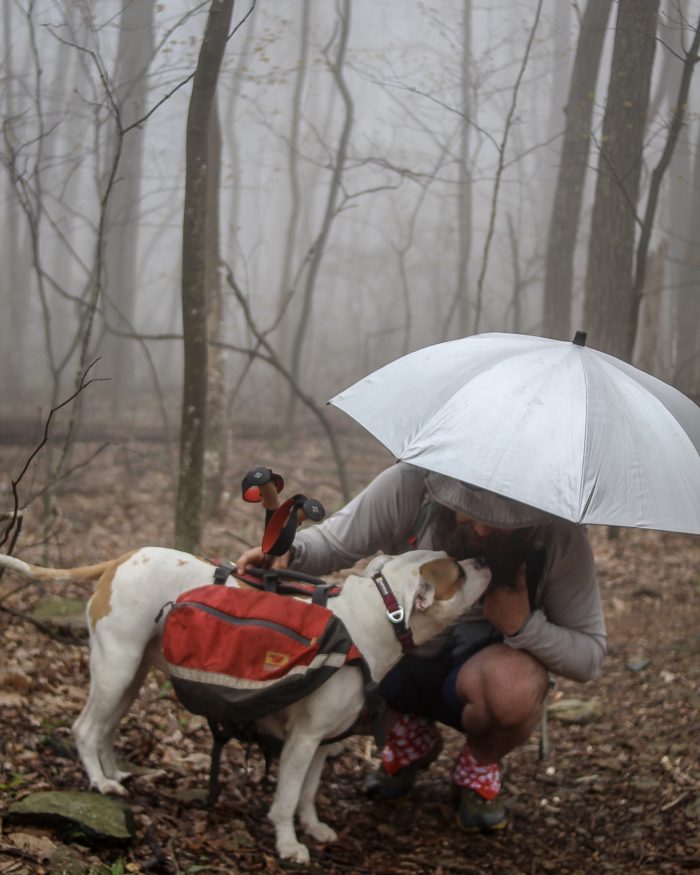 Yes, I’m an umbrella hiker, and I could write an entire blog post on the the multi-functionality  of backpacking with an umbrella, but for the sake of this post, it’s my tarp door. With no bug net insert it’s opened up just inside my tarp during inclimate weather, with the insert I’ve found that it’s best to pitch my tarp with the front trekking pole further away utilizing a clove hitch and setting up the Liteflex just outside of the tarp.

Pro tip if you wanna become a tarper: learn the clove hitch and the truckers hitch, only 2 knots you needs to know. 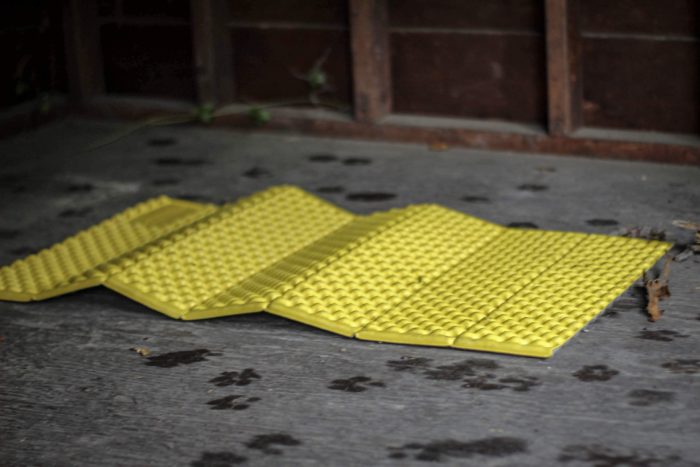 Pretty self-explanatory; accordion style foam sleeping pad cut in half to insulate from my hips to my shoulders. If I need something under my legs I use my pack and if I need to insulate my legs then my feet go in my pack. I’ve used this setup down to around 5° and slept about as comfortably as one would in temps that cold.

I should also note that I’m a warm sleeper. 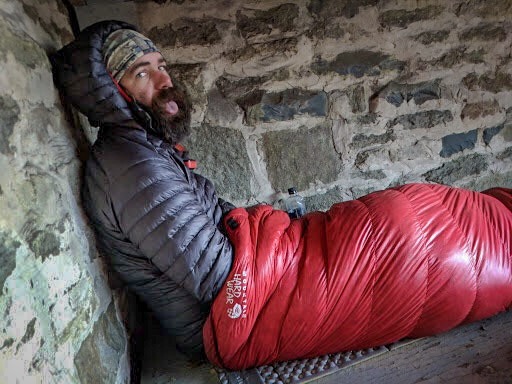 The Phantom Spark 28, also, if you can believe it, there’s a 70 pound pupper in there between my legs

No, I’m not carrying two sleeping bags. For the first half of my hike I will be utilizing the Everlite, a 45° quilt/sleeping bag hybrid made by Western Mountaineering. Around Septemberish when I mail home my Echo Insert I will also be mailing home my Everlite and swapping out for the Phantom Spark 28 which is a mummy-style 28° bag by Mountain Hardwear which is regrettably no long available. 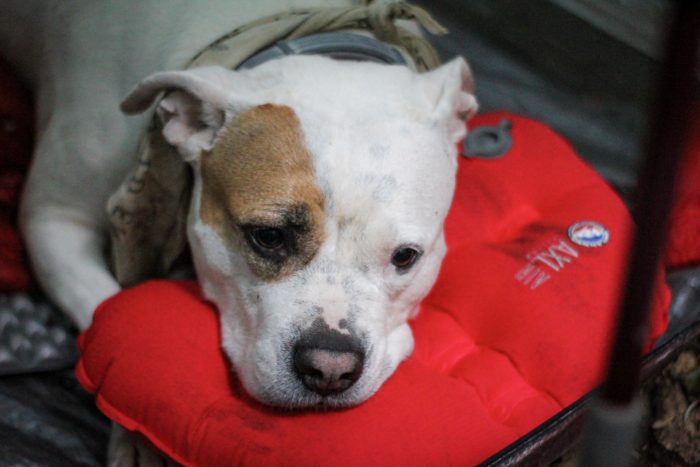 Winnie using our Big Agnes AXL Air pillow. I place it on my camp shoes for added support and a wonderful nights sleep.

I used to poke fun of people that carried a pillow until I switched to the darkside and began carrying one. At 1.6 oz tell me I’m wrong. 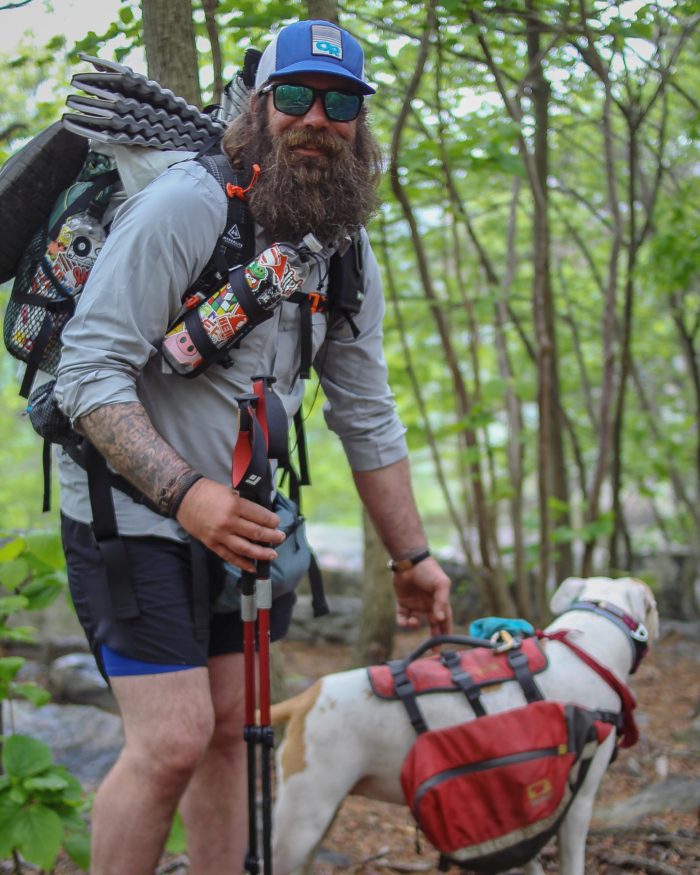 Me and “The Freds” with a Windrider strapped to my back

What can I say about this pack that hasn’t already been said? Bomb proof design, highly highly water resistant, to the point it’s almost water proof, I can carry 40L of supplies or 55L, and with the roll top enclosure it all carried the same. My only regret with this pack is that I didn’t buy this pack way sooner.

Generally I just stuff my sleeping bag and clothes inside my pack liner and loosely stuff it into the bottom of my pack, but in the event of inclimate weather I have the option of ensuring all of my gear is in a water tight vessel.

I didn’t know how to properly end this article so I just created another sub-section. For those of you who have been following us for a while, hopefully this answers what I carry, for those of you just joining us, I hope it offers some insight. Up next, what clothing, rain gear, gloves, hat, et cetera I’ll be carrying; well researched and tested on my end, most likely well critiqued on yours 🙂

Hiker trash rescued by a rescue dog. I really like long walks with my dog, mayo on everything, and will be southbound thru hiking the AT this year.