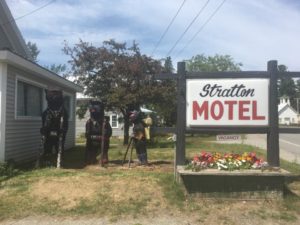 The floor I slept on in Stratton was in a screened in porch that mosquitoes had managed to get through so I didn’t sleep well.  It took a long time for me to prepare and I wasn’t hiking until 1130.  The mountain air and exercise had me feeling better.  It wasn’t a steep climb and I was doing well until a NOBO said I was almost to the top when I was still a mile away.  There were no views at 4200 feet and wondered why the AT was on this mountain (a pretty constant question on the trail).  The downhill was super steep and a slight drizzle made everything slippery.  I got to camp pretty late and I ended up eating in the dark.  This was just the start of what I would consider would be some of the most challenging parts in Maine.
Sugarloaf 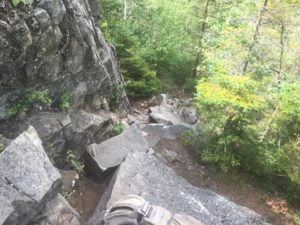 Where pringles were lost

The next day I crossed the stream and headed up sugarloaf mountain.  The trail doesn’t go to the top, it just climbs up most of the way and then offers a half mile side trail going to the top (which I wasn’t going to do).  It was one of the steepest climbs I’ve encountered and I struggled.  I even took my pack off to slide up a rock at one point until realizing the trail went around said rock. A few Pringles were lost in the struggle.  I was not a happy camper at the top and almost took a nap in the sun.  The rest of the day the hiking was mild for once.  I stopped to make a 200 mile marker for the SOBOs and then chilled at a shelter chatting with some new friends.  I left hoping they’d catch me at the river I was headed too but I stopped shortly to camp on a gravel road.  An older man named Rollin was camped there too.  He offered me and a NOBO some potatoes and jerky which I happily accepted.  I had not packed enough food (Pringles do not last) for this last stretch and any extra would help me.
Saddleback 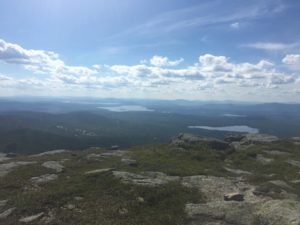 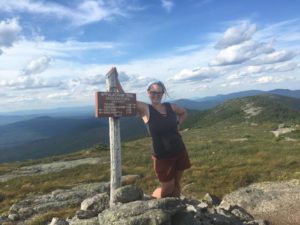 Rollin woke before me and was out of camp as I ate my breakfast.  I would cross paths with him several times that day.  I got to a stream where I iced my ankles in an effort to make them feel better.  There was  a long uphill but I went slow and steady and got to the shelter feeling pretty good.  There, another hiker cooked Rollin and I some bacon.  I walked another mile and than loaded up on water to get through the Saddlebacks (there would be a dry stretch).  Saddleback Junior wasn’t too hard of a climb and from on top I could see the pathway I’d be taking shortly up the horn and then to Saddleback Mountain.  There was a quick loss of elevation and then a extremely sharp climb including some scrambles.  At the top of the horn I was above tree line again and could see the rock face going down and then up the next mountain with many boulders strewn around.  It was different walking above the tree line and I could see Rollin just ahead of me.  I saw the first person I recognized from my North bound section (a lot of familiar faces would be popping up shortly) and then reached the top and sighed a relief that it was all downhill from there.  There were blueberries on the downhill and I went slowly because I was having some really bad chafing.  I got to the pond where I would stealth camp (Eddy Pond).  It was lovely and I cooked dinner right beside the lake that night so I could watch the sunset and the colors reflect back from the water. 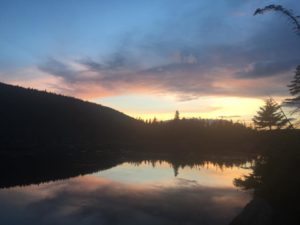 Rangley
I was headed to Rangley the next day.  The good thing about Maine is there is a town every thirty miles.  My ankle was bothering me a lot that morning as we trudged down the hill and waiting for a hitch to town.  Along the hike down I saw a sign pointing out some caves and went to go look.  There were blue blazes going through some boulders and it looked fun but after climbing through one it got dark so I decided to play it safe and not do it alone.  I’d made reservations at the Farmhouse Inn and was thinking of taking a day off trail.  I grabbed a bunk and then headed to town to grab some lunch.  I ended up hitting up the grocery store as well but I didn’t really know what I needed so I bought too much food.  Many of my friends were at the farm house including Owen, Breezy, Journey, these two cousins I’d been walking with (Hard Ass and Duke), and some new people I’d soon get to know.  We cooked up some burgers, watched a few movies, and then headed to bed late.
Zero it up
I decided to heal up the next day.  A guy named Horse Show made eggs for breakfast and was instantly my friend for the day.  We watched some tv until we had to leave the bunk house because a guest had privately rented it for the whole weekend.  We went to eat lunch, swim at the lake, buy some beer, and chill out.  It wasn’t a productive day but it was a day I needed.  The spicy Thai food may of been a bad choice that night but it was delicious and I went to sleep quite happy.
Falling
A heavy dew had settled in the morning and I rushed to pack and dry my stuff.  My stomach was upset from the food the night before and once I was back on trail I sat in the forest for sometime until I felt better.  I ran into a couple day hiking and joined them for the company until they turned back.  I ate lunch near a pond then headed on.  I fell 3 times that afternoon and felt a little beat up by the end of it.  I ended up at a shelter with some NOBOs and saw two hikers that I had seen in Virginia.  I was filtering my water when my filter bag popped a hole and stopped working well.  It just added to my grumpiness and after dinner I went to bed immediately hoping for a better day.
Chill in the Woods
The next day was better but I didn’t feel like hiking that much.  I texted my mom to send me a new filter and rested a lot avoiding the hill I would have to climb.  There was a nice view of a large lake from the highway I crossed and when I got to the last water source it took extra time to filter water with my faulty system.  At that point I heard there was trail magic ahead and I saw the friendly face of Mary Poppins at the camp right next to the river.  Camping near a friend and trail magic sounded a lot better than going to a shelter with no water so I called it a day.  We went up to the road where I ate a burger and they had fresh picked blueberries.  Then we relaxed and three more girls and one guy eventually showed up.  We made a camp fire and we sat around enjoying the night.
Blueberry Heaven 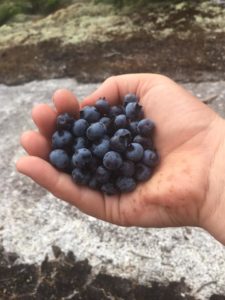 There was quite a climb the next morning and nearly ar the top I discovered that the mountain I was climbing was loaded with blueberries.  I would be missing my annual blueberry picking at my cabin so I dropped my pack, decided my filter bag would be my container until my water bottle was free, and started picking.  The berries are low on the ground on the mountains but some were still very plump and delicious.  I had planned to do more miles and zero in town but I had plenty of food to get me to Andover and I really love blueberries.  I spent an hour picking and enjoying the mountain before heading to lunch at the shelter.  I ran into Mary Poppins and we planned to camp together later.  It started to drizzle as I waited for Mary Poppins at the summit.  We walked together and filled up water at a nice spring which everyone else had referred to as a mud puddle.  We found a stealth spot for a tent and a hammock and cooked on the trail that night!
Andover
The sun was out and the sky was blue the next morning.  I put some sugar packets in my blueberries and the them right out of my water bottle for breakfast.   While I was walking I checked for other camping spots and was glad we had picked the spot we had because I saw nothing.  I got to the top of Old Blue and unfortunately there wasn’t a view and there were some negative vibes from others on top that got to me.  My father said I shouldn’t listen to negative people and I honestly think that’s the best advice he could of given me.  I wandered down to the road where I was picked up by the first car that passed.  I got a bed at the hostel and organized my food.  I was chilling when a man there offered me his leftover pizza and a beer so I didn’t have to buy dinner that night.  It was nice to have a bed but it felt weird that this would be my last town in Maine that I stopped at.  I may of been going slow this week because I was procrastinating for a reason.  I’ve had a love/hate relationship with the trail in Maine and I don’t think I was ready to leave quite yet!
< Previous Post
Next Post >