In case I forgot to mention, my zero day in Gorham was amazing. I relaxed and hung out in coffee shops, and watched a silly Chinese movie at the hostel. I also reconnected with my friends in the ‘Amoeba’ tramily, who had come in from Pinkham Notch a day’s hike behind. We all had dinner at an Italian restaurant that was slightly too fancy, and it was so nice to just be part of a group laughing and having a good time.

But as always, I’m hiking my own hike, and now some of the ‘Amoebites’ are ahead of me and some are behind. The real speedsters have a plan to finish by July 20, pulling a sixty-mile day in the hundred-mile wilderness. (Bididit, if you pull this off, I want to hear all about it!!) I last saw them when they passed me by as I was camped at the last pond in New Hampshire. 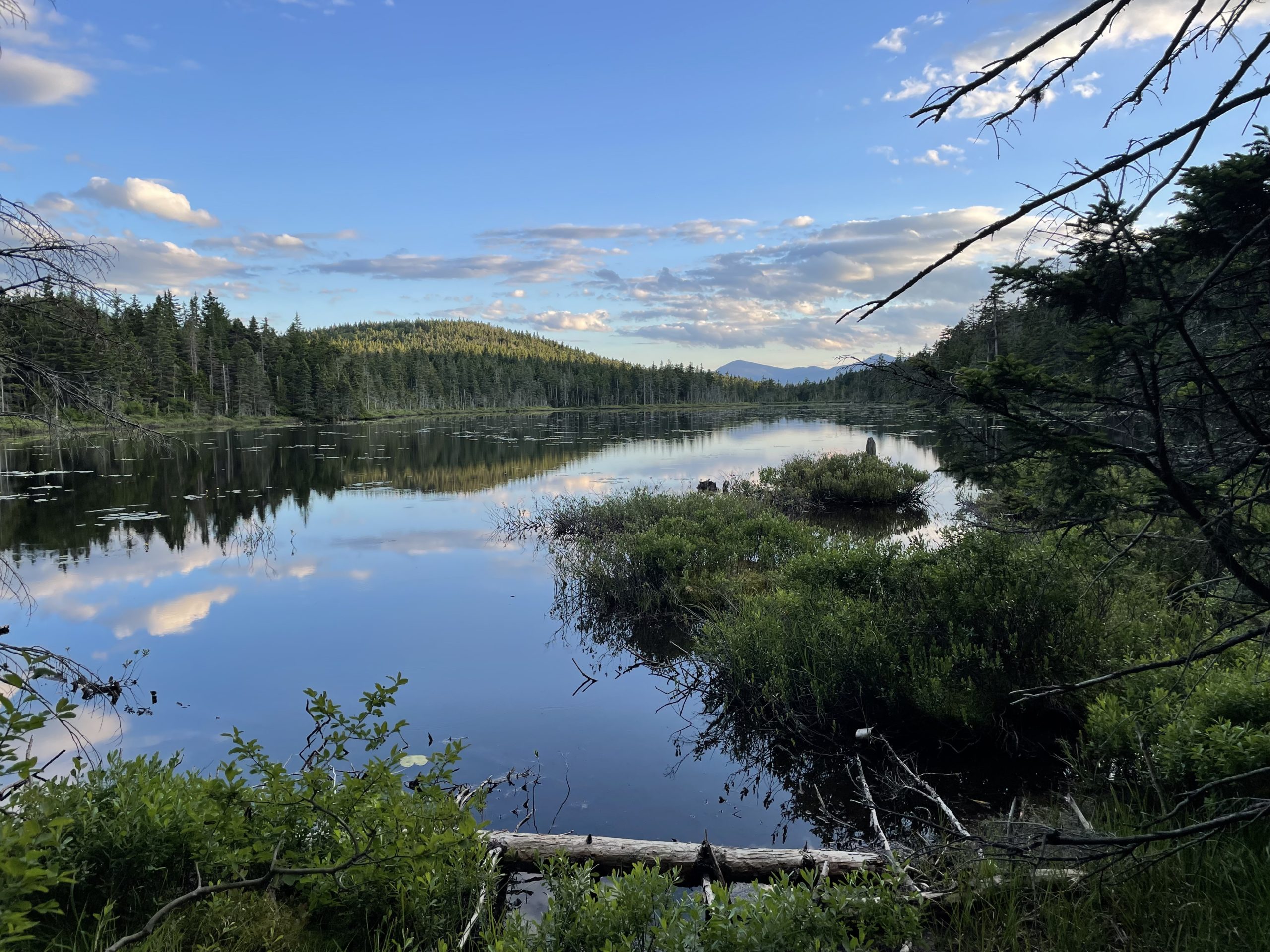 Sunset at Dream Lake, the last pond in New Hampshire.

That was my first night out of Gorham, and I was still feeling fresh. I’d climbed up into the Mahoosuc Range just after noon, and was ready for Maine. There’d been a few rock scrambles, but the ascent was mostly manageable — there had even been some sections that felt like a real trail! The summits were lower here but open, with magnificent views back west to the high peaks.

The next day is when things got rough. The Mahoosucs may be lower than the Whites, but they’re just as rugged. The climbs are rocky scrambles with ladders and rungs and cliffs, and the ridgetop is covered in open alpine bogs full of deep, wet mud. Bog boards were few and far between, so some of these mud pits took real effort to skirt around. 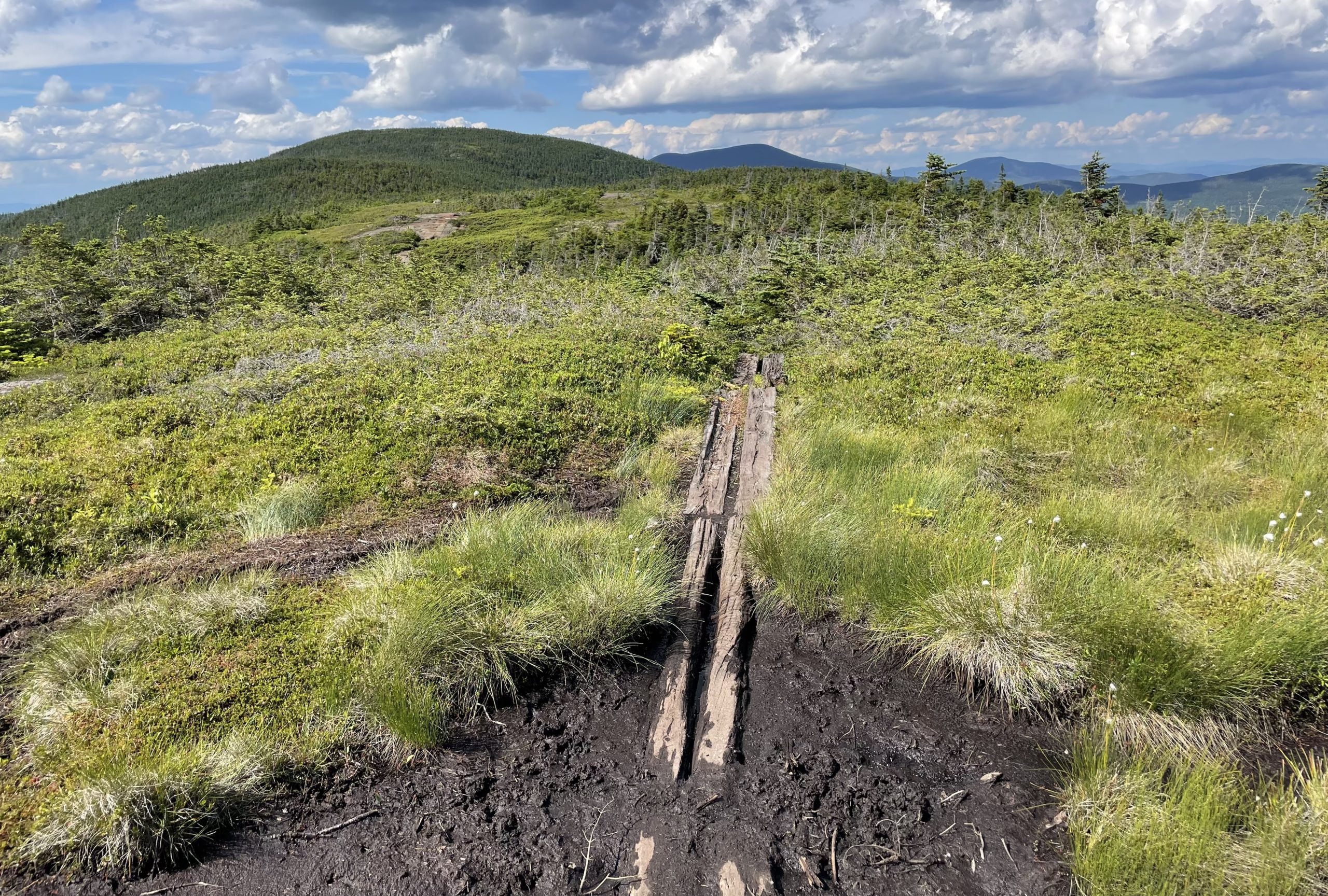 A bog on Mount Success.

The landscape is beautifully unique, though. Peat, spruce, and sheep laurel mingle with alpine flowers on the open face of the mountain, rocks jutting out and wooded peaks rising gently in the distance. There is nothing barren about this scene, even though you can see for miles around.

I crossed into Maine between Mount Success and Goose Eye. This was it: the last state line, the beginning of the end. I might have 282 miles left to walk, but as of this point, I had already walked to Maine.

I sat and contemplated that for a moment. 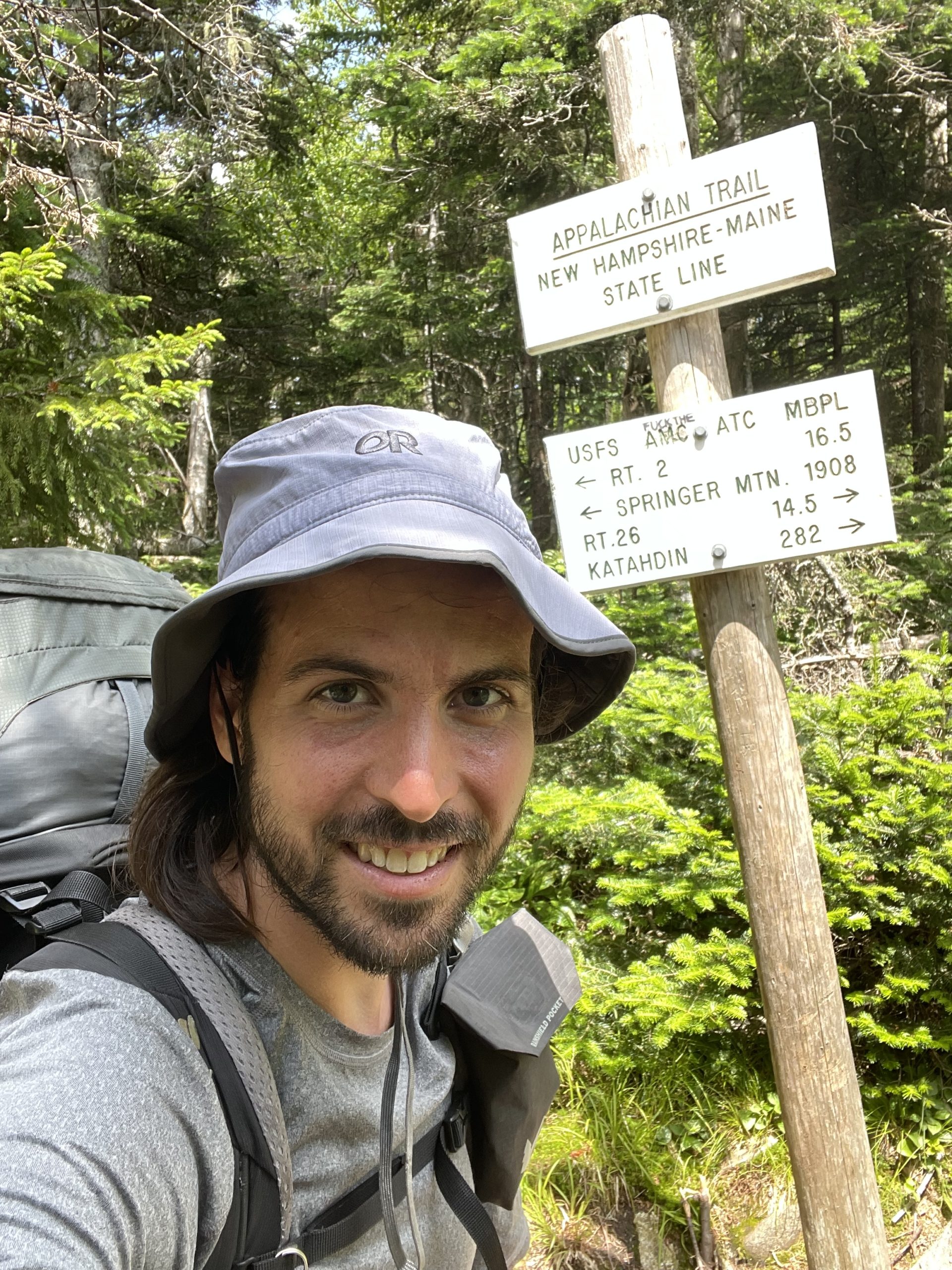 Then I pushed on, slowly and carefully picking my way across the soggy mountaintops, watching the Presidentials recede gradually towards the horizon as the day progressed.

I kept running into Southbounders, too. The trickle in the Whites has become a flood, all these fresh faces pouring down from Katahdin.  They warned me about hazards ahead, nasty bogs and dried-up springs and dangerous hawks. Towards evening, I was warned that Mahoosuc Notch was just ahead, and there was no way I was getting through in less than two hours.

I wasn’t sure about that, but, I told them, I was determined to pass through the notch and would camp on the other side.

The trail wound downhill and eventually came to a trail junction in a deep valley. The signboard read, ‘Mahoosuc Notch.’ I took a deep breath, tightened my shoes, packed up my poles, cleared my mind, and walked on in. 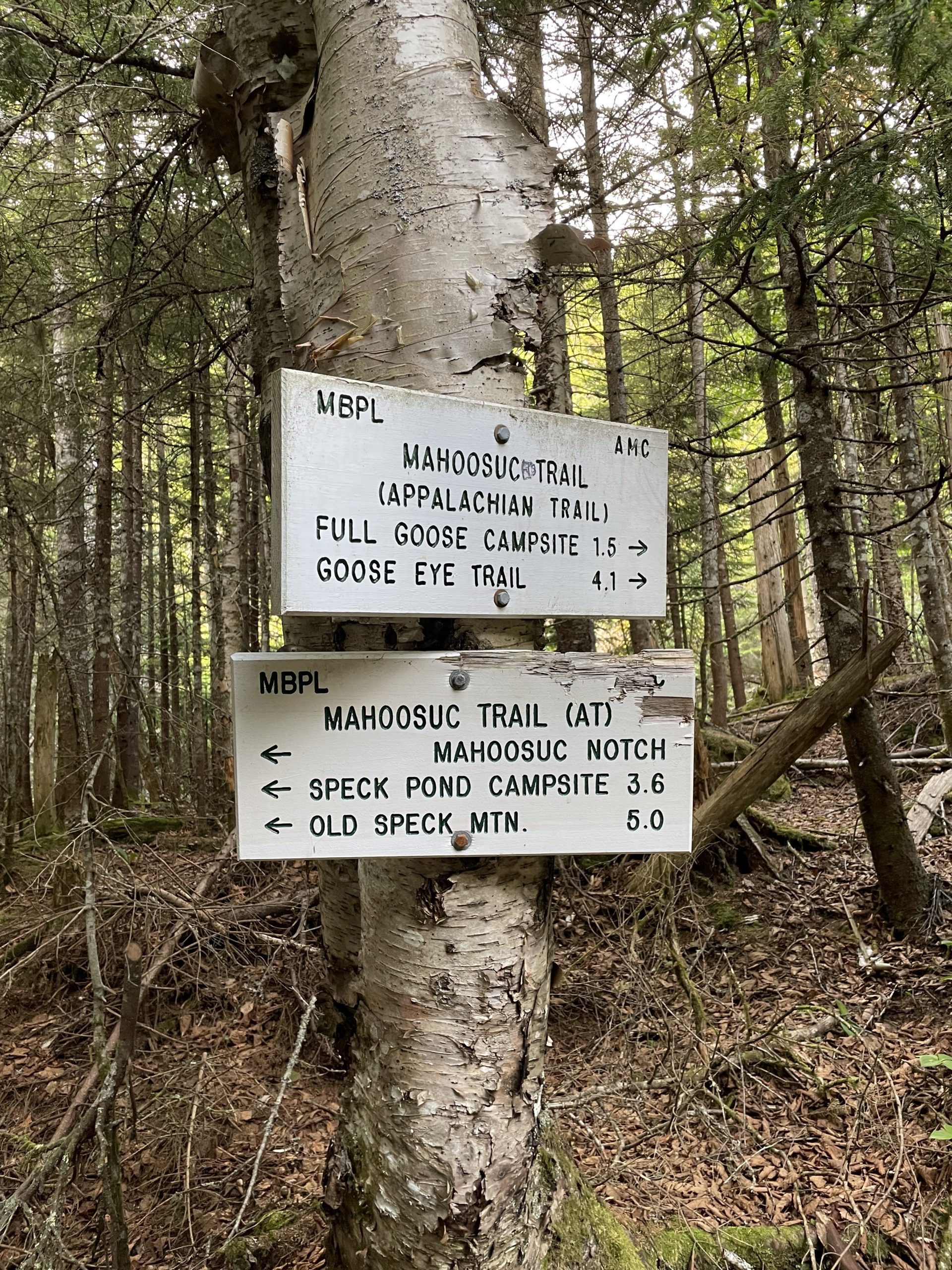 Mahoosuc Notch is a deep trench between two mountains, its floor piled high with house-sized boulders. There is no way around these boulders — the only way is through them. The result is a mile of ‘trail’ that cannot be walked, only climbed. 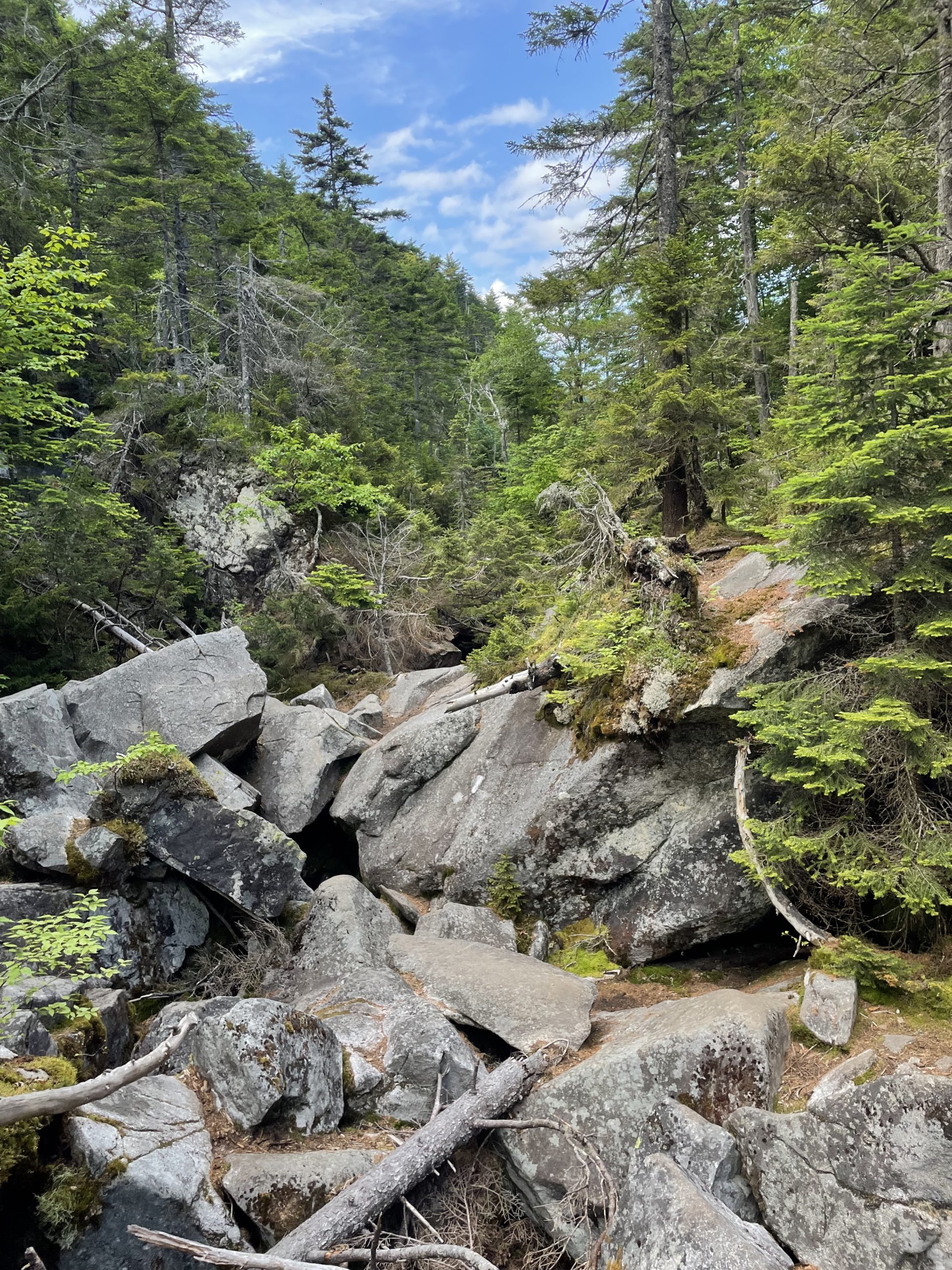 As soon as the cliff walls closed in around me and the first boulders appeared, I felt a blast of cold air surround me. Perhaps the weirdest thing about Mahoosuc Notch is that winter never leaves. I looked down a crevice and saw ice ten feet below. There’s just not enough sun to melt the snow, too many deep places for it to hide, awaiting the return of the cold season. 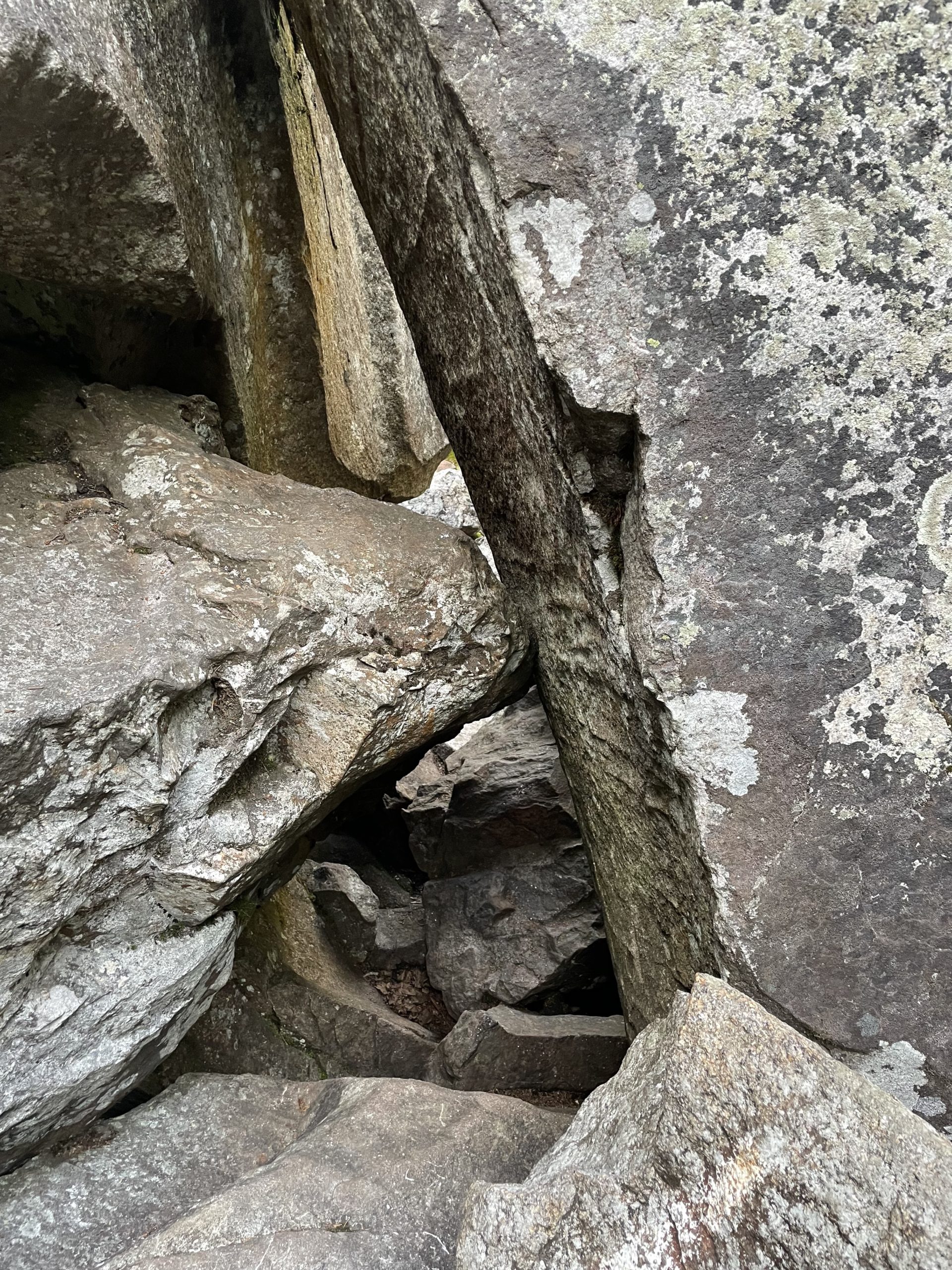 I tried not to think about my progress as I started the climb. I just thought about traction and balance and which rocks had fingerholds, hopping and clambering from one huge block of stone to the next. Sometimes I skirted around on tree roots and soil, where the trail wound up high enough that plants had set in above the rocks. It was warmer up there.

But then the route would jump back down again, and in a few places, white arrows ominously pointed to a dark space beneath a rock. Then I’d have to take off my pack and crawl. Those were my least favorite spots, pulling my heavy backpack through a crevice behind me, my poles scraping on the bare rock as I hoisted it up. I only had to do that three times. 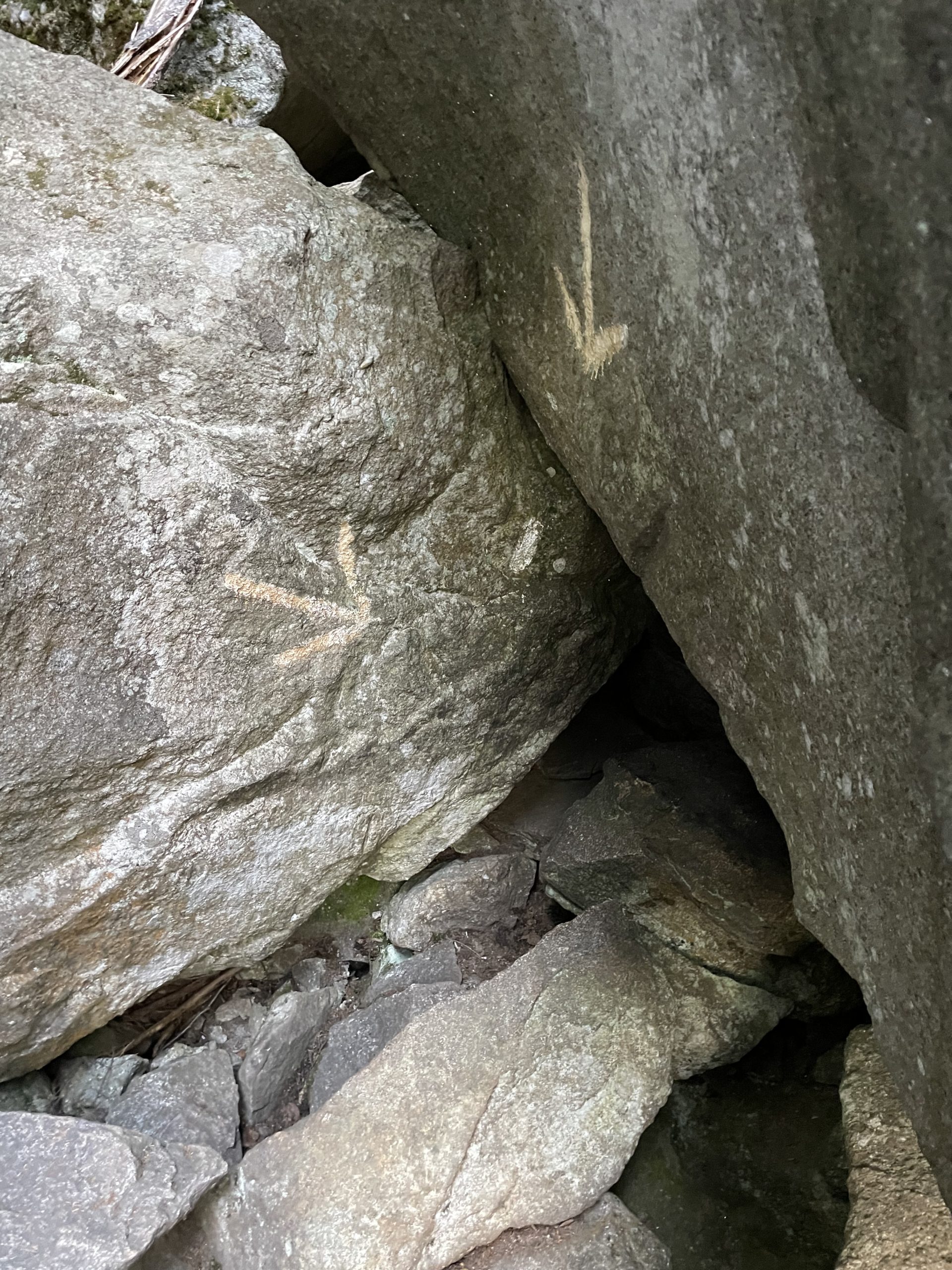 The trail goes this way!

Though I mostly kept my focus and balance and didn’t do anything rash, I did have some scary moments among the stones. I slipped twice and caught myself both times, and once I found myself standing on one leg desperately adjusting my weight on an overextended knee. But thankfully, no strain turned into a break, no slip turned into a fall.

About halfway through, when time seemed to have melted into an eternity, I began to hear a soft trickle of water deep below. It grew and turned into a rush, and when I finally emerged on the other side into the warm air I saw a stream beside me. I was through. 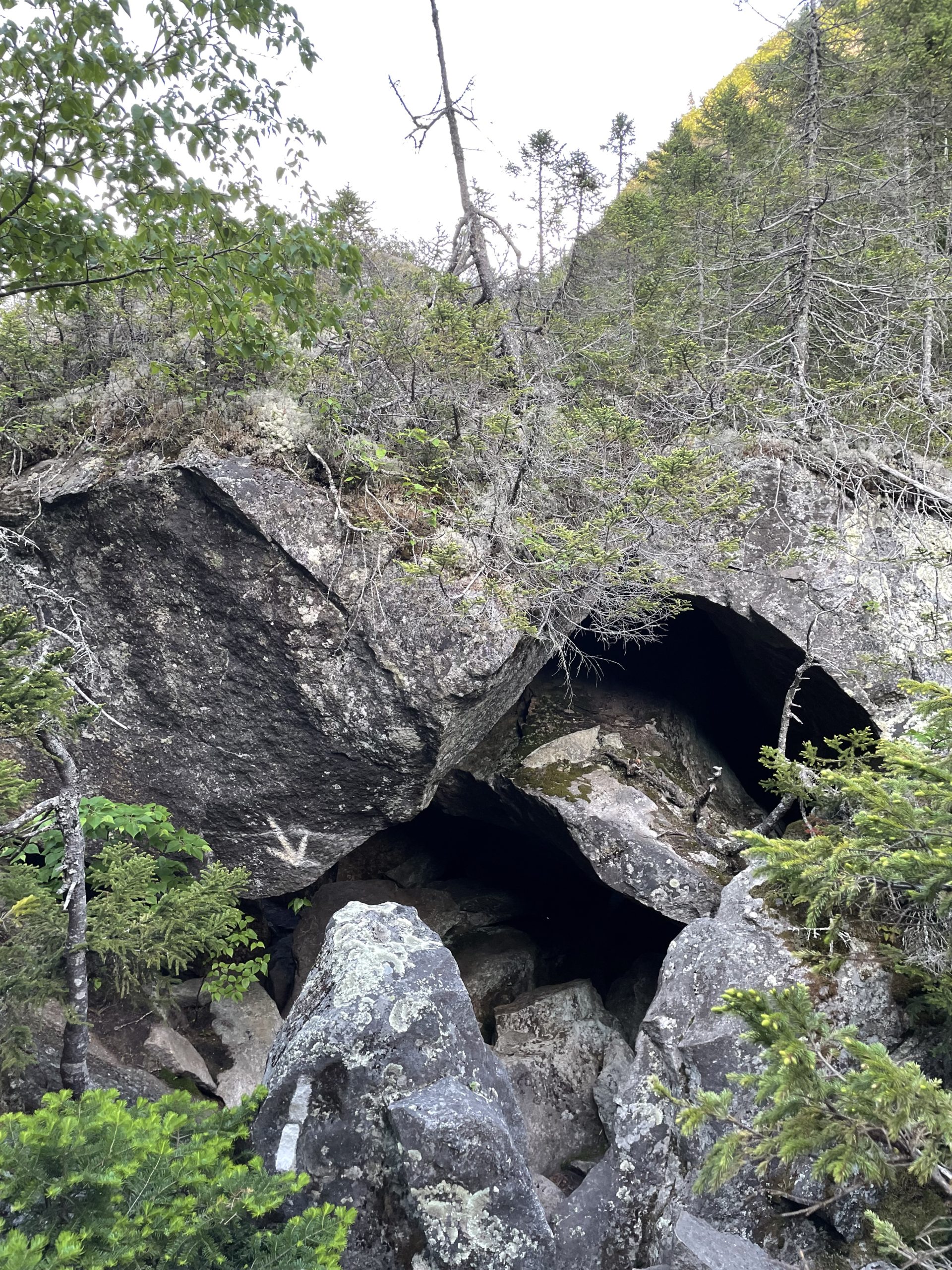 I knew I still had a long way to go, but the Notch felt like a final ordeal. It was an otherwordly, dangerous place like nothing else along the trail. With its blast of ice and subterranean topography, you could almost imagine it as the gates of the underworld. And I was through.

The journey had taken me just over an hour (1:08 to be exact). As usual, I was on the quicker side, but by no means the fastest. And I’d had no need to worry about needing two hours. In the still-plentiful light of early evening, I set up camp and went to bed.

That night, I witnessed one of the strangest things I’ve seen in nature. When I woke up around midnight, I saw a faint glow coming from just outside my tent, a thin filament of greenish light. It was coming, I discovered, from a tree root.

The bioluminescent root didn’t photograph well, so you won’t find a picture of it here. My best guess is that it was some kind of fungus living in the plant, visible where a patch of bark had worn away. So one little line of glowing tissue was exposed inside this birch root, shining a ghostly light inside my tent.

Or maybe there’s another explanation, I don’t know.

The next day gave me no rest from the technical, steep trail. I started with a long climb up Mahoosuc Arm, which I was glad not to have had to walk the night before. The terrain rose two thousand feet and then continued up towards Old Speck, one of the highest mountains in Maine. Old Speck was wooded on top, but had a fire tower on the summit with commanding views. 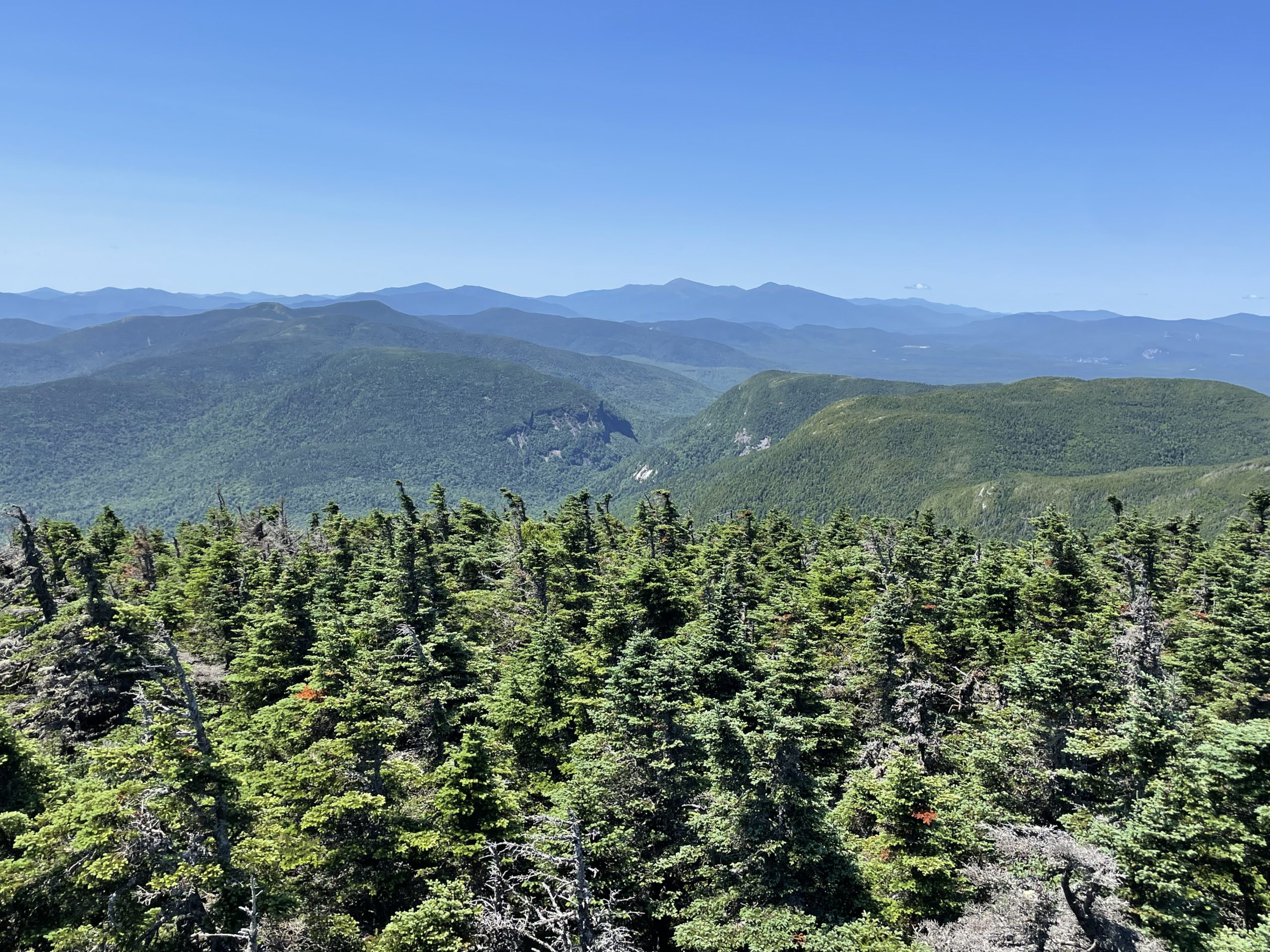 I started to really notice the warblers that day. I’ve watched birds for a few years, and every spring a whole parade of warblers comes through, leaving in a few weeks as quickly as they came. I noticed this on the trail too, starting in Virginia. First come the black-throated greens, buzzing rhythmically in the treetops; then the black-throated blues, with their lazier buzz in the underbrush. The city is a great spot to catch yellow-rumped warblers in April, but by May they’re all gone. In Shenandoah I caught a fleeting glimpse of a Magnolia warbler, and that was all. 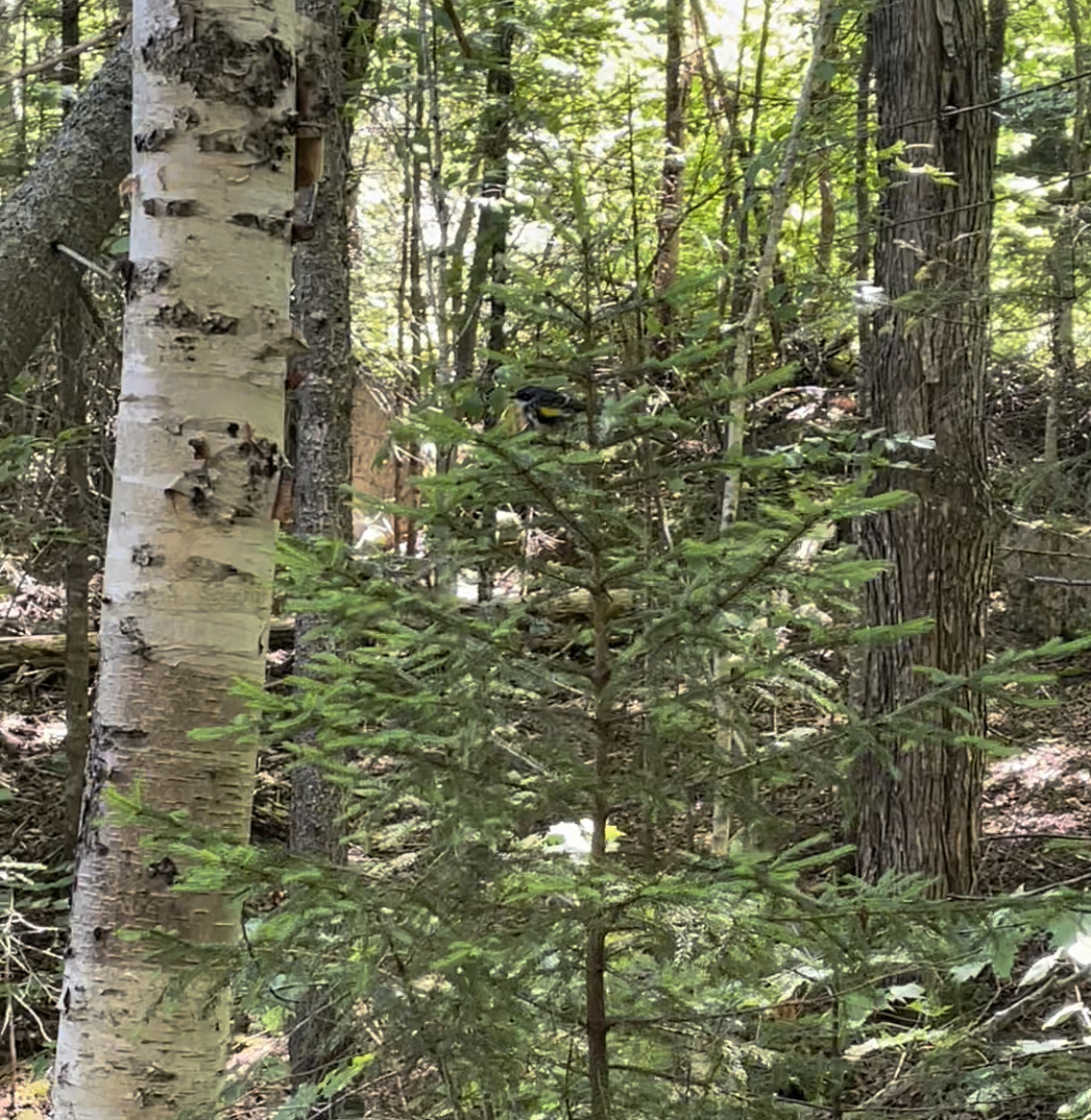 A yellow-rumped warbler minding its own business (near the top of the fir).

But here in the Maine woods they’re all living together, raising their fledglings in the deep forest. I’ve spotted all the species I mentioned above and more in the past few days, flitting about eating bugs and chirping protectively at their mottled young. I had some vague sense that they all headed to the ‘boreal forest’ to nest, but it never occurred to me that I was migrating with them to Maine! It feels as if I’ve stumbled into their secret home. 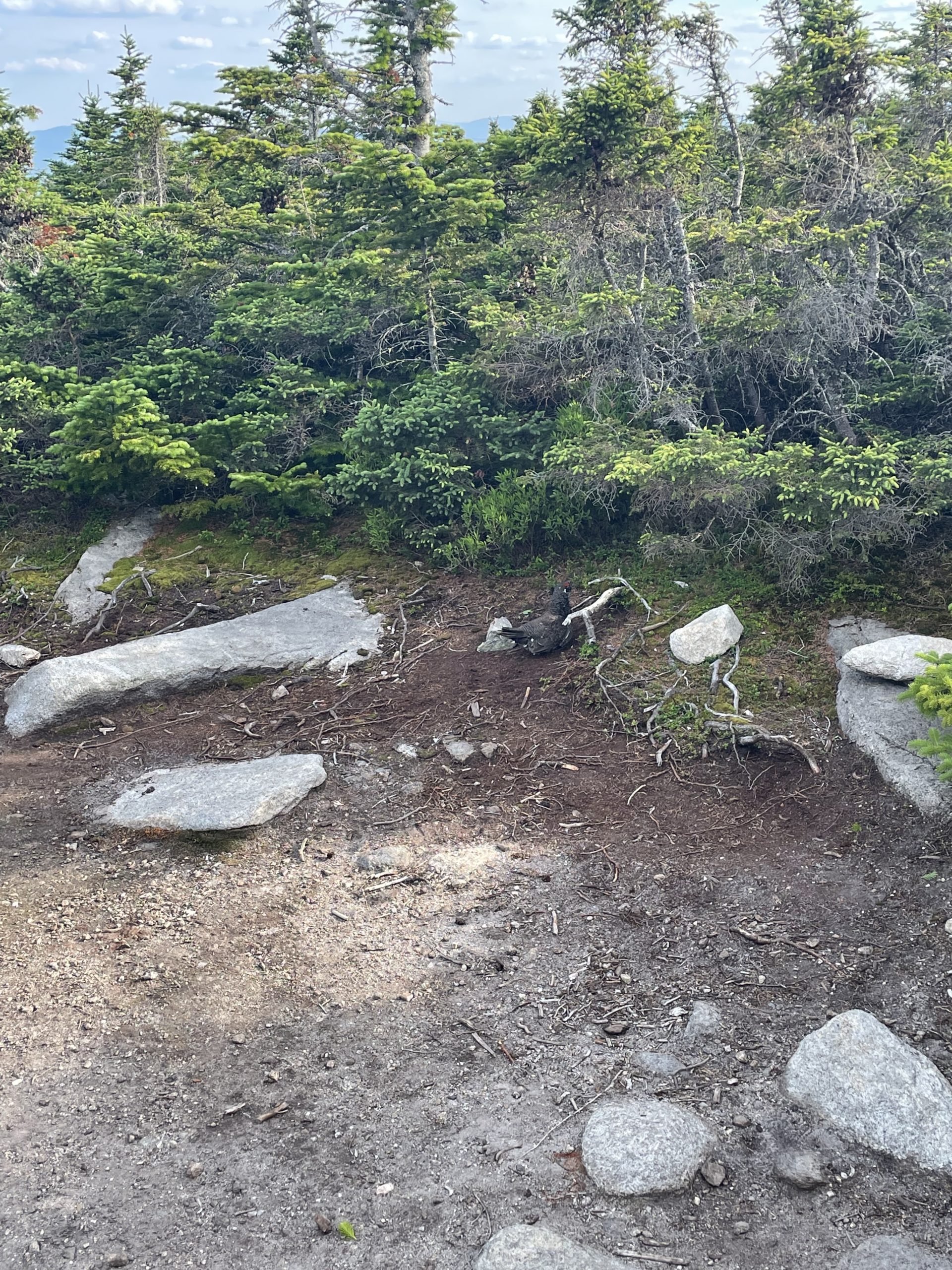 I’ve also seen some other birds, like this spruce grouse taking a dirt bath on Old Blue Mountain.

After Old Speck the trail drops into Grafton Notch, which marks the official end of the Mahoosuc Range. Some people go into town here, but I just sat on the curb and ate lunch watching road-trippers pass by. (“Look, honey, it’s the Appalachian Trail!”) The path was not much easier on the other side, but gradually, almost imperceptibly, it started to level out. Climbing Baldpate Mountain felt like scaling a giant stony onion; Surplus Mountain was more of a rock-strewn slope. Wyman Mountain, when I got there the next day, was almost a stroll. 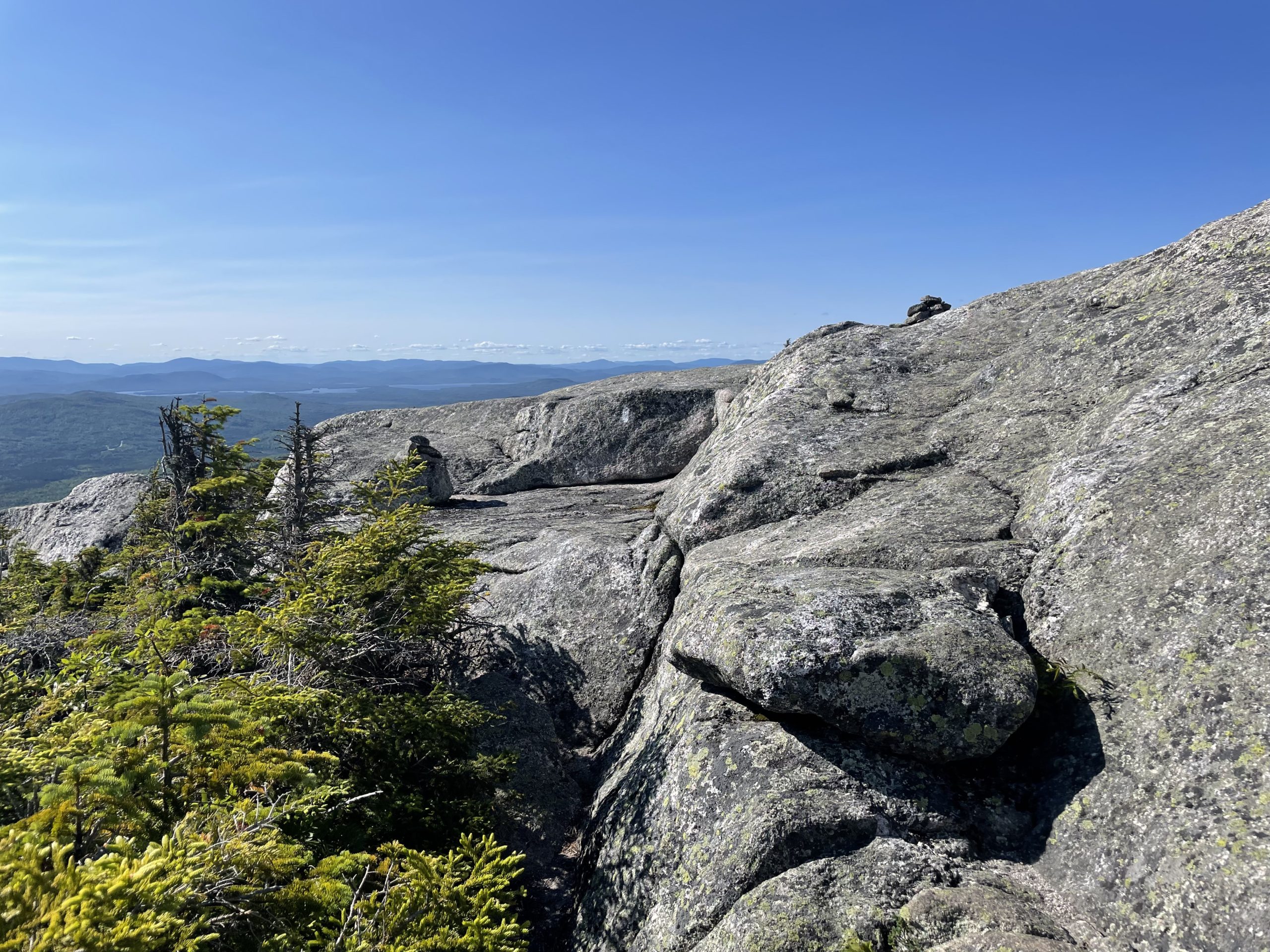 For the past two days, the trail has almost seemed pleasant. My body’s finally recovered from the Notch, and I can walk for hundreds of yards, sometimes for miles, without having to climb a single rock face. I’ve been creeping back up in mileage — 16, 17, now 18 miles a day. And the land has been crowded with more and more small lakes, which the Mainers insist on calling ‘ponds.’ One of them had a sandy shore with waves that felt like the beach. 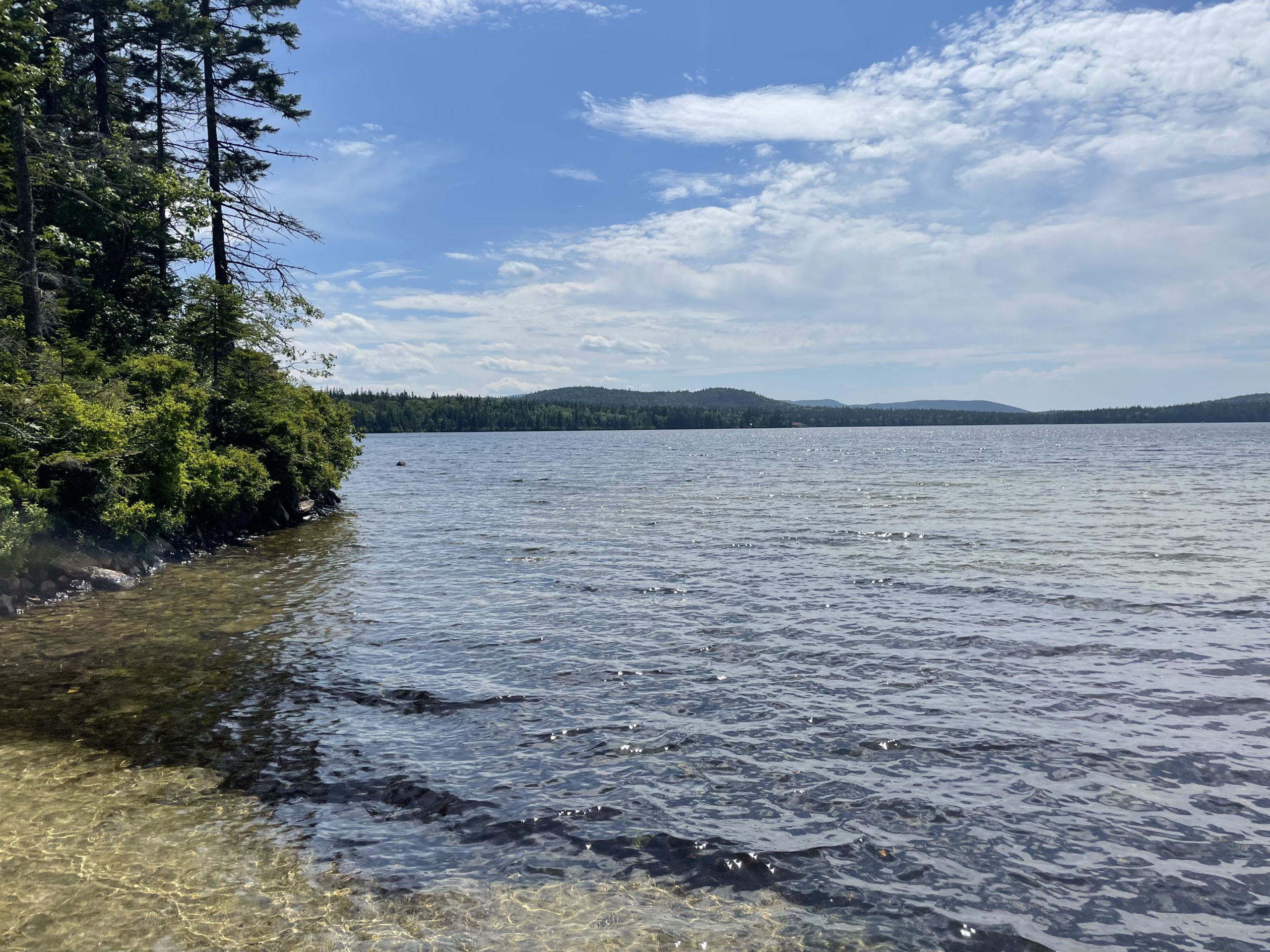 The beach at Long Pond.

But I know this trial of cliffs and stones isn’t over yet. The White Mountains/Blue Mountains ecoregion stretches all the way to the Bigelows fifty miles ahead. Saddleback and the Crockers lie just across the road. So in the meantime, I’m taking a break in Rangeley, thankful that I don’t need to rush.