I’m temporarily off trail. Huge emphasis on the temporarily part. Even so, I can’t believe that I’m typing those words. Not me. I’ve said it a thousand times in the past four months. I remember meeting Tigger, the owner of The Laughing Heart Hostel, way back in Hot Springs, mile 275, and another hiker saying, “I wonder if she looks at us all wondering which of us are going to be the 75-80% that don’t make it.” “Not me,” I thought. Every time I learn of a new person that’s gotten off trail I always think, “No way.” And if someone comes off for an injury I think, “That won’t be me.”

And then I got injured. I pulled my groin muscle in my right leg. I’m not even sure exactly when I did it. The doctor said that I likely had too much adrenaline going and that’s why I can’t pinpoint the exact moment of injury. For weeks I played it off like no big deal. “I just tweaked it,” and, “I’m fine,” and, “I’m only limping because the muscle is cold and stiff” were on constant repeat. I took four zeros at home in Connecticut and on the last day said, “Did you see me walk up the stairs? I did it completely normal!” as a sign of accomplishment.

I was determined to finish. In hindsight, maybe I should have given myself more time in Connecticut but it’s impossible to know. At the time I thought that if I waited longer I’d get back on trail and feel rushed and push too hard and re-aggravate my leg. I thought getting back on and going slow and doing low miles would work. And, truthfully, it did. For a little while.

When I talked to a doctor about it I was told that I was actually lucky. She was quick to correct me that I didn’t “tweak” it and that it was, in fact, a straight-up pulled muscle. She said that if I had pulled one of the surrounding muscles, the quad or the glute, I’d be done hiking for at least a month. As it was, she was shocked I was hiking through it (pulled muscles generally take four to six weeks to heal without hiking on it day after day) though admitted that it wasn’t impossible. She expressed concern for my other muscles because they would be working harder to compensate for the hurt muscle. She was dead on correct. Sure enough, as I hiked through Massachusetts and Vermont, the glute and quad muscles on the one side became sore frequently while hiking. Every time they did I took a break. I started doing miles in the teens when I had previously been averaging 25 a day. I started my days early, sometimes as early as 5:45, to give myself plenty of time with no pressure.

I did make mistakes. On days where my leg felt good sometimes I pushed miles that I probably shouldn’t have. Or I went at a faster pace because I was sick of hiking slow. In Vermont I got so frustrated with the mud that I got reckless just trying to push through it instead of exercising patience and taking my time and then would slip and aggravate things.

Then I hit the White Mountains. Some of the hardest hiking on the whole AT. It’s questionable to even call it hiking; a lot of times it seems a lot more like rock climbing. And it was impossible to avoid using all of the strength in all of my muscles to get me through. And it destroyed my already hurt muscle. I was sore after the first stretch to Franconia Notch. I was struggling, but determined, after the stretch between Franconia Notch and Crawford Notch. But the stretch between Crawford Notch and Pinkham Notch did me in. Other hikers were commenting on my noticeable limp. Strangers were asking me if I was OK both because of my limp and because my face was red and puffy from on and off crying. “Oh yeah, the heavy wind is just irritating my eyes,” I kept saying. 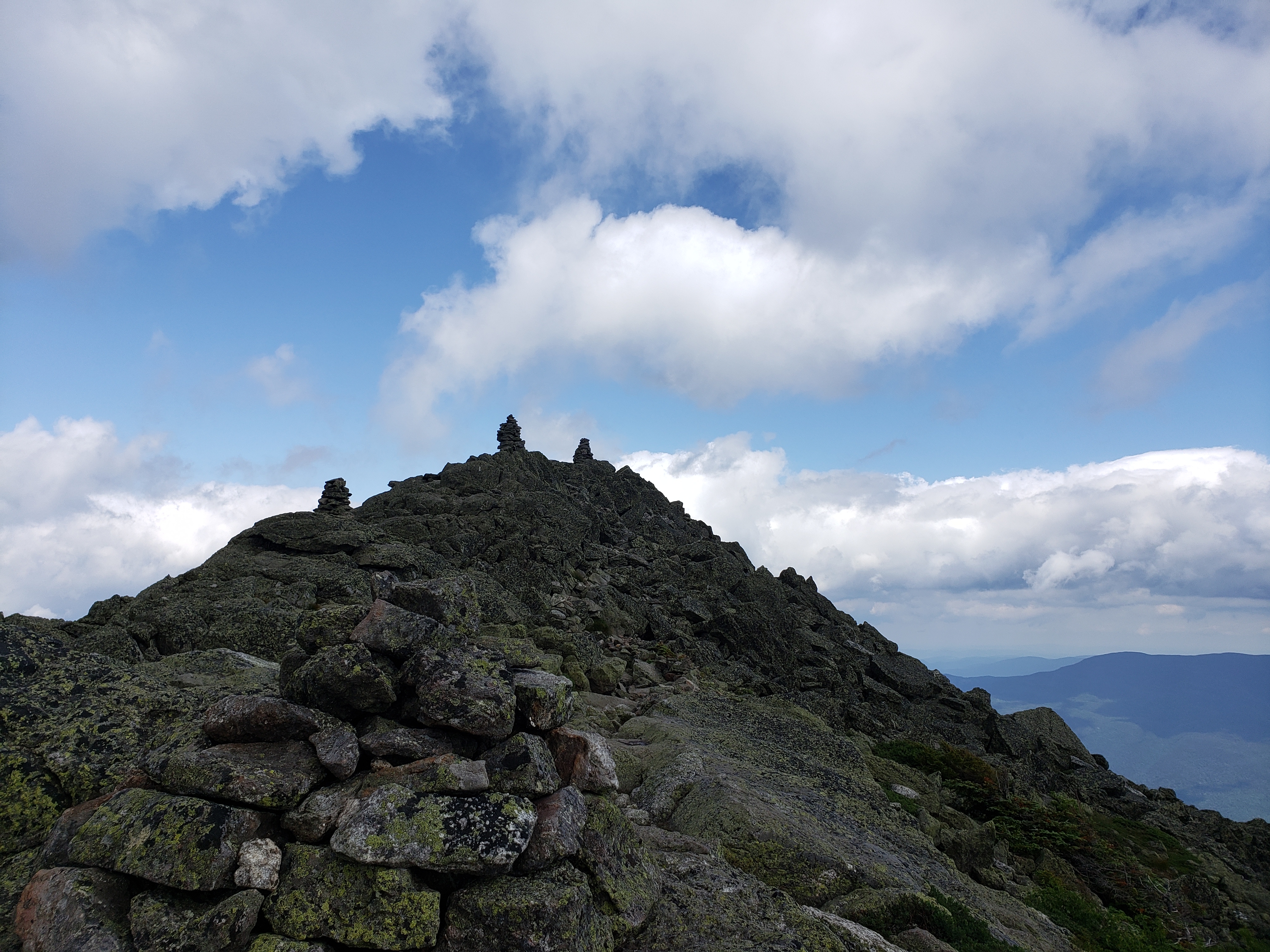 Going over Mount Madison I was passed by another hiker, Polly, and he yelled through the wind, “This is awesome!” and all I was thinking was, “This is horrible.” But he was right. The skies had cleared, it was beautiful, and it would normally have been a challenging, but fun, ascent and descent. And instead I was enjoying absolutely none of it, feeling completely miserable, as I tried to navigate another technical ascent and descent while using one leg as little as possible. An impossible task.

And then I fell. I’ve obviously fallen a lot on this hike. Every hiker has. There is no way to make it through without tripping, or slipping in mud, or whatever. Falls are inevitable. But this one was my worst by a long shot. It happened on the descent down Madison, which is very, very steep. And it only happened because of my bum leg. Constantly favoring it, and moving it as little as possible, I didn’t lift it up high enough over some rocks. That’s it. Stupid, right? But I didn’t trip. Instead, the foot of my bad leg got wedged between two rocks that I should have easily cleared. And it was good and stuck; I didn’t have a prayer of catching myself because my foot was not coming loose. So I fell straight forward, down an angle (because I was hiking downhill, when I landed my head was lower than my feet) with the full weight of my body and my pack sharply pulling against my trapped, bad leg. My muscle instantly spasmed. My trekking poles and some contents of my pack went flying and littered the trail. My kneecap smashed straight down onto a rock. My hands were shaking as I tried to right myself. I got up and retrieved my strewn belongings and every little movement, even just bending down to pick up my things, shot pain through my leg.

I had roughly 5.5 miles to get to Pinkham Notch. And they were dreadful. It took me nearly five hours, even though the technical part of the descent was over. I cried most of the way. Not from pain, but because I knew that I could no longer continue hiking. It was crushing. But it was time to face the music. Sheer willpower wasn’t going to get me through any longer. It was time to stop being stubborn and start being smart; my leg needs some rest and time to heal.

It was just after 8 p.m., and growing dark, by the time I got to the Pinkham Notch visitor center. I called my parents uncontrollably sobbing. “I can’t walk anymore.” I was picked up within the hour by an amazing friend my sister has had since high school, Mike, who was visiting his parents that live in the area. Their hospitality was beyond amazing. Mike instantly grabbed my pack off my back, dealt with my crying in the car (yup, still crying), then, at the house, I was hugged by everyone and told how amazing I was, fed, offered a shower and given a soft, warm bed to sleep in. I could go on and on about their kindness.

It took approximately a half an hour after making the original phone call to start brainstorming plans to get back on trail. I talked to my mom on the phone while waiting to be picked up discussing options. It’s still July and I only have 319.4 miles of the AT left. I have plenty of time to rest up and get back out there.

So, to be clear, this is just a time-out. Hopefully a short one. Though I wish it would be like Saved by the Bell. When Zack does a time-out everything freezes and when he times back in it’s as if nothing has changed. But things on the trail are not going to freeze while I’m gone. Time will have gone by. I’ll no longer be getting passed by Polly and Sheepdog and Co. 15,000 times a day. In fact, I might not be seeing anyone I know.

In the meantime I’m trying my best to stay preoccupied. I created a Bitmoji. Washed my car. Went to Walmart. Pretty exciting stuff.

I’m feeling positive, though. When I first got off trail it literally hurt my leg when I sneezed just from tensing up muscles. Getting in and out of the car I pathetically had to use my hands to help lift my leg in and out. Yeah. Really. Rolling over in bed? Also painful. Getting dressed? Ouch. I was taking stairs like a child, one at a time, getting both feet on the same stair before tackling the next one so I only actually had to step up with my left leg. My whole right leg was pained from my other muscles overcompensating and my lower right back hurt from moving rigidly, carrying my body (and my pack) in an unnatural gait. My dad says he can’t wait to see me not limping around. Same dad, same. But it’s only been two days and already there’s been huge improvement. I now walk less like a 90-year-old and more like a 70-year-old. I’ll be down to 30-year-old movement in no time.

And I am not deterred. Like I said, I have plenty of time left and my determination to finish has not wavered. And I’m so lucky to have such a great support system to help me figure things out. Cause it ain’t ova’ until it’s ova’. And it’s not over!