Tito’s Throne: Notes on the Mahoosuc Notch and Hiker Morale

This story begins down south along the Appalachian Trail somewhere in Virginia in the month of May. There I was enjoying my morning evacuation in a privy, muttering like a hermit to myself and the spiders, when I spotted a smiling cartoon face on the wall. I had been hiking north for three months and I was homesick, bug bitten and sore, but that goofy cartoon face smiled at me from its perch on a cartoon bowl mounted upon a caption: “King Tito’s Throne.” I laughed. I laughed every time I saw versions of “King Tito’s Throne” in privies for hundreds of miles. One version had King Tito hovering over a perfectly coiled turd. (Don’t act like you never made one if you’re a hiker!) Spring turned to summer and turds turned to moss and the trail turned to New England, and King Tito’s Throne faded from memory.

The dying days of summer found me in Maine. I spent the night at Full Goose Shelter. There was a group of south bounders (SOBOS) in the shelter, which was filled to capacity. Everyone there was wet and soggy. The weather on the trail had been awful in recent weeks– Hurricane Irene had struck that year, 2011. Despite funky feet and dog faces, it was a friendly and good spirited bunch in the shelter that night. The SOBOS had come through the Mahoosuc Notch and felt justifiably accomplished. After all, the Mahoosuc Notch is often called “the toughest mile on the trail,” for reasons I’ll explain later. I would have to traverse it north bound (NOBO) in the morning.

One of the SOBOS, a retired Lutheran priest, a woman nearly seventy years old, described her ordeal in the Notch as a “liminal experience.” She was scraped and bruised, but she had made it through. She spoke of the hike but also life and the spirit. That which is “liminal” has the quality of a boundary or a threshold. Birth is a liminal experience for both mother and child. Weddings are liminal experiences for couples. Graduations mark liminal pauses in our ongoing education. Thru hiking the Appalachian Trail offers its own liminal gates: Fontana Dam, Damascus, the Hudson, the Whites, etc. In Maine, for a NOBO, the hike is ending just as the trail traverses especially exciting terrain. A NOBO’s thoughts turn to what life after the trail will be like, when not obsessed with Katahdin and overwhelmed with the task remaining.

The Mahoosuc Notch was formed where two mountains came together at an especially acute angle. This narrow meeting place does not have a footpath as “the notch” (the place where the mountains meet) is filled with erratic boulders. For one mile, the trail is a confidence course requiring the hiker to climb over or crawl under these boulders. A cold gurgling creek runs invisibly beneath the hiker and layers of scattered boulders. There is ice down in crevices in Mahoosuc Notch twelve months a year. A hiker must pick through this maze, following the white blazes. Sometimes the blazes seem impossible to follow, especially for the corpulent, or like myself, the not especially nimble. Hikers have been known to slip and fall, many of these falls have resulted in catastrophic injuries. It is also quite difficult to extract a body from Mahoosuc Notch. So, in my NOBO experience, the Mahoosuc Notch is like the true gateway into Maine. Traversing it is a liminal experience. 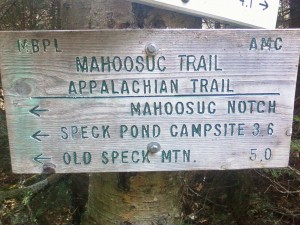 I entered Mahoosuc Notch alone. I had aggressively hiked ahead of friends for days trying to make Katahdin in good time. I was lonely and sore. I had come too far to quit but I missed my wife back home and so I was a depression case in boots. The skies rumbled with indecisive thunder. I climbed and I crawled. Some of the boulders were slippery. In several places I had to take off my pack and cram it through a squeeze hole. My poor pack took more of a beating that day than any other day on the trail. The Notch had hot, humid spots higher up, and once I got sweaty, I found myself getting chills from low spots with a winter breeze blowing up from the invisible stream beneath. People with rock climbing experience love the Notch and monkey their way through it with a smile on their face. I am not one of those people. That mile took me almost three hours.

At one point I had to drop from one boulder onto a lower boulder. (Following the blazes still…) I dropped down hard with an awkward landing and scraped my hand. It bled. I noticed both my knees and one of my shins was bleeding. They were just scrapes, but my legs were dirty and sweaty and bloody. I noticed then that the rock had blood all over it– from other hikers! I looked around and all I saw was boulders, and beyond, trees rising up all around and I felt claustrophobic and anxious. I started to freak out a little, which happens, but the Notch is a spot where you want to keep your head. I sat on that bloody boulder, drank some water and ate a granola bar and tried to get my morale going again. 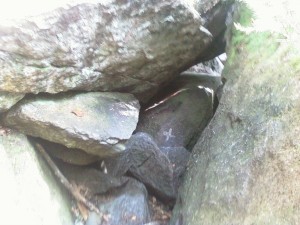 Just then I heard voices coming up from behind. Soon they appeared: two twenty something guys hopping and skipping from boulder to boulder, neither alarmed by the obstacles nor slowed by them. When they reached me, I think they could tell I was having a bad day. They stopped and spoke to me on the bloody boulder.

“I’m Triton. I left from Amicalola on February 19th.”

I shook the vandal’s hand, remembering those spring mornings taking a crap and laughing at those goofy cartoons hundreds of miles and months before. I felt as if I had met a celebrity. Tito and his buddy scrambled on and faded into the wilderness. I completed the Notch in snail’s time, but with no broken bones or equipment.

Upon exiting the Mahoosuc notch, I soon began my ascent of Mahoosuc Arm, which is no wimp of a mountain. A third of the way up the skies darkened and torrential rain began to fall. Lightning lit up the sky followed by thunder that rattled my rib cage. Soon the stone steps of the trail were a waterfall. I was soaked. And demoralized. At some point, as emotionally exhausted as I was physically exhausted, I sat in the rain on a step halfway up the mountain and blubbered by myself in the rain. I cursed the rain and the lightning and the thunder and the damned Mahoosuc Notch and the dozen dirt smeared scrapes that bled on my shins and knees; hands and elbows. “Fuck this trail!” I yelled to the woods. I was all alone. I put on my rain jacket, and in the relative dryness of its hood, I speed dialed my wife because I was high enough on the mountain to get a signal.

My wife answered and listened to all of my self pitying bullshit, as she had several times on my hike. We exchanged are you alrights and I love yous, and once we hung up the mad rain had slowed to a sane drizzle and I still had the rest of the mountain to climb. I did so. I arrived at Speck Pond shelter exhausted after a low mile day. I happily paid the site fee and skinny dipped in Maine’s highest body of water. I put ointment on my wounds, ate a hiker’s supper and got horizontal. I wouldn’t be home for another month, after I climbed Katahdin.

A hiker is never the same after the Appalachian Trail. Many hikers talk about appreciating simple things, like the refrigerator or the luxury of a clean toilet. I appreciate those luxuries, and as to the latter, there are many mornings today when I smile in contemplation of Tito’s Throne. 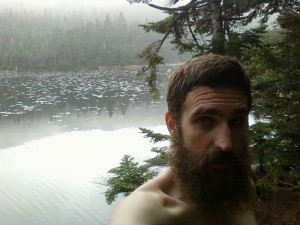 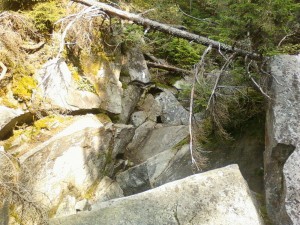 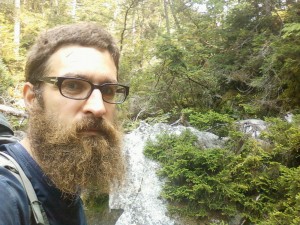