About a mile or two from Neel Gap, we ran into Forrest.

Hippie prince of the Southern Appalachians 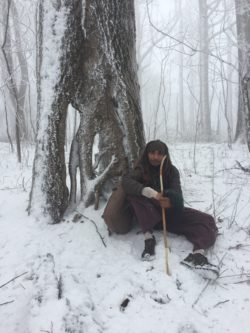 Forrest first came into our lives the night we camped at Lance Creek. We were sitting halfway in the tent cooking dinner when a tall, slender young man came striding towards us from the trail. He wore striped harem pants, a tunic, trail runners, dreadlocks, and a scarf around his head that resembled a crown. He had a smile that ranged from serene to ray of sunshine to Cheshire Cat, but was constant in the sense that it never left his face for a second. He told us that a friend of his had picked him up at Woody Gap and that he was able to go into town to buy hand warmers. He kindly bestowed some upon us and chatted with us for a few minutes. He responded to questions like “how old are you?” with answers like “my body is 23.” He invited us to come by later and check out his tent.

That evening as we hung our bear bags, we found ourselves drawn by the sound of dreamy music and the soft glow of green fairy lights to a spacious tarp tent. Forrest greeted us and told us we were just in time for some peppermint tea. He sat in the center of the room on a large tapestry and strummed his acoustic guitar, which was plugged into a small amp with a melotone setting that created a trippy sort of echo effect and drew out each individual vibration so that it sounded like an entire band was playing. We spent about an hour listening as Forrest improvised lyrics and melodies and imparted his wisdom about trail life. He told us he had first hiked the AT about four years ago and that he had been returning ever since- once for a thru hike and the rest to walk large sections till he was called away by some other adventure. He told us about his mentor, a trail veteran and Deadhead named B Man, who had taken him under his wing his first year and shown him how to really live in the woods.  He said that the name of the game was to listen to your body and to embrace the mantra “hike your own hike.” He reminded us that there are no real obligations on the trail, and so your enjoyment depends entirely upon the choices you make for yourself.

We hiked a ways with him the next day and waved goodbye to him at Neel Gap when we drove away with Janine. Something told us we would see him again.

It came as no surprise, then, when we saw him leaned up against a tree dispensing Jolly Ranchers to passersby that very next day. When he saw us he cried out “sistahs!” and gave us each a hug. Then he asked us our plans for the night. We told him we expected to sleep at the Whitley Gap shelter. He told us he had an alternative; he was going to spend the night with some friends where the was food and wine and beer and music and warm places to sleep. We were welcome to join. We told him thank you, but we had just slept in a warm bed the night before and it was time for us to get back to the woods.

“Listen,” he said with a laugh, “it’s a long way to Maine. You have plenty of time to rough it.”

This struck us both as an excellent point. Then he added:

“Besides, the coldest night I ever spent on the trail was at Whitley Gap.”

We were sold. We took his number and agreed to meet him in a few hours at Hogpen Gap.

The remaining five miles of our trek that day consisted of several small but steep hills. The frigid air, however, made us grateful for the workout. When we got to Hogpen Gap I texted Forrest and he told me he and his friend would be there in a half hour. So we took out Chelsea’s Bluetooth speaker and turned on some music and started cleaning up litter around the parking lot. When we had the place looking spotless, we put on the Saturday Night Fever soundtrack and danced like maniacs. At least one car thought we were trying to hitch a ride and pulled over, not realizing we were simply doing our best to keep from freezing. Still, it was a ton of fun. At one point I looked over at Chelsea and thought it would be impossible to have more fun with anyone else.

Finally, a silver car pulled into the parking area. Forrest waved to us from the backseat. Behind the wheel sat Boodan, a laid back, amiable class of ’89 thru hiker and longtime trail angel. Riding shotgun was a current thru hiker named Stay Put, who had wound up in the car when Boodan and Forrest had seen him walking on the road and he had asked them how far it was to walk into town. They had told him “too far” and advised that he hop in with them. We drove once again through the beautiful North Georgia countryside.

After about thirty minutes we pulled up to a beautiful house nestled deep in the hills where Boodan lived with his wife and thru hiking companion, Kim, and their son, Somerset. For the next three days, we enjoyed the incredible generosity and hospitality of these decades-long trail angels. Over and over, Chelsea and I would offer to chip in money or do chores around the house and were politely told to relax and enjoy ourselves. Eventually they allowed us to make quiche as a token of our appreciation, but prior to that we were only reminded of one simple rule: you are not allowed to take anything from a thru hiker.

On our second day, Forrest invited us to slack pack the twelve miles between Hogpen and Unicoi Gap. It was a very cold, windy, snowy day and this stretch of trail offered few bailout points, so we still brought a fair amount of our gear, but without tents and sleeping bags in our packs we felt weightless. We flew up and down the ridges behind Forrest. Along the way he would point out plants to us like the mountain laurels and rhododendrons. Occasionally he would break out into songs like “My Girl” and “Ain’t No Sunshine” and Chels and I would join in. When we reached the Blue Mountain shelter, we encountered a group of hikers who had hunkered down early in the afternoon and prepared for the cold night ahead by packing like sardines into the shelter and huddling around a campfire. One guy had his foot up on the rocks so close to the flames that it began to melt the rubber on his boots. He was so cold that he didn’t even care. We realized just how lucky we were to have a warm house to go back to and stood back from the fire feeling too guilty to steal any heat from these poor souls. After a few minutes we hurried off to meet Boodan, who we found waiting down below in the parking lot with Starbucks coffee and Zebra Cakes. It was so thoughtful we were nearly moved to tears.

The following day we took our first zero, as temperatures down low were in the 20s and Kim and Boodan were expecting a bunch of old friends to arrive from out of town for the big St. Patrick’s day party they were throwing on Friday. We got to meet B Man and his wife, Jo Cool, and their son, Blue. We met Geek, who was legendary for thru hiking with Boodan and Kim in 1989 with a cat named Ziggy in his backpack the whole way. We talked and laughed and ate and drank all day.

The call of the wild

We were graciously invited to stay until Friday for the party, and Boodan even offered to slack pack us again so that we could get in some extra trail miles. It seemed like an offer we couldn’t refuse, and yet the weather had taken a turn for the better, and we were beginning to feel ourselves pulled Northwards. Amazing as it had been to have a safe warm place to stay during those extremely cold nights, we had come to the trail to eschew the comforts of civilization; to test ourselves by seeing how much discomfort we could handle. We knew the time had come to say goodbye.

That night we retired to the basement early and went outside with Forrest. He showed us a blanket that he said was given to him a few years back on the trail by a woman named Truly. He told us that ever since that night, he has wrapped his loved ones in that blanket. He wrapped it around us and we stood there huddled together gazing up at the stars. Then Chelsea asked if she could put on the song “Tub Thumping” by Chumba Wumba, and we threw the blanket off and danced all over the lawn, cracking ourselves up the whole time.

I guess at some point in the evening Forrest asked me what my favorite drink to make as a bartender was, and I told him it was a ruby red cosmo, because the next day as we said goodbye he gave me my trail name: Ruby Cosmo.

Thursday morning we took our last hot showers and partook of the hearty breakfast that Kim had prepared for everyone in the now very full house to enjoy. We gave her a big hug and thanked her an insufficient million times for all the incredible generosity and kindness. Then we set off with Boodan and Geek for Unicoi Gap. We gave Boodan a big hug and thanked him an inadequate million times too, promised to send a picture from Katahdin, and then set off into the woods, bound for the shelter at the top of Tray Mountain. 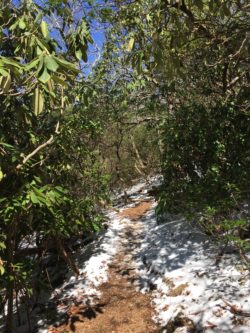