The Unexpected Beauty of the Appalachian Trail

It has again been far too long since I wrote a blog update. To bring anyone who’s wondering up to speed, I have now completed the trail! I summited Katahdin on September 17 and am now back at home in England. I don’t know if I can put into words how incredible the past six months have been but I’m going to try! This post is one that I’d been writing throughout the second half of the trail but never got around to posting. After this I’m going write a post or two detailing the latter parts of the trail and my overall thoughts and feelings regarding my thru-hike. 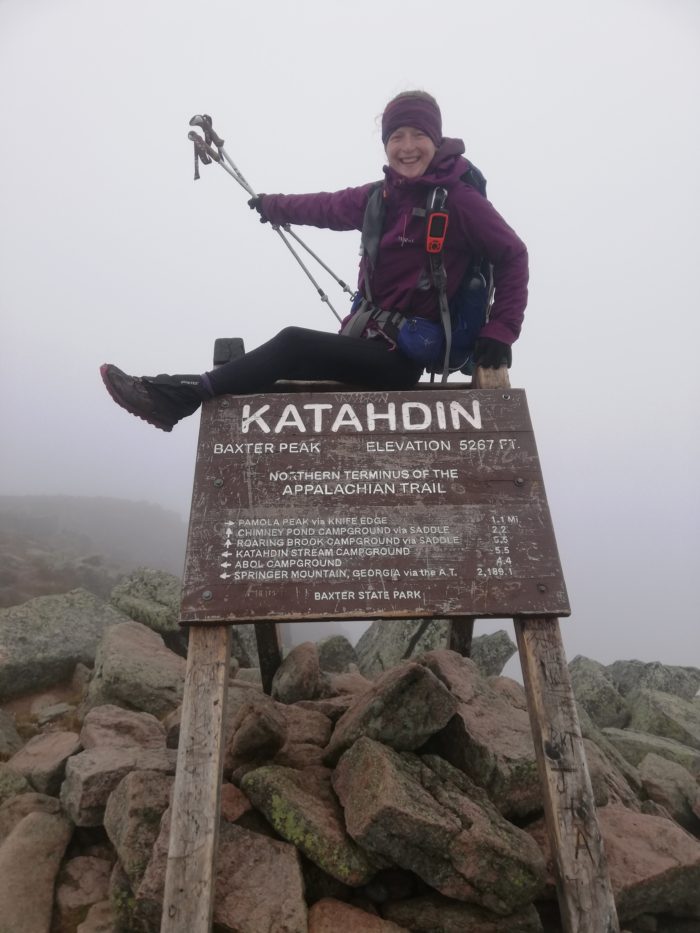 For this post I’m going to focus on the small, beautiful things about the trail that took me by surprise.

For me, fireflies were one of the best surprises of the trail. As far as I’m aware we don’t have them at home but it may just be that I’ve just never been in the right place at the right time to see them. Before this trip if you were to mention fireflies to me my mind would have gone straight to the song by Owl City. Now, my mind is filled with images of tiny pinpricks of light illuminating the night. As with any really cool phenomena it’s impossible to take a photo of this beautiful sight. At first there would just be one or two. By mid-June there were hundreds. As the sun began to set you’d start to see little flashes of light around the undergrowth. My most memorable firefly experience was actually not on trail but while staying with a friend of Slouch’s in Pennsylvania. We were driving through the countryside at night and I was blown away by the sight of the fields on either side of us. Thousands of fireflies must have been flying around these fields, each of them giving of an intermittent glow. It looked as if hundreds of arcs of light were being lit up in turn. I was blown away by the beauty of fireflies and by the fact that they seem to be such a commonplace thing in this area and not just something rare you might see on trail if you’re lucky. I was sad when the weather started to change and firefly season ended. I would urge anyone who’s never seen them to take a drive through Pennsylvania on an early-summer evening.

Before starting the trail I remember reading in my AWOL guide that there’s a type of rock called mica that is shiny and is very common in North Carolina. I made a mental note to look out for it. I’d seen shiny rocks before and was expecting to see maybe the odd rock or two with a bit of a glittery tint. The reality was quite different. The whole way through Georgia and North Carolina there were patches of the trail with so much mica that the soil itself seemed to be sprinkled with glitter. It looked as though someone had walked along in front of me with a salt shaker full of glitter strapped to the bottom of their pack! And it was of course noticeable in the rocks themselves, with large silver patches glistening in the sun. As we moved farther north the mica content lessened and I forgot that it’d ever been there. Then we got to New England. There was so much mica in New Hampshire that there were literal flakes of shiny silver material lying all over the trail. The soil was shiny again and I was reminded of how fascinated I’d been by this at the beginning of the trail. Like with the fireflies, it’s hard to photograph. I’ve tried several times to take pictures of the “glittery soil” but end up with just a photo of  muddy path. 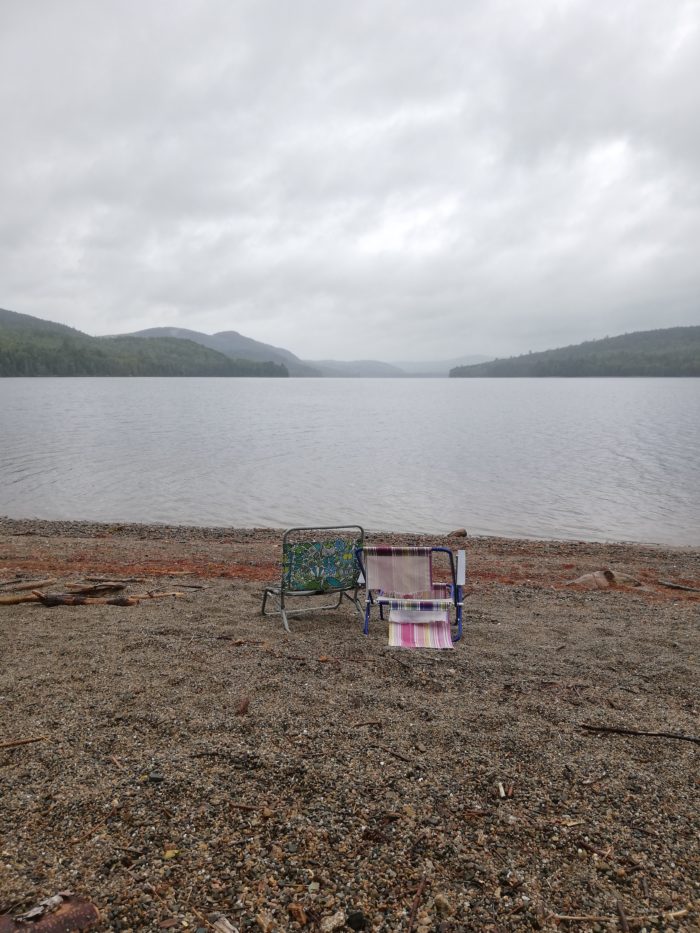 Abandoned deck chairs by a misty lake in Maine.

There’s always something beautiful about water. For the whole trail there’s been lots of pretty waterfalls and streams. As we’ve gotten farther north there have  been more and more lakes. Having reached Maine, especially in the 100-Mile Wilderness, there are several lakes every day. There’s something unique about these lakes that I haven’t seen anywhere else. The pine trees stretch right down to the shoreline, with small rocky outcrops being the only way to see across the lake. They have a unique stillness and make you feel as if you’re the only person for miles around. One of my favorite nights on the trail was when we camped at the Antlers Campsite, right on the edge of a lake. The sky was clear so the full moon was perfectly visible. The moon and its reflection were glowing so brightly that I thought it was a fire when I first caught sight of it through the trees. 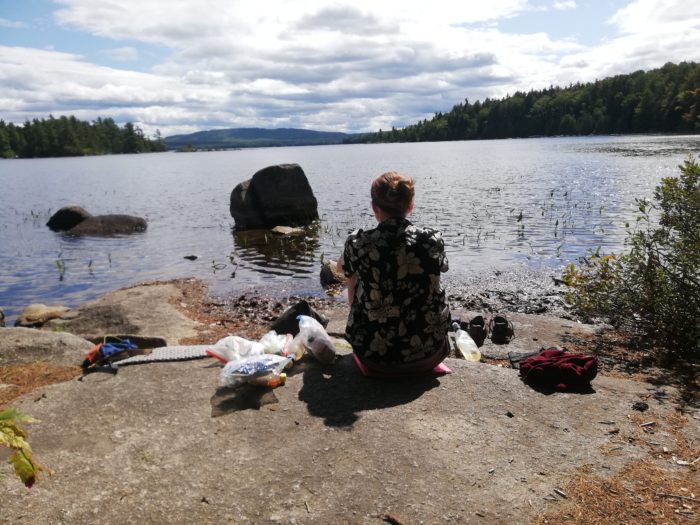 Eating lunch by a lake in the 100-Mile Wilderness.

Before the trail the only animals I thought about were bears and the infamous mice that inhabit the shelters. Although at first I’d have said I’d be happy to never see a bear, I was glad to see four throughout the trail. All of them were pretty small and thankfully I never saw their mothers! I never saw any mice in the shelters. I saw a few nearby and one night a particularly brave one stole a tissue from near my head, but other than that I was blissfully ignorant of their presence. The wildlife that really caught my eye was the things that I hadn’t been expecting. The most frequent large animal that I saw were deer, often seeing several a day in Virginia. Outside of that most of the creatures that I crossed paths with were tiny! My favorite were the bright-orange salamanders that would litter the trail, especially after it had rained. Then there were the frogs, ranging in size from fully grown toad-like things to the tiny little things the size of a fingernail! And every size shape, color and degree of fluffiness of caterpillar! The last animals that I must mention are the squirrels and chipmunks, which I group together because they behaved in very similar ways. Almost every time I heard a rustling sound near the trail I would look around to see a little furry creature scampering around in the trees. 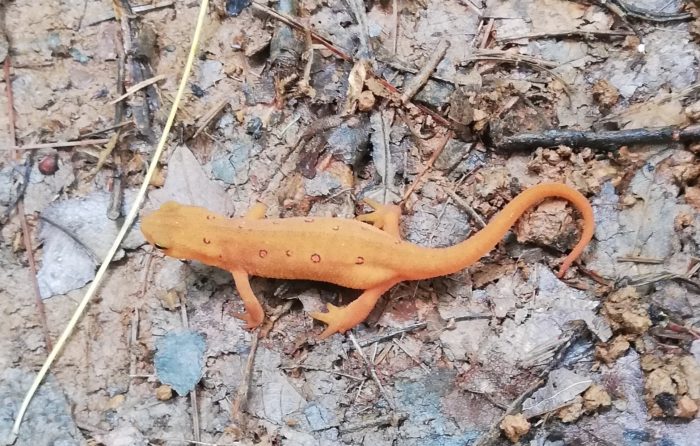 There were countless other beautiful things about the trail but hopefully this was enough to convince you that it was a truly beautiful place!