This blog post started as an update from 800 miles in. Somehow I’m now at over 1,300 miles and am still struggling to finish it. With longer-mileage days comes less time sitting around in camp and therefore less time to sit down and write. I’m taking this as a positive as it means I’m making the most of the experience and not sitting around bored. There are many things I want to write about so I’m splitting it into two posts. This time I wanted to talk about some of the practical/logistical things of the trail and next time I’m going to ramble on about the trail itself, the wildlife, and my favorite places.

I put a lot of time into researching my gear but was still worried that it wouldn’t hold up. So far I’ve been really happy with all my choices. I haven’t had to change out any of my gear items other than when things have worn out. I’m on my third pair of shoes and have had to replace both my pairs of Injinji socks. I’m even starting to wear holes in my Darn Tough socks, which, as the name suggests, are known for being darn tough! 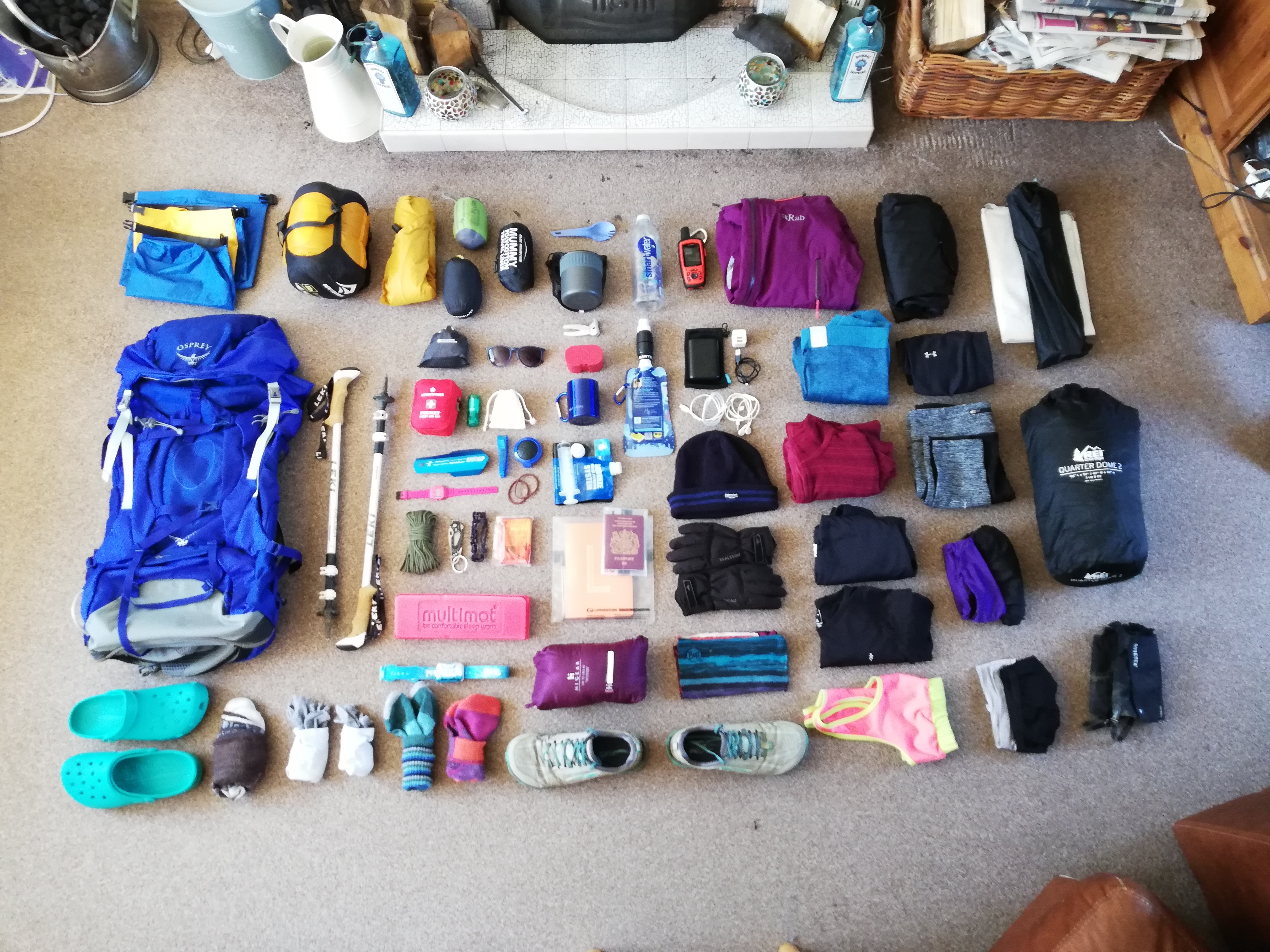 My gear before starting the trail. None of it is this clean now.

The only additions I’ve made to my gear is a Kula Cloth, a fancy kind of pee rag with antimicrobial properties. The only things I’ve got rid of are some of my winter clothing.

My overall pack weight is still on the heavier side, probably sitting somewhere between 35 and 40 pounds. Occasionally this will bother me and on days when I’ve got four or five days worth of food in my pack I can feel the weight with every step. But most days it just feels normal. At this stage I’m well aware of the few things I could get rid of (some clothes) or what I could replace to make my pack lighter (tent) but the cost/inconvenience of doing this for me isn’t worth the couple of pounds pack weight difference. I’ve made it this far, after all!

To be honest, the biggest gear issue I’ve had is with my phone. I’m on my second phone, third pair of headphones, and have just smashed the glass in my phone case. Electronics are just not built to live outside!

Although I started this trip alone, the only time that I’ve really been a solo hiker was doing the Approach Trail. From the first night at Springer Mountain Shelter there was a group of us that had all planned to do the same mileages for the first week. We therefore stuck as a group for the beginning of the trip and the group grew in size throughout the first week. This group stuck together until Fontana Dam, when we unintentionally separated as different people had to stop at different places. The way things worked out left me with just one member of my original tramily, Green Slouch. 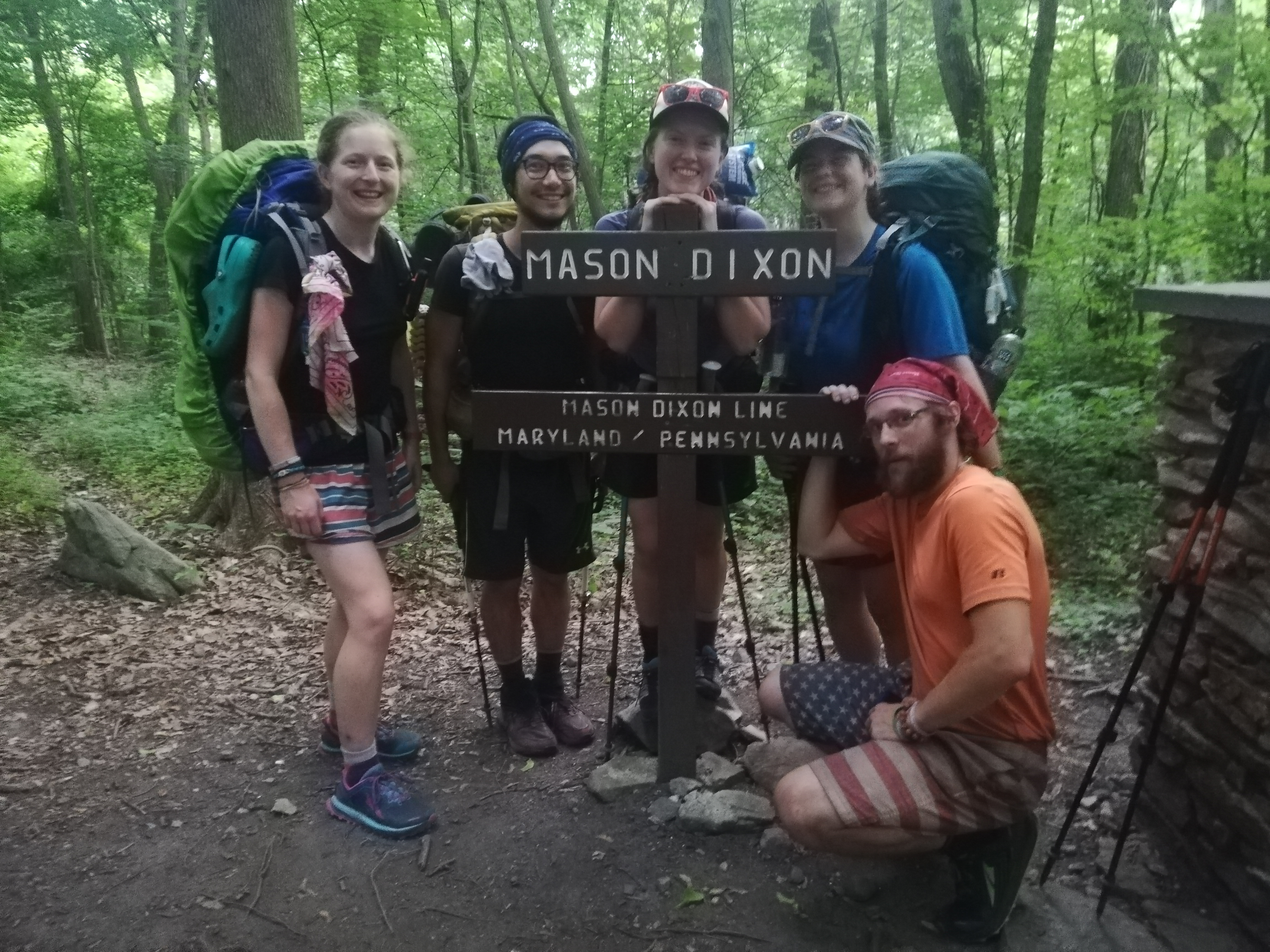 From left to right: me, KrazyGlue, Passport, Patches, and Green Slouch.

I was apprehensive to head into the Smokies without a large group of familiar faces but as always it turned out to be fine and we met loads of great new people. We stayed as a pair for quite a while, which was nice, but I definitely was ready to get to know some new people after a few weeks! We didn’t form a new group until after Erwin, TN. We had been hiking around a group of three for a week or so and gradually got to know them and and naturally started traveling as a group of five. These new faces were Patches, KrazyGlue, and Passport. We hiked solidly as a five for about 500 miles, until we reached Shenandoah National Park. The day before entering the park I became ill and had to zero for two days. Slouch hung back with me but the other three kept moving. It took us about two weeks to all be reunited and since then we’ve only all been in the same place a handful of times. We’re still loosely traveling as a group but a difference in hiking speeds and personal goals means we’re not all ending up in the same place every night. I personally have a strict deadline to finish the hike by mid-September due to my visa. This means I’m trying to maintain a constant, steady pace rather than taking impromptu zeros and neros and then pushing big miles to make up for it and risk injuring myself. Understandably, my friends have more freedom than this so are able to be more flexible. At the moment Slouch and I are sticking together but we still tend to see the other three most days.

I’ve found the tramily/social aspect of the trail to be the most mentally challenging part. Most other things on trail I’ve learnt to have a pretty lassez-faire attitude to. Questions such as, “What if it rains tomorrow?” and “What if the hill is big and steep?” don’t really bother me as there’s not really much I can do about them. So far I’ve never found a hill I couldn’t climb.

But the logistics of sticking with a group of people who may or may not want to do the same mileages as you can be tough. Everyone has their good days and bad days, their days when they can push lots of miles, and their days when every step is a struggle. The hard part is balancing what your body wants you to do with what your friends’ bodies want them to do. Even when traveling just as a pair it can be difficult for me and Slouch to find a plan that we’re both happy with. 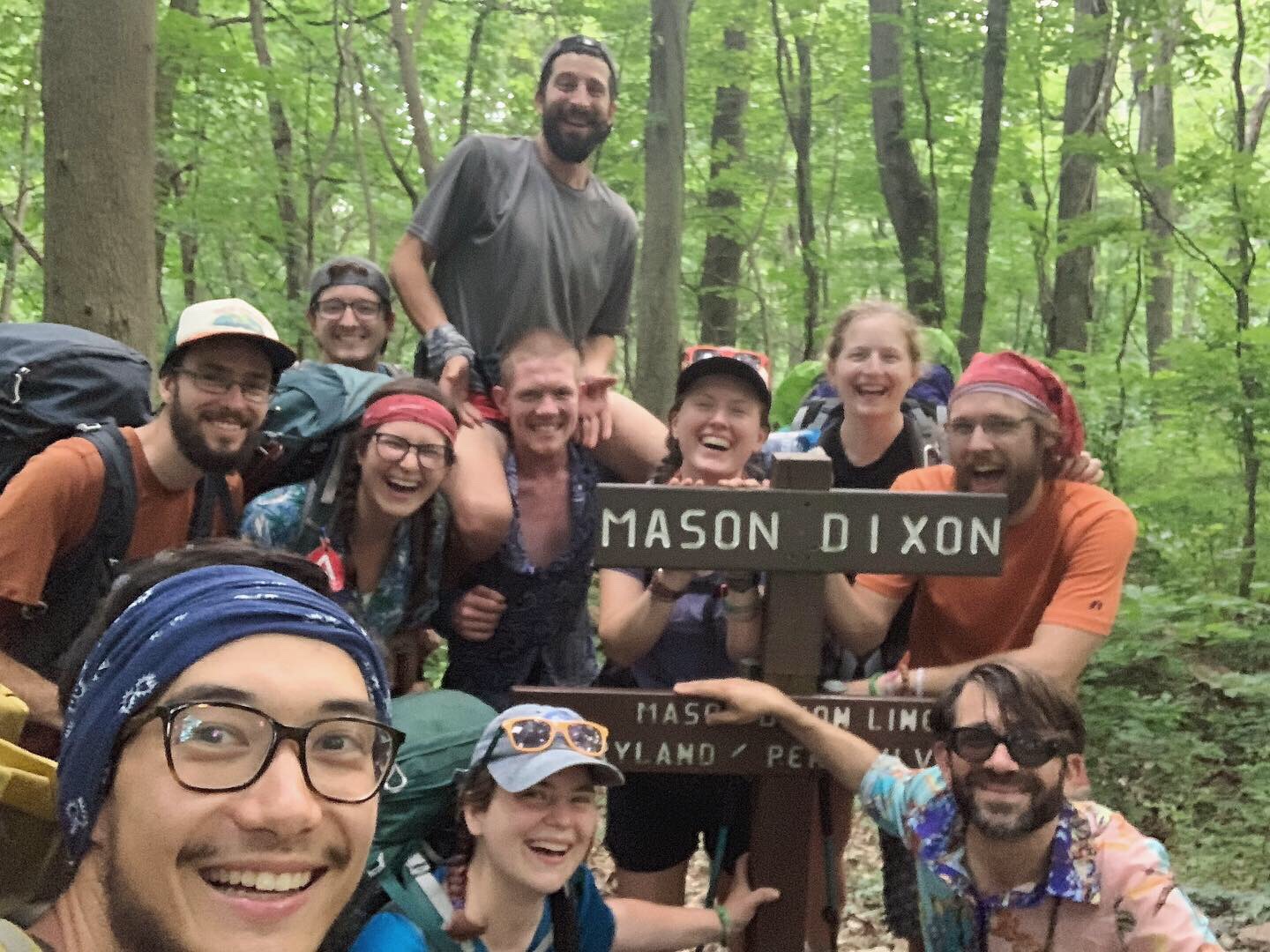 I must also say that although my tramily are my closest friends on trail there are also many many other people whose company I enjoy. There are a few other groups who are considered extended tramily, who we bump into every once in a while and get along with just as well as before. The trail is full of wonderful people and I know I could hike alone and arrive at a shelter full of friendly faces. On the other hand, having a tramily of people who know you well is very comforting; they can make your good days even better and be a shoulder to cry on when things get tough.

I was aware of the concept before starting the trail but had never really given much thought as to whether I’d give it a go or be a “purist” and carry my pack along every mile of the trail.

Slackpacking is when someone with a car transports your pack for you and all you carry is enough water and food for that day. The feeling of bouncing along the trail without 30+ pounds on my back is wonderful.

Often people will do this in order to do a bigger-mileage day without the weight of their pack. I’ve found that I actually prefer to do it with a shorter day. My reasoning is that I like to use slackpacking as a way of giving my body a bit of a break, which isn’t possible on a long day. Hiking 20 miles is still hiking 20 miles whether you’re carrying a pack or not. You’re still going to feel pretty tired at the end of the day. If, however, you do a day that’s shorter than usual, you’re not only carrying less weight but also walking for a shorter period of time. This means you may actually give some of your muscles a bit of a rest while still getting a few miles in. For example, one weekend my tramily was fortunate to be hosted by a friend of Slouch’s. We did two days of slackpacking, each of about 12 miles. We were able to have a lie-in, start hiking later than usual, take the walk pretty gently, and still be done with plenty of time to socialize with our hosts without feeling completely exhausted. I’ve found that I prefer to do days like this rather than taking full zero days as I find the lack of progress frustrating. 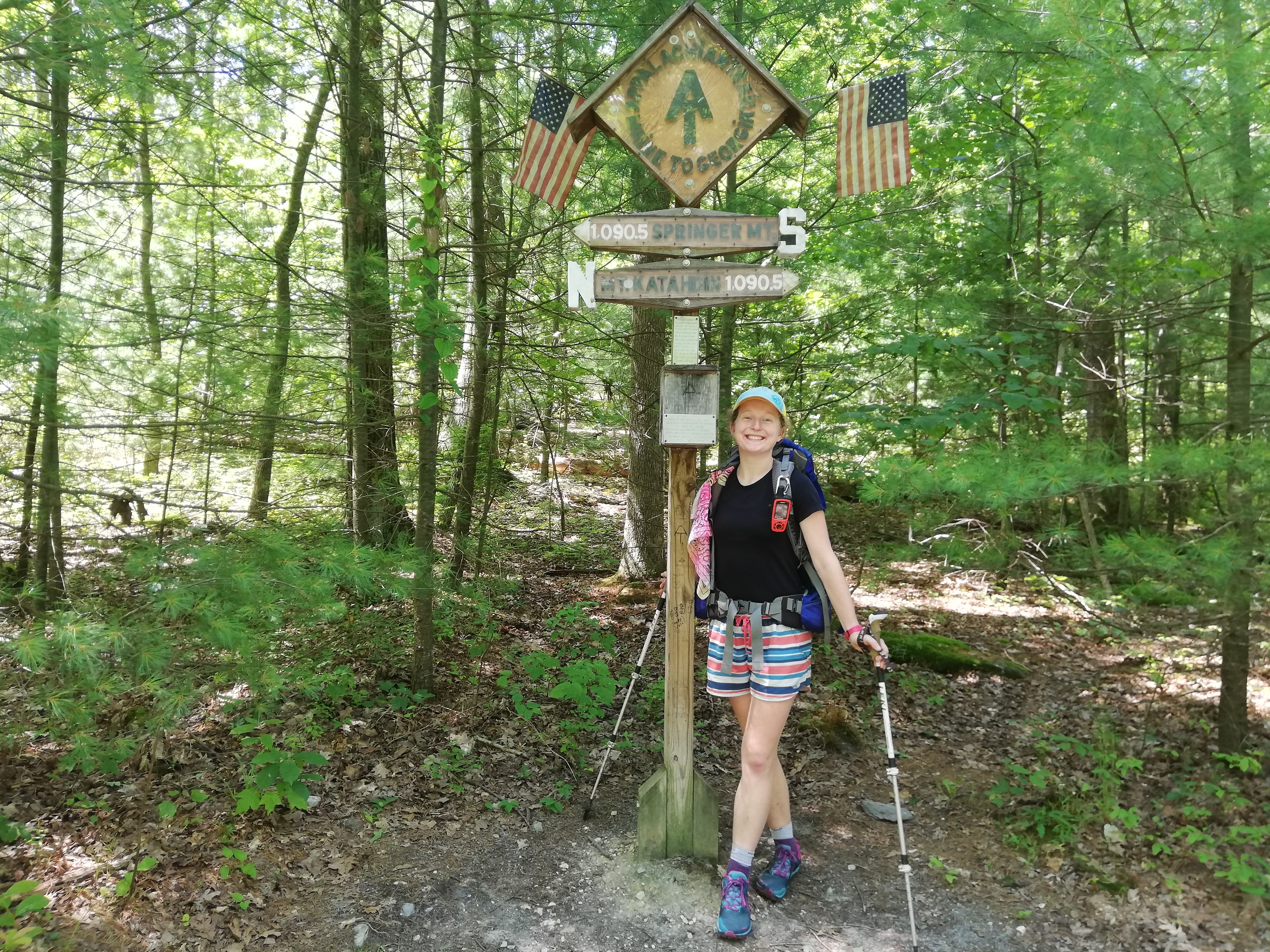 Slackpacking and passing the halfway point made a very happy Hermione.

That’s the end of my update for now. Hopefully it won’t be as long before my next one!

Also, just to let everyone know, Virginia is not flat.