The Ups and Downs of Vermont

The ups and downs of Vermont tested my emotional and physical prowess as I hiked through the Green Mountains.

Watch as I tramp my way across Vermont.

Having recently visited Boston for five days, I was back on the trail and entering Vermont. My feet and knees were extremely sore. I had walked around Boston so much I don’t think my body got much of a break. I felt like I needed some more days off after my days off! Nevertheless, I pressed on past North Adams and Williamstown, MA. and into the mountains. It wasn’t long before I reached the state line and entered Vermont. This crossing was also the trailhead to the Long Trail, which the AT shares for 100 miles.

I immediately noticed how many more hikers were on the trail. All these energetic hikers with overstuffed packs were just beginning their Long Trail hike. It was interesting to talk with them; they had positive attitudes and were full of excitement just as I was back when I started. Now I felt hardened by the trail and was irritated by their populace on the trail. I wanted some peace and quiet after Boston! The shelters and campsites were crowded with hikers and eventually I began assuming any new faces were Long Trail hikers and not any AT hikers I hadn’t met yet. 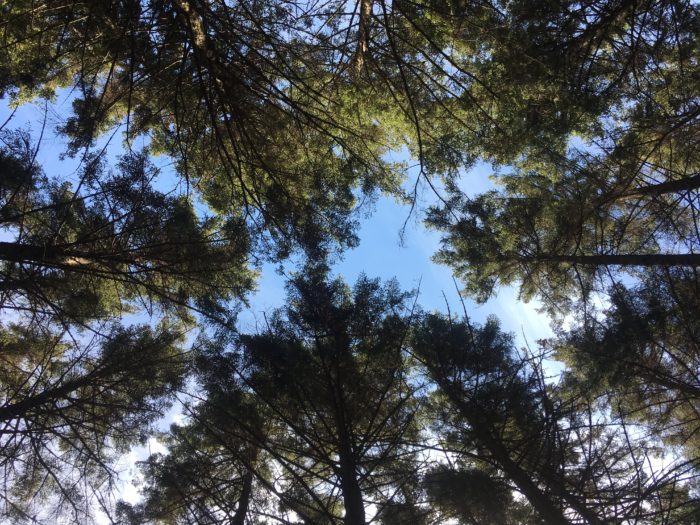 As I hiked through the Green Mountains I was reminded of northern Michigan. The forest looked familiar, with mossy rocks and large pine and cedar trees. I hadn’t seen white cedar trees on the AT as of yet. Beaver dams popped up everywhere and I was amazed at how well-engineered they were, creating huge ponds of water. I was still feeling rather winded with a sore body. Maybe all my time in Boston had softened me up. 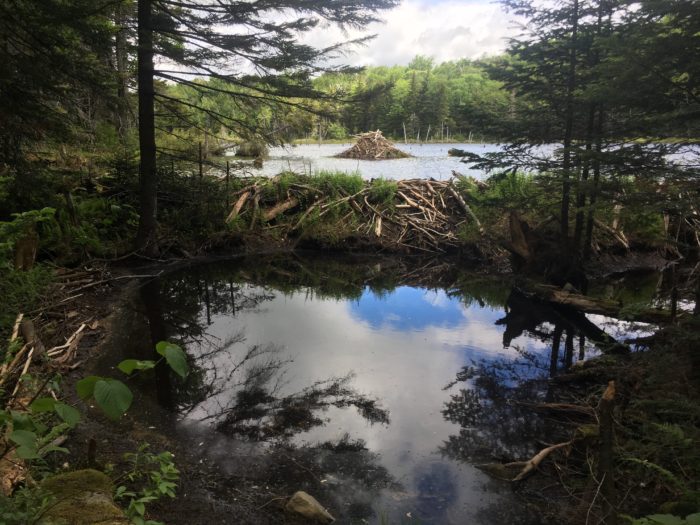 At one shelter a hiker offered me some broken pita bread. I normally don’t accept finger-food from other hikers for sanitary reasons but I was hungry. Later that night my stomach was gurgling with all sorts of noises. I really hoped I’d make it through the night. By morning all was well and I dodged a bullet.

As I hiked along, I decided to give myself a rest and set up camp along a gorge. There was a perfect spot for my tent with a fire pit and everything. I stripped down and went for a frigid dip in the river before making a fire and relaxing before sundown. I needed more moments like this. 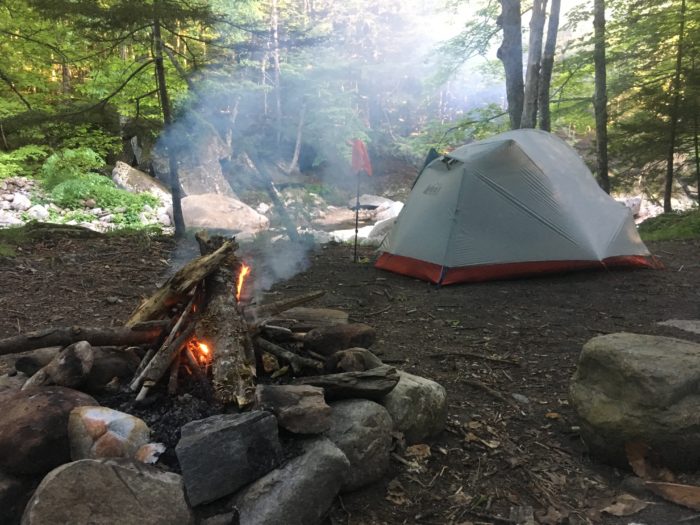 My big left toe began hurting one day. I checked for blisters but nothing was rubbing. As the pain became worse I realized I had an ingrown toenail. Ouch. What can you do when you’re out in the woods? I persevered but planned to stop in Rutland, VT, for a much-needed break. I hiked past the main road into town only to find the next road to be very quiet and impossible to get a hitch. And so I hiked with my painful toe up Mount Killington.

This climb proved to be exhausting and probably the worst thing for my toe. I was constantly subbing my feet on rocks and roots. However, the view from the top was as rewarding as it was trying. I saw a beautiful sunset and a sky full of stars that night. And to make things better, I had less than 500 miles to Katahdin! 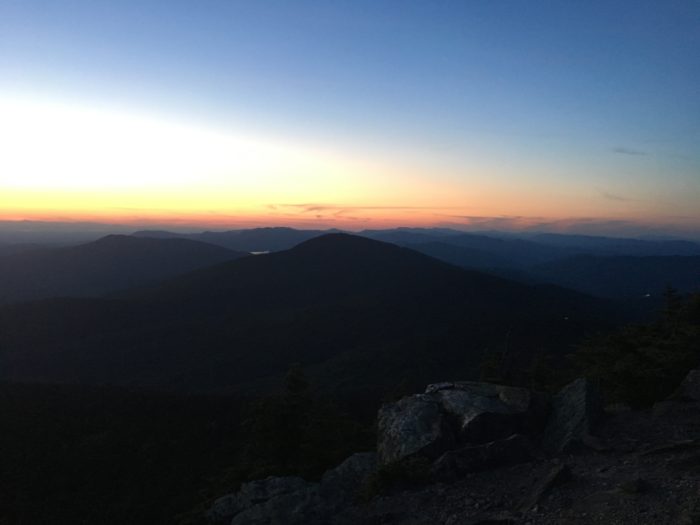 At last I was able to say “so long” to the Long Trail and continue on in peace. The Long Trail kept north as the AT turned east. It wasn’t long before I passed another road with a bus stop into Rutland, VT. I planned to stay only one night at the Yellow Deli Hostel but ended up getting sucked into two. My body desperately needed the rest. I was also able to soak my ingrown toenail which now had become infected in some Epsom salts and picked up some antibiotics. Over my two nights in Rutland I saw several movies at the local theater and conversed with members for the Twelve Tribes that runs the hostel. 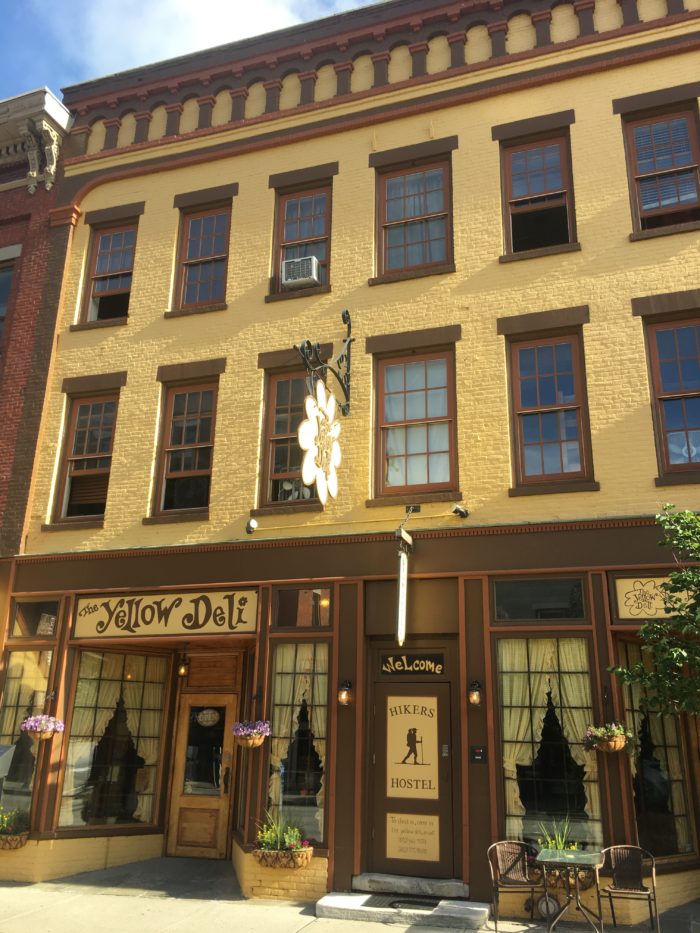 One of these tribe members was Yonatan. His name was given to him when he joined. It’s Hebrew and they are given names based on the meaning behind the Hebrew name and how it fits their personality. Yonatan was in his late 40s and came to the community five years ago. He left for five months last year when he was feeling selfish. After having fun and being on his own he realized he belonged back in the community and returned in February. It was very interesting to hear his story. Though the group has religious beliefs that I don’t agree with, they are still people at the end of the day and focus on a communal lifestyle and love. At least that I can agree with.

Talking with Yonatan made me think about my journey on the trail. It’s true that I embarked on this hike as a personal quest to find deeper understanding of myself. It has been very introspective. And at the same time, some of my favorite memories and times of growth on the trail have been when I’ve interacted with others. It’s truly fascinating to learn everyone’s story and how we all impact each other, even in the slightest ways that may be imperceptible. A simple act of caring creates an endless ripple.