“I don’t think there’s anything more painful than regret,” says Stacey “Iron Will” Kozel, the legendary quadriplegic 2016 AT thru-hiker. “On the tough days I remembered my days in the hospital…The worst day on the trail is alway better than even the best day in the hospital…I don’t ever want to take the fact that I am able to push myself in my wheelchair or balance on my braces for granted.” 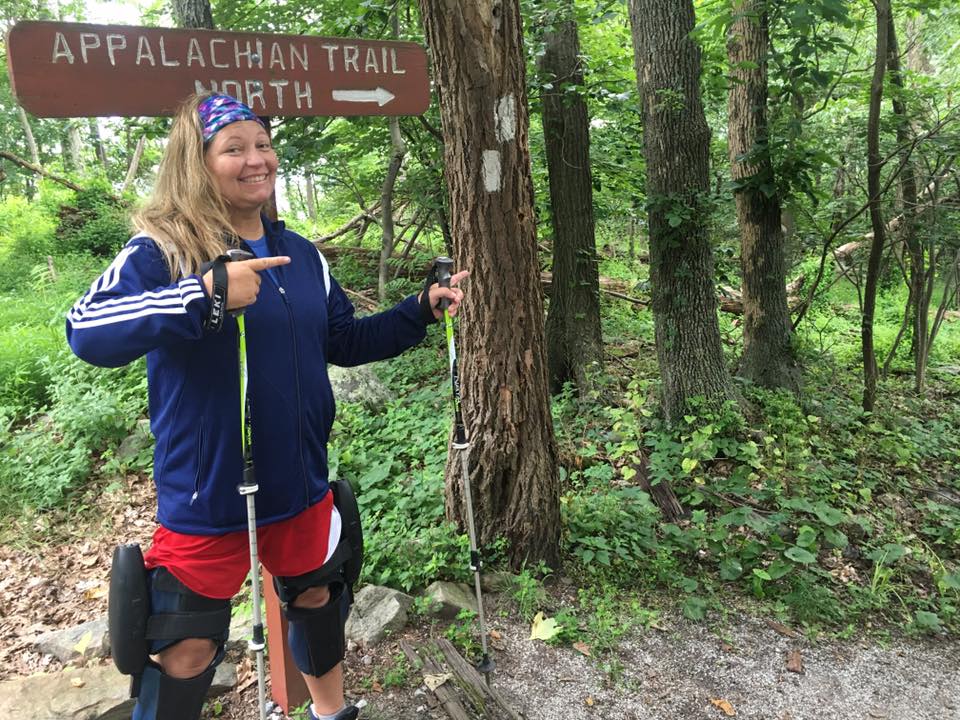 Kozel, a 41-year-old Ohio native, grew up playing sports, excelling at softball and soccer. “I was the type that came home after a game and worked on finding ways to improve my game. It’s the same thing I do now, but I use it to find ways to push my body to do things, like hiking.”

Kozel  planned to compete throughout college, but she was diagnosed with systemic lupus (SLE)—an autoimmune disease that falsely attacks healthy tissue. In 2014, the combination of a lupus flare-up and a car accident left her legs permanently paralyzed.

“Nobody expected me to be able to get out of my power wheelchair or be able to balance upright on braces… but they never discouraged me from working at it,” says Kozel.

The source of Stacey’s physical strength comes from her ability to move her hips, as well as everything from the chest up. It’s an elaborate balancing act: To take each step, she has to swing her legs forward to catch herself from falling. Her orthotist goes as far as calling Stacey’s walk “falling forward.”

“ looking out the window from my hospital bed and dying to get outdoors. Once I was balancing well enough on my braces, spending months outdoors seemed like a great idea.” When Kozel began her hike on March 24th, she didn’t have a huge amount of backpacking experience. “One of the biggest reasons I picked the AT was because of the road crossings. If I had any issues because of lupus or my braces, I knew I could get off in a certain amount of miles.” 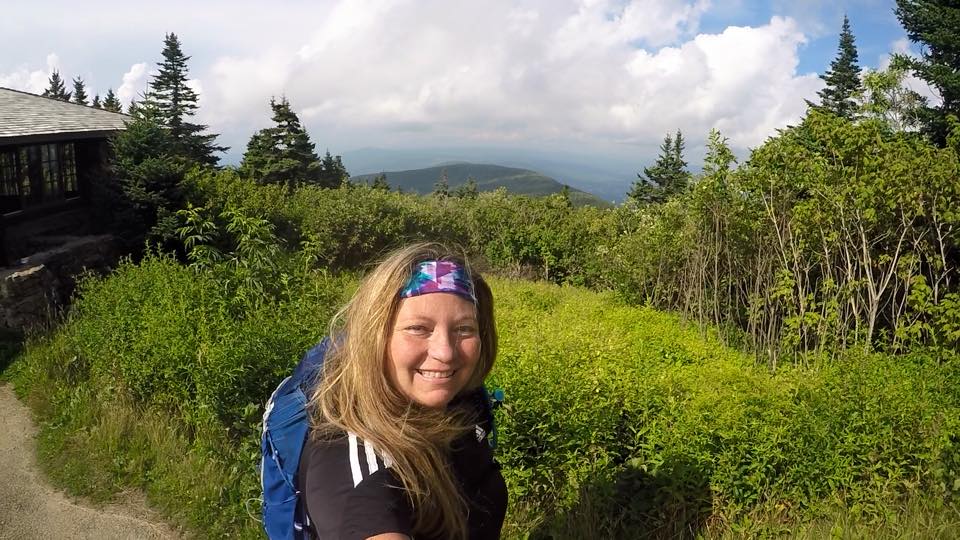 Choosing the gear for a thru-hike is an oft-agonized over part of the preparation, but Kozel wasn’t just facing her own indecision—she was battling her insurance company for the braces she would need for this adventure. The C- Brace utilizes hydraulics to allow for a greater bend in the knee, offering more give on uneven terrain. Combined with her “Iron Will,” (both a character trait and her trail name), acquiring these braces would change the feasibility of completing a thru-hike.

After a year of appeals and careful documentation by Kozel’s team of doctors, prosthetist, physical therapists, and occupational therapists, Kozel was able to get the C- Brace. Kozel used the standard locking Knee-Ankle-Foot orthoses (KAFO) braces when her hydraulic ones locked up or were unable to be charged. The C- Brace is much heavier than the KAFO brace, so when it malfunctioned, it wasn’t worth the extra effort and weight to hike in them. Throughout Vermont, New Hampshire, and Maine she used the KAFO braces.

“If I look at where I was in the beginning of the trail, I was really still learning how to ‘fall forward’… I have to use my upper body to compensate for what my legs and lower body do. By the end of the trail I got much better at learning to ‘fall forward.’ I trusted myself more and more.”

To accommodate the braces, Kozel used Adidas trail runners two sizes larger than her usual shoe size. Her prosthetist built a strap from the back of her shoe to the back of the brace to keep the shoe on, and Kozel used her upper-body strength on steeper terrain to maintain her balance and catch herself when her braces started coming out of her shoes. “As I was taking a step up the mountain, my brace would slide out the back of my shoe. I saw my life flash before my eyes a couple of times when there wasn’t much I could do in certain areas.” 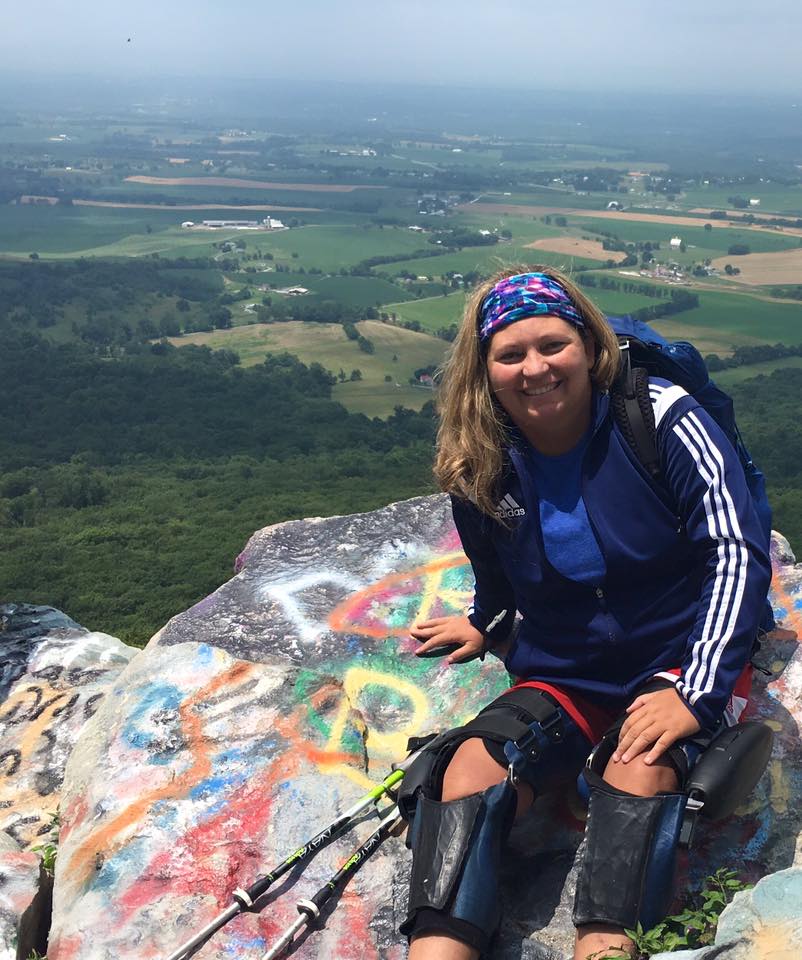 Kozel chose to hike solo and kept her schedule flexible. “I didn’t need to worry about slowing anyone down and could hike at my own pace.”  When it came to zero days, “I tried to listen to my body. I took lots of breaks and when my spasms were really bad I would take a zero….Most of my zero days were used because of my braces malfunctioning. I had to go back to Ohio a few times to try to get them fixed.”

Weather provided its own challenges for Kozel. The farther north she hiked, the colder the weather she encountered. The temperature changes impacted Kozel’s neuromuscular system and she experienced muscle spasms and swelling. “There were nights in Maine that I was too cold in my tent, so I rested a couple hours and just got up to hike. I had to get my legs up because I had issues with swelling.” The braces aren’t waterproof, so there were times she had to hide in her tent until the rain stopped.

“I could probably write a book just on my attempts at Katahdin… Each attempt had different obstacles, and after each fail I felt like I was even more prepared for the next attempt… but Katahdin would throw in another obstacle.” On her first attempt, her braces weren’t working, “and it felt like I strapped cement to my legs and decided to climb boulders straight up a mountain. Every step was excruciating.”  She had to go back to Ohio to drop off her braces,  deciding to finish the trail in the KAFO braces. She flipped back down to Vermont after this attempt, keeping the option to flip back up in mind. After this, Kozel regained her previous momentum and continued making good time. She finished her hike as a NOBO on October 9th, but not before two more attempts to summit Katahdin.

With each attempt there was about a mile to the top of the Northern terminus. “Each attempt seemed to get more difficult, instead of easier. The last attempt I was concerned about hypothermia and the wind kept knocking me down but I was thankfully able to crawl to the summit.” It was around one in the morning, with no views and no one else to witness, Kozel had only her own sense of accomplishment. 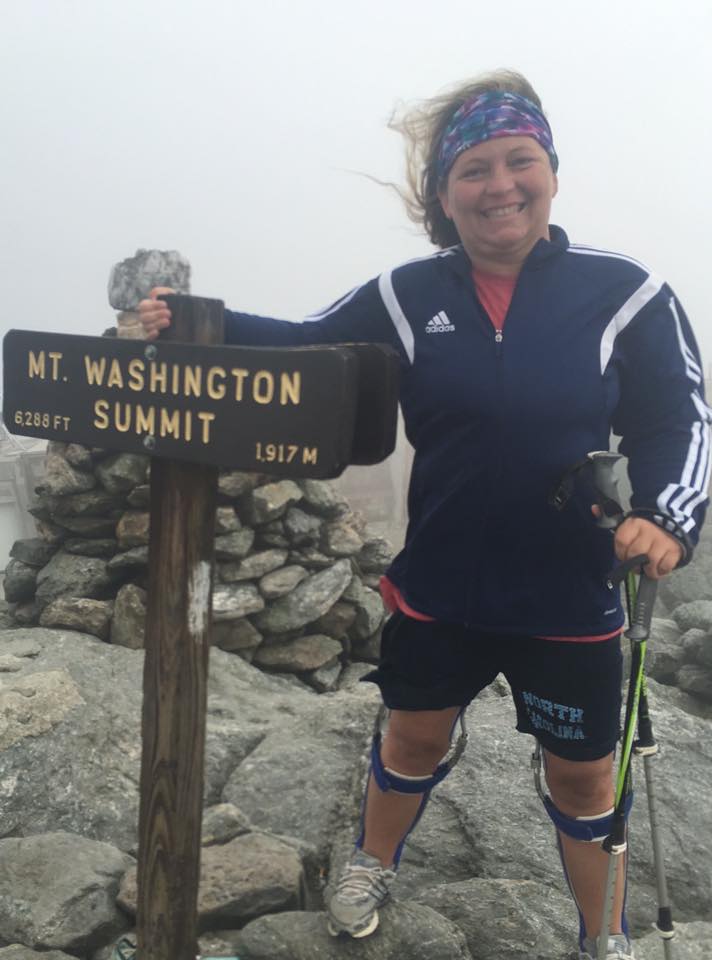 “I did find myself thinking about even small things that could make a big difference to help more people be able to enjoy the trails.” Kozel reflects and shares daydreams she had about the ATC installing benches that would blend in with the trail scenery. “I would like to see more trails somewhere that would allow more people, regardless of mobility issues to experience the outdoors and be able to challenge themselves and disconnect out in the wilderness.” Adding that much of the world, whether it’s in nature or in society, is just not outfitted for those facing mobility challenges. She maintains that the challenge of the hike was what in part drew her to it, stating that the main purpose of her mission is, “hoping to prove just because lupus kicks my bum on a daily basis and that I am paralyzed, doesn’t mean my life is over. It may take me longer and I may have to get creative, but just because someone has a disability doesn’t mean they shouldn’t be out there.”

With a new season of hikers preparing to for a life in the mountains, Kozel’s story is one to keep close. Her determination, realism, and unwavering faith is what thru hiking is all about.

“Everyone is going through something out there, and I hope they never give up. We never know what we can accomplish if we give up too soon. There are always people out there that will have doubts and tell you that you can’t do something, but only we know what we are capable of so we need to keep fighting for our dreams.”

For more on Stacey’s story, check out earlier coverage by The Trek.