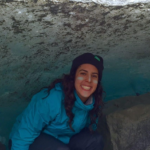 Week 17- The Vermont Mountains and 500 Miles To Go

During the night the temperature dropped into the 40’s and a light rain started falling. In combination with the loud wind this meant that I didn’t get a ton of sleep, and woke up in the morning feeling cold and tired. Ben was feeling the same way, and the forecast for the next night was even colder temperatures, so we set our sights on a hotel room in Manchester Center. The morning was full of small ups and downs, and it was good to get moving in the chilly wind. Manchester Center was over 25 miles away from the shelter where we started the day, which we knew would be too far for us to go in one day (especially with a hiker not used to pulling big mileage days), so we decided to take the Stratton pond trail to blue blaze around Stratton Mountain and cut off a couple miles between us and town. Cue the gasps from the readers. Honestly, this wasn’t the first time I’ve blue blazed on trail. Sometimes when a side trail offers a cool waterfall, views, or slightly easier terrain on a tough day, I’ll choose the blue blaze over the AT. I’m no purist, so missing a handful of AT miles when I think there’s a better trail option doesn’t bother me, and I like the option to choose my own adventure via alternate trails every once in a while. Feel free to save any convents about the validity of my hike. Anyway, after we made our way to Stratton Pond, we continued down the trail, which stayed pretty flat although rocky. 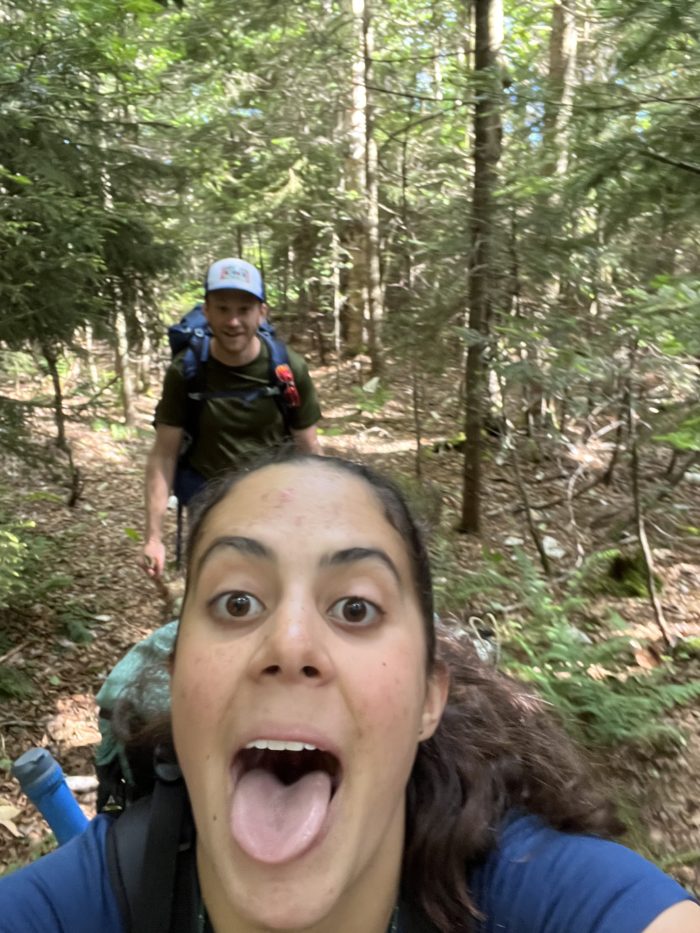 Finally we made it to the side trail leading down to our hotel, and Ben and I slowly made our way down the very rocky road. Even with the blue blaze, we’d done a 22 mile day, and our feet and legs were feeling very sore as we got to the hotel. After a shower and pizza things were starting to feel better, and we dozed off almost immediately.

After a big breakfast at the local diner we got back on the trail, ready for another big day. We started ascending Bromley Mountain almost immediately, which was crowded with weekend hikers but wasn’t too hard of a climb. The last quarter mile connected us to part of a ski run, and we paused at the top next to a ski lift to take some pictures of the view, but the strong and cold wind quickly got us moving again. After heading back down Bromley the trail started sharply back up to Styles Peak, which felt a good bit steeper than Bromley, and had a series of three mini peaks along the top which all involved rock and root covered trail. Fortunately the long and gradual descent gave us time to recover, and pretty soon we were cruising across bog bridges and through mossy forests. The last little climb of the day up Baker Peak was mostly on large rock slabs, but the trail provided great views of the nearby mountains, so the climb didn’t feel too tricky. 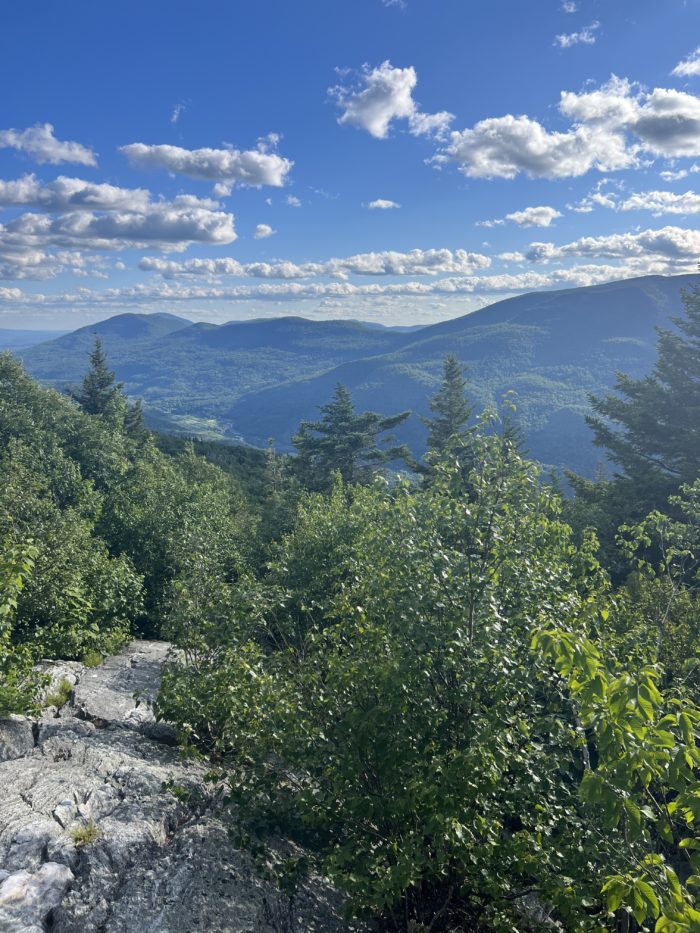 A couple miles later we pulled into the Lost Pond Shelter and set up our tents. Unfortunately there was a family with a couple small kids in the shelter, and despite tenting a little ways away we could hear the kids yelling quite clearly while we set up and cooked dinner. With our fingers and toes crossed that they’d quiet down soon, we headed to sleep once dusk fell.

Ben and I set off early, glad to get moving in the chilly morning. The trail headed down for a while before it reached Little Rock Pond, where we stopped to admire the pretty pond. There were tons of eastern newts swimming in the shallows, and fish jumping all across the pond, it was a very pretty sight and would’ve been great for swimming if it had been a little warmer. After walking around the pond we started uphill and the forests quickly changed from mixed hardwoods to tall pine trees covered in a thick layer of moss at the base. We paused for lunch among a pile of large white boulders, where past hikers had created numerous pictures and cairns from the smaller rocks in the area. 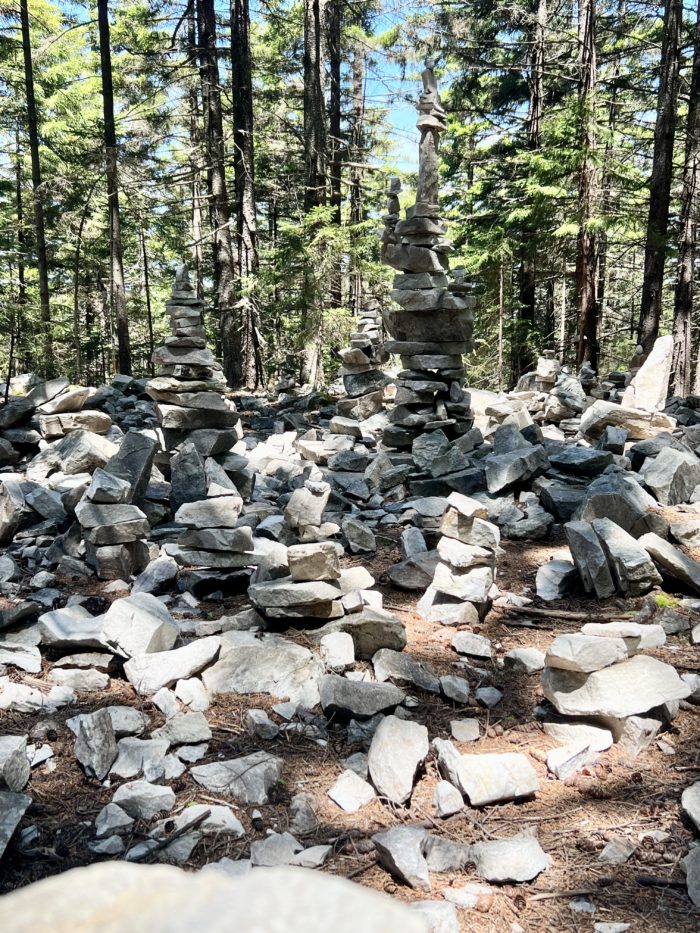 Rock cairns in the mossy forest

After making our way out of the thick pine forests we descended almost 1500 feet and crossed a parking lot before starting to climb all the way back up to our previous height on the next hill. This climb felt long and arduous after having already made a similar climb up the previous hill, and we slowly made our way up the trail with many pauses to catch our breath. Finally we started descending and after a while we pulled into the Minerva Hinchley shelter for a break and to rest our legs. We considered staying at the shelter, but it was only 3 pm, so we decided to push a little further. Fortunately after the shelter the trail went over a small series of little hills that weren’t too tricky, before starting a steep descent toward Clarendon Gorge. We carefully placed our feet on the thin roots and loose dirt that made up most of the steep trail down to the gorge, and luckily managed to avoid slipping. The gorge was very cool, with a bouncy green bridge overlooking the quickly flowing river, and plenty of flat tent sites covered with soft pine needles. 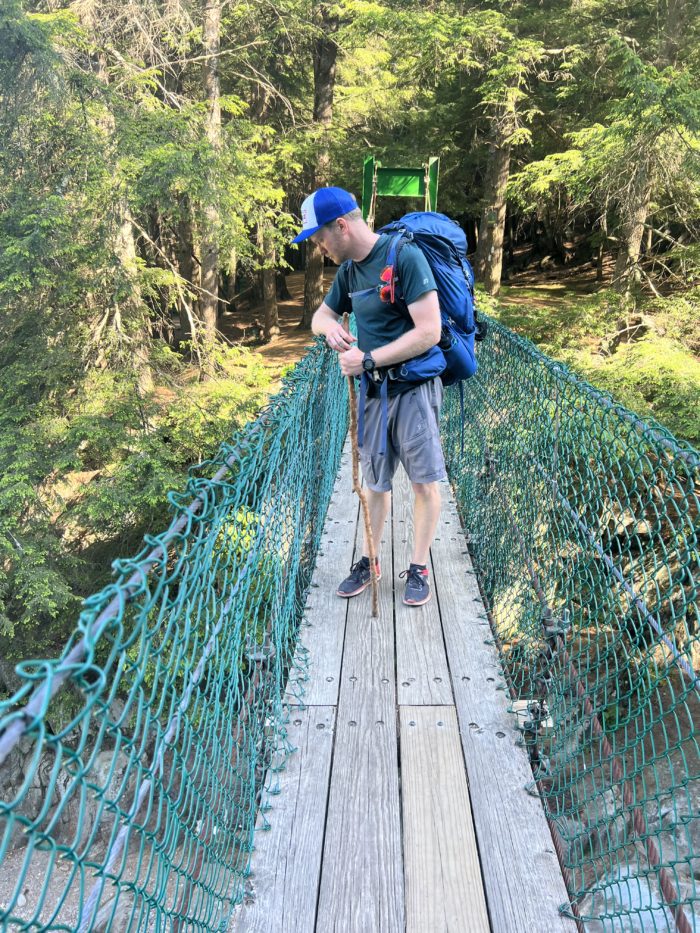 Ben on a bridge

We dropped our packs and ate an early dinner before splashing in the river and exploring the area a bit. It was a very relaxing evening, and I enjoyed getting to stop hiking a little earlier than I usually do and just hang out around camp. As dusk fell we set up our sleeping bags and got ready for bed with the burbling river right next to us.

After a great night’s sleep Ben and I crossed the Clarendon Gorge bridge again and began the first uphill of the day. And It. Was. Steep. With grades of almost 950 feet of elevation gain per mile, the first two hills were a tough way to start the day, and we had to pause for breaks numerous times. Fortunately after the hard ascents we had a couple of miles of flatter terrain, and in this section we passed a sign saying there’s only 500 miles to Katahdin!

The miles to go are decreasing!

Slowly the flat trail started angling upwards, and we began the climb up Mount Killington, which was the first mountain over four thousand feet since early in Virginia. The climb wasn’t as steep as those earlier in the day, but it was long, and it took us hours to make our way up through the forest toward the summit. Finally we dropped our bags at the shelter and climbed, hand over hand sometimes, to the peak. 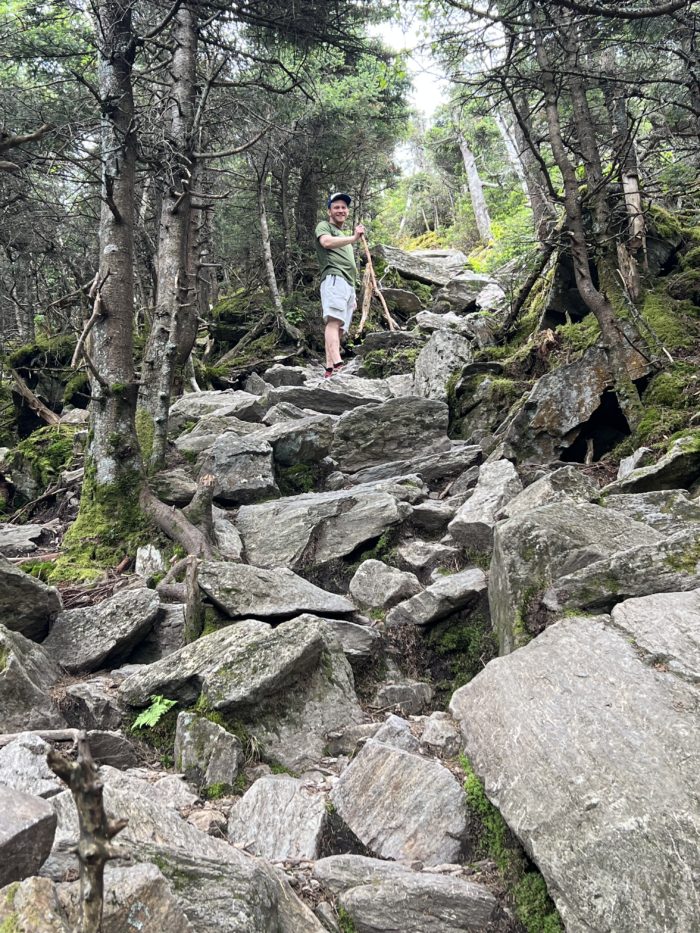 The last 0.2 miles to the summit were so steep!

Unfortunately even though the views at the top were great, the black flies were swarming worse than anywhere else I’ve experienced on trail so far, and we only took a couple pictures before diving down toward the protection of the trees again. 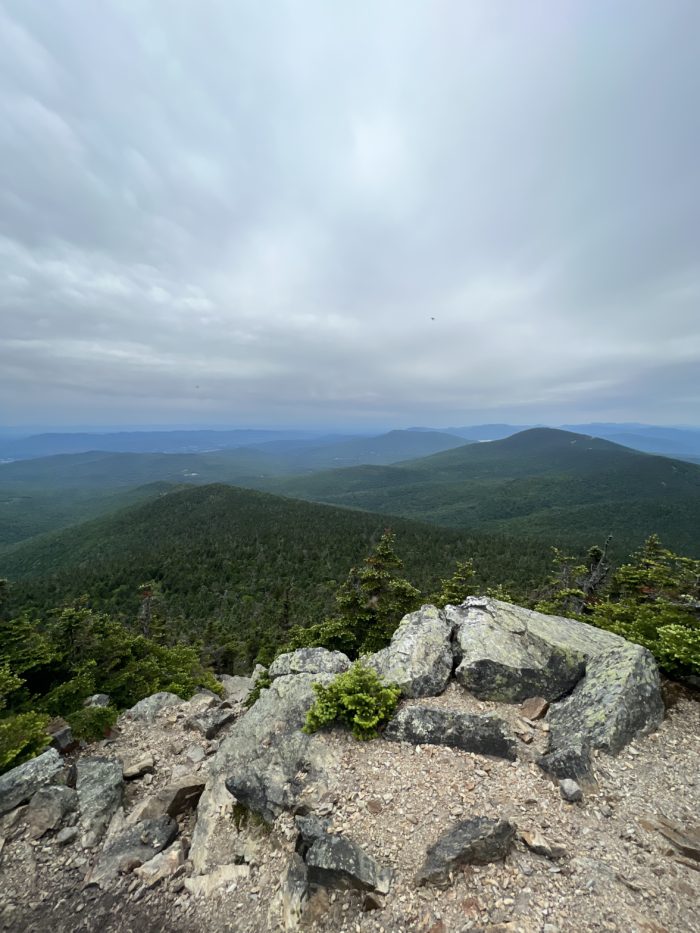 The summit of Killington

After a break that was too short due to the biting flies, we headed down the other side of Killington. We’d Ben pushing hard most of the day with free breaks, and I started feeling tired and grouchy on the lengthy downhill, despite passing the 1700 mile marker. 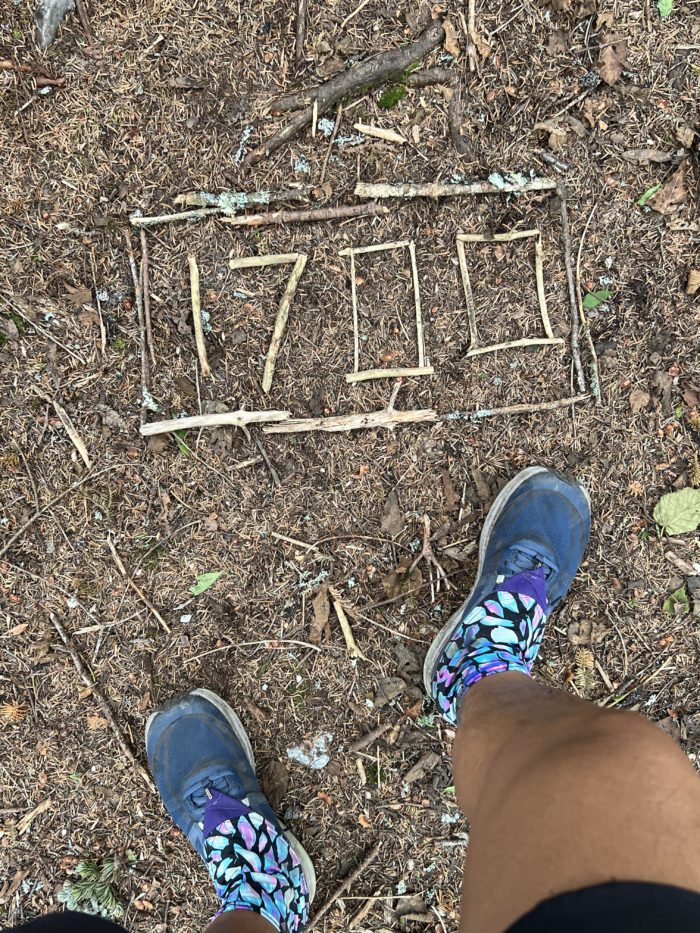 Once we reached the next shelter I was very glad to sit and relax for a few minutes which was a good start to improving my mood. After the quick break I was feeling better, and Ben and I worked up the effort to go two more miles to the next road where we did a quick road walk to the Inn at Long Trail. The inn was connected to a great Irish pub, and we stuffed ourselves with great food before heading to bed.

After getting ready in the morning we headed back down the road to get back on trail for a quick four mile day into the town of Killington. The trail was pretty easy compared to the last couple days of big climbs, and we cruised along for only a couple hours before heading into town, where we were going to stay for a couple of zero days. A lot of walking on roads with our heavy packs was increasingly tough on our ankles and knees, and when we finally arrived at our hotel we were very happy to drop our packs and start relaxing.

A couple of zero days! I hadn’t had a zero since the end of May, and I was very ready to have a couple days of rest before heading into the Whites. So much food consumed and so many showers taken! A few more days in Vermont and then New Hampshire here I come.
< Previous Post
Next Post >