What Do You Do When the Trail You Love Gets Abusive?

I left Shaw’s with 85 miles left to do in the 100 Mile Wilderness carrying five days food.  A food drop was scheduled four days in.  I hiked up Barren Mountain and ate lunch while watching raptors soaring on the thermals rising next to the cliff.  A perfect start to the day.  It wouldn’t last…

The trail I love slaps me around

That afternoon, I was walking down a very steep descent after Chairback.  It was about a 60% grade.  The trail was made of huge slate blocks.  Slate tends to break on straight lines.  These blocks were rectangular prisms with perfect right angle corners.   I slipped and fell backwards.  While the details are a bit fuzzy, know I was about 6 feet above a woman climbing up the trail and when I stopped I was about 4 feet below her.  I know I landed on my pack first then flipped over slamming my face into the flat face of one of those big slate blocks.

The judges scoring this dive would have given me excellent marks for my rotation but major deductions for the landing.  Luckily I hit on the flat surface of the largest side of the block with my legs folding perfectly over the right angle.  While my face suffered most of the damage, I pretty much slammed into the block distributing the shock over my whole body.   I remember seeing blood splatter off the rock when I slammed into it.  I don’t think I lost consciousness, but the woman who witnessed all this seemed to get her rubber gloves on awfully fast.  I had a cut under my right eye and on the bridge of my nose, two black eyes and a few scrapes.

Cleaning up the mess

My unnamed witness helped me stop the bleeding and put a butterfly closure on the cut on my nose.  We couldn’t really put anything on the cut under my eye, because the outside end of it was on my eyelid and any sort of bandage would mean I wouldn’t be able to see out of that eye.  Luckily the bleeding stopped almost immediately.

Miraculously nothing was broken and I had all my teeth.  If I had landed on one the corners or had a tad more rotation so I hit head first, I wouldn’t have been so lucky.  Given this fall at this particular place, this was almost certainly the best of all possible outcomes.  I’d like to say that my finely tuned trail reflexes were responsible for this, but there was no control.  Reflexes never came into play; it happened too fast.  In a flash I accepted that I couldn’t really do anything, but let this thing happen and deal with the consequences afterwards.  I relaxed as I fell. Nothing broken?  Well that was totally unexpected!  Divine intervention or just random events?  Who knows?   In short, I dodged a bullet.  While I was a bit worried about a concussion, I never had the slightest hint of a headache.  That night I found bruises scattered at random spots all over my body.

I’m in the middle of nowhere and after my incredibly helpful witness helped clean me up and bandage the worst my injuries, I was alone.  The only way I could check on things at the end of day was to take scads of selfies. 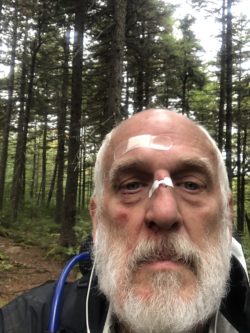 Right after the fall, but it actually looked worse the next day 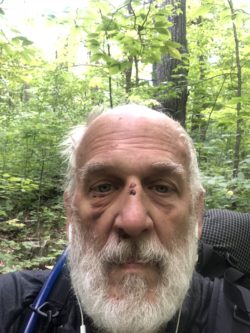 A couple of days later… “Ya gotta cut me, Mickey”

I definitely thought of quitting after this.  The trail I loved had slapped me around, but with over 2,000 miles behind me, I have a lot invested in this relationship and it’s hard to just walk away.  Wouldn’t it be best to ditch this one and find a trail who would treat me better?  Was it my fault?  Did I “make” the trail do it? If there had been an easily available exit, I would have probably been out of there.   What I had was a food drop at the Johnson Pond Road (Kokadjo-B Pond Road in Guthooks), but this was days away.

As I walked toward that rendezvous, I thought quitting every day.  Not just quitting this section either, but quitting the Appalachian Trail altogether.  I didn’t tell my wife about fall.  I didn’t want her to worry, but I also wanted to decide what I wanted to do first.

I stopped early at the Pleasant River Campsites to escape a day of relentless rain and messaged Shaw’s to push my food drop back another day.  All afternoon, I read and napped with the rain drumming on the taunt fabric.  Trying to think about only now, not tomorrow.

Refreshed, I headed north the next morning and only my audiobook kept me from wrestling with the idea that it might be time to not do this anymore.  I’m 67.  While I’m not oldest out here, but that fall made me question whether or not I can keep this up much longer.   After spending fifteen years hanging with eighth graders, I thought I was immune to feeling old, but I was feeling my years now and  wondering if I could/should keep doing this.  In spite of my book, thoughts about this kept running through my head.  There was definitely a PTSD component to this.  Steep downhill sections made me nervous as hell.

At White Cap Mountain, I got my first good look at Katahdin.  It’s freakin’ huge and there’s nothing anywhere close as large for miles around it.  You can totally understand how native Americans could see it as a holy place.  It called to me…drawing me to it.  I decided I would walk there, but not climb it this year.  I still have 105 miles in New Hampshire to do and if I can drag my ancient bones through them, I can tackle this beast too. 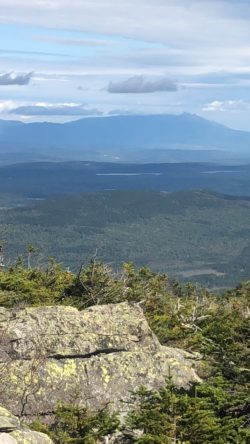 I met Poet (Hippy Chick’s husband from Shaw’s) to pick up my food drop.  They had heard about my fall and wanted to make sure that I knew he would take me out of there if I wanted to go, but I had battled that demon already and the trail was flat as a pancake for the next 50 miles.

The seductive elevation profile after picking up my food drop

After packing my food drop, I almost flew down the trail to Jo Mary Road.  Poet had told me that it looked like LL Bean was setting up trail magic there.  I found their kitchen and while it looked it was set up to feed legions of hikers, no one was around.  I set up camp just south of the road thinking maybe they would feed me in the morning.  Hope springs eternal, but the trail called my name early and no one was stirring when I left.  I read later that LL Bean employees planned to walk the whole AT in one day with groups spread out along the trail that day.  I was determined to make White House Landing that evening. 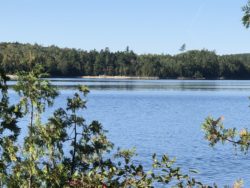 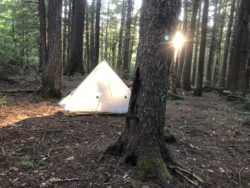 The sun shining through my home for the last month. 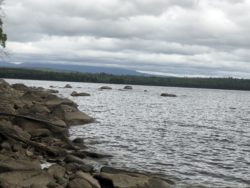 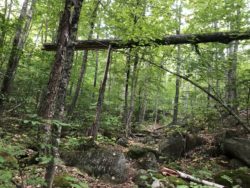 Classic widow maker! The trunk had splintered and only a small sliver supports virtually all the weight of the tree 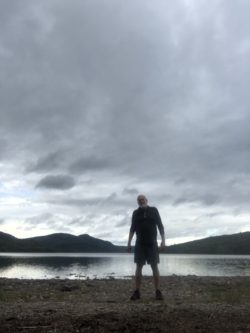 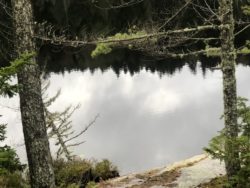 The trail in the northern half of the 100 Mile Wilderness winds around a series of lakes.  They’re beautiful and isolated.  I spied a float plane parked on the beach across from me at one them.  A few had isolated camps accessible by logging roads.  White House Landing is an old camp that will pick up hikers if the phone them (one bar) from Mahar Landing.  They offer a cabins, a bunk room, showers and two meals.  Some hikers bitch about the cost, but I don’t think they really understand economics of supplying these services in such an isolated place. 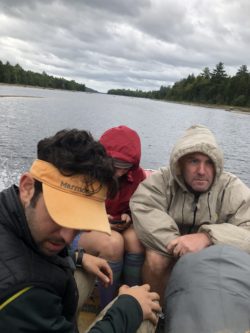 The boat to White House Landing 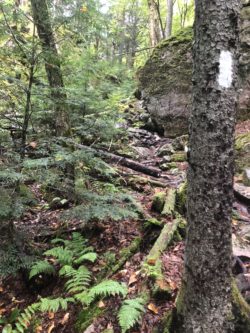 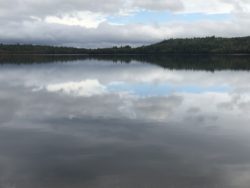 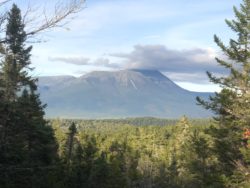 My last day on the trail I hiked into Abol Bridge.  After taking a shower and putting on my cleanest dirty clothes,  I ate junk food to kill time until dinner opened for some serious eating.  I hitched a ride into Millinocket and checked into the hostel there.  While I was doing my laundry, the shuttle came in from Baxter with a load of hikers who had summited Katahdin that day.  Many of them, I had met along my journey.  They looked exhausted, but satisfied.  A few were dealing with realization that their hikes were over and wondering what tomorrow would bring.  As I joined a large group of celebrating hikes that night, I thought about just going ahead and climbing Katahdin the next day, but the weather forecast promised a high temperature of 37 and 35 MPH winds at the summit.  I was ready to be home anyway.

Since I learned this summer the Whites are a terrible place for a geezer to look for his trail legs, I’m planning to go out for a few weeks before tackling the Whites.  I’m resolved to try to hold onto my current level of fitness by jogging.  Since I now live in Maine, the weather will almost certainly get in the way of those plans, but I’ve always wanted to take up cross country skiing.  There’s also a part of me that wants to just ditch the AT and do a long section of the PCT.  Who knows what the future brings?

After a friend posted something on facebook about this post, I felt I needed to add something…

I probably went a bit dark on this one, but if my blog is going to truly represent what you have to deal with out there, I felt I had to go there. Odds are others will have a fall like this.  Maybe reading about this will help them deal with the consequences.  There are scads of trails that don’t have the lumpy bits that the Appalachian trail has. I walked 285 miles this trip. I lost 20 pounds. Coming back, I’m able to run 20 miles a week right off the bat. My. resting heart rate is 55. Last year when I left he trail, my HDL/LDL ratio was good for the first time in my life. Exercising 12 hours a day in the real world isn’t something any of us will do; that’s pretty much normal on the trail. I’m going back to the trail next year…maybe not the Appalachian Trail, but some trail.