Massachusetts – My State of Luxury 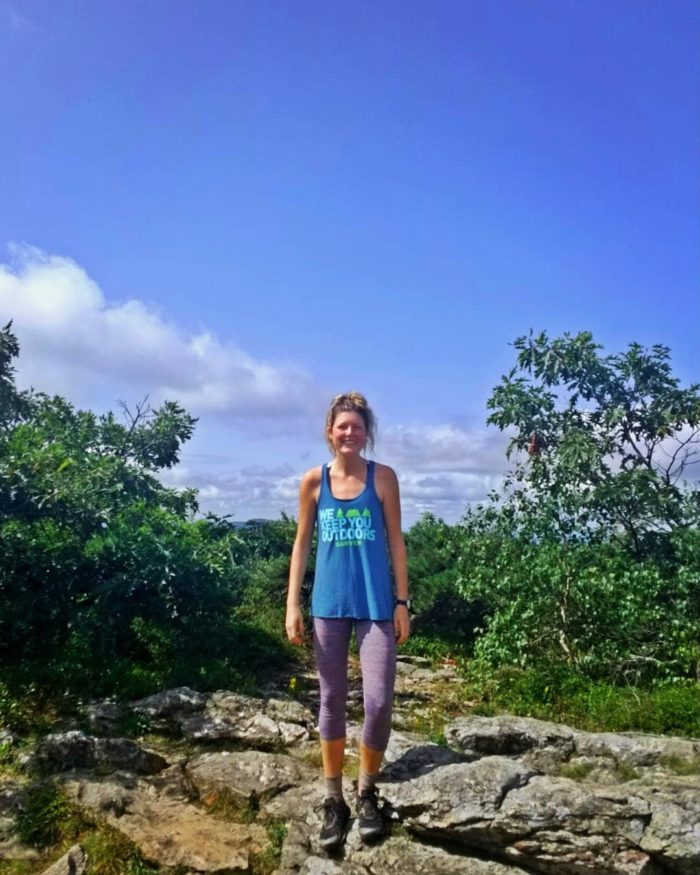 After doing so many miles in Vermont, I really slacked off. The people there were wonderful so I’m relieved I didn’t just blow through it. When I think back on Massachusetts in the future I’d like to remember the people mostly, but I’m afraid I’ll be stuck on the memory of brushing my hair for the first time on trail and seeing half of it come out in the hairbrush. 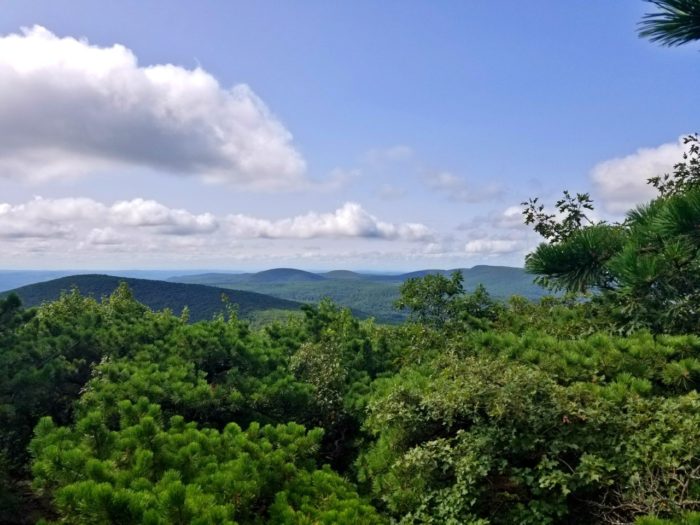 I crossed into Massachusetts and the mud of Vermont did not magically end as I was expecting it to. It continued on for a few miles but all was good because after only 14 miles I took a grocery store break. A long 0.5 miles off the trail and down the road was a Stop N’ Shop. I couldn’t pass up some fresh fruit and veg so there I went. Dreamer and Sun Chaser had the same idea because I ran into them ingesting thousands of calories right outside the store. Dirty Dan was introduced then as a fellow SOBO from Minnesota. We sat around for a good while and joked about pitching our tents around back (semi-serious), prolonging the afternoon miles that were originally planned. 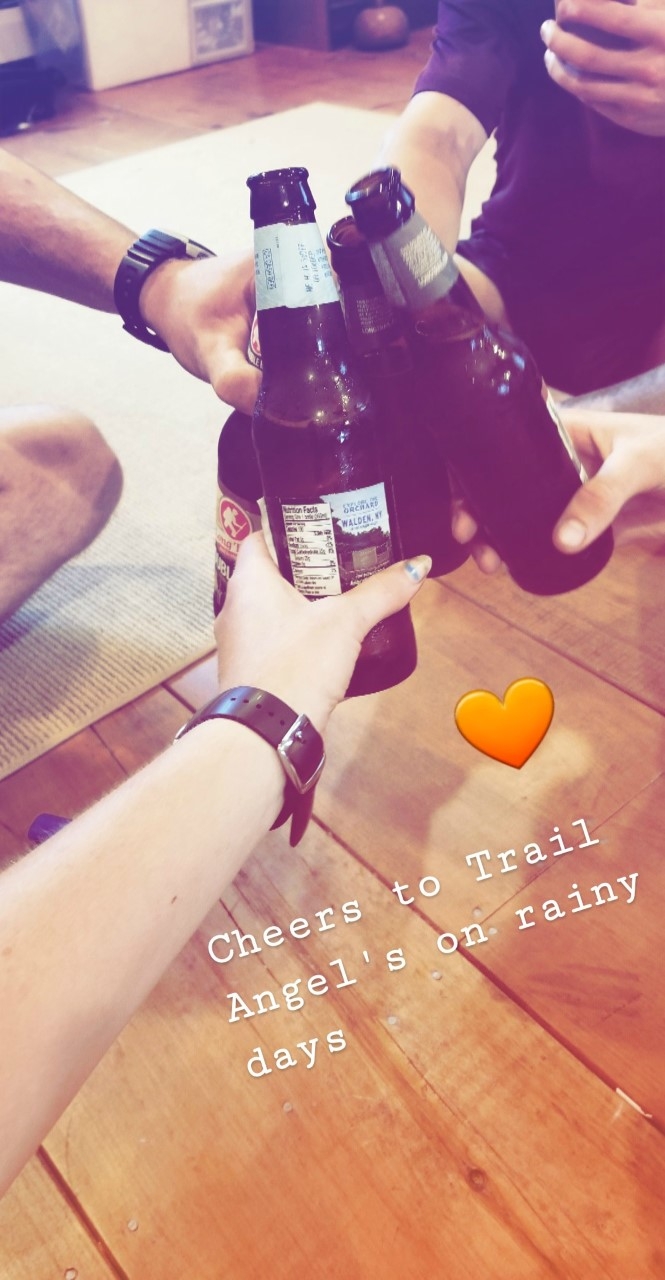 Those miles didn’t happen because a man intending on doing some grocery shopping ended up with more than groceries in his car. At first I thought it was too good to be true. He sent us in next door to grab any beer we wanted while he picked up some dinner to cook for us. With four rank hikers, four packs, groceries, and beer, John sure had a packed car.

Back at his house (built in 1760) we met Drop Bear. She’s over here six months of the year keeping busy hiking, having already completed the Appalachian Trail in 2015. She often trolls the streets looking for hikers so the four of us at once were sure a surprise for us. I didn’t hesitate to hop in the shower that was offered, scrubbing at the 22 layers of dirt that had taken over my legs. One by one we emerged as human beings again, laundry done, and before we knew it – dinner was ready. 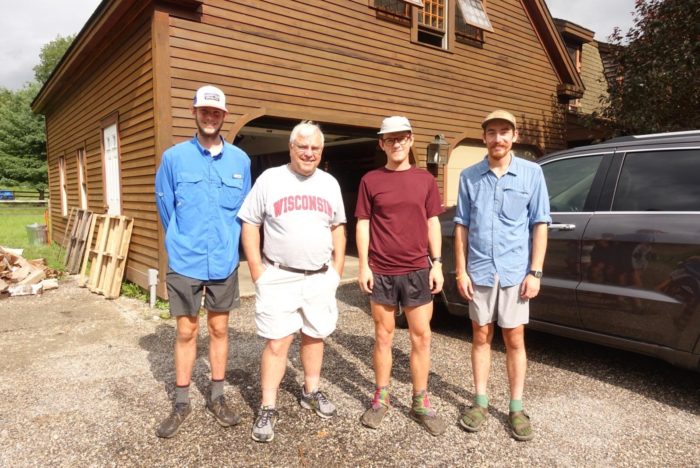 John, Drop Bear, Dreamer, Sun Chaser, Dirty Dan, and I sat around the dinner table feasting on salad, homemade dressing, oven-roasted vegetables from his garden, chicken, burgers, and wine. Conversation was never lacking. There were so many opinions to be heard as everyone at the table was from a different part of the world. (Five countries, and three faraway states.)

It didn’t stop there. Breakfast included coffee, blueberry pancakes, real maple syrup, and sausages. The three guys headed back out on trail while I did not. I’m telling you, Massachusetts, I’ve embraced the slacker way. Highlights included: another sleep in a bed, a tour of the property, hand-picked raspberries, lots of ice cream, food, food, food, and watching a downpour from the comfort of the veranda – knowing all too well the guys had been caught in it. People like John make the thru-hike so much more enjoyable. He was the happiest man, and to be able to provide for people like us was a great experience for him also… a true trail angel. 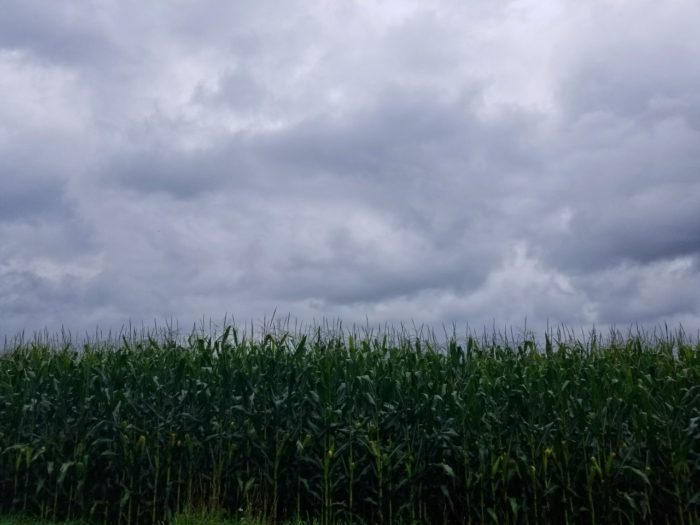 Sometimes the AT goes through corn fields… a bit strange but cool.

I would’ve liked to stay another two weeks but I was back on trail the next morning, climbing Mount Greylock. It’s the highest peak in Massachusetts and forced my butt quickly back into hiking mode. Dreamer had previously told me it was 20 miles to the next town, Dalton, where there was a man named Tom who let hikers tent in his backyard for free. Twenty-four miles later, I got into town. Hey, Dreamer, 20 is not the same as 24, FYI. I made it anyway, and got to meet Simba, with Dreamer and Sun Chaser in tow. He’s a friend of Dreamer’s who walked together for many miles last year on the Pacific Crest Trail (PCT). Tom even put out coffee and doughnuts for his tenting guests. We got a late start in the morning, as town days do go, and left at 11 a.m., in a 20-mile mad dash to Upper Goose Pond. It was rumored to have trail magic that included dinner and breakfast. The rumors were true, though we made it only in time for the cherry pie dessert, and a refreshing dip in the pond. The morning made for a happiness that is coffee and pancakes too. 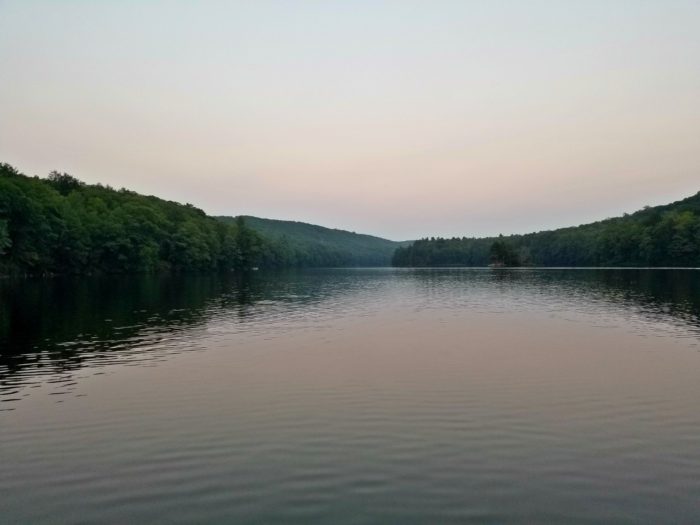 You’re probably a bit thrown off – where did the wilderness go? I’ve been wondering that myself. The northern part of the trail started off so remote, but the more south I go I’ve come to realize that in America, much is made accessible no matter where you are, and by much I mean food. It’s a skill to walk past a hot-dog stand and keep going – quite obviously a skill I lack. It’s proving to be necessary that I work harder to avoid indulging at every convenience (mostly for my bank account’s benefit). 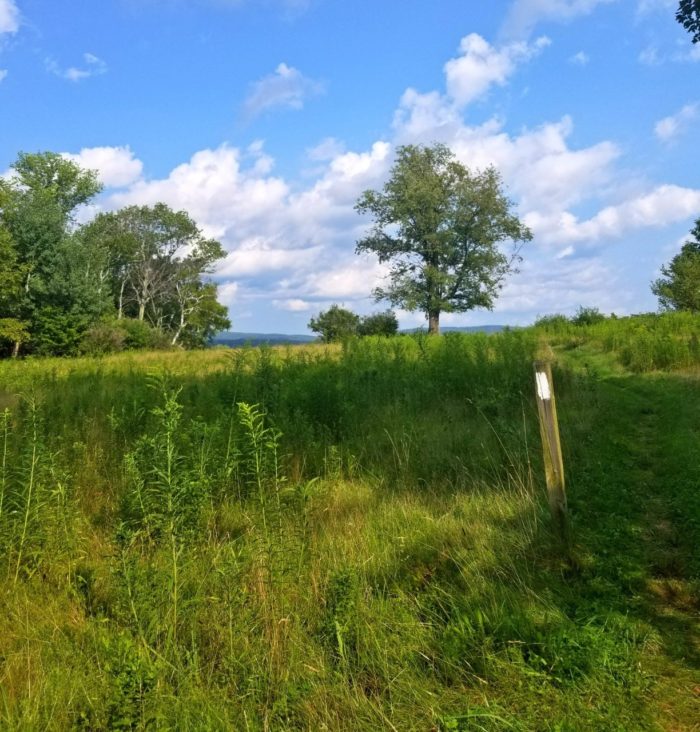 The rolling, green hills of Mass.

Seventeen miles were done after eating a billion pancakes, followed by a measly 12 the next day to reach Great Barrington. This is where I became bald. My mom visited and she brought a hairbrush and heavy-duty conditioner. My hair had actually dreaded itself in one spot, and the rest was matted into what looked like something a cat coughed up. It’s the hardest thing I’ve had to deal with this entire time. Hair grows back – I know, I know – I’ve accepted it, whatever. What I’ve lost in head hair I’ve basically gained in leg hair; sorry if that was too visual but that’s life out here. 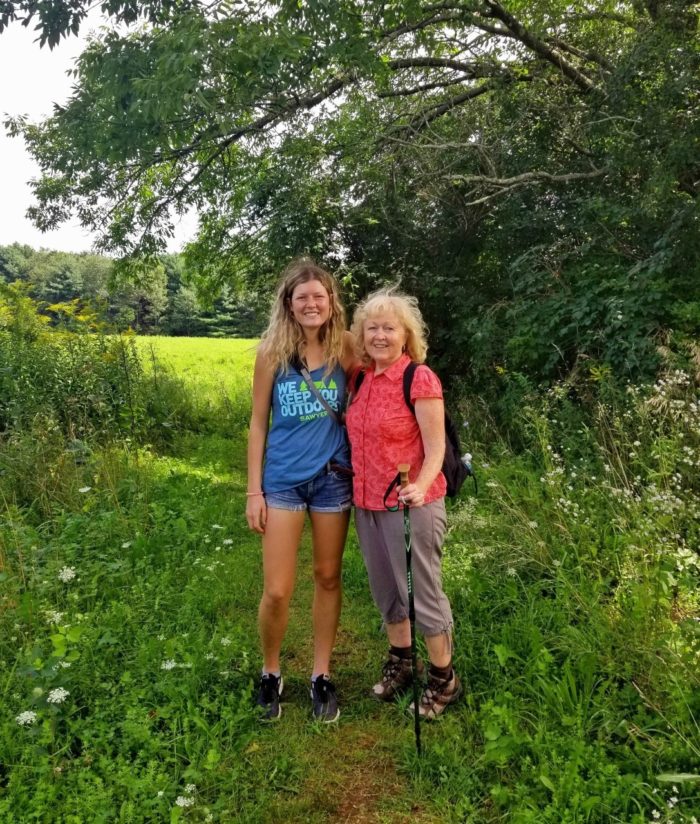 My mom visited for three nights, which meant three nights in a hotel bed for me. Oh, happy days! My first night’s sleep was awful and I thought I’d become Tom Hanks in Castaway, who chose to sleep on the floor instead of his hotel bed once he was rescued. I didn’t actually, but I felt like I was on his level. After walking only four miles the next day I must have recovered from Forest Girl back into a princess because I slept like a baby the last two nights in the hotel. I didn’t eat like a princess, that’s for sure. I ate like a blue whale (those things eat a lot, in case you didn’t know), eating everything my mom thought my heart desired: pasta, steak, pizza, and many ice creams from the SoCo Creamery. She also brought me Salt&Vinegar Lay’s chips from Canada because the American ones just aren’t the same. 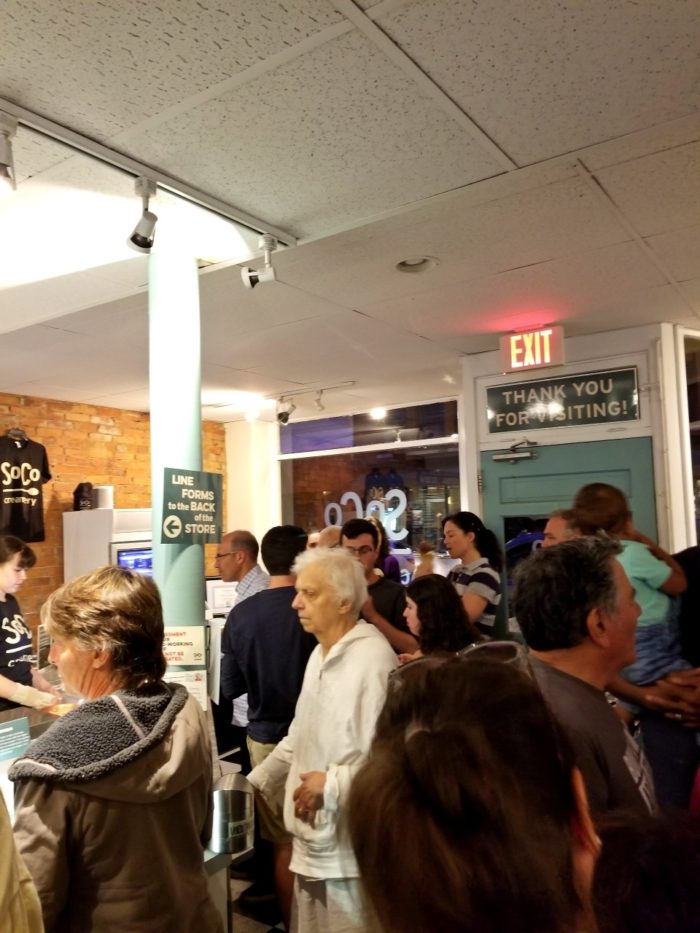 So many people at SoCo had me craving life on the trail.

Apparently I felt guilty from consuming so many calories at once, because I was dropped off at the trail the next morning and did 24 miles in eight hours. I did this thing called slackpacking, which means hiking with only your daily essentials while someone else transports your usual pack to a predetermined spot so many miles down the trail. Without my pack I was flying, carried away running like some crazy person for sections at a time. I crossed into Connecticut that day… crossed as some loco runner and I can assure you that won’t happen again on account of how sore my knees were. Anyway, goodbye to Massachusetts and the cushy hiking life it entailed. Hello Connecticut, one state closer to Georgia. 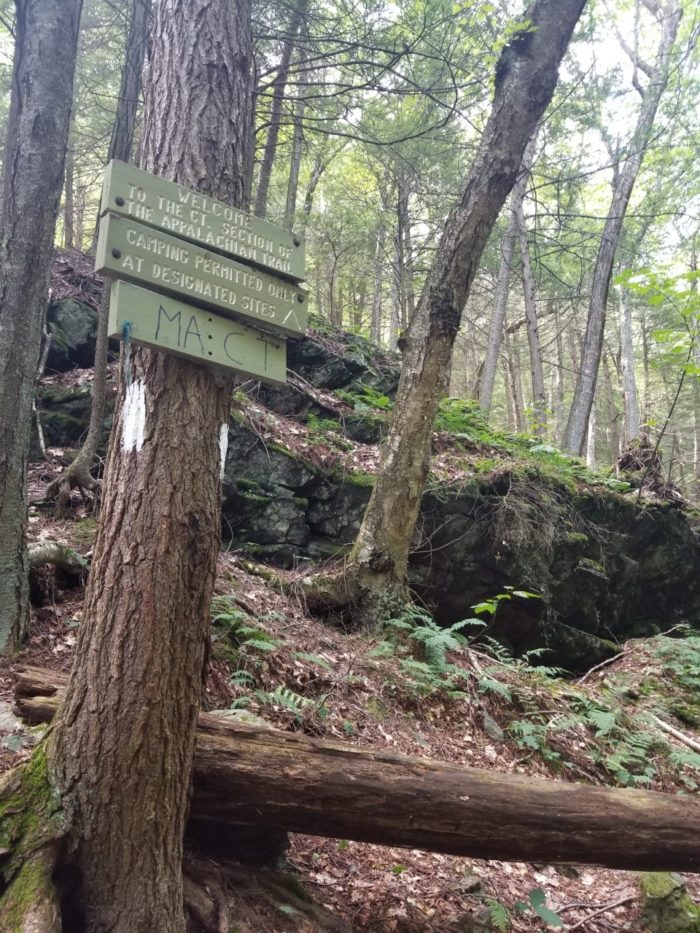 Just before I peace out here I’d like to address why I call people these strange names. I want to be clear that they are not my own pet names, but they are in fact trail names. It’s a legitimate thing where people on trail earn their names as they go. My name is Spirit, just like Dreamer, Sun Chaser, Rabbit, etc., are not their real names but indeed trail names. Dirty Dan happens to be named Dan, but out here he’s dirty, so that one is pretty straight forward, although each name usually has a story that accompanies how it became. I just wanted to clarify in case anyone was wondering if these were real people or imaginary friends.