Wild Pigs and a New State

The storm wasn’t bad. We got 2-3 hours rain and it stopped before any of us got up. My rain fly was wet, but I stayed dry inside. The only downside was that mud had splashed onto my tent and ground cloth. It was a mess that turned my hands grimy. I tried in vain to clean them off before giving up, carefully placing the wet and muddy tent components into exterior areas of my pack.

The landscape was foggy and mysterious. I walked along in high spirits, eager to be back on the trail. As I made my way up Cowrock Mountain, a noise in the woods made me look to my left and I spotted three pigs, two black and one white with black spots. I was surprised to see them there. (Looking it up later I read that feral swine are considered an invasive species in Georgia.) Shortly afterwards I spotted a snail leaving a slime trail as it proceeded down the trail. So cool!The fog lasted most of the morning and at one point became a light drizzle so I put on my rain jacket and pack cover. 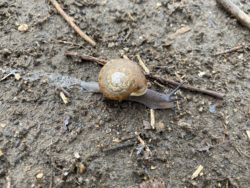 Slightly after mid-day I rounded the ridge I was on and the weather changed dramatically to sunny and warm. I stopped at Low Gap Shelter to eat lunch. There were several other people there and I met two nice ladies named Amber and Sam. My break lasted a couple hours due to chatting, drying my tent in the sun, and filtering water from a gurgling creek lined with bright yellow flowers.

The afternoon was bright sunshine and the first few miles were an easy walk along an old road bed. At one point I walked through a tunnel of rhododendrons. Eventually the trail got rocky and turned upwards to Blue Mountain. I decided to camp at the shelter. A guy named Buttercup showed me how to use the bear cables. Then I ate dinner while chatting with the main group of campers.

The night was chilly due to elevation and wind. I finally got to try my down hood and it worked perfectly with my sleeping bag, kept me toasty.

I was slow taking down my tent and packing up, but there didn’t seem any hurry. I soaked in the sun as I walked and soon came across a couple I hadn’t seen since Woody Gap. During the descent into Unicoi Gap I chatted with Adam about tornados and other recent crazy weather. At the gap, we came across trail magic, lemonade and a trash can. I partook of both, particularly excited to drop a little weight in trash. It reminded me of the Colorado trail where my then boyfriend and I walked an extra mile to drop some trash, but were disappointed to find a pack-it-out car camping site.

There was trail magic at the next gap too! This time lots of snacks and once again trash. I selected a couple items and thanked the generous lady. The AT is such a welcoming community! A mile ahead was an old cheese factory site and I stopped there for lunch. I met an AT Ridgerunner named Lily and spent my entire break chatting with her about trails and her job. It’s awesome, she covers the section of trail between Unicoi Gap and the state line, picking up trash and educating hikers. Sounds like a fun job!

When I reached the next shelter on Tray Mountain, I debated going further as it was only an eight mile day. My anxious side said do the descent before the way down gets wet with tonight’s rain. As for staying, my stomach was still somewhat upset and my body said it wanted a chill day. The deciding factor was camping again with a great group of people as most of our group from the last shelter came here. I was immediately happy with my decision and choosing a fun day over miles.

It was raining when I woke this morning. My tent stayed dry inside except for under the upper portion of my Thermarest, which I dried with my microfiber towel. I cooked oats in my vestibule next to a puddle of water. Then I packed up all my gear and put on my rain layers. The rain stopped just as I got out of the tent. I used a pack cover to defend my pack from foliage drips as I disassembled the tent. My rain strategy seems solid, though I have yet to see how I do walking in the rain.

I stopped at the next shelter to eat lunch as I dried tent components. It was a little eery as I had the place entirely to myself. Or perhaps because I was reading a book called Carnacki, The Ghost Finder as I elevated my legs. The longer break left me refreshed.

Less than two hours later I made it to Dicks Creek Gap. I was walking west toward Around the Bend hostel when I heard someone call “Emily”. A car slowed down and a couple offered me a ride to the hostel. (I met the guy a couple days earlier at a shelter; he was taking a zero due to an injured hand.) I happily accepted the ride. At the hostel I picked up my first resupply box. Yay, lots of yummy food! I spent time catching up on emails and used a real restroom, then caught a ride back to the trail. 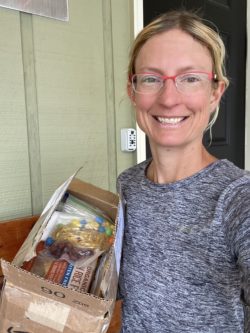 I hiked up to a knob campsite with Peter, who I met at the hostel and prior to that on Blood Mountain. Oof, my load of new food was heavy! We set up our tents and I checked out the nearby water source, a lovely spring bubbling out from under a tree. I was super excited to spot a small salamander!! Yay! I love lizards and wasn’t expecting to see one until the Smokies. It was the length of my ring finger. The day drew to a close with a colorful sunset.

I was awakened at 5 am by what sounded suspiciously like rain, though none was forecast. Luckily it didn’t last long. When I climbed out of my tent I saw fog in the valley below, but the sun shone brightly onto the knob and dried my tent while I made breakfast and went about camp chores.

My pack felt heavy so I started listening to an audiobook, The Lightning Thief by Rick Riordan. Eight miles into my day I made it to the North Carolina state line. Woohoo! I finished my first state! Plus, it’s my first time being in North Carolina. 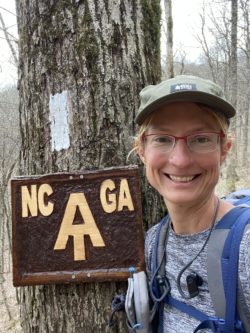 Directly after the boundary tree was a spring and I stopped to refill water and have lunch. There was a small group of thru hikers finishing their lunch so we chatted for a bit. All of us are planning to stop at Muskrat Creek Shelter.

It was early when I got to the shelter, not even 4 pm, but the forecast called for afternoon rain. Sure enough, it started sprinkling as I set up my tent near Peter and Wendy. Not wanting to spend the rest of the day inside it, I went over to the shelter to cook dinner and hang out with the other hikers.