Appalachian Trials is Now The Trek

You just landed at theTrek.co, but your intended destination was AppalachianTrials.com. What in the Joseph Gordon-Levitt is going on?

This is not a mistake. Welcome to your new home for All Things Long Distance Backpacking.

I can sense your panic.  “What? Why? This is different. Different is wrong. Where am I? Who are you? What’s that smell?”

Although the website looks different, its heart remains unchanged. Our mission to serve you the best backpacking information, stories, and entertainment is the same.  The Bloggers are the same. The Writers; the same. The people who run this site; the same.

What’s different is the aesthetic and function, improvements that have been more than six months in the making.

To fully understand why this change was needed, a history lesson is necessary.

AppalachianTrials.com was first introduced in 2012 solely to inform people about the book.  During that first year, I wrote a few AT-focused posts. The blog was quite literally the most basic WordPress template available (Twenty Eleven, for the nerds).  To my surprise, positive feedback poured in, as did people’s questions, which lead to more posts, more questions, and so on.  Before I knew it, other AT thru-hikers were volunteering their wisdom and passion for the AT to this eyesore of a blog.  Very quickly the site’s heart had outgrown its body.

In 2013, with the help of a friend (hi, Tim!), we launched the new AppalachianTrials.com, the version you’ve come to know over the last few years.  This new site featured two very big changes: 1) the book took a backseat to our new goal- to be the information and entertainment hub for AT enthusiasts- and 2) it was significantly less ugly.

Our bet was quite basic, that it’s impossible to separate a message from its medium. By offering an improved platform for thru-hikers to share their journeys and for experienced backpackers to share their wisdom, we felt there was the potential to build something special for the backpacking community.

Before we knew it, the growth of the Appalachian Trials team had exploded.  We went from five active bloggers in 2013 to 118 last year.  It seems our hypothesis proved correct.

But even with a platform that drastically improved upon its predecessor, problems persisted. The site was built off a cheap template (essentially the Ikea furniture of websites) modified to incorporate design elements from the book, since this is where our core audience stemmed from. The mobile site was lackluster. The user experience overall left a lot to be desired. There was a laundry list of issues that needed addressing.

Which brings us today.

Instead of making a series of renovations, we decided to tear the house down and start from scratch.  Not only a rebuild, but a rebrand.

As previously stated, the rebuild was necessary.  The site needed both performance and design improvements.  Our primary goal with the rebuild was to offer the best platform possible for thru-hikers to share their journey.

The rebrand was a much more difficult decision.  Here’s how we arrived to it.

AppalachianTrials.com began as a website dedicated to the Appalachian Trail and its people.  In the four years of this site’s existence, it had matured well beyond the AT.

As many thru-hikers can attest, backpacking is an addiction, and the AT is the gateway drug.  Once hooked, hiker trash turn their eyes west, either to the PCT or CDT if they’re able to carve out another 4-6 months.  Those who can only escape “the real world” for a few weeks turn to the John Muir Trail, Colorado Trail, Long Trail, Arizona Trail, Florida Trail, or any of the dozens of shorter long-trails around the country.  Once the popular long trails lose their challenge, some turn to less established routes, such as the Sierra High Route, Hayduke Trail, or Oregon Desert Trail.  Others turn to trails abroad, like the West Highland Way, Camino de Santiago, GR 20, Annapurna Circuit, or Te Araroa.

Despite its geographically limiting name, the site followed a similar evolution, which should come as no surprise since it’s a vehicle driven by these same thru-hikers.

Put simply, the site’s name became a misnomer. If you venture to the TheFoodNetwork.com, you’re justified in being confused, if not disappointed, landing on an article about hockey.

Additionally, because Appalachian Trials’ name so closely resembled the trail that inspired its origin, many people would not take our non-AT content as seriously.  Once again, the site’s heart had outgrown its body.

The book’s premise vs. the site’s

There are plenty of books on the subject of thru-hiking that focus on the joyous aspects of the undertaking.  Appalachian Trials is not one of them. The book’s goal was to provide realistic expectations of what a half year in the woods looks like and offer a gameplan and toolset for When Shit Hits the Fan (literally the title of Chapter 6).

Although the Trials of a thru-hike are a major, important aspect of the journey, it’s only one side of the coin.  Thru-hiking is a half-year without responsibilities, walking through some of the most beautiful landscapes imaginable, with some of the most interesting, loving people you’ll ever encounter.  Writing about these experiences under a title that implies struggle was a mismatch.

A Trek is a blank canvas loaded with uncertainty and potential- the potential for euphoria, misery, and everything in between.

The least of reasons for the change, although admittedly still a reason, was the confusion caused by the play on words.  If I had a nickel for every time someone thought there was a typo in our name, I’d buy you all a cuben fiber castle. 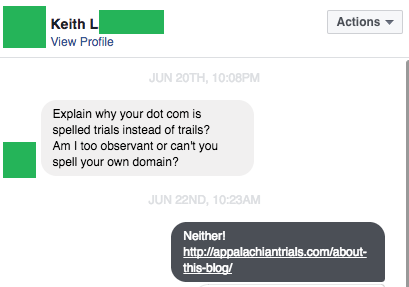 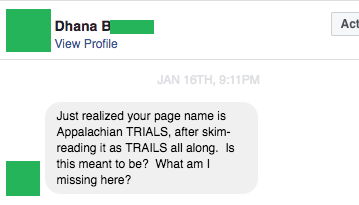 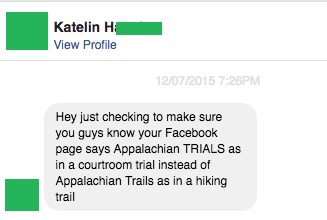 This is just the tip of the iceberg.

AppalachianTrials.com began as a landing page for a book. Today, the site’s popularity exceeds the book’s. Without knowing the site’s origins, the confusion makes perfect sense. It shouldn’t be required that people know our history to enjoy a post celebrating Hike Naked Day.

When you have to correct people over and over again, there becomes a point where you’re the one who’s wrong.

All of this being said, I guarantee you there’s no one more sad to see AppalachianTrials.com go than I.  For the last four years, I’ve spent the majority of my waking hours on the site or working to improve it.  It represents my life changing journey, the book that was spawned from it, and my career.  This change didn’t happen because I wanted it to, it happened because it needed to.

But I assure you, the sadness is far outweighed by my excitement for what’s to come. Our goal is to make the the Trek your go-to home for All Things Long Distance Backpacking.  We hope you’ll Trek along with us.

How to Use This Site

Should a manual for a website really be necessary?  No, it should not.  That said, there are a few key changes to this site that we think you’ll like and should be aware of.

We are cognizant that many readers only want AT-related content. With this new site, it will be easier than ever to get trail-specific advice, entertainment, news, and trail updates through our social media channels.

If you want JUST the Appalachian Trail

We’ve segmented all of our Appalachian Trail content to this nifty page, with a color scheme and logo that may look familiar (found by clicking the yellow underlined AT at the top of the site).

If you want JUST the Pacific Crest Trail

Similarly, all of our PCT content now lives on this page (found by clicking the blue underlined PCT at the top of the site).

If you want the best of All Things Long Distance Backpacking

What’s that?  You’re an aspiring thru-hiker who wants to join our awesome community with a now equally awesome website?  Cool.  Apply to become a Trek Blogger here.

If you’re an experienced backpacker who wants to showcase your backpacking knowledge on this brand new Ferrari of an Internet destination.  Apply to become a Trek Writer here.

Thank you.  Thank you to those who read this site daily and comment religiously.  Thank you to those who’ve only read one post. Thank you to everyone who’s commented, messaged, or emailed us with feedback, positive or negative. We’re listening, and your input has played a major role in shaping this new project.  Please never stop airing your grievances.  It’s our fuel for improvement.