Upon entering Wyoming, the CDT transitions quite rapidly from forested mountains to the flat and treeless basin of Wyoming’s Red Desert. We emerged from the trees and descended to sagebrush plains. This place makes New Mexico look lush by comparison. 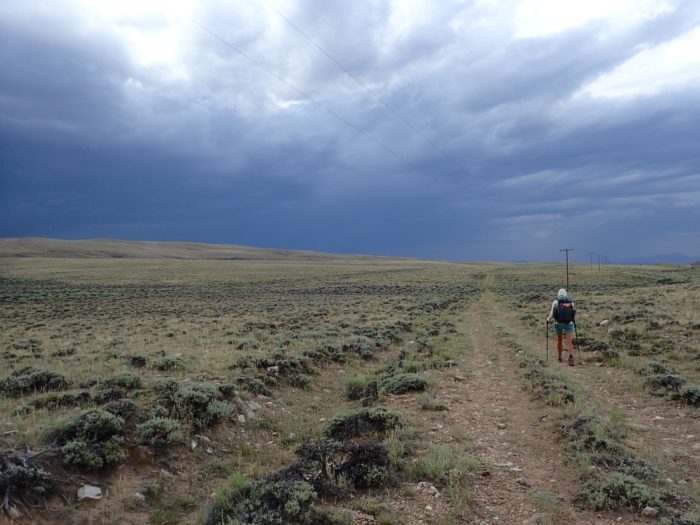 This part of the trail crosses through an endorheic basin, known as Wyoming’s Great Divide Basin. In this area, the Continental Divide actually splits apart, roughly forming a rectangle. All the water that falls within the rectangle does not drain to any ocean. The surface water here is saline/alkaline and mostly undrinkable. Trees are scarce to nonexistent. The terrain, however, is flat and easy, especially after the high altitude ups and downs of Colorado. 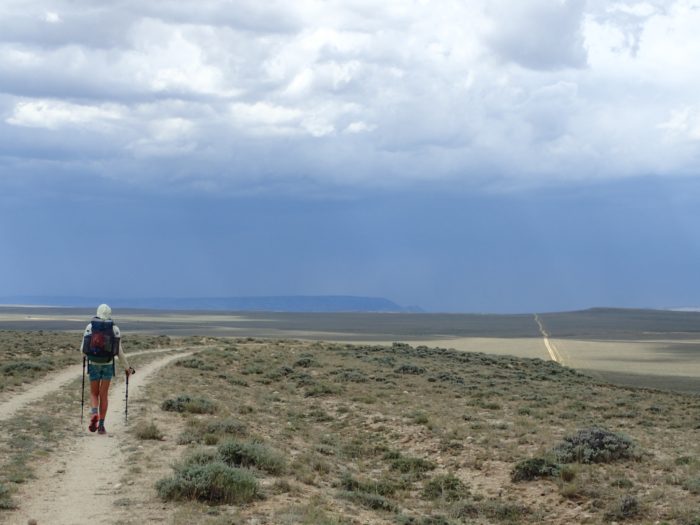 We’ve been hiking with Jupiter since the border, but he got off trail for a week in Northern Colorado to spend time with his girlfriend, so it was just Piñata and me through this stretch. We decided to take advantage of the easier terrain and really push out some miles. We had been averaging in the high 20s through most of Colorado, but through the basin we hiked 30-40 miles each day, trying to get back to the mountains as soon as possible. 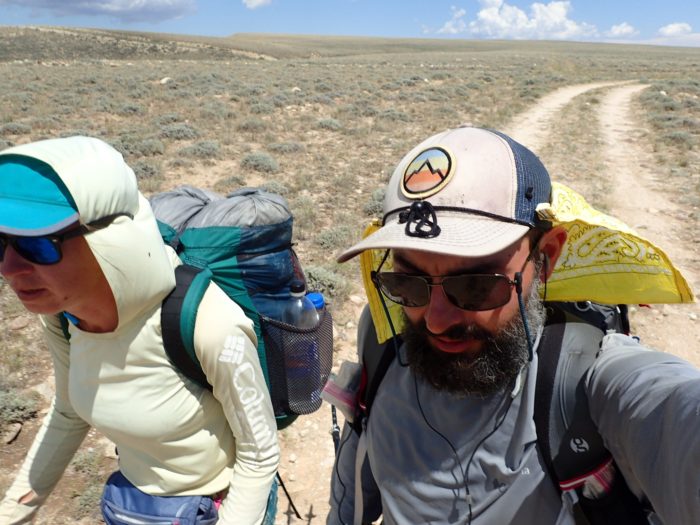 Headed into Rawlins, we opted to avoid a 35-mile water carry and take the Ley road walk alternate into town. It was a 35-mile road walk, partly gravel, partly paved, with a single drinkable water source just about halfway through. It was straight, flat, and a little boring as the view never really changed. Typically, there are construction crews out offering water to hikers, but it was a Sunday and no one was out working, so we missed out on that trail magic. Still, we met a few new people and we made good time, and even found a tree or two to take a shade break under. 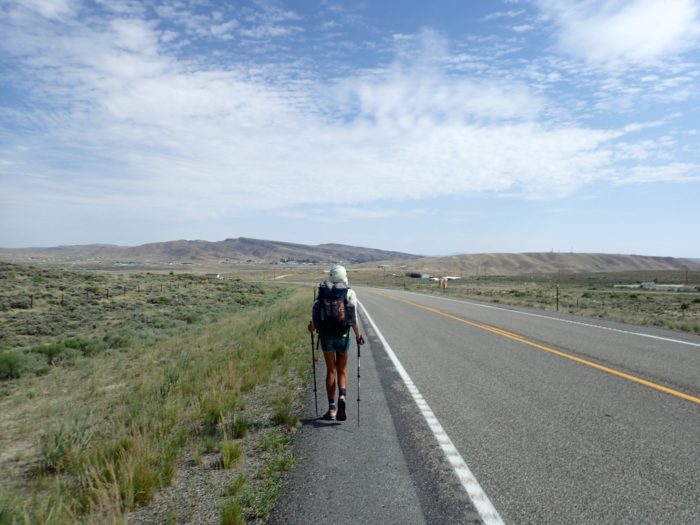 In Rawlins, we decided to take a zero day. This allowed us time to mail a few packages ahead through Wyoming. We saw a few familiar faces in town and met a few new people as well. We even went out for beers our second night in town. It was fun, but we stayed up later than we planned so we were slow to leave town the next day.

As we left Rawlins, it was hot, dry, and flat. People said there was no shade in New Mexico, but they lied. At least every few miles there was a tree, shrub, or yucca large enough to take a shade break under. In the basin, there really is no shade. Twelve miles out of town we stopped for water and took a break under a patch of trees. We didn’t know it at the time, but it was the last tree or shade of any kind for 45 miles. That evening, as thunderstorms went off all around us, and the wind whipped across the plains, we realized we had no shelter whatsoever beyond our tent. Fortunately, the worst of the storms never quite reached us, and the wind died down after a few hours. 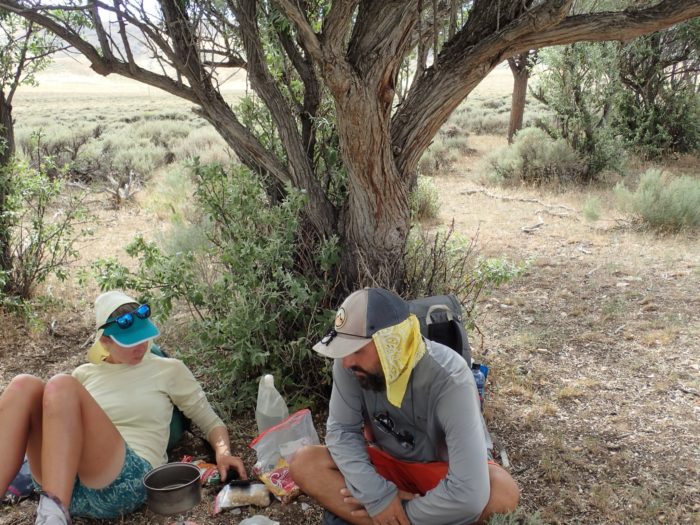 The next day was a mudslide, as the dirt turned to clay after a night of rain. It caked up on our shoes and made our feet heavy. Eventually the earth dried out and the sun was beating down on us again. Hot as it was, it was never as scorching as the desert sun can be. Each day the clouds built up and by afternoon would provide us with some relief as they blocked the sun and dropped a little rain.

The trail through the basin was actually mostly roads, but they were really just jeep tracks in the middle of nowhere — more like two parallel trails than actual roads. They stretched on for miles in front of us, disappearing over a horizon that always seemed to be getting farther away. We saw many wild mustangs and herds of pronghorn, not to mention the cows. Finally, mountains came into view. The Wind River Range, perhaps one of the most anticipated sections of the trail, loomed on the horizon. Gradually they grew bigger, gradually they grew closer. 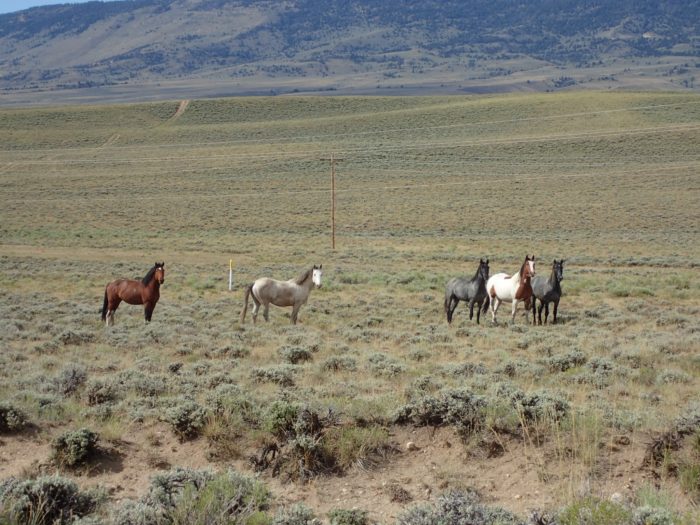 Before we knew it we were at South Pass City, an old gold mining town turned historic site. Rather than hitch into Lander, we sent ourselves a box here. It turned out to be not quite enough food, so we also raided the hiker box a little to make up for it. We thought the general store here would have supplies but all they had was a little candy. As we were organizing our resupply, one of the employees invited us to her cabin for a few beers. Turns out she’s from Arizona, and a huge fan of the Arizona Trail. We had good conversation and good times, and set up camp in the parking lot just outside the historic site. Next we go into the Wind River Range.