Wowed by Wyoming: From the Winds to Yellowstone

The contrasts between one section of this trail and the next are amazing. With transitions that last only a moment, we move from desert, to mountains, back to desert, back to even more spectacular mountains. 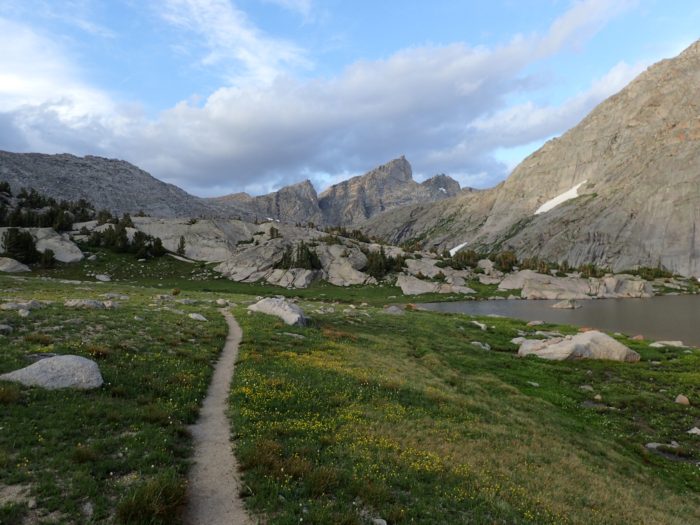 Wyoming’s Wind River Range is often called the Sierra of the CDT. The mountains are remote, high altitude, and spectacular. This is one of those sections that is hyped up as one of the highlights of the trail, and without a doubt it met and surpassed all my expectations. This was easily my favorite section of trail so far, and might be my new favorite place of all.

The Cirque of the Towers

One of two popular alternate routes through the Winds, the Cirque of the Towers is a roughly 21-mile route through some absolutely spectacular scenery. If you only do one alternate on the CDT, this is the one to do. In geology, a cirque is an amphitheater-like basin, formed by glacial erosion and surrounded by cliff-like peaks. 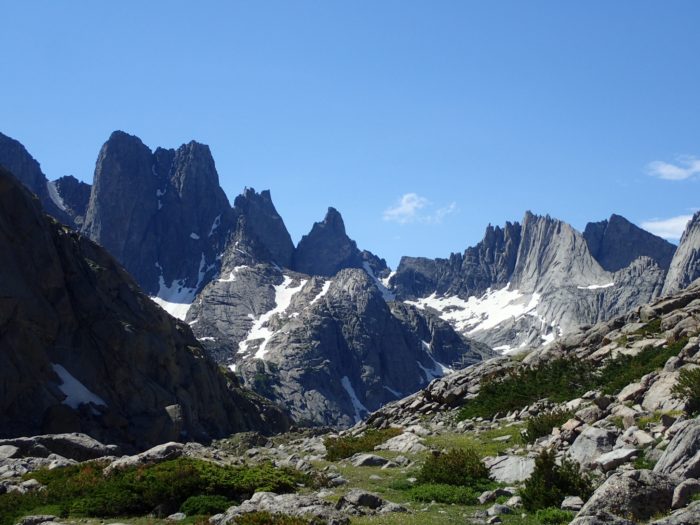 We left South Pass City and started into the mountains. Our first day out of town was unremarkable. It was nice to be back in the trees but the scenery was pretty generic. On the morning of day two our friend Enigma passed by as we were breaking camp. A few miles later, we saw him again, taking a break near the junction for the alternate. We knew the route could be difficult to follow at times, and Enigma decided to wait for us since we have GPS and he doesn’t. A mile or two later we were joined by another thru-hiker named Z, and the four of us ended up hiking together for the entire alternate and the remainder of the Winds. This proved to be great for morale, because we lost the trail quite a few times, or there was just no trail to follow, and the terrain was difficult and slow going. It would have been a frustrating experience alone, but together we were able to keep things enjoyable. 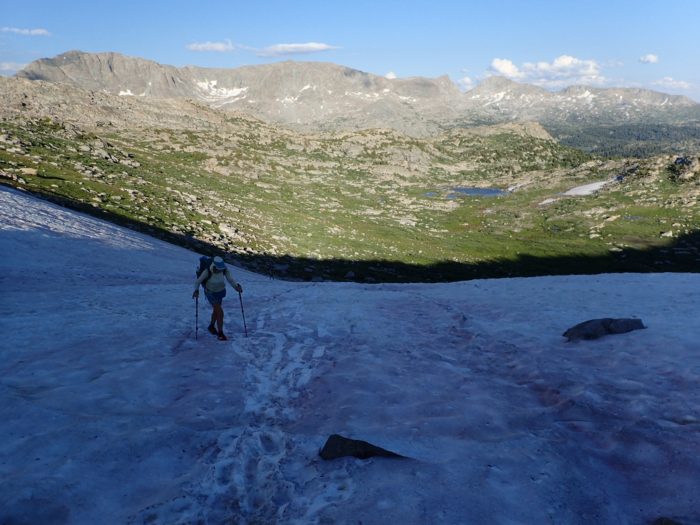 We climbed up and over Temple Pass, and were immediately greeted with epic 360-degree views of towering granite peaks over glacial valleys dotted with pristine lakes. We descended through the rocks and snow to Temple Lake, where we stopped for a break and Z took an extremely short swim before heading on. We followed the route over slickrock, around countless alpine lakes. At each high point the views opened up to reveal yet more towering peaks. Progress was slow, in part because of the terrain, and in part because of our stopping to take pictures and “ooh” and “ahh” at the awesome scenery. 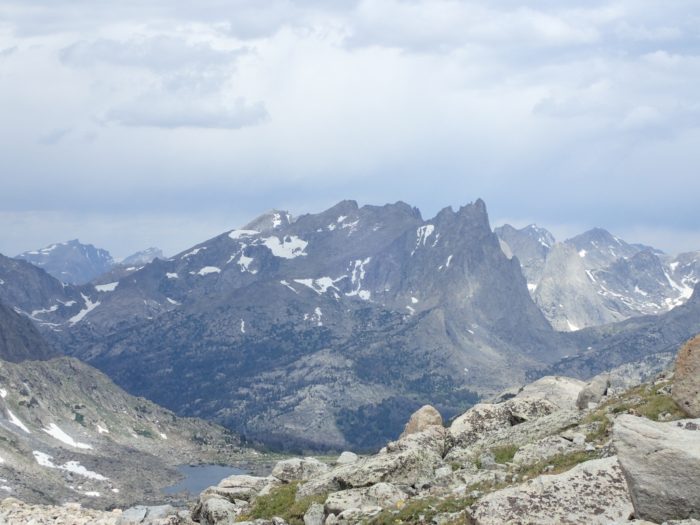 Back to the CDT

The final pass of the alternate was Texas Pass, at over 12,000 feet. With no evident trail, we made our way straight up the mountainside, scrambling over rocks until we reached the large patch of snow on the final approach. We had a long climb up a snow chute to reach the top of the pass, but in the afternoon heat the snow was slushy and pretty easy to climb, even without snow gear. From the top, we enjoyed one last high-altitude view before heading down the steep rocky trail on the opposite side of the pass. We were determined to make it back to the official CDT by the end of the day, and we had to hike until nightfall just to get back to the junction. It was a hard, 25-mile day, but easily one of the best days on trail. 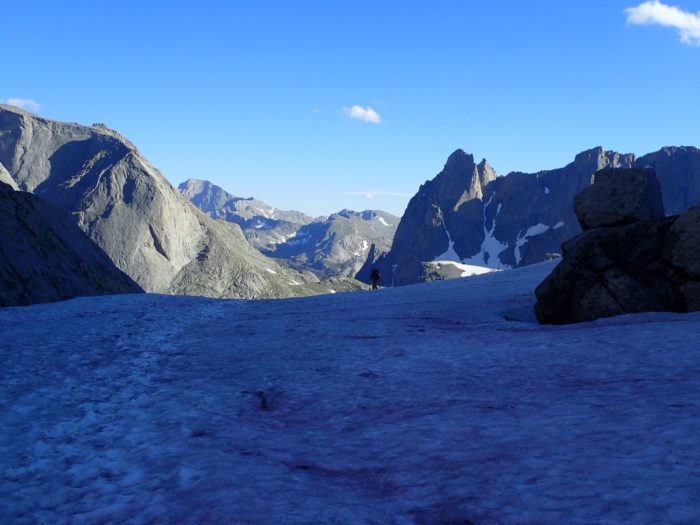 We decided to try to skip resupplying in Pinedale and do the entire 170-mile stretch through the Winds in one go. While it was doable, we all found our hiker hunger really started to kick in, and we had to seriously ration our food to make it all the way to Dubois. Once back on the CDT, the terrain was a little easier, with no route finding, so we were able to put in 30-mile days for the remainder of the stretch. We would have liked to do the Knapsack Col alternate as well, but given the snow levels (and our food supply) we decided against the alternate without any snow gear. It’s definitely on our list of places to return to. 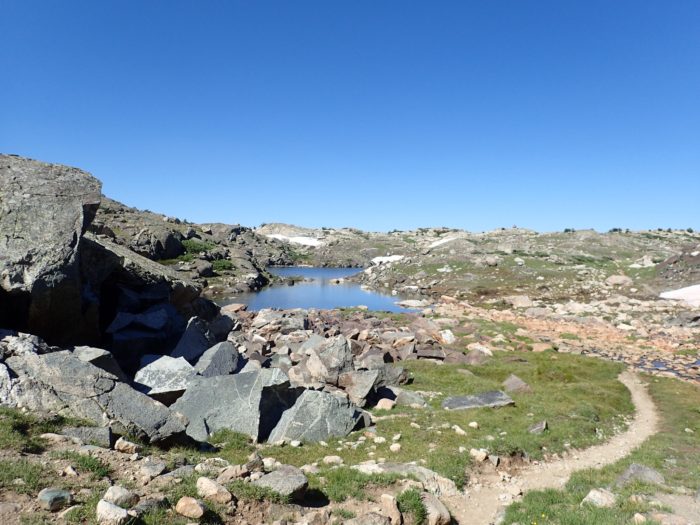 Every day from the cirque to Dubois we had wet feet. Creek crossings were not only a daily occurrence, but a frequent recurrence, as we had multiple fords to contend with every day. Although some were strong and tricky, none were the life-threatening type of crossings we dealt with in the High Sierra last year, so aside from the wet feet it was a fun challenge. 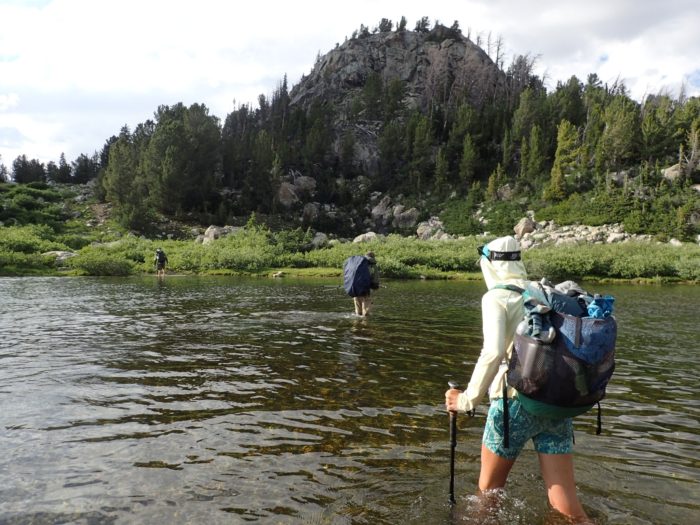 As we began to descend out of the Winds, we followed the Green River, a beautiful river that ultimately joins the Colorado River in Canyonlands, UT. We began to see boaters, hikers, and families out fishing. All day long we turned around to enjoy the views of the Wind River Range towering up beyond the banks of the river. We’ve barely scratched the surface of this place. We want to come back here. 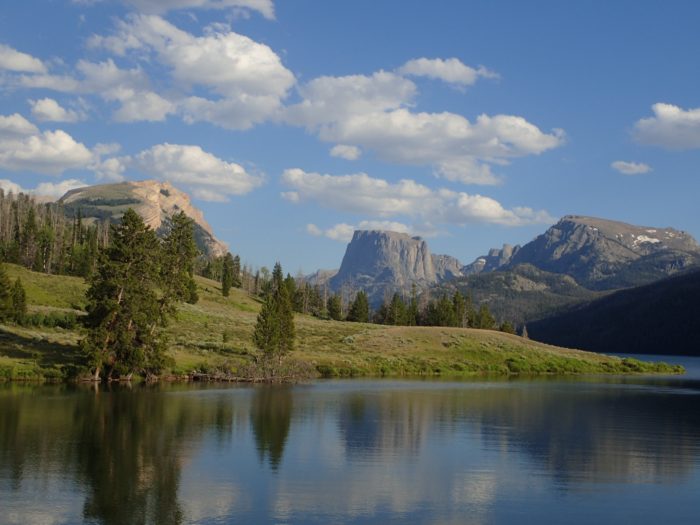 The final stretch into Dubois was frustrating, probably mostly due to lackluster scenery compared to the Winds, excessive biting flies, huge herds of cows, and generally shitty trail conditions-rutted, muddy, and no views. Still, we had a nice time in Dubois, cramming five people into our motel room and enjoying the nightly s’mores provided by the motel staff. 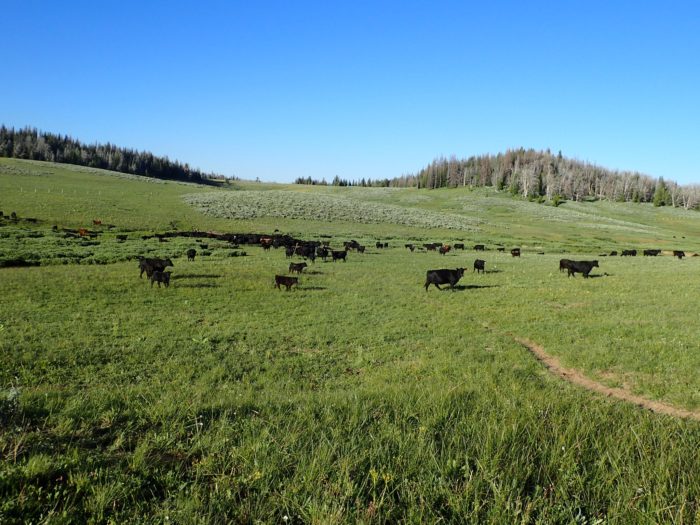 Leaving Dubois, we returned to the mountains, flirting with the Tetons until we entered Yellowstone. Once in the park, we had to stick to our designated permitted campsites, so we enjoyed a few lower-mileage days to enjoy the park. As usual for a national park, the backcountry was empty and the frontcountry was practically Disneyland. 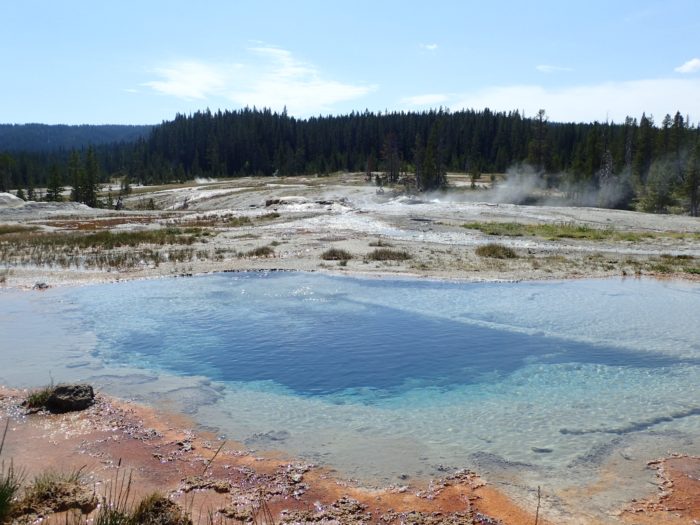 We walked past steaming streams, gurgling geysers, and thermal vents. On our second night in the park we camped near Lone Star Geyser, which erupts for nearly 40 continuous minutes every three hours. We enjoyed two major eruptions practically to ourselves-sure beats the massive crowds at Old Faithful. 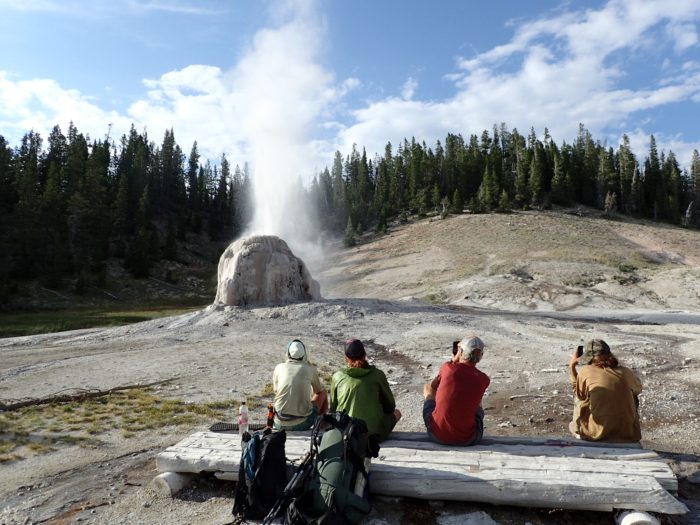 Lone Star was only about three miles from Old Faithful Village, and we woke up on my birthday and made our way to the lodge for breakfast buffet. The staff showed us how to get free showers, we picked up our resupply box, and hit the store for some wine to pack out. We camped at Summit Lake, enjoying a campfire and wine for our last night in the park. It was a good birthday. 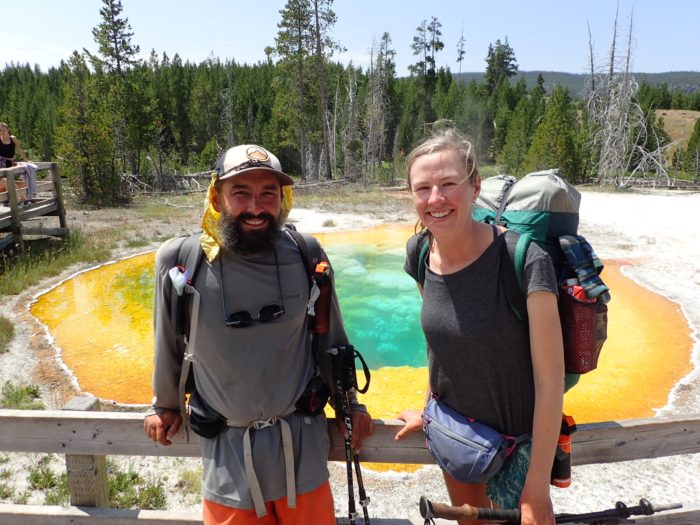 From Summit Lake it was a short way to make it to the Idaho border, then a few miles until we were out of the park. Surprisingly, Wyoming has proven to be my favorite state of the trail so far. All my expectations have been surpassed, and we’ve had an awesome time. Onward toward Montana. 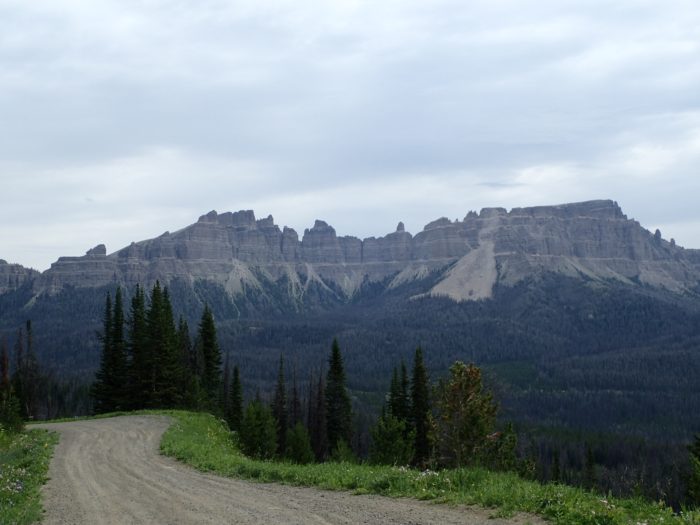