Through the Gila, Part One; Hot Springs!

Following a restful nero in Silver City, just ten miles in and an afternoon off, getting back on trail felt good.

Josh had new shoes and said he felt bouncy as we walked up the road on the Walnut Creek alternate. The paved residential street turned into a narrow road as it wound up into the hills. I spied a little javalina up ahead and got so excited that I had to stop myself from yelling as it ran off into the bushes. It was such a cute small brown fuzzy pig creature!

After crossing the official CDT and hopping onto the beginning of the Gila River alternate, Josh and I missed a turn and ended up walking an extra two miles, during which Josh broke his trekking pole. He taped it back together with some electrical tape. He’d hardly used the poles before starting the trail, so that was pretty annoying.

The dirt road went up, up, up, and I started to get a bad stomachache. We took a long break in a little spot of shade, and when I felt better we continued on, crossing a couple of larger streams and walking through pine forest. A couple was jeep camping by the side of the road and offered us something to drink.

We stood around drinking Coronas for a little while and the guy showed me some flecks of gold he got out of the stream with a sluice.

They both had done trail work along the CDT, and knew a lot about the area.

Unfortunately, the Corona plus my stomachache turned out to be a bad combo, and a couple of miles later I plopped down in an uncomfortable spot and refused to move for an hour. Josh patiently waited until I convinced myself to keep moving. The little-used canyon trail we’d been hiking emerged into a series of hilltop rock gardens. It was so beautiful, but my stomach kept cramping and I was mostly shuffling along looking at the ground. I didn’t take any pictures. There were sandstone boulders, cacti, and bonsai-like piñon and juniper. I did notice some nice rock work along the trail. 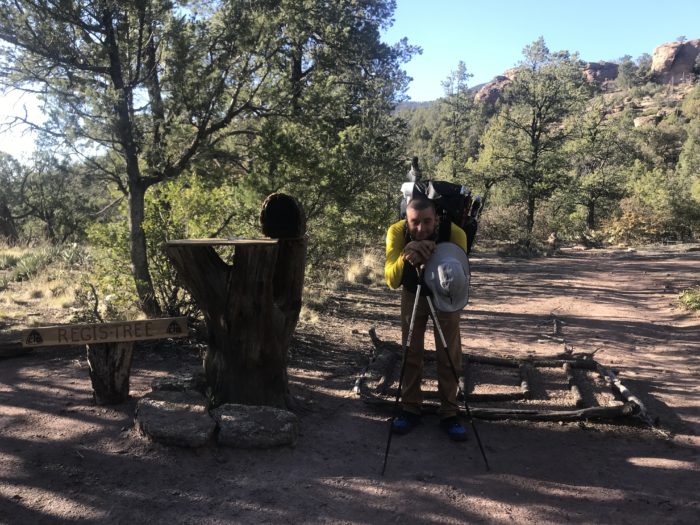 Josh and I came upon a stump with a bark-covered mailbox and a sign reading “Regis-tree.” After signing we began to walk on, hoping to camp soon, when someone in the trees shouted hello. This turned out to be Doug the hermit. He invited us on a tour of his cabin and garden, which was hard to turn down.

Who doesn’t want to know how a hermit lives?

His garden was particularly impressive, with several clever solutions to the dry mountain climate. He makes a two-week trip back into civilization once a year, stocking up on food and other items. For a hermit, he seems very connected: people from the trail community come to visit, a friend brought him a new ATV recently, and he has a flip phone, which gets service on the ridge a mile and a half away. He spends weeks every year working on trails in the area. He started his hermitage over 20 years ago, when he hiked out into the mountains with nothing but a backpack.

We camped about a third of a mile down the trail from Doug’s place, after running into Wing It and Stoke. They started the trail the same day as Josh and me, but we hadn’t seen them in a few days.

The next day there was a steep section first thing. I was glad that my stomach was feeling better, and the tiny wild strawberries flowering at my feet made me happy. Early in the afternoon, after winding along the Sheep Corral trail/road, and a steep descent into the canyon, we arrived at the Gila River!

Josh and I took a celebratory swim. 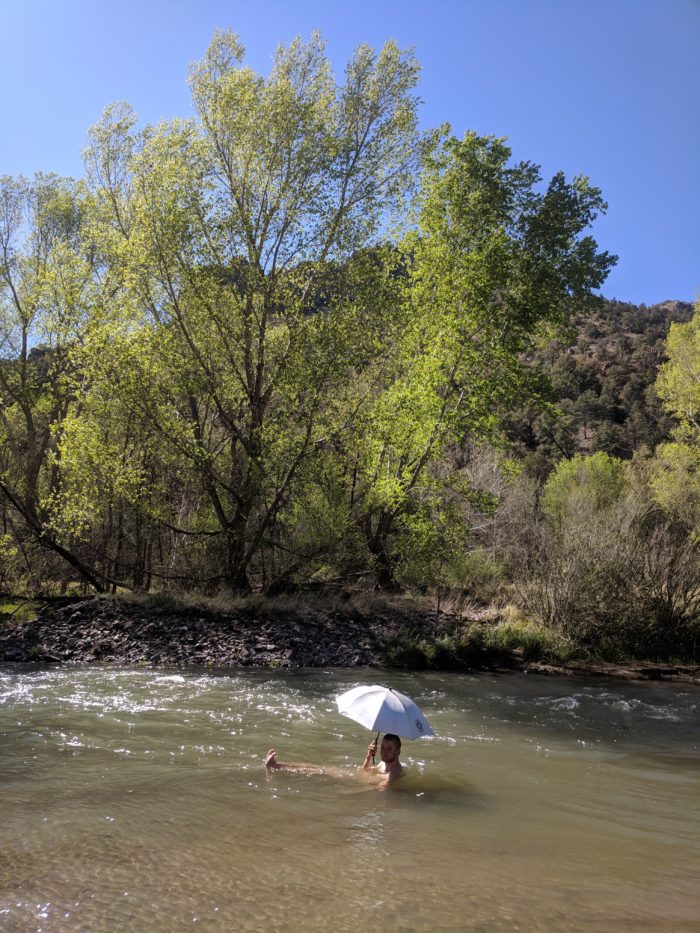 This is how to use a trekking umbrella.

Then we began hiking along the Gila. Ideally, this consisted of walking along a trail most of the time. The trail would drop us at the bank of the river, and we would see a cairn on the opposite side, showing where the trail would continue after crossing. This scenario happened occasionally.

More often we would miss the trail, the cairns, or have to cross somewhere farther down because the water was too deep or strong.

On most of the crossings the water came up to my upper thighs. Sometimes to my hips. I had to transfer everything in my hip belt pockets into the trash compactor bag lining my pack, including my phone, so I didn’t get a lot of pictures, and I wasn’t really keeping track of our pace.

There was a note on one of the Jonathan Ley maps for the section that suggested searching farther into the trees on the riverbank if you were having trouble finding the path. Unfortunately, I think this led to some stubborn bushwhacking and a refusal to cross on our parts, when Josh or I became convinced that we just hadn’t found the path yet. Then our riverbank would end in cliffs and we’d be forced to wade into the water once again. At one point deep, rushing water pushed us onto a sketchy climb on steep banks, loose rocks and dirt tumbling from under our feet. After that crossing we decided to find a campsite soon.

The spot we found was perfect: grassy and flat, with a fire ring, and a huge white-barked tree. 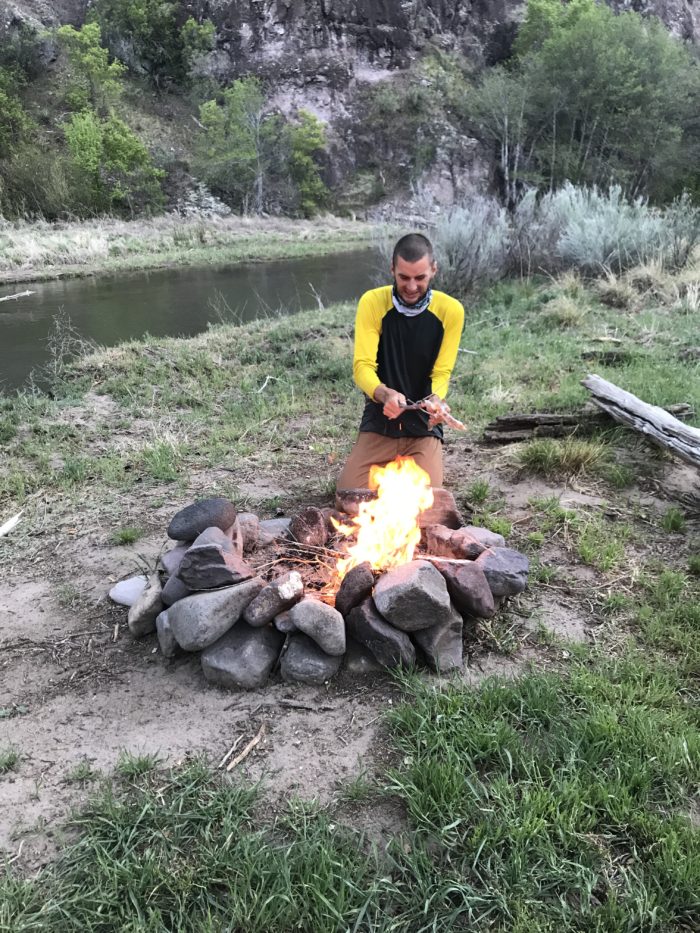 Josh made our first on-trail fire.

I pulled off and squeezed out my sopping wet shoes, socks, and gaiters, and warmed my freezing feet while I ate dinner. We stayed up a little later than usual, watching the fire and the stars overhead. There were a couple of caves in the cliffs opposite. I wondered how many people, over the thousands of years this area has been populated, had come through this spot and stayed to light a fire.

The next day we set out to cross the river another 30 times before getting to Doc Campbell’s Post. That river is so frigid first thing in the morning! A few miles up the river we saw smoke on the opposite side of the river. Thinking it was a camp fire someone hadn’t put out properly, Josh crossed the river to go pour some water on it. The place he crossed was really deep, so I figured he had it covered and sat down to eat a snack. When he came back, he told me it had been a tree trunk smoking, and that the whole ridge on the opposite bank was burned. 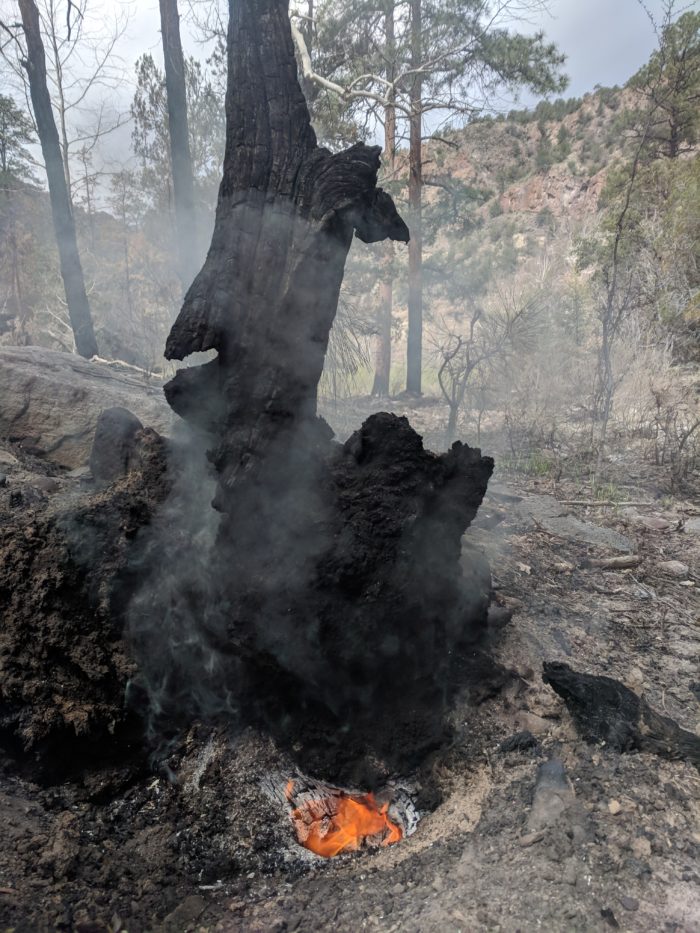 I’ve never seen such a recent burn. There were tufts of grass left mostly charred with green blades still emerging from the base. We did our best to put out the tree trunk, and I wondered why we hadn’t heard anything about the fire when we left Silver City, just two days before.

Josh and I stopped at some unnamed hot springs for lunch.

They were warm and perfect for my river-worn body, but I had to do my best to embrace the several inches of mud at the bottom of the pools.

When we were drying off we realized that Doc Campbell’s would be closing at five, and we had four miles to cover in the next hour and 15 minutes. 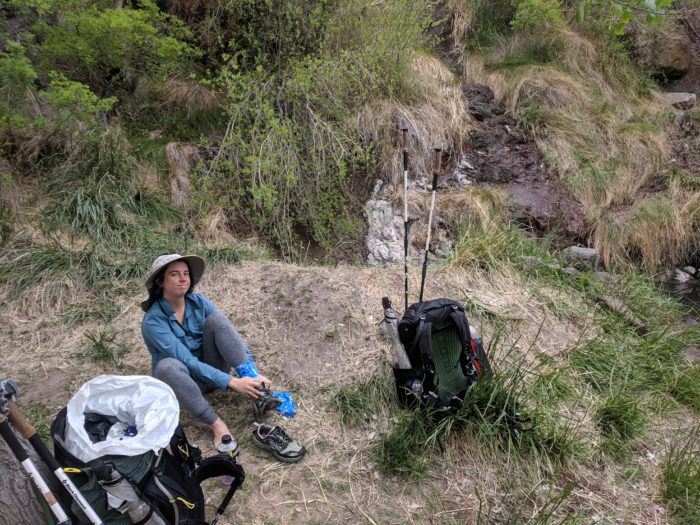 Feeling irritated, because how do you make four mph through the Gila?

With only snacks in our packs and in fear of a dinner-less night, we hustled and made it with 15 minutes to spare! There was a lot of swearing involved. Mostly on my part and directed unfairly toward Josh’s ears.

Once I was eating lemon-berry ice cream and barbecue chips, everything was better. The sky clouded over and rain poured while we took shelter under the tin porch roof of the now-closed Doc Campbell’s, watching hummingbirds flock to the feeder. Wing It and Stoke showed up and we at dinner together, waiting for a break in the rain to walk down to the Gila Hot Springs campground. Hot springs in the rain were so good. 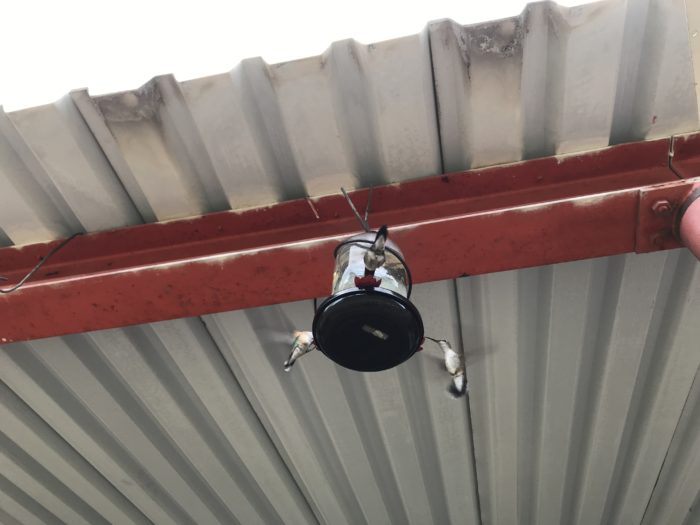 Three is a small number of hummingbirds for this feeder.