Lavafields and Thunderstorms: The Road into Grants

Left Davila Ranch in the morning. Had thirteen miles until Pie Town. Plugged into music halfway to push myself into town. Rolled into town tired and ready for pie. Dropped pack at the Toaster House and went to the restaurant where I found the other hikers. 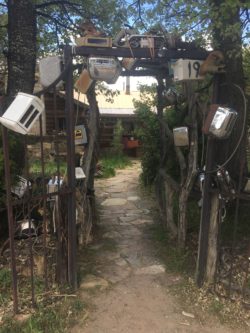 Fell in to hanging with hikers for the rest of the evening. Ate some good food and pie at the restaurant. We went back to the Toaster House and had an evening. A lot of different energies interacting which made for interesting conversations. Went to bed easily.

Had breakfast at the other restaurant in town. Picked up a package at the Post Office and packed everything up in order to leave that morning. Ended up being vortexed in a bit but managed to wrestle myself away a bit after noon.

Had sixteen miles until TLC Ranch, another spot where hikers could come camp and get water. All roads, so there was the challenge of boredom. There was also some rain that came through and chilled the area. The cold being a different challenge than the heat of last year. 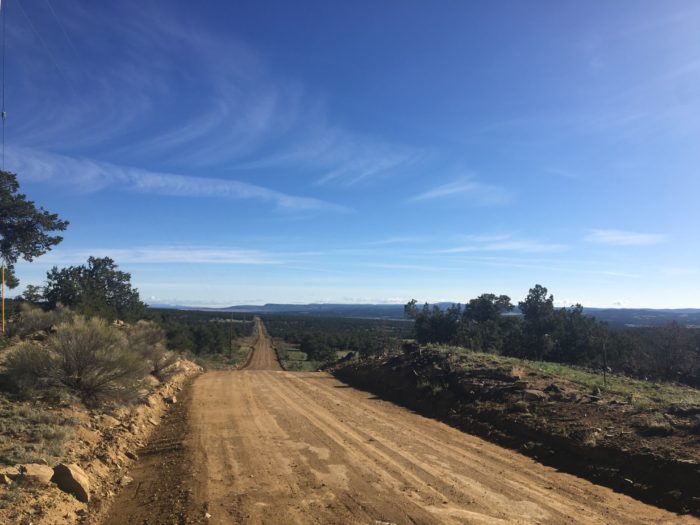 Stuck to it and got there in the evening. Set up camp and went inside to catch up with all the other hikers. Twig and Relentless were there along with a few other hikers. The hosts of the ranch cooked us a hot dog dinner which was fantastic. Helped clean and went to bed full and happy.

Woke up and helped cook some bacon and eggs. With some coffee and English muffins, my morning was off to a fantastic start. Still was on roads for the morning. Big open skies with massive clouds along miles of exposed road was driving me a bit crazy. So when I reached a crossroads to take an alternate back to single track trail I was paralyzed by indecision.

I took this alternate last year and ended up with a 30 mile asphalt road walk, which I ended up hitching. And I knew that I didn’t want to repeat the same path. But the alternate got me on single track trail and off of roads more quickly. It also cuts forty miles off and gets me into Grants a day sooner. And with the coming storm, I was looking to get to Grants. There was another alternate that I didn’t take last year that would bypass the asphalt road walk so I set the intention of taking this alternate. 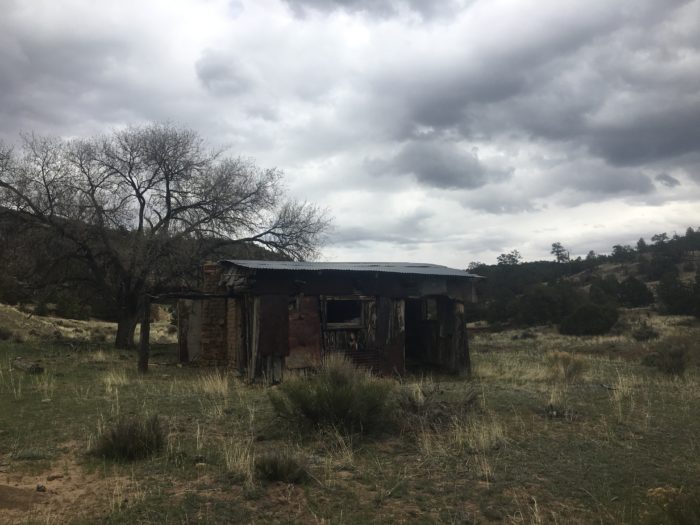 The alternate took me up into a canyon with trees! Walked past an old pioneer house that had been standing for some time. Then following a canyon until a windmill. Weather started to creep up upon me. Filled up and pushed a mile or two past before setting up.

Rain started in the night. It came down hard. It continued into the morning so I stayed in my tent for awhile. I figured that I was perfectly equipped, trained and experienced to tackle this day of rain and cold. Had eleven miles on the asphalt until I got back onto trail, with nine more miles to a water source. I had the intention of getting all the way there. But about nine miles of cold, wet, grey asphalt hiking, watching so many cars pass me to get to warm, dry places, convinced me to hitch into Grants. I decided to push to the end of the highway so I could come back tomorrow and continue on trail.

A nice Finnish man picked me up. He was sight seeing in the Southwest so we stopped a few times so he could take pictures. I checked a few out before waiting in the car as I was very cold. We get into Grants around mid-afternoon and I get a cheap motel room for myself. Got a warm pizza, aired out my soaking tent, and slept for the majority of the evening and night in dry warmth.

Woke up early and met up with Twig and Relentless. Twig was leaving trail to take care of her father, who had become very ill. It was hard to see her go, harder for her to leave. Saw some of the bubble that is ahead of me, as well as people I hung out with at Pie Town; Wraps, Caroline, and Link. Got a ride back to the trailhead and started hiking. Which was beautiful. It was called “The Badlands” and it was appropriately named. Seven and a half miles of lava fields, following cairns. The lava fields were breathtaking, the rocks were sharp and porous. It wasn’t slippery as the rocks had they’re own grip despite my worn shoes. 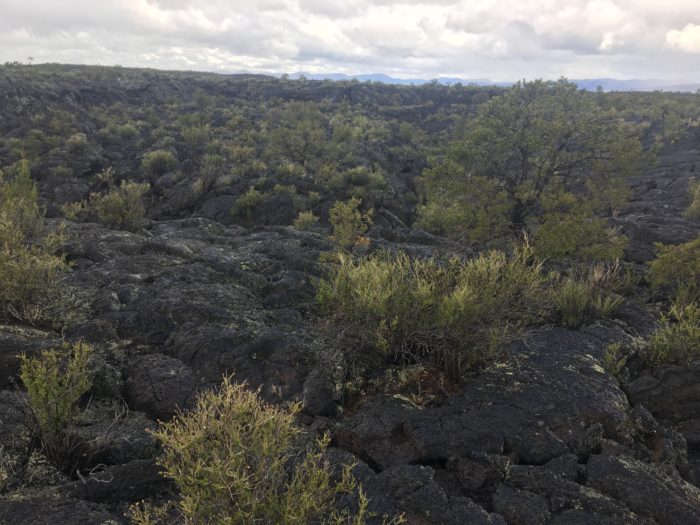 Rain came intermittently as I came out of the fields. I breaked at a trailhead on the other side when one of the massive thunderclouds around me produced an incredible lightning bolt a mile away. Sure as day, a second to a second and a half later, the world shook around me as thunder rocked the air. Took some shelter in the pit toilet, geared up and when the cloud had moved a bit passed I pushed on.

Intermittent rain continued as I ascended into a lush, pine forested valley. I had not seen New Mexico this green last year. Hiked to the opening of the Zuni Canyon before setting up camp. It was twelve miles along the canyon to get back to Grants, which I planned to do in the morning. Went to bed extremely grateful to be able to walk through and experience all of these places.

Woke up to a frozen rainfly. Packed up and pushed on through the canyon. It was along a gravel road, but the canyon was beautiful enough to make the morning quite lovely. Turning into asphalt closer to Grants, I walked along the road past a few dozen dogs, who all barked to let me know I was in their territory. Walking past, I got a ride from some trail angels; Carol and Hugo Mumm, back to hotel alley. Grants is a bit spread out, and there is a section with a few hotels, restaurants, and a Walmart. Everything a hiker needs.

Met up with Wraps, Link, and Caroline, who had gotten a room. Managed to get into their room for the evening. Went to Walmart to get chilling supplies and chilled, quite excellently. With access to a pool and hot tub, we relaxed the afternoon away as some other hikers from the bubble congregated. There is an Asian buffet spot that we hit for dinner, in full hiker style. Afterwards, we had a Game of Thrones viewing party, as the hotel had HBO. The penultimate episode was an intense experience to share, and we all became closer from it. Fell asleep happy and full with snoring hikers lulling me to sleep.

Going to zero here tomorrow, first zero on trail. Then push on to summit Mt Taylor, if the snow is passable. It is a longer section to the next town, Cuba, NM. After Cuba the snow begins in earnest. Which will present it’s own problems. For now, the focus is relaxing and then getting to Cuba. So grateful to be exactly where I am, doing exactly what I’m doing.