The snow in Colorado is 200% more than the average snowpack for the entire state. With some parts of it up to 300% of normal, people are scattering to wherever there is hikable trail. Still don’t know what my plans will be. But I’ve got some ideas. First things first is to get to Chama and finish New Mexico. Here’s the section up to Ghost Ranch.

It was a pretty relaxing zero. Link, Wraps, and Caroline showed up so I hung out with them for the day. Went out for margaritas and then came back to the motel for a Game of Thrones series finale viewing party. The motel didn’t have HBO on any of the TVs but a few of us had accounts on our phones. So we ended up synchronizing the video on all of our phones. And it worked out surprisingly well! Went to bed in the wake of the end of an era.

Woke up and moved to the suite that Link, Caroline, and Wraps (LCW) had. Which they were nice enough to let me crash at for another zero. The weather was pretty uninviting. A mixture of snow, rain, sleet, and hail teased us for most of the day. Went to McDonald’s, barbecue, grocery store, liquor store. Sent a resupply package to Ghost Ranch, the next resupply point. Drank, ate, and was merry with good company and conversation into the evening. Went to bed warm and dry.

The weather was still acting out so I decided to take a third zero. Which is something I’ve never done before. I’ve taken time off trail, but never been stuck in a town for three consecutive days. Some people did walk out, which made the decision a bit hard to sit with. Especially with all my chores done, nothing really to do and getting progressively more stir crazy.

Ate, drank, watched a movie about Ted Bundy. Truly did nothing, which was beginning to be a bit grating on my psyche. Went to bed a bit sad, as our late-night discussions had triggered a past trauma.

Woke up and got out early to get miles under me before the sun heats up the mud and snow. The sun had other plans, as it was already shining and heating up the world. Sloshed through mud to a snowy climb. I was greeted by loads of snow. It was immensely relieving to be on trail again. To be in real quiet after being stuck in a hotel next to a busy road for three days. The blanket of snow added another layer of silence to an already quiet woods. 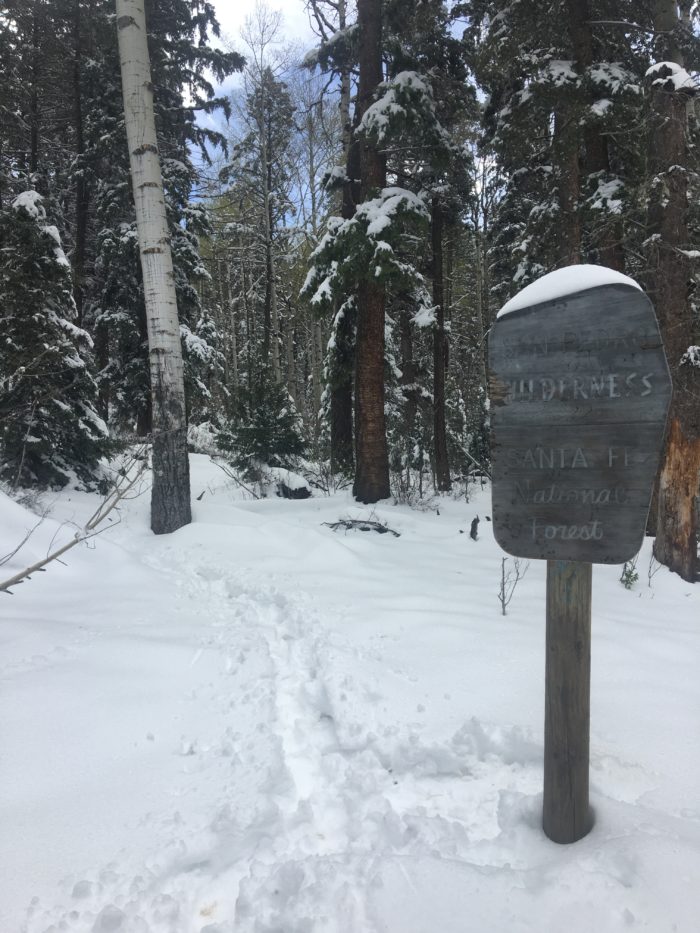 The snow also made for tough hiking. Following a packed footpath was the easiest hiking, though it was still exhausting. Every step some of my energy went to stabilizing the step and getting traction to make the next step. My strides were also shorter as I was following other footsteps and they were smaller strides. So it was either small, quick steps, or longer steps but be postholing.

Postholing is when someone steps in snow and sinks down. It was up to around knee deep in somebody places. There were also some icy rivers that I had to ford. Some unexpected. Had to keep moving after those or my feet would freeze. Caroline caught me and we hiked down out of the snow to a fantastic spring, bubbling right out of the ground. Made a fire under great effort as everything was wet. But Caroline and I had both been envisioning a fire at the end of this day. Wraps and Carmen showed up, as well as two other hikers I had seen around but hadn’t hung out with, HappySkull, EagleCow. Went to bed easily as it was a truly tiring day.

Woke up and slept in a bit for the cold. I also wasn’t planning to do that many miles today. Got hiking and it was beautiful. Aspens starting to bloom spring greens, ponderosa pines shining in their majestic dark greens, fields of lavender lending their purples. The colors were out in force and they were that much more powerful contrasted against yesterday’s snow. 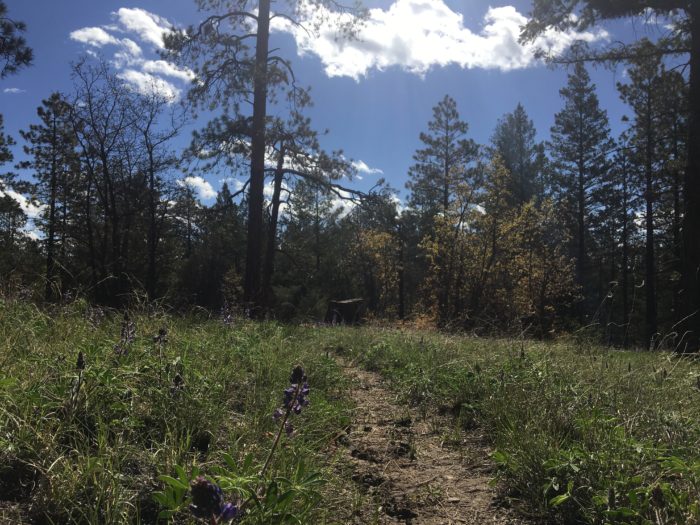 Felt reinvigorated as I scrambled up, down and through dirt trail again. This my element. This is where I am at my most powerful. Running down mountains, powering up climbs. Leapfrogged with everyone a few times during the day. Ended up at the bottom of a canyon surrounded by awesome multicolored walls. Made it to the Rio Chama and camped along it at a nice site with Caroline, Wraps, and Carmen. We had dinner, talked about plans, and went to bed.

Woke up early, got hiking. Everyone had left before me but it was only ten miles of road walk into Ghost Ranch. The trail into Ghost Ranch wasn’t very well kept. So I ended up doing some cross country and fording a small, deep creek up to my waist.

Got to Ghost Ranch and caught up with other hikers, getting plans for the San Juans. A lot of people are flipping up to hike Wyoming. I still don’t know what I’m going to do. But the crew I had been hiking with decided to go to Santa Fe for the weekend, as some feet had become a bit painful and it is my birthday tomorrow.

We split up, which gave me some stress. But all ended up on the same bus down to Santa Fe. Got a nice room, some pizza and beer, and had a nice hang. Went to bed full and happy, excited for the festivities we were planning.

Woke up and immediately felt different. Wiser, older, but not really. Just woke up like any other day. Got breakfast as everyone else got up and came in. We went to REI and felt like a kid in a candy store. Looking at so many things I don’t need but desperately want. Combined with the fact that it was one of the busiest REI’s I’ve ever been in was very overwhelming. Got some socks and got out of there.

It was Memorial Day Weekend so a lot was going on in Santa Fe. There was a cool artisan market outside that I walked through. Thinking about how I could carry a painting without it getting ruined by precipitation. Or how heavy would stone talismans be after a 20+ mile day. Met everyone back at a bar for margaritas as we started the day of celebrating. 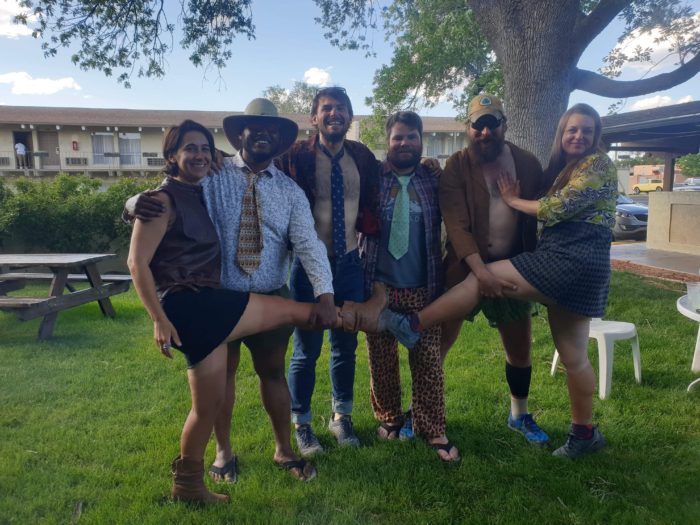 Stopped by a Goodwill to get some outfits for going out. We chose each other’s outfits to make sure we would be as outrageous as we could, and we made out quite well. Got back to the hotel, showered, changed, and pregamed before heading out. It was a good night. Really surrendered to the flow of the evening and it just kept getting more outrageous and fun. Visited three bars, I’m pretty sure. Dancing and drinking the night away, we eventually all made it back to the hotel to get some much-needed rest.

While it was a tremendously fun evening, the morning was not so much. I don’t drink that much in “normal life,” whatever that is. So I didn’t prepare myself for the hammer to drop. And drop it did. The morning was spent recuperating and rehydrating. We managed to muster ourselves to go see Endgame in the afternoon. It was the second time I’ve seen it, but the first for everyone else. I cried again. It truly is a satisfying conclusion to an epic story that I’ve been invested in for 11 years. The others found it entertaining.

Got back to the hotel, had some chicken noodle soup for dinner. Consolidated everything for easy pack up in the morning. Set up a ride back to trail, soaked in the hot tub for a spell, and then went to bed in softness and comfort before heading back out.

Packed everything up and ate some breakfast. We split our two groups as our ride wasn’t big enough to get all of us in one run. He was gracious enough to make two trips, which was fantastic. Watched some Office while waiting for our turn. Got to Ghost Ranch, ate some lunch, and am ready to get back on trail after an amazing weekend. My pack is the heaviest it has been as it is filled with food, water, and snow gear. Ready to tackle any new challenge this trail will throw at me next.