Where the Deer and the Antelope Roam, Part One

This last section was long so I’m splitting it up into two sections. I sit in Lander wondering how best to continue. Basin is done, Wind River Range is melting and flooding, Colorado is still covered. As plans come together here is the first section

After getting back from urgent care I resupplied and packed up. A trail angel, Jinx, drove us as close as she could to the trailhead, which was behind closed roads and snow. She was incredibly excited and kind as she drove us around her part of the state. The ride was a bit cramped but we did see some beautiful landscapes. 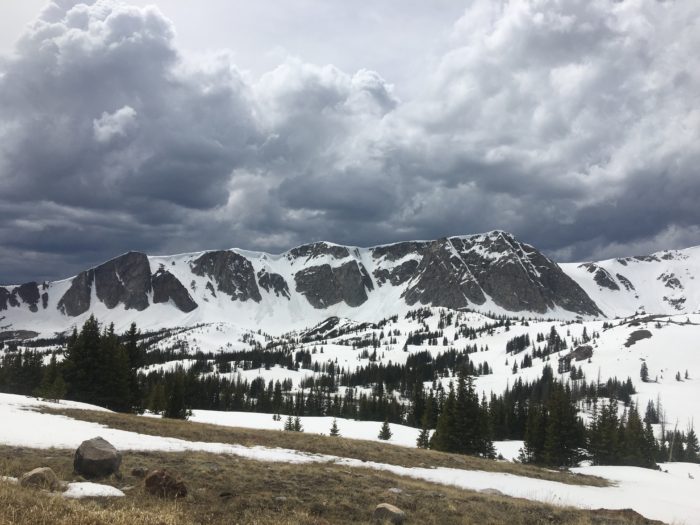 Walked up to the trailhead and set up camp on the road as it was the only flat spot not covered in snow. We all hung out and laughed harder than any of us had laughed in a while. Another group of hikers showed up, which was a bit overwhelming. But they were coming the other direction so we got good information from them. Then everyone went back to their individual tents and we had a tent city on a random forest road in the middle of Wyoming. God, I love this trail.

Woke up and got out early. Had about a mile of snow before reaching a treeless ridge. Had a gorgeous view while climbing up to the tallest peak of the day before we start to descend into the basin. It was a lot of treeless ridge but it would get into forest and there would be so much blowdown that the trail would be impossible to follow. All the blowdown trees would fall onto the footpath and the paths would diverge to find the best way over it all. So mostly I just had a bearing and clambered over fallen trees and snow to get there.

Reached the summit after going off trail a bit to get to the actual summit. Found a glass jar that had a notebook and pen in it to act as a register. It had been place there in 2012 and only six or so people had signed it since then. The last person had signed it in 2016! I was the first person to find that ledger in three years. I marveled at how wild the place I was was as well as the views before pushing on. 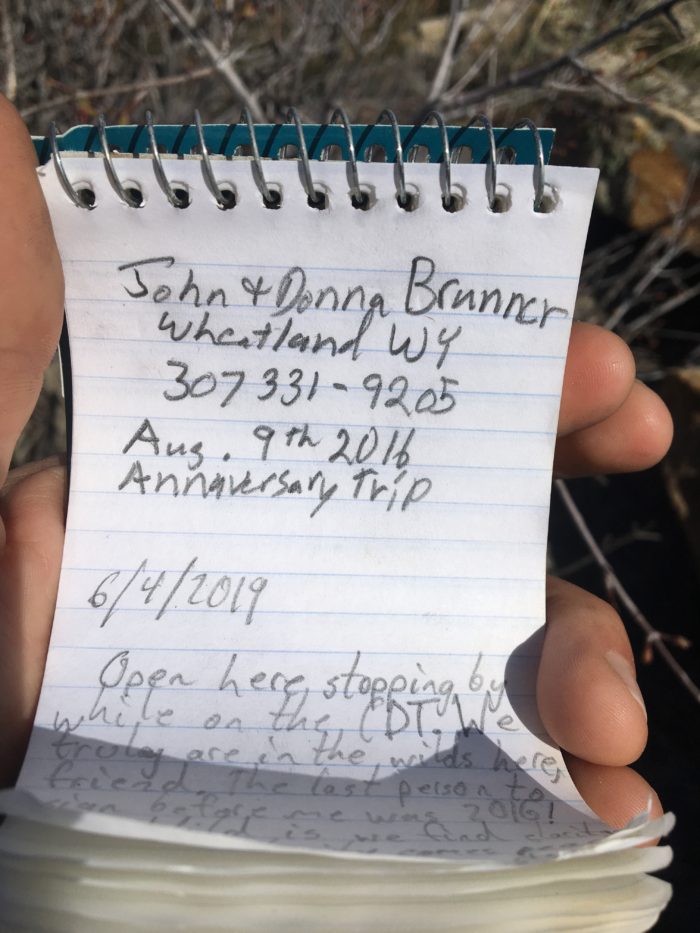 Got lost in a marsh where I found Carmen San Diego. Made our way back to the trail and found Caroline and Riley at a stream crossing. I continued to an overlook that was the last one before the trail drops down on to dirt roads carving through the basin. So I took a break and savored being up on an overlook.

Passed Wraps at the bottom of the hill and got to the dirt road at the same time as Carmen, who had done an alternate. She was planning to take another alternate on a paved road that would shave off 20 miles. I decided to stay on the official route as paved asphalt is probably the most psychologically challenging route for me to stick to.

The official route wasn’t much better. It was dirt road, exposed, no trees, rolling hills. I was occasionally on top of a rolling hill so I could see the landscape around me. But it was just flat, rolling hills as far as the eyes could see. The sky, however, put on an amazing show. With everything so flat the sky took on its largest form. As these floating mountains danced around me some had tails of precipitation falling down from them. Made it to a ride where I decided to camp. The clouds broke and I was treated to a clear and open sky. With a new moon the night before, I witnessed the full majesty of uninterrupted, wild night sky.

Woke up and took some time before getting moving. I want to describe the landscape but it truly is featureless; just rolling hills. It was another place where I could see the trail up to five miles away so I knew exactly what I would be doing for the next hour and a half. A practice in patience and intention. Leapfrogged with Caroline and Riley for the day till I got ahead to stop at a pass for camp. Went to bed thinking about ice cream.

Woke up and got out early. Intention was to get to Rawlins. Got to a place where the trail came close to the highway. I jumped on the highway as it was straighter and easier tread. And the trail would be not well marked or well traveled so a lot of cross country. Ended up hitching in the last five miles as the paved road was just too much for me.

Got in and met up with Link, Wraps, and Carmen. Hung out and just chilled. Caroline and Riley showed up. Got pizza, beer, ice cream. Everything a hiker needs. Had a relaxing, cheap evening.

Woke up after sleeping in and met everyone for breakfast. Intention was to leave town after resupply. Went to Walmart and a grocery store and got everything I needed for the next two sections. Got back, organized and packed. Walked to the post office to send the next section’s food to South Pass City, which was at the other end of the basin. I also sent my winter gear.

Went to a Thai buffet next door and ate; gorged might be a better word. Everyone ate too much and we decided to stay another evening and hike out early in the morning rather than hike a few miles before camping. We also watched another movie, Godzilla. It wasn’t that good. Action was OK, writing was worse. But we were there more for the experience. A liter of soda, snacks, dark room, loud visuals, and overwhelming sound. Got some cheap food at market and went to bed watching TV.