Welcome to our second Mailbag with Jennifer Pharr Davis.  In case you missed it, we’re taking hiker’s questions and passing them off to the trail legend for her wisdom and analysis.

Let’s play catch up. Who is Jennifer Pharr Davis?

JPD has solo thru-hiked the AT and PCT, set the self-supported FKT on the Long Trail, and the supported FKT on the Appalachian Trail.  Her AT FKT landed her the honor as one of National Geographic’s Adventurers of the Year. She has authored multiple books, most recently The Pursuit of Endurance.

But the real reason we love JPD and ask for her input? For such an accomplished hiker, she is “relatively normal” (her words) and incredibly humble. She has figured out how to have a life off-trail as a wife, mother, and professional… and continue hiking. She has kept it classy amid the negativity and tense confrontations that can be part of the hiker trash community, and she has always found ways to give back to the trail and conservation organizations.

Have a question for a future Mailbag article? Email [email protected] and we’ll pass it on.

I was one of the people who did much of the research and information dissemination with regard to the Stacey Kozel controversy. I think there emerged something fundamental about the fact that many people felt that Stacey’s ruse jeopardized the integrity, blood, sweat, and tears of those in the community who actually hiked even a portion of the trail. One issue that is still out there is that the very well-respected group, Trail Dames, are hosting a summit this summer and Stacey is a keynote speaker. I would be very interested in Jennifer’s perspective on this topic. – Lynn McDougal

Seriously?! Let me guess, next time I’m going to be handed a question about Kaiha Bertollini. (No really, please don’t send that to Mailbag. I need at least one column under my belt that doesn’t weigh in on high-profile hiker controversy.)

For those of you living under a rock (lucky you) Stacey Kozel announced her completion of the Appalachian Trail in 2016…. as a paralyzed hiker with mechanical leg braces. She received buckets of positive press as a result. The following year, she reported that she finished the Pacific Crest Trail. At that point, questions started to arise about the authenticity of her claim and, posthaste, a mountain of evidence arose to prove that Stacey did not thru-hike the PCT – she might not have even set foot on it! Shortly thereafter, her AT account was also in the process of being debunked.

When I was a novice thru-hiker, false claims raised my dander because it seemingly cheapened my experience. I know how hard it is to hike the AT and PCT and when other people stated that they finished one of these paths after skipping large swaths of mileage, I didn’t want to be counted in the same category. They had not earned the right to be called a thru-hiker.

I do not think that individuals should lie or misrepresent themselves when it comes to completing the trail—or in most any facet. Looking back, I also think that part of my disdain for the dishonestly was rooted in not wanting to share praise or attention with people who I deemed undeserving.

The years have passed—along with several thousand more miles—and I’m no longer bothered by people like Stacey or Kaiha Bertollini. (See? Now you don’t even have to ask.) I know that the greatest return on any hike is an intrinsic reward. Other people’s stories can’t change or alter my experience.

While I’m not incensed by Stacey Kozel, here are my two concerns:

The media gave Stacey undeserved attention because they reported a story as opposed to facts. If a reporter had taken the time to walk with Stacey for even a few hours, fact-checked her story, or completed in-depth interviews, the truth would have quickly been exposed. Unfortunately news has to be generated so quickly and in such large quantities that journalism has suffered. In a flashback to last week, let’s remember that not everything on the internet is true.

Admittedly, I would have greater qualms with Stacey Kozel if I had completed the trail with a disability. She became a spokesperson for hikers with physical handicaps and she did not represent them well. There have been amazing—and trustworthy—individuals who have completed long trails with special needs. Trevor Thomas thru-hikes with his seeing eye-dog Tennille, Wesley Trimble finished the PCT with Cerebral Palsy, and Niki Rellon walked the Appalachian Trail with a prosthetic leg. Willingly or unwillingly, we represent more than just ourselves and it is unfortunate when our actions reflect negatively upon others.

Stacey is not the first person to lie about hiking a long trail, nor will she be the last. However, she comes with more intriguing circumstances than perjurers of the past.

Truthfully, I find her a compelling individual. I ask myself, what would it be like to be in her mind and body? What would it be like to want nothing more than to walk a long-distance trail and, yet, not be able to move your legs? How far would you go to make your dreams come true? If you tell yourself you accomplished your goal, if other people believe you, does it make a life in which you feel trapped within your body more bearable?

I would love to listen to a talk from Stacey and ask her these questions. My hope for the Trail Dames summit is that the literature for Stacey and her introduction at the talk is truthful and empathetic. I think it would be extremely empowering for her to take ownership of her story, share her shortcomings, and talk about how her time on the trail and in the trail community impacted her. I don’t believe that Stacey has hiked the Appalachian Trail or Pacific Crest Trail – and it’s fair and appropriate to call her out on that. But it’s worth pointing out that she still could hike either trail, probably in sections and potentially with help, and that gives us the opportunity to walk beside her and help someone overcome unique challenges to fulfill her dream.

If you are bothered by the fact that Stacey is potentially profiting off of her dishonesty, don’t be. I assure you, it is very difficult to make a living as a professional hiker—even if you have accomplished something on trail that no one else has.

Occasionally folks who have undergone notable journeys are also able to create and sustain a company related to hiking, but trail prowess and business acumen are two totally separate categories. There are numerous hikers who have recorded superhuman feats and are unable to make a living through trail-related ventures. On the other hand, the two individuals who have profited the most off of long trails, Bill Bryson and Cheryl Strayed, have never completed a thru-hike. I doubt that Stacey has reaped much financial gain from her false claims and the payments she has received are most likely negated by her tarnished social image.

So this season, when other hikers lie about completing a trail, or multiple trails, or hiking 2,000 miles without a resupply, or flapping their arms and flying between Mount Whitney and Mount Hood, remember that the trail is based on the honor system, but other people’s lies don’t steal from your experience.

The individuals who make false claims are only cheating themselves.

Want to chat with JPD about this subject? She’ll be hosting a live session on her Facebook Page on Friday, March 2nd at 1:30pm EST. 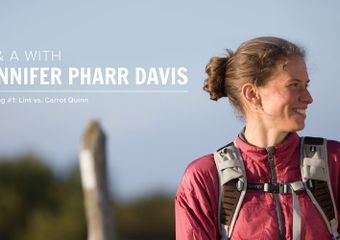