“You’re from the East Coast? Why the PCT and not the AT, then?”

I should’ve seen this one coming, I know. But the first time I was asked this question on-trail, I wasn’t ready for it. I figured they probably didn’t want to hear my knee-jerk reaction, which was something along the lines of because that’s what I wanted to do. What I actually ended up saying was, “because I wanted to see more of the West Coast.”

The more I thought about it, the more I realized that my answer had really been on point. These two coasts—and corresponding trails—share some similarities but are also different in many ways. In part, these differences are what make each of these trails so unique. They’re also what ultimately led me to go with the PCT. 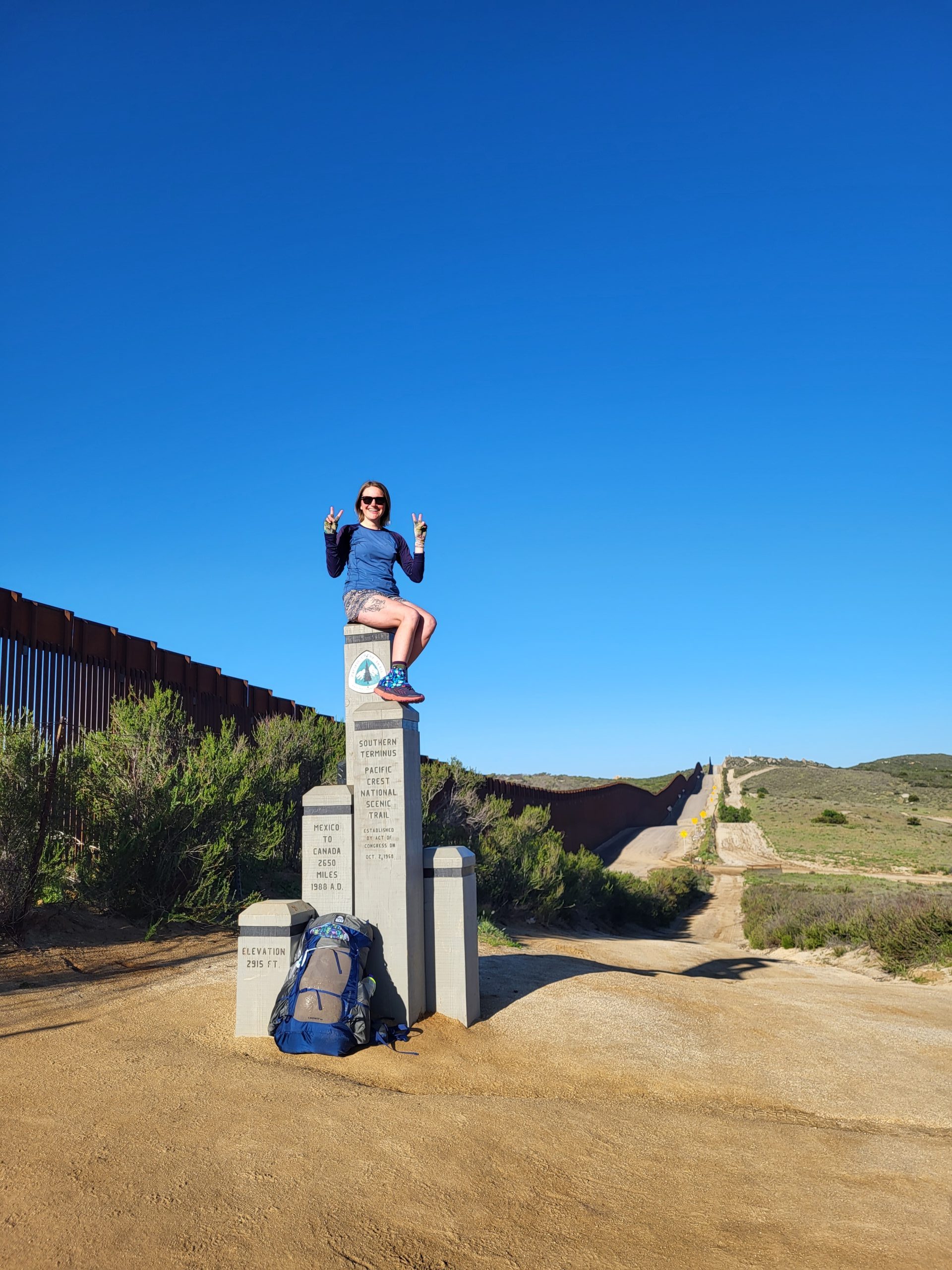 All smiles at the Mexican border.

For me, hailing from the East Coast just wasn’t a solid enough reason to pick the AT as my first thru on one of the “Big Three” trails. Before anyone gets the wrong idea, let me say this—I love the Appalachian Mountains (pronounced app-uh-LATCH-uhn down here in the southern parts). They are so special. I grew up in Southern Appalachia and spent the better part of two years living up in New Hampshire, which is where I first learned to backpack. I’m already familiar with these beautiful mountains, and I felt that it was time to experience something new.

READ NEXT – Which Triple Crown Trail Is Right for You?

I’m not sure “temperate rainforest” is what people first picture when I tell them I’m from Western NC, but that’s exactly what it is. Annual precipitation here is upwards of 60 inches, so trust me—I know all about rain. I know enough about it to know that that wasn’t the type of climate I wanted to hike in for days at a time. I love the sun, and what better place to get that for days on end than sunny California? After all, the California section makes up over 63 percent of the entire hike on the PCT.

What about the PNW, you say? Luckily, I didn’t get rained on much at all during my hike. Instead, I had to contend with fires (which I’ll get to later on). However, if I had encountered a lot of precipitation in Oregon and, specifically, Washington (which is what I expected), that’s where my upbringing in a temperate rainforest would’ve come in handy, right? Wink, wink.

The Appalachians are old. So old, in fact, that the Sierra and Cascades are considered young in comparison ( at least in geological terms). For this reason, the Appalachians are also not as tall as many of the mountains out west. It doesn’t make them any less spectacular (just look at Mt. Washington and Katahdin), it just makes them different.

I had heard so much about the grandeur of the High Sierra and the North Cascades that I knew I just had to see them. What better way than to knock them all out at once on a thru-hike? Also, these mountains get bonus points for having cool critters like pika and marmots, which we do not have out east. Oh, and did I mention that many of the mountains also happen to be volcanoes? 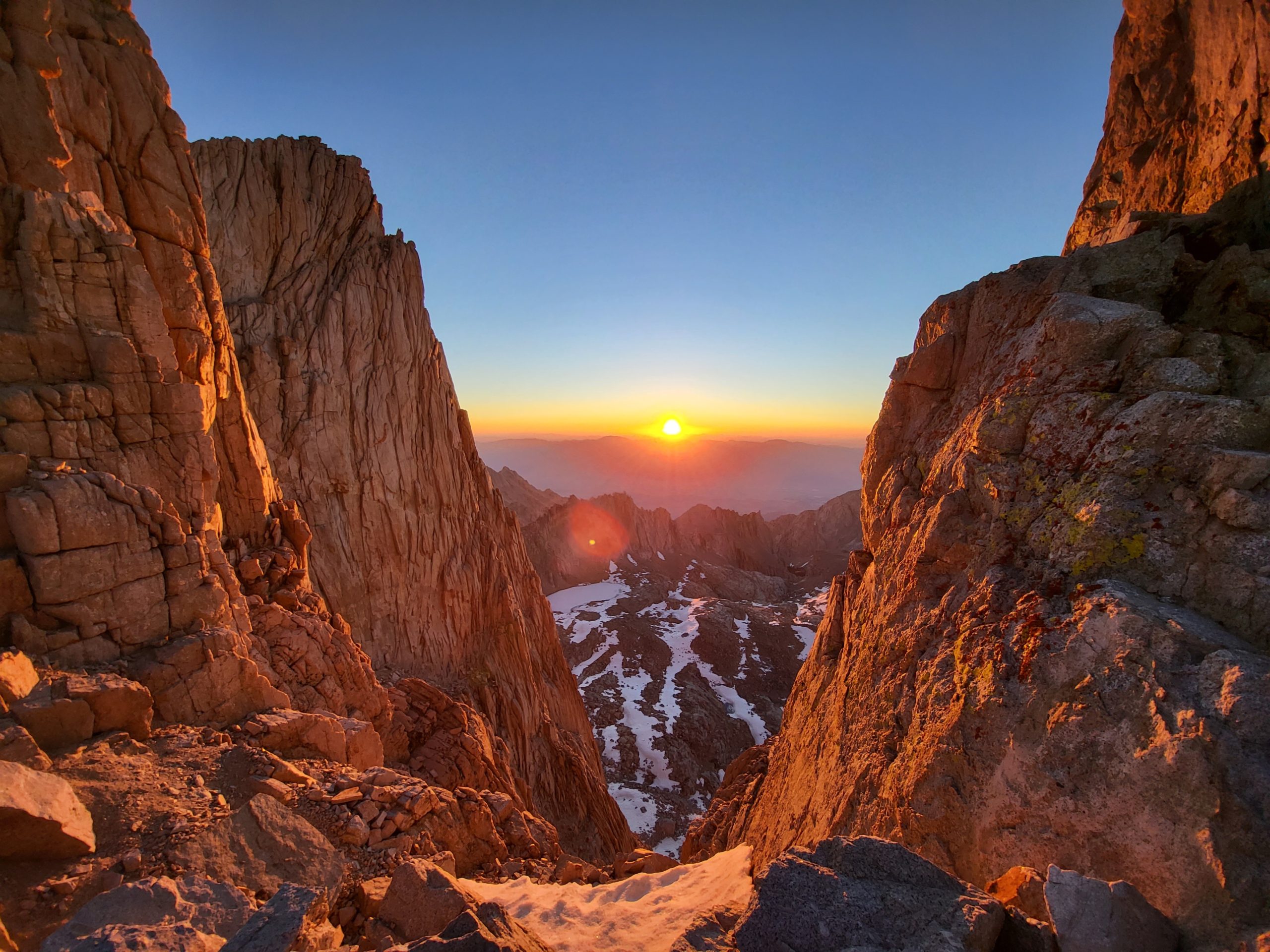 Sunrise views from Mt. Whitney—not technically on the PCT, but a worthwhile side trip!

I think that I’m set for a little while now, but I truly did love hiking through Southern California. This “desert” portion of the PCT is incredibly diverse and isn’t all what one would typically think of as desert terrain. During my thru-hike, I heard different hikers comment on several occasions that the desert wasn’t what they thought it would be. Yes, you’ll walk through some very hot, dry sections, but mid-day siestas can be a nice way to switch up your hiking schedule, and thankfully, trail angels maintain some incredible water caches in the driest sections. Plus, night hiking the section along the LA Aqueduct is somewhat of a tradition.

Oh—and did I mention that Joshua trees are really freaking cool?? 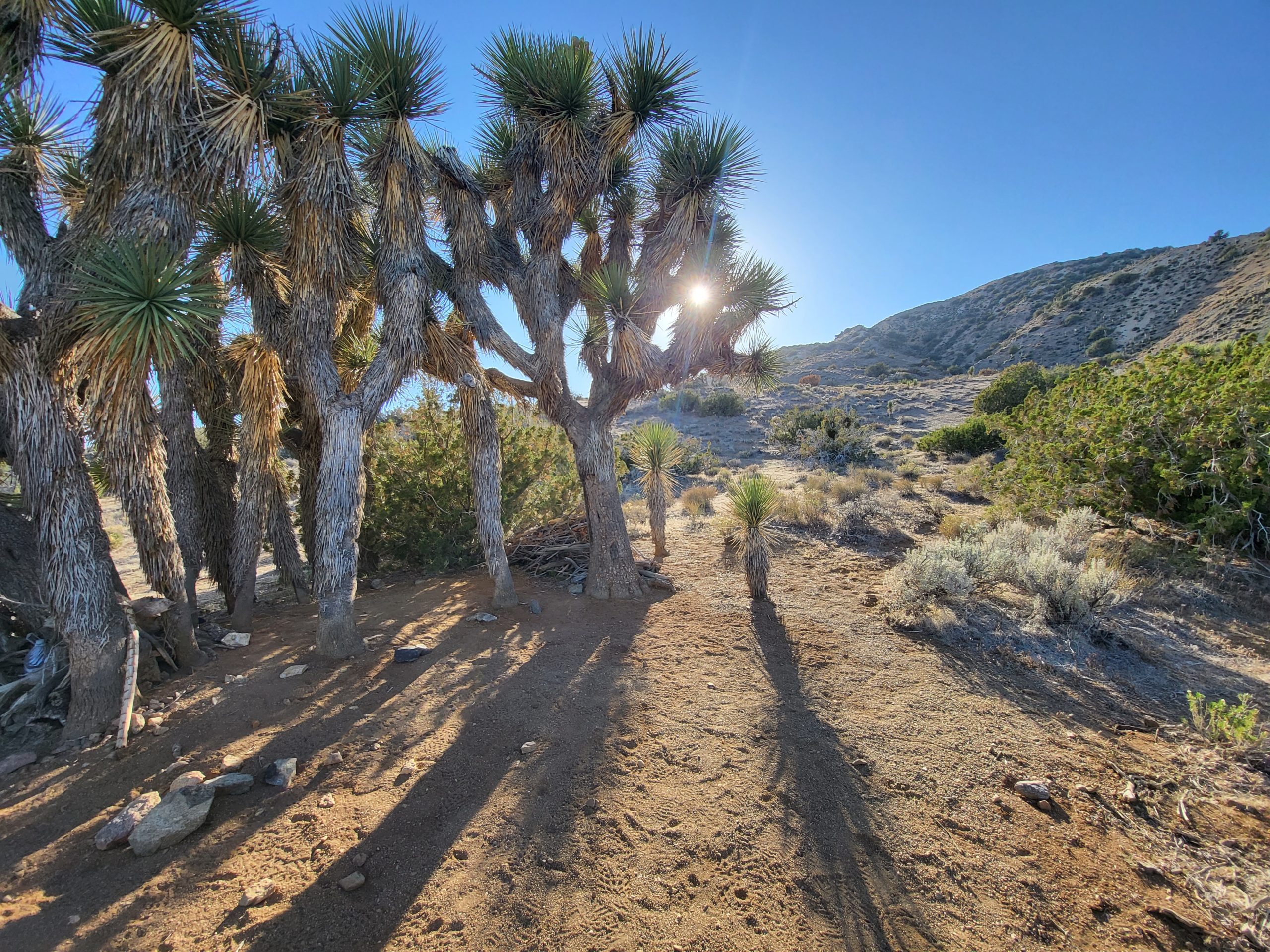 A few miles north of Tehachapi—the last bit of desert before the Sierra.

It’s no secret that wildfires are becoming increasingly common on the PCT. We largely have climate change to thank for that. This year, one of the worst things that could’ve happened did. The beloved northern terminus was closed due not just to one, but multiple wildfires that developed in the beginning of September. Imagine walking for nearly five months and not being able to reach the official finish line. That happened not just to me, but to countless other hikers as well. Large sections in California and smaller sections in Oregon were also closed from fires.

Personally, I felt a strong sense of urgency to hike the PCT before it was “too late.” That may seem melodramatic, but it’s highly likely that thru-hiking the PCT in the traditional sense will become less feasible over time. Realistically, alternatives such as flip-flopping and section hiking may very well become the new norm. 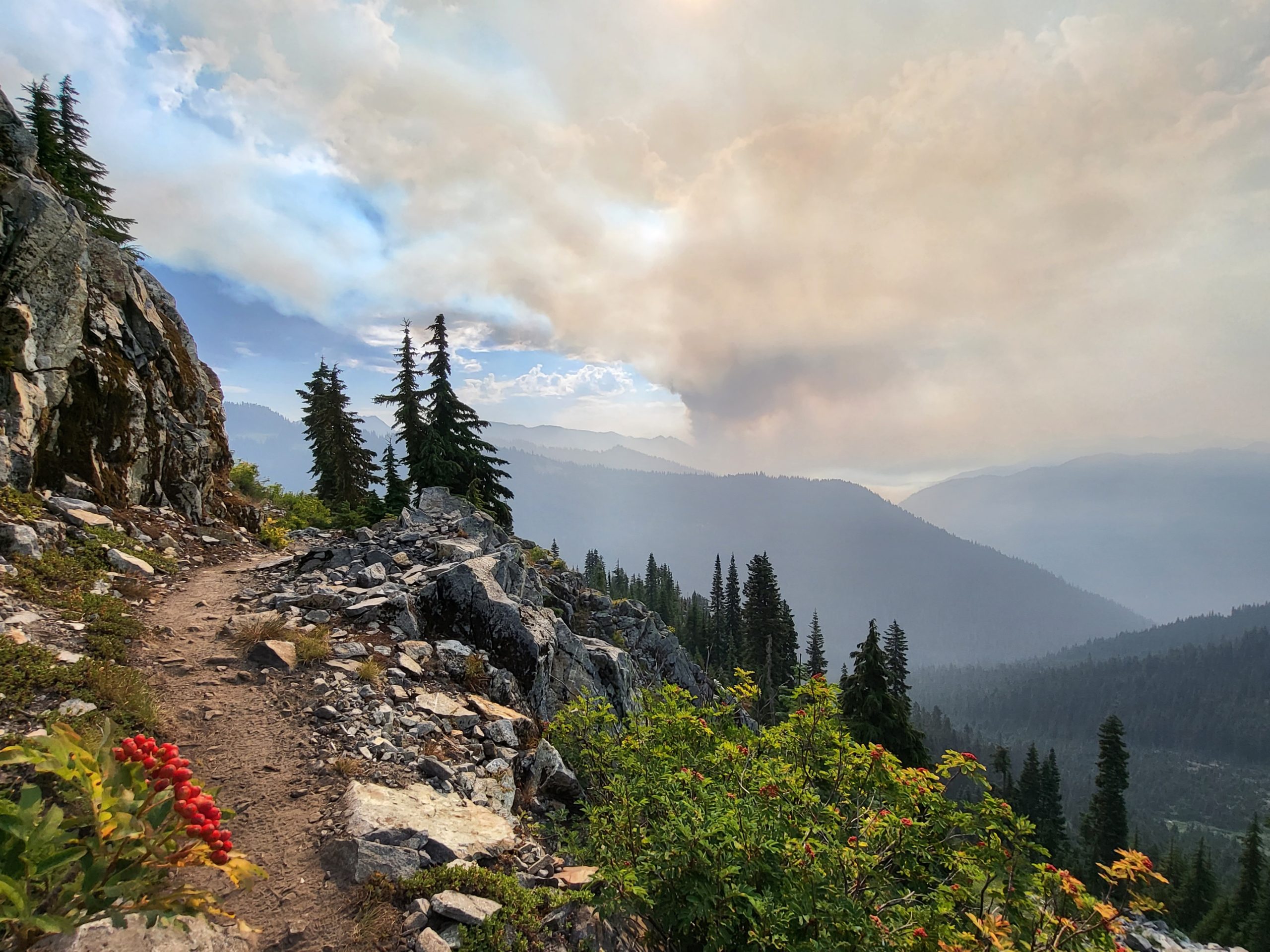 Fires in the distance.

This may sound cliché, and I don’t care. I loved reading Wild. If I remember correctly, that was the first-ever memoir I read about the PCT, and I was nothing short of mesmerized. I went on to read a slew of other memoirs including, but not limited to: Thirst by Heather Anderson, Girl in the Woods by Aspen Matis, and Journeys North by Barney “Scout” Mann. Would recommend. I’m a big reader in the first place, so when I got hooked on PCT memoirs and other similar adventure novels, there was no stopping me.

I read several fantastic books on the AT as well, but the PCT had already won me over. Honorable mentions for AT books: Grandma Gatewood’s Walk, AWOL on the Appalachian Trail, The Unlikely Thru-Hiker, and Mud, Rocks, Blazes.

Did you know that in comparison with the other National Scenic Trails, the PCT is the most remote and passes through the most miles of designated wilderness? I don’t know about you, but that’s exactly the type of experience I was looking for. I was drawn to the idea of being immersed in nature and having the increasingly-rare opportunity to “unplug.”

The PCT is also comprised of nine different ecoregions—old-growth forests, alpine tundra, grasslands… you name it. I come from a science background, so I may be a bit biased, but I think this is super cool. If you happen to be interested in this side of things, check out this article about one of the roles that the PCT and other National Scenic Trails play in conservation efforts. When I set out to hike the PCT this year, it was important to me that I do so in a way that prioritized sustainability. A lot of waste is inadvertently produced through backpacking, especially in regard to food packaging. I prepared most of my own meals ahead of time and bought the remainder of my meals from Fernweh Food Co and bars from LivBar—both companies that solely use home-compostable packaging. If you want to learn more about the low-waste side of my adventure, read here.

The thing is, I’m not sure that I would’ve had the courage to take on this project if it hadn’t been for Trek Ambassador Ana Lucía. Known on trail as “Eco” aka @wastefreepct, Ana successfully hiked the PCT waste-free in 2021. She is a huge advocate for sustainability in backpacking and the outdoors. My own low-waste journey was made possible largely because of her efforts.

There are many other reasons I could list, but to spare you the time, I will say this instead: the PCT is incredible. If this trail is beckoning to you, I’m so happy for you—know that some epic adventures await. If not, that’s okay, too! There are a vast number of other amazing trails out there as well, some of which I suspect will end up on my bucket list, too…

If you think you might want to embark on your own PCT journey, check out the article “8 PCT Thru-Hikers Share Their Top Advice.”

Be sure to subscribe to The Trek’s newsletter so you never miss an update.

Hey y'all! Rachel aka "Dobby" here. I recently finished my low-waste thru-hike on the PCT (Sept. 8) - whoot whoot! More about me... I use she/her pronouns. I'm from Western NC, just outside of Asheville. I called NH home for a bit as well! I love all things nature (obviously) and when I'm not hiking, I'm probably reading, writing for this site, or hanging out with my dog Lily. Happy adventuring and thanks for following along! :)