Is it just me or does anyone else think getting out of town and back on the trail the hardest part of a thru-hike? After enjoying the luxuries of town: shower, comfy bed, food, and beer, it’s very tempting to just stay. In fact, our friend Gables loved Idyllwild so much that she wanted to propose to someone from town and live there! It was extra difficult to leave town because a lot of our friends were taking a zero and spending another night in Idyllwild.

Since I’m used to getting up at 5:30 AM every morning, I was wide awake in the hotel. Frisky and Andrew were still sleeping so I took advantage of the comfy bed while re-reading PCT books (Thru Hiking Will Break Your Heart and Hiker Trash) for the sections of the trail that we have done so far.

Around 9, we made moves and went to Idyllwild Bake Shop and Brew where I got a double Americano and some breakfast tots. 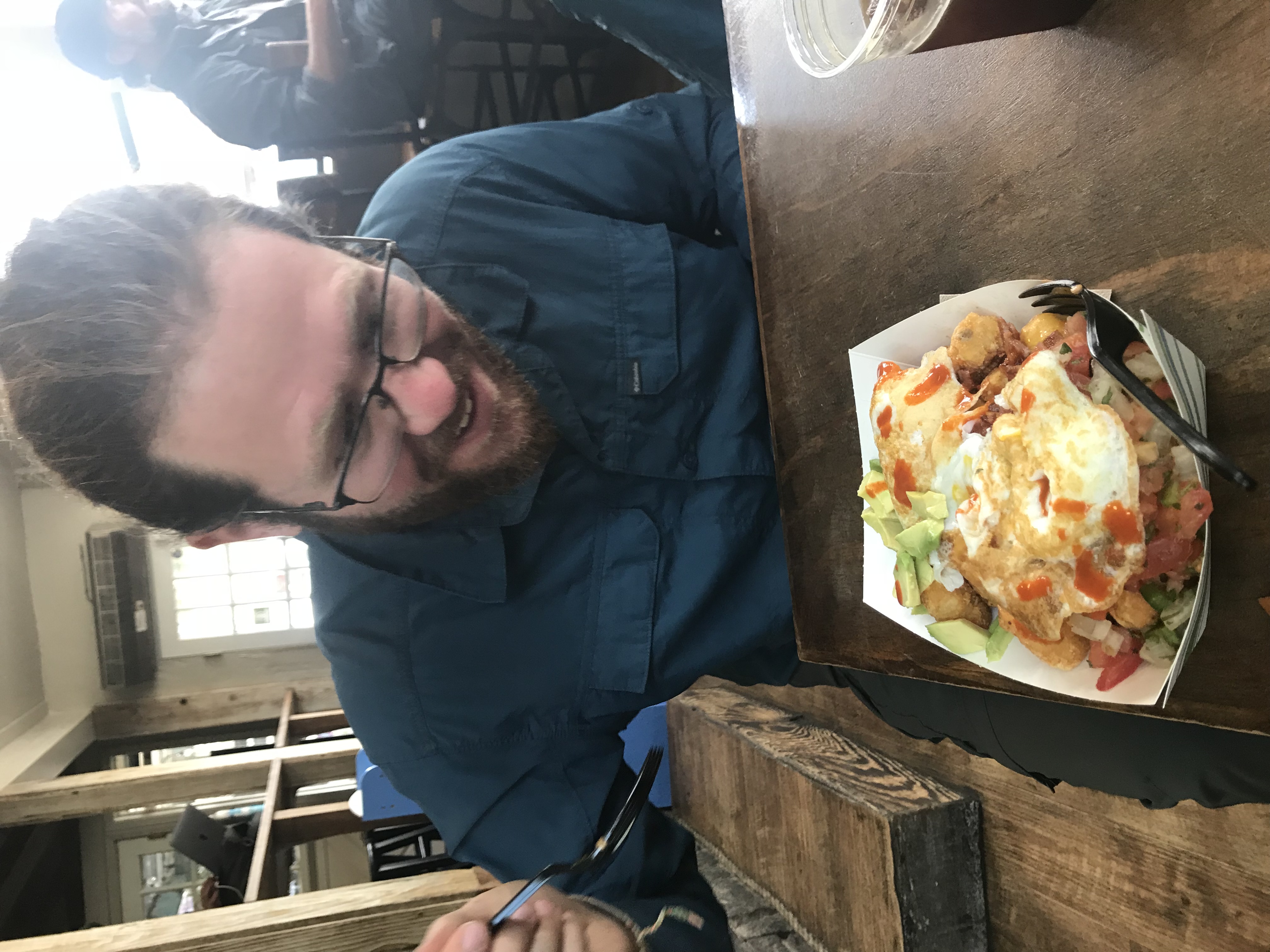 Wish I could eat these breakfast tots every day

Back at the hotel, we ran into Grumpy (a trail angel who was giving rides back to Paradise Valley Cafe) and made plans to get back to trail around 1 PM. Frisky and I wandered around town to kill some time, and ended up meeting Mayor Max! 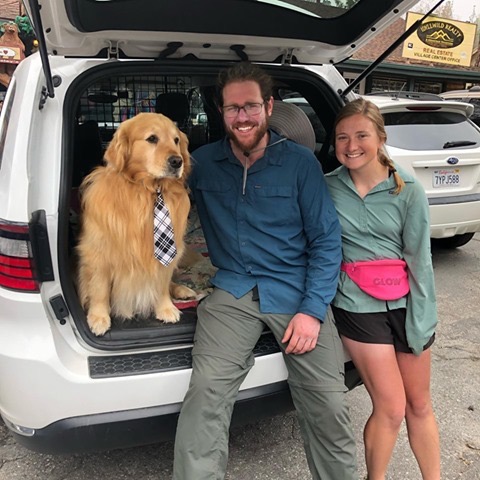 For some reason, I bought enough food for a 6’2” man at our resupply in Idyllwild so my pack was the heaviest it’s been so far. “The Shady Bunch” (Luke, Janet, Andrew, Frisky, and Me) made it 8 miles and set up camp for the night. Even though I had tacos in Idyllwild, I was still craving them so I packed out some rice, a tomato, an avocado, some hot sauce, and the tortillas I was still carrying from Campo to make some more tacos.

Despite advice to put the heaviest stuff at the bottom of my pack (my food bag), I stubbornly started the day with my food bag at the top since I love the convenience of being able to grab my snacks. After struggling uphill for a few miles, I made an attempt at increasing my “worn weight” to lighten my pack but ultimately gave in and followed the advice. 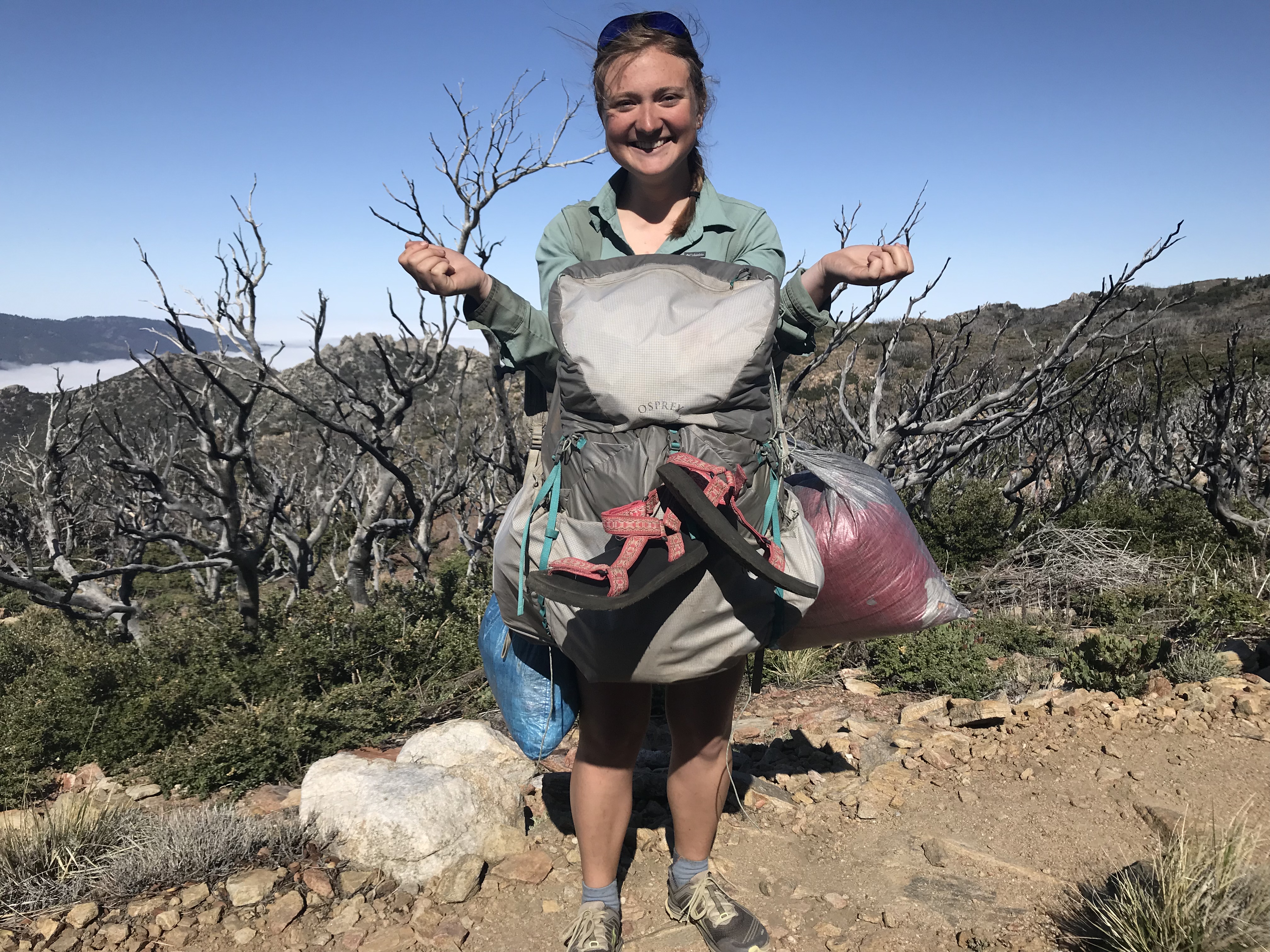 The next stretch of trail before lunch was 3 miles and 1,500 feet of elevation gain. When we ran into Woodpile in Idyllwild he told us that the trail “got steep like the AT” after Paradise Valley Cafe, and he was right. After this climb, we reached the trail junction for Apache Spring which was 0.5 off trail and 500 feet below us. The comments on Guthook told us to “prepare for pain,” so we left our packs at the trail junction while we went to get water.

Since there was little shade, we weren’t able to have our usual siesta fiesta, but we took a break before continuing on another 6 uphill miles to our campsite for the night. A few miles before camp, I rolled my ankle but luckily it felt better after a few minutes. A few of our friends have gotten off trail because of injuries so it was a scary moment and getting injured is the thing I’m most afraid of on trail. This was the hardest day of hiking yet but also the most beautiful.

On the east coast, I consider myself a peak bagging addict. Before the PCT, I was in either the Adirondacks or White Mountains every weekend trying to add peaks to my 4,000 footer list. Because of this, I surprised myself when I wasn’t super motivated to bag San Jacinto. After the previous day’s uphill climb and my stupid heavy pack, I wasn’t excited about more strenuous uphill. I also joked that San Jacinto wasn’t on any of my peak bagging lists and the normal PCT around the mountain seemed pretty nice (the trail to San Jacinto is an alternate and not an official part of the PCT). Despite this, the rest of my friends were summiting San Jacinto so I felt I had to join (and I’m glad I did). The trail to the summit was a lot of switchbacks, alternating between snow and bare rock. We brought our microspikes, but it was challenging trying to decide whether or not to take them off. It seemed as soon as we took our spikes off we would run into another patch of snow. 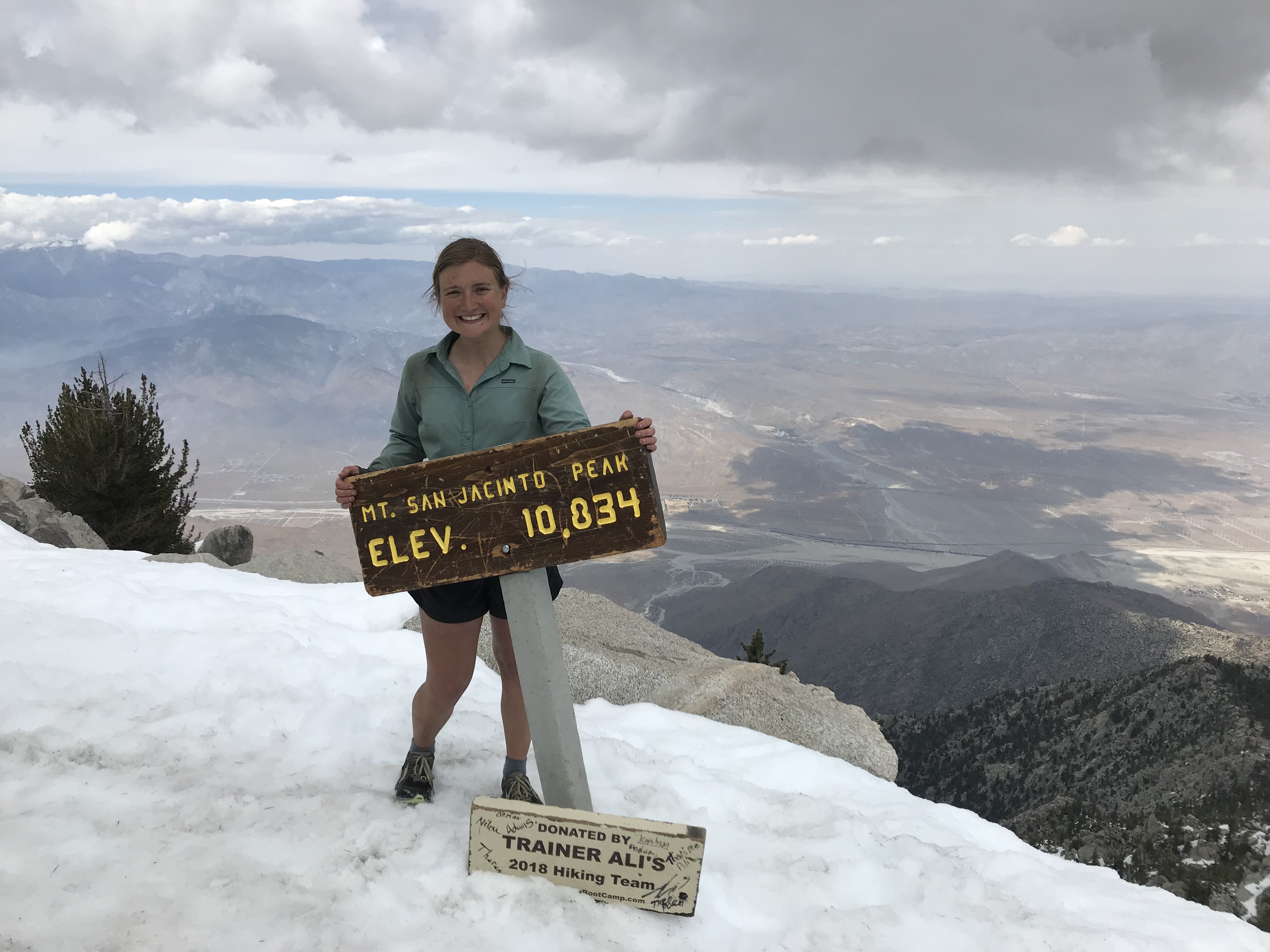 We planned on doing a loop hike rather than an out and back so after lunch at the summit, we started our descent. In my opinion, the hike down from San Jacinto was much harder because it was difficult to tell where the trail was. There were a lot of sets of footprints to follow but not all of them were on trail. Someone had made a 300 KM sign out of rocks, we joked it was “something special for the Canadians”, and snapped a picture for Luke and Janet.

Miles 187-190 of Fuller Ridge were supposed to be the most sketchy, so we set up camp so we could tackle it the following morning before the snow started to turn to mashed potatoes. At camp, we were excited to run into Kate who had to take a few days off for her infected blisters to heal. After hiking crazy miles she had managed to catch up to us. I have gotten a few trail name suggestions so far but am having a hard time committing to just one. Because of this, Kate suggested the name “Identity Crisis” which is pretty fitting but I don’t think I’m ready to commit to that one either.

Since Andrew was meeting his parents at night, he was planning on hiking the 22 miles from our campsite to Cabazon. Frisky, Kate, Janet, Luke, and I were originally planning on camping a few miles from Cabazon and hitting Walmart and In and Out the following day. However after hitting the 200 mile marker, we all decided that it would be a lot more satisfying to have In and Out after a long day of hiking and committed to the 22 mile day. 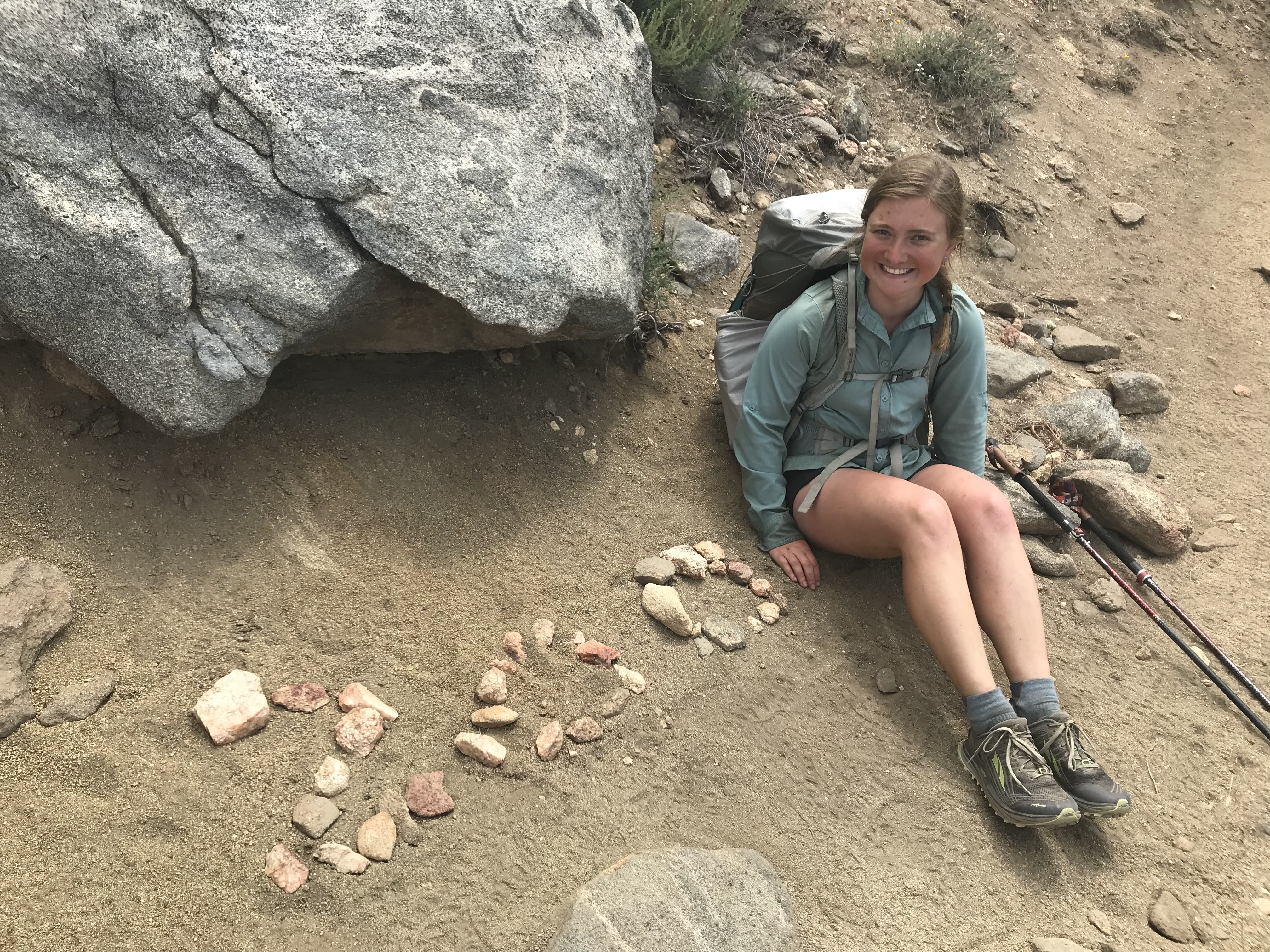 Only have to do this 13 times

Since we had to descend from 8668 feet to 1341  feet this day was all downhill! After making a dent in my food bag, my pack felt like it weighed nothing for a little while. I even made up a song set to the tune of “The Ants Go Marching”

At Mile 205.7, Guthook listed a “large rusted pipe” as a water source that we were all excited for. As we made our way downhill, we all took turns making up songs about the large rusted pipe set to the tunes of “Barbara Ann,” “Piano Man,” and even the Canadian National Anthem. Once we got to the pipe, the hikers that were already there complimented our rusty pipe songs.

The last 3.8 miles in to Cabazon were the worst miles of trail so far. It started off on a paved road, so I started jogging while joking that I needed to “get my exercise in” before going to In and Out.  I regret jogging because soon the paved road turned to deep sand which was made even harder with the wind blowing in our face. We finally reached the I-10 underpass and waited on the side of the highway for our ride. At In and Out, I got a text from my best friend Godiva that she was in Palm Springs and wanted to hang out the next day. Too tired to think or make any decisions, I started to cry for no reason. We had originally planned to go to In and Out, Walmart to resupply, and then back to the I-10 underpass to camp for the night. Since it was late and the underpass seemed loud and creepy, we went to the Walmart in Beaumont and then all split a motel room for the night. When we were in the snack aisle in Walmart, a woman made a comment that the aisle was too smelly and she needed to go to a different one! 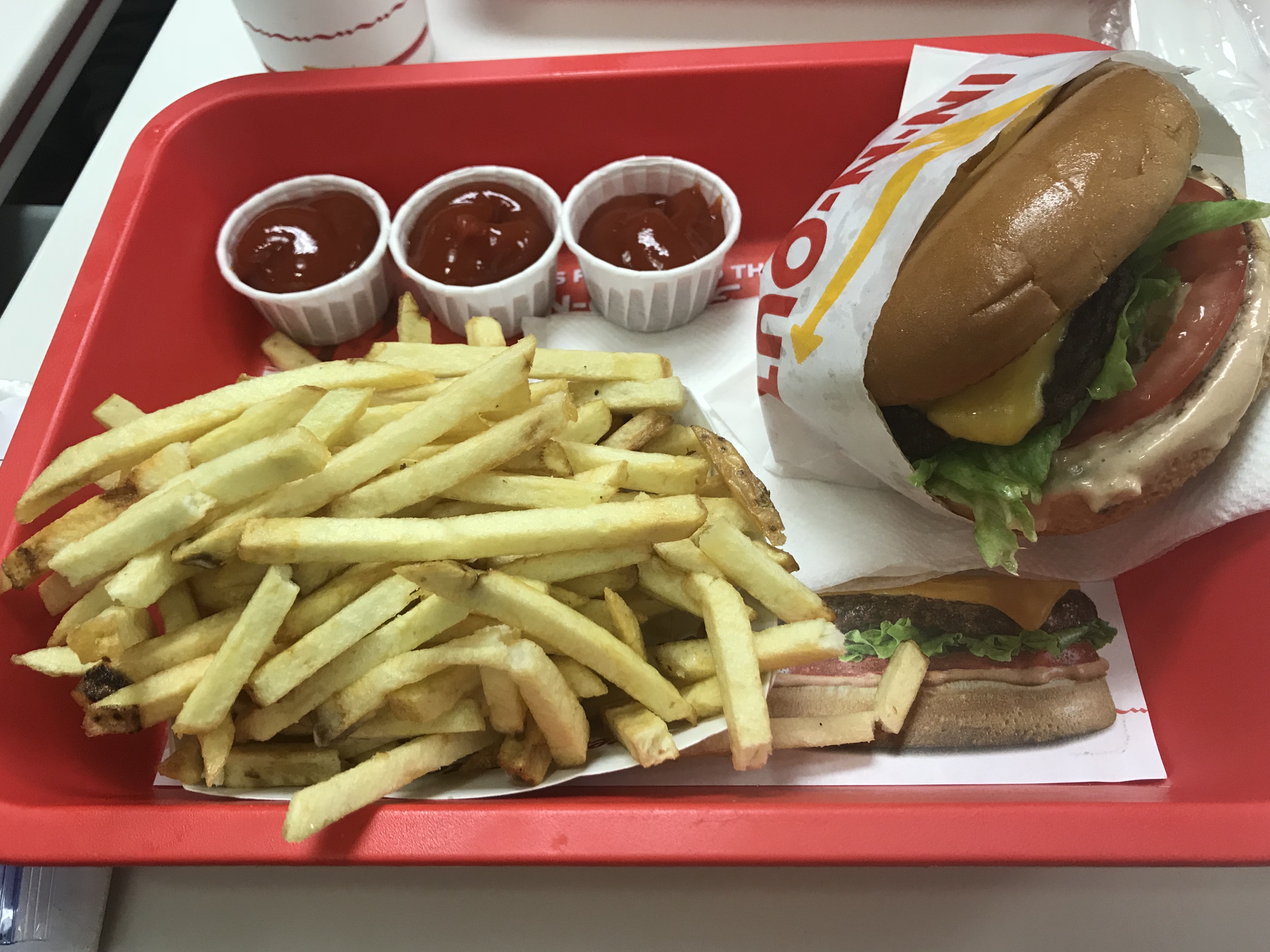