This afternoon’s landscape was eerie.  The trail led through severely burned areas, with the addition of smoke that had blown in from a wildfire miles away.
I’ve learned that some wildfires burn hotter than others, incinerating growth to different degrees.  This area seemed like it had been completely decimated by a past fire, with only bare trunks left standing.
The landscape from the past wildfire was coupled with the smoke coming in from a current wildfire, with views and sky so hazy grey.  The landscape stark, hot and exposed.  My breathing was not impaired, but I could smell the smoke all that afternoon. 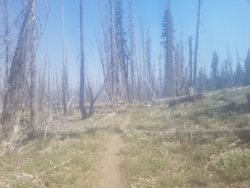 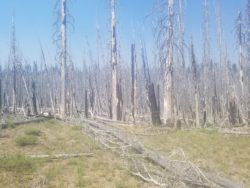 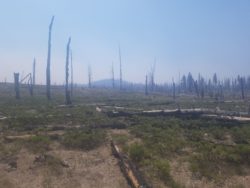 I stopped to take a snack break, and a few friends walked by me, heads down, both earbuds in place, listening to their audio and seemingly just slogging through.  I called their names and neither one saw or heard me.  I thought, this is a hellish kind of place to be in.
Although, throughout the day, we had been able to see Mount Lassen, often faint through the smoke, and always impressive.  One of my friends says it’s like seeing the ghosts of mountains, when you see a mountain hazy through smoke like that.  We did a distant skirt around Lassen all day.  Pretty neat to see, this volcano that stands above 10000 feet.
With time, we learned that the smoke was probably coming from the nearby Dixie Fire, which reportedly sparked on July 13th.  I’ve had a few friends describe hiking through that area after me, with smoke so heavy that their throats were sore, and ash raining down on them as they hiked.  I was able to hike through Lassen Volcanic National Park without much difficulty, besides emotional unease, but within the week, the PCT was closed (over 100 miles of trail closed!) due to thick smoke blanketing the trail.
To this point, the Dixie Fire has burned nearly 249K acres and is 35% contained, according to headlines.  As always, it boggles the mind to consider a number like that, all that acreage.  I’ve also read that it prompted evacuations, and destroyed over a dozen structures.
There has been a general sense of unease lately among the hikers around me.  Most everyone hopes to hike as much of the trail as possible, and some are increasing their mileage with that goal in mind.  I don’t have the desire to greatly increase my mileage to that end, but I understand the reasoning.
It’s disheartening to walk through these landscapes, but also a valuable part of the trip, to see these things for myself.  Of course, I am affected only indirectly, as a traveler passing by.  I keep the firefighters and personnel fighting the fire, the communities and trail angels and all those affected by the fire, in my thoughts and prayers.
< Previous Post
Next Post >