There was nobody else at the summit of Mount Baden-Powell. It was about 45 minutes after sunrise, and I was admiring the view to the west. I could see the desert to the north of the San Gabriel Mountains, and the Los Angeles Basin to the south. The L.A. air was still quite clear, so Downtown, the ocean, and Catalina Island were also visible. Soon after starting the descent, I met the first of the day-hikers heading to the top. I also noticed a helicopter hovering over the Angeles Crest Highway to the west.

Several miles later, I arrived at Inspiration Point to find very few cars on the road. Eventually, a tow-truck stopped to give me a ride. The driver had spent most of the morning trying, unsuccessfully, to winch a car out of a ravine. The police helicopter had had more success winching the (drunk) driver to safety. Yet another reason to be careful when road-walking, I concluded. The tow-truck driver received a call to another job, so he had to drop me off before we reached Wrightwood. This time, I didn’t have to wait long for a car to stop. The driver, Doug, stopped again a few minutes later to pick up his wife (trail name: Bitchin’). She’d recently finished hiking the PCT, and very kindly gave me a box of leftover food and other goodies.

I checked in at the Cedar Lodge and bought two, five-day resupplies at Jensen’s. The next morning, I mailed one of the resupplies to Warner Springs. As I was leaving the motel, I got chatting to one of the locals, Denise, who offered me a ride back to the trail. During the drive, she warned me about a large weather system due to arrive a few days later. She was doubtful that my shorts/t-shirt combo would be a match for rain and freezing temperatures. I assured her I was carrying wet-weather clothing, but I don’t think she was convinced. Before she drove away, she gave me her number and told me to call if I got into trouble. Her parting words stayed with me, “I don’t want to hear about you on the news.”

Three days later, I woke to warm temperatures and saw that the pre-dawn sky was still clear. Maybe I’d been lucky; perhaps the bad weather had passed to the north. I started hiking before sunrise, but soon noticed the clouds pursuing me from the west. Just after the Mojave River Dam, I passed fellow SOBOs Bunkhouse and Spud (B&S), who were in the process of breaking camp. As I hurried past, in case they hadn’t noticed it, I pointed over my shoulder at the wall of rain sweeping across the valley.

The trail climbed slowly as it meandered to the east, following the ravine carved by Deep Creek. I maintained a relatively fast pace, convinced that I was managing to stay one step ahead of the weather. Gradually, the gorge turned south, more raindrops started to fall, and I realized I was losing the race.

Turning yet another corner, I caught the full force of the wind for the first time. The intermittent rain became a downpour and I hastily put on my waterproof jacket. For the next few miles, the slight incline required just enough effort to keep me warm. Then I reached the bridge where the PCT separates from Deep Creek, and I had to stop for water.

After filling my Vecto, I sheltered behind a thick tree trunk to avoid the worst of the rain being blasted down the gorge. Squeezing cold creek water through an extremely slow Sawyer Mini, I quickly lost all feeling in my fingers. As the numbness spread to my hands, my grip weakened, which slowed things down even more. Next came the increasingly uncontrollable shivering and teeth-chattering. While loudly c-c-cursing the w-w-weather, I eventually finished filtering. Then I shakily refilled the Vecto, packed everything away, and ran.

During the four miles between Deep Creek and Bench Camp, the deluge progressed beyond “torrential” to reach “end of the world” severity. My jacket stopped being waterproof, and I invented several new expletives. Despite managing to pitch my tent in world-record time, it contained several large puddles by the time I’d finished. Fortunately, my sleeping bag stayed dry, and that’s where I hid for the rest of the day.

Putting on the previous day’s wet clothes to begin hiking was unpleasant, but everything improved from there. The skies were clear and conditions frosty, but the wind had stopped and the temperature rebounded rapidly. What a difference a day makes. 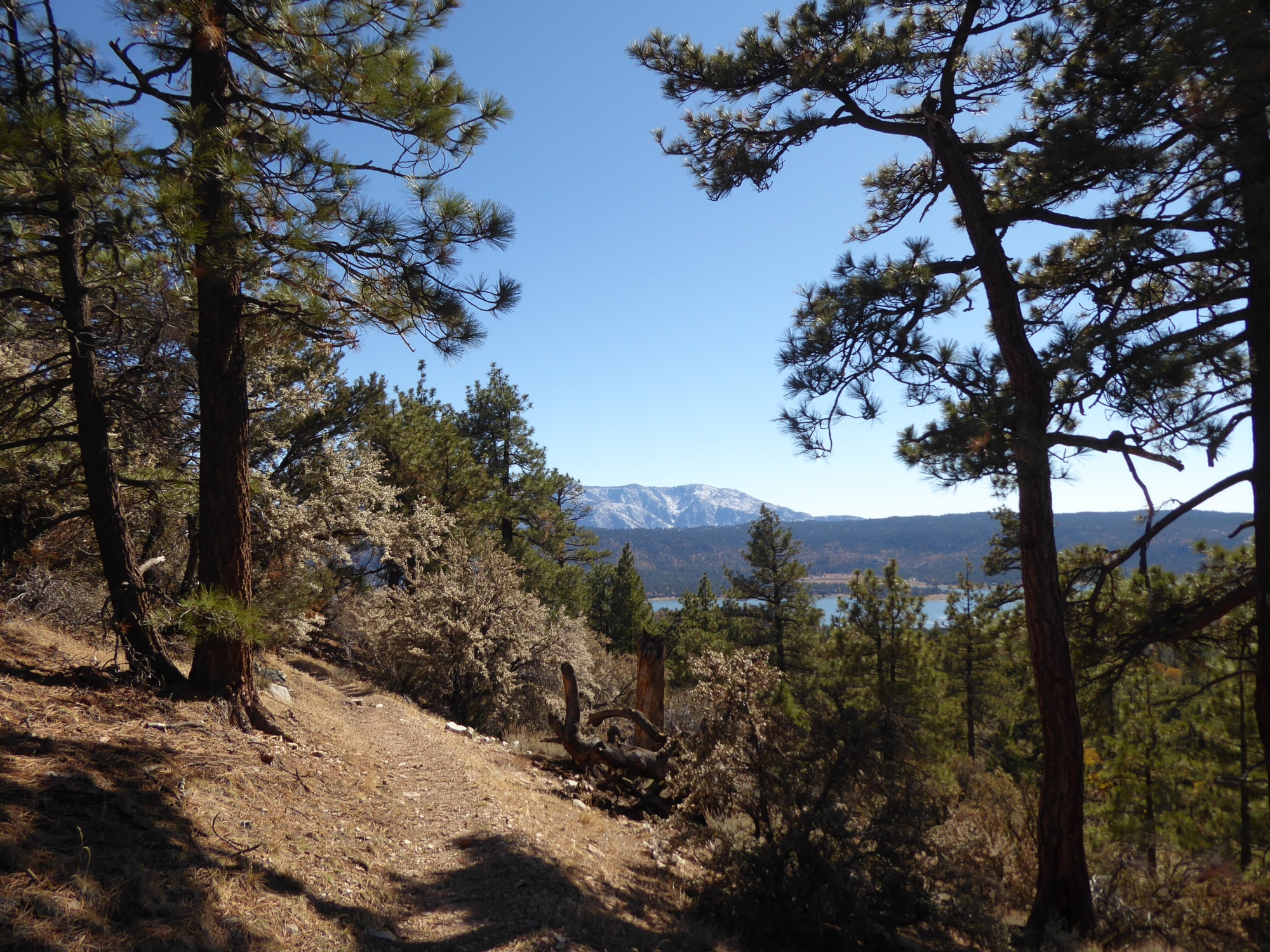 Not far from camp, north of Big Bear Lake.

The next time I saw B&S was at Highway 18, and the three of us took a ride into town. (Thanks for the mini-tour of Big Bear Lake, Jessica!) We stayed at the ITH hostel, which I’m sure was a lot quieter than it would be during NOBO season. Still, the staff made us feel very welcome, and the handful of guests were friendly. One of them, Beth, accompanied B&S and me for dinner that evening. She also gave us a ride back to the trail the next day. (Thanks, Beth!) We didn’t leave the trailhead until 11:30 AM, and I covered 15 miles in order to cut the distance to the base of San Jacinto Peak to about 45 miles.

The day after that was one of contrasts. In the morning, a gorgeous section of high-desert trail: pine trees, juniper, and views as far south as the Salton Sea (almost 60 miles away). In the afternoon: Mission Creek. The creek bed was hot, rough, overgrown, with multiple water crossings and constant route-finding. I only fell once, but lost count of how many times I got hit in the face by branches while concentrating on where I was putting my feet. Judging by the Farout comments, many people find that section frustrating. In a show of solidarity, I left a one-star review.

It was a pleasant surprise to find the Whitewater River river flowing so well (for late October, at least). I stopped for a refill just before the first day-hikers arrived. The valley was starting to heat up, so I soaked my t-shirt and pushed on. By early afternoon, not only was it very warm, but the wind had picked-up too. I paused at the I-10 underpass to enjoy the shade, and cast my mind back to when I was first thinking of hiking the PCT. Back then, I thought that spending a night under a freeway had an almost romantic “Into the Wild” quality to it. In reality, it’s not a place I’d want to sleep, so I kept moving. And besides, I needed water. I also wanted to reach base-camp for the following day’s monumental climb.

Something else I did when planning my thru-hike was examine the PCT’s elevation profile. One climb in particular, from a SOBO perspective, stood out: San Jacinto Peak. It’s obviously the biggest ascent, and it looked like it would be a challenge. And as far as I can tell, it’s not one of the existing PCT challenges. Hence, for your consideration, may I present: Sanjay’s Summit Sunset Challenge.

NOBO elevation profile of the PCT.

The challenge is simple. Starting any time after midnight, from the Falls Creek Road Water Faucet, get to the summit of San Jacinto Peak by sunset the same day. The elevation difference is more than 9000 feet, and it’s a rare opportunity to attempt such a prominent peak.

Despite regular back-flushing, my filter had continued getting slower, so I filtered all my water the night before. The next morning, I woke up just after five and packed as quickly as possible. An hour later, carrying almost as much hydrogen and oxygen as a Saturn V, I blasted off for the stars. At least, in the excitement of the moment, that’s what it felt like. What it looked like was me hiking as fast as I could, in the dark, without stumbling. After about 45 minutes, I put away my flashlight and started picking up speed. Another 45 minutes elapsed, and I rocketed past B&S while they enjoyed a quiet breakfast overlooking San Gorgonio Pass.

Half an hour later, the sun cleared a ridgeline to the east, and the ambient temperature jumped 20 degrees. I started burning through my H2O more quickly, and began to wonder if I was carrying enough. Passing an altitude of 6000 feet, I left the desert scrub behind and entered a landscape of other-worldly trees. The air temperature dropped noticeably and I calculated that my water reserves would actually last. Instead, keeping warm became priority number one. Fuller Ridge was shaded, windy, and quite possibly colder than outer space. I put on all my layers for a lengthy stop at the North Fork of the San Jacinto River. The river was actually just a trickle, but that’s all I needed.

After filtering enough water for camping, and with hands frozen yet again, I moved on. About half a mile later, I left the PCT at the Deer Springs Trail junction. During the final 2.5 (ish) miles, I passed a handful of descending day hikers, and arrived at the summit to find it deserted. I checked my watch – 5:30 PM. Half an hour until sunset. 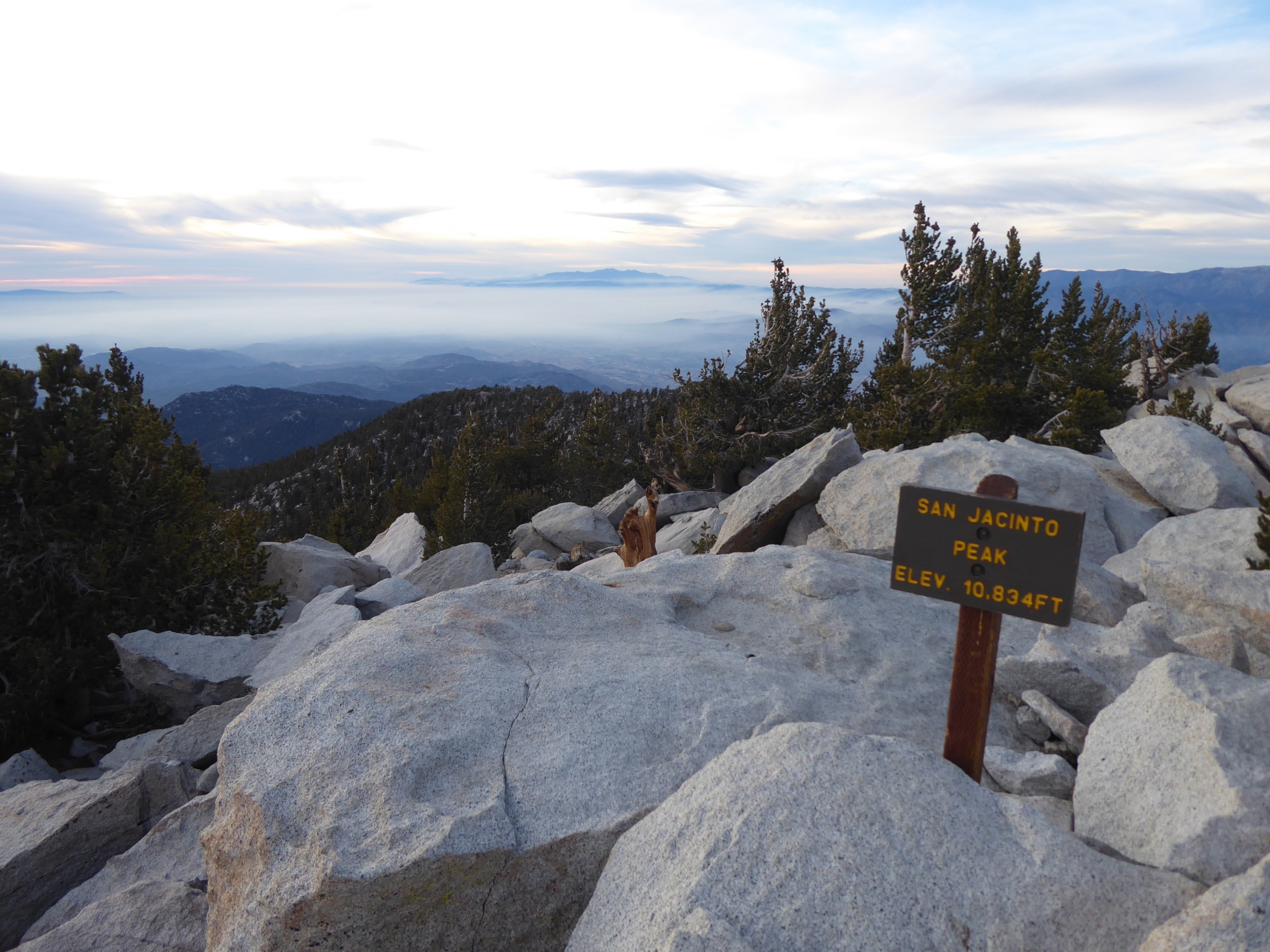 It was cold at the summit.

Dispersed camping isn’t allowed within Mount San Jacinto State Park, and the wilderness campgrounds require permits. There are other restrictions too. I saw an “Emergency use only” notice inside the door of the shelter near the summit. I’m also pretty sure I remember a “No Camping” sign at Saddle Junction, outside the park boundary.