This Is The End, Part One

I hadn’t been waiting at the Humber Park trailhead for long when Bunkhouse and Spud (B&S) arrived. While we were discussing our options for getting to Idyllwild, a trail angel named “Coffee Break” happened to be driving through the parking lot. He told us he was spending the day going around town offering assistance to hikers, but unfortunately, hikers were few and far between. He was enthusiastic about being able to help, and we piled into the back of his car. It’s only a short drive to the center of town, and he dropped us off at the Red Kettle in time for lunch. (Thanks, Coffee Break!)

I spent the rest of the afternoon doing my usual in-town chores. However, I also made time for Mayor Max’s meet-n-greet from the back of a car outside Wooley’s clothing store. He was a good boy. A very good boy. I suspect he’s easily corruptible though, judging by his doggie-treat addiction.

That evening, the Silver Pines Lodge was the closest thing to a SOBO bubble that I experienced on the PCT. There were five other hikers: B&S, Hawaii, Toes, and Pancake (T&P). B&S took a zero the next day, but the rest of us returned to the trail. And we traveled there in style: a pickup truck driven by one of the owners of the Silver Pines Lodge. Despite getting to the trailhead just after nine, I didn’t hike very far. A short distance south of the Spitler Trail junction, there was a ridgeline campsite with views I couldn’t resist. 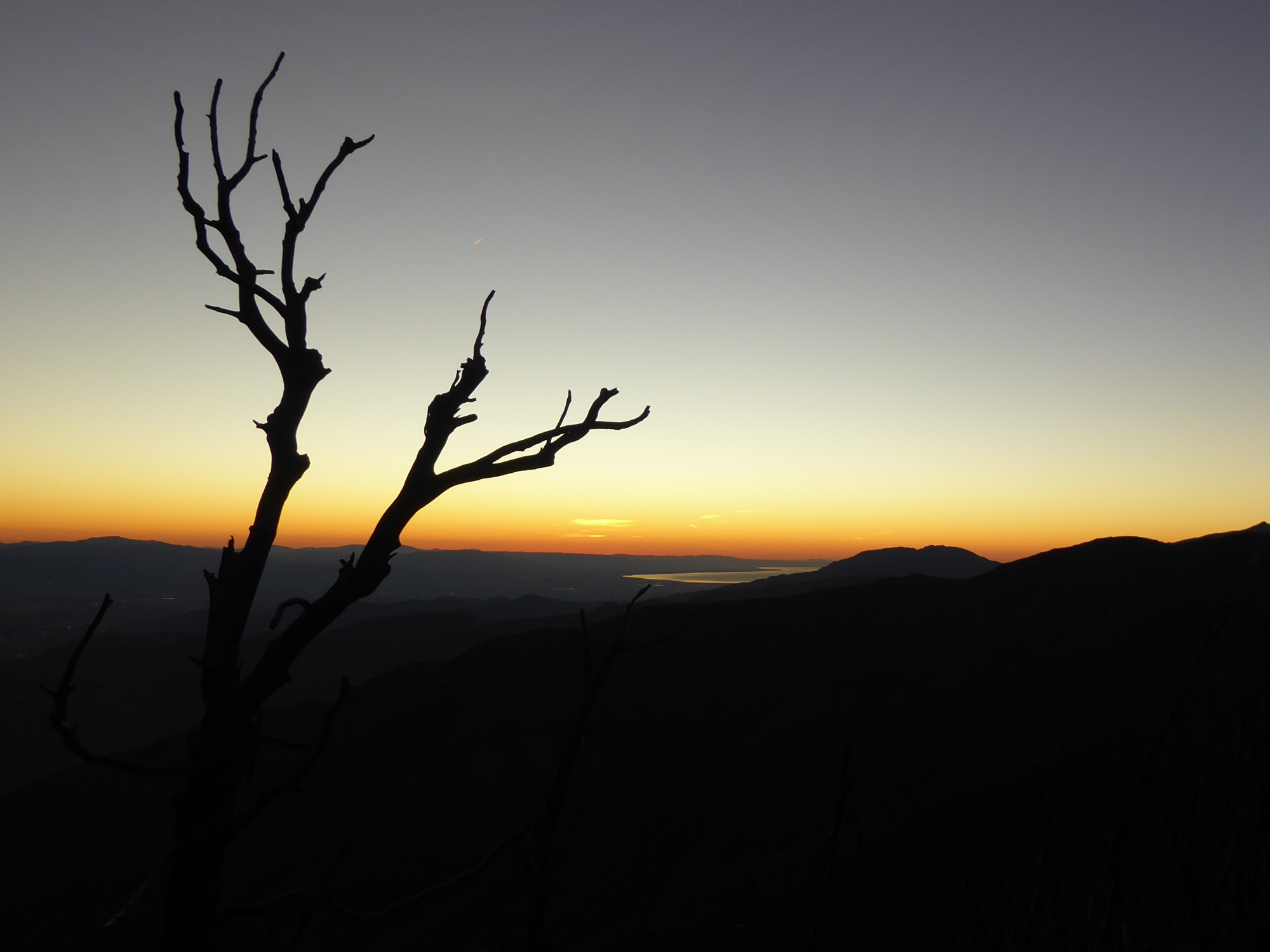 Leaving camp before sunrise over the Salton Sea.

The next morning, I saw something I’d never seen before: a skinny snake in high-speed pursuit of a small lizard. Normally, this would have been the big news of the day. However, mid-morning I caught up with Hawaii, who was stuck behind three escaped and slow-mooving cows. My arrival spooked two of them, and they bolted from the trail up a slight incline. The third cow trotted along the PCT in front of us, pausing occasionally to turn its head and see how far behind we were. This cow had a sturdy pair of sharp horns, the tips of which were about three feet apart. For half a mile, it looked increasingly confused and/or alarmed each time it turned its head in our direction. Eventually, it decided it was too far from the herd.

As we reached a section of trail that was wide enough for the cow to turn around fully, it took the opportunity. And then it started running back towards us. Not a full-on, head-down, bull-like charge, but pretty fast nonetheless. I leapt off the downhill side of the trail and caught hold of a rock. Hawaii followed suit, just a moment before the cow thundered past. Then we clambered back up and dusted ourselves off.

When Hawaii stopped to eat, I kept moving. Highway 74 was within striking distance, and I was driven on by the thought of a late lunch at the Paradise Café. Just before I reached the trailhead, I met a day-hiker (trail name: Billy Goat) who gave me a ride to the café. During the drive, we passed T&P, although there wasn’t enough space in the car. Billy Goat dropped me off and went back for them. (Thanks, Bill!)

T&P soon joined me at the Paradise Café. While rubbing my bruised elbow, I told them about the cow incident. Then, fittingly, I ordered a burger.

Camping a few miles after Highway 74.

The three of us walked as far as my campsite that afternoon, but T&P still had miles to cover, and that was the last time I saw them. I did see a familiar face a few days later though. Just after arriving at Highway 79, I was trying to decide between road-walking to Warner Springs or taking the California Riding and Hiking Trail that parallels the highway. Spud caught up with me and disappeared into the underpass. She was attempting (and would go on to complete) 40 miles that day. I decided to take the road into town. The good news was that my resupply box was waiting for me at the post office. The bad news was that the gas station was closed due to a scheduled power outage. No chance of a chilled Mountain Dew. (Sigh)

The trail to Eagle Rock was busy, and there were a few day-hikers near the Barrel Spring trailhead. Beyond that, the desert was deserted. Just before sunset, Bunkhouse passed my campsite, and we chatted for a few minutes. After he left to catch up with Spud, I didn’t see another person for two days. And with that much time alone, the mind starts to wander.

Day one started with a long, hot, meandering traverse that would eventually lead to Scissors Crossing. Many times, I expected to begin the descent, only to see the trail detour around yet another drainage to yet another promontory. So many pointless lefts and rights. The last time I’d experienced such an abundance of PLRs was the section of trail east of Silverwood Lake. The PCT’s pointless ups and downs receive most of the bad press, and hikers rarely mention the PLRs. The road in the valley below seemed to be taunting me by taking such a direct route south. It seemed like the PCT knew I had less than 100 miles to go, and wanted to delay me as long as possible. Somehow, it managed to extend 10 crow-flying miles to more than 30 trail miles.

On day two, I left camp a little later than usual and finally escaped the San Felipe Valley. I’d only been hiking for about an hour when I noticed something glinting in the early morning sunlight. Whatever it was, the trail was leading me straight towards it. As I approached, I realized it was a shiny, helium-filled mylar balloon. A gold-colored number three, hovering above a creosote bush and pulling gently at its tether in the light breeze. The bush in question was only about 20 feet from the trail, so in the spirit of leave-no-trace, I decided to take “3” with me. Plus it was an easy way to lighten my load. I wondered briefly how many other numbers might be out there. 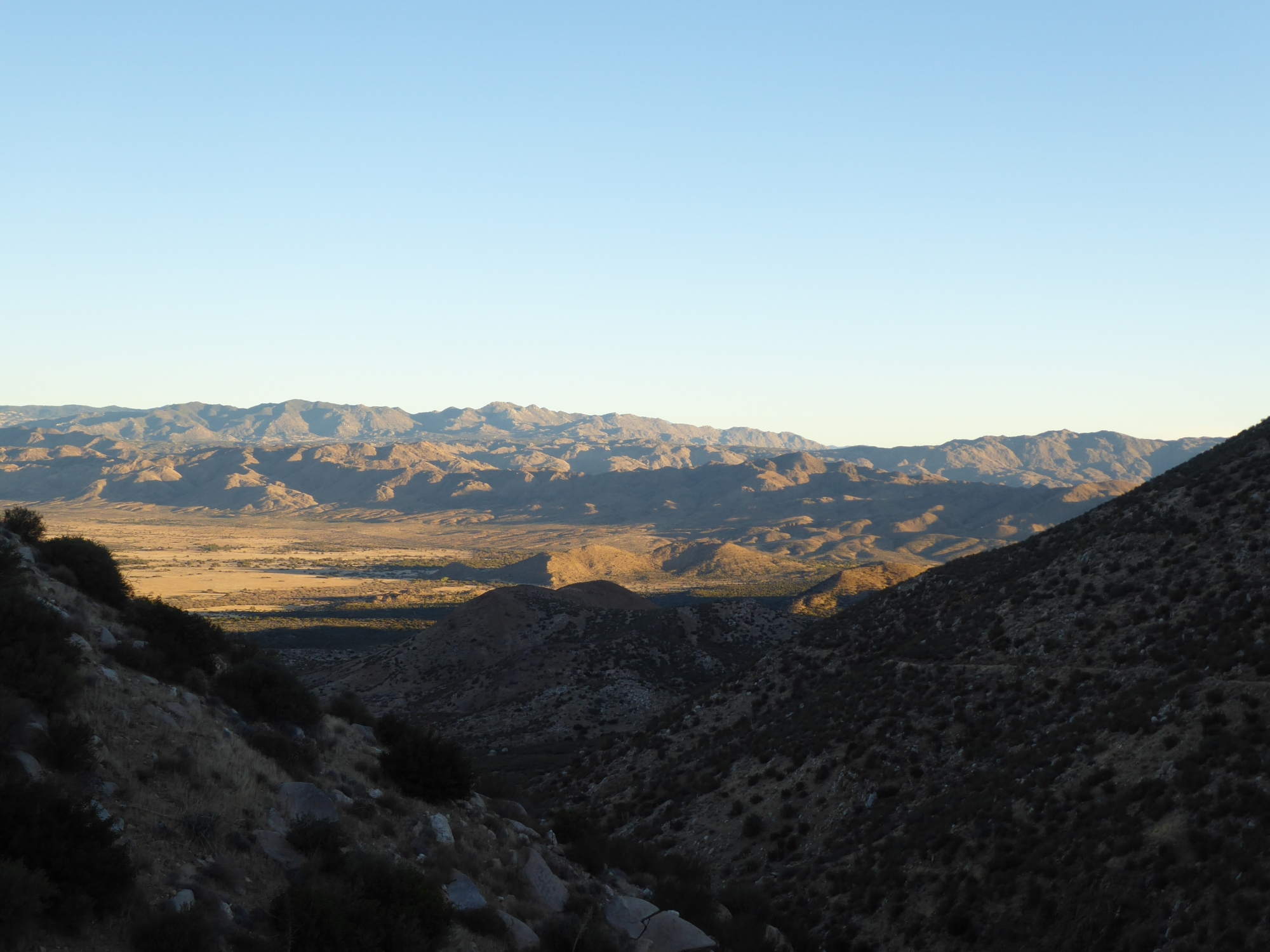 I untangled “3” from the bush, and realized he wasn’t alone. Unfortunately, during their daring escape from the birthday party, “0” hadn’t been so lucky. Although still in one piece, he was badly torn and barely recognizable. I could only imagine the trauma that “3” must have suffered, witnessing the death of a close friend. And yet, “3” maintained a happy-go-lucky outlook, perfectly content to go wherever I might lead him. I noticed he had a small, neatly handwritten word at his foot: “Mathis.”

Mathis waited patiently while I folded “0” down to a manageable size. After I’d slotted “0” into the top pouch of my backpack, Mathis was free to float above my head, securely attached by a length of gold ribbon. Oh, the places we’d go. The admiring glances we’d receive. The passers-by we’d talk to. When we reached Campo, the children would surely stop what they were doing and point. I’m sure they’d seen many a strange hiker over the years, but none like me. None with a three. Maybe I’d arrive at the terminus the same day one of the local kids was celebrating their third birthday. I’d entrust them with Mathis, and he’d brighten their day as he had mine. But perhaps I was getting ahead of myself.

As I continued the climb out of Rodriguez Canyon, Mathis bobbed happily along behind me. Occasionally, he’d become preoccupied with some shrub or tree we passed, and I’d have to pull gently on his line. Sometimes he’d just tug lightly against his ribbon for no apparent reason. Mostly though, he was eager to make progress. He’d nudge me on the back of the head, hinting that he wanted me to run like the wind. With a smile, I’d just keep walking.

I should have kept a closer eye on him. I should have been more careful. What happened next is entirely my fault. Although I did notice the tall yucca ahead, I didn’t give it a wide enough berth. All it took was a small gust at an inopportune moment. There was a muffled pop, and Mathis was no more. I paused for a few seconds to gaze skyward as his noble soul slipped the surly bonds of Earth. I, too, felt deflated. For the last half hour, I’d been the happiest little grown-up on the PCT.