By now, I’d been on the PCT for several weeks, and I was really starting to savor my brief interactions with the real world. I only spent about two hours at Shelter Cove Resort, but in that time, I accomplished a lot. After collecting my resupply box, I simultaneously repacked my bear canister, unclogged my water filter, charged my devices, and chatted with a NOBO. Afterwards, I ate a second breakfast (stack of pancakes, orange juice) and took advantage of the luxurious toilet facilities.

I left Shelter Cove about 10:30 AM, and on a whim, decided to follow the Oregon Skyline alternate. I’d rejoin the PCT at Windigo Pass in about 20 miles, but I intended to camp at Crescent Lake before then. There were no hikers on trail that day, and I wondered if the mysterious Windigo was responsible. It’s possible that spending too much time alone was starting to take its toll. 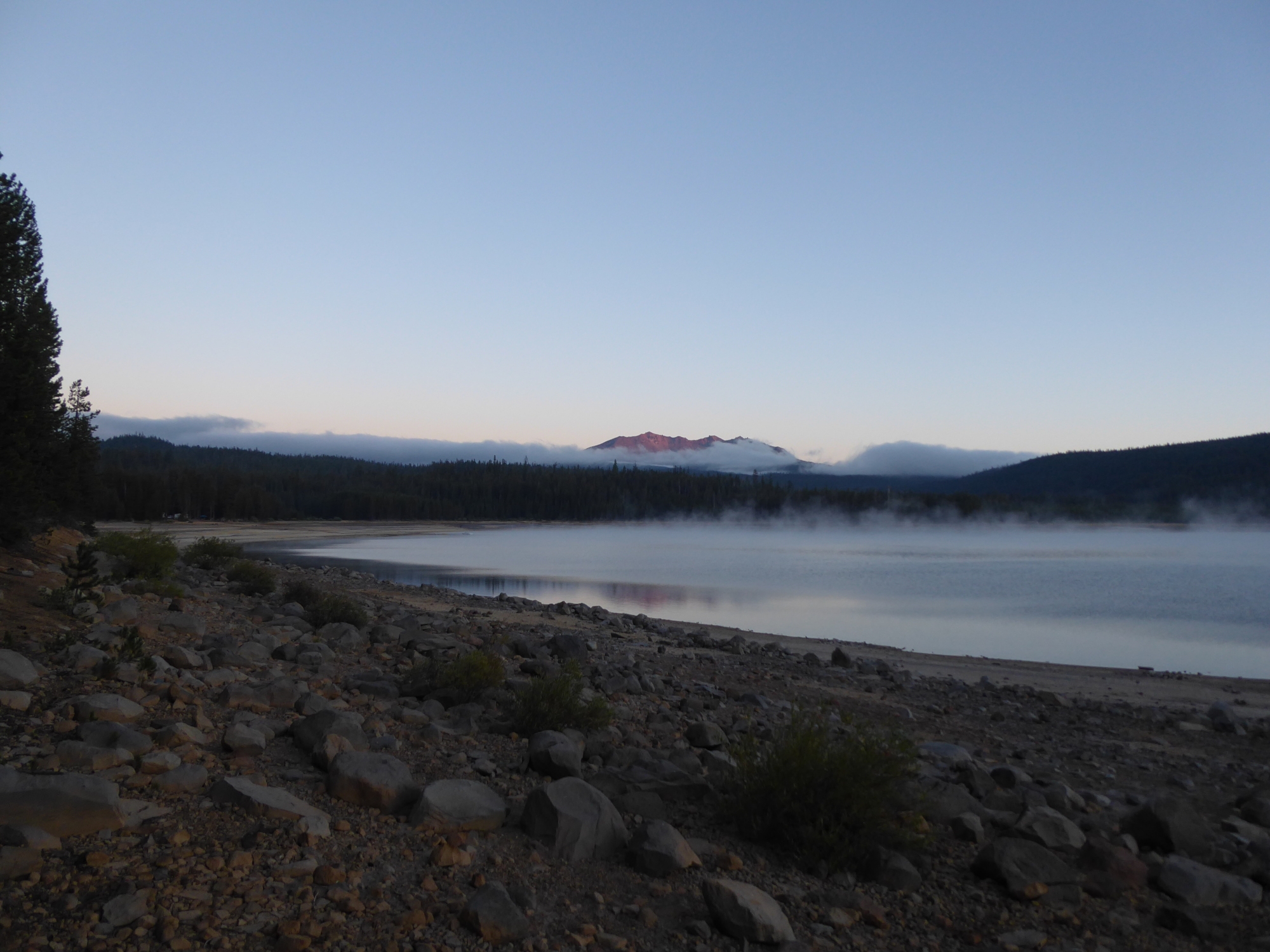 I arrived at the southwest shore of Crescent Lake to find a large, busy campground. I entered via an empty loop that had a barrier across its access road. The loop was apparently only open at weekends, but this was an opportunity I couldn’t resist. My chosen site had a picnic table and faucet, and the closest campers were 500 feet away. After dinner, I sat down at the shoreline to watch fading shafts of light pierce the haze. In the distance were the sounds of people enjoying a warm August evening, their laughter drifting across the lake. To my left, mostly female voices. To my right, mostly male. At hiker midnight, I went to bed pondering how nice it was to be around people again.

At actual midnight, I changed my mind when I was woken by an engine revving and dogs barking. The parties in both directions were still going strong, but I was too tired for them to keep me awake. The next time I woke, it was time to get up. It was also cold, quiet, and an hour until sunrise. Apart from a three-person trail crew at Windigo Pass, I didn’t see (or hear) anyone else for almost two days. The PCT was starting to resemble a party that everyone else had left.

Things perked up again as I neared Crater Lake National Park. Just beyond Thielsen Creek, I met a pair of female section hikers. On the west side of Mount Thielsen, a guy was relaxing at a switchback with a view of Diamond Lake. In response to my “hello”, he twisted his torso in my direction while reclined on a rock. I was distracted from his greeting by the large, brushed-nickel revolver strapped across his chest. During our brief conversation, he mentioned that he was waiting for a group of friends to return from the summit. He’d stayed behind to look after their drinks cache. (And judging by the size of that gun, he was expecting the chipmunks to get feisty.) I still had a few miles left, and he had a fort to hold down, so I continued towards Crater Lake.

At a dirt road about half a mile north of the National Park, there was a trail angel handing out slices of chilled Watermelon. He was living the #VanLife, but this was to be his last day before moving on. He’d seen just a handful of NOBOs in the two days since he’d parked there. I agreed that the trail was now pretty quiet, and had been since the Lionshead Fire closure. We discussed his van conversion while I chomped my way through another thick slice of melon. After wishing him luck, I hiked a short distance to camp. 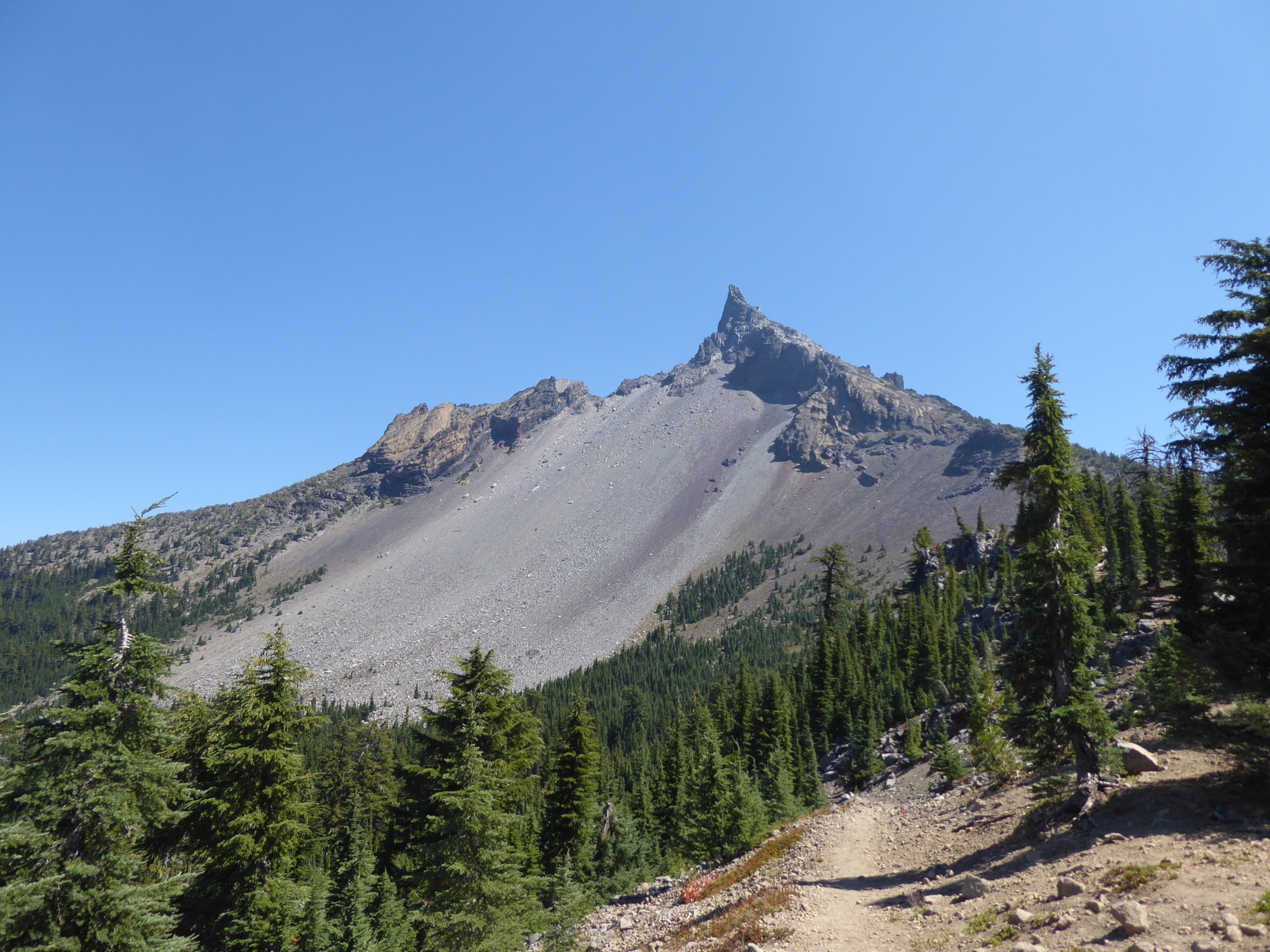 Mount Thielsen, “the lightning rod of the Cascades”.

The last time I was at Crater Lake, thick haze blanketed everything. This time around, I was determined to make the most of my visit. I was up early, took the Crater Lake alternate, and arrived at the rim before ten. It was already a little smoky, and the tourists were out in force. The crowds were concentrated around the trailheads, and some of them did a double-take at the filthy hiker weaving his way through their midst. Between the trailheads, things were quieter. A group of retirement-age backpackers; some fragrant day hikers; an immaculately-presented Instagrammer taking selfies.

At the Rim Village Café, I ate until I was uncomfortably full. Not a huge amount of food, but more than usual, given my strategy for dealing with hiker hunger. (Eating smaller amounts but more frequently.) Nevertheless, I’d created enough room for an ice cream by the time I arrived at Mazama Village. Outside the general store, I started talking to a couple of bike-packers: Jack and Rachel. They looked about as tired as I felt, and they’d accumulated almost as much dirt. When I pointed out the PCT-hiker section of the campground, they decided to stop for the night. We chatted over a few beers, and I reminisced about the days when I had health insurance and could fall off my mountain bike as often as I wanted.

The next morning, before leaving, I raided the hiker box (bear-proof locker). I was still more than two days away from my next resupply, and the hiker box did not disappoint. Plenty of snacks and several packets of crystal meth. Wow! That stuff is a game-changer. Adding just one packet to my water bottle really brightened my day.

Sorry, not crystal meth. Crystal Light. It’s the first time I’ve used it, and I’ve since had trouble returning to plain old water. It’s also a gateway to experimenting with other drink mixes. I’ve developed a taste for “Signature Select” Lemonade and Raspberry Lemonade.

Over the next few days, trail crews continued to outnumber hikers, and the scenery wasn’t very interesting. The huge burned area south of Crater Lake National Park set a low bar for the 30 miles that followed. There were a couple of outstanding views though. 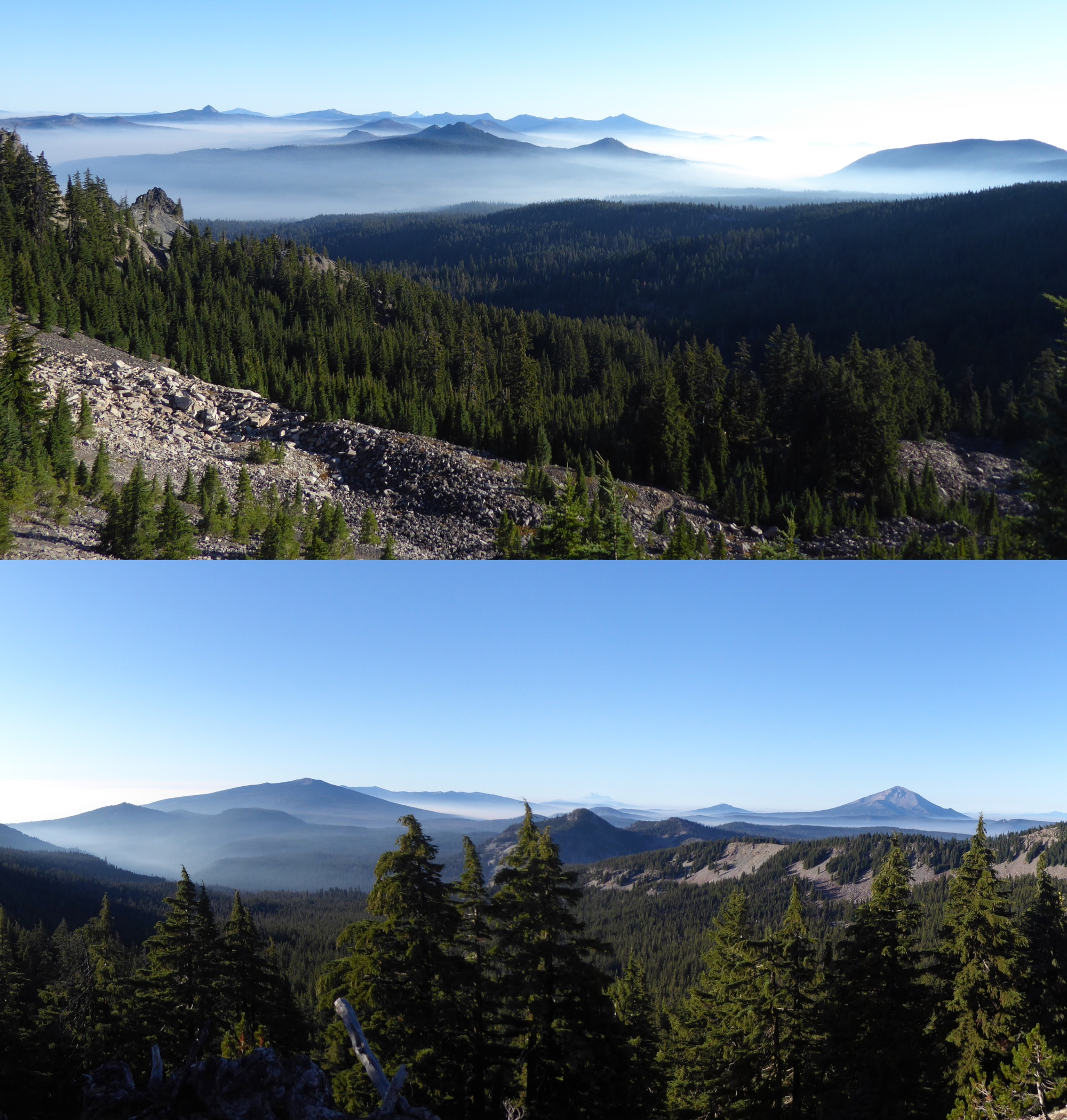 After camping at Squaw Lake, I made my way to Fish Lake Resort and picked up my final Oregon resupply. There was a real end-of-season vibe to the place, and not a hiker in sight. I half expected a tumbleweed to roll through. After I ordered a mushroom/swiss burger, a large group of old ladies arrived for lunch. They really livened up the place, which was just as well, because I was about to get bad news. I sat down with my food, took a bite, plugged in my phone, and checked the PCTA website.

The US Forest Service had closed all of the national forests in California.

Wildfires had effectively already closed the PCT in northern California, and I’d come to terms with that. But now that all of the trail in California was closed, my hike would end in less than three days. The closure order was temporary and would be reviewed in a few weeks. It didn’t seem likely they’d reopen the forests though. Not without a dramatic improvement in the fire conditions, and that wouldn’t happen until the first snows arrived. Either way, I’d have to go home.