The Good, The Bad And The Stinky

For my final three days on the PCT in Oregon, I ate like a king. My resupply at Fish Lake Resort contained six days’ worth of food—enough to get me to Seiad Valley. However, I’d have to leave the trail where it crosses the I-5 south of Ashland. Comfort-eating my extra snacks really helped me process the disappointment. I hadn’t yet fully accepted that the USFS could simply close all of California’s national forests.

After Fish Lake, I rejoined the PCT and soon passed a southbound section hiker. I saw him again the following morning, and we chatted briefly. An hour later, when I heard a noise behind me, I assumed it was the same hiker. I turned around in time to see some sort of animal, something tall, moving away through the trees. I didn’t think anything of it at the time, but the sighting obviously planted a seed somewhere in the back of my mind. Over the course of the next hour or two, I couldn’t help but notice unfamiliar animal calls and knocking sounds. And for the second time in a week, I started to suspect that I was spending too much time alone.

By early afternoon, I was close to completing my miles for the day when I passed Asperkaha Campground. I decided to check it out.

I walked downhill into the campground and immediately noticed how quiet it was. Odd, I thought, given that it was the Thursday before Labor Day. The only sign of life was a fifth-wheel RV up on the hill, which I assumed was where the campground host stayed. While I was still trying to decipher the campground map, a golf cart pulled up behind me. I turned around to see that the cart was occupied by two old white guys with a pair of medium-sized brown dogs running alongside. I immediately focused on the dogs, trying to gauge their temperament.

The driver spoke first: “They don’t bite. Much.”

I studied him for a moment to see if he was joking. Not a hint of humor—only hostility. Odd behavior, I thought, for a campground host. I looked back at the dogs, who were obviously wary, but not at all aggressive. In fact, they could barely contain their curiosity. No doubt because they’d picked up the scent of someone who hadn’t showered in weeks. An odor wafting downwind from the dirt-encrusted stranger. The younger of the two dogs, although almost fully grown, still had the fluffy coat of a puppy. He was the first to come forward and investigate, and his nose went straight to my crotch. With the ice broken, the older dog trotted around behind me and sniffed at my heels. Then he sniffled his way up the backs of my legs and decided that my shorts were where the real action was.

Never Heard of It

I looked again at the driver of the golf cart. “Are you the campground host?”

He replied with undisguised contempt, “No.”

“Do you know where I can find them?”

“No. But it doesn’t matter, because I paid a lot of money to rent this entire place for the weekend.”

Now I understood. He’d booked all the sites, and as far as he was concerned, I was trespassing. Still, I thought there might be an open site, somewhere. I started to explain that I was hiking the PCT, but he immediately interrupted.

I repeated myself, slightly louder this time, “The PCT.”

He was visibly exasperated. “What??”

Maybe my accent was the problem. I spoke more slowly, “The P.C.T.”

Now he was really getting annoyed, “WHAT???”

He allowed me to continue. I told them the PCT passed nearby, and my target for today was less than a mile ahead. Howard Prairie Lake seemed like a nice place to stop, so I thought I’d come and investigate. I mentioned that I also needed water. The passenger in the golf cart seemed to realize that there was no need to be inhospitable. He turned to the driver and spoke for the first time.

“Well, some of them aren’t arriving until tomorrow. There’s a few spaces.”

But it was too late. Even if he hadn’t actually reserved all the sites, the guy in the driver’s seat wouldn’t back down now. He pointed at the faucet behind me in case I hadn’t noticed it.

While I filled up, the dogs lost interest and started nosing around elsewhere. The old guys got out of their cart and went to the restroom. Meanwhile, I came to a decision. If the campground was about to host a noisy family reunion, empty sites or not, I wasn’t going to hang around.

Statler and Waldorf reemerged, got back in the golf cart, and returned to their campsite. Mister Sniffles and Sniffs Jr. scampered along behind them.

Nobody ever said I couldn’t give trail names to non-hikers.

The incident reminded me that I would soon be reentering society. Everyone else I’d met in the past six weeks had been friendly, and I’d started to take that for granted. Early next morning, I spooked a group of deer, and a few minutes later I met the hunter who’d been stalking them. He was gracious and showed no sign of frustration. That afternoon, I crossed Highway 66 and met a pair of cheerful day hikers. Maybe the real world wouldn’t be so bad after all.

My last day on trail, I woke up at the same time as usual. I’d stopped using my alarm weeks ago, and I was now purely a creature of habit. It was cold and dark, and I knew I’d arrive at Callahan’s way too early to check in. But my routine had brought me this far, and it was difficult to resist. I unzipped my warm sleeping bag for the last time and started preparing for departure.

Ten miles later, I arrived at Old Highway 99. I turned right and started my brief road walk. As I passed the trailhead for the southbound PCT, I paused for a moment, almost giving in to temptation. However, the official USFS notice stapled to the noticeboard was unequivocal: CLOSED. I sighed and continued along the road. 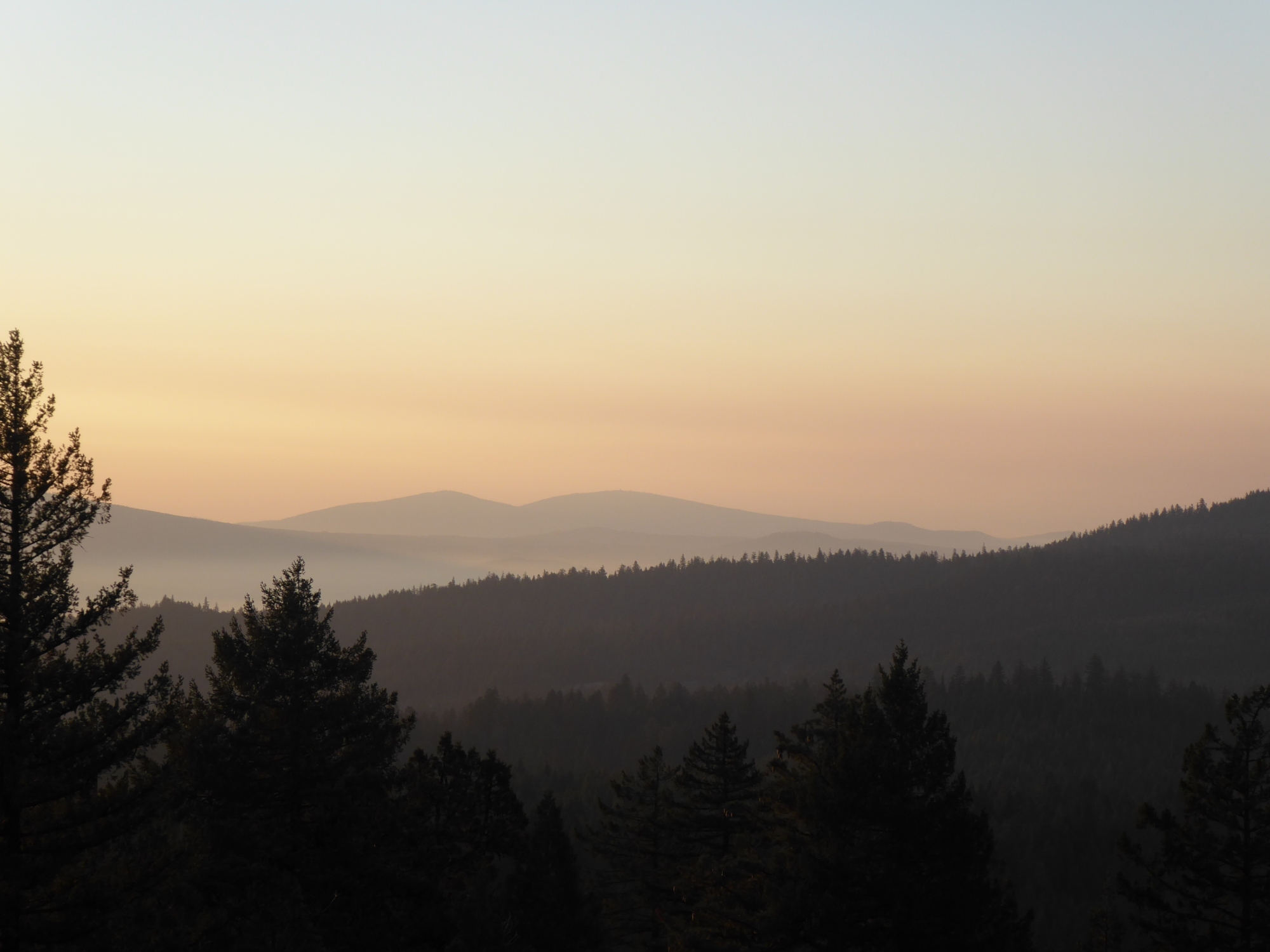 The receptionist at Callahan’s was very accommodating. Even though it was early, she found me a room and checked me in. I spent two nights there while my body clock began adjusting to its new time zone. When I left on Monday, the hotel was quiet, and the road outside even quieter. I briefly considered calling one of the trail angels from the list at reception, but couldn’t bring myself to interrupt their Labor Day. The same receptionist offered me a ride to Ashland if I hadn’t found one by the end of her shift. I thanked her, then went outside to request an Uber.

Not for the first time, Uber told me there were no cars available. Fine. I needed the exercise anyway. After six miles, I hitched a ride with Tristan, who dropped me at a grocery store in the center of town. After lunch, I took an Uber to the Greyhound terminal in Medford and booked a ticket on the 2:45 a.m. bus. Downtown was populated by homeless people, everyone on the move, and all heading for a different destination. I sat down with a beer outside the Common Block Brewing Company for an afternoon of watching the world go by.

I left the bar in time to catch the late showing of the latest superhero movie—a good way to waste some more time. After sitting through the end credits, I found a bench outside the movie theater. (Preferable to downtown at one a.m.) Before long, a security guard arrived, driving a tiny three-wheeled vehicle with a flashing light on top. As he politely asked me to move along, I began to understand where all the homeless people were going. I started walking.