Day 100, 6/5: Southfields, NY -> William Brien shelter (14.6 miles)
100 days on trail! Being in triple digits feels incredible. We packed up from the hotel and I ate my leftover Chinese for breakfast. I was still hungry so Rash and I made oatmeal and I ate some of my snacks. We headed out around 9:30 and walked the steep descent to the main road.

We figured it was easy hitching into the last town, this shouldn’t be hard. We had our thumbs out for 10 minutes when a cop pulled in and told us hitchhiking was illegal in New York. I forgot that looking at the map last night, right across the street from the hotel was the police station, hidden behind the post office. Not our smartest move. We apologized, and he asked us how far we were going. We said 3.5 miles to the trailhead, and I half expected him to offer us a ride, but he didn’t. We crossed the street to the gas station and found a taxi parked who agreed to drive us for $10. I figured that was probably cheaper than the fine we’d get for trying to hitchhike in front of the cop again. 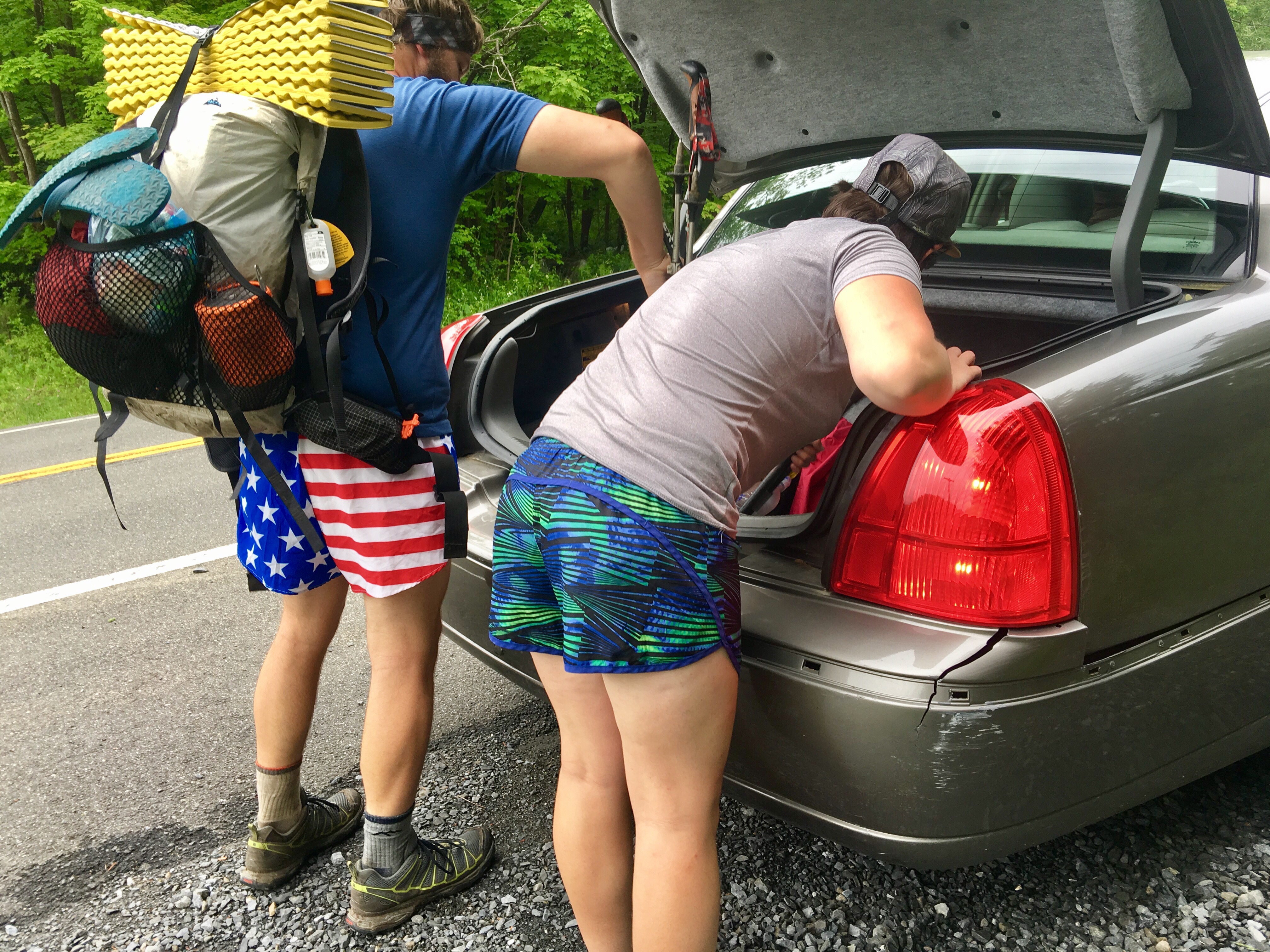 Getting our stuff out of the taxi

The taxi driver was in the area to play the lotto at the gas station, which happens to be his lucky gas station since the address is his birthday (1011). He was animated and I enjoyed his stories during the short trip. We got back on the trail and immediately ran into rocks. That was unfortunately the theme for today. It wasn’t as bad as Pennsylvania, but it came close. The morning went by at a snail’s pace, and we took lots of breaks. 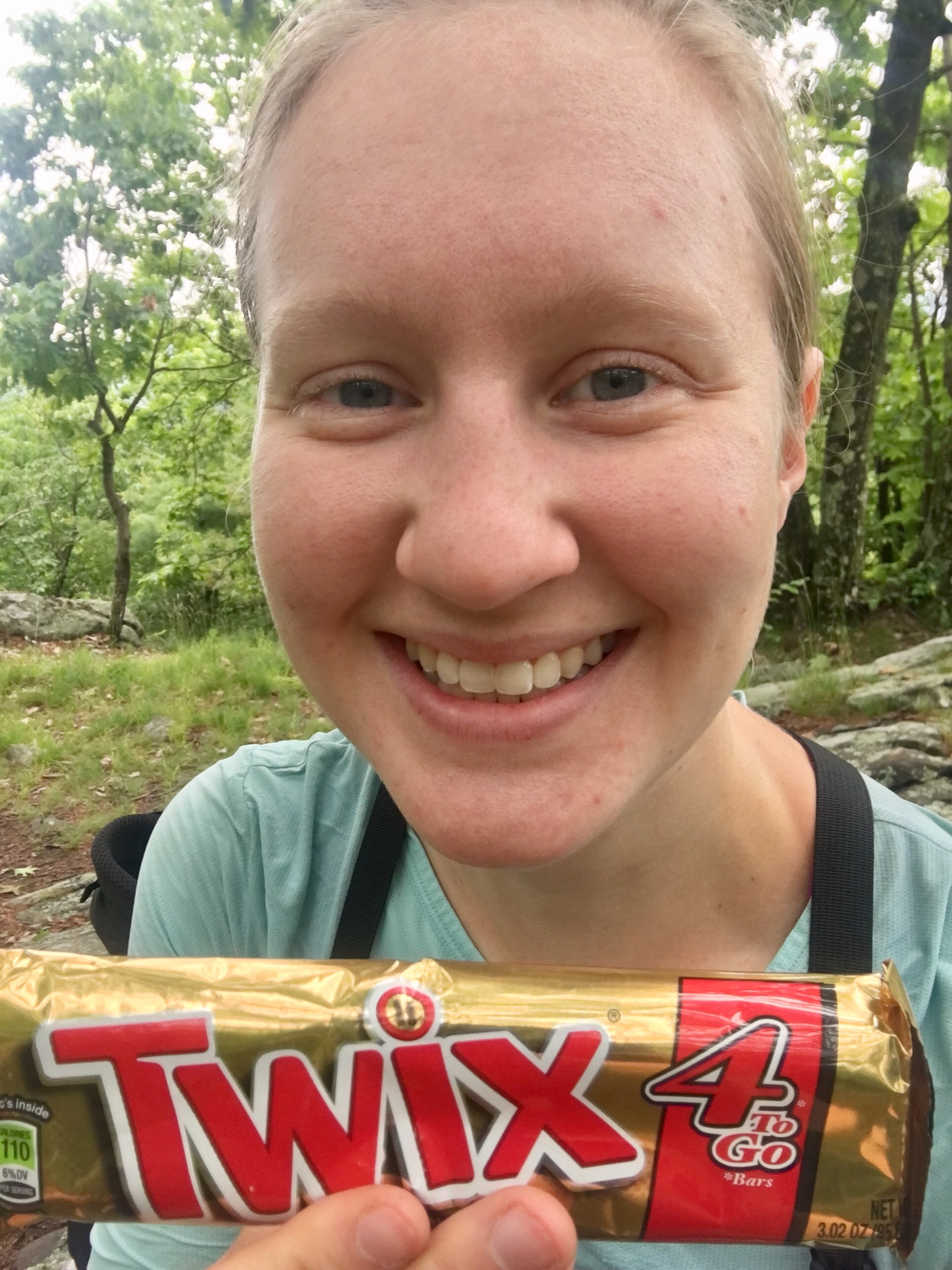 Every road crossing had water jugs stashed for hikers, because the water supplies aren’t reliable and the streams in NY have a weird tint and taste. We topped off at every opportunity. There was quite a bit of hand over hand rock climbing today, which wasn’t fun with the wet rocks. I fell on my butt twice, but thankfully no serious falls. 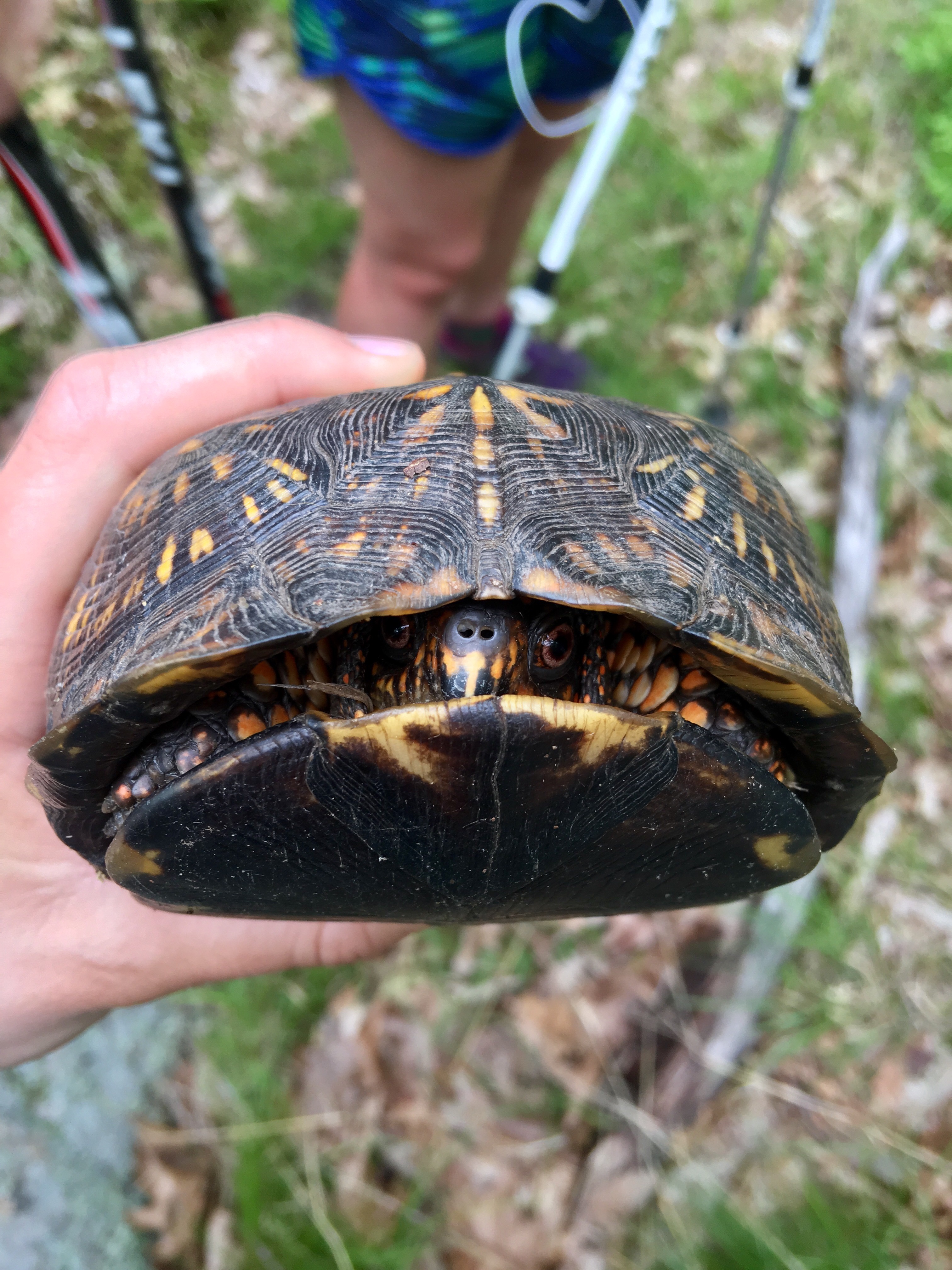 A box turtle we found near the trail

I came to a cave the AT went through, which I thought was cool but weird, and then the trail turned and went through a tiny alleyway made from rocks. I realized after getting almost stuck that this must be the lemon squeezer. I managed to squeeze through, but just barely. Rash and Piñata came through and another hiker we were hiking with managed to do a gymnastic move and climb the walls with his legs and arms and hoist himself up. 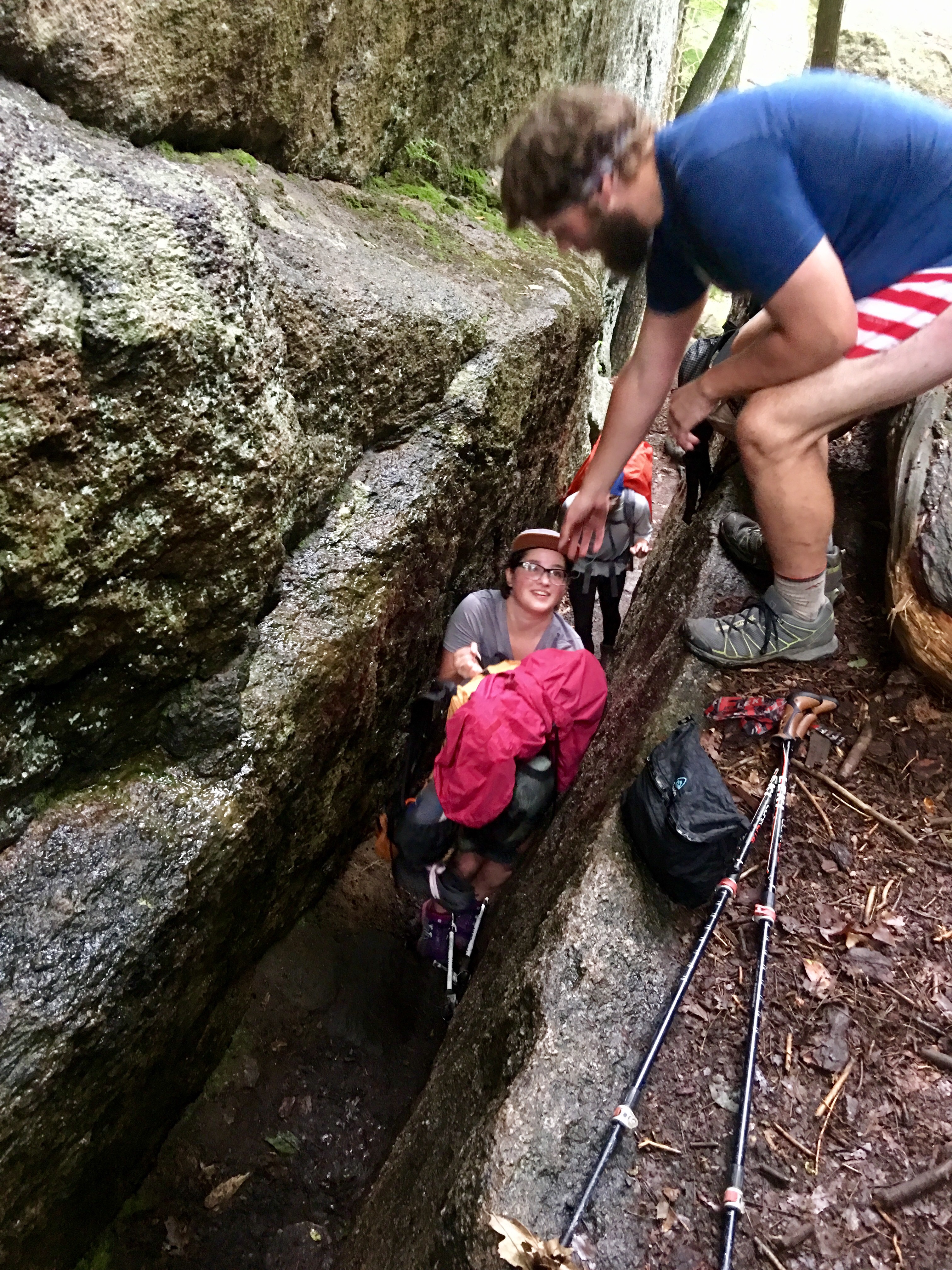 Rash and Piñata in the lemon squeezer

I hiked ahead of Rash and Piñata, and the last 6 miles to the shelter went by quickly. My feet were killing me and I wanted to be done with today. The forecast thankfully was calling for no rain until 8pm, but I felt a few sprinkles and didn’t want to be caught in a downpour. Darwin and Legs were tenting near the water, and there was a female LASHer along with a couple thru hikers I hadn’t met before. The LASHer had her tent set up in the shelter, but took it down since we arrived, even though we weren’t planning on staying in the shelter.

The water source was a well where water pooled. I didn’t bring my scoop, so lying flat on my stomach, I used my hand to scoop water. It took a while but I got what I needed. I ate mac and cheese on a log outside the shelter because there was no picnic table. Rash and Piñata joined me and then we turned in our hammock just as the rain started.

It rained on and off all night. My tarp was hung high and staked far out so I’d have room underneath, but that meant rain could get under the tarp and made everything damp. It wasn’t raining when I got up, but the drops from the trees were enough to make it feel like rain. I made breakfast in the shelter and realized I hated the new oatmeal I got (apple and cinnamon with different grains). 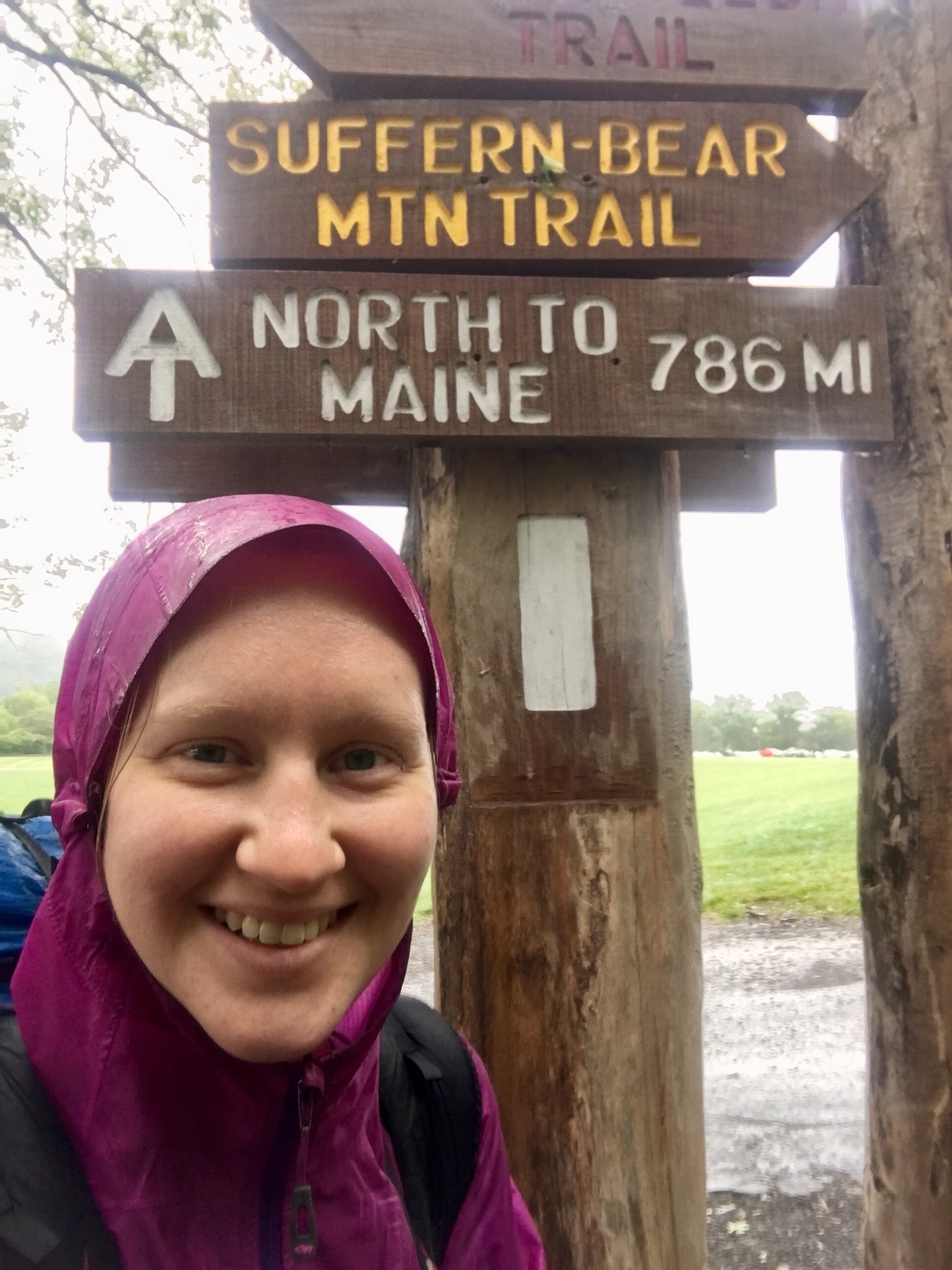 The trail was wet and the rocks were slippery, like yesterday. I was leading and Rash and Piñata were bringing up the rear. We were on the trail by 8, and only took 2 short breaks, so we made it to the zoo around 1. There was a group of loud middle schoolers milling around everywhere, and the noise was awful. In normal life it would have been annoying, but now the stimulus of kids screaming was almost unbearable. 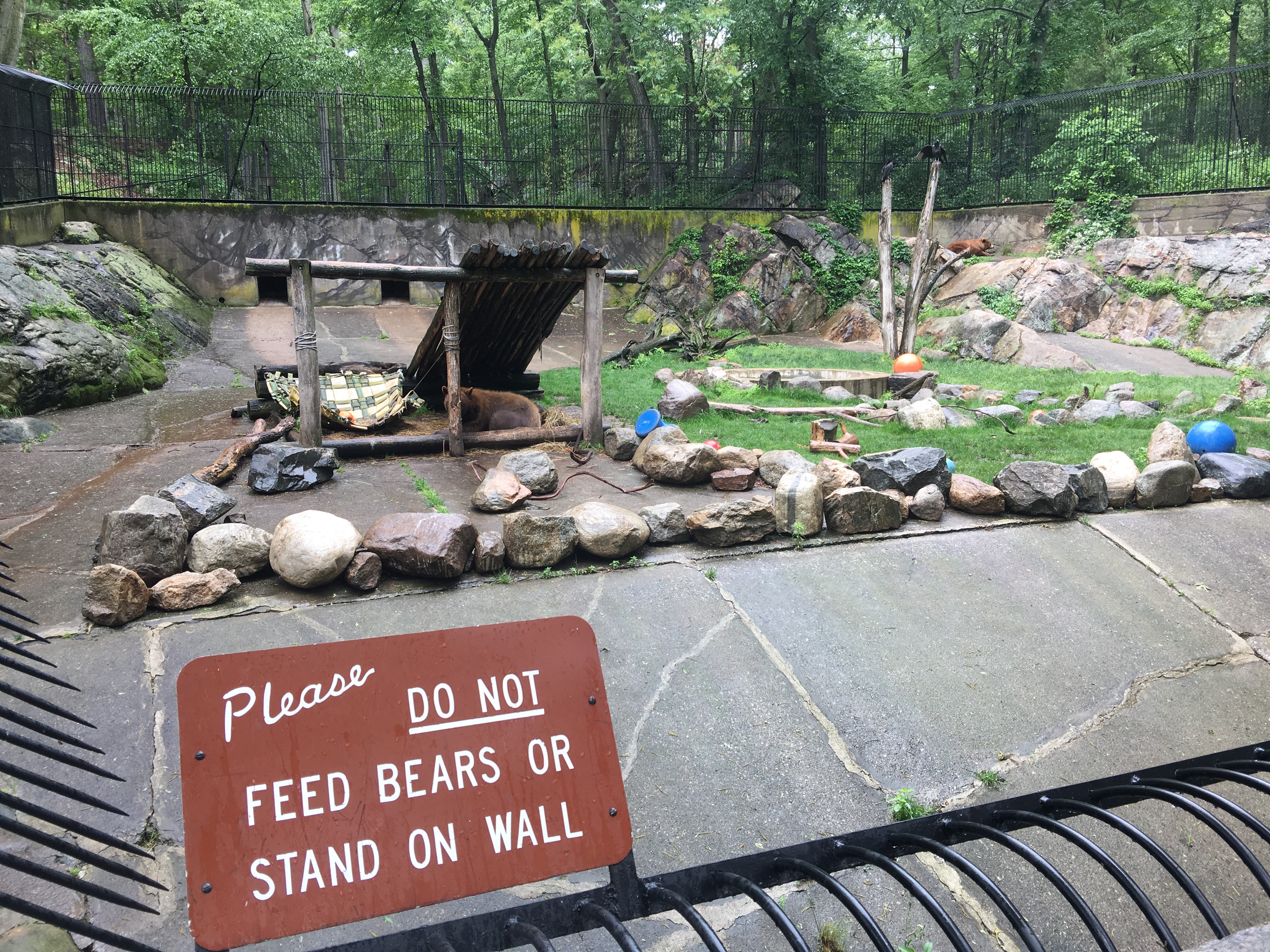 Bear enclosure. This is the official lowest point on the AT.

We saw coyotes, an adorable owl named Toasty being given a health exam by a zookeeper, a bald eagle, and turkeys that couldn’t stop gobbling. We stopped for lunch outside the zoo, and watched the cars cross the bridge. After lunch, we crossed the bridge ourselves, and headed back to the woods.

The rain stopped but it continued to stay cold. I hiked with my rain jacket for warmth most of the day. We crossed lots of small bridges, and then came to a deli and gas station right on trail! It was a wonderful find because we were starving, and real food tastes much better than hiker food. 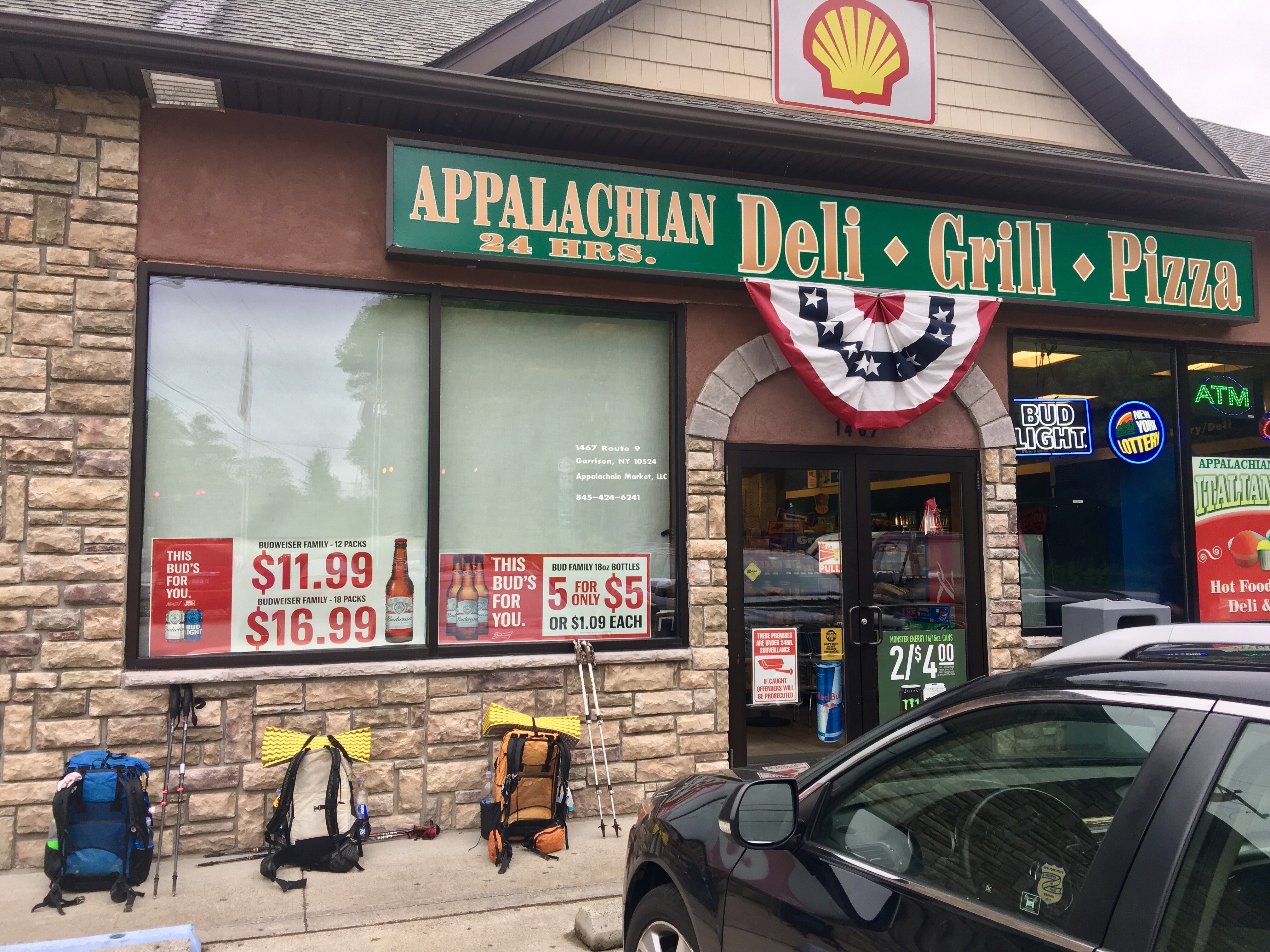 Deli with our packs

I got a slice of pizza and a strawberry shortcake ice cream I’d been craving for a while. We headed out to try and do 5 miles before sunset. I had one fall stepping on a slippery root, and landed straight on my pack. It felt like I landed on a giant marshmallow, and didn’t hurt at all. We got water and were eaten by mosquitoes, so we moved on a little bit to set up camp.

We woke up at the campsite and slowly made breakfast and packed up. I talked over the plan for the next few days with Rash and Piñata. We got on trail later than I would have liked since we had ~20 miles to do. We didn’t take many breaks, and the morning went by quickly. It was cold when we got up but warmed up as the sun came out, so we stopped and shed some layers. 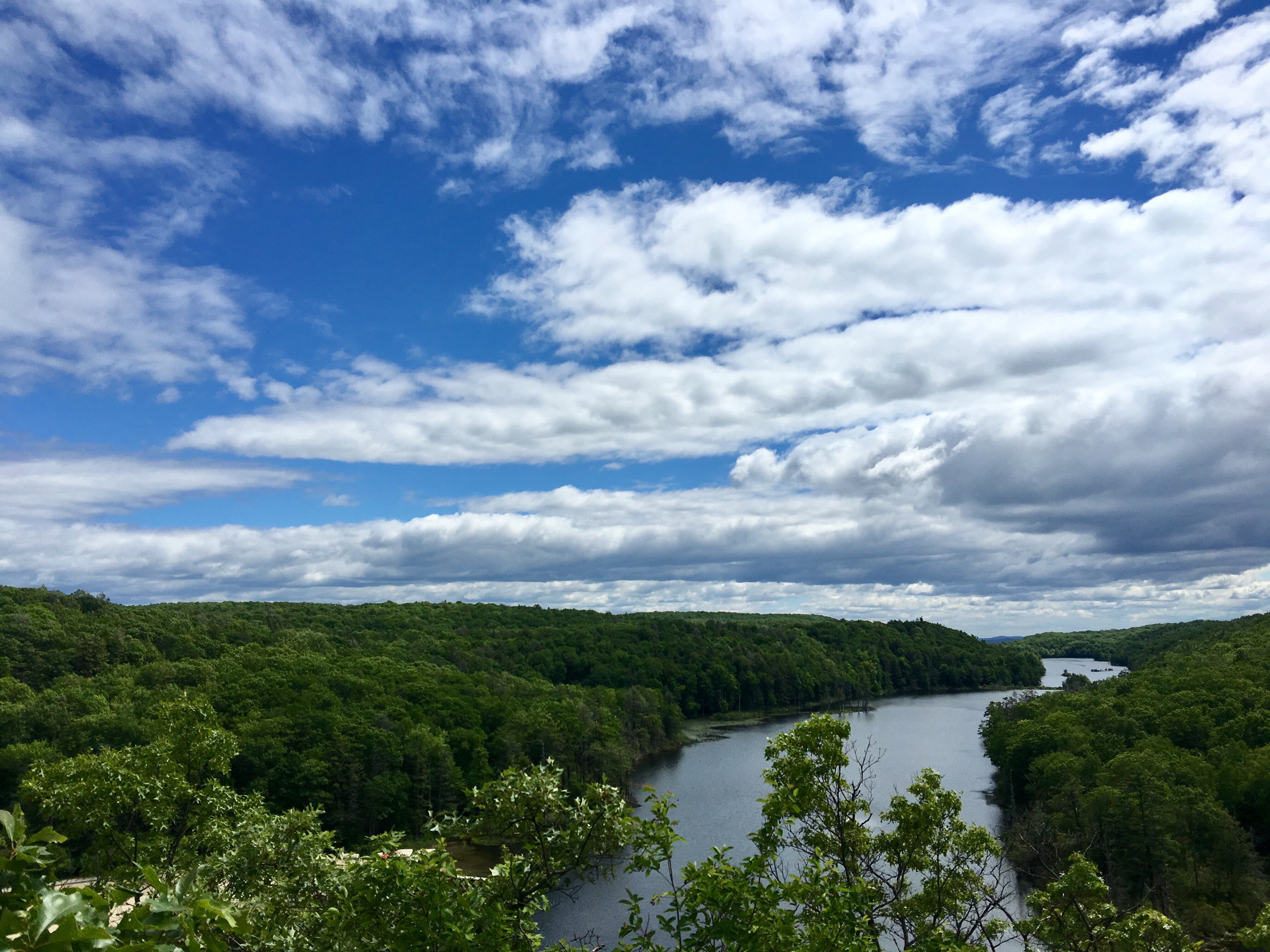 Nice view of the river

As we were hiking, Honey Badger passed us. I last saw him at Pine Grove when he was with Motta. We stopped for a snack and Antman stopped to chat. We hiked on and Lioness passed us. It was nice to see familiar faces around.

We stopped for lunch near a stream with discolored water. A lot of the streams in NY have reddish water, and the coloration persists even after filtering. It tastes normal, thankfully. We kept a sharp timeline for lunch and got on the trail again by 2pm. We met Stashe and Winter along the way, and passed them at a stream.

We made it to the RPH shelter, which was an enclosed shelter but a wall was removed. Honey Badger and 3 other people were hanging out. I filled up at the neat spigot pump, and I gave away my apple cinnamon great grains oatmeal I didn’t like to another hiker. We hurried onto tackle the 2 mountains we had left before the deli. 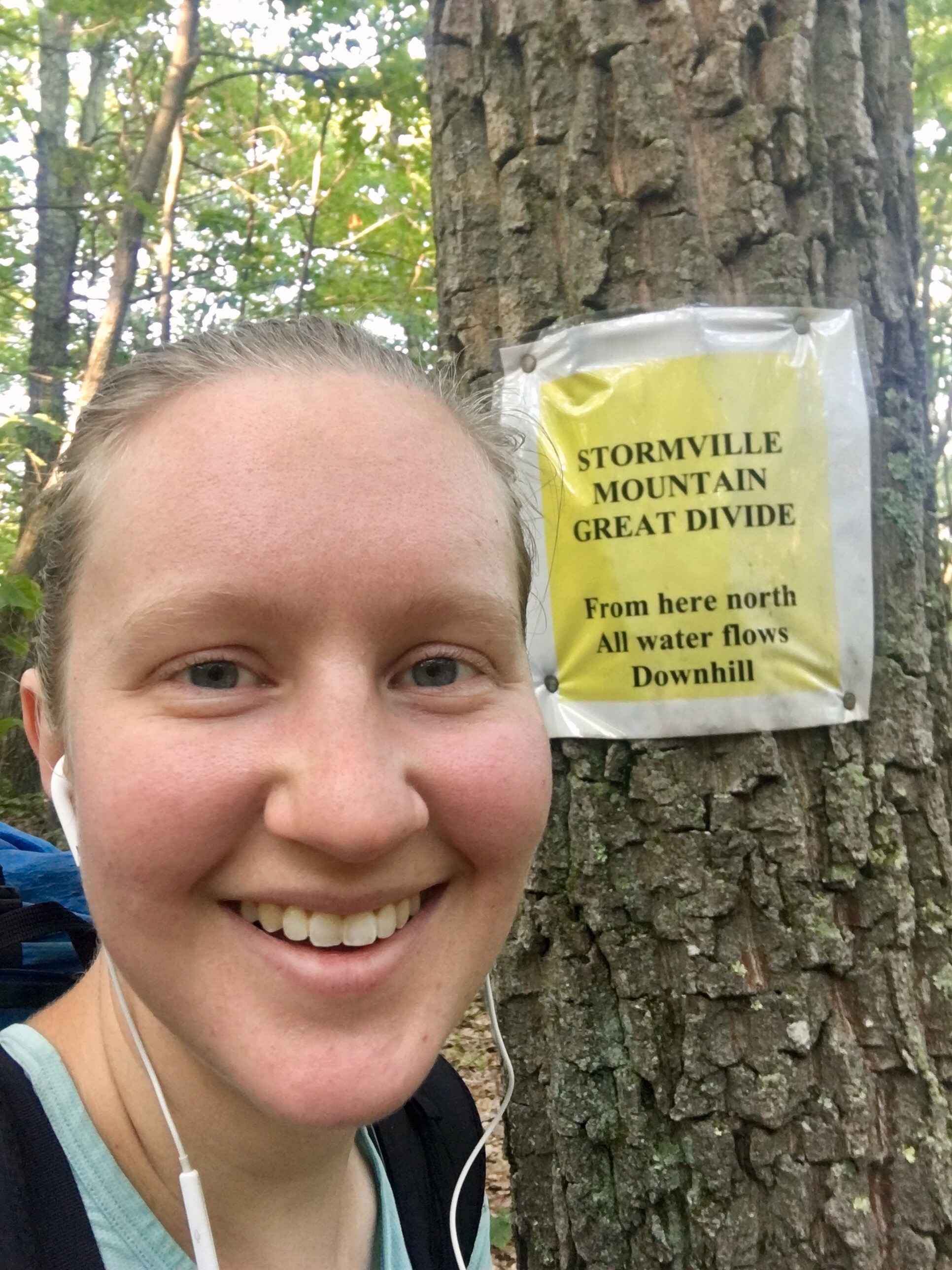 The last 5 miles after the shelter were rough. It was ridiculously steep, and Rash, Piñata, and I were exhausted and hurting. We somehow made it over and down the first mountain, and Piñata said her feet were hurting. I had to stop to sit on a log for a couple minutes and eat a snickers before tackling the second mountain.

We were barely going to make it before the deli and pizzeria closed. Our projected time was 7:30pm, and they both closed at 8:00pm. It was also 0.4 miles off trail, so we were rushing. Walking down the road to the store, I noticed Piñata was lagging. We got to the shop, ordered a large cheese pizza to share, and I got a chocolate milk. We sat at the picnic table behind the building to eat the food, and Piñata took her shoes off. She had half dollar sized wound on the bottoms of her feet which looked like they hurt.

We finished the pizza, and I went down the road to the camping area to set up my hammock. I went back to the deli to switch places with Rash to supervise our electronics charging, and had a nice conversation with Louis.