I’ve been struggling a bit lately. This last stretch had a lot of challenges and, unfortunately, a small injury that I’m working on bouncing back from.

After leaving Pennsylvania I entered gorgeous New Jersey. Does everybody know how gorgeous New Jersey is? Am I the only one that has been in the dark about its beauty? I loved hiking through this state and could see myself hiking that section again sometime. I stayed at the “secret” shelter with a donkey to keep me company. I also took a blue blaze to hike to the highest point in New Jersey. The roughly 70 miles in New Jersey went by too fast. 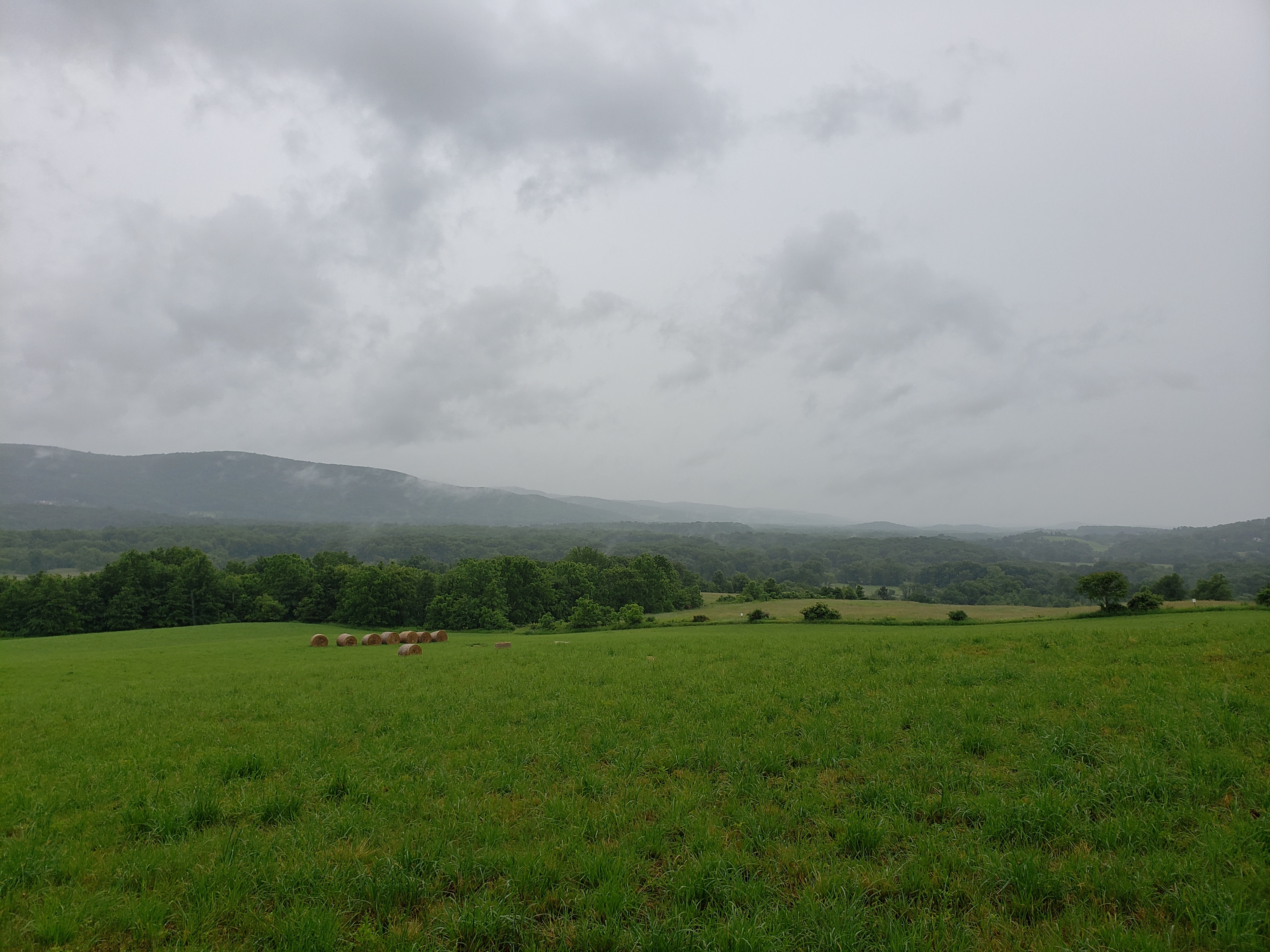 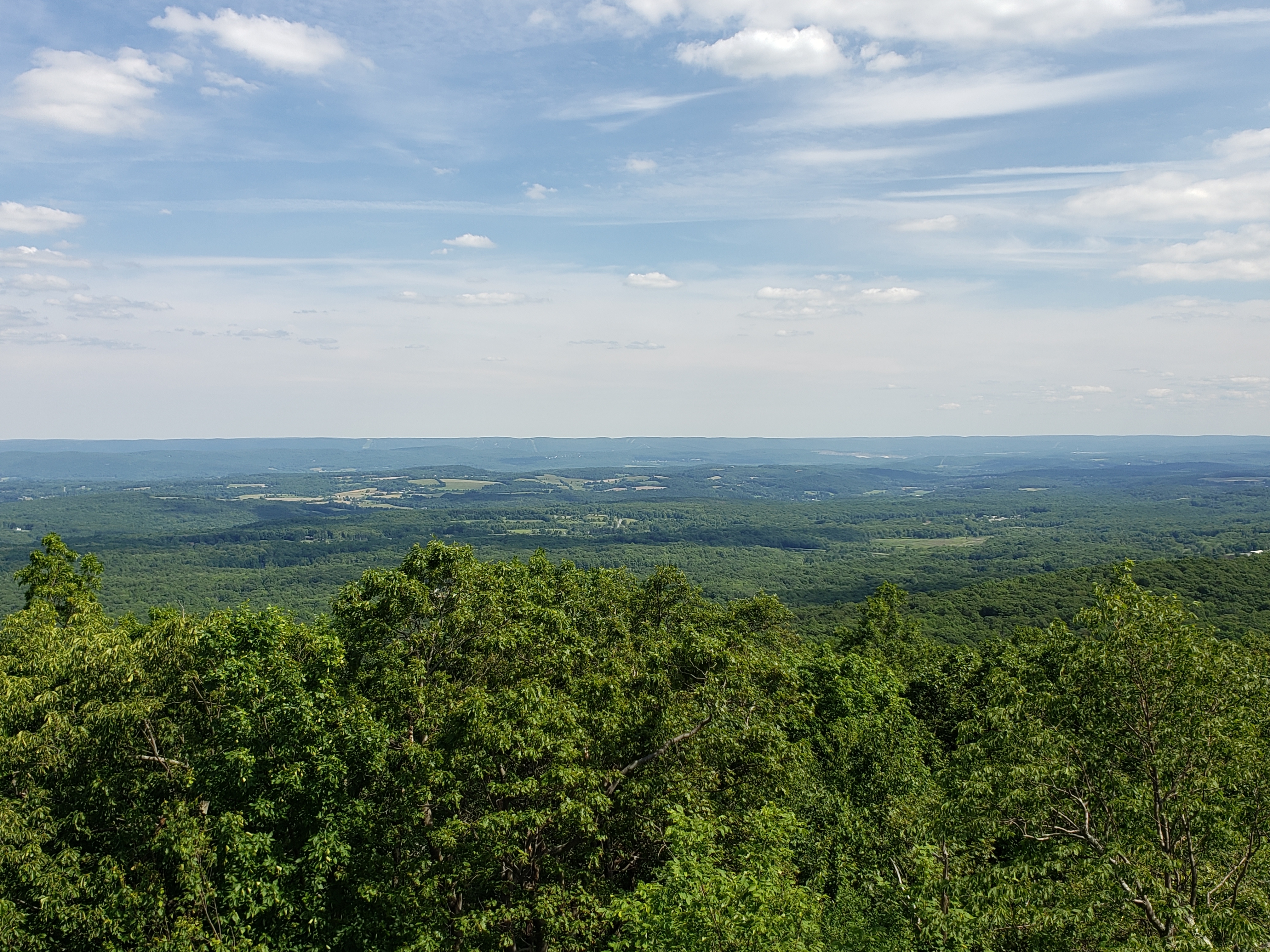 My last day in New Jersey ended up being a long one. I hit the camping spot that was on my radar as a possible spot for that night and it was still early so I kept going. I was tantalizingly close to the New York state line and I wanted to cross. Little did I know that basically the second I crossed into New York it was going to be like getting hit in the face with a bag of bricks. Or rocks. That I’m meant to climb. I hiked to the first shelter in New York and it was the longest eight miles. Every climb involved rock scrambling. It was challenging and slow going because it had rained for the first half of the day and the rocks were slick. I made it to camp just before dark. 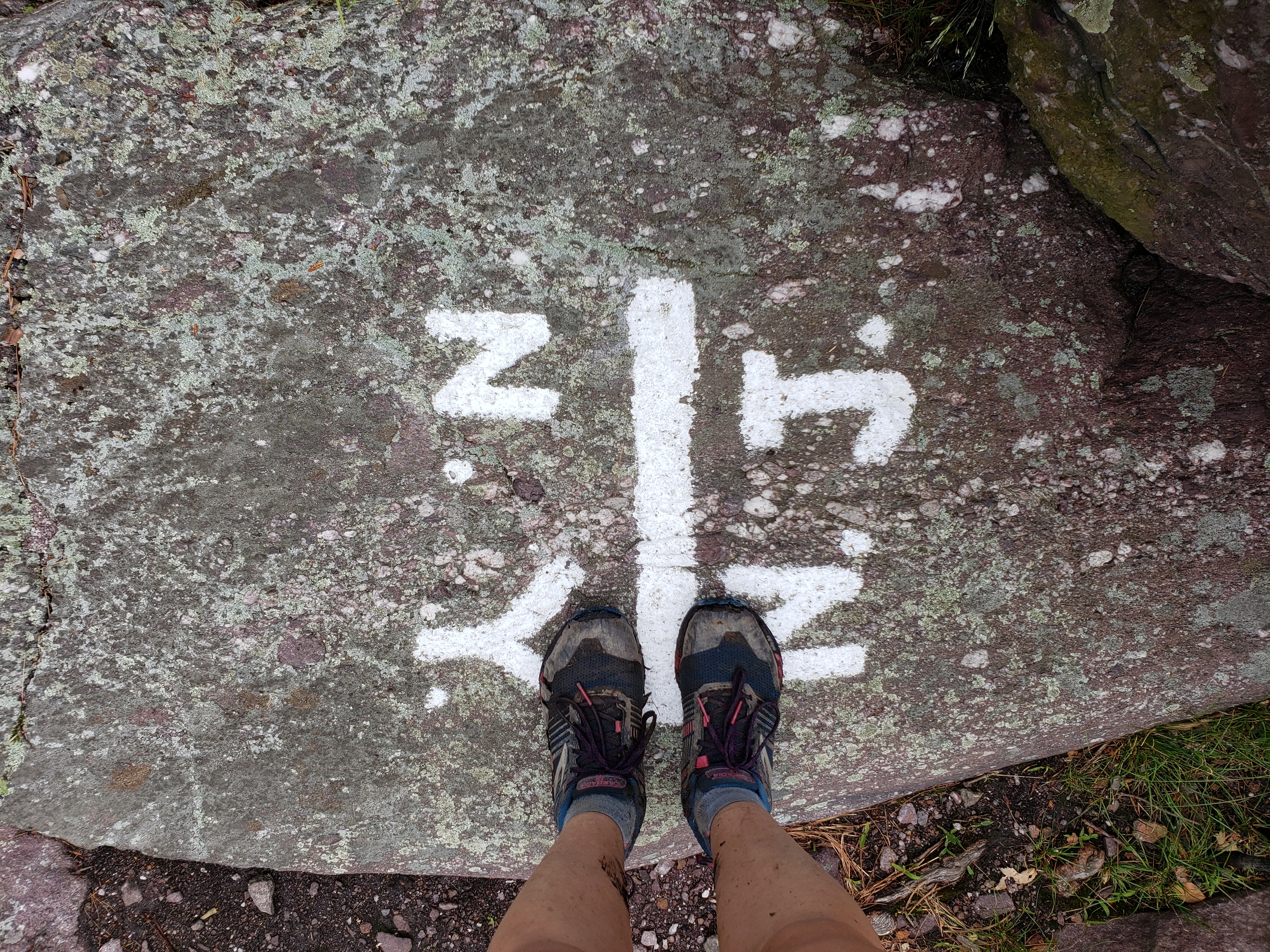 The next day was gorgeous and sunny and I got beautiful views and could see the New York City skyline. It was from far away and I found it to be very cool. I have been to New York City many times and to see just a shadow of its skyline from the trail felt special. My favorite word is the word sonder, which is the understanding that each random passerby is living a life as vivid and complex as your own and, to them, you’re nothing but a background figure, as they are to you. That it how I felt as I imagined the eight and a half million people on the busy New York streets buying coffee or running to catch the metro as I stared in quiet solitude on a mountain miles away watching their city’s skyline. 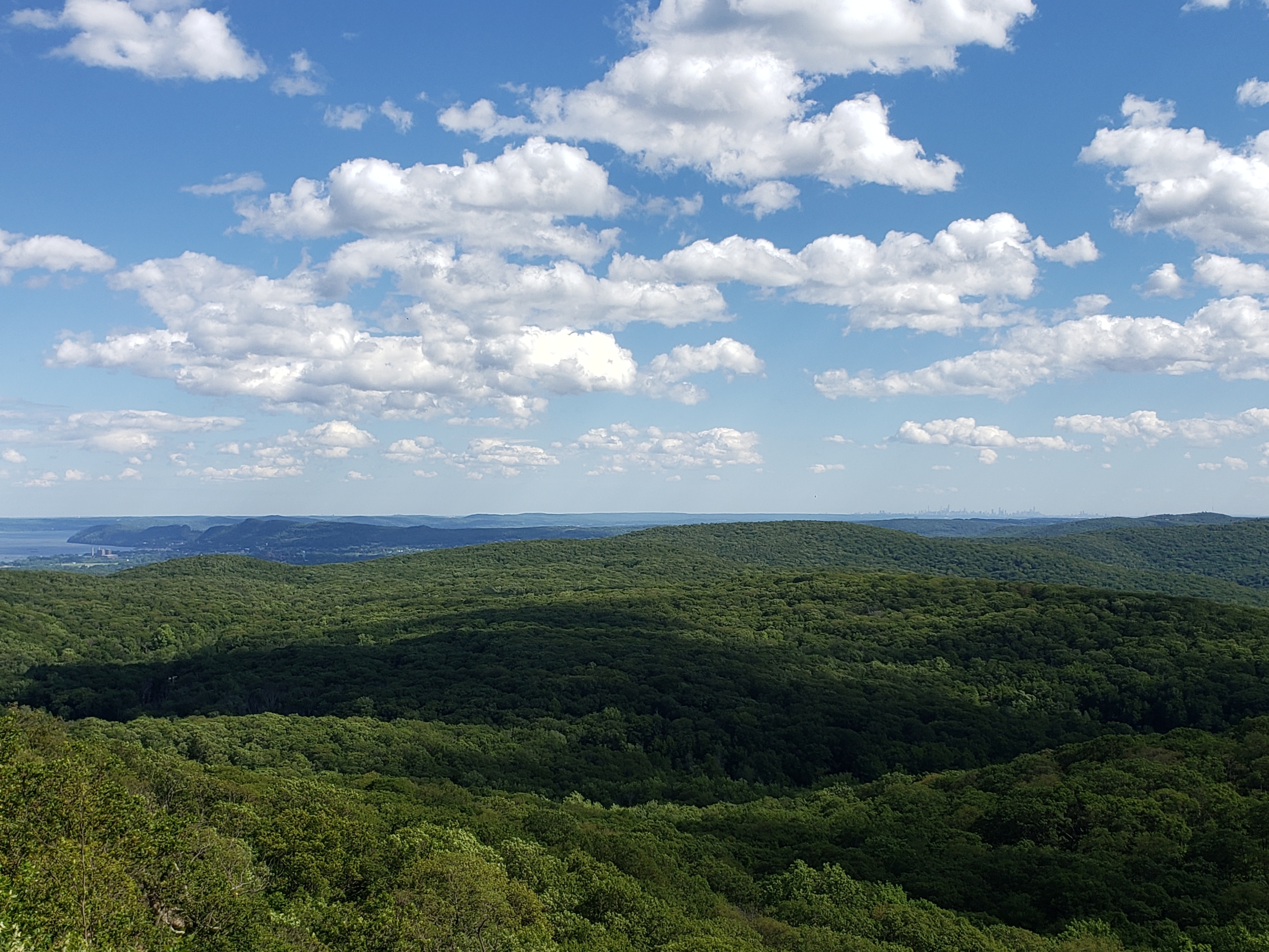 NYC skyline to the right. 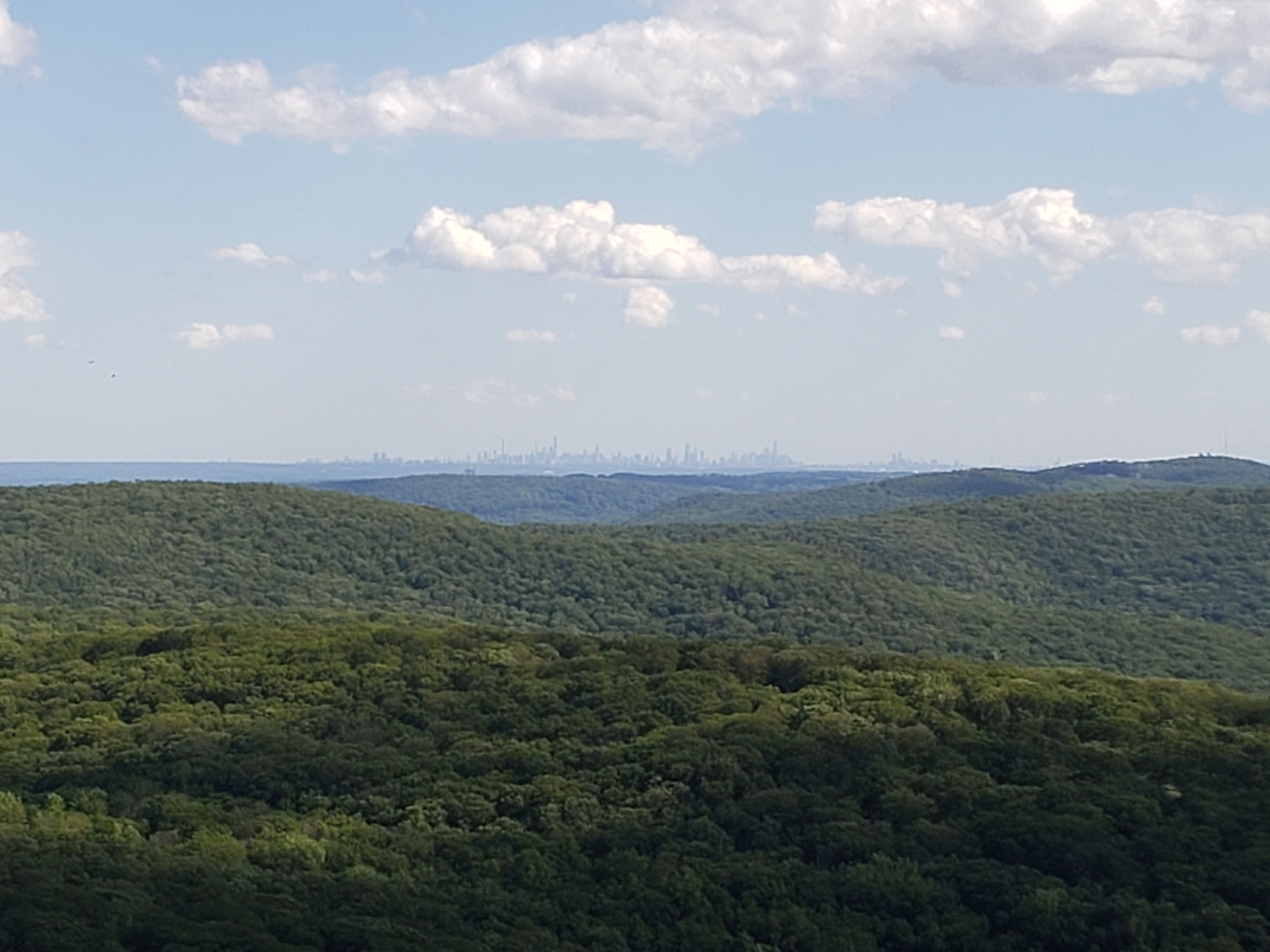 The next day I took a zero to see some family and then the following day, when I hit the trail again, I went though Bear Mountain State Park. I moved slowly through the first part of the day feeling saddened at leaving my family. My spirits picked up partway through the day but my pace stayed the same; I had no need to push to a shelter so I strolled through the trails enjoying the park. I ended up only hiking 10.5 AT miles. I loitered at the top of Bear Mountain itself and, once at the bottom, took extra time through the park and the Trailside Museum and Zoo. I went into every exhibit and got a kick out of reading the trivia cards that are scattered around the park. The zoo is small and donation based (a recommended dollar per person, which I gladly gave) but what I found so interesting about it was that the animals that they keep are ones that you could potentially see near there. It seemed to be more about instruction about the wildlife in the surrounding area. For me, I’ve been fortunate enough to see a lot of the animals on my hike, and it was cool to read about the animals that I’ve been seeing. A lot (though not all) of their animals were injured and rescued, including a bald eagle with a permanent wing injury. 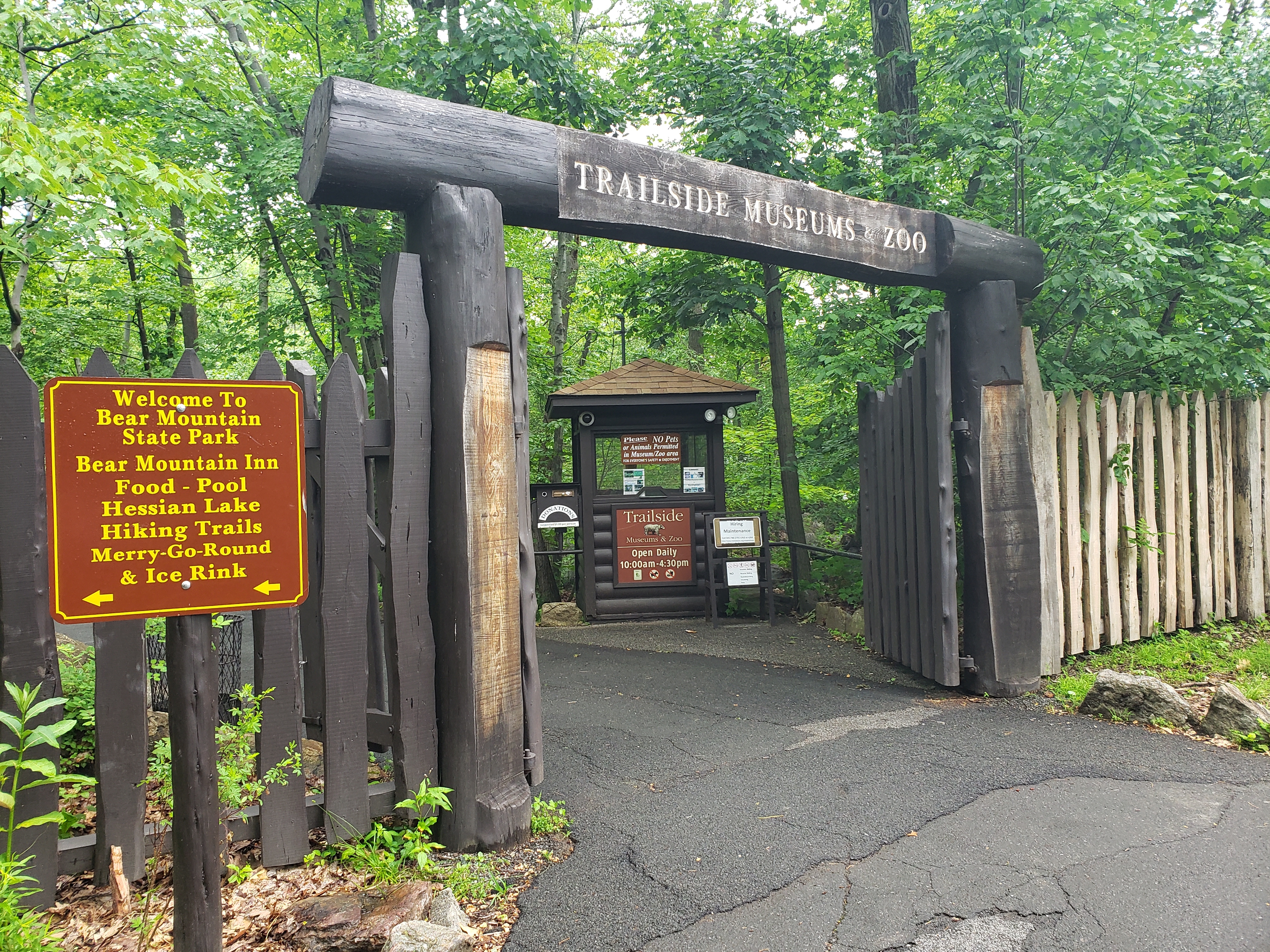 After leaving the park I crossed the bridge and climbed back up into the woods. I did a .6 mile side trail to see Anthony’s Nose. It had been on and off raining all day so I was worried the view would be spoiled but went up anyway because the cloud cover seemed high enough. And it paid off. The views were amazing. 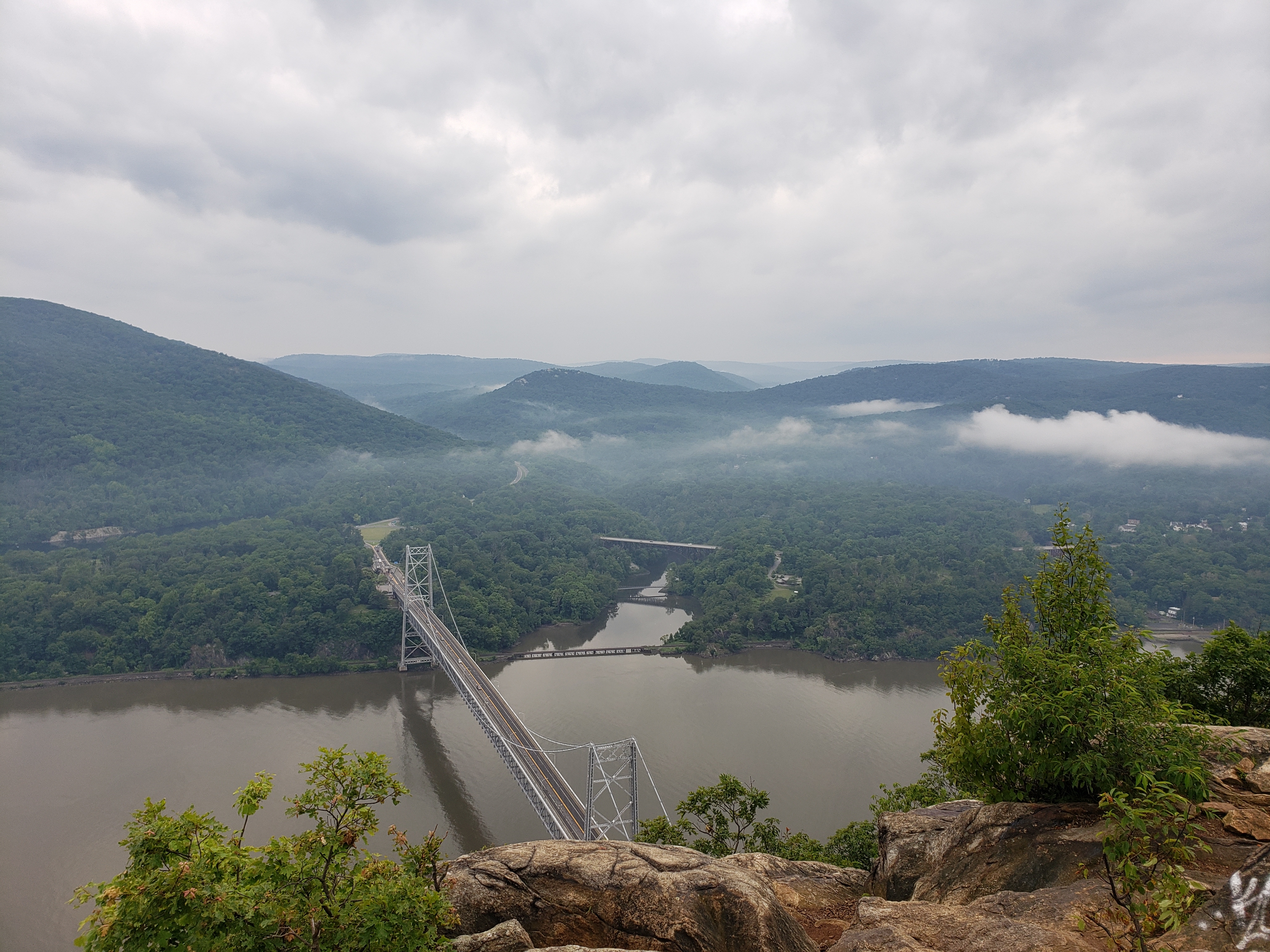 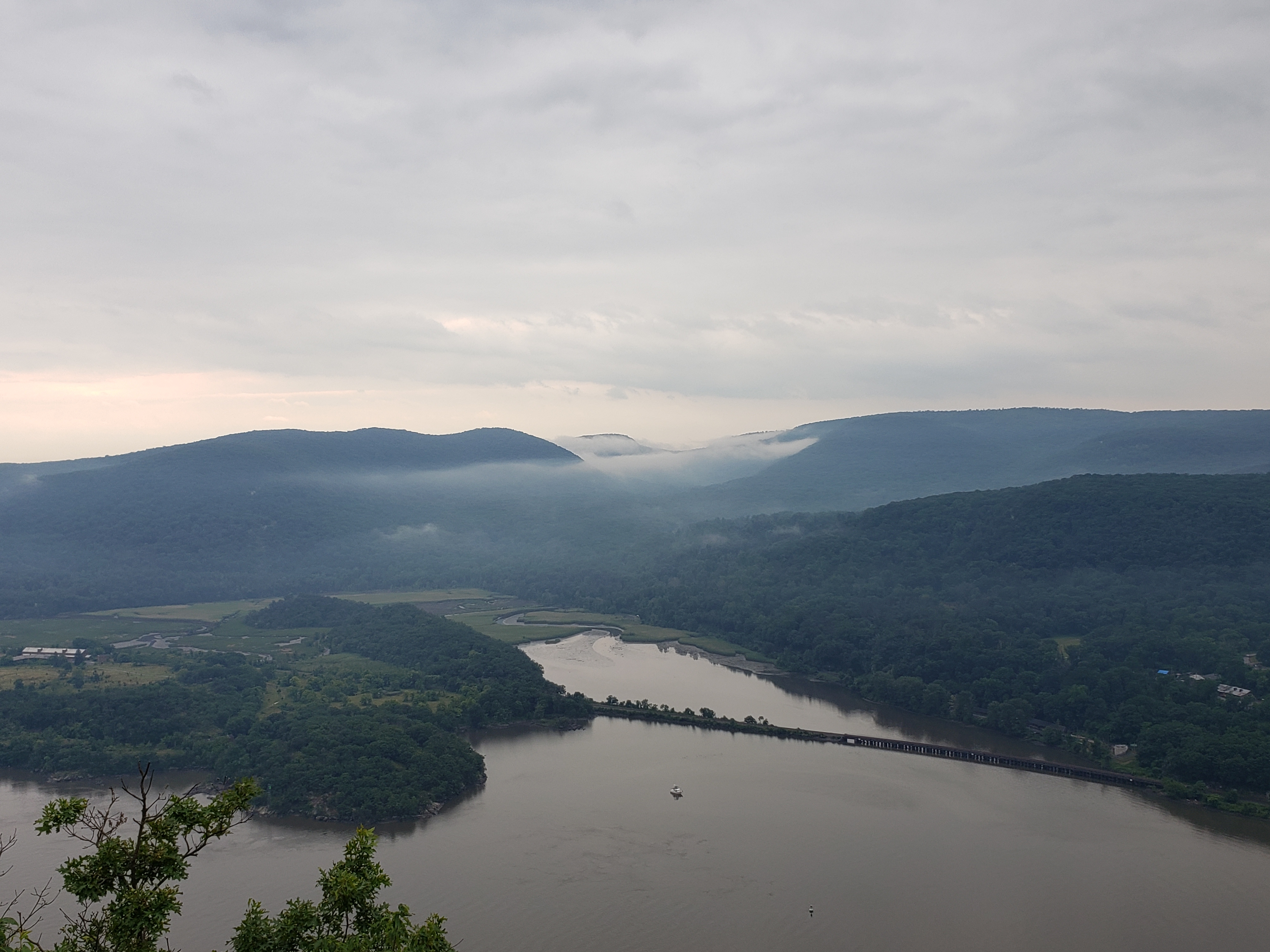 Time for Some Struggles

I hiked down from Anthony’s Nose and didn’t go much farther before camping. I wasn’t at a shelter but it was a great camp spot: flat with a perfect tree nearby to hang my food from. Even with my 1.2-mile round trip blue blaze I only did 11.7 miles for the day. So why, after taking a zero followed by a low-mile day, did my right groin feel so darn sore? I didn’t notice at first, probably because my muscles were warm, but, after sitting for a while to eat dinner and then getting up to hang my bear bag, I felt noticeable discomfort. It was immediately alarming to me because it was the wrong kind of pain. It wasn’t the kind of soreness you get after a good workout; it was a kind of pain that I shouldn’t be feeling. But ever the glass half-full type of person (or one that’s really good at denial) I told myself it was fine and went to bed.

It was a slow start the next day. I was still hurting and still telling myself that it was going to go away. Either way, I had to hike somewhere, so I continued on north, as always. My original plan was 23 miles that day, which became more doubtful with every hour and completely out of the question by early afternoon. It had been a couple of days now of on and off rain and the rocks were slick. I fell three times, the third of which my phone fell out of my pack and the screen broke. My legs were scraped and bruised and my groin was beginning to hurt so bad that I was actually grimacing with my steps. I knew it was time to stop but just had to find a place. I ended up taking another side trail to a state park. It had a lakeside beach, real bathrooms, and free tenting in the overflow lot. For such a rough day, that night eating and reading on the beach, in what turned out to be the only spot of sun for days, was pretty relaxing. 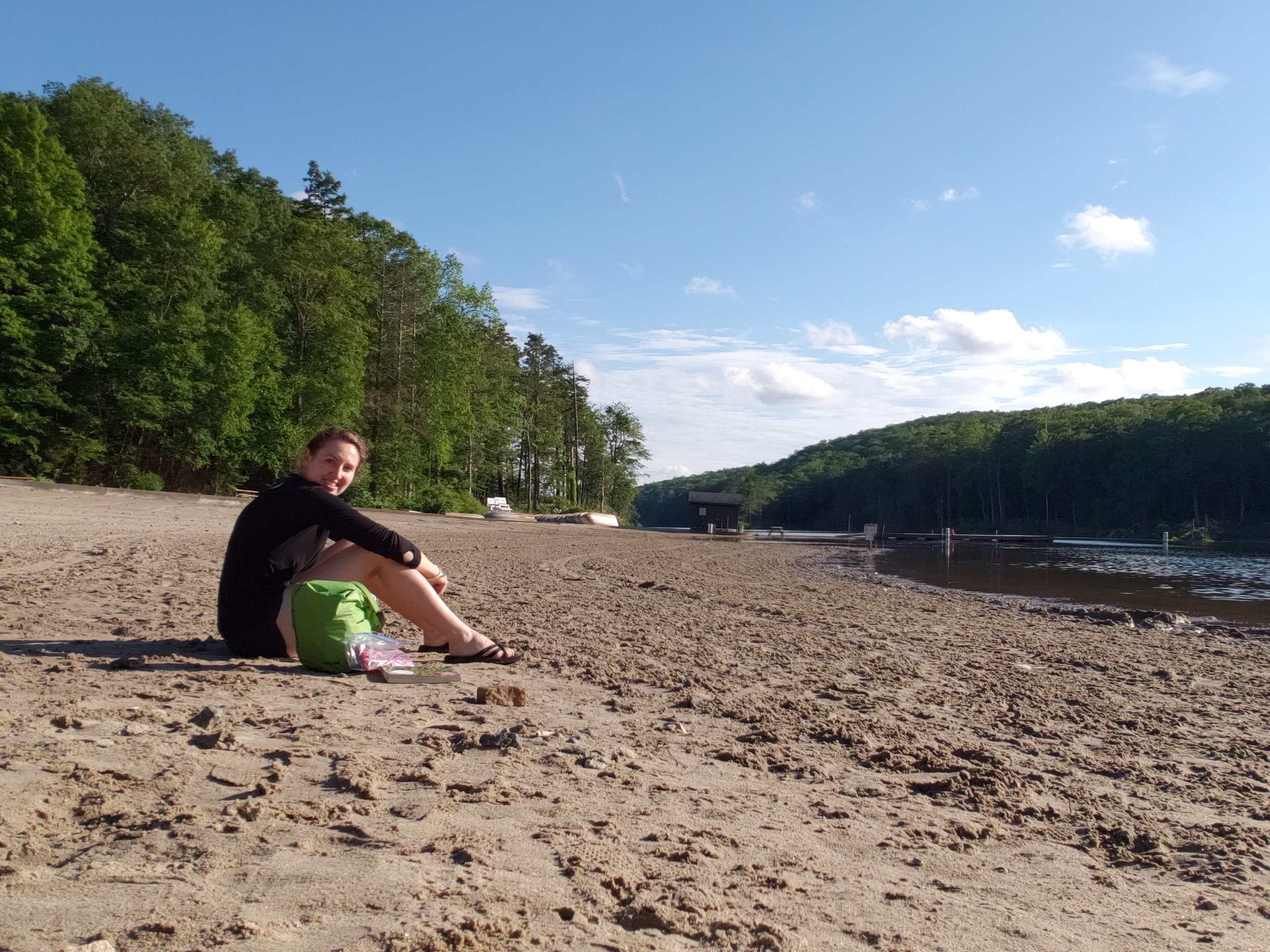 The next day was rain. Though it had been raining for days now, this was a different kind of rain. It was 12 hours of nonstop, drenching rain. It started at 6:30 in the morning and went to 6:30 in the evening. I did short miles again that day and stopped early at a shelter roughly ten miles before Pawling, NY. Here, some friends that I had been hiking with but gotten separated from as we all took zeroes at different times, caught up with me. It was great to see some friendly faces.

We all went into Pawling the next day and I went straight to the laundromat to wash and dry my soaking wet clothes (my rain jacket can only take so much). I also needed to pick up some more food because I realized I would run out before making it to my next planned resupply point. For four days straight I had basically cut my average miles in half so it was taking me much longer to get there. We went out for drinks that night because it was Pome’s birthday, and then went to the hotel and starting watching The Hitchhiker’s Guide to the Galaxy. 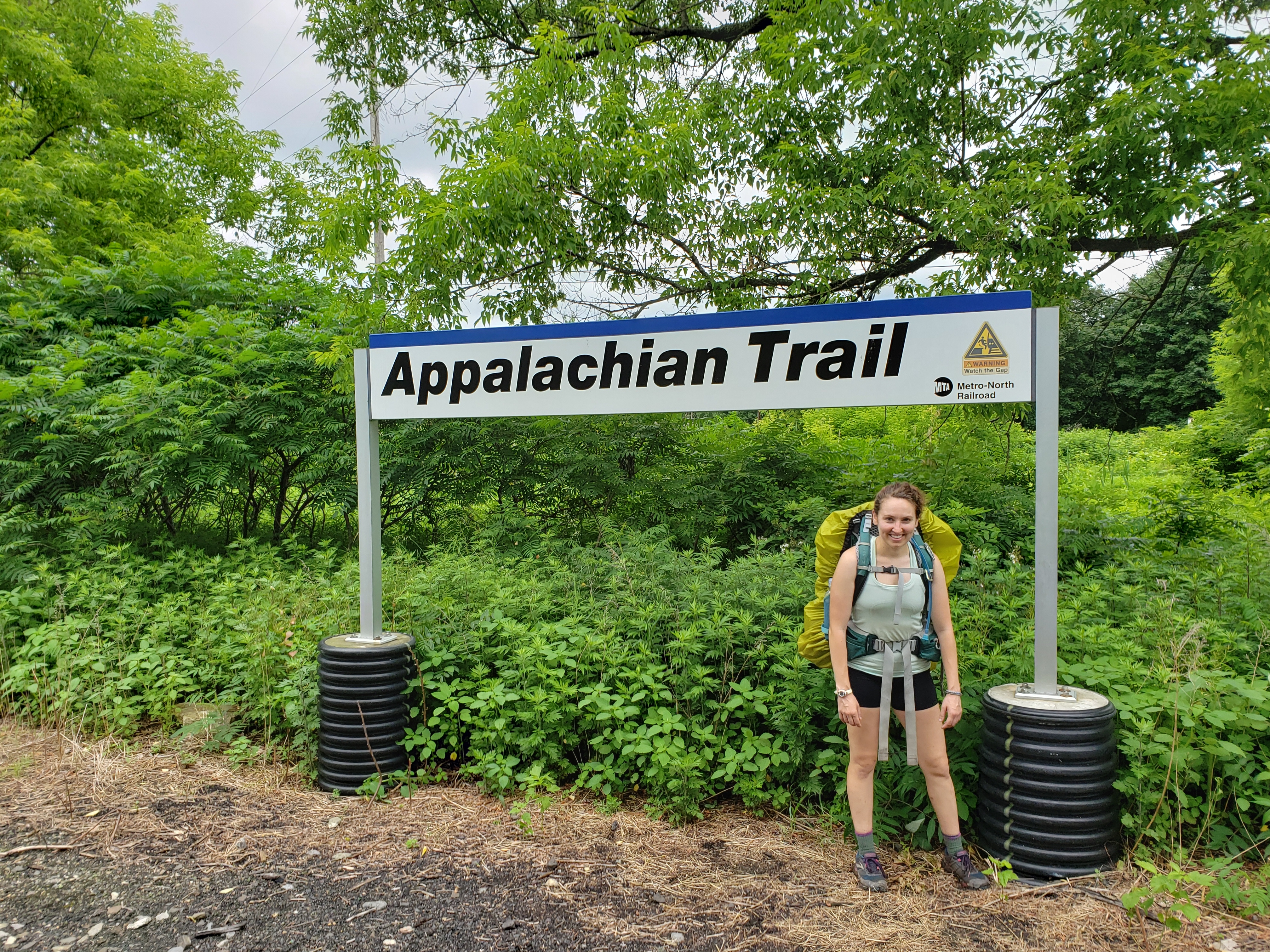 Appalachian Trail Metro-North station at the road that leads into Pawling.

The rest of the group was zeroing the next day but, as I planned to zero in Connecticut, where I live, and the border was only seven miles away, I hiked out the next day. The plan was to hike Connecticut first and get picked up at a road crossing just over the Massachusetts border. I had to push back my original pick-up time due to my groin slowing me down and I didn’t want to do it again. In my anxiousness to get home, and the fact that I was sick of hiking such low mile days, I pushed too many miles and hurt an already aggravated muscle. One night, as I stopped to filter water, I knew I had overdone it. The few steps from my water bottle to the stream felt agonizing. I was walking with a noticeable limp.

The hike out to the road crossing the next day began slowly and painfully and I arrived a couple of hours after I intended. When I was a few miles out I encountered a swampy area, somewhere in southern MA. It was horrible. Absolutely horrible. I went from just hiking along, not really noticing any bugs, to being swarmed by evil, flesh eating, bug monsters. I’ve hiked through buggy areas before but nothing like this. They were relentless. I could feel their bites and I just kept slapping my skin where I felt them. I looked down at my hand and it was covered with dead bug and blood. I became so frustrated that I began to run. I can’t imagine how ridiculous I looked with my huge pack on, lumbering through the trail while frantically waving my arms in front of my face to swat the bugs away while still trying to hold my trekking poles. An amusing image to be sure.

Worst of all, because of my running, the pain in my groin was off the charts. I welled up with tears as I limped the last two miles to the road. About a mile out I saw my dad, who had started hiking south down the trail to meet me. I felt a million times better just having him there to walk the last mile with me.

Part of why I struggled so much on this stretch was the obvious: I fell a lot, cracked my phone screen, hurt a muscle, and got a lot of rain (turned out to be a six-day streak). But, all of that aside, I still felt like this stretch was a challenge on the mental end of things. This stretch felt more like work than anything. I was looking so much at getting home that I stopped enjoying where I was at. I didn’t listen to my body and pushed bigger miles than I should have. This section was also technically harder than I expected it to be. I wasn’t mentally prepared for all the rock scrambles.

Though the rain continued through most of Connecticut, and the pain in my groin increased, I had an easier time through it because I was mentally excited to have hiked home. And, since it is my home state, I’ve largely skipped over the details of my hike in CT because I want to pay homage to it and give it a post of its own. Stay tuned!