An Ode to Pennsylvania (That’s Not an Ode at All)

You were no fun

and from you I now shall run

All the hikers you seemed to mock,

“try and get through all this rock.”

For why have a trail of dirt

instead of rocks that really hurt?

Every day my feet were sore;

I feared every step for my demise

and the inevitable times where my ankles would capsize.

On top of that, you wrecked my shoes,

though seldom rewarded us with views.

You had a flooded beaver dam,

which sure was neat,

but otherwise, I hate to say,

often were a yawn.

A pleasant time for hikers you surely lack,

and now I’m gone and won’t look back.

I have so much love for the Appalachian Trail that I hate to say that there’s this chunk that I didn’t like, but it just wasn’t fun. At the beginning of the state there were long, flat stretches that I had been looking forward to but ended up being, well, kind of boring. Then, just when I was starting to think that the Rocksylvania nickname was overhyped, the rocks came. The trail would go from hiking on medium-sized rocks, to hiking on a trail that had some dirt but rocks sticking up everywhere and you just had to try and avoid them, to hiking on top of piles and piles of rocks, to basically rock climbing. I sent some pictures of the rock trail out to friends and family and would be asked, “But where is the trail?” But that was the trail.

At one point, Bolt and I were starting to hike after a lunch break and I followed him down what looked like a groomed, dirt trail. He was about 100 feet ahead when he turned around and started looking for the trail because the trail we were on abruptly ended. We backtracked and found the real trail. It was ten feet to the right of the well-groomed, dirt path and didn’t look like a trail at all because it was all rock. What a shock.

My feet were pained and sore every night from the rocks. But, worse then that, it was mentally wearing. There was a point every day when I just became frustrated because I was sick of dealing with the rocks. Instead of lowering my miles, or stopping for the day when I grew frustrated, I took the opposite approach. I ended up pushing big miles because I was ready to be out of Pennsylvania. The general consensus when I messaged friends back home that I hit New Jersey was: “Already?”

There were also a few sections in Pennsylvania that I would argue were not hiking at all but rock climbing. Straight, vertical rock walls where I would have to throw my trekking poles up and over because my hands would be necessary to help myself climb up. Stuff that I didn’t expect until the Whites. I had previously heard about the climb out of Lehigh Gap and pushed to get there before rain came in. Because the only thing worse than all that rock would be wet, slippery rock.

I also had a less than delightful surprise one morning in Pennsylvania. Which, granted, was not Pennsylvania’s fault but will always be linked in my memory to my second-to-last Pennsylvania morning. I leave my dirty, disgusting shoes outside my tent at night, as most hikers do. I also check them and shake them out in the morning to make sure that nothing is hanging out in there. But one morning, I forgot. I just slipped my foot right in. I didn’t even get my foot all the way in before realizing that something other than my foot was inhabiting the space. I slipped my foot right back out again and just dropped the shoe altogether. Whatever it was that I felt was  large enough that I didn’t want to even be touching my shoe anymore. Sure enough, out popped the biggest spider I have ever seen. I’m honestly proud of myself for not crying.

Now for the Good

That’s not to say that I was miserable in Pennsylvania; there were some enjoyable moments for me. A big claim to fame that Pennsylvania has, of course, is the halfway point. There’s no 2019 sign for the halfway point, since the trail mileage changes slightly every year, so when I hit halfway I was just on a random spot on the trail. Shortly after, I passed the 2018 halfway sign, and a bit after that I hit the commemorative sign with the hiker log, which I was excited to see.

There was also a point on the trail that was flooded with water because of beaver dams. This was easily my favorite part of Pennsylvania. There was a dry route for hikers to hike around it if they wanted to, but I went through it. It was fascinating to see what the beavers built. 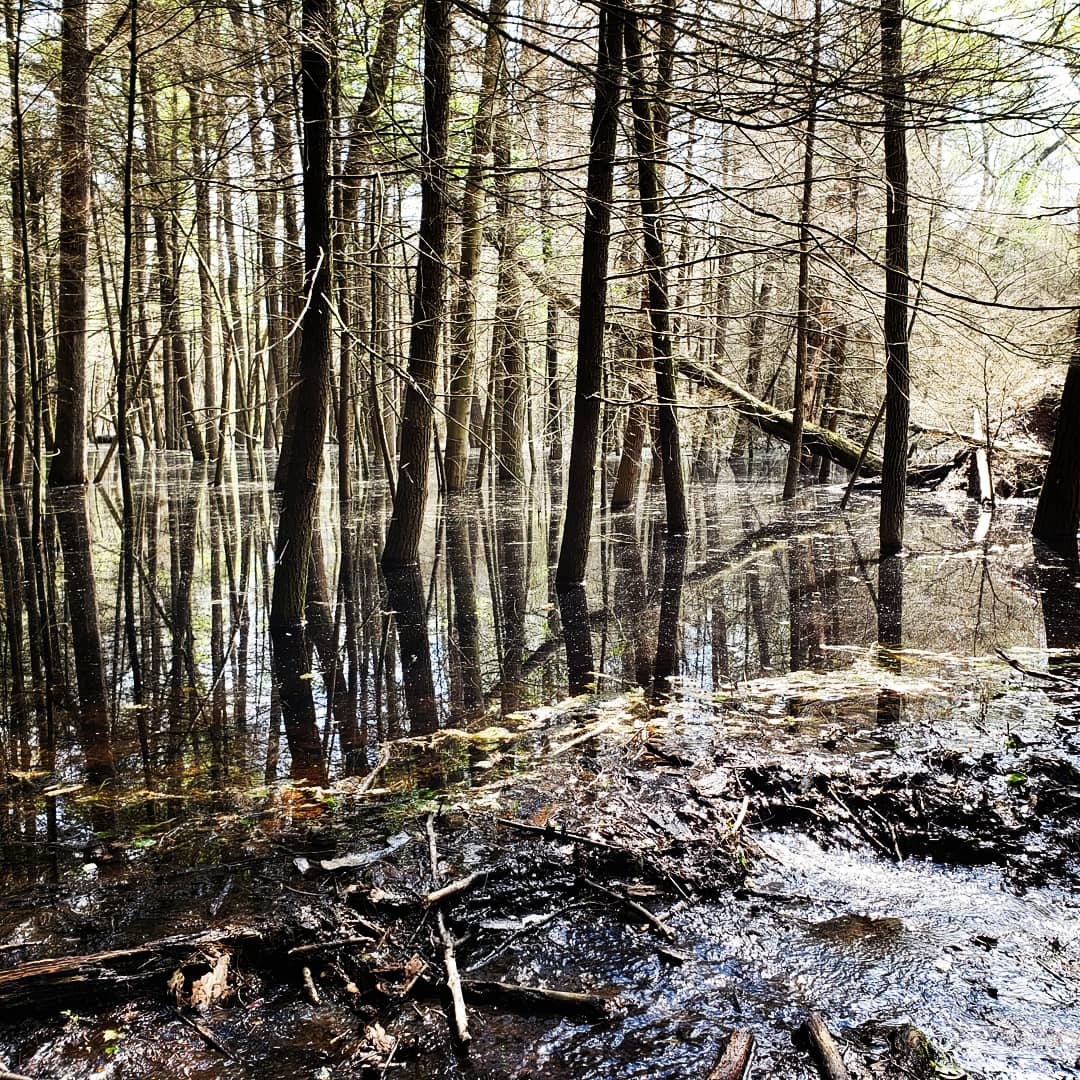 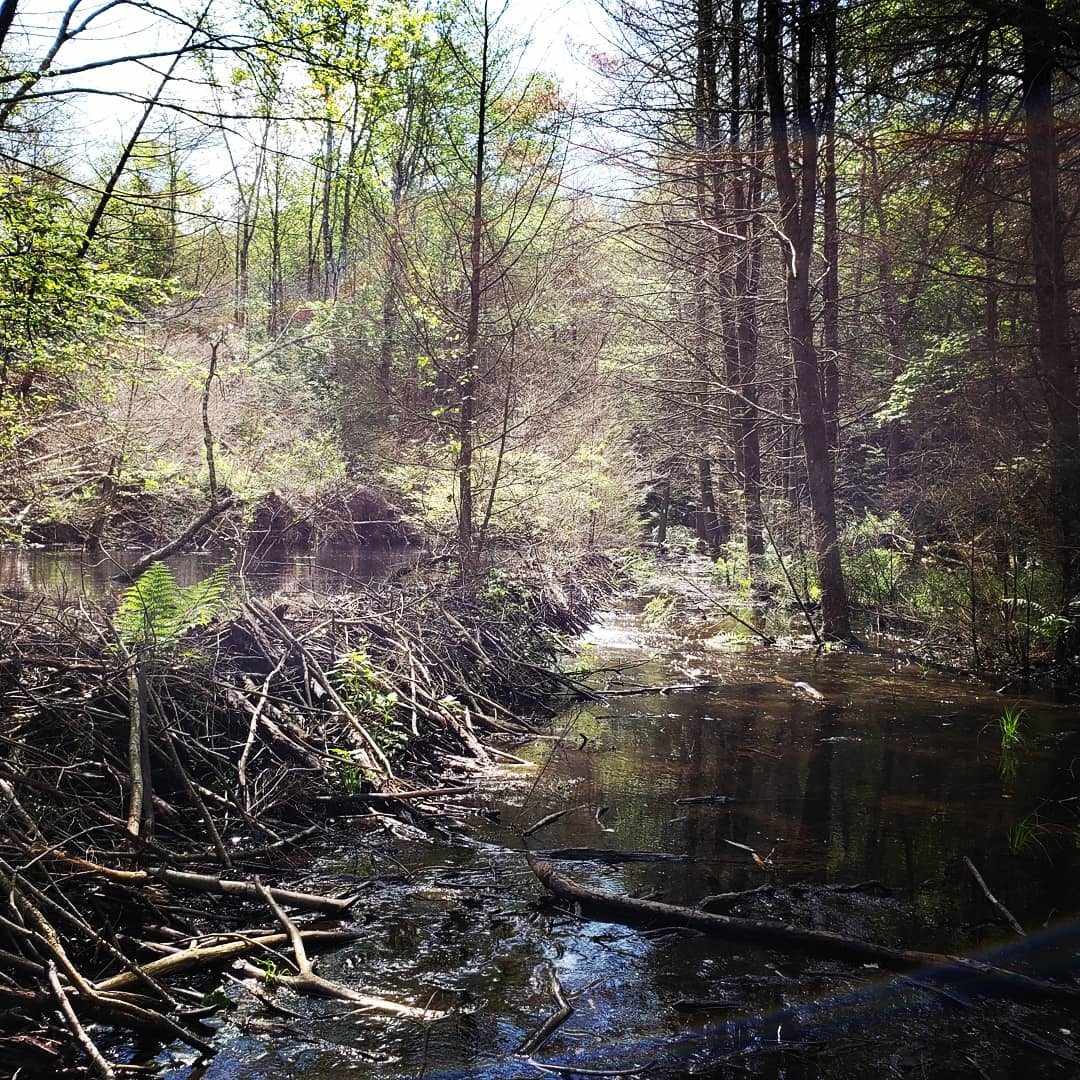 Another fun moment was seeing a new snake. I saw a ton of snakes throughout Pennsylvania, predominantly rattlesnakes. The good thing about the rattlesnakes is that they rattle. Which is great because snakes so easily blend in with all the rocks and roots. But they make noise when you get too close to let you know that they’re there and would like you to stay away. Very polite. However, there was a time where I stepped inches from a snake’s face. It immediately coiled back, which caught my attention and, out of the corner of my eye, I saw the familiar black and tan coloring that the rattlesnakes possess. I awkwardly jumped sideways while ridiculously yelling out, “sorry!” at the snake. Still, no rattle came and, upon looking back at it, I realized that, while the colors were the same, the pattern was different from the timber rattlesnakes that I’ve been seeing. Furthermore, the head was shaped very differently. I took a few pictures and later identified it as an eastern hognose snake. They splay their head like a cobra when they feel threatened (sorry, little dude!). Though I’ve never been fearful of snakes, I did not expect myself to be so fascinated by them on trail. But I’ve found them so interesting and have had such a fun time taking their pictures and identifying them. I keep calling the eastern hognose “my” snake because no other hikers I’ve met yet have seemed to see one.

And that’s a wrap on Pennsylvania!