After being well-fed and rested during a home zero day, I resolved to increase my daily hike mileage over the next ten days.  Much of the trail would be familiar, as I’d done prep hikes in MA and VT in 2021.

The home comforts of fresh food, family time, and a familiar bed turned out to be as wonderful as I expected.  When I stood on the bathroom scale I’d found I had lost – yikes! – seventeen pounds in my first thirty-nine trail days! (I’d have three hot dogs in addition to a full chicken dinner that night.)

I was also surprised by how quickly my zero day passed.   Between gear swapping, laundry, air drying and resupply, the late afternoon came quickly – and I’d be back on the trail in the morning!  One BIG plus:  I swapped out my beaten-down Hoka Anacapa boots for a new pair.  They had performed fantastically for 700 miles but the soles had turned to mush.

A nice return to the Massachusetts woods

Day 41 brought temperatures in the eighties to western Massachusetts, but I stayed cool enough on my route to Kay Wood Shelter.  The trees hid me from direct sun, and a light breeze graced the ridges where much of the AT ran.  Early on I was treated to a pleasant view of Finerty Pond: 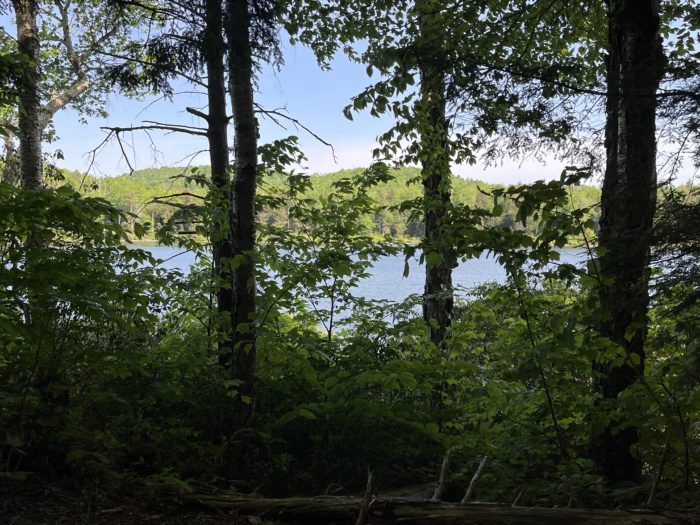 At lunchtime I’d encounter a volunteer trail crew wrapping up a maintenance effort at October Mountain Shelter.   They’d moved the privy to a new spot and re-stained the picnic table.  Please thank these wonderful helpers (as I did) whenever you see them on the trail.  Their hard work makes AT hiking more enjoyable for all of us!

Massachusetts wants to steal (or dismantle) my poles!

One quirky thing I noticed about hiking this section of the AT was the number of times a trekking pole got stuck behind me.  This might have occurred once every few days up through Connecticut, but now I was being yanked backwards fifteen times or more per day!  Once my pole came apart in the middle – which hadn’t happened since Day 1 of my hike!

I can only attribute this to the beautiful, healthy forests I was hiking through here: 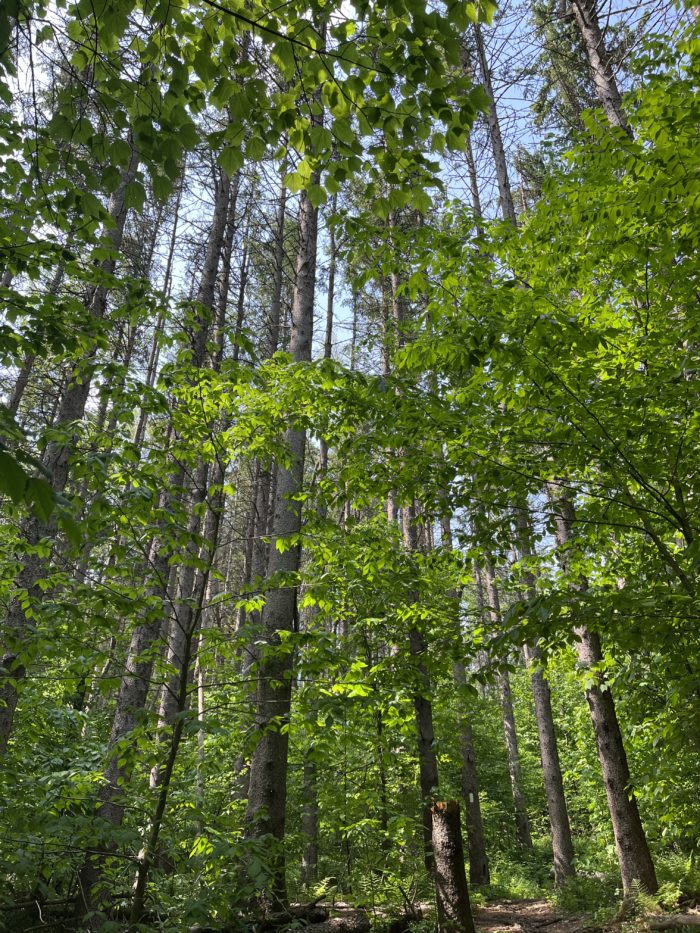 Many sections of the trail around Dalton and Cheshire had one hundred foot trees, and the trails were cross-crossed with roots.  In fact, the AT from the Mass Pike north is a particularly “rooty route”.

And more musing on poles

I’ll admit it:  I have a love/hate relationship with my trekking poles.  Being a lifelong day hiker, I’d actually never used them until my 2021 AT prep hikes.  But I immediately found them quite useful for:

But sometimes these long metallic skewers just drive me crazy!  Like when they start collecting leaves like those trash pickup sticks a park worker uses.  Or when you need to throw them ahead of you because they’re a hindrance on steep rocks.

But my biggest complaint:  trekking poles absolutely refuse to stand upright!  Here’s a rare photo of them behaving well (but that may only be temporary): 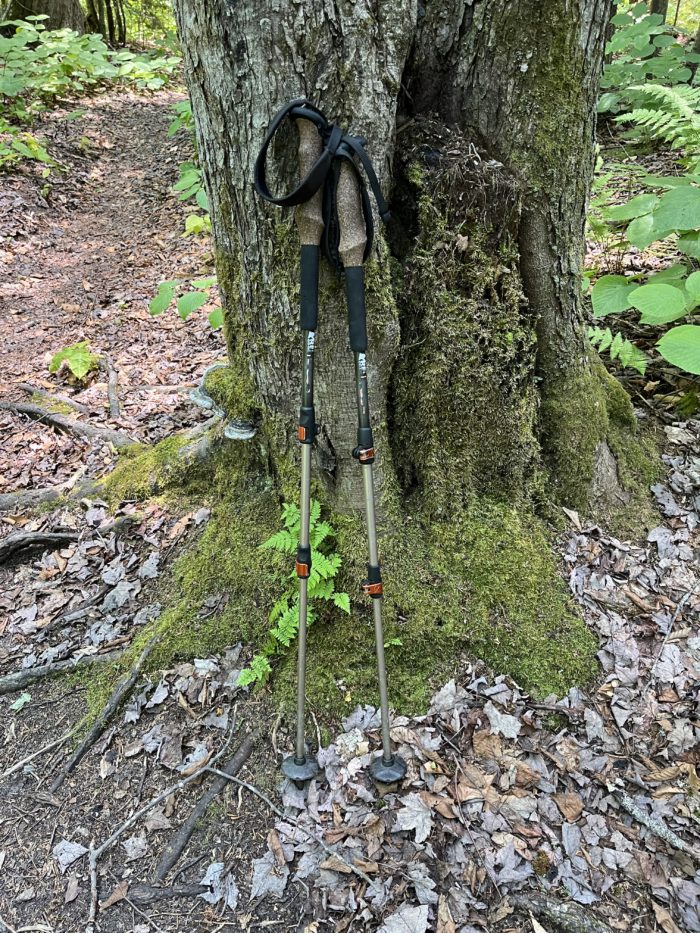 Which brings us to something that I call “High Road’s Trekking Pole Postulate”:

Trekking poles rested against a flat surface (such as a tree, rock, or wall) will result in one or more poles falling over 70% of the time.

This is so frustrating that typically I don’t bother trying to stand up my trekking poles at all.  I just toss them on the ground immediately.  At least I know where they are going to land!

And there is, of course, the Winter Corollary to this postulate, involving the cousins of trekking poles:  ski poles.

Ski poles pushed down into the snow for the purpose of keeping them upright will result in one or more poles falling over 70% of the time.

We’ve all been there, right?  Smash them once into the snow, then twice, then a third time.  Then you slowly move your gloved hands back, hands open like you are about to do a crystal ball reading.  And you think that you are OK.  But then you turn to do something else, and …. flop!

I got Rickrolled on the AT?

Later on Day 41 I met a family of day-hikers returning to their car.  After Mom snapped a quick family picture, the ten year old daughter broke into an a capella version of “Never Gonna Give You Up”.  As I passed by, I said “Nice Singing!”

Her mother laughed, saying “She’s been on a Rick Astley kick lately!” (Yes, there are unanswered questions about how a ten year old in 2022 gets hooked on a minor star’s 1987 hit song, but let’s let that pass.)

To this I could only reply “Oh, wow”, which was my way of passing on sympathy to Mom and the other family members having to endure that “kick”.  Well, if you’re a regular reader of my blog, you know exactly what happened next.  My non-stop music playing brain seized on this, and I had that British Howdy Doody’s Motown voice rattling around in my head for more than an hour.  Thankfully I only know two Astley songs (Together Forever was the other) or it may have lasted for hours and hours!

And a surprise visitor!

And although that incident was memorable, the Most Memorable Moment of the day (and maybe the trip so far!) occurred at 6pm.  My Japanese friend Shingo, who I’d heard was off the trail, walked up to the picnic table looking fully healthy!  I was overjoyed!  I told that I’d been worried about his health based on reports from other hikers.  He shared a few additional details with me, but it was just great to see him back on the trail!

Through Dalton and Cheshire

On Day 42 the trail wound through the wooded areas and streets of both Dalton and Cheshire in western Massachusetts.  Dalton was a particularly charming little town, full of neatly decorated older homes.  I even had a chance to meet Tom Levardi, the Depot Street resident who gives thru-hikers water and camping space at his house.  We had a nice conversation.

I discovered that Cheshire also has a Cobble that the AT climbs, with a fine town view.  One of the mysteries there was why the rocks at the top were giving off this powdery white sand.  It was on all of the rock surfaces, and even on the trail itself: 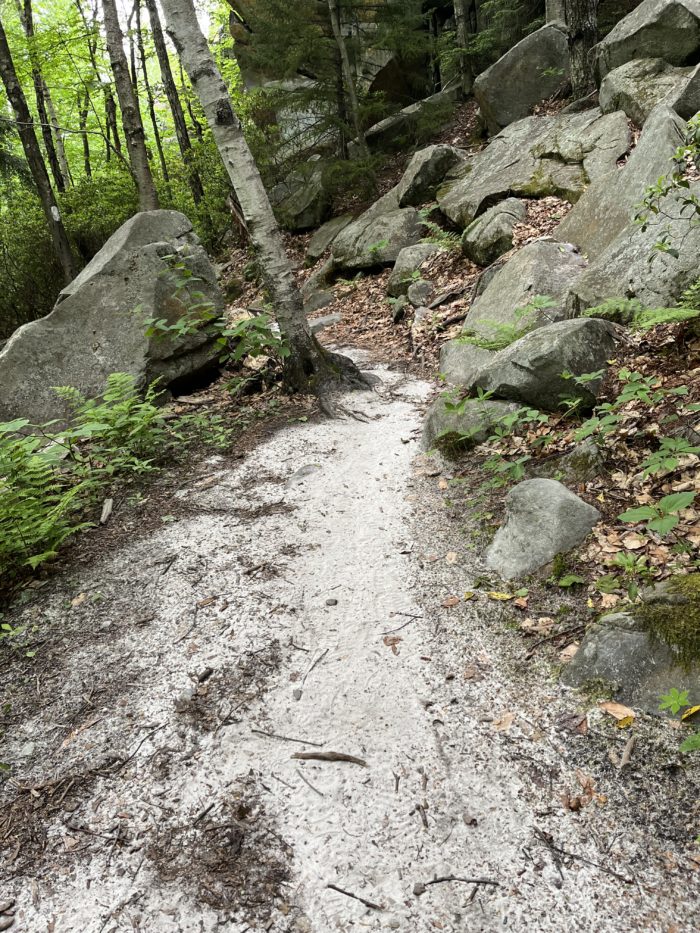 My current theory is that this is gypsum, which is quite commonly found on the earth – but I don’t see it often when hiking.  If anyone can contribute in solving this mystery, please do.

I really wanted to put in a big mileage day by going up and over Mount Greylock, but the weather did not cooperate as heavy rains came in midday.  I took shelter at the Father Tom’s campsite in Cheshire, and resolved to only do 15 miles by stopping at the Mark Noepel Shelter on the next ridge.

And yes, given that shelter name I instantly thought of Dire Straits’ lead man Mark Knopfler.  Needless to say that my musical brain played Sultans of Swing, Skateaway, and Money For Nothing on a loop all the way to the shelter!

So I resolved on Day 43 to attempt my big mileage day.  The forecast noted that the rain would be clearing out that morning, making for a good hiking day. I’d have to go up and over Mount Greylock, Massachusetts’ highest peak, through North Adams and into Vermont for a total of 24 miles.  I had a huge degree of confidence that I could do it, since I’d hiked that entire stretch of trail on a couple of prep hikes in 2021.  I arose early and found the summit of Mount Greylock to be cloud enshrouded and kind of spooky: 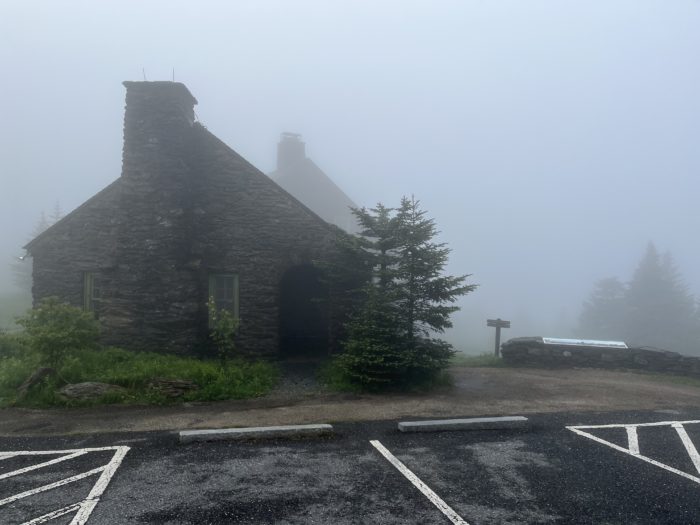 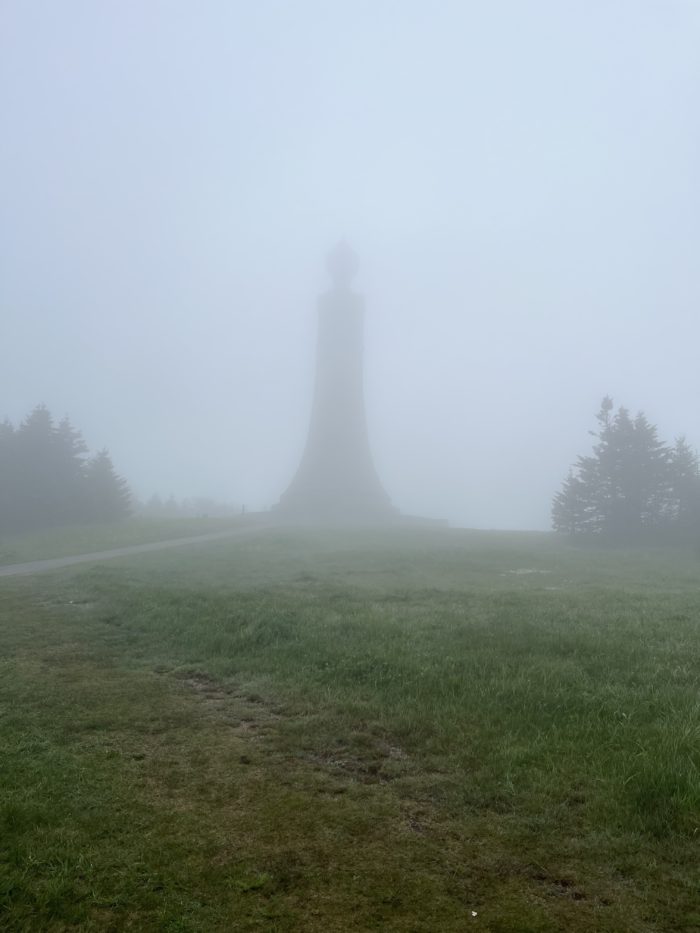 As I continued on, though, the weather broke — including right before my eyes on Prospect Mountain, making this the MMM of Day 43! 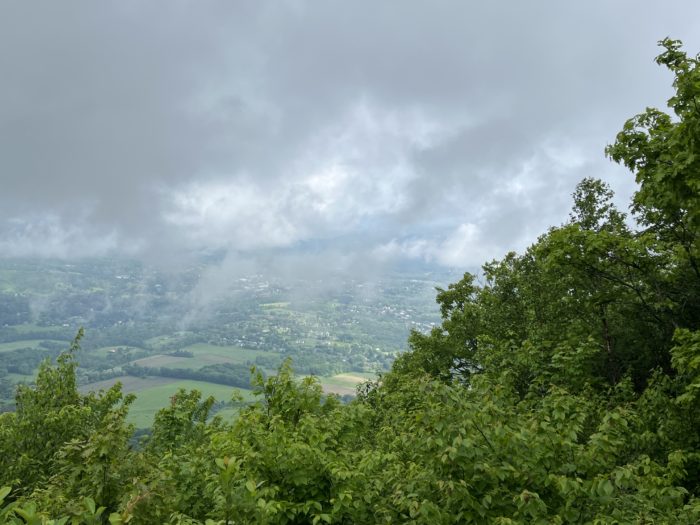 I was absolutely driven to complete my 24 mile hike that day, and I did so in about 12 hours despite some significant up and down terrain.  My thought behind this push for mileage was to try to see if I could average 18 miles per day here in northern Massachusetts and Vermont, knowing that I’d do much less in New Hampshire’s rough peaks.  So that 24 mile effort, when added to my two 16 mile days prior, gave me greater than an 18 mile average for the last three days.

I planned to replicate this pattern in Vermont by sometimes doing 20+ mile days to push up my average miles.  I hoped that it wouldn’t add any additional strain on my body, but after reaching Vermont at the end of this big 24 mile day, I only felt great!  On to the peaks of Vermont!