– The Rabbits Hole Hostel to Damascus –

In the AM darkness, the rain could be heard splattering on the tent. The rains subsided just enough to give a glimmer of hope to not have to break down camp in the rain. The rains began to unleash with their pure potential. Realizing there was no break anytime soon, a rain jacket was put on and the food bags were collected.

A shout was yelled towards Branden’s tent. “Are you breaking down camp soon?”

A reply came swiftly as the tent flaps wafted upwards rising with smoke, “who dares disturb my sleep?” The tent flaps settle back down as the smoke came out of the tent followed by some flames.

Stating, “anyways, Damascus is nearby. I don’t speak angry dragon, so try again.” “Going to be ready soon?” A reply of the longest “Nooooooo!!!” was heard. Shortly after, half of camp was broke down.

Saying goodbye, Branden was told to meet in town. The almighty book was consulted. It told of a time where there were 10 miles to a new state. This was named Virginia. A sign came into view.

It read “0.3 miles to ___,” the rest was illegible. Almost 10 miles were traveled in around 3 hours. The first glimpse of Damascus came into view. Red, yellow, and blue roofs could be seen. Many vibrant color choices were present. Trail Days was supposed to be celebrated here every year.

The rains from nights before made the path slick. Every step produced a few foot-long trail smears while trying to get traction. Careful placement of poles slowed this a lot, but not fully. Many switchbacks later, the city presented itself. As the bridge was crossed with the raging river below, the town was around the way.

An aerodynamic bullet was sanctioned to stay in for a few nights. It was a dark silver travel trailer with all the amenities hooked up. A heater, shower, electricity with a roof, and a solid door with windows.

Still early in the afternoon, all tent pieces were separated carefully and spaced out on the lawn to dry. Hanging up laundry, it was remembered that the day travel socks needed to be replaced. They busted out at the heels. Darn Toughs can be replaced for warranty through any authorized dealer. Heading back for an afternoon nap.

Getting woke up in the early AM, the body thought it was time to get up due to 7 days a week conditioning. It was simply a light passing the window. Sleeping a bit more, a god-awful sound was awoken to. This was so loud, my head hit the ceiling in response. Already heated and angry, the noise didn’t help.

Errrhhh ehhh errrrr ehhhh ehrrrrrrrrrrrr. What is that noise? Again it resounded but louder. As reality set in realizing the alarm clock wouldn’t shut up, it was decided breakfast was needed. For some reason, fried chicken sounded really good at this point. Decisions: oatmeal or a restaurant?

A platter filled with bacon, eggs, biscuits, and gravy with cheese was savored before being torn into. What a wonderful stop. That hit the spot. Checking over some of the gear, a hiking store decided to be visited.

This is where the holey socks were replaced along with some new bite valves for the hydration packs. Alas, it was time to leave the town. 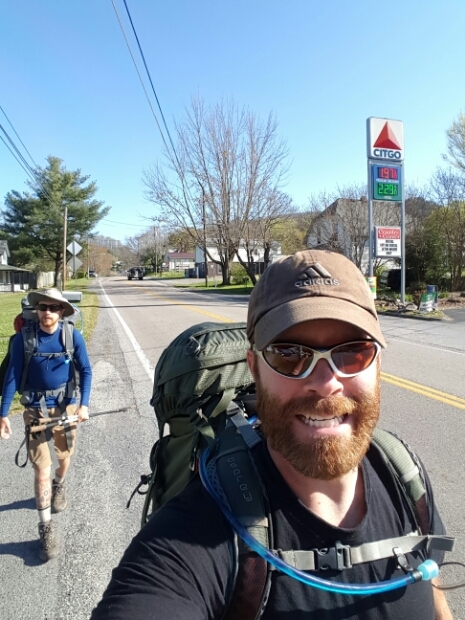 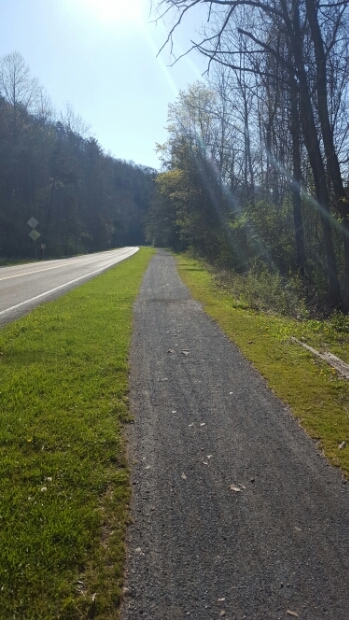 About a 15-mile day was decided on. Leaving was tough, but onward the journey must go. The sun was shining with around 60 degrees and a decent breeze blowing. All of a sudden, the breeze stopped and the humid heat emerged.

Sweat poured out of everywhere. A welcome break and distraction happened. A hiker could be seen. Chatting for a while, it was found out this woman was day hiking in small sections. She carried no food or water. Her husband was following her along with their camper. Thru-hiker? Hmmmmmmm. Goodbyes were said and onward we went. 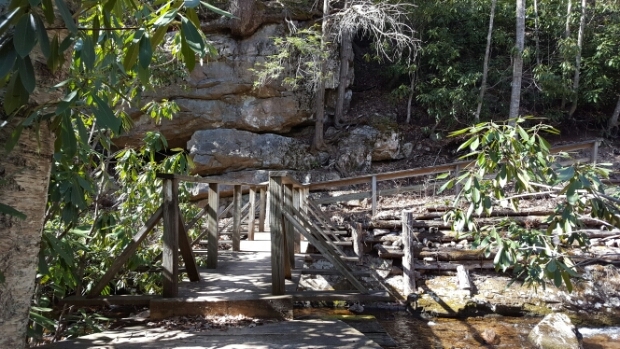 Large boulders had to be hopped across and straddled carefully. The path carefully mirrored a river. 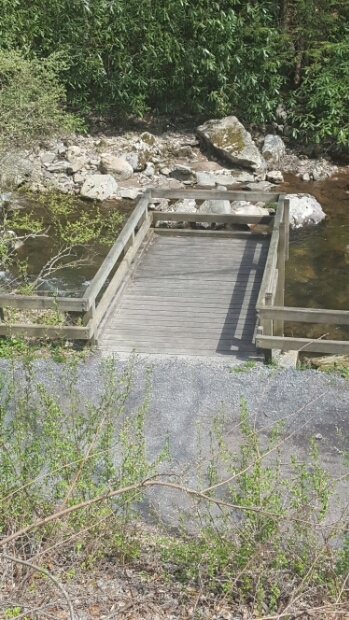 There were a few docks to fish from. Each dock had someone fishing from them with mid-size poles. A sign read, “fish less than 12 inches toss back.” A tall bridge was visible. 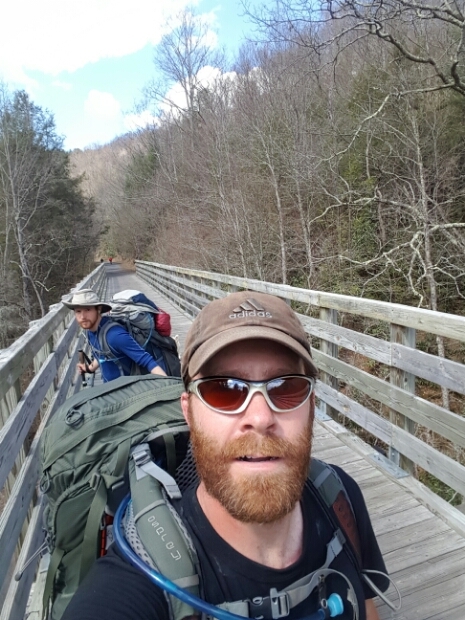 Crossing a very tall bridge led to a shelter site.

Consulting the all-knowing guidebook, a shelter was decided on. Once there, ramen noodles, chocolate fudge rounds, and other amazing foods were eaten. Each bite was an exploratory sensation for the mouth as if it had never been enjoyed before. Exhaustion set in along with full tummies, nightime embraced all as it turned out the lights once more.