A lot of noises could be heard early. Deciding to get up, digging around in the food bag, beef jerky and oatmeal came to the top and was eaten for breakfast. A grape flavored drink add-in was poured into a water bottle and shaken vigorously. After downing these unusual concoctions, the morning was ready to be tamed.

Hiking for an hour on a cool lightly breezy morning, the dirtway turned into large boulders. These were much taller than could be stepped up normally on. This took some finesse. To make even more of a challenge, a few foot tall roots were entwined around each boulder step at key foot placements.

Each drop of the foot was painful. The height of each drop was way taller than usual. Finally, the path shifted environments. It smoothed out mostly devoid of rock and roots. Reading a sign that said “Elk Gap” inspired thoughts of an afternoon nap.

Packs were dropped with a hard thud. Boots came off and almost an hour of sleep went by. The mild breeze cooling off the day’s heat was undeniably comfortable. Waking from a lion nap needed slumber, the dreaded walk was about to start.

When too long of a break happens, (more than 15 minutes) everything stiffens up and it is very difficult to get moving again. It’s like watching someone act like they are walking on hot rocks even with boots or shoes on. A sign was in the distance.

“Horse path” near the water was determined. Nearly 3 miles left before the shelter was to be seen. Some stone steps were around the corner. This overgrown foliage-laden path was gnarled with roots. Each boulder step platform required a precarious balancing act. Step heights varied from 3 feet or more.

After almost another intense hour of travel, a light brown meadow could be seen. This was an unobstructed vantage point. The shelter was located and it was decided to move on. A fire ring and nearby tent sites were picked and looked very cozy. Nighttime soon ensued after settling in. 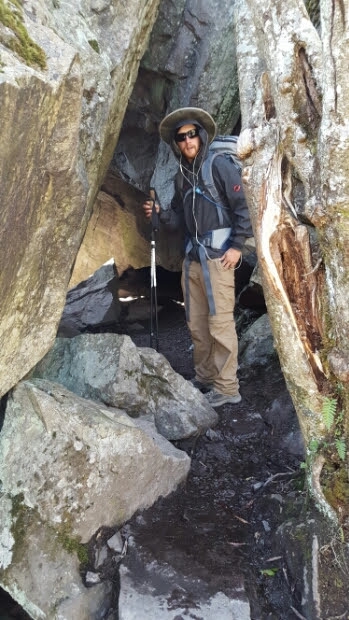 Surveying the new morning surroundings, a cave could be seen. Decisions. Through the cave or around the outside? The cave!!! Navigating through the short 20-foot rock tunnel opened up quickly on the other end. Some horses could be seen off in the distance.

One of the horses was nearby content munching on its foot tall grass breakfast. A woman thru hiker could be seen petting one of the horses. This horse seemed very content. Its head stood about chest high to a 6-foot person. Noticing every color combo of horse imaginable were scattered everywhere.

The horse moved on and a conversation was struck with the thru-hiker about the horse. She said she didn’t go anywhere near the horse and it came up to her demanding attention. These thoughts were unusual. True? Not? Hmm. 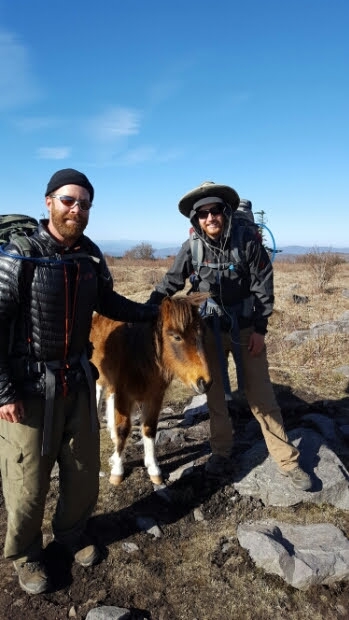 Turning to talk to Branden, a headful of hair was placed in my hand. Thinking it was the woman being playful, I slowly turned around. The same horse she was just talking about placed its head so it could get scratched.

Moving up about 10 feet, the horse again persisted. The half-size horse was petted and scratched while posing for a picture. Moving on, an actual restroom was found.

Break time can be anywhere that is comfy. Grass is so soft. A family pulled up to the parking area nearby. Relaxing and laying back on the pack was perfect. The clouds floated briskly by in the blue sky. Spending an hour here, it was time to go.

Hiking for a few hours a shelter could be seen that was swarming with tents and boy scouts. A conversation was struck with a scout leader. Asking, “which way was the AT?” The man pointed a way and said to turn left then right at the opening, you can’t miss it. Thanks were said and the journey went forward.

Normally the path is marked by white blazes to show a person the correct route. These were not seen here. Going on 4 different routes devoid of white blazes, an hour goes by.

Ending up following a rocky laden horse trail, a few horses tied to trees, and some people resting in the shade could be seen. Directions were asked how to get back to the trail.

Directions were followed of a right, a left, a left then right. (This was humor, not known at that time, to go straight) Another decision had to be made. There were 3 choices. All routes went off in the distance in different directions. Choosing wrong twice, the final route got back to the AT.

Checking the clock, it was near 6 pm. The shelter could be seen and was jam-packed. Ughhhhh!!!! Consulting the oracles (book and app), a site a few miles ahead was the new destination.

Almost 19 miles yesterday makes exhaustion a friend. Nearby sounds of stomping, snapping limbs, and leaves were being stirred. The monster was nearby. It was engulfed in shadows. It appeared furry and its head slightly rounded. Woooohhhhfffffffpphh came from its direction.

Getting a closer look, the white glove (whitetail deer wandering off. Its tail resembles a white glove waving goodbye) was seen. The shelter wasn’t far off.

Order pizza at a shelter?

Rumors of a place that had showers and pizza delivery was only 5 miles off. Arriving a few hours later, some of the info was true. Showers were freezing cold (collected nearby because no power or water heaters are at shelters). Showers were frigidly danced in and around to accomplish the task and pizza was ordered from the phone at the visitors center. This was about .1 miles away. Nightime blanketed the surroundings and morning soon came.

While waiting, a sugar fest ensued. Chocolate licorice, gummy worms, sour and sweet candies all changed hands. The shuttle appeared and returned everyone to the visitors center. Goodbyes were said.

After moving along, a stream was about to be crossed. The heat of the day was peaked and it was humidly hot. The hats were dipped in the frigid waters and placed back on heads. A few screams escaped as these temps weren’t expected.

Wondering what happened, an exam was conducted on the faulty pole. These were tri fold snap lock poles from Black Diamond.

One of the 3 joints (each joint has a smaller tube that each section slides over. This tube was now wedged inside flush with the other main section. No attachment point was available now.) was no longer secured in place, what was going on?

Speaking with customer service, another set of poles was to be sent ahead. After a few miles, a house could be seen. 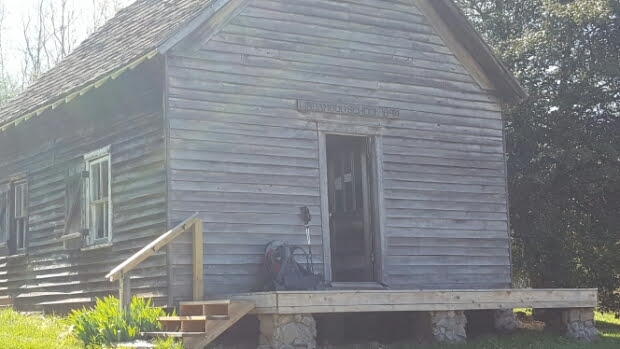 Back in 1895, this was used as a school. A list of infractions and penalties was displayed on the wall. 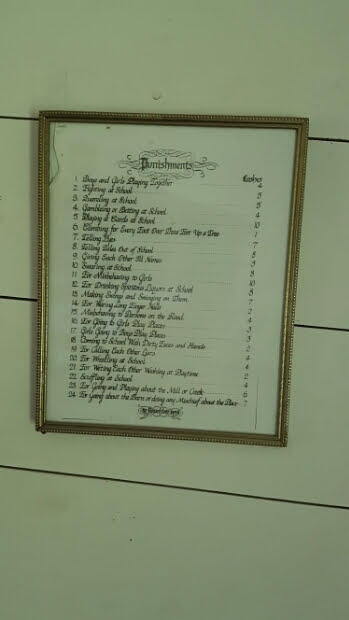 This had a few boxes full of medical items, food, and drinks. 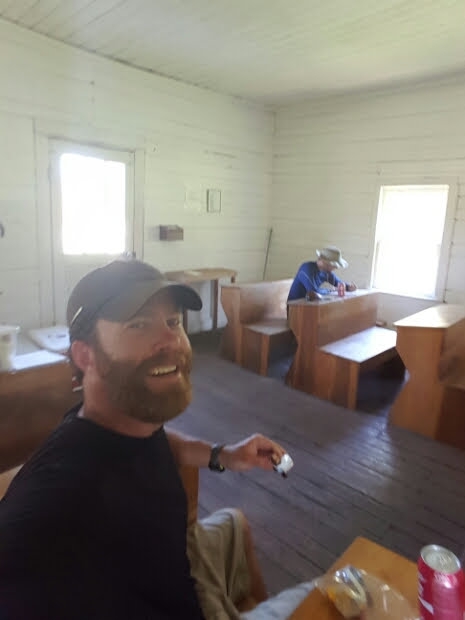 Almost an hour passed unknowingly. Sodas, chips, and candies were devoured.
Needing recharging of electronics and other stuff, it was decided to stay in Atkins, VA for this night.