As 5:30 AM hits, the unavoidable, waking up early happens. Heading to the office and getting some coffee starts the morning perfectly. At about 8 AM, the Country View Lodging owner, Wayne, shuttles us to the mile 909.9 Park Entrance Station. Heading up the path, dense, dark green heavy laden foliage paths are climbed. 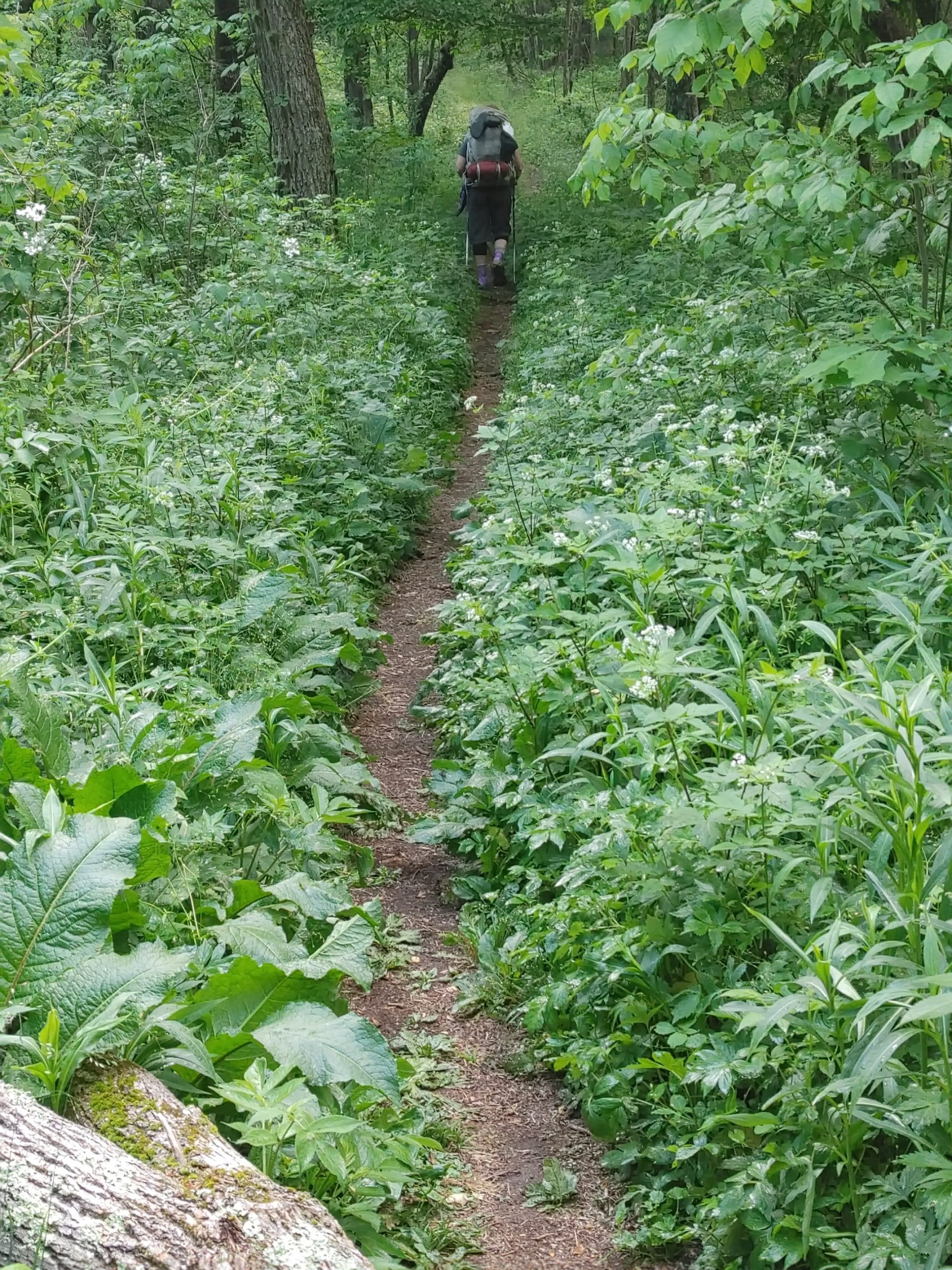 Mostly hiking for the day. Another 8.1 miles are walked to the Lewis Campgrounds. Filling up water, buying pepperoni sticks, Snickers bars, Naked juices, and protein drinks passed some time. We sat outside on some wooden chairs on a deck, enjoying the campground. Descending the final miles to Bearfence Mountain Hut, it rains very heavily.

After walking in the soaking rains, the hut is reached and the rains stop completely. “Really, you had to rain on us like that for 10 minutes?” This is tonight’s home.

Getting started at 7 AM, an hour passes by hiking a mostly rocky path. 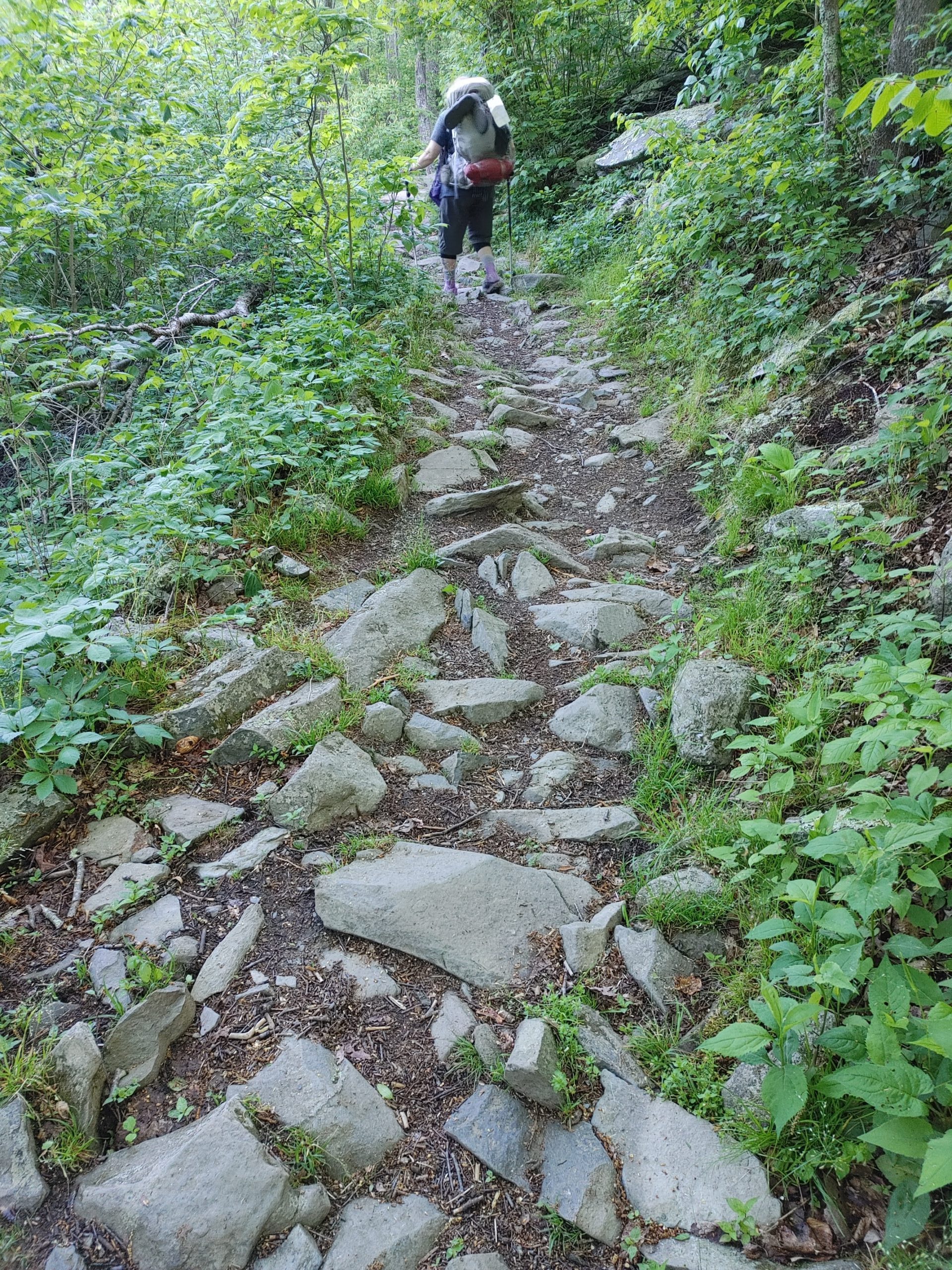 A few more hours go by and BlackRock Viewpoint shows up. A long ways can be seen. This is just before the Big Meadows Lodge. 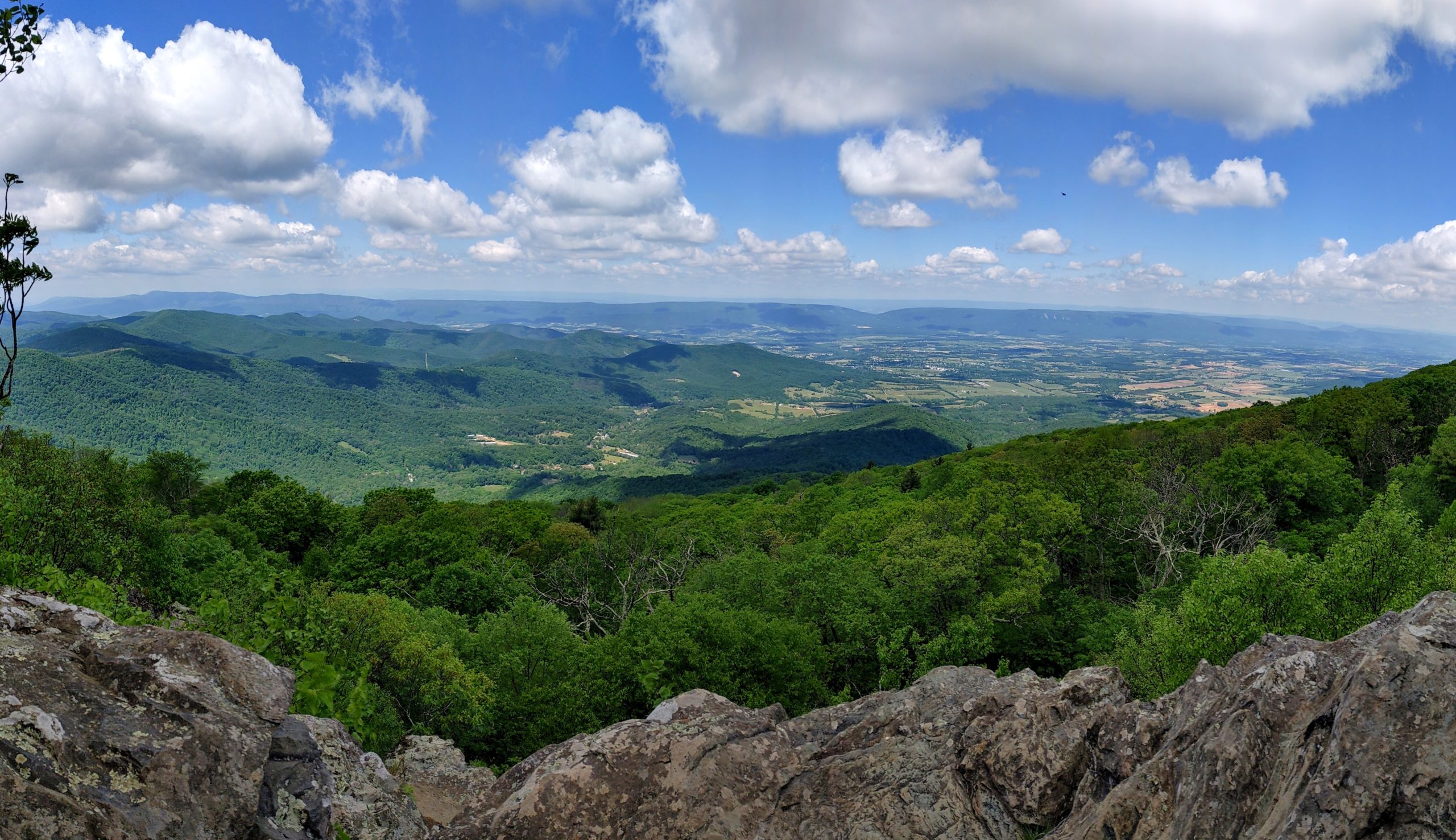 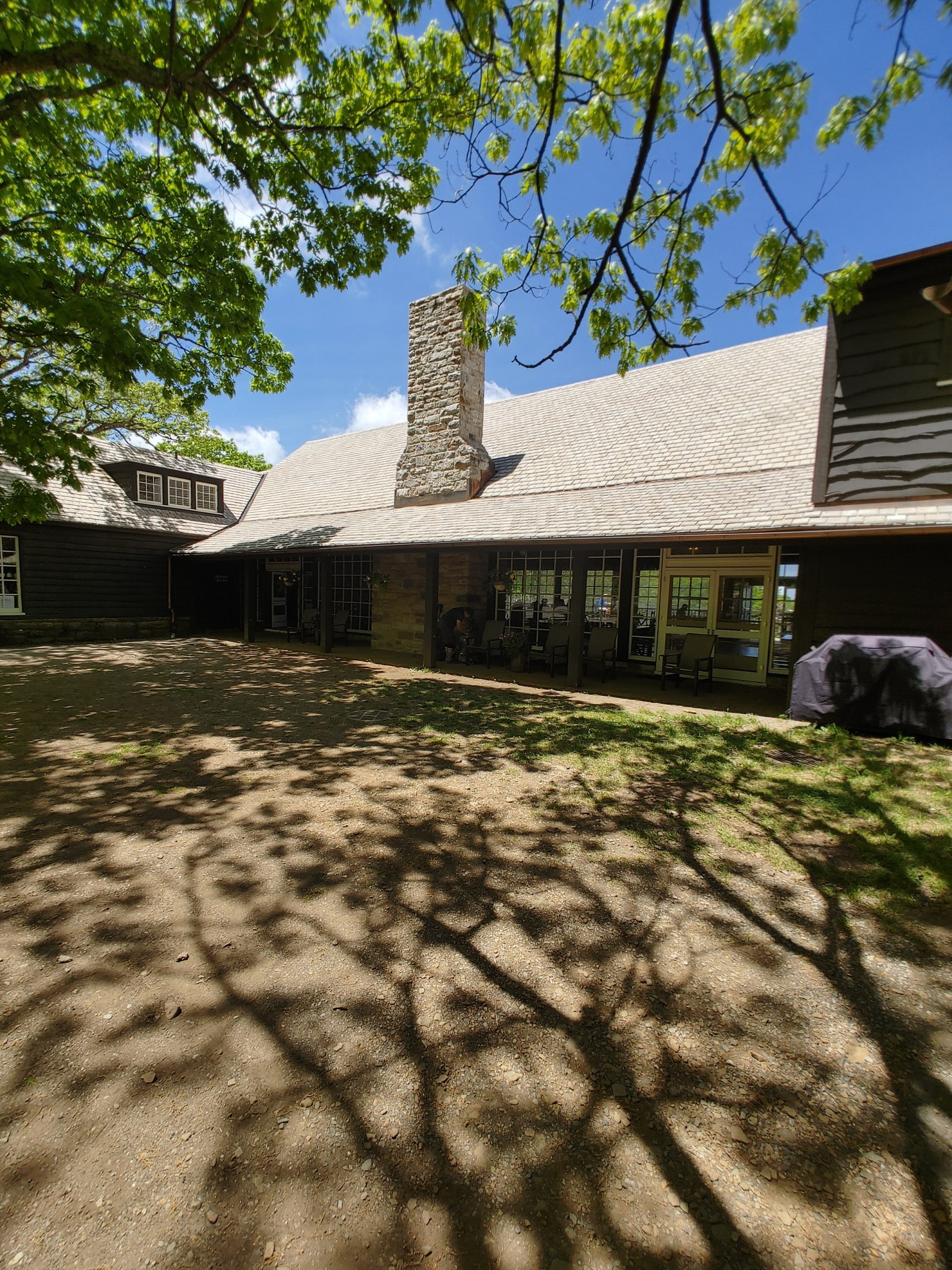 Continuing to Big Meadows Lodge for lunch was thought of nonstop. After getting there, the lodge wasn’t open just yet. We had to wait an hour. Being seated after opening, burgers, iced tea, fries, potato cheese soup, and salads were ordered. Shortly after finishing, the next view was headed to. Some cliffs were nearby. 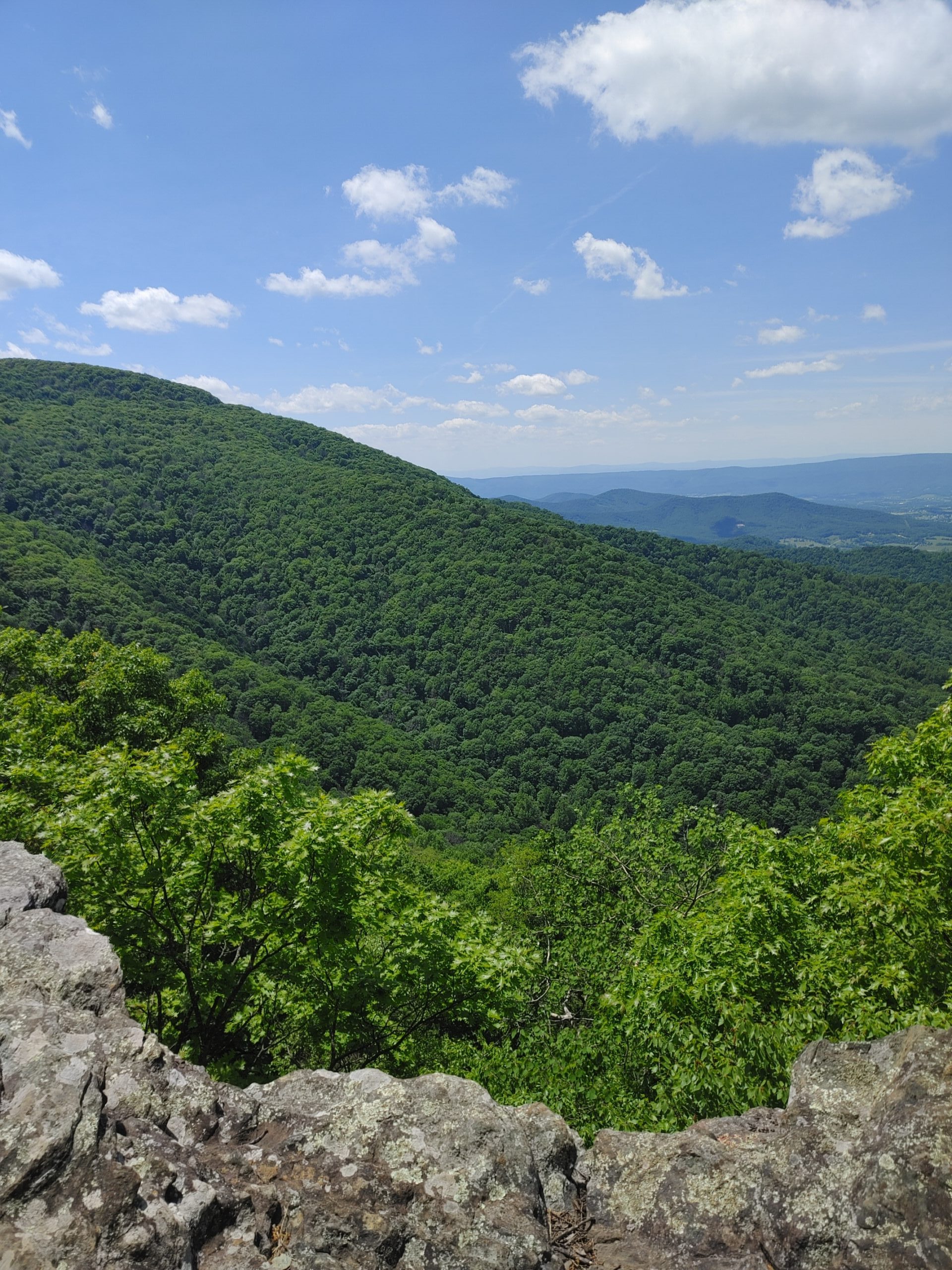 Descending the final miles into Rock Springs Hut, tents were set up and a rentable cabin was noticed on the way down to the water spring. Later, a section hiker named Veronica (teacher in Waynesboro) was out for a few days enjoying the Shenandoahs. It was just 3 of us here all night. This was home.

Starting at dawn, 1.8 miles was hiked to a rocky formation. It looked like a stone giant’s tooth. 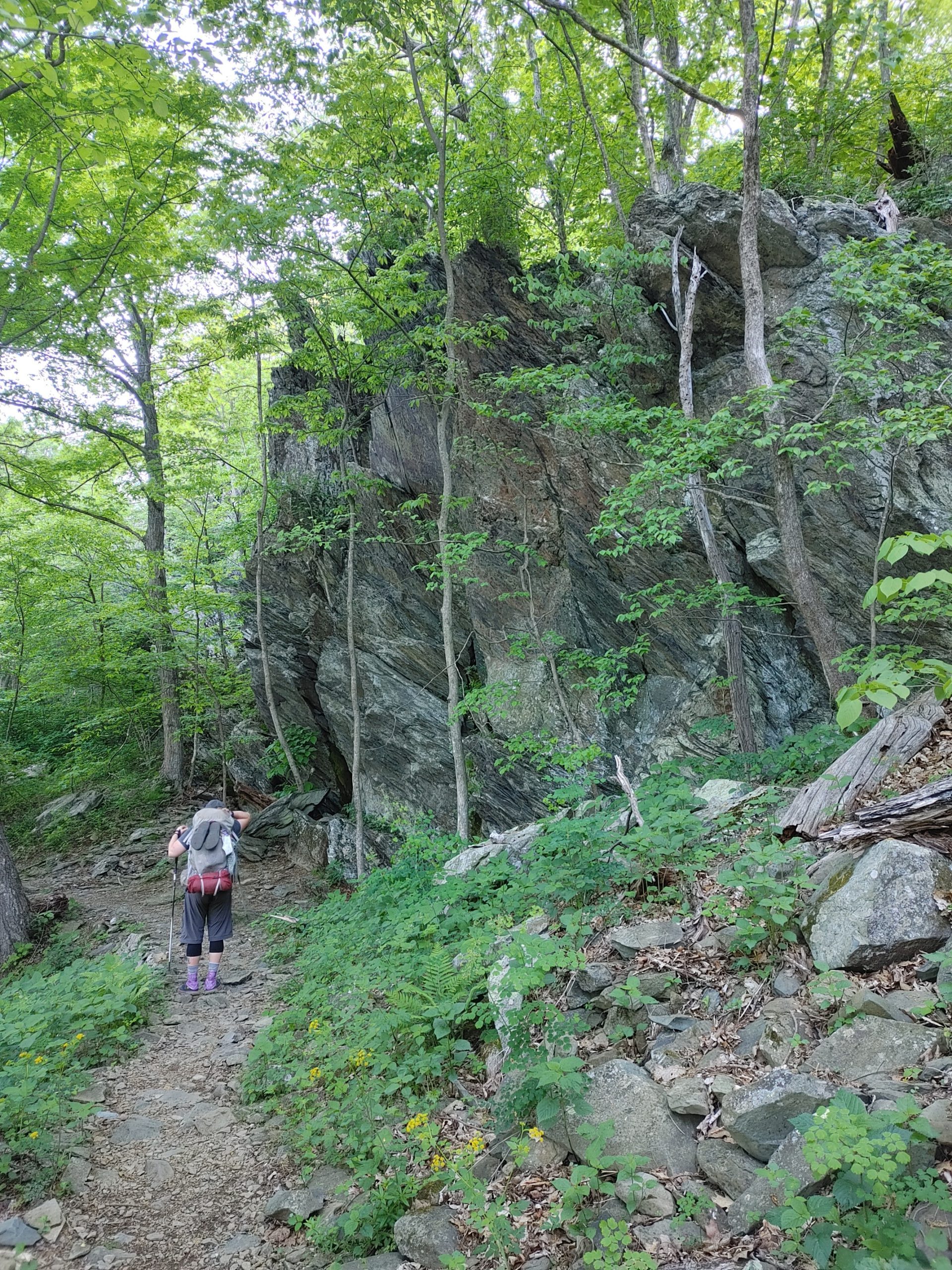 Moving on another hour, a rocky overlook was used to take a 15-minute break. Packing up, almost a mile was walked when a Horse Stable was seen in the distance. It was labeled rides. Horse trail rides would have been great at this time. Off to the cliffs via the 1.5-mile detour. 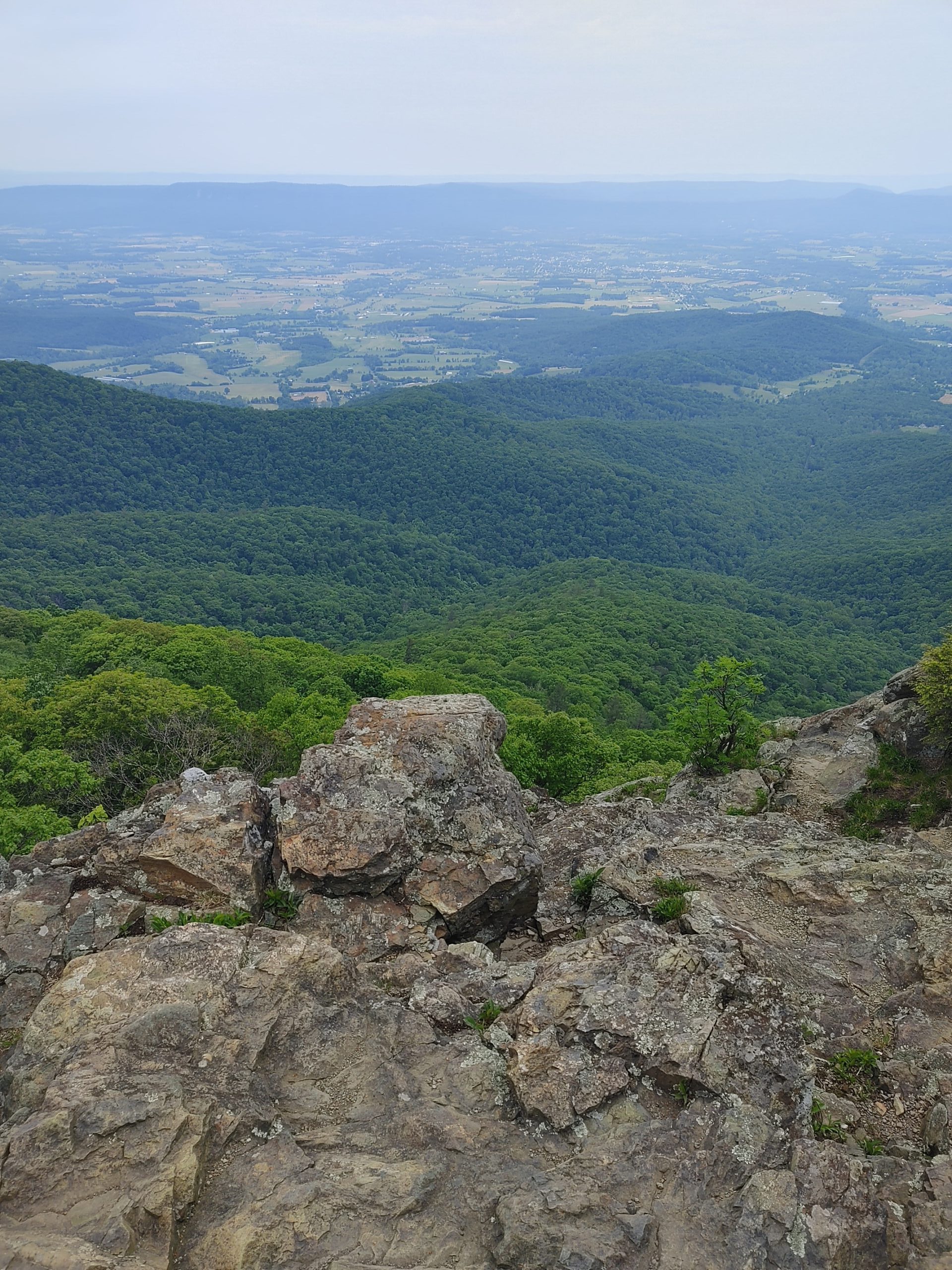 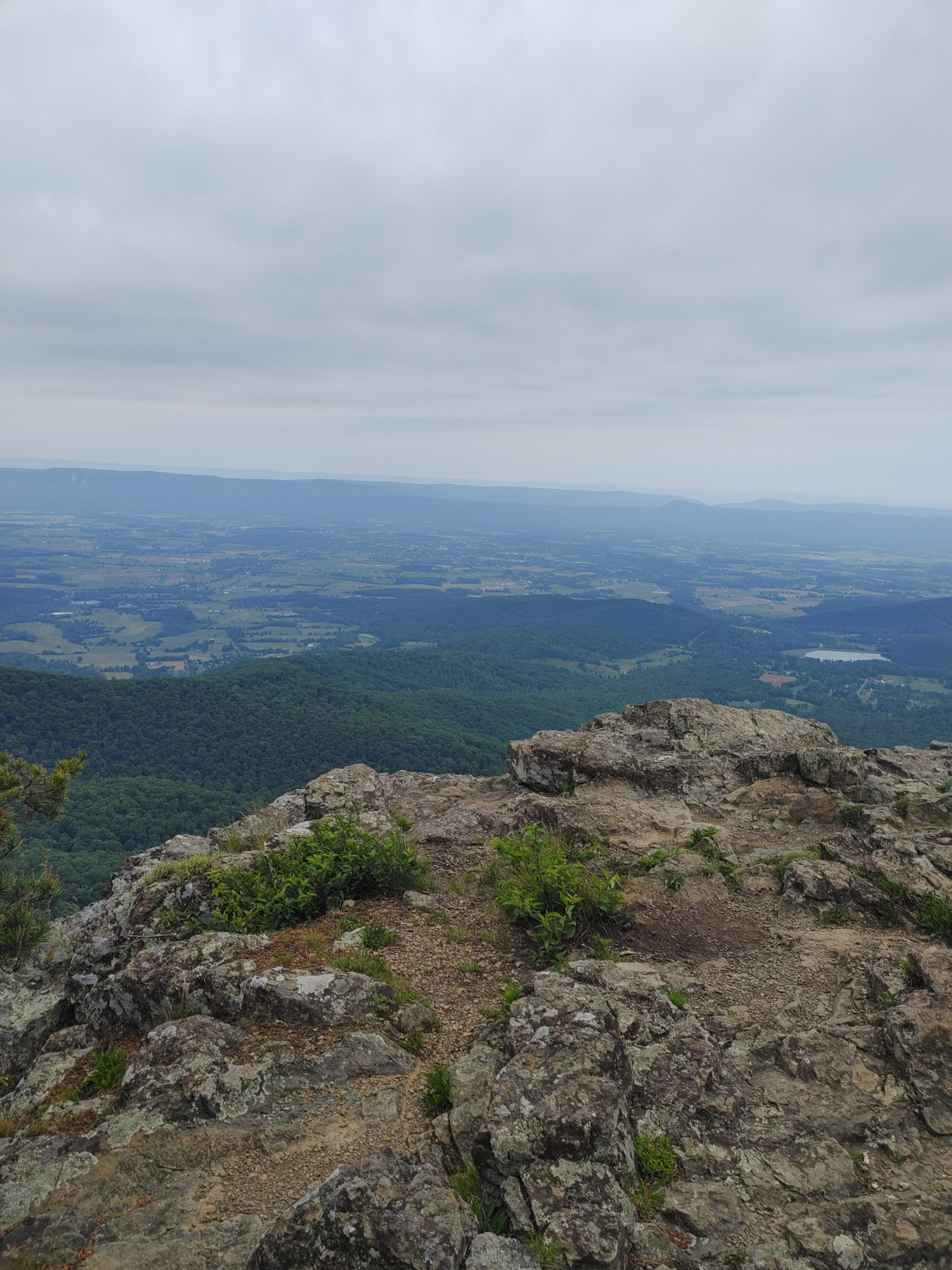 You could see for many miles in almost every direction. Taking all this in, break was over and the picnic grounds were next on the list.

8.5 miles in, TSquared stops abruptly and then backs up slowly. Asking, “what is it?” “Snake or something else?” She turns slowly, says nothing and points up the trail about 40 yards or less to a very large black bear by a tree trunk. 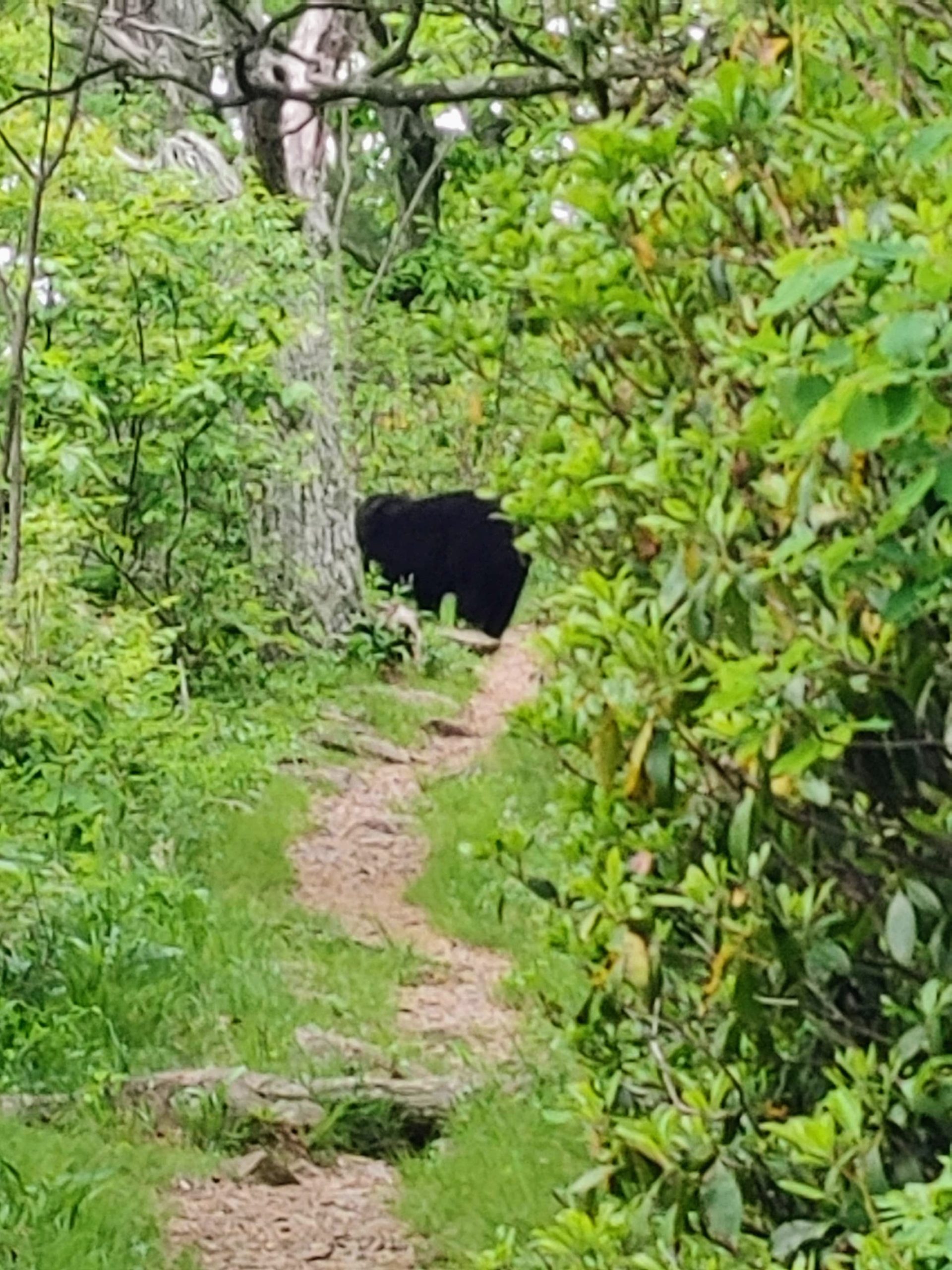 A quick photo is taken since the path is temporarily blocked. She smacks her poles together loudly and the dark figure scaredly takes off with no sound when it leaves.

Waiting about 5 minutes, the distance is closed to where the bear was standing. This was a few hundred feet just before the entrance to the Pinnacle Picnic Grounds. Moving into the picnic grounds, a worker is notified of the bears proximity. Grabbing some water from the fountain, the next overlook is nearby on the way to the shelter. 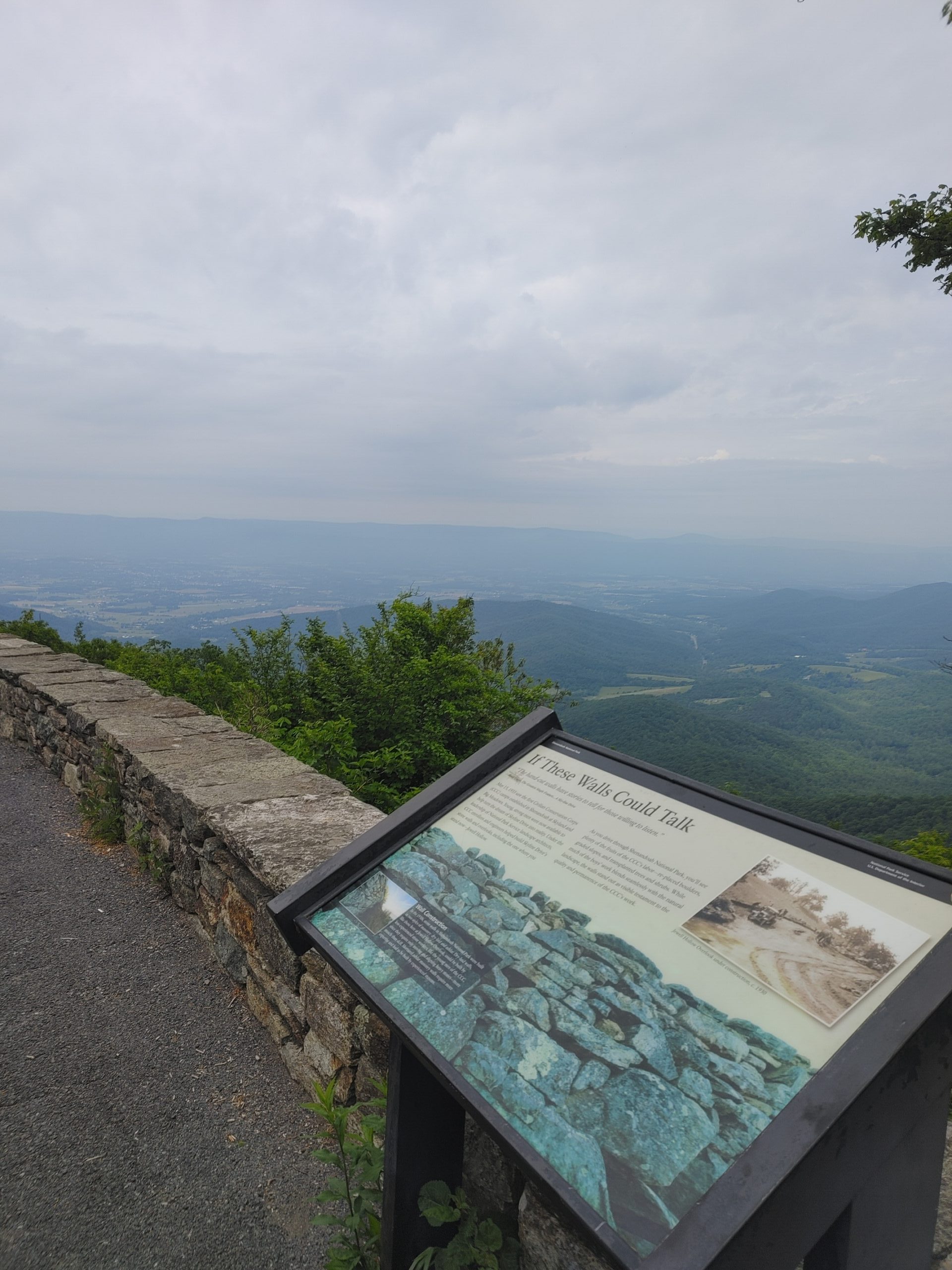 Byrds Nest #3 Hut is going to be home for tonight. The water is a quarter-mile straight down an old driven road to a pipe with great water flow. Sleeping in the shelter was decided. This wasn’t the best idea because some day hikers dropped off sausages, buns, condiments, chips, and other stuff to eat for people who hadn’t shown up yet.

Trying to sleep around 730 PM or so due to exhaustion, extremely loud groups show up snapping tree limbs for a fire inside the shelter. They get a fire going and start grilling sausages, baked beans, and smores later.

I am thinking, “in bear country, really?” Hands are dusted on their sides. They are trying to get rid of the nacho cheese sticky chip dust on their hands, which brings mice in the morning. As it quiets down around 930PM, sleep finally takes over.

The rainy morning starts and Marys Rock is headed to, but with the dense fog, nothing can be seen. It is a slick, rocky descent of 1200 feet to Thornton Gap. The miles are traveled and pickup is awaited for an hour in the frigid rains. After a while, the shuttle shows up and takes us to the Open Arms Hostel. A nero and zero are spent here. The Hiker Bus was here!!! 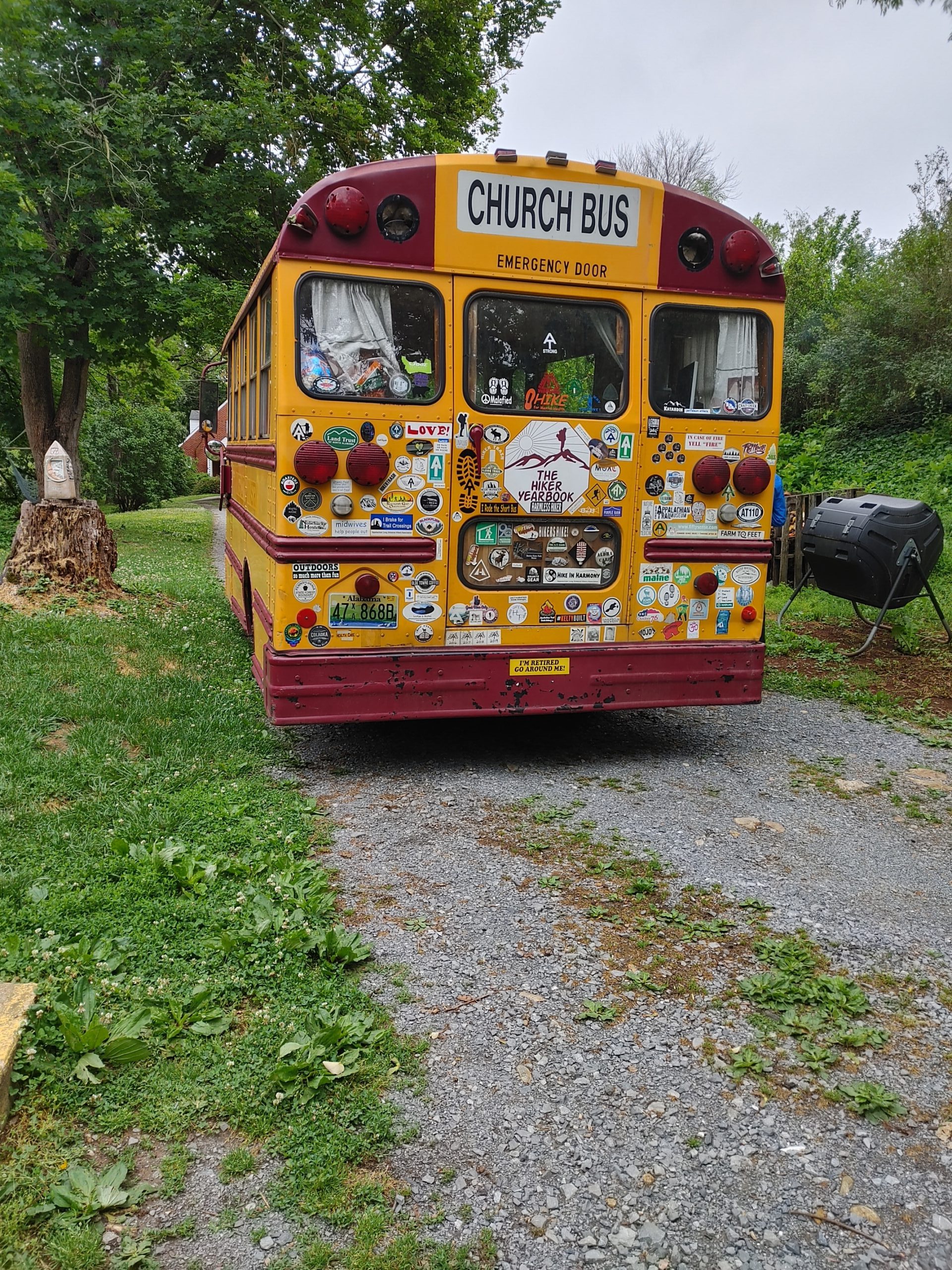 The Gathering Grounds are headed to for breakfast. It is a popular restaurant. After waiting for 20 minutes, we were seated and ordered food. 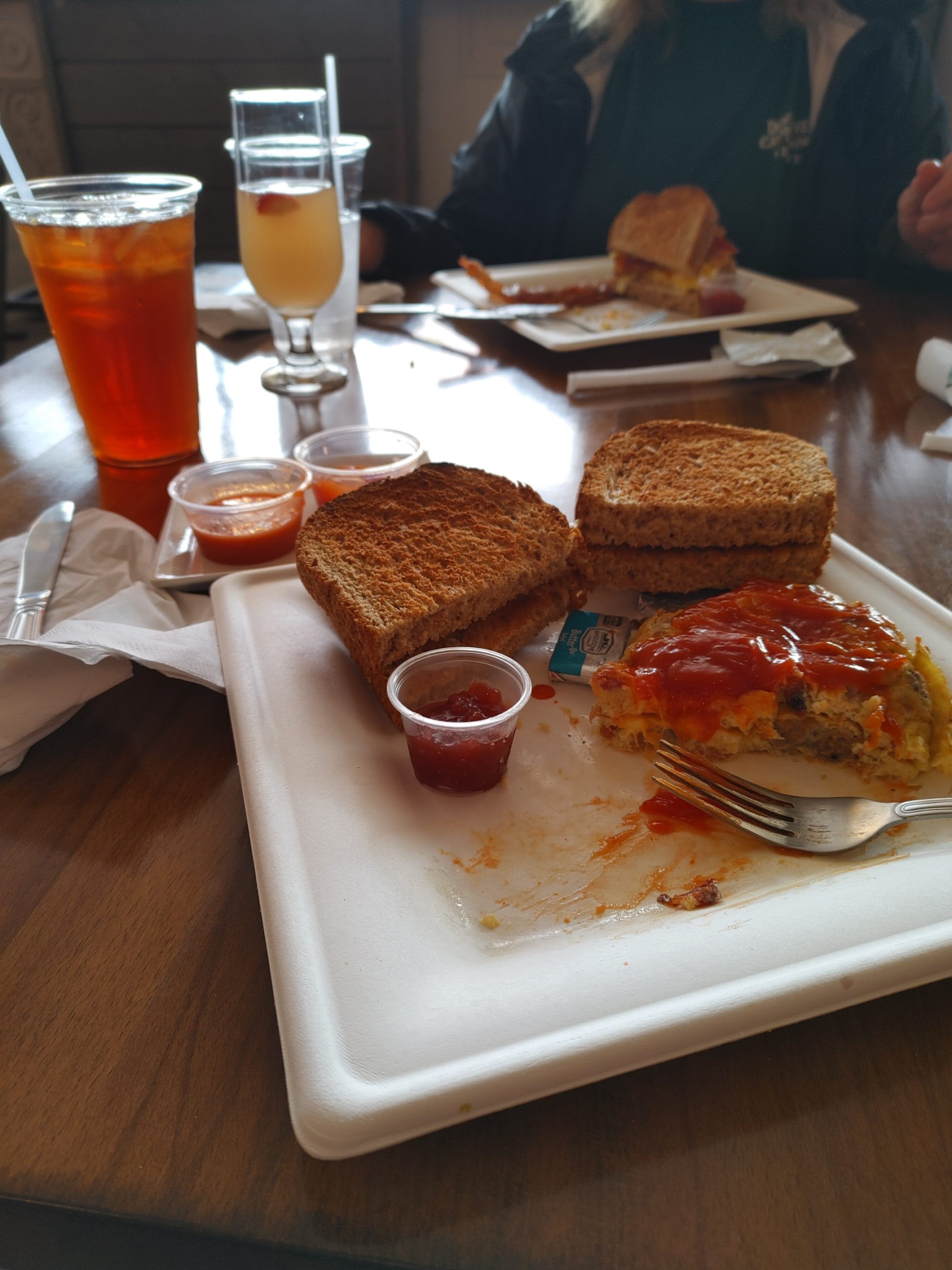 Finishing up and very satisfied, the outfitter was visited but didn’t have the inflatable pillow being looked for. We headed back to the hostel for a bit.

At lunchtime, we went to Jess’ Main Street Bar and Grill. Maple joined us for lunch. Burgers, cider, fries, chili dog, and beers were ordered. The skies downpoured. The shuttle was called. Allison wanted a chili dog to go, so that was ordered all in perfect unison for when the ride arrived. Forwarding to the next day.

Around lunchtime, Mexican food sounded good. Rancho Viejo was traveled to on foot. A few combo specials were ordered and were very satisfying. 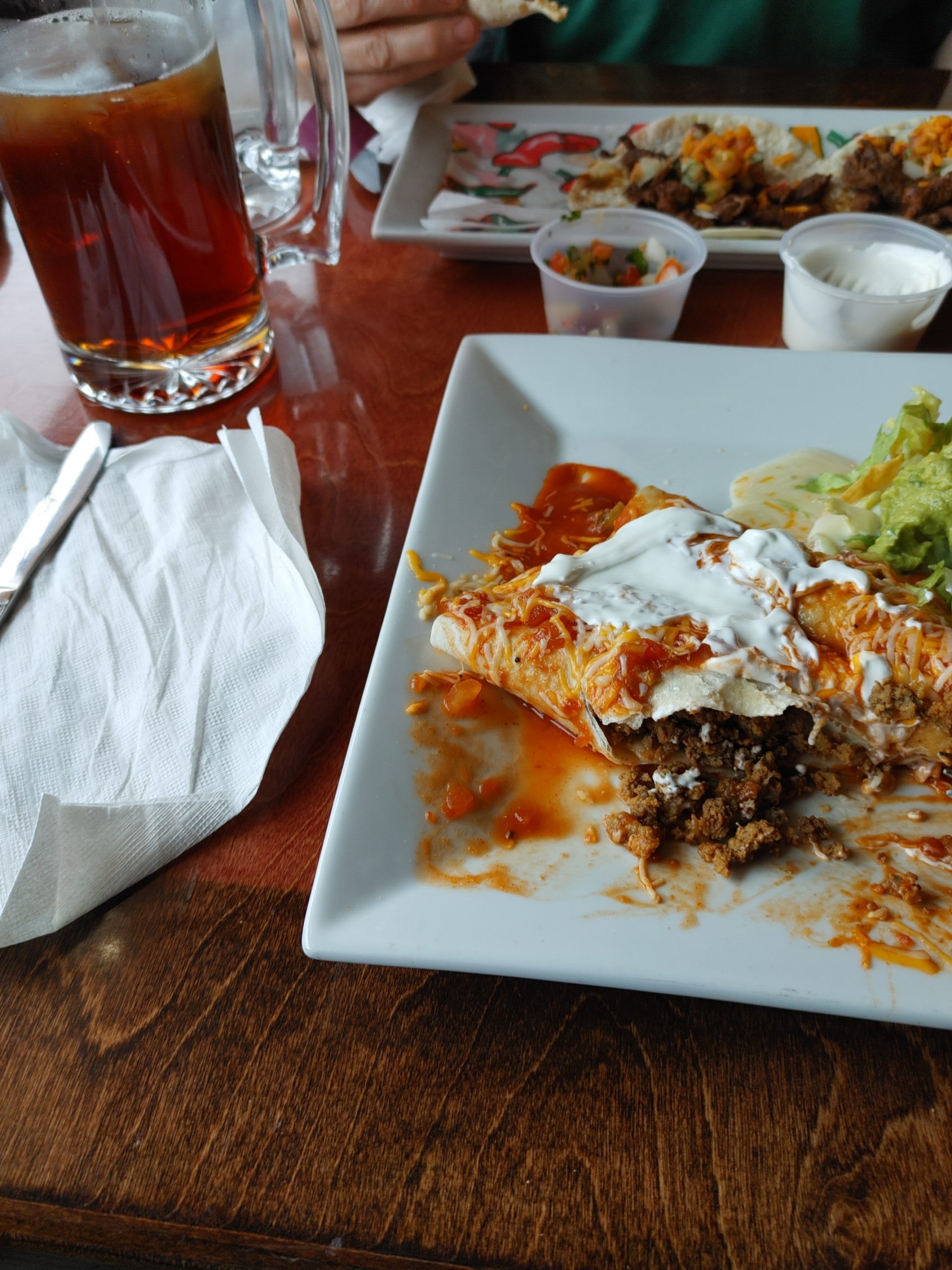 Later, back at the hostel, dinner was ordered family style from Dominics. Pizza, cheese bread, minestrone soup and a few other items were delivered. About 6 of us sat at the table chatting. We talked about where people were from, which hiking directions, what they were doing here, and more. Fast forward to the next day.

After being dropped at Thorntons Gap, 8.6 miles was hiked to the Elkwallow Wayside. It was open!!!! This had extremely reasonable resupply options and a kitchen from which a burger, 2 dogs, and 2 blackberry shakes were ordered. Devouring these wonderful things, restrooms were visited prior to moving on.

2.8 miles were traveled to Hogback Overlook. 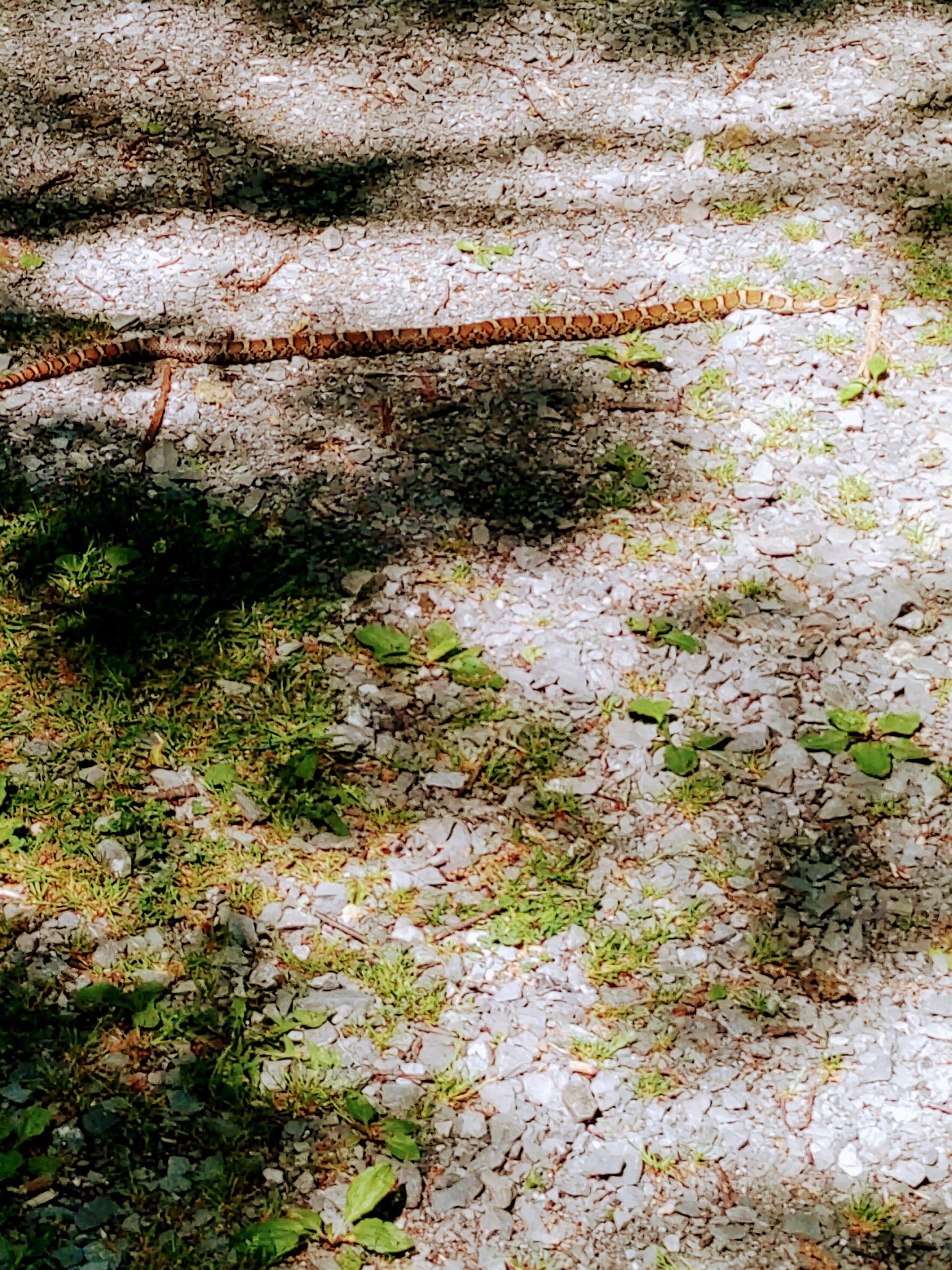 Crossing the street, a snake was seen. Copperhead or milksnake? Taking a pic, the final mileage was done to Gravel Springs Hut. This is the northernmost hut in the Shenandoahs. Home was made here.

As morning came earier than usual, the day needed to be started. Walking a mile and also 1.8 miles, the Cliff Overlooks presented themselves. Moving upwards 6 miles in, TSquared stopped suddenly and backed up. A rattler was seen laying across the path. 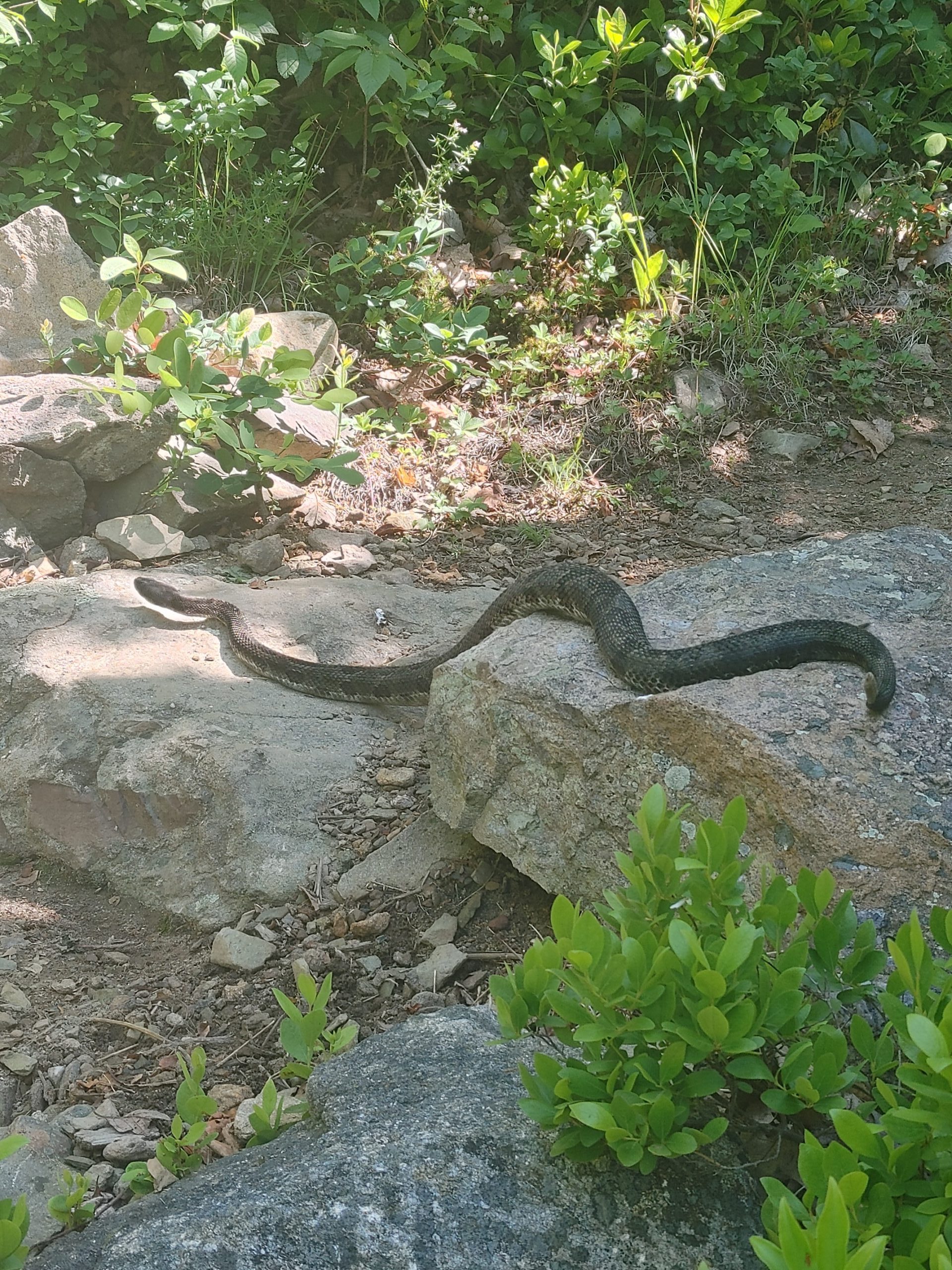 Waiting for it to slowly move away, 9.8 miles in, a sign read “Shenandoah North Boundary.” Moving forward, Tom Floyd Shelter was next up. On the last half mile to the shelter, a very large tree was recently downed and shattered all over the path. It had to be crossed over twice and under once. Finally, Tom Floyd Shelter could be seen. This was home.