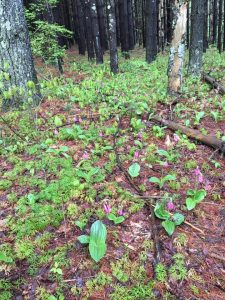 My mother and I spent time resupplying, getting some missing gear, and I gave her a bag of cold weather stuff I didn’t think I would need anymore (about 5 pounds).  I also bought new shoe inserts which has made a huge difference on how my feet feel.  Not a lot was open for dinner so we ate at the Inn and got some shrimp and grits. The next day we left my pack in the hostel and I took a small day pack to use for the day.  My mother drove us to a point on a Appalachain trail crossing 16 miles north of Damascus.  We walked with the dog about 3 miles together to where the trail goes onto the Creeper.  We said goodbye and I continued down the trail a little quicker and a tad more lonely. Hiking the opposite direction is weird; I was running into so many people I knew.  It was cold though so I couldn’t stop for long. With a few miles left it started raining hard and with only shorts on I soon became super cold.  I was trying to keep moving but after putting in 13 miles your feet start to hurt but there was no where to stop in the rain.  I made it back to the hiker Inn by 6 and was cold for about two hours before taking a hot shower. A dude named hopper wanted to grab some food so we walked in the rain to Bobos and grabbed beer and calzones. The playlist there had a lot of good songs and we stayed till they were stacking the chairs on the tables.  Then it was time to sleep in my bunk which was super comfy. 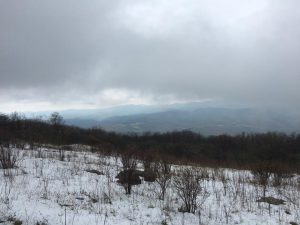 Snow in May
The next day I grabbed breakfast and took a shuttle back to where I had started the other day.  I headed up towards Whitetop mountain and saw a ton of lady slippers.  After two miles in I started seeing snow, and the accumulation grew as I went up. Soon the ground was covered by 3 inches and the trail was wet and sloppy.  I found some girl section hikers on top who were really nice but struggling with the cold, snow, and wind.  It started raining/hailing on my way down.  I got to Elk Garden where I’d planned to eat lunch and the sun came out.  The girls arrived and suddenly it started raining.  It started raining hard.  A few of them ran to hide under the roof of the bathroom in the parking lot and I did too.  We brought our packs over and were squeezed in outside the bathroom door.  Lord bearclaw showed up and we decided it might be even warmer standing inside the bathroom itself so about four of us went in there.  We were in there for awhile and it wasn’t as bad as you’d think it would be until Bearclaw said he was feeling sick and left.  We followed him outside (it was still raining but not as hard) and tried to make him sit down but before he could, he passed out.  When he fell I was scared.  He didn’t look like he was moving and we struggled to turn him into a sitting position.  He was cold so one of the girls covered him with a rain tarp and we waited with him.  Soon he was able to get up and the rain had subsided so he went to set up him hammock since he didn’t want to go up mount Rodgers without winter gear (he’d sent all his home).  I had sent some of my warm stuff home as well and didn’t want to get hypothermia (the cold rain in Damascus had almost done it the other day).  I figured it would be colder 1000 feet up and I’d be safer doing the miles another day so I set up camp too.  When I was getting water more hail and rain came but we were still able to have a fire later anyways.  Someone finally showed me how to recognize and pick real ramps (I thought wild garlic was wild onions before) that night and I added some to my couscous which was delicious.  It rained more that night and I was pretty happy with my decision to stay. 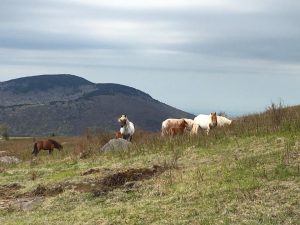 Ponies
I got to see some ponies the next day.  I had done this trip a long time ago but I wouldn’t mind going to mount Rodgers more often.  The climb up was a little rough because the snow melt caused the trail to be stream like and my socks and shoes were soaked.  I did see some ponies on my way up and walked off the trail to get a little closer. I got to Thomas knob shelter and realized my wet socks were forming a rash around my ankles and it was causing a lot of pain.  I walked through it slowly into the Graceland highlands and caught up with trail talker who kept a good pace as we chatted and saw more ponies pretty close up.  Basically if you haven’t been to the Graceland highlands it has grassy hills with cool rocks on top and a bunch of rhododendrum trees.   At mile marker 500 we both yelled in delight and took each others’ pictures.  I stopped to grab a bite to eat but then it started raining, and then it was sunny, and then back to raining with the sun out.  I made it to the shelter and there were ponies there!  One even let me pet it and I swear I had a new friend for half an hour.  I got to stay in the shelter that night and even though it rained I was finally warm again. 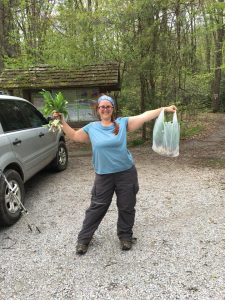 I saw my dad on Mother’s Day
I got to see my daddy the next day!  I woke up excited but took my time getting ready.  I walked with trail talker towards scales.  There were longhorn cows along the way but as soon as we got into the open right before scales it got super windy, maybe 50 mph winds.  I saw my dad and the dog and ran to them and then we quickly walked through the wind down to the car.  He was going to slack pack me 5 miles so he gave me a day pack and the dog and I got back on the trail.  The dog didn’t want to follow right away but got the idea eventually.  The forest was full of pine and downhill without a pack is a lot nicer on the joints.  About a mile from then next road my dad met me again and on our way down I saw some ramps and my dad saw there was a whole thicket of them so we started picking.  We must of been there for 20 minutes but got a whole grocery bag worth and called it quits when we didn’t think the bag would hold anymore.  Figured he could deliver the ramps to mom for Mother’s Day.  We got down to the road and ate a packed lunch from home and he walked another mile with me up hill.  He gave me some ideas on where to camp and the we said our goodbyes and we went down different sides of the hill.  I made it to the shelter at around four but with some energy reserves I decided to keep going to this waterfall my dad had mentioned camping at.  I collected water for the night and saw a campsite but figured I would push for the waterfall still.  I was feeling great till I got there (it was pretty but I didn’t take a picture because I was upset), no camping.  There was a bridge and then the trail went straight up.  No flat spots whatsoever till I got another mile in and it was right next to dicky gap.  The campsite was not the best, my rope and bag separated when I threw it in a tree and I couldn’t see anything in the dark.  It was a super frustrating evening (after a fabulous day) but I felt proud to have one of my longest days under my belt.
Pizza pizza
Because I’d done 16 miles the day before there were only 14 to go to partnership shelter (you can order pizza from the shelter!).  So slow and steady I walked and even with breaks I wasn’t concerned about not getting there because I knew I would.  The terrain wasn’t that difficult and around dinner time I rolled in.  They have a phone at the visitors center so I called Pizza Hut and ordered a pizza and cinnamon sticks.  In an hour my food arrived and I did what damage I could saving some for breakfast.  I ended up handing out a lot of the cinnamon sticks to others at the shelter.  There is a shower there too so even though I had heard how cold it was, I took advantage of it.  It was a duck in, soap up, duck in again situation.  Afterwards I felt clean and refreshed.  There was even a nice campfire going to warm up at.  The next day if be hitting up Marion for food and laundry and I was pretty excited.
< Previous Post
Next Post >