Another looong day today. Easier hiking, but the day felt like it went on forever. It started out very misty, and cool. I summitted Standing Indian Mountain and the clouds would part just enough to give glimpses of what must be an amazing view, but most of the time I was inside a cloud, which was cool in its own way. Ran into Robby again, very nice guy. I turned one of my ankles today on one of the thousands of root traps along the trail today. I think it might be a mild sprain.

Not a great day today. It was SO COLD this morning! I did not want to get up at all, and Chris and I stayed in our bags in the shelter until almost nine. My ankle stiffened up overnight. I hiked all day on the sprain and was so focused on the path in front of me that I walked right past the shelter we were going to stop at for the night, almost an extra mile downhill, and had to turn around and come back up. I was so frustrated that I cried for a minute when I got there, which probably made Chris and Aly a little uncomfortable. My bad, guys.

Everyone else in the tramily climbed up Albert Mountain, but I had to blue blaze around because Noah wouldn’t be able to do the rocky climbs, and it wouldn’t be advisable to try with a sprain either. But, it was a little lonely. I already feel so attached to everyone.

It was so cold again last night! Long Branch Shelter had a big tarp over the front, so we were at least sheltered from the wind, but the chill was real. Noah didn’t want to get out of the shelter in the morning, it was so cold. 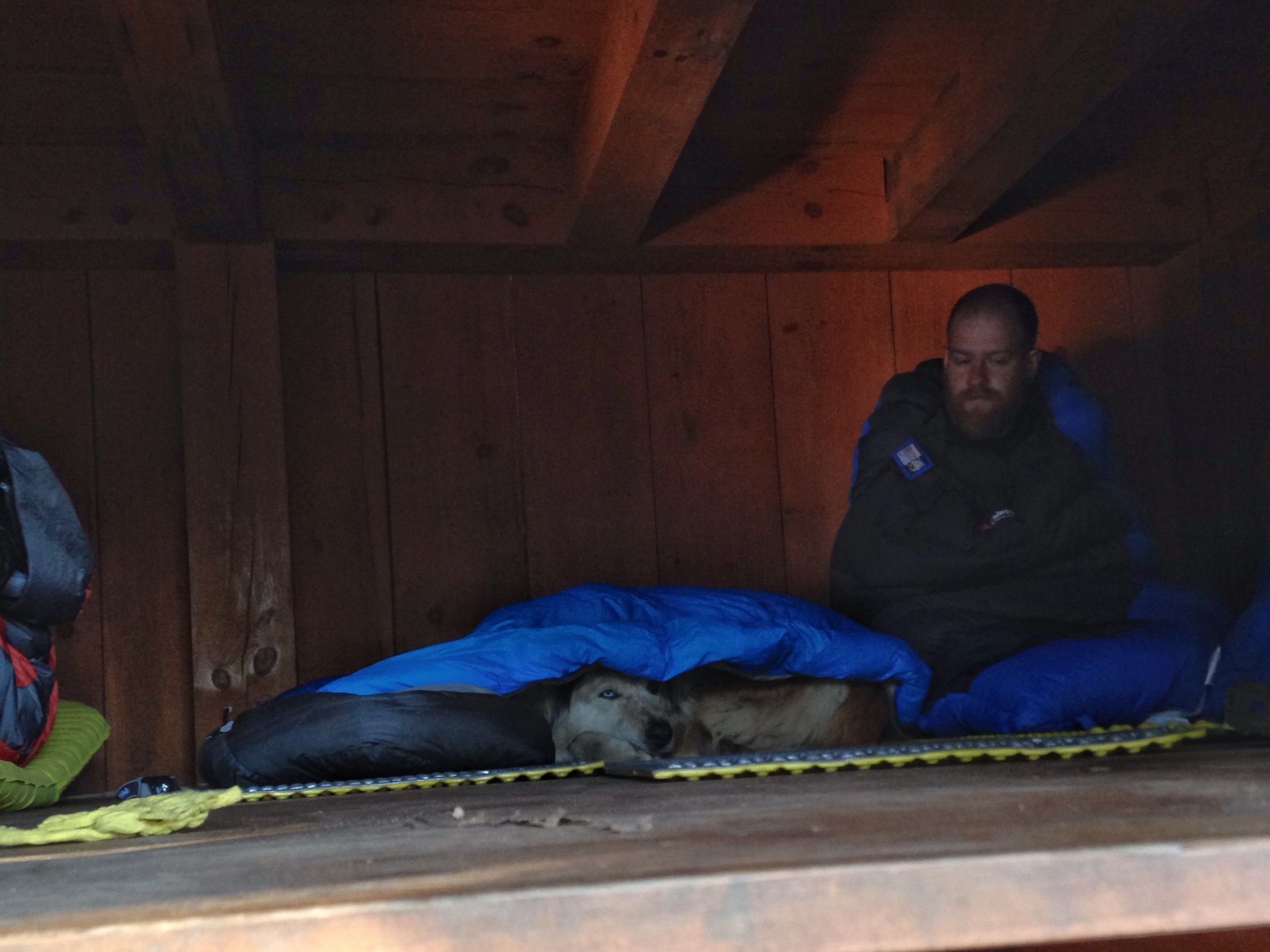 He’s got the right idea.

The few miles down to the gap went quickly. I started off layered, but took off my sweatshirt and jacket on the uphill, and when I started going downhill and got chilly I didn’t want to stop to layer up again. Pro tip: don’t be so stubborn. Put the jacket back on. It started sleeting and I wasn’t sure I could unclamp my fingers from my poles, but I got there pretty quickly. With a wrap on my ankle the pain was not bad and when I started getting cold I pretty much flew the last mile. There was a van waiting, courtesy of Ron Haven, owner of the Budget Inn in Franklin, and we all loaded in. He rented one of his hostels out to all five of us and Noah, and we were buckled in for a nero/zero combo.

What a glorious day. We were showered, laundered, and we pretty much plundered every restaurant we got into. Got resupplied at the local Walmart, ran into some real characters, and generally had a blast. Franklin is a beautiful town. Everywhere you look there are views. My recommendation is to try the Wesser Evil at the Lazy Hiker Brewery. Great stuff. The Sunset Diner is also amazing to hikers, they fed us loads of great food with wonderful smiles to go with it. There was a 50s style diner in town too, and the food there (oh man, can you see what I’m fixated on right now?) was delicious: huge portions, delicious sweet potato fries, ice cream desserts to die for…yeah, it was a good day.

I also made the final decision today that Noah will finish his hike with me at Fontana Dam. He has done really, really well, but as the temperature climbs he will suffer more and more, and after a couple of falls on some rock piles, I’m concerned about his ability to handle the rougher terrain ahead. I’m sad about it. He is my boy, and I love him so dearly, which is why it is important to make sure I’m making the decision that is best for him rather than what I want, which is for him to come all the way. Ah, dang. I wish I’d done this hike three years ago, when he was younger.

I feel like the nero/zero combo in Franklin made me soft. There were only 11 miles to hike today, but my feet were killing me after only five. No one in the trail family seems eager to do another one anytime soon, so we probably won’t zero again until after the Smokies. Robyn and I started the day today getting coffee for everyone else, since they were all asleep. The coffee shop on Main Street was closed until later, but there was some sort of festival being set up by the gazebo, and when we asked where else we could find coffee a man offered to drive us to a Hardee’s. I’m constantly astonished by the kindness shown to hikers around here.

When we got back to the hostel everyone else was still asleep, but coffee is a sure fire lure and everyone was soon moving. We packed up with lots of jokes and groans over our newly heavy packs, missed the 9:00 shuttle back to the trail, but got the 11:30 one, after Chris went out and came back with some amazing brownies for sale at the craft fair Robyn and I saw being set up earlier. Franklin was a gorgeous town, but I’m glad to be back in the woods.
The hike out of Winding Stair Gap was not bad, and Chris and I had lunch near the top of Silar Bald (we went the wrong way up the loop trail and turned around before the summit). The ridge trail between the balds is lovely. The walking here is pretty easy, which leaves a lot of time for looking around. The path is often only a foot and a half to two feet wide, with grass growing tall on either side, and clumps of bluets crowding into the trail and springing up from gnarled tree roots. Most of the trees up here look like dead trunks, with silver and gray bark crowded with lichens and mosses. There are some enormous trees bordering the path, probably several hundred years old, and they look as dead as the rest, until you crane your head way back–there are tiny buds just starting along the branches. With the sun shining down through the twisted silver trunks all around, the air in this place just feels bigger.

Noah and I reached Wayah Bald late afternoon, after a steep uphill, and pulled ourselves over the edge, sweaty and tired, to find a road and parking area. It’s always a little shocking to find that you have worked so hard to get somewhere and someone else just drove on up. We climbed up the stone fire tower there for a look around. The views were phenomenal in every direction, and after just being content to sit there for a little while, we continued on to Wayah Bald Shelter for the night.

Views from the Wayah Bald tower.