First fifteen mile day today! I seem to be the early riser in our group. I got up, brought down everyone’s bear bags, and discovered that a mouse had found its way into my trail mix during the night. Luckily nothing else was touched, but there go my snacks for the rest of the week. I woke up the others while my oatmeal was cooking. I left a bit before everyone, but any lead I might have had was obliterated after an hour because I lost Noah. He disappeared around a bend ahead of me, and when I got there he was out of sight. This isn’t that unusual, so I hurried to catch up, not realizing he had gone off the path to investigate something. When he hopped back on the trail he ran back towards the shelter, apparently looking for me behind him. I backtracked about half a mile when I didn’t find him ahead, and was reunited with him when the rest of the trail family caught up. Silverback said my dog was making a beeline back for the shelter, but he grabbed Noah, turned him around, and got him going back in the right direction. From the reunion point forward I fell behind again pretty quickly, but caught up at the watchtower on top of Wesser Bald. The stairs feel a tiny bit rickety but the view from the top is worth it!

Chris, Silverback, and Robyn on top of the fire tower.

From there, the trail had a lot of ups and downs until descending to The Jumpoff, a rock pile jutting out of the trees to give a good view of the mountains around the NOC and the water running through it. There was a hawk circling the air below me when I got out to it, which made me feel pretty good about the day’s work, no matter how ominously that point is named. Noah stayed pretty well ahead of me for the rest of the descent. I’d turn a corner and find him lying down in the middle of the path, waiting for me, or if I took way too long to catch up he would come trotting back to look for me. I just go so slowly on the downhills, and from our highest point to camp we lost almost 3000 feet in elevation, so I was a while getting there. The shelter here at Rufus Morgan is tiny tiny tiny, so I set my tent up instead. It’s a beautiful spot. The season feels further along down here. Mountain laurels are in bloom, there are more leaves on the trees, and everything just smells so green. I like it here, except that the poison ivy is further along too. It’s everywhere! I’m in trouble.

Today’s hike was interesting. One mile downhill took us into Nantahala Outdoor Center, a beautiful outdoor adventure campus with the river running through it. I bought a new halter top to replace the one I ruined (already!) with sweat and dirt. This one is darker, won’t show the damage so much…the AT is not easy on clothes. Then we all went next door to the River’s End restaurant for an AMAZING breakfast…I’ve never had potatoes so good. I tried to get the secret out of the waitress but she knows how to hold on to a good thing. After that we all walked down the river to a nice spot, skipped some stones, relaxed, and then hit the trail again for the steady five mile uphill to the summit of Swim Bald, and then a mile down to the shelter. Noah did a runner again! I don’t know how he gets behind me on the trail. I’m always looking out for him, and then somehow he’s behind me going the wrong way, looking for me. Today I backtracked most of a mile before running into Billy, a young section hiker we’ve hiked with a fair amount who had snagged him and gotten him back on track. MVP today, thanks Billy! It’s definitely a good thing Noah is headed home on Thursday. He’s done amazingly, but I don’t have the calories packed to go chasing him around and I can’t keep him on the leash all the time or we’ll both get hurt.

Anyway, I don’t have too much to say about the climb out of the NOC. I pretty much kept my eyes on the ground and tried to keep a steady pace. There were some rocky sections of the trail that were a challenge, and then some uphill pitches that were just murder, but I’m on top and it’s behind me.

Also, got stung by a bee today while I ate lunch. Just rude, bee! I didn’t do anything to you. Let me eat my cheese sticks in peace. 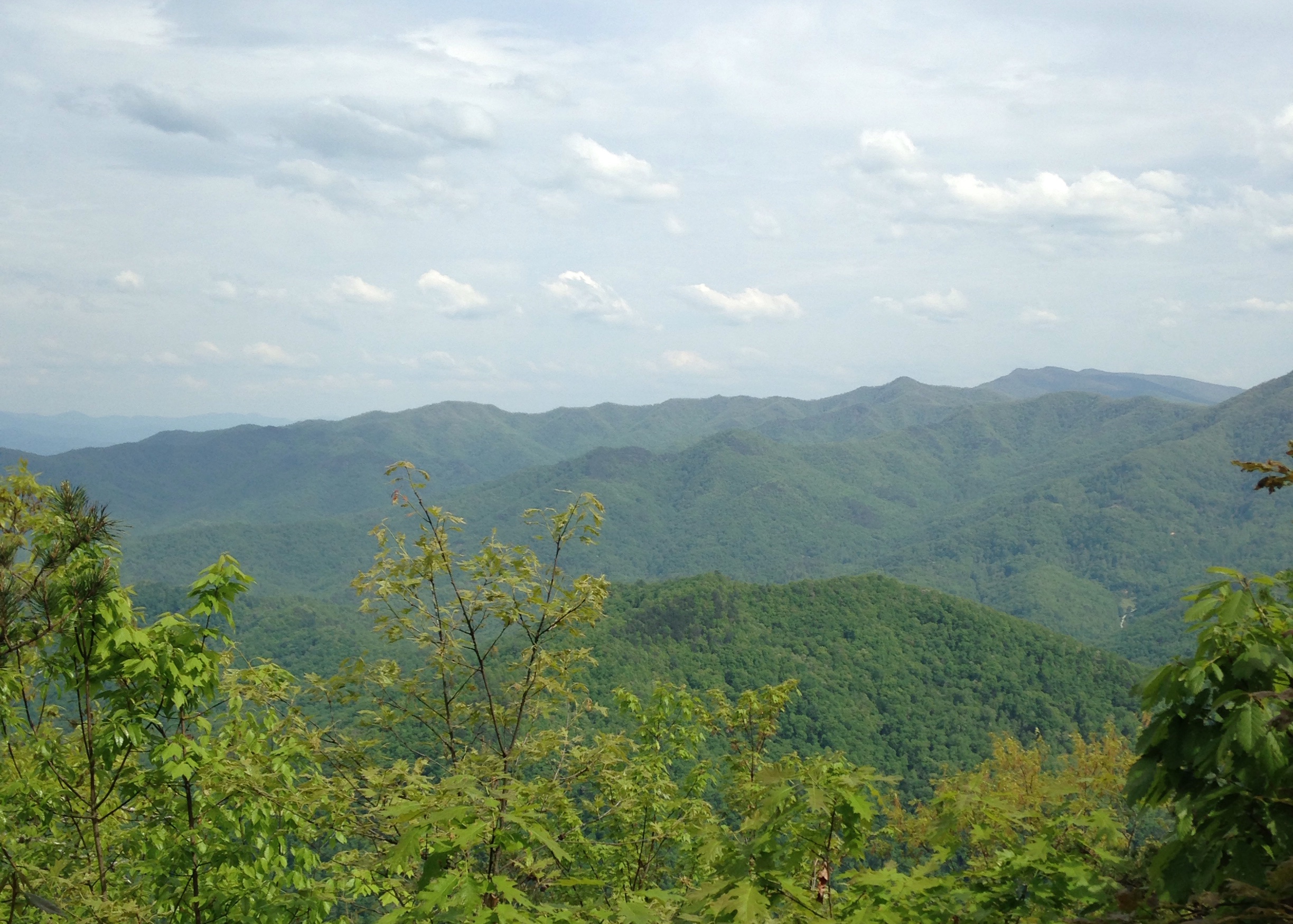 At least the views at the scene of the crime were nice.

Honestly, in retrospect I don’t remember too much about today, other than the beginning and the end. Last night at the shelter was a disaster. Everyone was asleep and an older section hiker, who stays nameless, got in after dark with her partner and talked at the top of her lungs, complaining about the cold, and ordering her friend around. “Make me dinner! My hands are too cold! Hang our packs up or the rats will get them! What do you mean you need my help? Oh just give it here, I can’t do that, I’ll just sleep with it. Who here snores? I do!” On it went. Everyone was livid. And she moaned and snored all night long, I don’t think anyone got much sleep with her there. Let’s just take a minute to talk about basic courtesy. Hiker bedtime is maybe 8:00 at the latest. 9:00 is really burning the candle at both ends. If you get into a shelter at nine, and everybody is asleep? Shut. Up. Do your best not to make a racket. Don’t act like it is your mission to spread the misery around. Just arrrrghhhhhhh don’t be this hiker.

The morning after was an exhausted blur. I hiked a fair amount. Jacob’s Ladder kicked my ass! It was like a garden, beautiful and peaceful, but the path up was steep as hell. I was really, really tired by the time Aly and I got to Cody Gap, and we didn’t see any of the others. I was wondering if they had pushed on ahead again, but no, Chris had taken the blue blaze down to the water and found a lovely little camping spot down there, and convinced Silverback and Robyn to head down there. Billy was there as well, so the whole tramily squeezed in and had a great evening in a beautiful spot. Good end to a bad start. 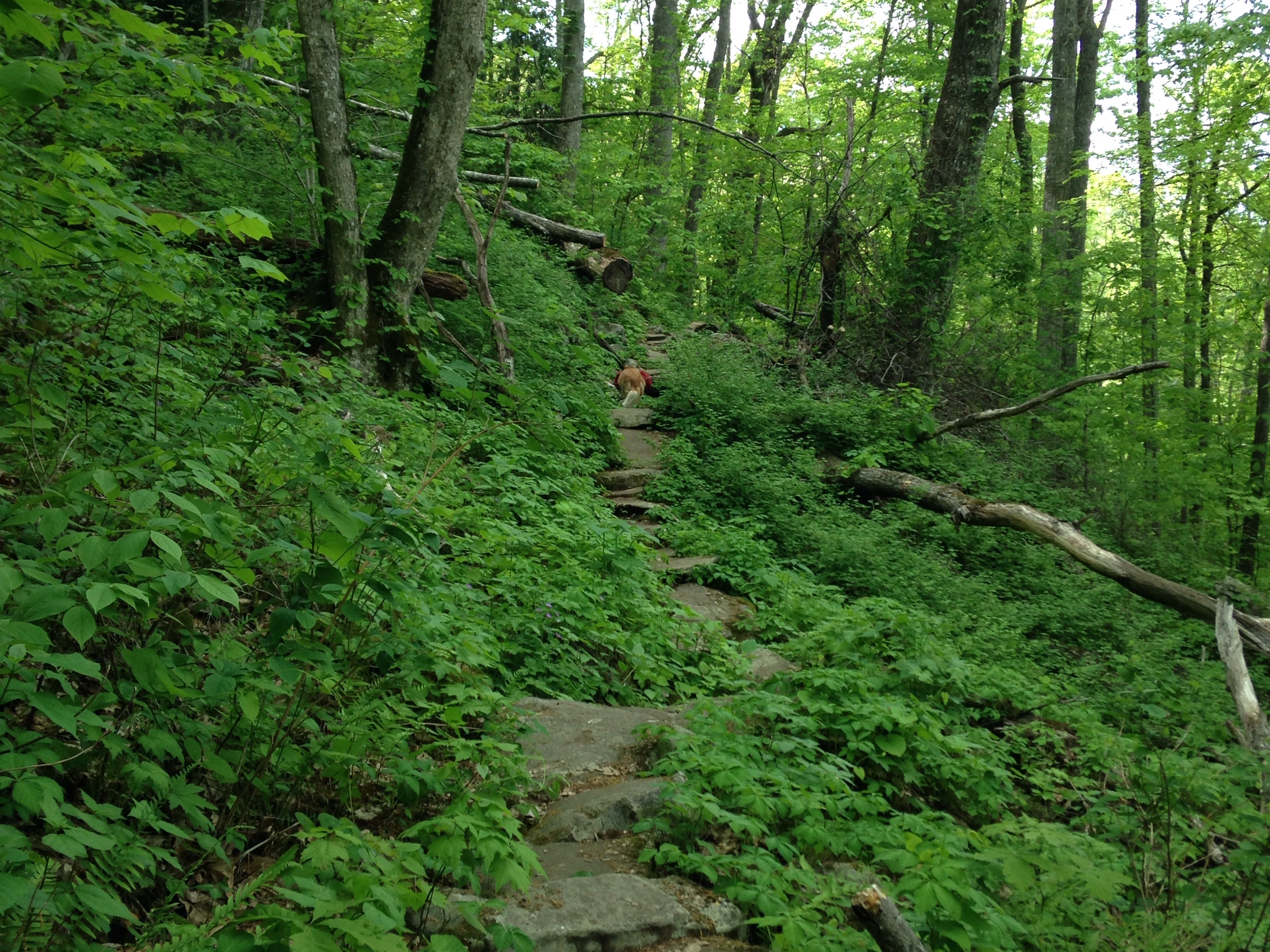 Part of the path to Cody Gap

Again, I don’t remember too much about the day’s hiking. Got down to the highway and we all called a shuttle to Fontana Village to resupply. Spent a good amount of time on the porch in front of the general store, relaxing and eating junk food while laundry got done. I suggested Recon as a trail name for Chris, because he is always checking out the blue blazes and finding the coolest spots to show us, and he took it. Then we got a ride back and hiked the final mile to the Fontana Dam Shelter, affectionately known as the Fontana Hilton. They have SHOWERS and REAL BATHROOMS there. Oh my goodness, I went to bed clean in one of the most beautiful spots I’ve seen yet. Paradise. 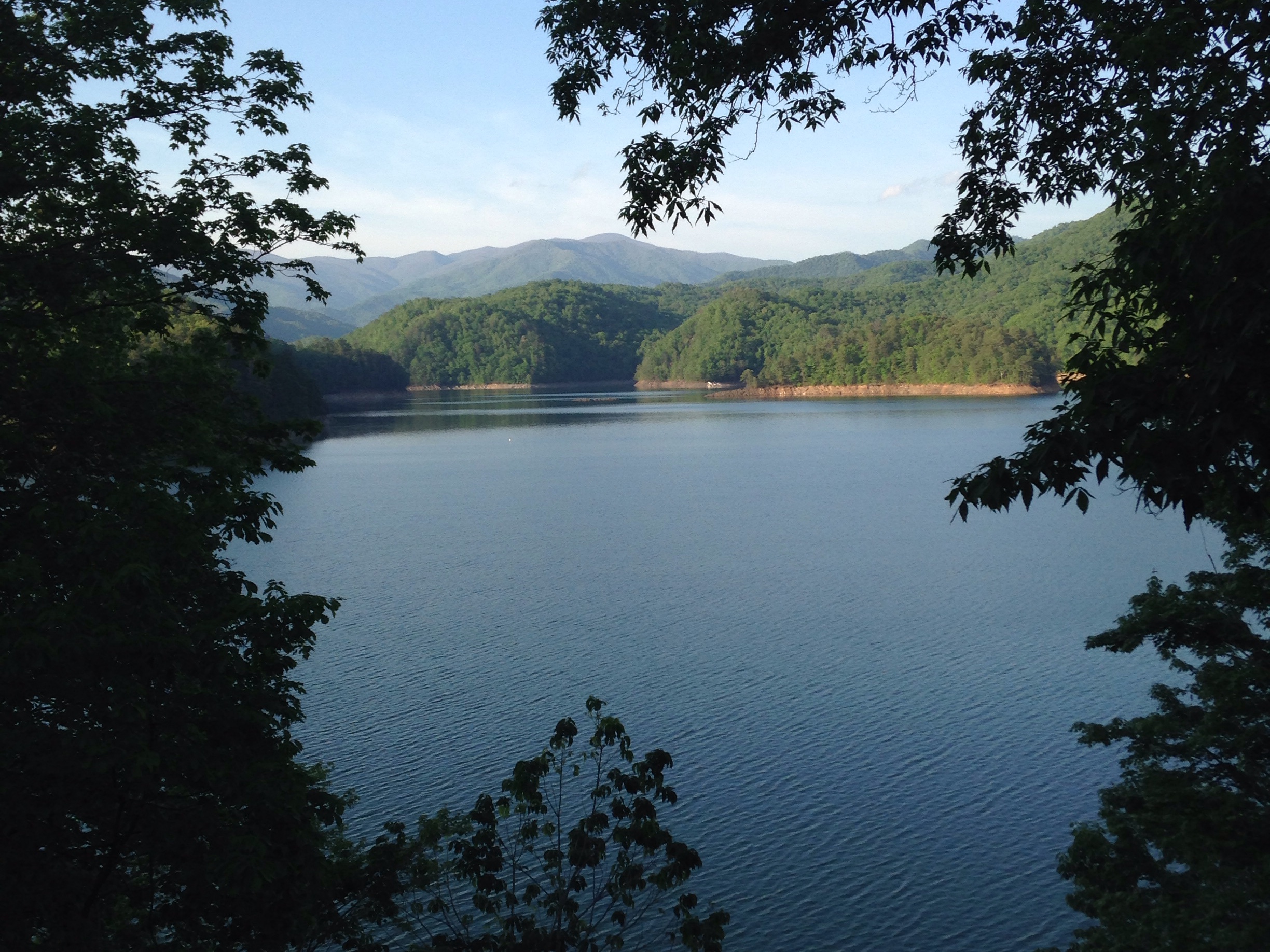 View from the Fontana Hilton

Woke up and brought down the tramily’s bear bags when one of the men in the shelter sat up, clutched at his heart, and yelled in pain. I thought he was having a heart attack, scared the shit out of me. Turns out he fell last night outside the shelter and thought he might have cracked some ribs. I called around for fifteen minutes trying to get him a shuttle to a doctor’s, and finally a day hiker took him in. Walked half a mile to the visitor’s center and met my dad and my brother to send Noah home. I sent him off alright but I miss him already.

Then we started the Smokies. I don’t know why but today was tougher than any other day so far. The woods were beautiful, full of ferns and big old trees, and the smell brought me back to childhood days in Vermont, crisp and spicy. There was a great old fire tower at the top of the Shuckstack, three miles in. But I was exhausted by the time I hit the shelter! I don’t really know why it took such a toll on me. 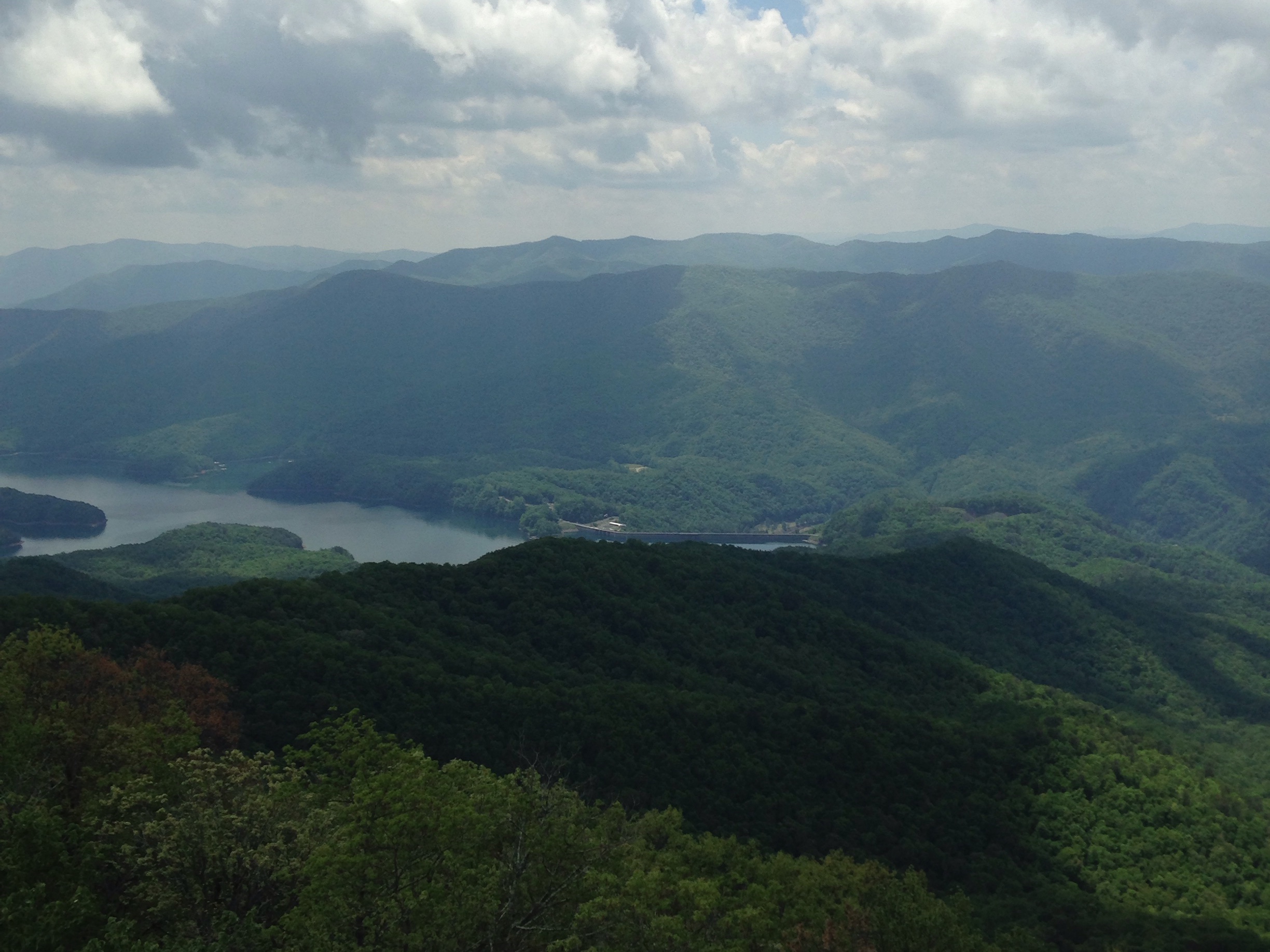 Down there at the dam is where I started in the morning.

The shelter is really crowded here. Lots of people come to this park, and apparently the next two shelters are closed due to heavy bear activity, including an attack on a hiker. Tomorrow is going to be another tough 12-mile day of up-down-up-down for the whole day, and Chris has a badly bruised heel. I should stop saying my feet hurt. There hasn’t been a single day when they haven’t felt like raw meat at the end, and I’m not sure there will be a day when they are comfortable again until after Katahdin.

I love it out here.