The Dirt on the Trail: Chapter 12

The Omelette Guy
We finished the climb to the summit of Mt. Cube, then made our way down towards Cape Moonshine Road. 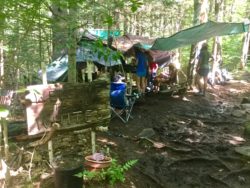 The Omelette Guy and his dog, Lips, were not much further in the woods, and were great company. Each of us waited our turn for our eggs. I ate several corn muffins, drank several cups of juice and coffee, and enjoyed 80’s tunes as I waited. 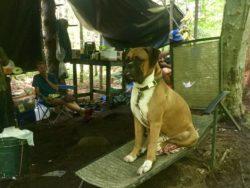 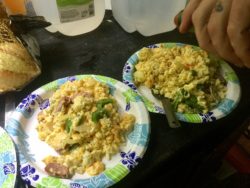 After filling our bellies, we hiked further to hitch into Warren, NH, which would prove to be tricky since traffic was lacking. A SOBO was hiking a stretch of the trail with his parents and they were kind enough to take us there.
We resupplied, then admired the random rocket ship in town with Mt. Moosilauke in the distance. 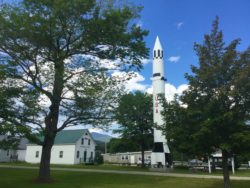 Upon our return to the trail, we climbed Mt. Mist, stopped at Jeffers Brook Shelter for the night, and dreaded our first big climb in the Whites which we’d be tackling in the morning.
—

Mt. Moosilauke and Tramily in Lincoln
Our fears would be exaggerated as the climb up Mt. Moosilauke would be difficult, but not as severe as we dreaded. 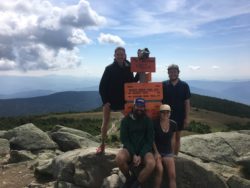 A hiker found a moose skull on the trail and decorated the sign properly. 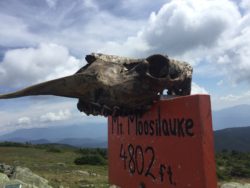 The scenery was stunning! 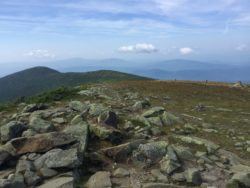 The rock scramble down was more grueling than the climb up, but the last stretch followed a waterfall.

We made our way to Kinsman Notch to hitch out with Gumby, Cricket, and another hiker, Blueberry. The lady who drove us had apparently been drinking (unknown to us until we were making our way down the road), and she couldn’t make the extra 1 mile to Lincoln, NH. She told us we weren’t allowed to go where she was going. We’re pretty sure she was off to score meth. It took us a while to get a hitch the rest of the way.
We spent some time in McDonald’s and a tourist pointed out a bear wandering around the dumpster as we went on the hunt for wind pants around town.
No luck, so we made our way to Price Chopper to get a one-day resupply. Before reaching the parking lot, we ran into Miss Janet and asked if she would take us back to the trail later. She said she would after grabbing something to eat and started driving off.
I saw a girl waving frantically at us in the car directly behind her and we were totally surprised to see it was Snax, a girl we hiked with last year. She parked, met us out front, and told us we could crash with her for the night. She works for the Forest Service in the Whites and a friend was letting her stay at a nearby resort for a few days since she commuted there everyday from Vermont. We were stoked! We exchanged numbers and resupplied.
When we got back outside, Miss Janet was there and was going to have someone else drive us back to the trail which turned out to be another person we hiked with last year, Teradactyle. We hugged and mentioned we would no longer need the ride, but it was still nice to see him.
Snax drove us to her place, we lounged around, drank a few beers, then after showering, we made our way to the hot tub downstairs. It was quite the relaxing evening!
—

A Bad Day on Kinsman
Snax took us back to the trailhead and we said our goodbyes. We had a great time catching up. 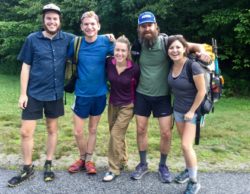 Normally a 16.5 mile day isn’t so bad. In the Whites, we would get our asses handed to us! It was all rock scrambling up and down steep terrain with limited views and very soggy shoes. There was one stretch by Harrington Pond where walking through water was absolutely unavoidable and several of the scrambles up trail doubled as a stream. 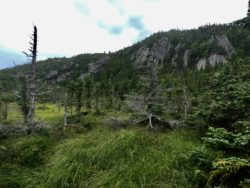 The view on Kinsman Mountain wasn’t much, but when we got down to Lonesome Lake Hut, the view on the lake was serene. 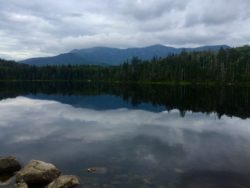 It was getting late by the time we made it to Franconia Notch. We all felt battered. Fortunately, a couple hikers had been in touch with Miss Janet who picked us all up and took us back to Lincoln.
We ate bad Chinese food, then rolled into Chet’s Place, a nearby hostel, around 8:30 pm. We went right to sleep.
—

Franconia Ridge
We went to Price Chopper to resupply after eating at McDonald’s. A guy named Bill offered us a ride afterwards. He was killing time as his family was hiking and was planning on meeting them from the opposite direction later in the day.
He dropped us off and I was bummed out. So many people have told me how incredible Franconia ridge was, and the weather wasn’t looking promising. It was a foggy climb up to Little Haystack Mountain where we ate lunch. As we ate, the clouds started to clear. The four of us were blown away. You couldn’t see far, but the views along the ridge were gorgeous! 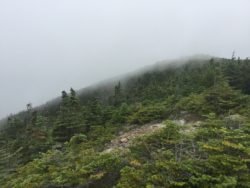 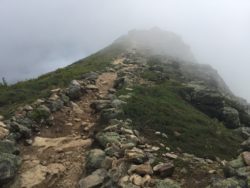 We slowly made our way along the ridge to Mt. Lincoln, then Mt. Lafayette. 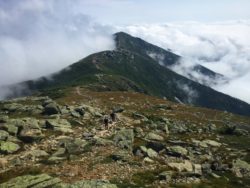 It was nice to have our best day follow our worst! We ended our hike at Garfield Pond with several other hikers. 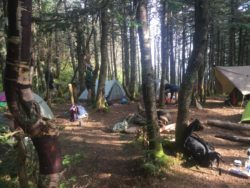 Reunited
We climbed up Mt. Garfield, then took a break at Galehead Hut just as it began to rain. Middle Brother, who we had hiked with day one, had finally caught up to us! Our group of 4 was now 5. 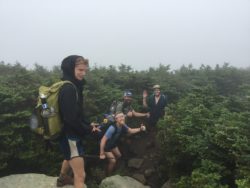 As the rain was blowing over, we ate lunch, then caught our next great view as we passed by Mt. Guyot. 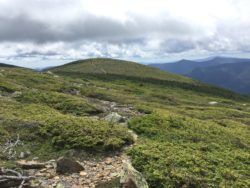 We took another short break at Zealand Falls Hut where we saw a nest of snakes, then scored a stealth site about 4 miles further. 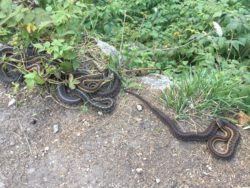