Foxfeet’s Return and Our First 150 Miles

Hello again and welcome to anyone just tuning in for my first blog post from the trail! It’s been more challenging than expected to find energy and time for creating trail updates on top of keeping a daily journal about our stats and experiences, so apologies for the delay.

I’ve decided to break down blogs about our SOBO-NOBO flip-flop thru-hike (that’s a mouthful) by state, and while longer states will have their own post, some of the shorter states might be grouped together. So buckle up those backpack straps, ’cause here we go! 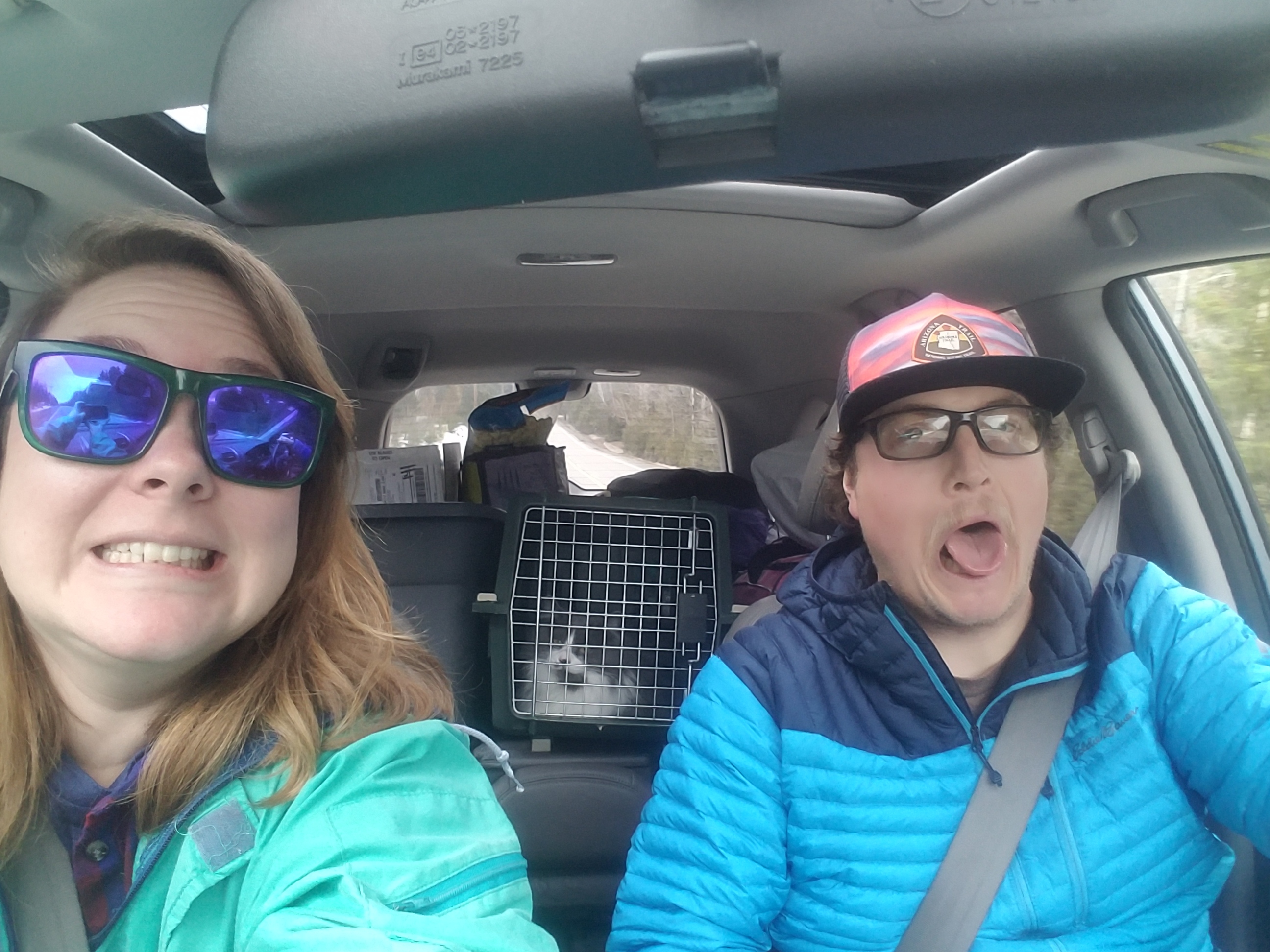 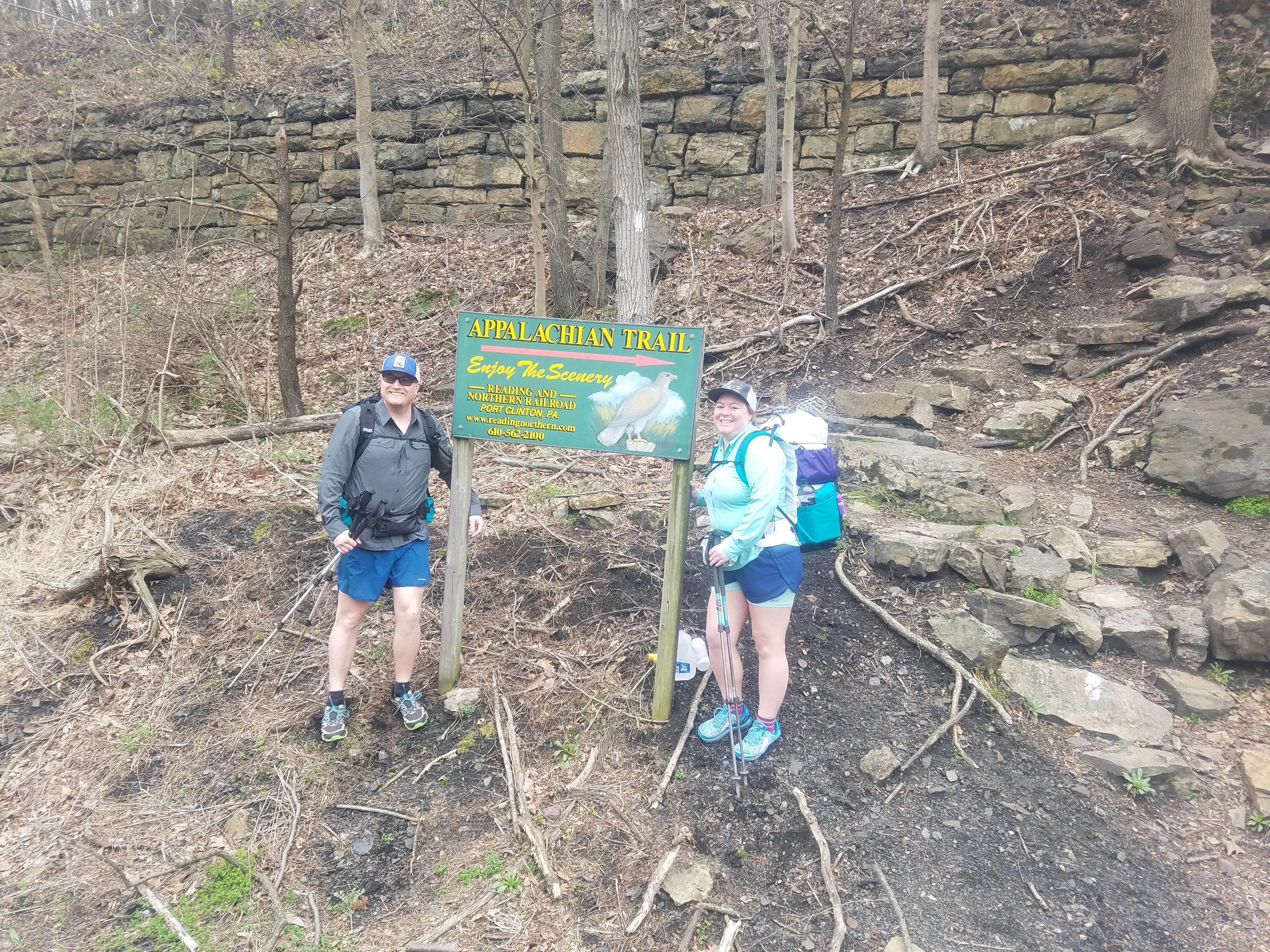 Fresh and ready to climb straight up. Photo cred: Jess (my best friend who drove us out there, thanks again!)

Our initial southbound trail footsteps launched off on April 18, and we got a taste of the rocks that Pennsylvania is known for right away as we climbed the steep ascent of a ridgeline out of Port Clinton. The first couple of days were a mixed bag with terrain, ranging from nice, even ground to mind-numbing rock fields that required total concentration to avoid ankle rolling or breaking something. 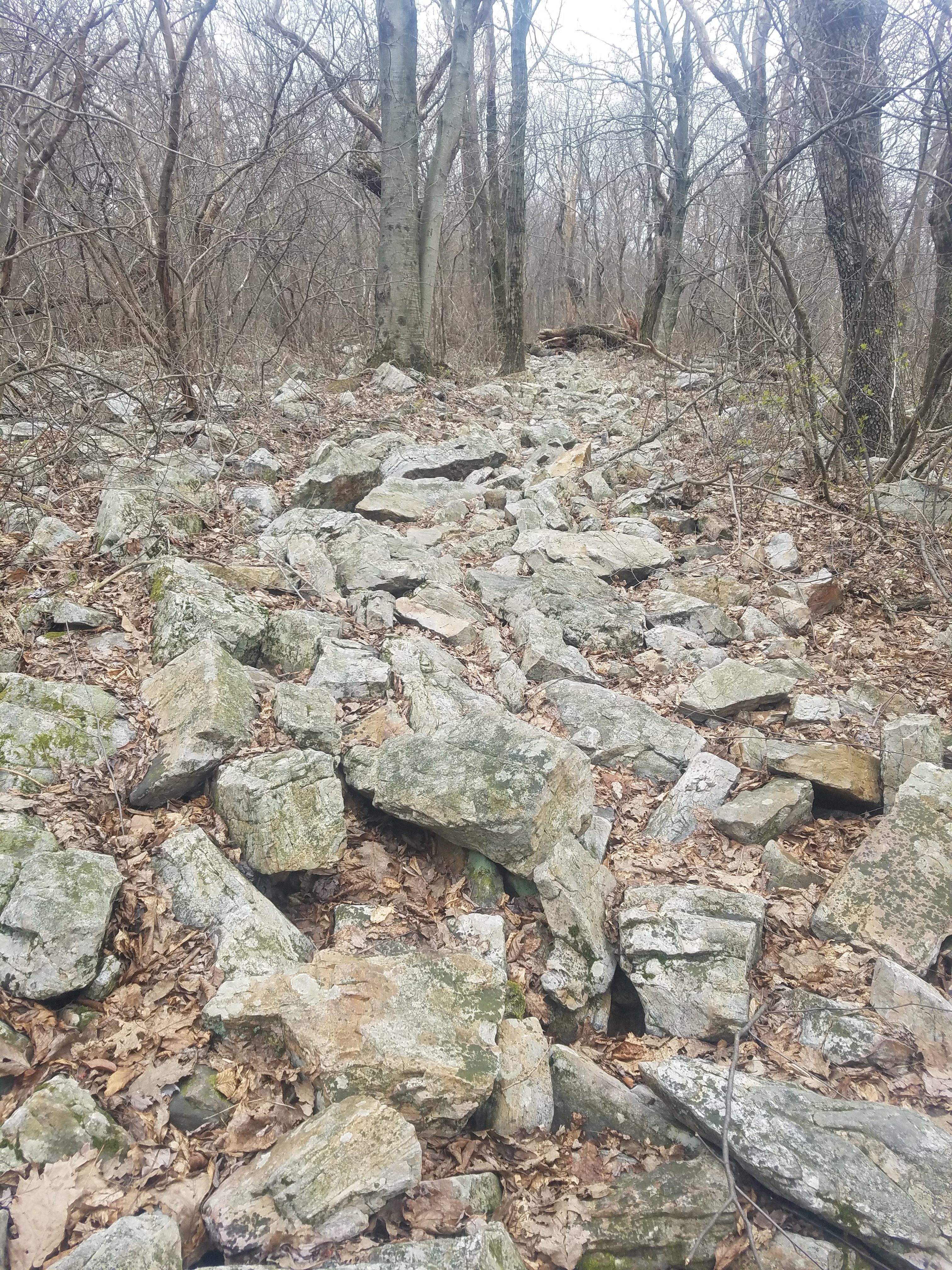 Moving farther south, we began to notice that the rocks thinned out for the most part, and we were able to appreciate smoother sections of trail by comparison. Much of the terrain toward Southern PA was rolling, with climbs up to and along a ridgeline for miles before dropping down again to a road or gap, then repeating the process. 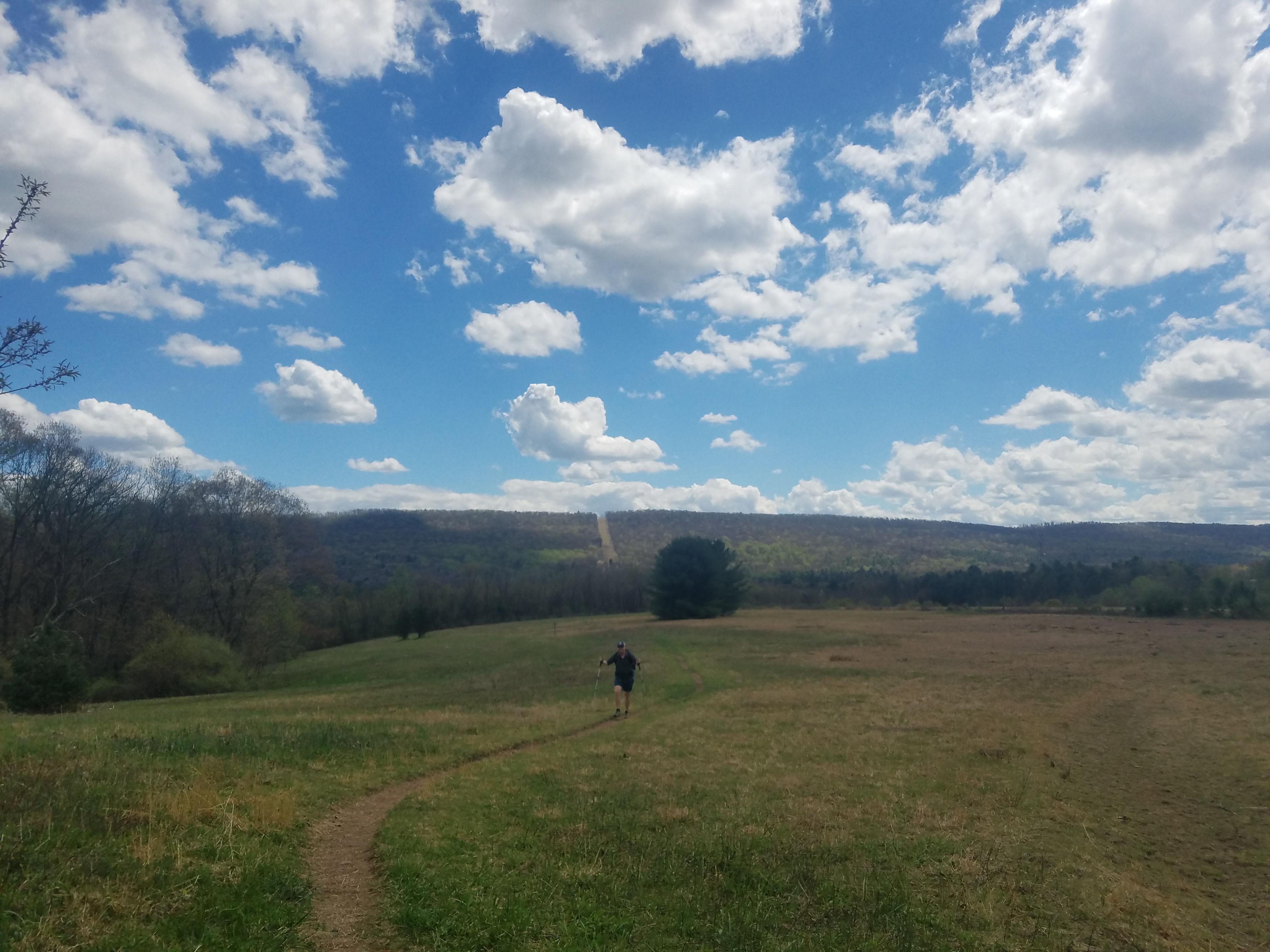 Many nights early on we camped completely alone, even at shelters, as the NOBO bubble had yet to arrive. Those we did encounter in passing were either section hiking or starting a flip-flop from Harpers Ferry, WV (the psychological half-way point on the AT), though on rare occasions we crossed paths with an early-season NOBO as they sprinted ahead of the pack to Maine. Our journey in the first week was more lonely than I’d expected, and we questioned our decision to start when and where we did more than once. 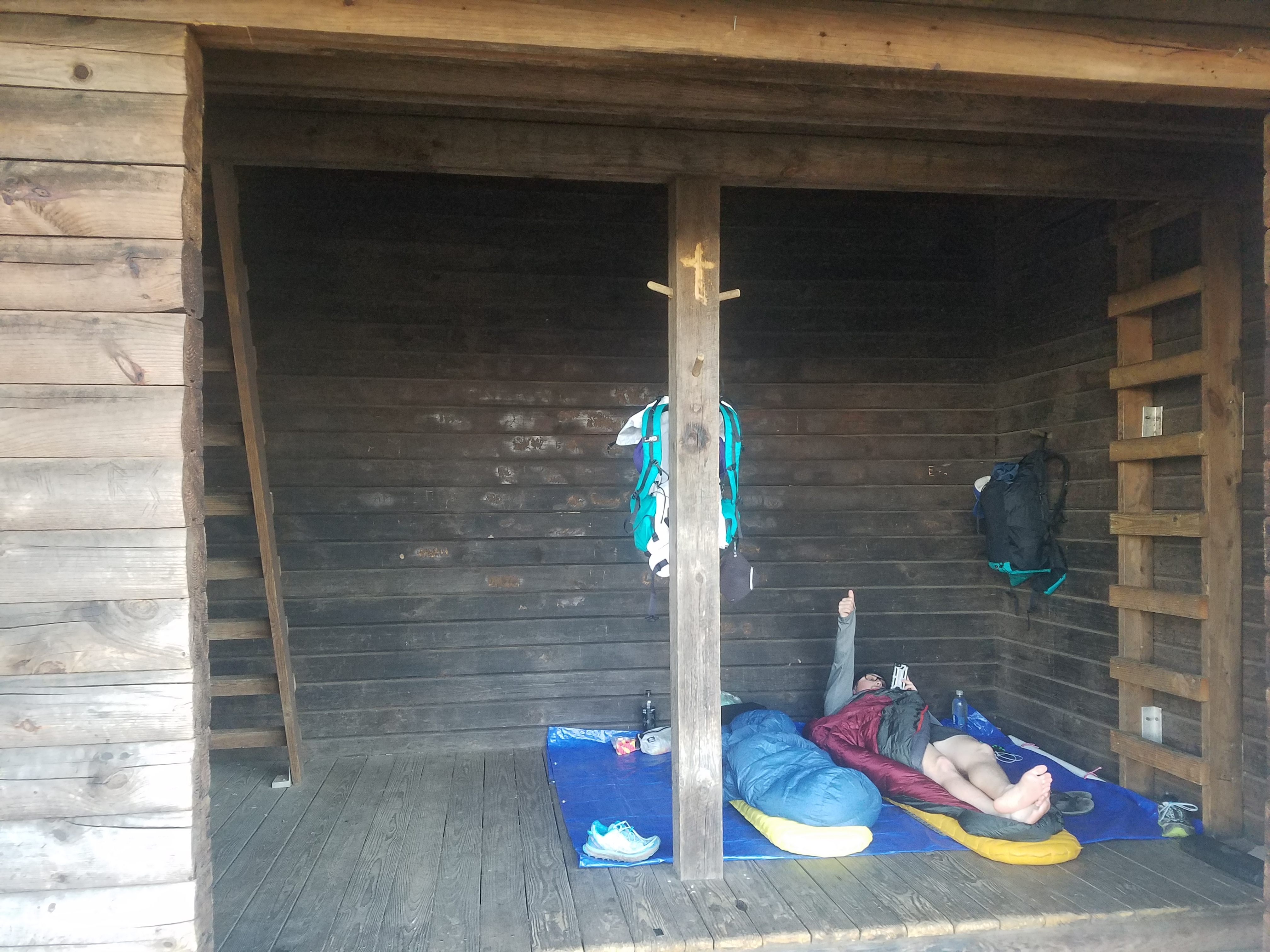 All alone at William Penn Shelter. We didn’t sleep well that night.

Day six saw us tromping down into Duncannon a full three days before we had expected to arrive, based on keeping low daily mileage to avoid excess strain, injury, and blister problems. I was definitely out of shape for hiking and overweight, so I was terrified that some physical problems I’d experienced during our 40-mile section hike on the Arizona Trail last fall (blisters, plantar fasciitis) would return to haunt me as we set out on our thru-hike. Luckily, I couldn’t have been more wrong! Without foot pain or blisters, we cruised over more miles each day and were way ahead of schedule. 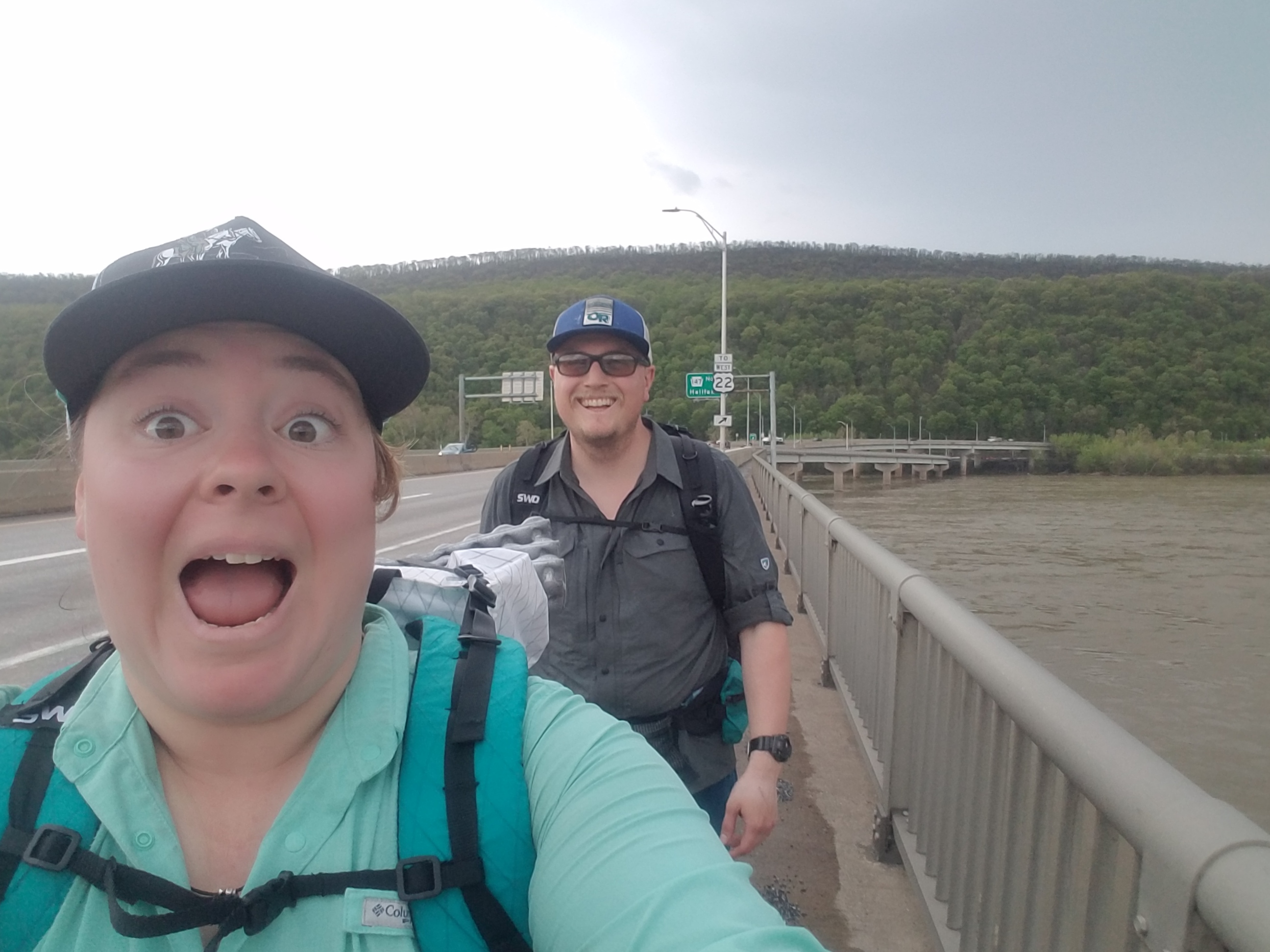 Those are our “going to town” faces 🤣 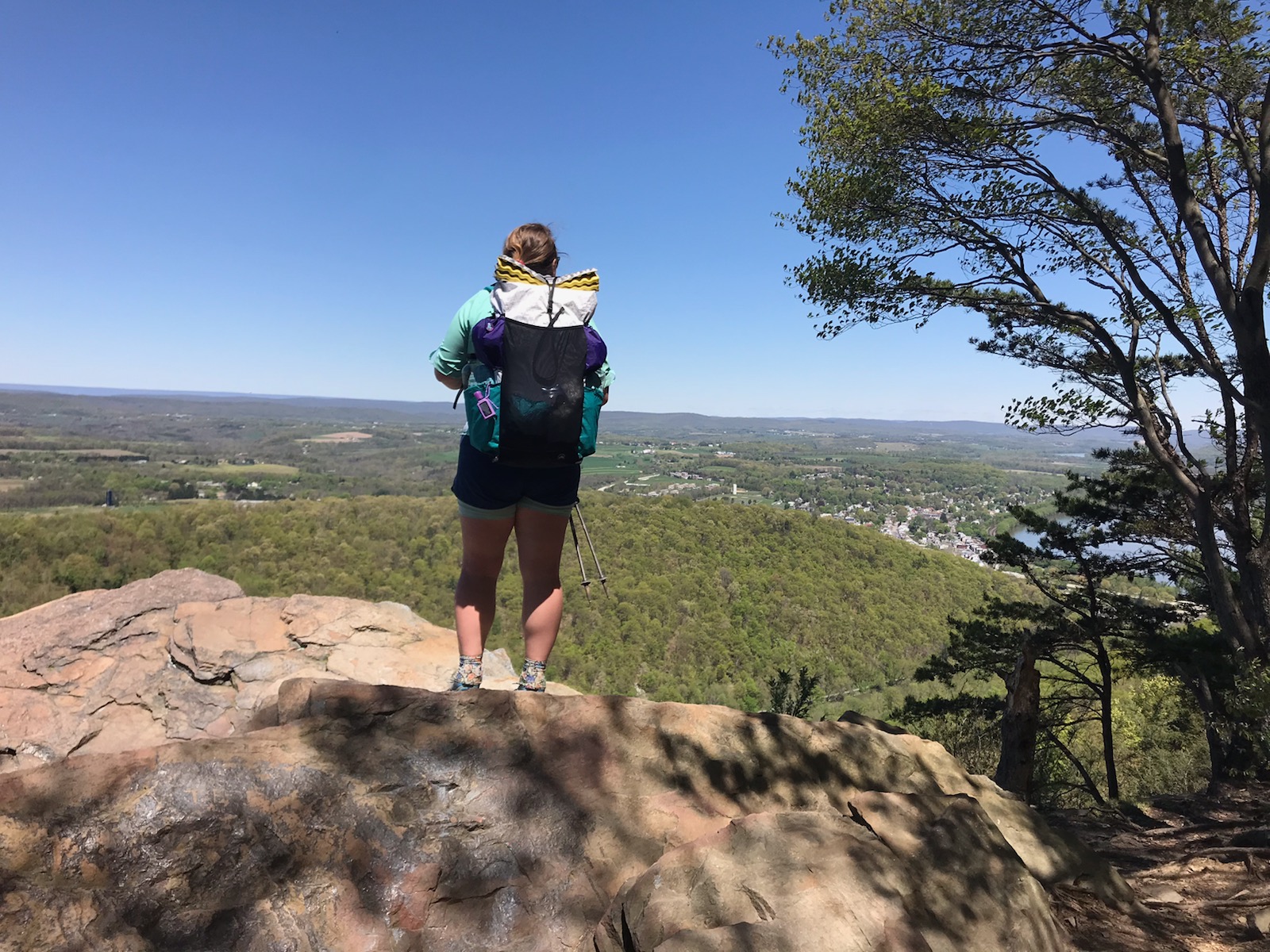 Day eight brought us right through the heart of the quaint little town of Boiling Springs, where we managed to get a shuttle to Enterprise in the next town, and rent a car to drive ourselves back to my folks’ house for a day off. This proved to be the easiest and cheapest option for a zero (day in which no miles are hiked), as a kickoff car show for the spring/summer season was taking place in Carlisle, and all the local hotels had abandoned their hiker rates. Everything was either booked up or the one-night price for a room started at $120, well out of our (and most other hikers’) price range. 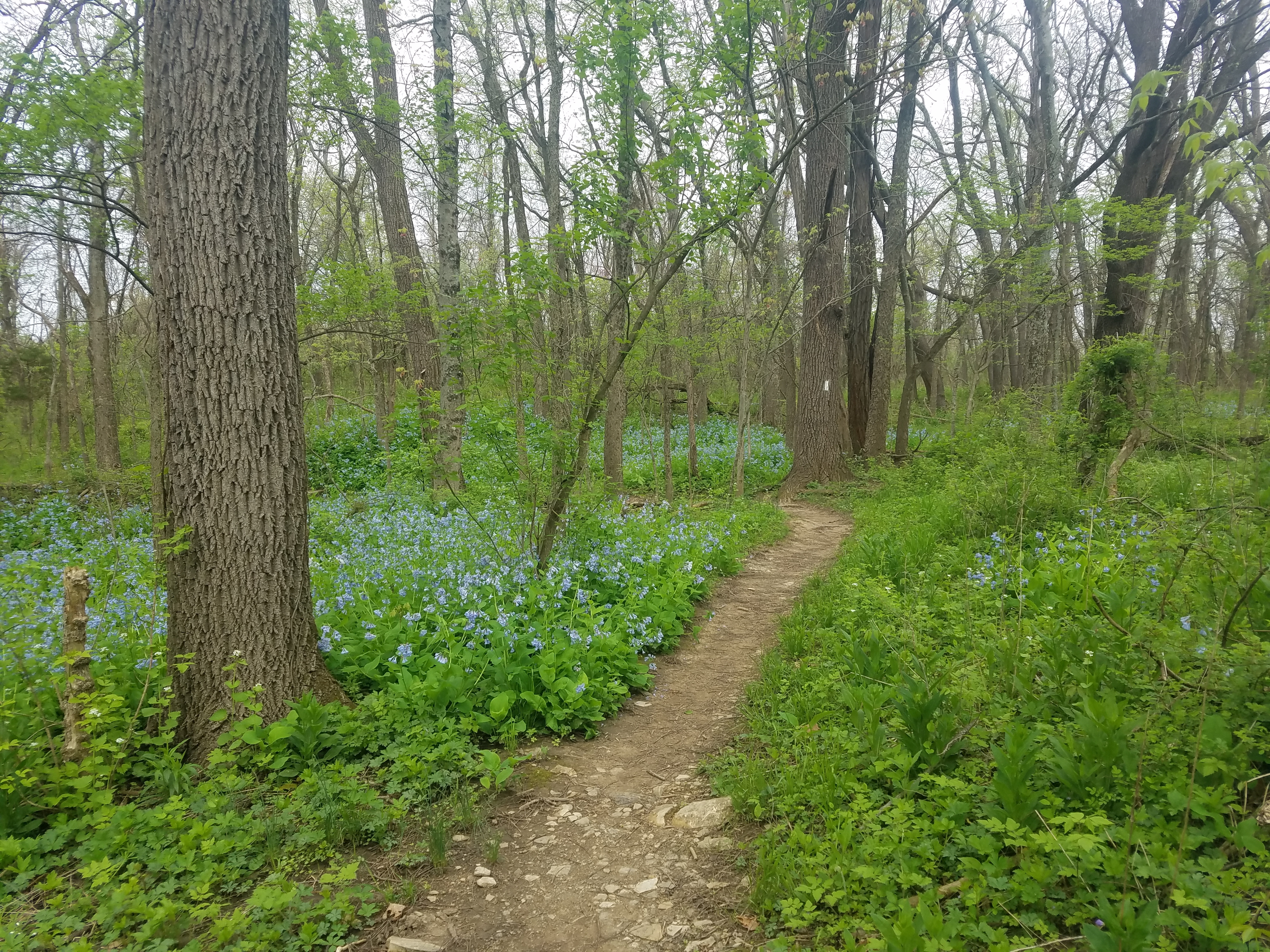 Spring flowers began to pop on our hike into Boiling Springs.

This little foray back to home base, aka my parents’ place, in southeastern PA allowed us to swap out gear, avoid a bad storm system, and resupply for our second week before we had to get off trail again for the first of two weddings we planned to attend in May.

Swapping gear was paramount. Having hiked the Laurel Highlands Trail in PA last spring around the same time frame (read about that hike here), we had prepared to be much colder, both during the day and at night. I used our zero day to analyze my pack contents and subsequently drop some base layers, thick wool sleep socks, and gloves, switch my long-sleeved button-up hiking shirt for a wicking T-shirt, dump hand and toe warmers, condense individual stove setups into one (we each had our own), etc. All of what we dropped in cold weather gear and extra items probably accounted for a pound or more in our packs.

I also was able to switch to a new pack, having finally received the Mountainsmith Zerk 40L in the mail during our first week out, which I had ordered through a deal with Indiegogo during the winter. Figured now was the time to test it when we would be getting off trail again in a week, in case anything really didn’t work out. 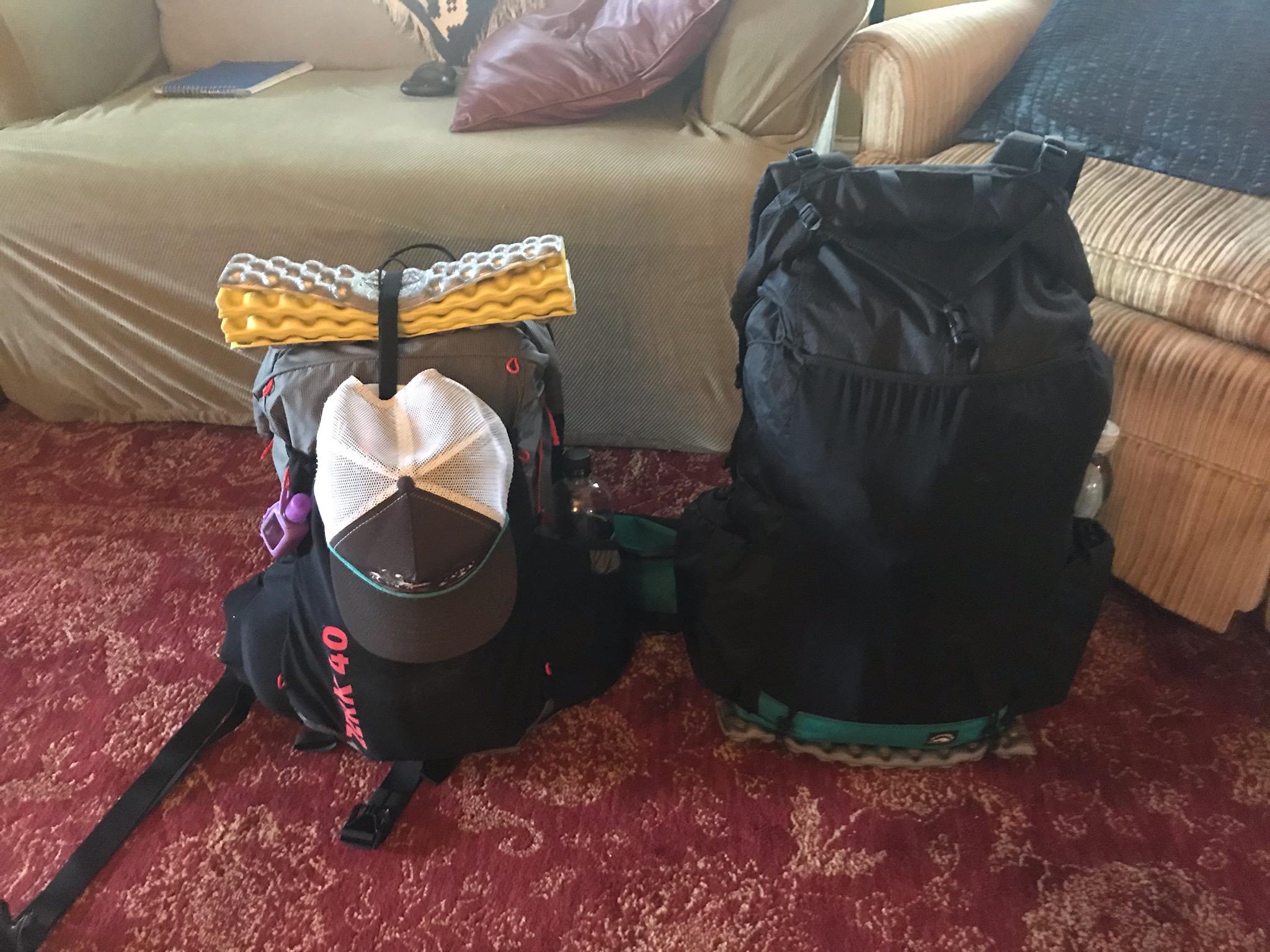 The day after we got back to the trail following our zero, we hiked through Pine Grove Furnace State Park, a well-known place along the AT due to the fact that it’s around the actual halfway point on the trail when you start either in Georgia or Maine. Pine Grove Furnace SP is also known for its Half Gallon Challenge, a thru-hiking tradition in which you must consume a half gallon of ice cream, winning bragging rights, a tiny wooden spoon, and an upset stomach (in most cases). We decided to pass up the challenge since the day was cool and drizzly, and we in no way had the hiker hunger of the NOBOs, who were actually over halfway on their thru-hike. The few we saw attempting the challenge were noticeably uncomfortable, shivering wildly, teeth chattering as they shoved sporkfuls of ice cream into their mouths. Garrett and I did partake of the short order grill food available, however, and to this day we still recall the burgers as the best we’ve had on trail so far (that place was very generous with the avocado!).

One other major highlight of our time at Pine Grove Furnace SP was that we ran into Frozen, who has been documenting his thru-hike via his YouTube channel, Outdoor Adventures. Garrett and I initially found Frozen’s videos in 2017 while looking for any documentation of thru-hiking along the Laurel Highlands Trail, and have been following along with his videos ever since. We managed to catch him as he arrived and quickly got down to business with the ice cream challenge, cheering him on before heading into the hills to make camp a few miles farther south. 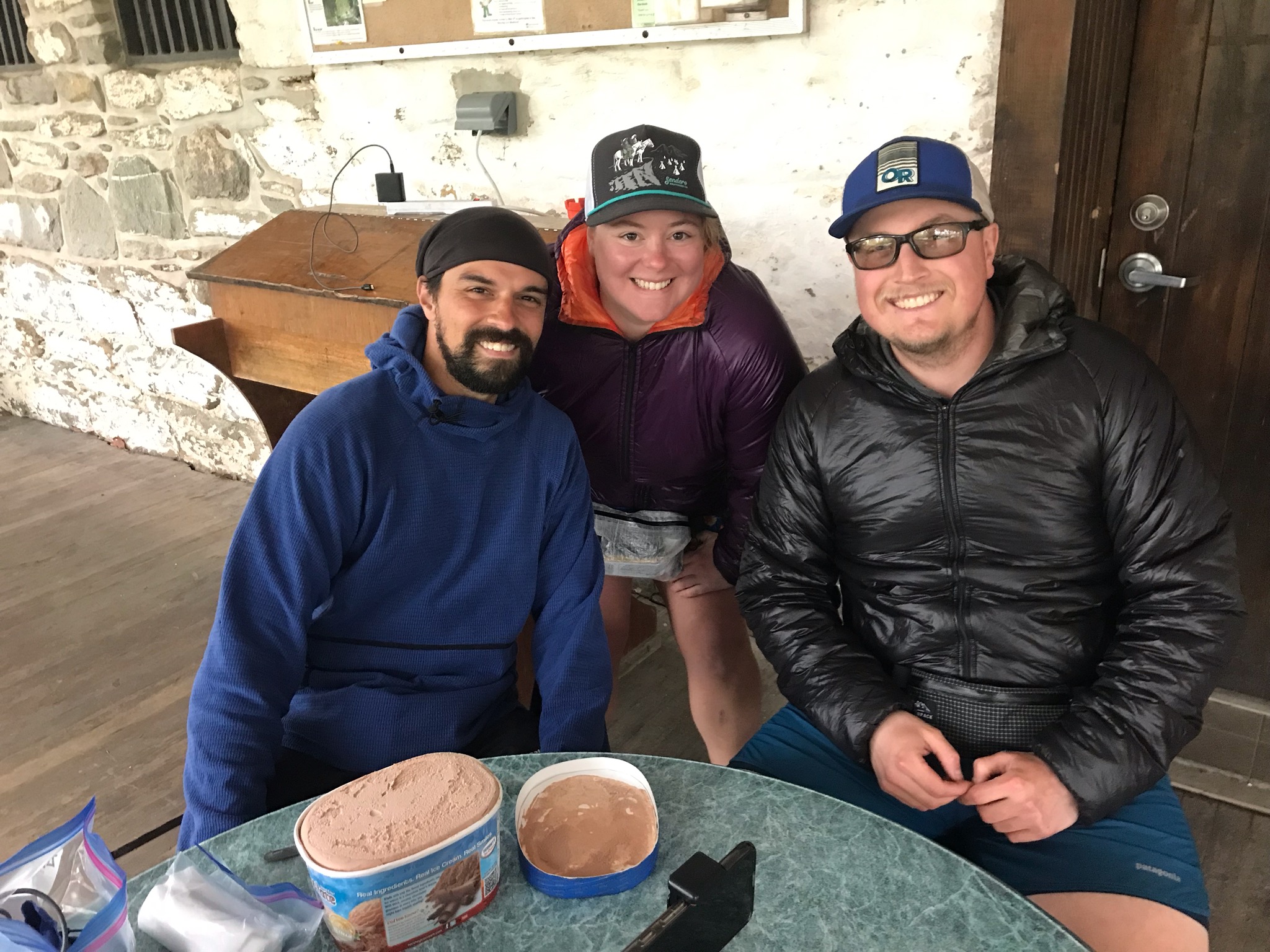 Frozen and his ice cream. (Not pictured is the additional pint of hand-dipped ice cream you have to eat after the massive carton.)

Redemption from the Rocks

Our last few days in PA were made very enjoyable by two of the most beautiful and pristine shelter areas I’ve ever encountered, Quarry Gap and Tumbling Run, and we stayed at both. Quarry Gap is a double shelter, with a completely covered picnic table/common area in between the two with a skylight, as well as a long overhang off the front to give protection from the elements. Hanging pots and log stumps turned into planters showcased pretty seasonal flowers, the spring was fed through a stone-lined channel that swung past right in front of the shelter area, a smaller covered picnic table/pavilion was available for cooking, fencing and gates welcomed you to the shelter, a wooden swing had been erected to the left of the shelters next to the privy trail, which overlooked a couple of large wooden tent platforms, and a few garden gnomes peeked out on the scene, lending a bit of magic and fantasy to the whole place. 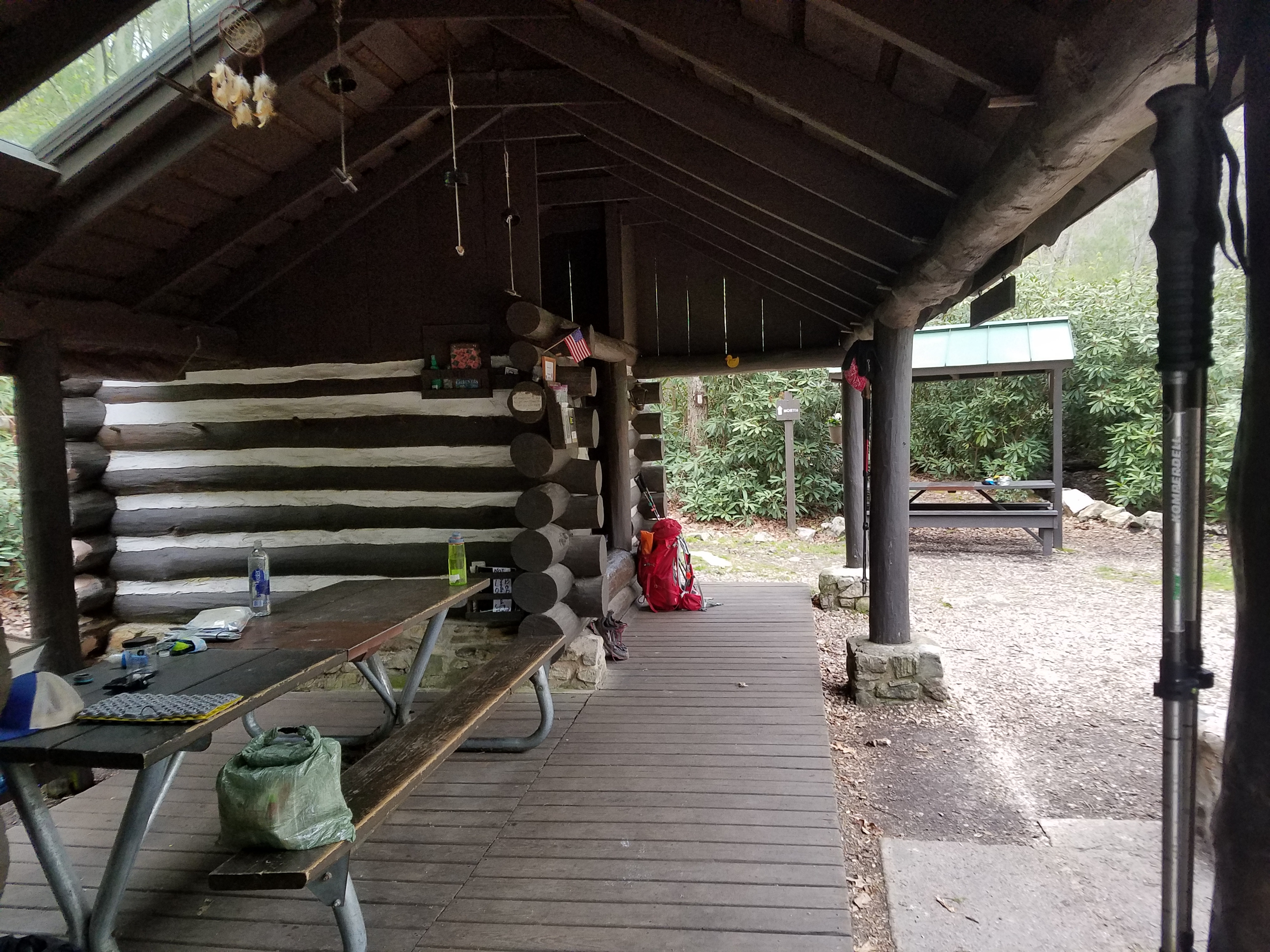 Quarry Gap from one side of the overhang. 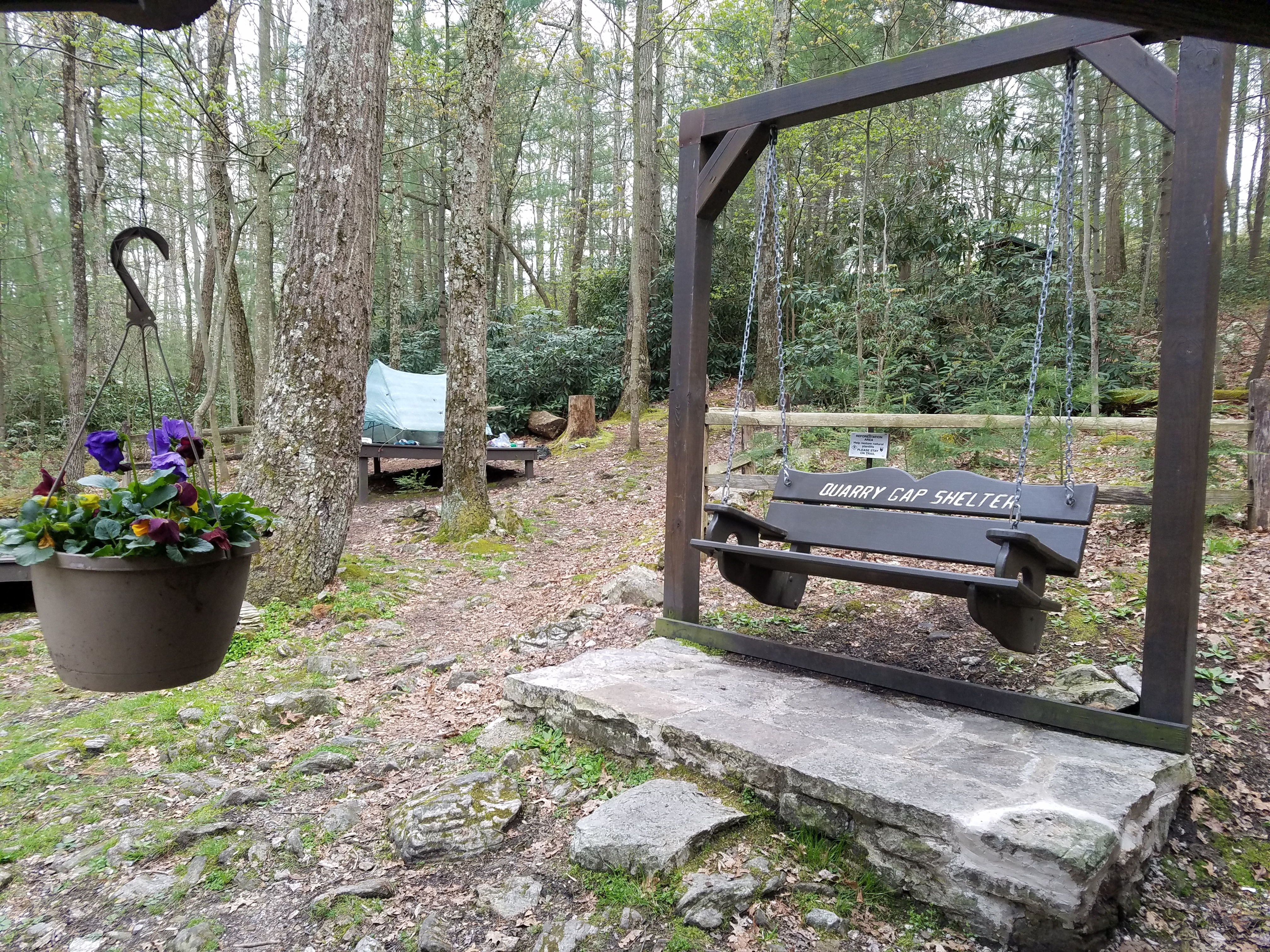 Tumbling Run is also a double shelter, though each stood alone with a picnic table between them on laid stones and pea gravel. One was marked snoring, the other non-snoring, and both were immaculately kept, not a cobweb in sight. A large, standalone pavilion with another picnic table overlooked the whole area. Tent sites had their own lined paths and areas laid with pea gravel to set up on so that surrounding reforestation zones could stay untouched. Big trees throughout the hollow had whimsical faces on them. The privy was a pumped outhouse, so it was a fresh-smelling place with its own toilet paper and hand sanitizer. And finally, the water source was a piped spring that had been tested by the caretakers (who visit basically once a day and have been caretaking since the ’90s), and was clean to drink without treating or filtering. 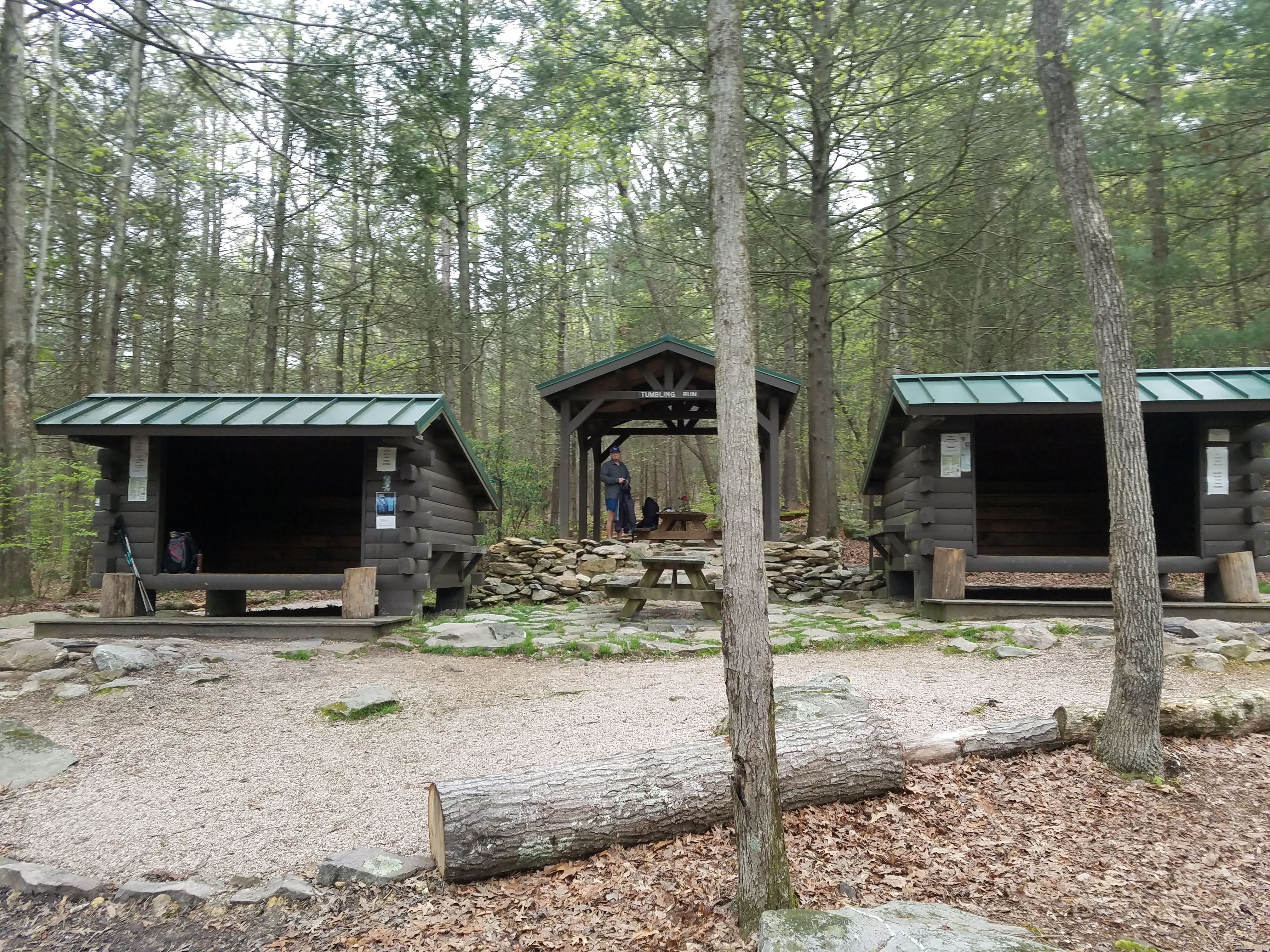 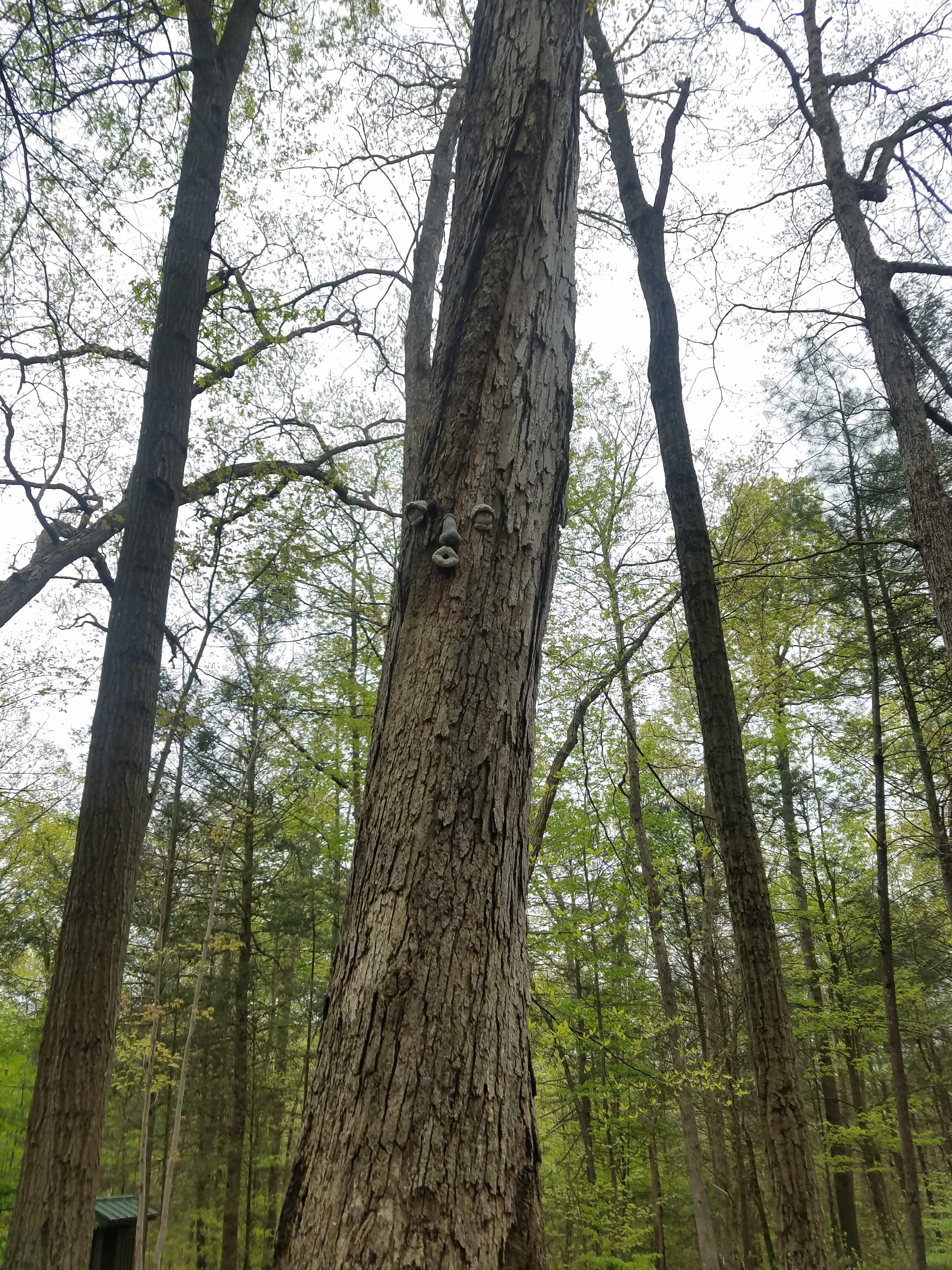 Oh, hellooooo up there! 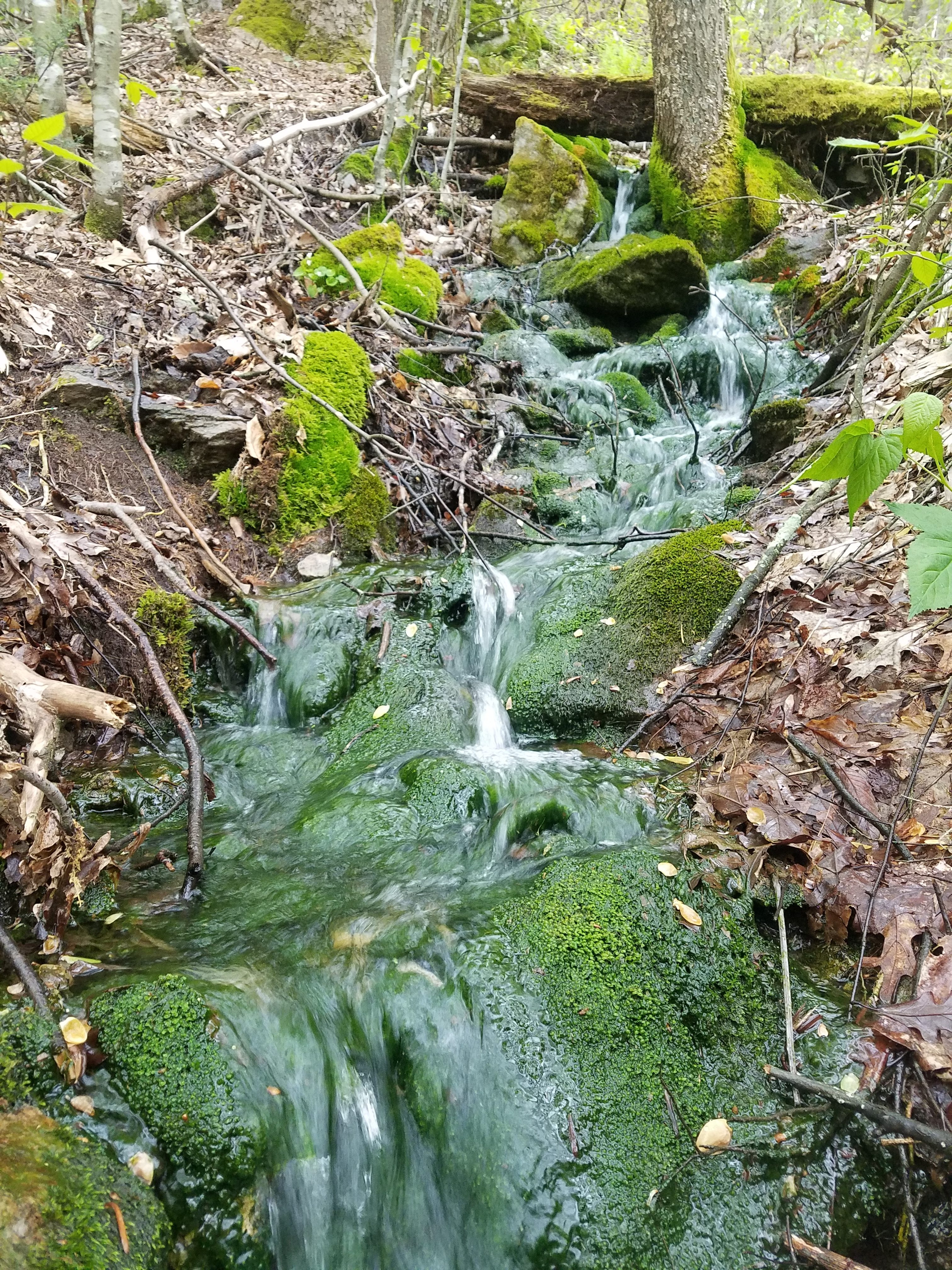 Whatever PA trail was lacking in views, these two fantastic shelters definitely made up for it, and since they were some of our last shelters in the state, we were left with fond memories as we crossed into Maryland and officially entered the South. 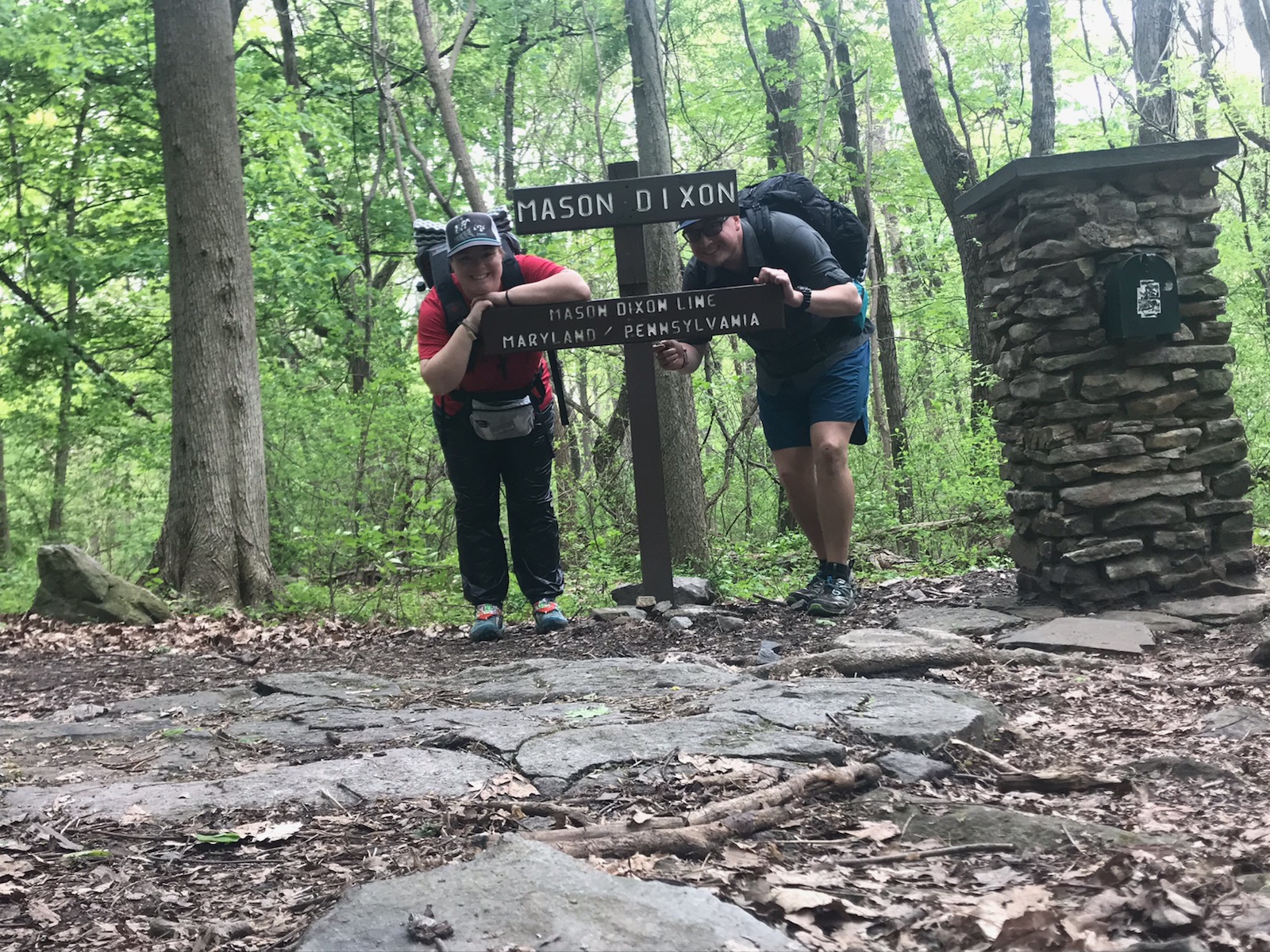 This was the first time Garrett had ever hiked across state lines on a long trail, and was super excited!

We hiked past the border sign and emerged in PenMar County Park, where chapter one of our journey ended. We were picked up from the foggy, misty spot by my mom, driving back to my parents’ in PA once again, this time to pack and travel out to Leavenworth, WA, for wedding adventure number one.