Two Down, Twelve to Go

Check out my first update here if you missed it! 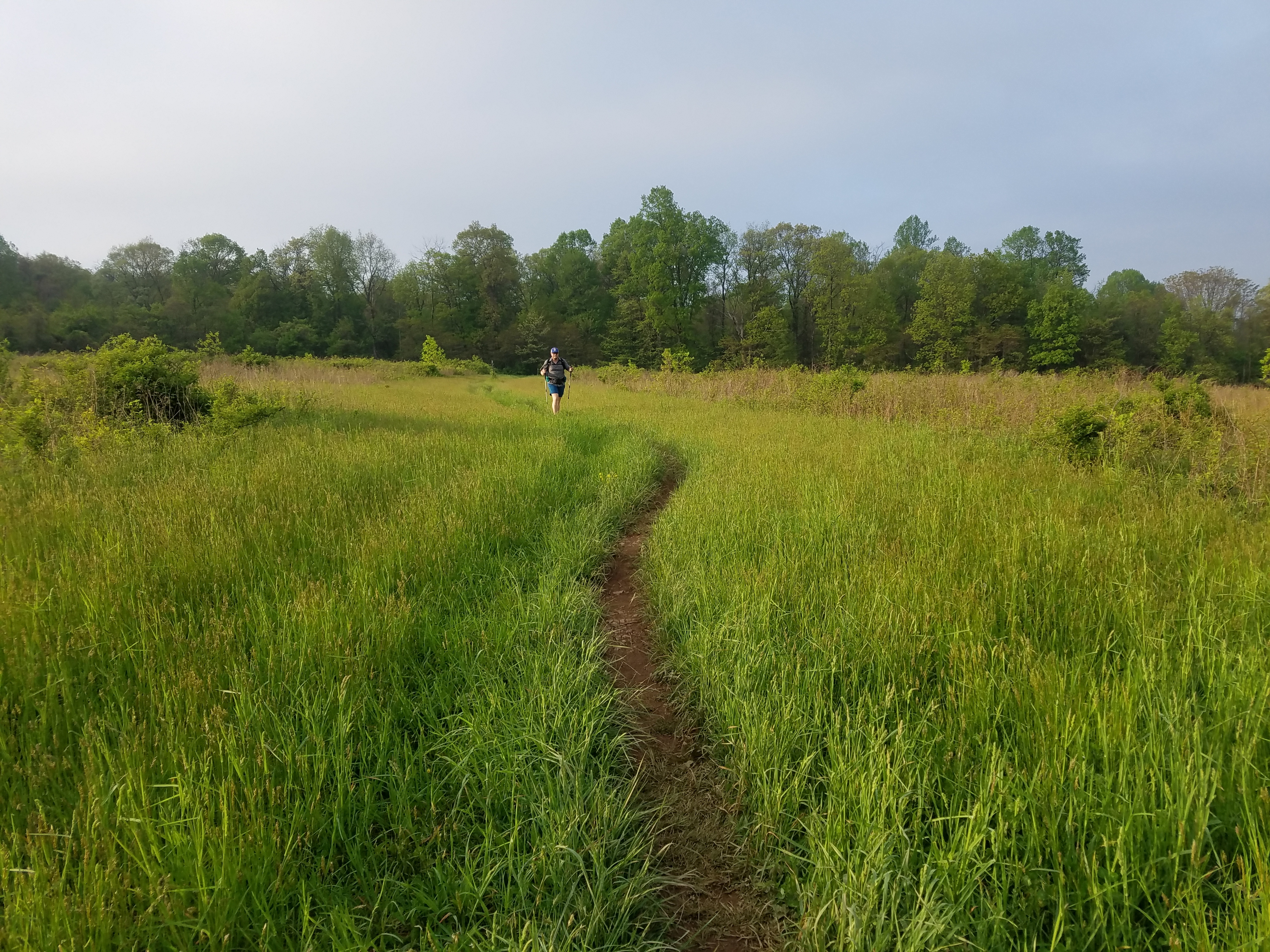 Returning to the trail after six days off proved to be more of a struggle than I had anticipated. Our flight back from Washington (state) had been a relatively sleepless red eye, and neither of us really managed to catch up on rest. 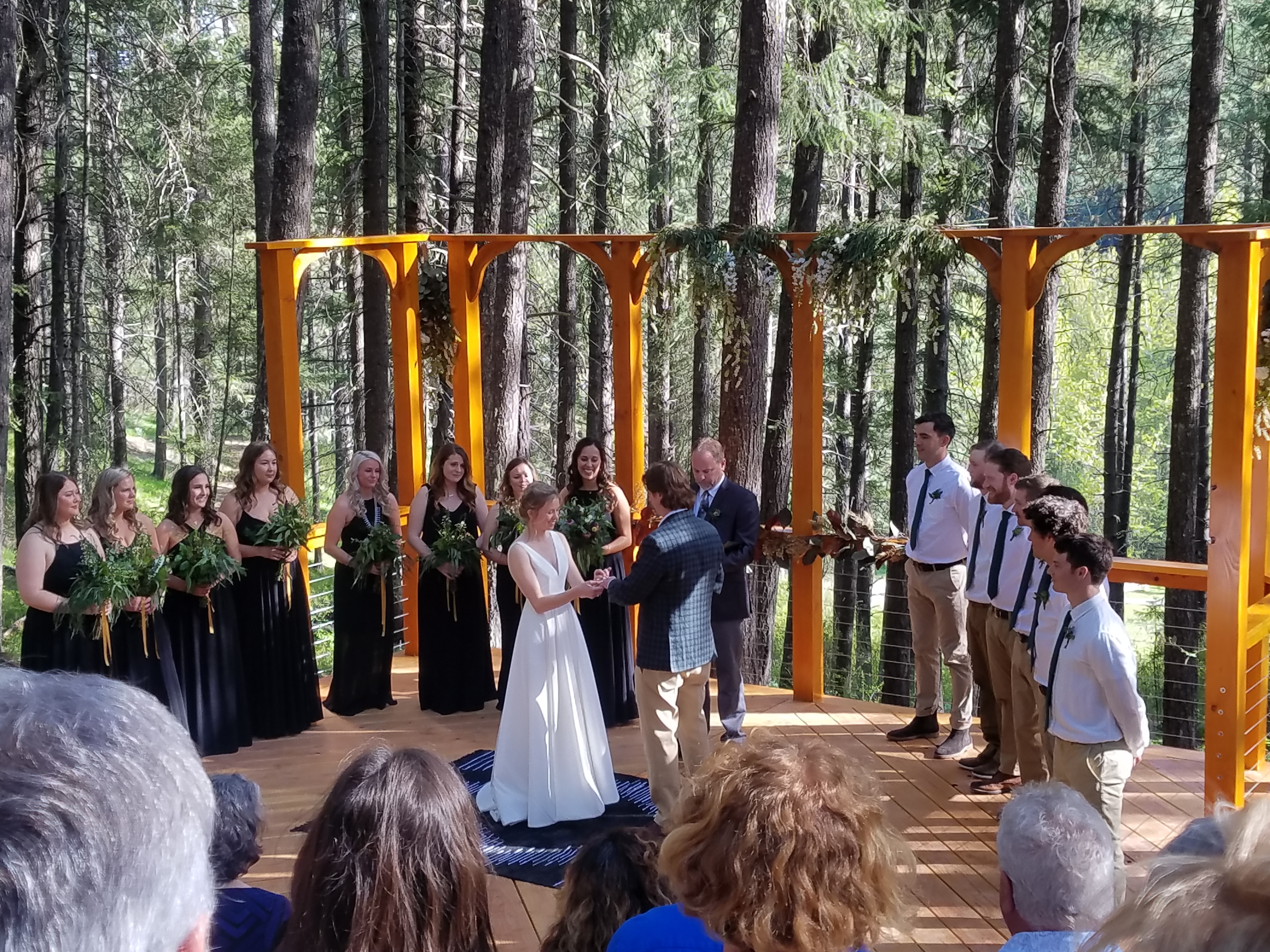 Beautiful wedding in a beautiful place! Cheers Spencer and Kayla!

The walking was pretty even and easy heading south from PenMar Park, but I felt exhausted and overwhelmed. It wasn’t long before I went into trail breakdown/tantrum mode. Exhaustion led to not wanting to hike that day, to feeling frustrated and guilty about not wanting to hike, and continued spiraling into other negative introspection regarding myself, my relationship, and the whole thru-hike attempt. We also discussed the next wedding’s schedule, and realized it probably wouldn’t go as smoothly for us as we’d hoped due to a miscommunication with what Garrett knew and what I’d planned as a result. Cue a pretty moody afternoon. 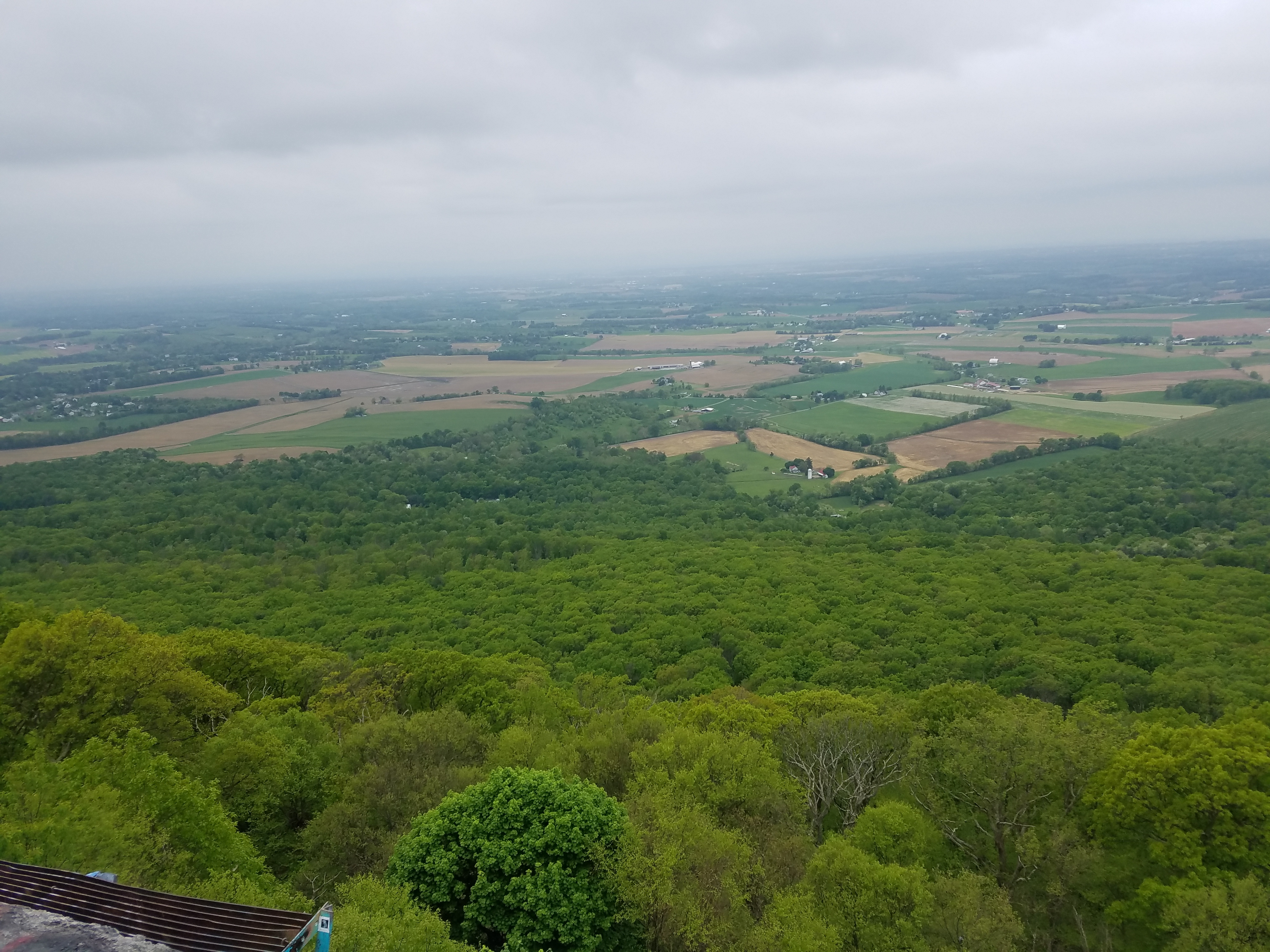 Our second day back on trail started out foggy and somewhat gloomy. 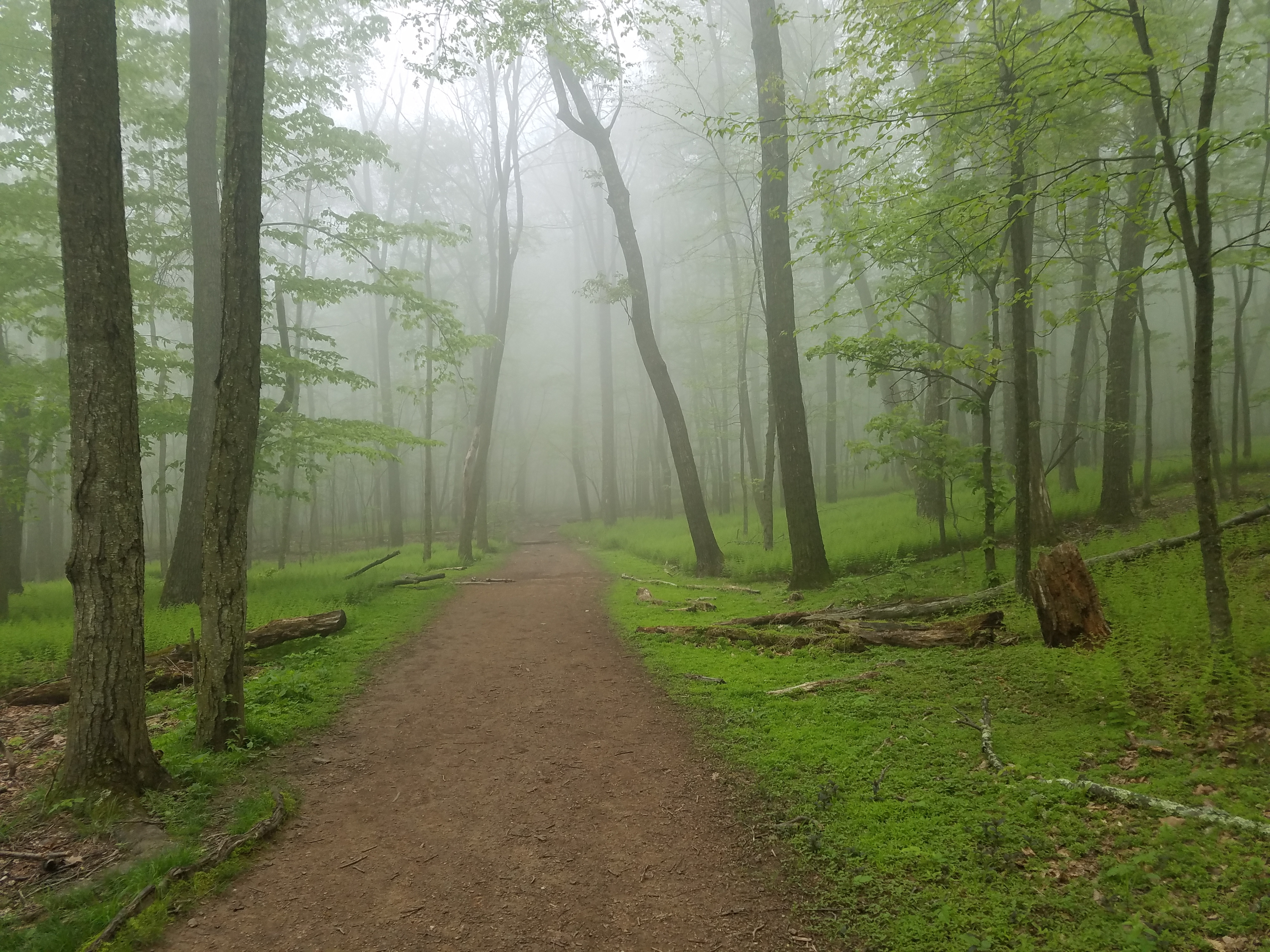 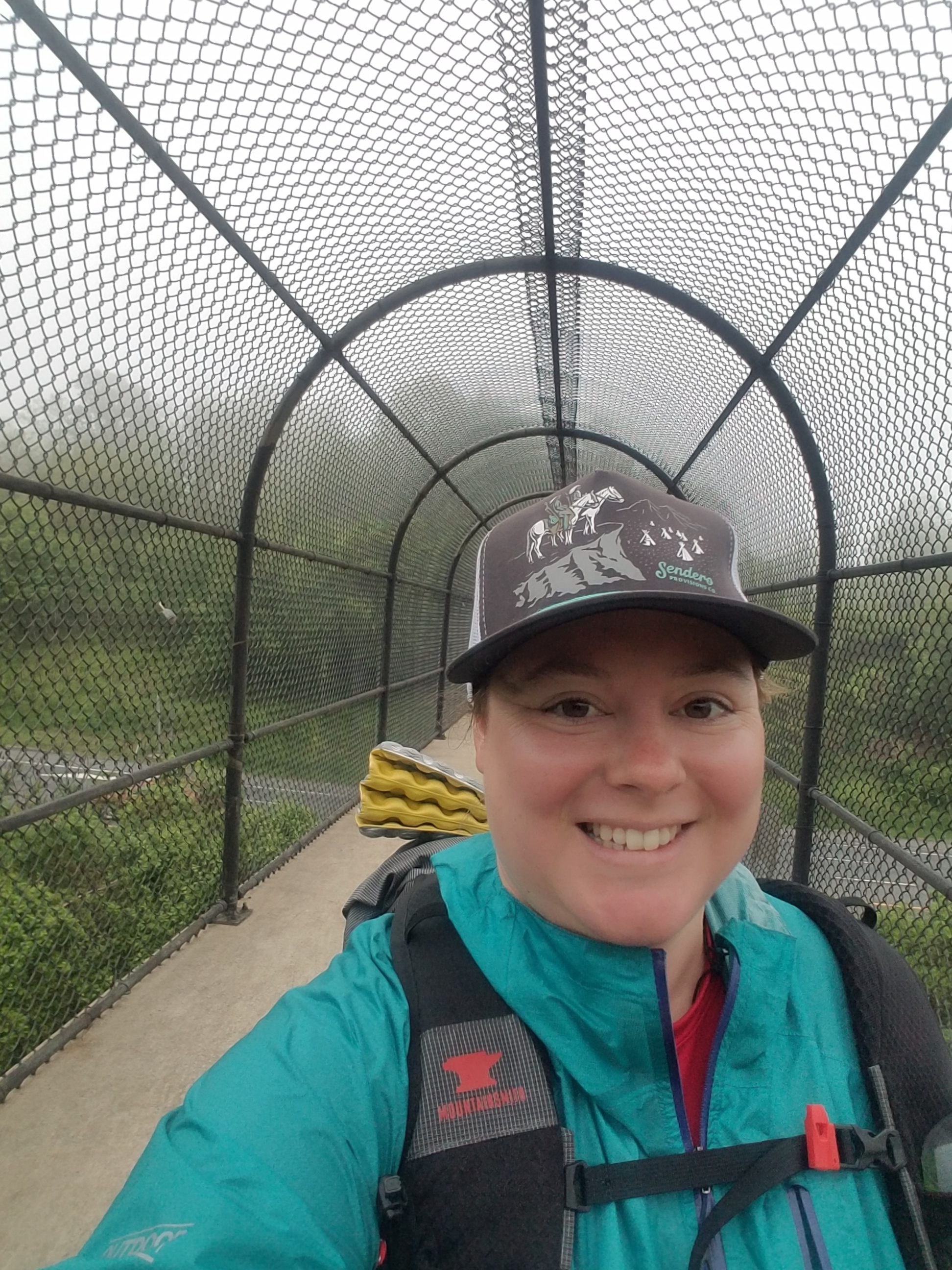 When you go through a caged highway bridge, you take a trashy selfie

Afternoon sunshine emerged as the trail led us through a lot of historical Civil War areas and into Washington Monument State Park, where the monument was under construction. We enjoyed the use of real bathrooms, water spigot, and trash cans in the park before moving on to Rocky Run Shelter. It was here that we met a couple of jokesters, Shin Splints and Five Sure. The two ex-marines were hiking together, had started at the end of March with basically no backpacking experience, and were smoking the majority of NOBOs by crushing 30+ mile days, aiming to finish by June 21st…we were blown away by their tenacity. We have since seen a picture of the two leaving Shaw’s from Monson, so we are assuming that they finished. A couple of the cooler hikers we’ve met out here, it’s always somewhat disappointing to part ways knowing you’ll never cross paths again.

Not With a Bang, But With a Splash

Little old Maryland couldn’t let us leave without a few challenges. Climbing out from Rocky Run we had a wet morning that soaked us and the thick vegetation along the trail, prolonging our own personal soakfest and frustrating the hell out of me. The sun did poke out midday for a while, creating a muggy atmosphere while sort of drying us out until our lunch break at a shelter. 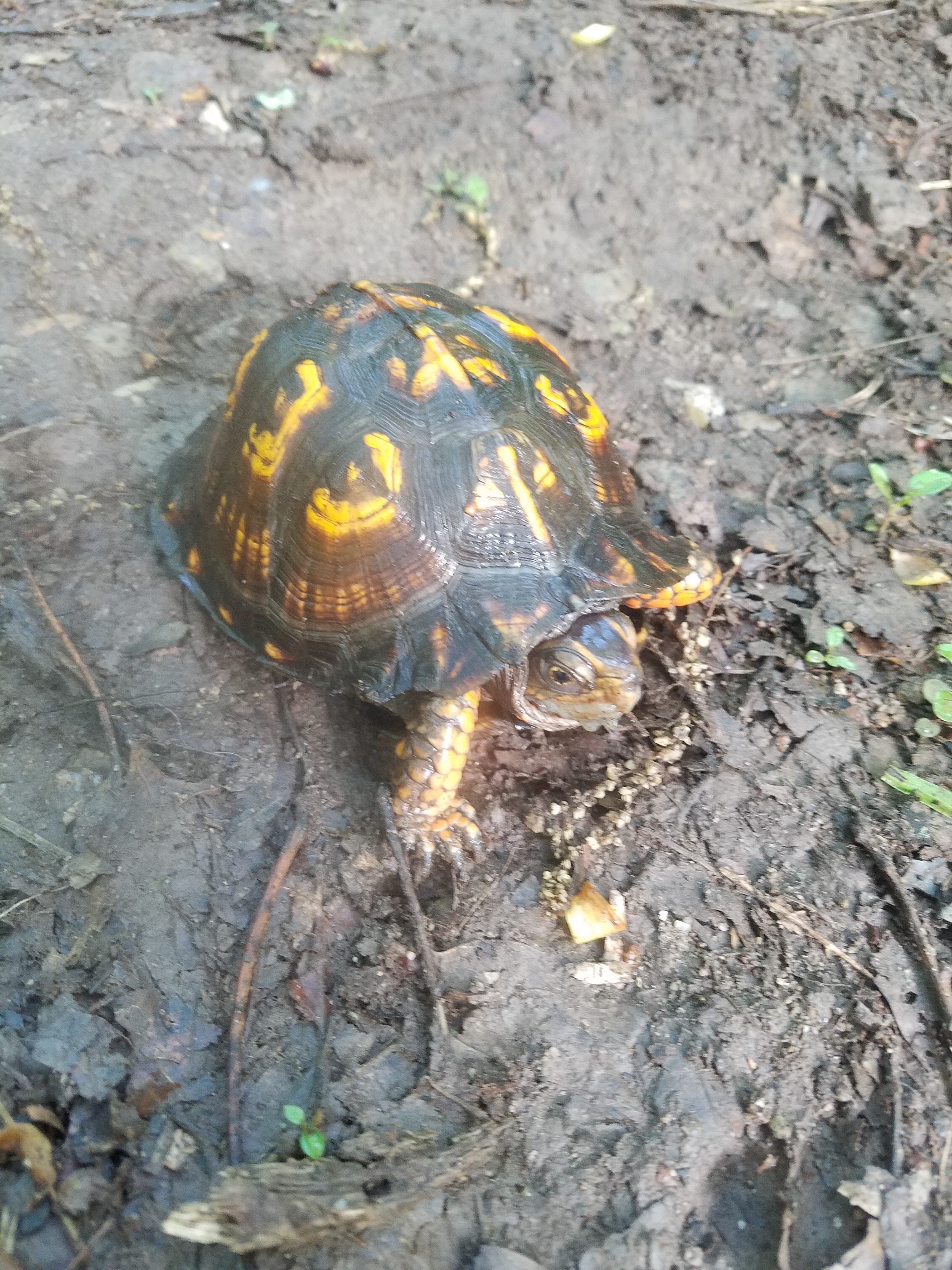 This guy knows you gotta snag the rays while you can!

The sun didn’t last long after we resumed hiking, and we huddled beneath a small leafy tree as the first drops began falling from an afternoon storm. A little too late we realized that a torrential deluge was upon us and got fairly wet trying to put our rain gear on quickly. The trail instantly flooded, pools forming amongst rocks and in the shallow depression that thousands of feet have pounded into the ground over the years. A short game of rock hopping and trailside edge-creeping later, and we both hit the “fuck it” moment, sloshing straight through the water instead of slowly maneuvering around it with increasingly wet feet. We missed out on the view from Weverton Cliffs on our descent towards Harper’s Ferry due to the weather, something we had been looking forward to. The main thing saving us from despair during the all out downpour was the fact that we would be staying indoors at a motel. 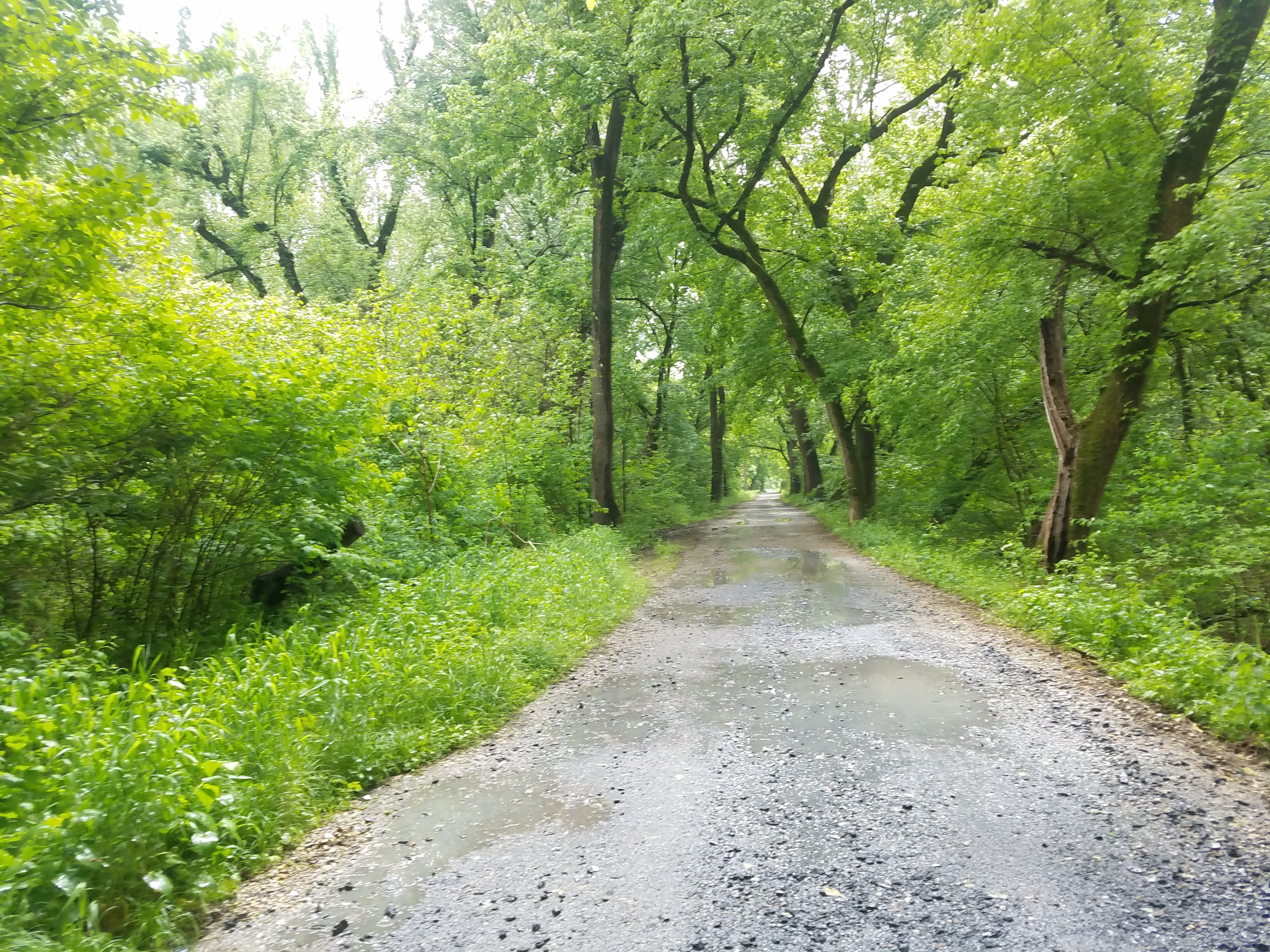 Puddles remain – the C&O path after the storms passed

Once the rain moved off, the rest of our day down to the C&O Canal towpath and the following few miles passed quickly. We found easy enjoyment in the towpath section, which bordered an algae-covered swamp full of turtles of all shapes and sizes on logs. 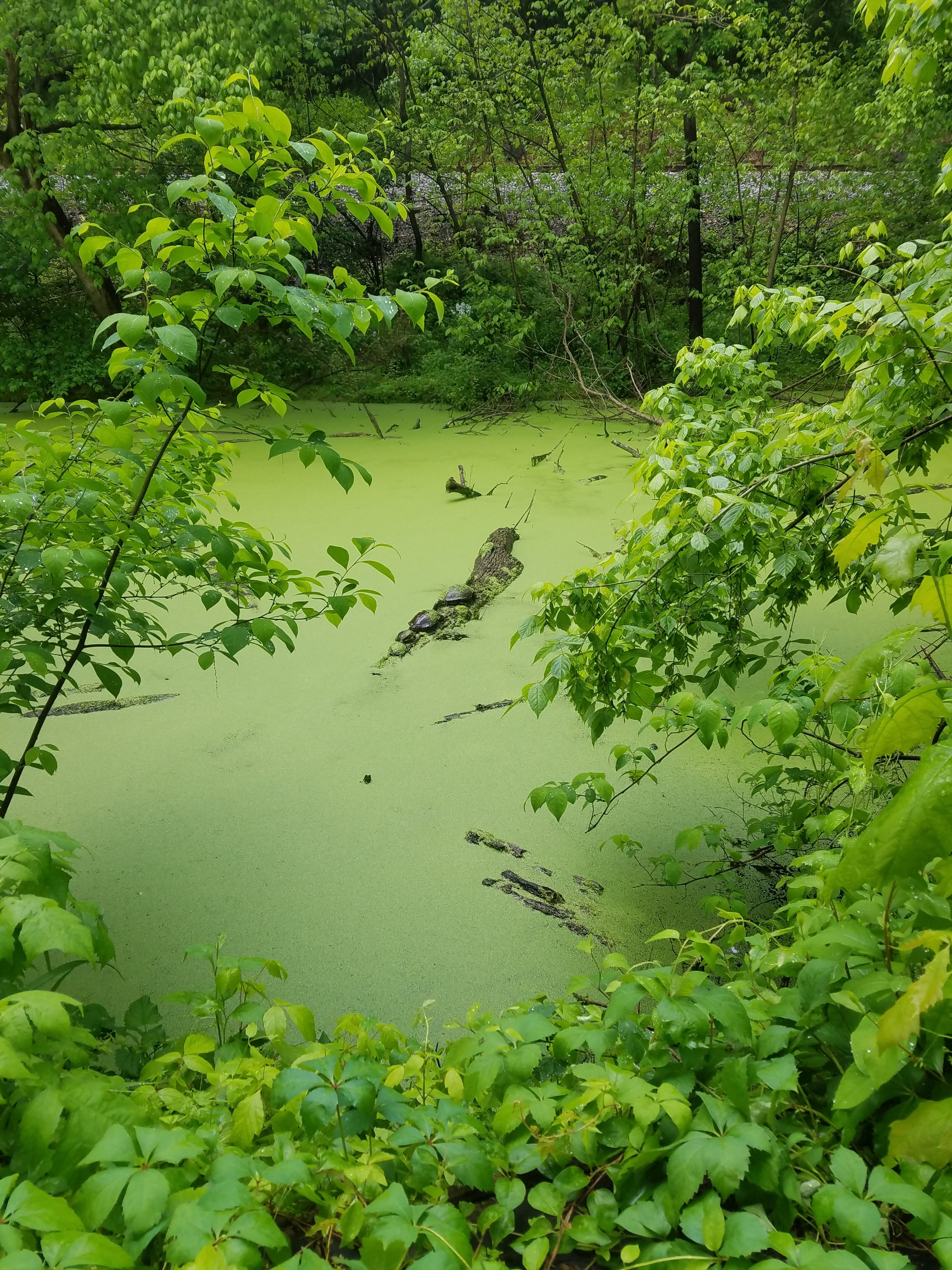 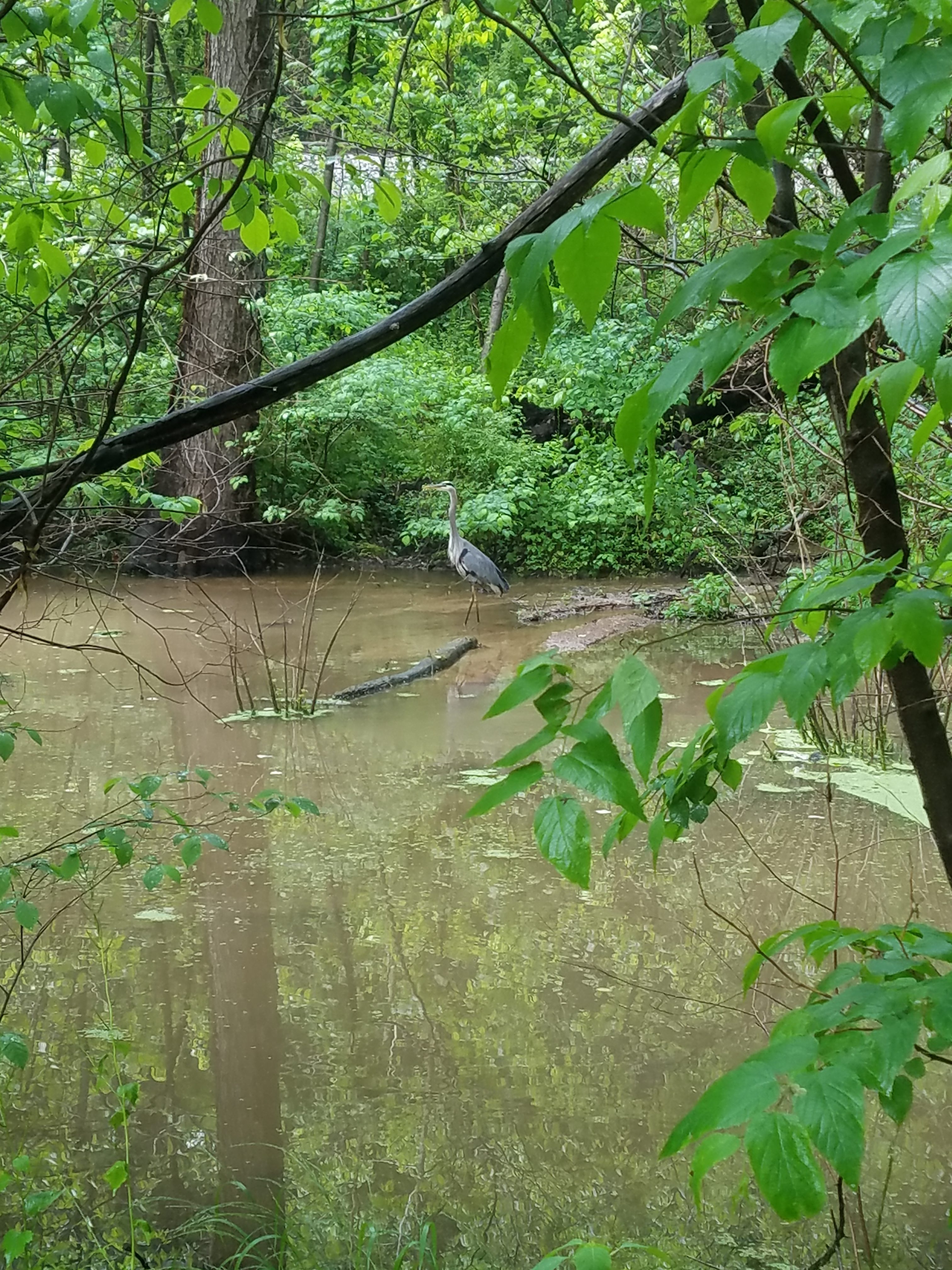 To reach the motel we had a reservation with, we took a side trail for a somewhat new hostel rather than walk the busy highway.  This goat-path style trail drew us across the railroad tracks and led straight up a crazy steep embankment to a back road. The trail was so sharp that a rope had been installed for a portion of it. Got a view out of it though… 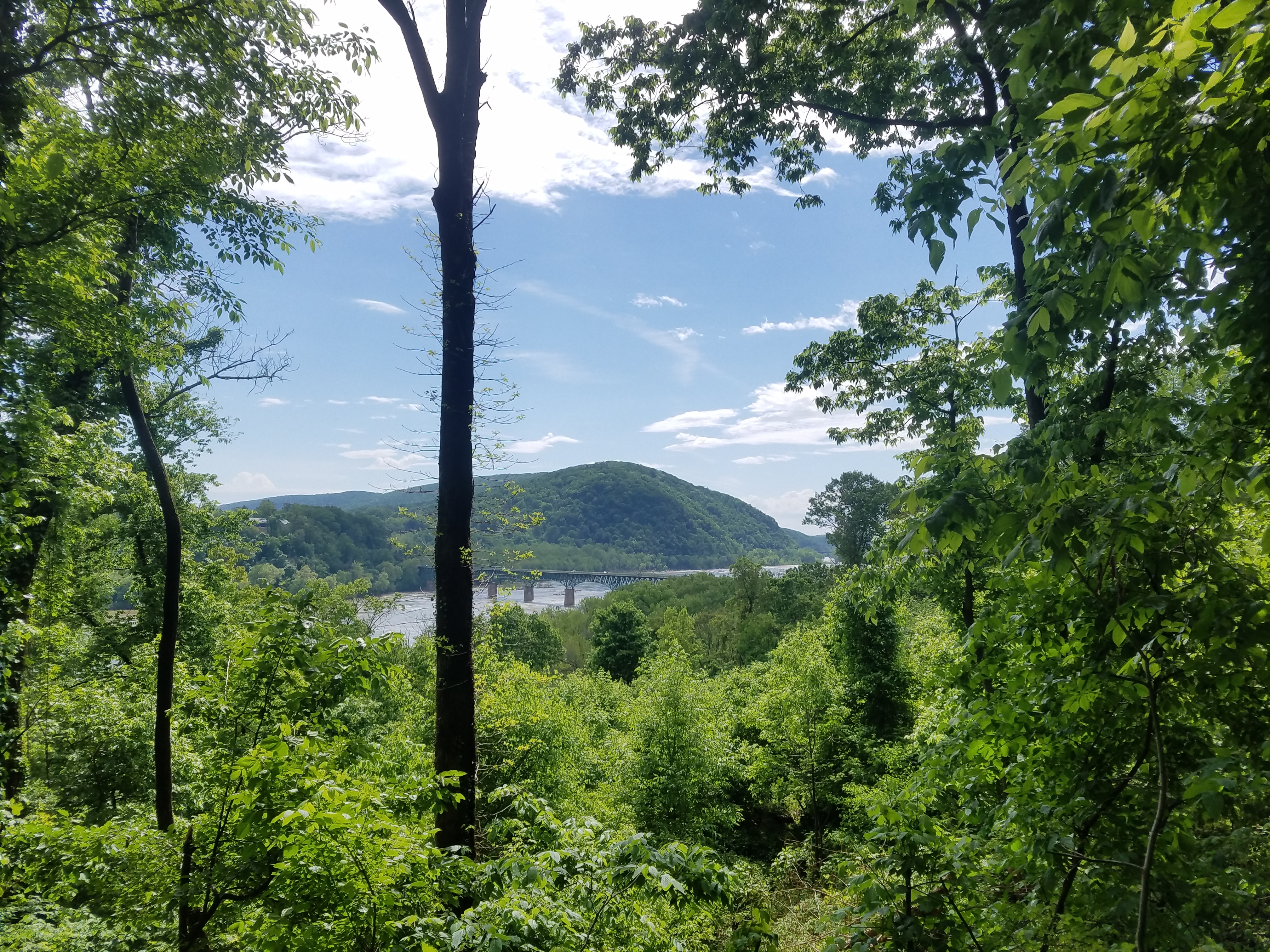 We road-walked up to an intersection and hung a left, heading downhill to one of the most hiker-friendly motels out there, the Knights Inn of Knoxville, MD. Our room was upgraded to a larger size upon our arrival (once they realized we were hikers) so that we could spread out all our gear. The owner gave us water and bananas in the office before we were taken to our room. There was also a covered brick walkway and porch area in front of the bank of rooms that was perfect for airing out our soaked stuff, especially convenient as it was in direct sunlight for a few hours until the rain arrived again.

Washing off mud and sweat, and being able to dry off and stay dry, was really a treat, made even more awesome by the delivery meal we called in of fresh salad, fried shrimp with fries, onion rings, and a spaghetti dinner.

Some Kind of Detour

The next morning, I noticed some messages from my close friend Ben, aka Marching Band, whom I’d met while in Monson, ME at Shaw’s in 2015, after I flipped up from Harper’s. He had also been headed SOBO with another hiker named Gingerbeard, and we inevitably formed a little trio of companions until we reached Rangeley, ME and turned work for stay duties into our winter job. 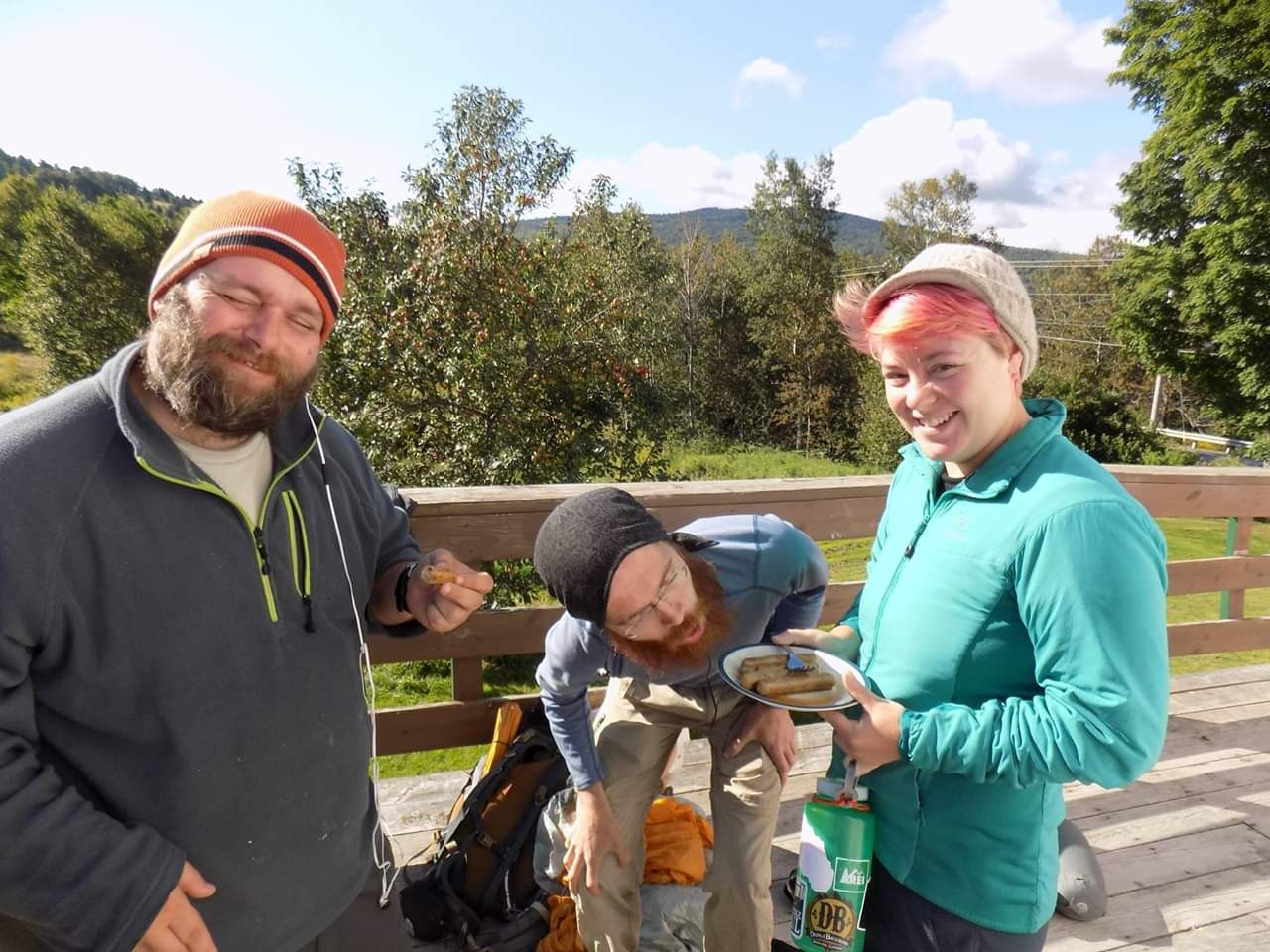 Marching Band, Gingerbeard, and myself in 2015. Who wouldn’t want to hike with these weirdos!? Photo cred: Casey Anne

Ben had informed me that he would be in the area visiting mutual friends in Shepherdstown, WV, around the same time that we’d hit Harper’s Ferry, which is basically the next town over, and said that he wanted to hang out. Next thing I knew, Ben appeared outside our room and we had a mini reunion. He offered to slackpack us through Harper’s, take us up to the ATC to retrieve a package and get our pictures taken, and then drive us over to Shepherdstown for lunch and to stay at our friend Bea’s.

We wasted no time and slacked from yesterday’s stopping spot on the C&O Canal towpath, following that for a couple miles to the famous train bridge that crosses the Potomac River into Harper’s Ferry, complete with a footbridge for pedestrians that is the actual AT. 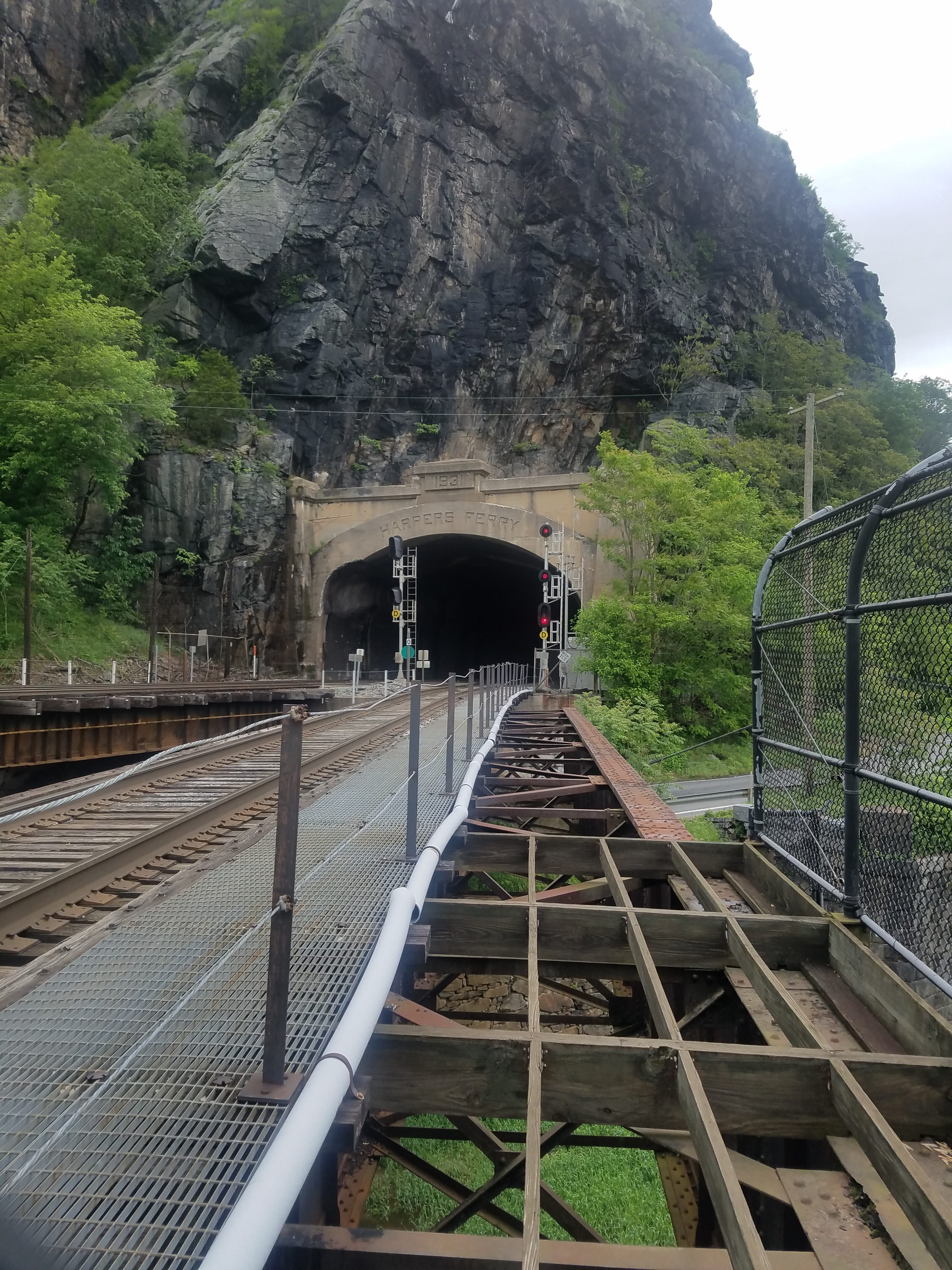 From there the walk through historic Harper’s is a bit of a stroll into the past, as it winds upwards between old houses and outbuildings, up steep uneven stone stairs, past an old church, and finally by Jefferson’s Rock before side-hilling over and down to a parking area by the highway bridge over the Shenandoah River, which the AT also crosses before the trail finally dips back up into the woods south of town. 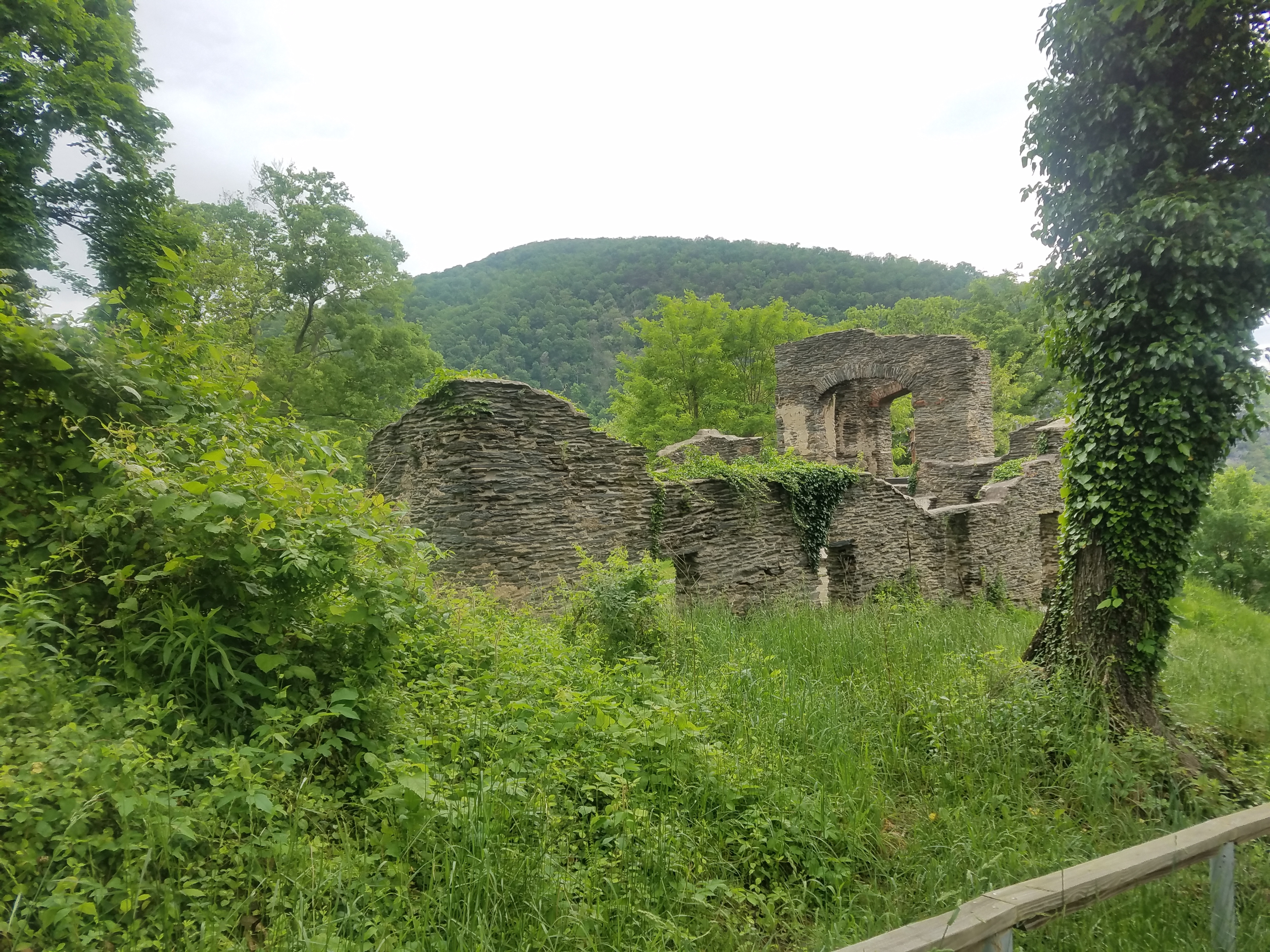 We met a sleeping Ben in the lot, and after waking him up from his nap we drove up to the ATC. Ben had driven thru the night from Alabama to get to our neck of the woods, so he was understandably slightly zombieish. As soon as we walked into the ATC we were immediately led back outside to get our photos taken. We filled out the photo with our info: the date we started our thru-hike, the date we arrived in Harper’s, trail names, hometowns, hike plans (NOBO/SOBO/FF), and email for contact, and put it in the binder for this year. Our numbers in the flip-flopper spectrum were 183 and 184.

I also had mailed a package to the ATC, but they did not have it. Someone working there phoned the post office, and we were informed that we could wait for the ATC to go get it, or we could just go get it. It hadn’t been delivered because I failed to add my name in the “to” section, addressing it only to the ATC, though I included my name and hold for thru-hiker on each side of the box. It was definitely a nitpicky scenario, but we drove over and grabbed the package, and I learned a lesson that I won’t soon forget about how to properly address a mail drop.

From there we continued to Shepherdstown, parked at Bea’s, and made a beeline to Maria’s Taqueria, home of some of the best Mexican style food around, grabbing a filling lunch of fish tacos. Another shop not to be missed is Mountaineer Popcorn Company, where I was sure to purchase a huge bag of jalapeno cheddar popcorn as part of my resupply. 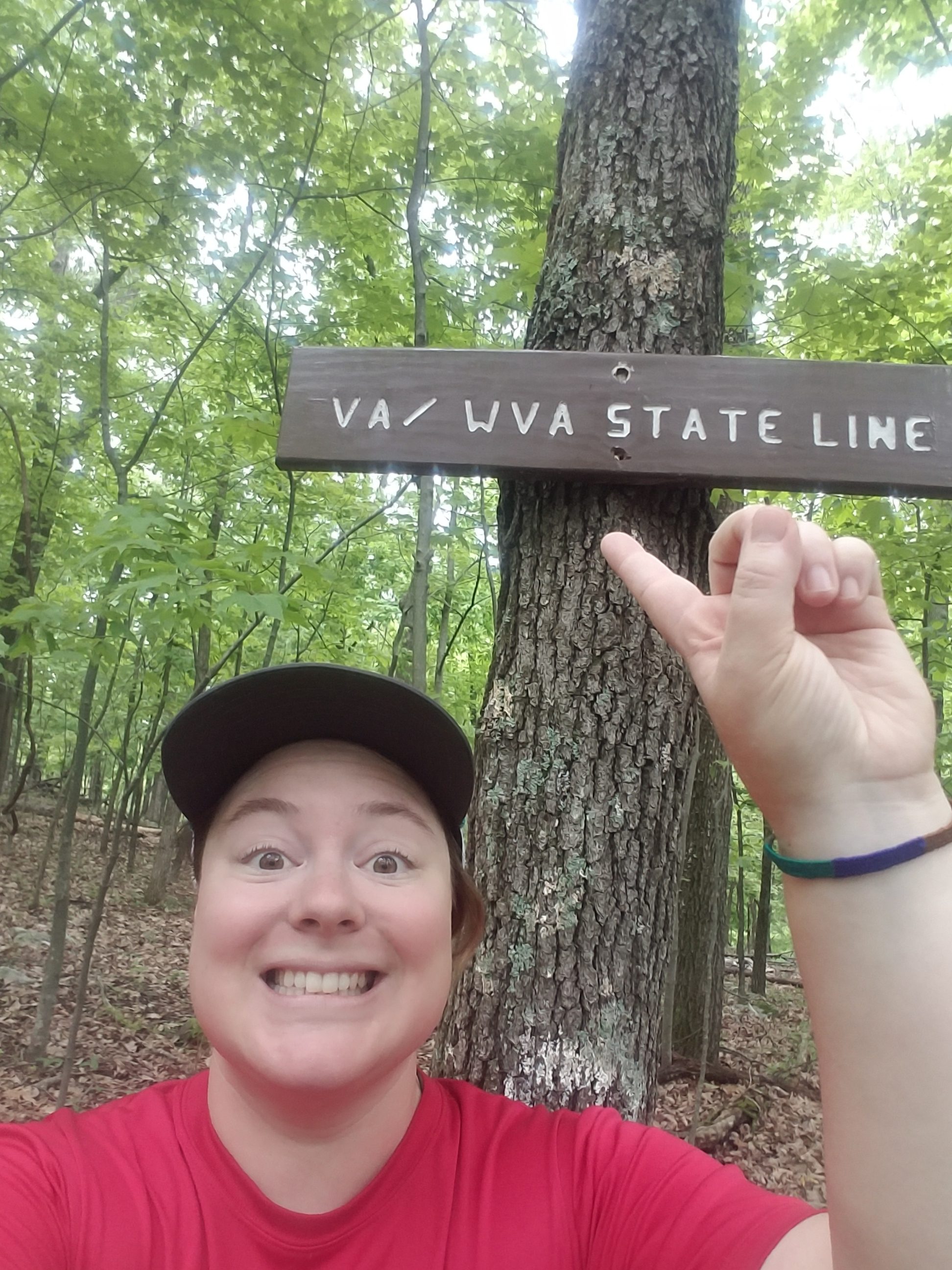 We ended up also slackpacking a short 5.5 miles that afternoon, heading north from Keys Gap back to Harper’s again where Ben once again picked us up and we returned to Bea’s. During this little jaunt we passed the WV/VA border sign, and had knocked off our second complete state after MD. Our evening consisted of hanging out with Bea’s friends and eating some amazing veggie food that Bea whipped up while we slackpacked, including black beans, quinoa, roasted asparagus, and a vegetable medley of collards, kale, red cabbage, with microgreens on top, so epic! 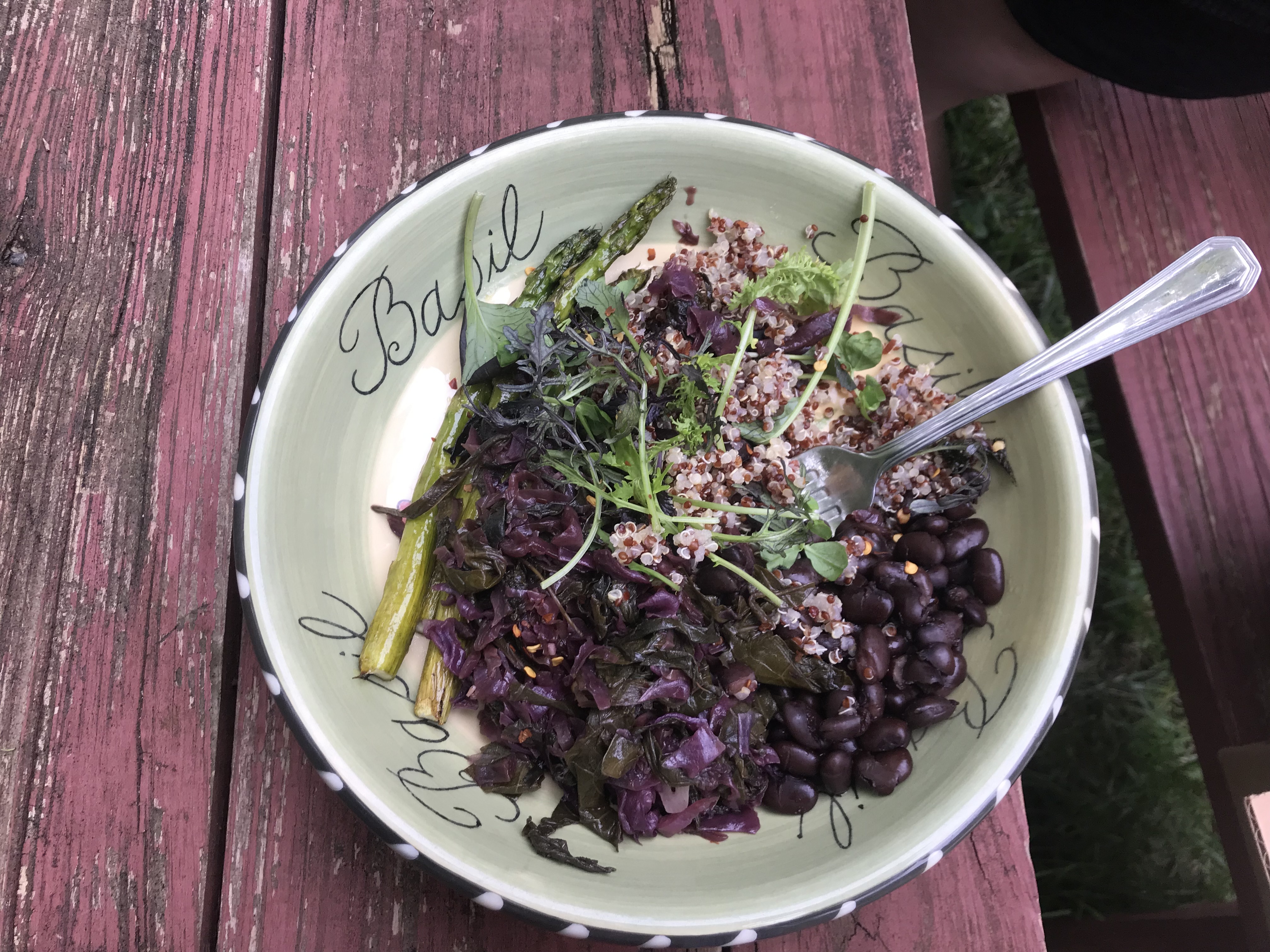 The next day we were lucky enough to slackpack again over 13.6 miles from Snickers Gap to Keys Gap NOBO, and we counted our stars that day as it turned into a rainy, windy, raw experience in the 40s where we nearly had some physical issues due to the cold, Garrett in particular. If we’d been this cold and wet and had to camp or stay in a shelter, I don’t think we would’ve fared so well mentally or physically as we did knowing we were returning to a house with a hot shower and dry, warm clothes. 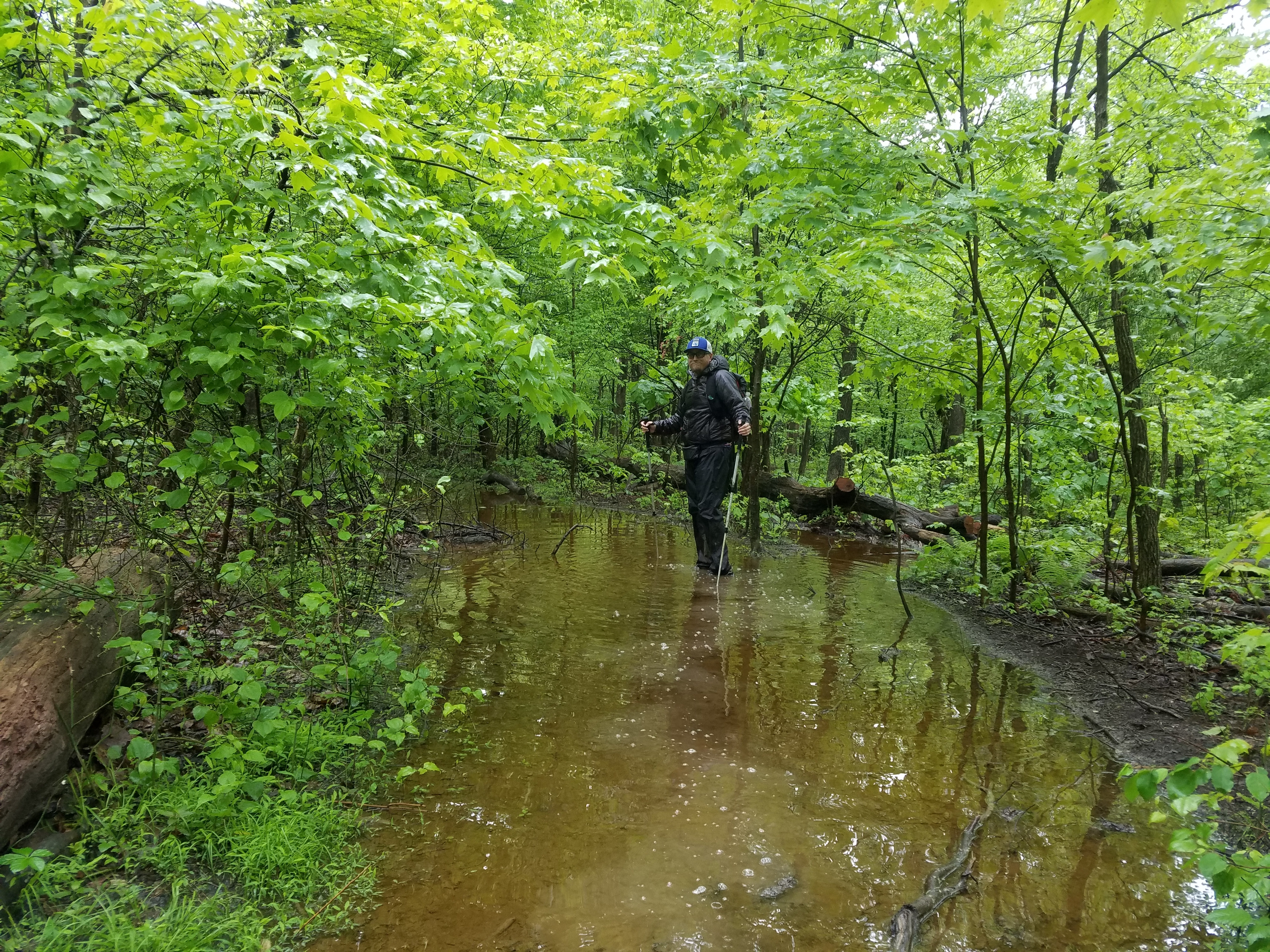 Garrett showing the scale of how flooded the trail was on our slackpack.

Ben managed to pick us up with hot coffee, and saved our souls. Dinner was Bea’s doing again, macaroni and cheese and some awesome potato salad. Here we finally began to catch up with watching the newest and last season of Game of Thrones, as Ben and Bea were up to date and the latest episode would be airing that night. We commenced binge-watching the show, and made it through all available episodes and went to bed around 1am, with a break somewhere in there to call my Mom and Nana for Mother’s Day. The following day we would be picked up by my mom and head back to my parents again to get ready for another side adventure, this time going north to wedding number two in Massachusetts.