AT Hikers Now Required to Use Bear Containers, Bear Hangs in Most of Vermont

The Green Mountain National Forest, which includes an Appalachian Trail shelter where a bear was killed after raiding hikers’ food, is now requiring all food to be stored in bear-resistant containers or suspended from a tree 12 feet from the ground and at least six feet from the tree.

The order, announced Wednesday, July 24, and also requires hikers to carry out all food trash.

The Green Mountain Club, which maintains the Appalachian and Long trails in Vermont, said Ursacks are acceptable, but could become unacceptable if the GMNF finds issues with them. The club recommends that an Ursack be used  with the odor-proof OPsacks.

The move comes nearly two weeks after Vermont game wardens killed a bear that aggressively sought hikers’ food at Goddard Shelter, a heavily used camping area on the Appalachian and Long trails in Southern Vermont. The shelter was briefly closed.

The GMC said on its Facebook page that a bear looking for food tore apart the shelter privy, took two backpacks from hikers, and destroyed two tents.

The club said earlier efforts to prevent bear encounters, including installing a bear box and removing trash near the shelter, did not work.

The Bennington Banner reported that the wardens who went to the shelter felt they had no choice but to kill the bear on July 12.

“The bear was showing no fear of humans at this point,” Lt. Dennis Amsden, a game warden in the Vermont Fish & Wildlife Department, told the Banner. “Human safety was now at risk, so we felt it was necessary to put the bear down.”

Trek blogger Ruth “Chocoholic” Morley was at the shelter during one of the bear encounters, and wrote about it on her blog on Tuesday, July 9.

“There was a good crowd staying in the shelter and camping on the grounds, despite the warnings online about frequent bear presence. Yep, here came one around 7 p.m., within eight feet of the porch of the shelter! 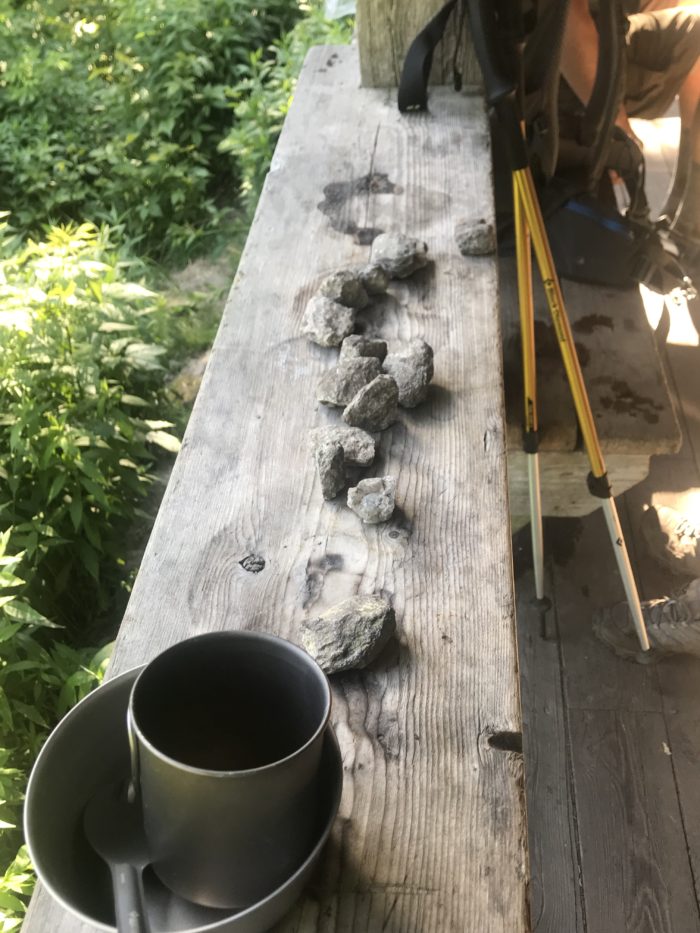 “Previous campers had lined up over 40 rocks along the walls of the shelter and on the shelf intended for food prep.

“When Bruno just kept advancing and didn’t run from our shouting, folks began throwing the rocks right at him. One good hit finally got him to head away, but not far. The privy was his next potential food mart. After tearing up the plastic-covered bale of sawdust outside the privy (used to help activate the composting toilet), he ripped off the simple little lock on the door and wreaked havoc on the interior of the outhouse. Another bale of sawdust was ripped into and the toilet itself pulled out of the floor. I have heard of some campers putting food waste in the pit, not knowing this was Bruno’s secret deli. I managed to get these photos by hiding under a nearby bush and hoping for the best. Don’t do this at home, kids. 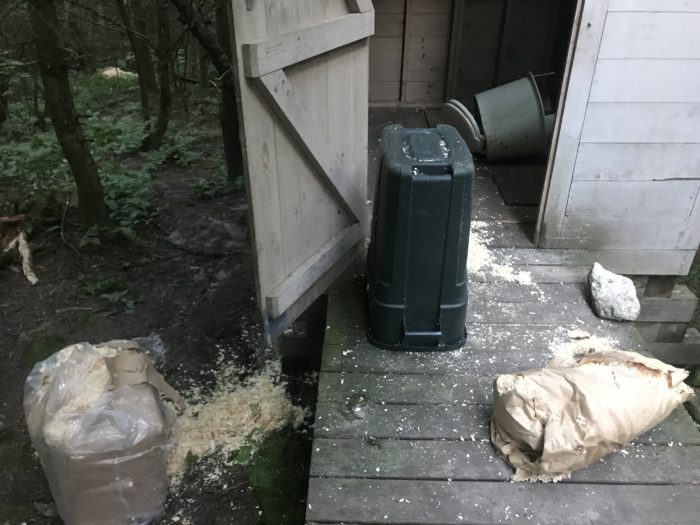 “With a lack of a good snack, he finally sauntered away, but you can bet we were ready to get out of there quickly in the morning, the time frame when he had accosted the last group there. We heard that they had to grab their packs and run down the trail with their breakfasts in their hands.”

The GMC said bear encounters at shelters and campsites have increased this year, with the bears seeming to lose their fear of humans.

“This year we have had bear problems at Kid Gore, Goddard, and Stratton Pond Shelters,” the club said on its website. “The bears at these locations did not react or show fear when yelled at or when stones were thrown in an attempt to scare them off. They got into several hikers’ food supplies, ripped apart a privy that had a moldy loaf of bread thrown in it, and sniffed into a shelter one night—leaving only after a startled hiker smacked the bear in the head with a trekking pole.”

Bear boxes have been installed at Seth Warner, Goddard, Kid Gore, Story Spring, Stratton Pond, and Stony Brook shelters on the AT/LT, along with boxes at Montclair Glen Lodge, Hump Brook Tenting Area, and Bamforth Ridge Shelter on the Long Trail north of the trail’s split from the AT at Maine Junction.

The ATC recommends that hikers use a bear canister on the AT, or hang their food using the Pacific Crest Trail method. Food should be hung 12 feet from the ground and six feet from the overhanging limb and trunk.

Bear canisters are required on parts of the PCT. The Pacific Crest Trail Association says the bear population in California has increased from 10,000 in the 1980s to around 35,000 now, and that the bears’ range has expanded to areas where they weren’t previously seen.