Pushing Through the Presidentials

The Ethan Pond Trailhead surprised us with some much needed trail magic breakfast. Kim, a NJ resident who was on a roadtrip along the AT in his van, cooked up some pancakes and eggs for us. They were both undercooked, but we were hungry and didn’t complain. We learned that Kim did not like people from New Jersey even though he himself lives there. He started calling Peach Fuzz Jersey scum when he found out he was from there. I enjoyed the chaos Kim provided. 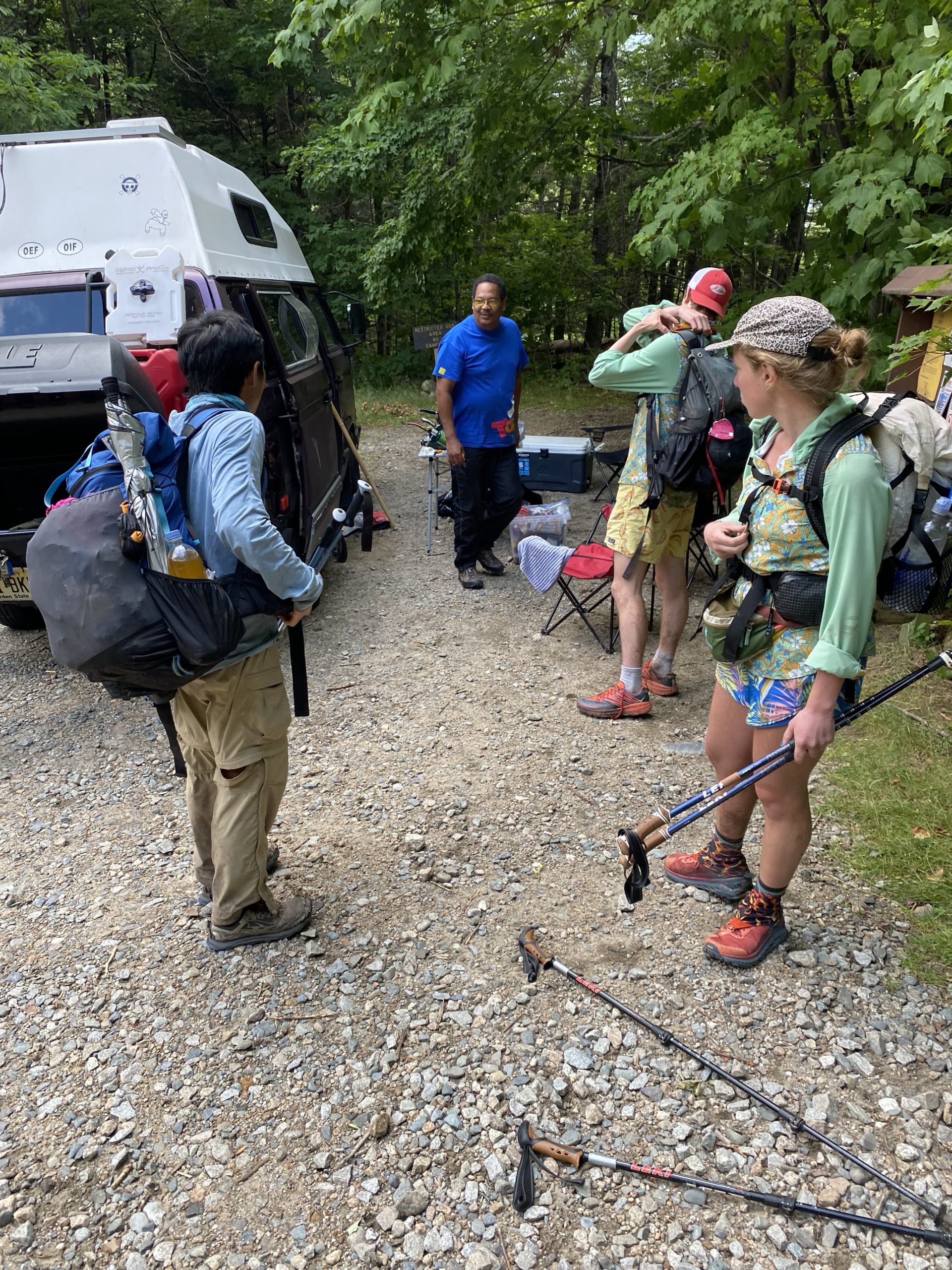 We said our goodbyes to Kim who became one of the more memorable trail angels we had encountered on this journey. As we hiked past the parking lot, the challenge that laid ahead of us became apparent: The Presidential Range. Mt. Webster greeted us at the road and beckoned us to climb its 2500 ft ascent. 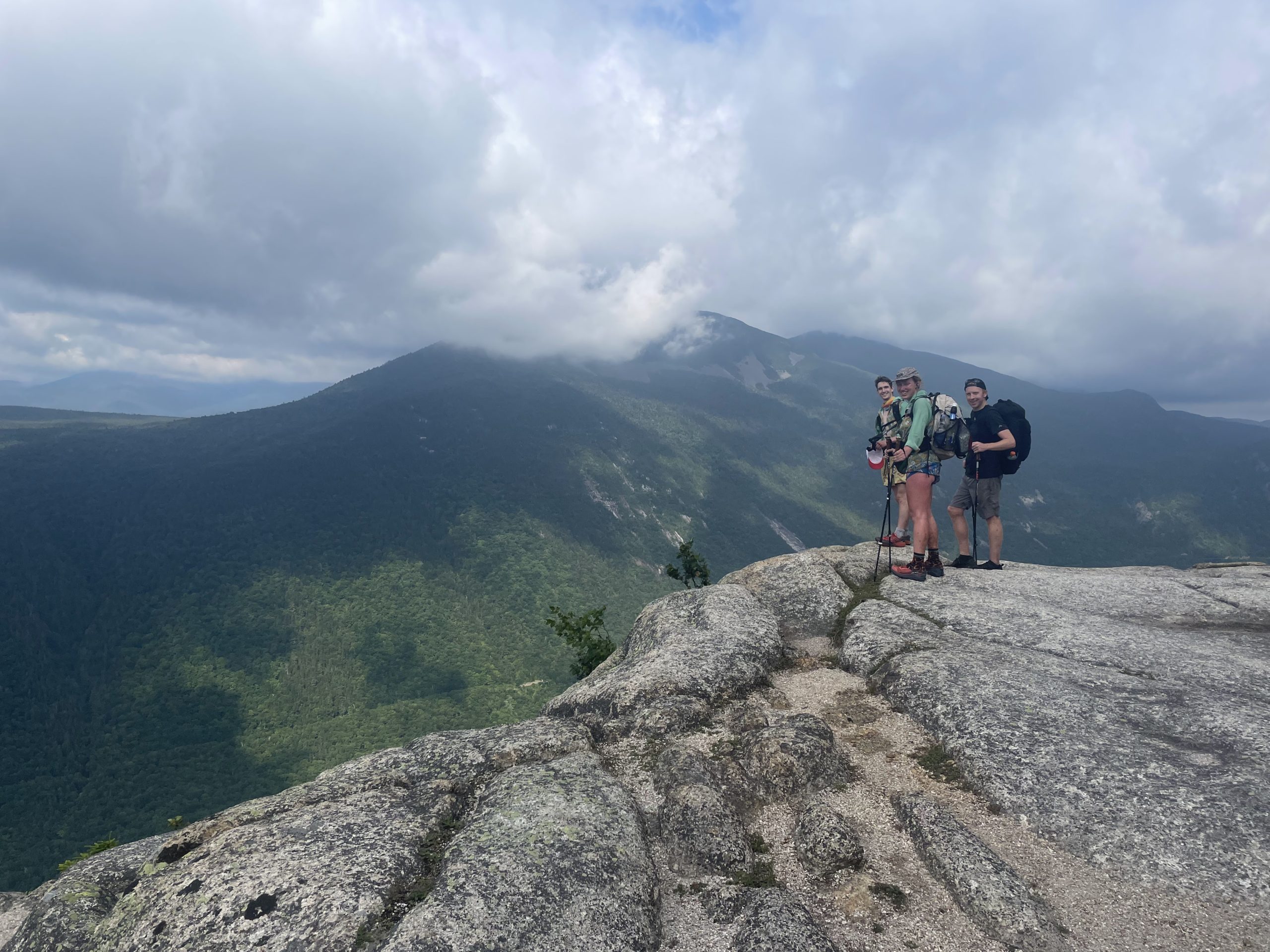 This was a false summit. Beautiful people.

After a many false and real summit and a quick visit to Mizpah Spring hut to check the weather, we found ourselves at the Lake of the Clouds hut. Mt. Washington was just in front of us so we took some time to eat a little snack and rest our feet before the big climb to the top. Before we started the push to Mt. Washington, a hiker who was going hut to hut stopped to talk to us. He had hiked the trail in 2019 and was curious to know where we planned on stopping today. We told him Osgood tentsites about 10 miles away from where we were at. Upon hearing this he scoffed and told us that from here to there would be “the worst miles on the trail.” Margaritaville and I looked at each other and both thought this was just another example of hiker hyperbole. Surely the trail couldn’t be worse than it already has been.

The climb to Mt. Washington wasn’t as bad of a climb I thought it was going to be. I actually was more concerned about weather than the actual climb. A dark cloud was making its way towards us but it actually missed our precise location and we were spared any bad weather. On Mt. Washington, we got beautiful weather. 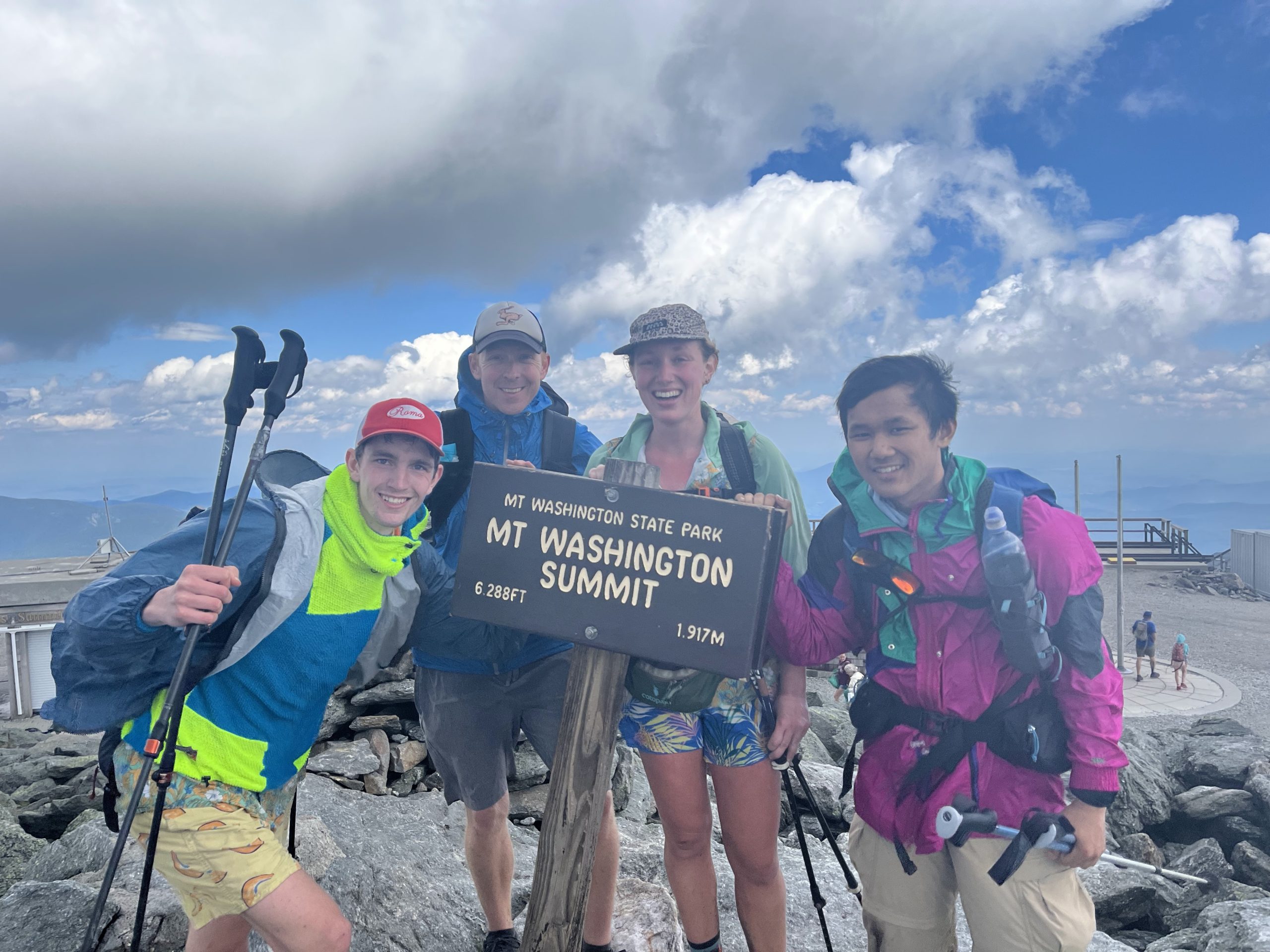 This was a special moment for me. 6 months ago I attempted to climb Mt. Washington in the winter via Tuckerman’s ravine. I did not make it to the summit. But I knew I would have another chance to get to the summit in the summer. 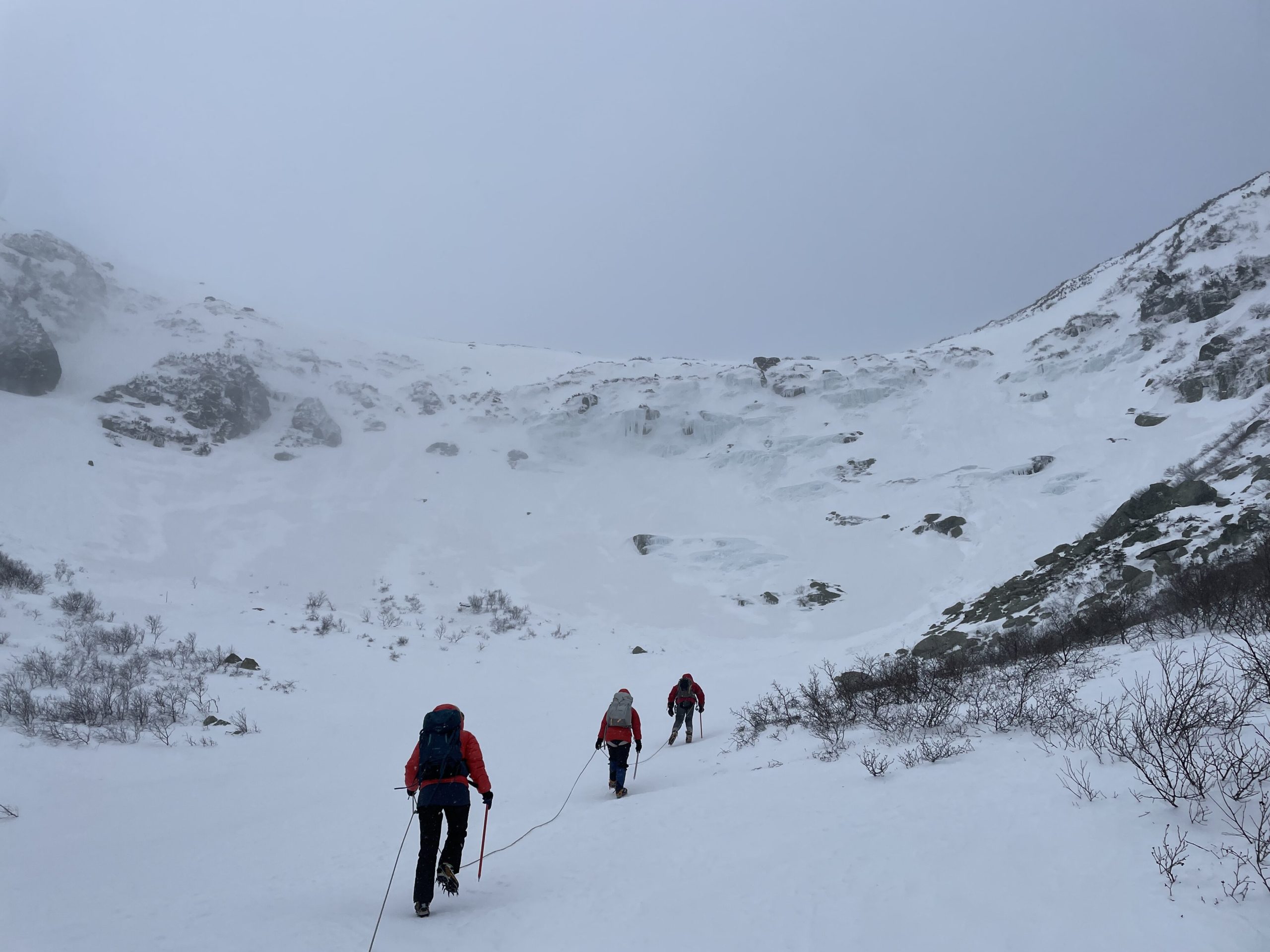 At the top of Mt. Washington we went inside to the cafe to reward ourselves for some deliciously sounding hotdogs. We all got two, but I ended up eating three extras because my other three partners couldn’t force themselves to ingest the cafe’s rubbery interpretation of a glizzy. I ate a total of 5 hotdogs, and I almost got the trailname Glizzy as a result. Luckily, the name did not stick. It was now 4:00, and we still had considerable miles to cover. 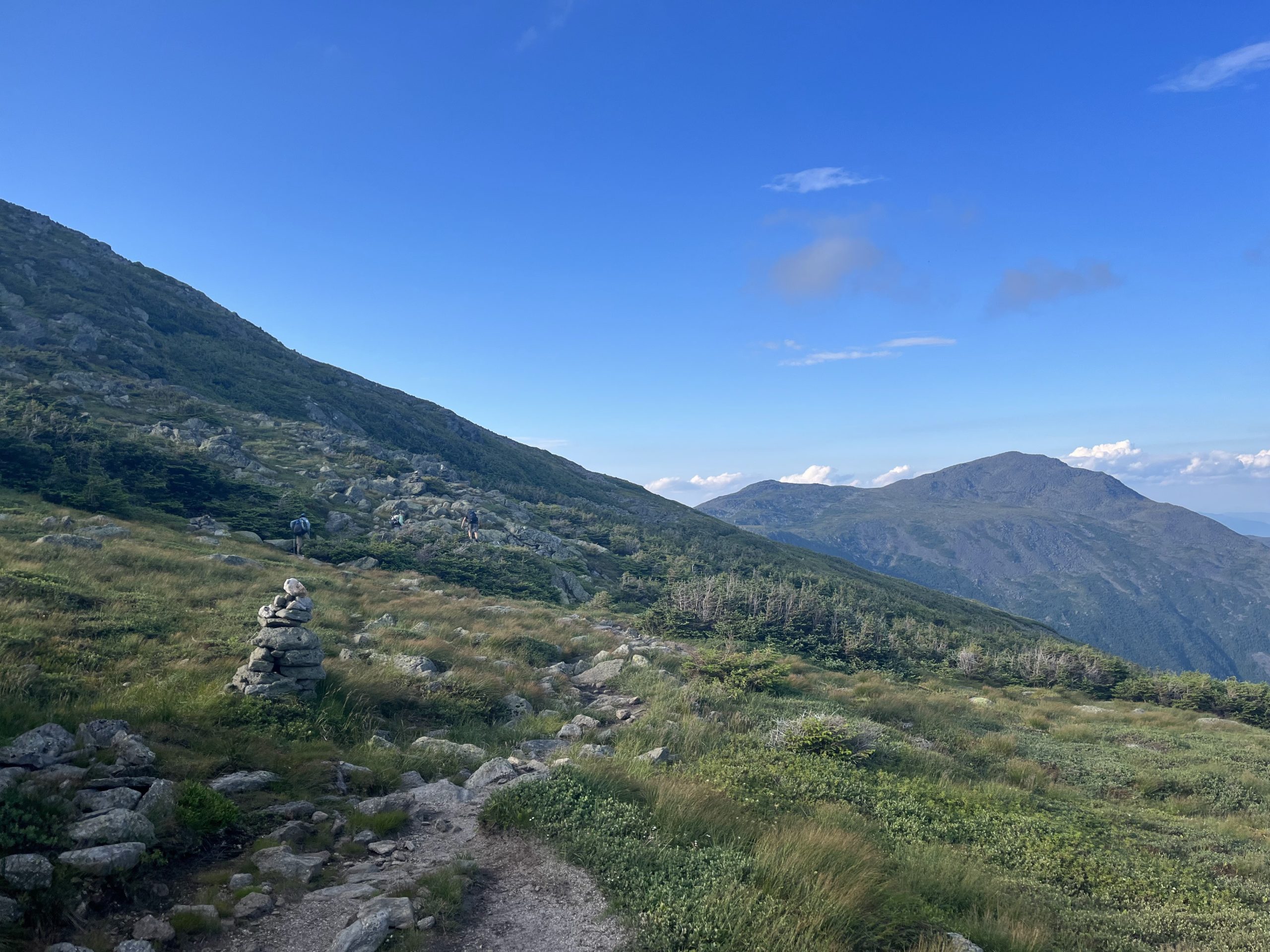 The miles from the top of Mt. Washington to Madison Spring hut were the toughest miles we all had experienced thus far. The guy who told us at Lake of the Clouds was not exaggerating. It was now 8:00, and we still had about 3.5 miles to the Osgood tentsites. We all wanted to call it a night, so we talked to the hut leader to ask about possible lodging. Our options handed to us were not what we wanted. We could either pay the $150 for a bunk (dinner was already served, so we would not get that), walk .5 miles to a campsite that was already full, or hike on over Mt. Madison in the dark. We were in a bind and unsure what to do. I realized that we had to make a decision immediately, especially if we were considering going over Madison because we still had some daylight. Being above tree line, we would have access to some extra light than if we were covered by trees. So I did my best to rally Margaritaville and Jackrabbit and we prepared to go over Madison. Peach Fuzz trailed behind because he was the fastest among us, and he wanted to continue to talk to someone at the hut who he apparently knew. 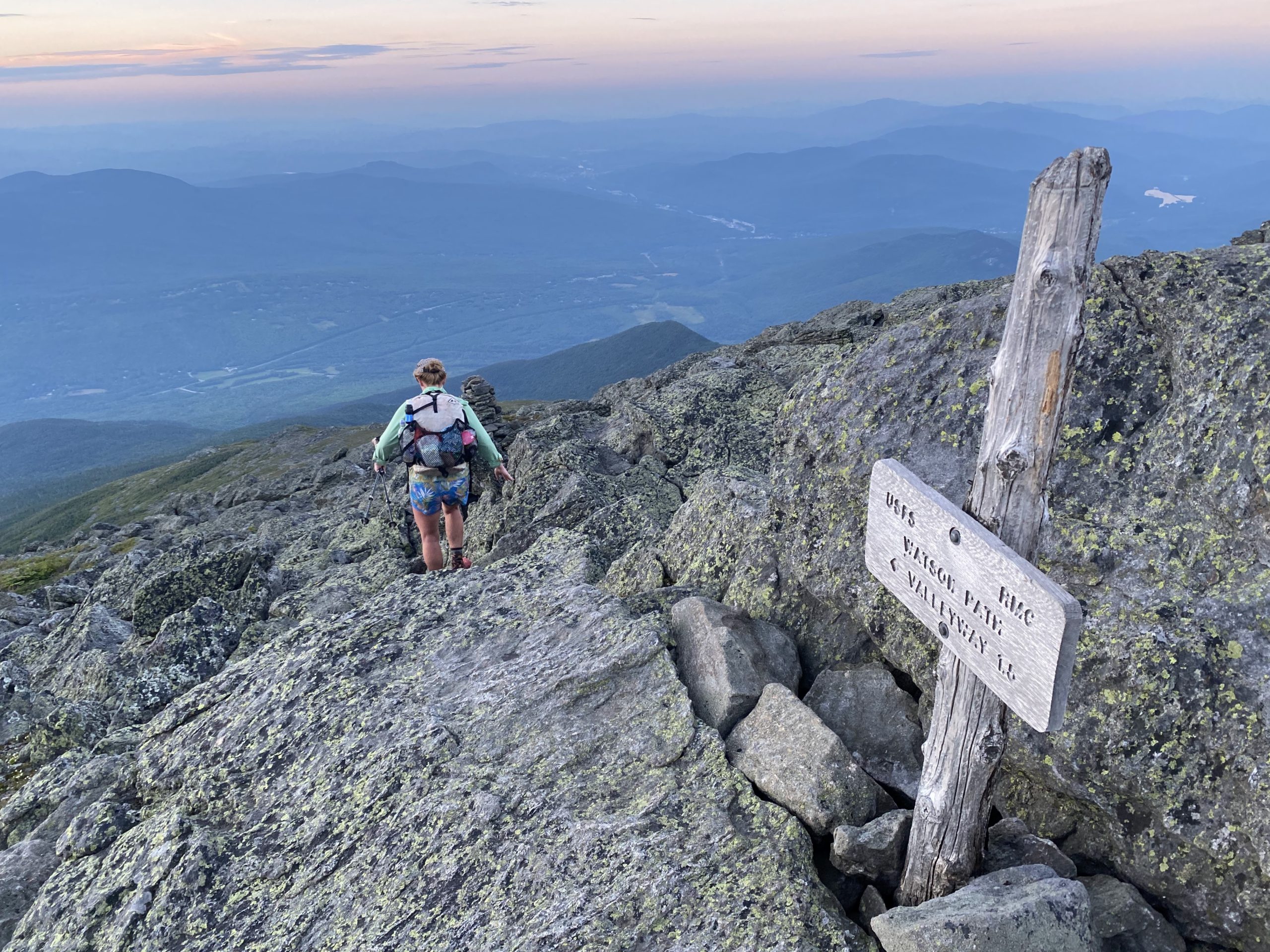 Terrifying. Brutal. No words to describe descending Madison in the late late evening. But it was pretty.

The climb up Madison was quick. But the descent felt like it was never going to end. I followed the wrong cairn path, and we had to backtrack because of my mistake. The sun eventually disappeared and for the last 1/4 mile above tree line, we had to pull out our headlamps and continue in the dark. I dreaded every step and was in a constant mental struggle of not wanting to go fast and risk a fall but also not wanting to go slow and be so far behind that I’d feel alone.

We gave up on getting to the Osgood campsites and the minute we got below tree line, we ducked into the forest and stealth camped. While setting up our tent in a joke of a site, we heard a voice deep in the woods. Even further in the woods was a hiker who had also given up on getting to the Osgood campsite and decided to stealth camp. At least we weren’t the only ones who had their plans crushed.

Our tent pitches were slanted and flimsy as hell, but the tent was standing and covered us. Jackrabbit even struggled to find good enough trees for his hammock. But all in all we were just glad to be done hiking. Our feet were dead, and we were all definitely mentally drained from these hard miles. But in good news, Peach Fuzz said that Pinkham Notch Visitor Center, a mere five miles away, was reported to give free breakfast for thru hikers. I went to sleep dreaming of eggs and bacon.