Curfluffle. The sound of a small bag falling woke me in the night. Blinking confusingly, I turn over into my warm sleeping bag. Sweet Roll said that a mouse messed with her in the night, but she shooed it off and she thought it went over to me. I left my entire pack next to me while I slept. Call it hubris, but my recent reputation proceeded me. Even the front pocket of my pack was left open. There, my newly acquired half-pound of trail mix was gone except a few mouthfuls. They left that seeming to say, “see we’re not totally cold-hearted bastards.” It was my fondest wish that the responsible mice had actually gorged themselves to death, a hiker can wish. Though, I felt humbled and learned the lesson. Coincidentally, I’ve been reading The Guide to the Hitchhiker’s Galaxy where mice actually ran the earth as a carefully crafted ruse for humans. Trail mix for thought.

These days, I’m loathe to leave my sleeping bag. A weekend warrior says to me, “just get out and get the blood circulated,” sounds like a bad idea. But, I’ve got to get going sometime after sleeping eleven hours. 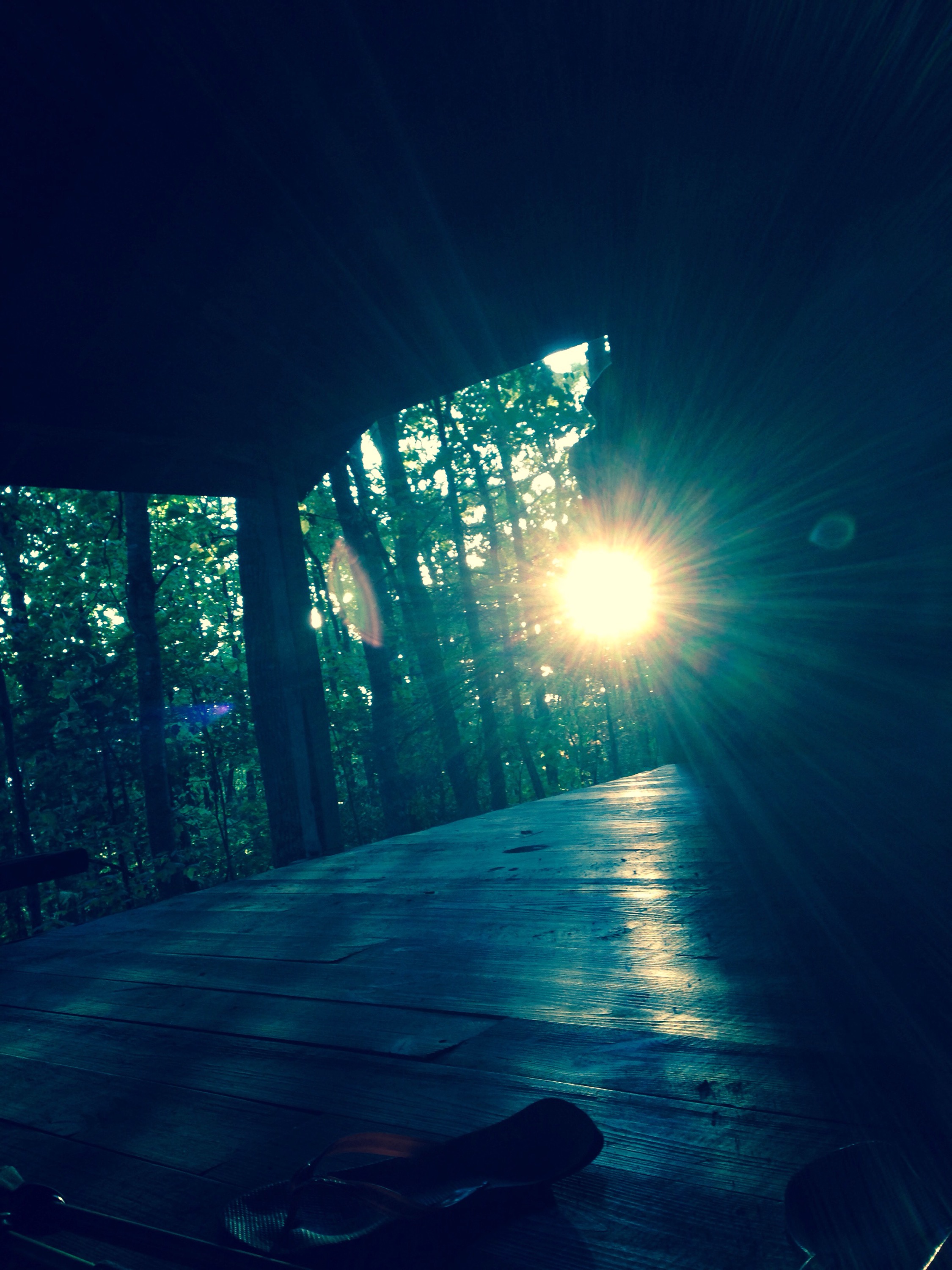 I literally live and die with the sun, which is shrinking at an incredible rate. If I hiked in Alaska, I’d only hike a few hours a day. The first forty-five days were all sunny; then, like a warranty date, the official day of Autumn rung and cold nights reigned supreme. All the hikers are complaining of carrying an extra pound or two of clothing so they can stay warm. I see it as a cost of doing business. Weather hasn’t really concerned me to this point, but that’s like a rich person saying they don’t care about money. Whenever a hiker bemoans rain in the forecast or cold weather I quote Twain, ““Everybody talks about the weather, but nobody does anything about it.” If someone asks me what the weather will be like, I tell them there will be plenty of it.

I’ve yet to walk through a fog so thick that I couldn’t make my way through. Yet, the fog from Atkins, VA to the Mt. Rogers Visitor’s Center was formidable. Fog cannot be captured in the palm of a hand much like cloudy water poured is seemingly clear, and so, the fog gives the forest a macabre feeling, a sense of foreshadowing to come, but nothing comes of it. I feel like Hansel and Gretel walking to the witch’s house, but that day would end in pizza at the Partnership Shelter. 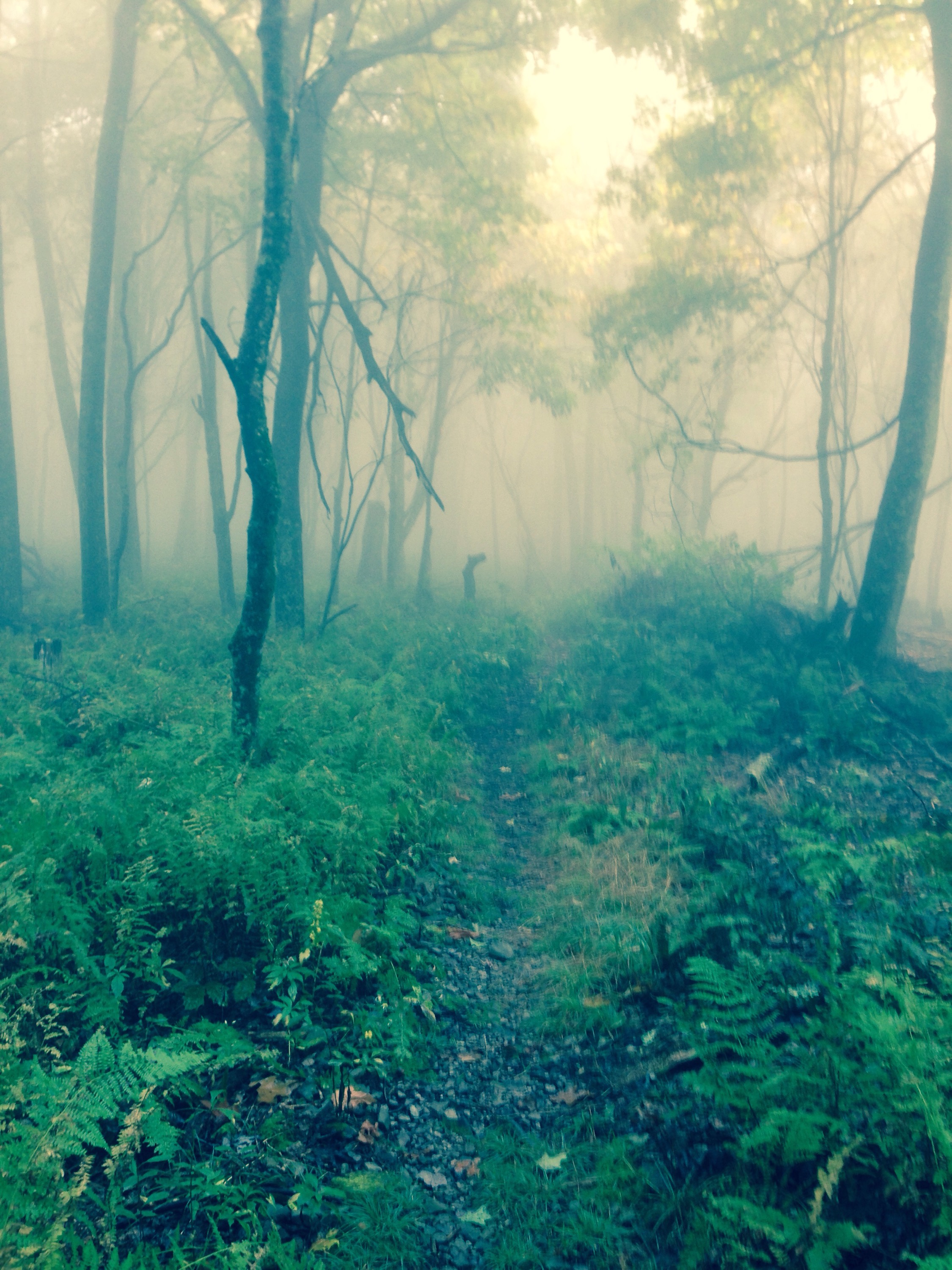 Besides the Priest, I barely broke a sweat with every other mountain in Virginia. The foggy day from Atkins south to Glade Mountain had an ascent so easy that when I came to my senses I realized that I was standing on it. Many mountains south of Glade will allow views from their bald tops instead of having me guess, “is this crest the top.”

I will naively assume that Grayson Highlands is the beginning of these balds southward. I read once that the act of looking up (at trees, clock towers, the sky, etc.) decreases depression, I’d posit the same for open spaces. Months on end, the AT hiker feels like a horse with shudders who lives out of their pack like a turtle . The rhododendrons really nails down the “green tunnel” metaphor in Virginia creating this next level darkness feeling during what should be a sunny day. Groan. Yet, this AT world is peeled back when it takes through cow pastures, meadows, and then the balds.

What do you call a prison made out of wood and purple flowers? A rhodo-dungeon.-Sweet Roll

Grayson Highlands allowed me to take stock of Autumn. Though most of the trees are still green; dead leaves and acorns crunch under foot, clog the river-ways, and salt-and-pepper the forest floors and treetops with outrageous yellows, oranges, and reds. No longer do mountains recede into the distance with hardly a difference between ridges, but these stark colors give it contrast. Meadows surround the Scales with young cleaving to their mother cows and horses eat these browning plants. For once, I walked through a young forest of hawthorns in the short reprieves between these bald meadows. My olfactory senses are flooded with smells of pony manure, dead leaves, and red spruce. Yes, the evergreen growth I missed for so long that crowded around the tree line of so many mountains in Vermont, New Hampshire, and Maine finally came back to me. This fragrance all but intoxicated me.

Large buttresses of rocks stood out among the briers and scattered lonely trees in a prairie that reminds me of my Midwest home. Short green grass is constantly mowed by the Grayson Highland ponies like I’m walking on a putting green. The Roundup of the excess ponies took place from September 19-23, so ponies were more scarce, but still evident. People told me they were bullies. They just seemed to mind their business and give me cursory glances. Perhaps the Roundup made them sheepish. If I was a little girl, I’m pretty sure I would’ve been freaking out more. At Thomas Knob Shelter I was able to see the sunset. Everyday I feel more blessed, happy, finding myself smiling at any given moment. 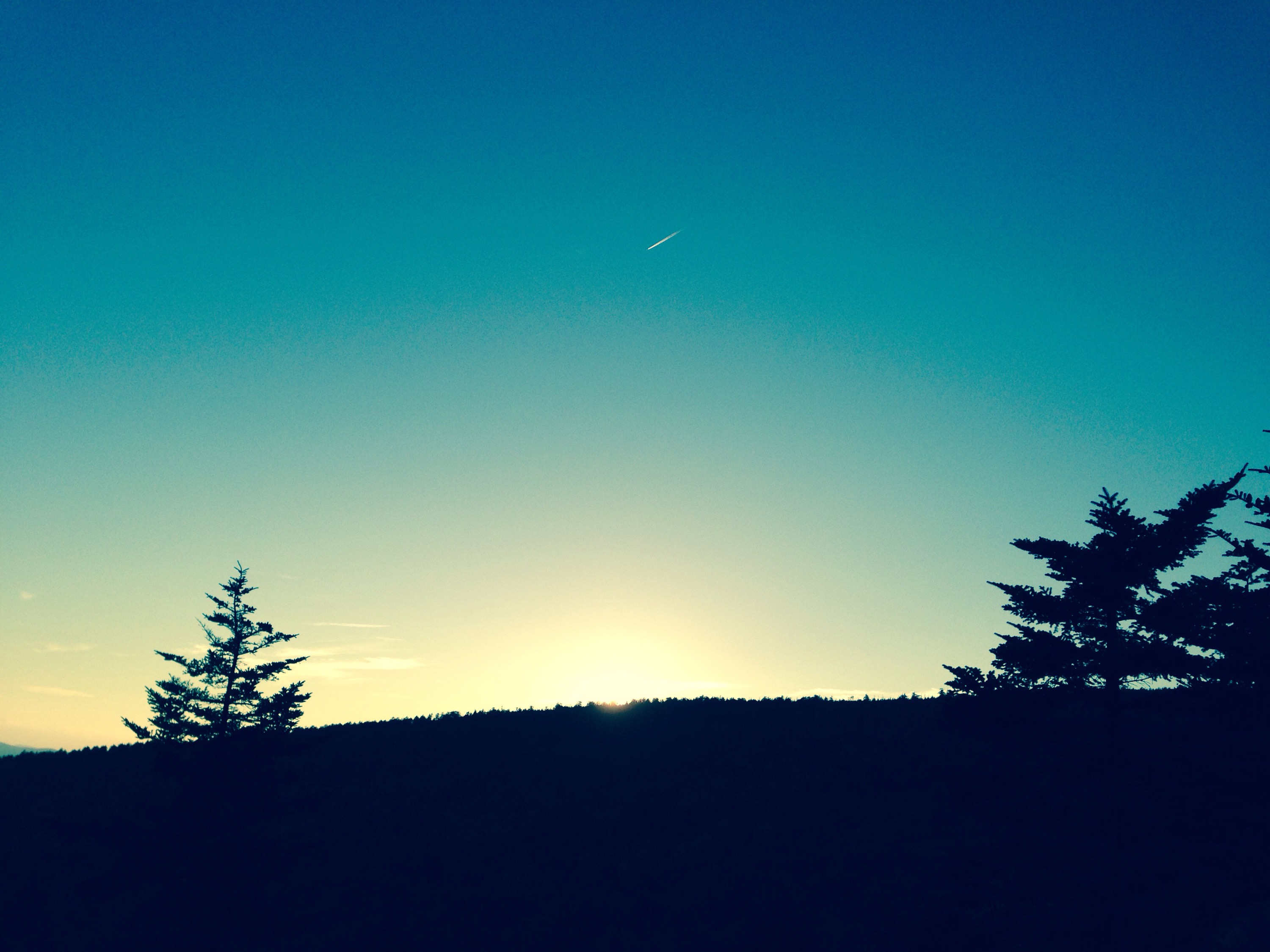 T-Mobile is the only wrong thing happening in my life now. I’m in Damascus, VA, but the last time I got coverage in a town was in Waynesboro, VA. That’s 400 miles ago. Climbing out of Pearisburg, VA, methinks I’ll get coverage and call my mom when I look out over the valley. Nope. In a rage, I climb up sixty feet up a powerline tower that says “high voltage” until I get service. 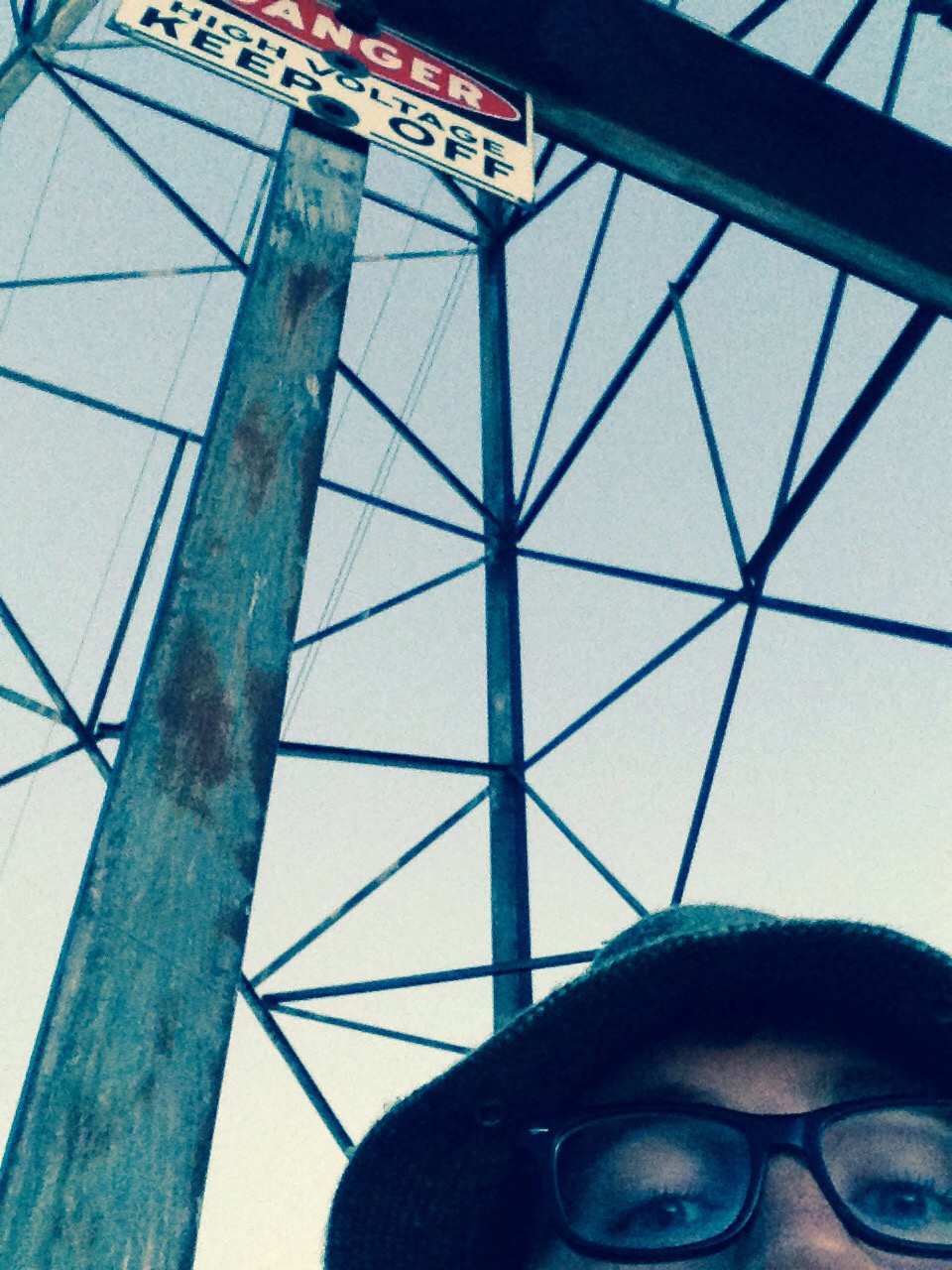 Marketers say if a consumer has a really good experience with a company they might tell two or three people. If they have a bad experience they’ll tell at least ten people. I’ve told at least fifty people and hopefully another 950 people by the end of the trail.

Coming down from the Chestnut Knob Shelter, Good People and I encountered two hikers (Jesse and James, coincidence) who had this ragged hound dog with them. It was blind in one eye, walked with a wicked limp, and appeared to be running on fumes. Two antenna collars were around his neck as he slept. He was lost, but latched onto Jesse and James wherever they walked. A few hours later Good People walked upon a cub bear digging out a hornet’s nest. A few miles later in the morning, I came upon a pasture of bulls. One with an all black hide, eyes, and hooves jogged across the AT and stood his ground. He fixed me with this impregnable stare that caught me off guard, but I matched him. Five minutes later, hesitantly, I continued walking. A hundred yards later as I disappeared into the hilly forest, a bull started mooing with this intense pitch every few seconds. What the hell?

Down the hill, I reached what I think is the last trail magic I’ll receive on the trail, a warm Sam’s Club cola. It’s all I ever wanted. At the road crossing where a fork of the Holston River passes under I stood there observing the farm I just passed. As I spaced out for a moment, my eye caught the river and there I saw part of a hornet’s nest floating down the river. A lone hornet clung to the vessel, a diorama-view of Katrina.

Days before in Pearisburg, leaving Wal-mart frazzled, a nice glimmer of hope took place in a black cat at the back of the lot. I meowed at it hoping to pet it. It looked at me and quickly ran into the sewer. Seriously, what the hell?

As I ate my breakfast at Trent’s Grocery, Citrus Bandit sat down next to me with a smile and said, “I’m leaving the trail.” Calmly, I put my sandwich down.

“Where are you going?”

“I’m going to road-walk to Chattanooga by Oct. 12th to meet up with my friends and drive out to California and rock climb.”

“You’re going to walk to Chattanooga?” I asked confused.

“Well, you should at least walk to Bland tomorrow, because if you don’t I think Good People’s brain will explode,” and so he did. The Citrus Bandit was my compatriot through many adventures and miles walked on the Appalachian Trail. I’m going to miss the hell out of him. Good luck Citrus Bandit. 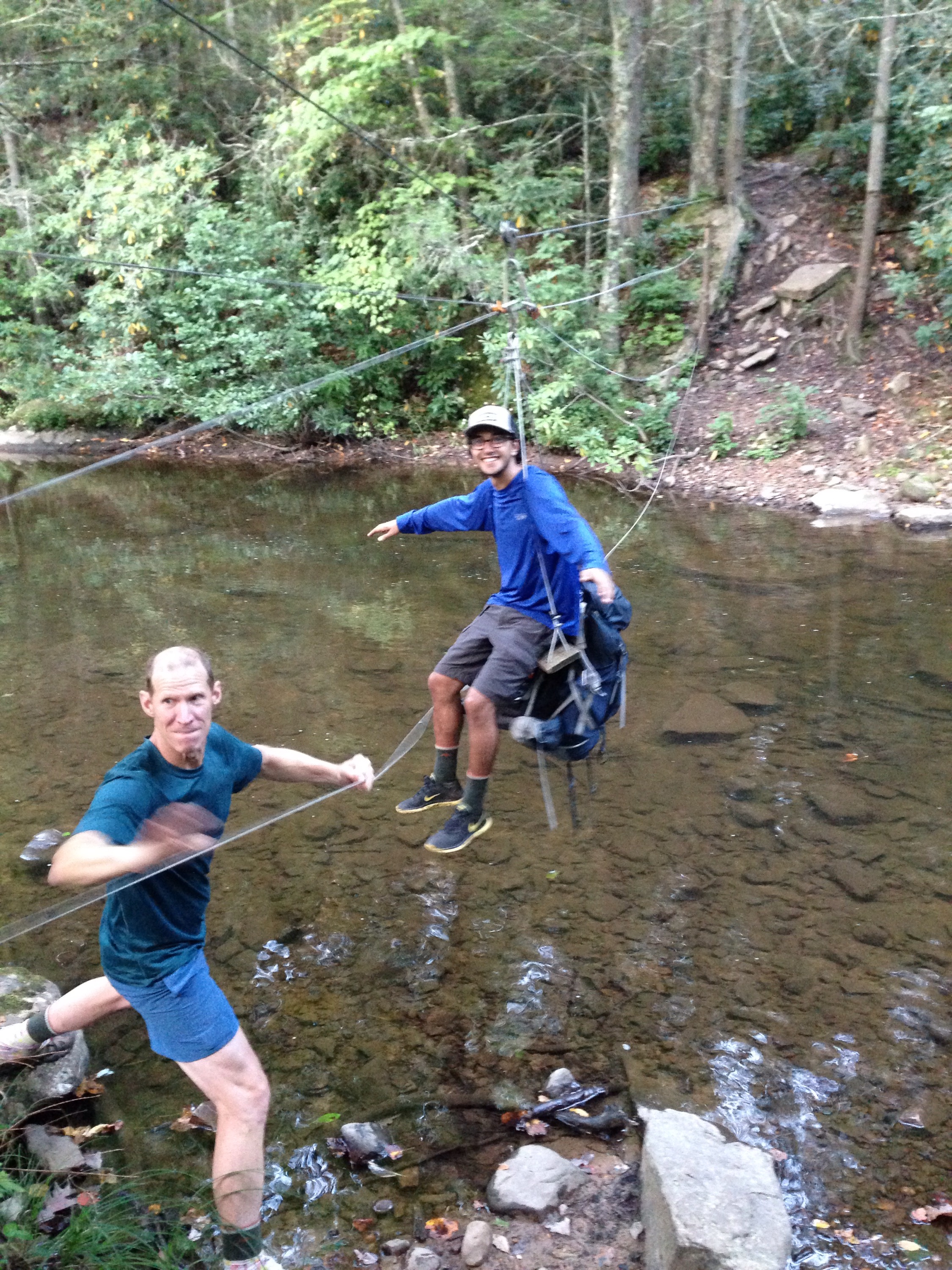