I am 5’1″, 100 pounds soaking wet, and definitely not an ultralighter.

I have nothing against ultralighters, but for my Appalachian Trail thru-hike this year, I was not among their ranks. The primary reasons were that I couldn’t afford the steep prices that typically accompany ultralight gear, and I was skeptical about the comfort/usability of ultralight options. So I spent months finding the gear that I thought would work best for me during my AT thru-hike.

My base weight was about 20 pounds, which was a very manageable weight for me, even on the hardest ascents of the Whites and Katahdin. And with only a few exceptions, I absolutely loved my gear.

In this post, I will cover the top pieces of non-ultralight gear I loved, the very few that I traded, and why. For my full gear list from my AT thru-hike, check me out on HikerLink.

READ NEXT – Power to Petites: Thru-Hiking Tips for Small Women 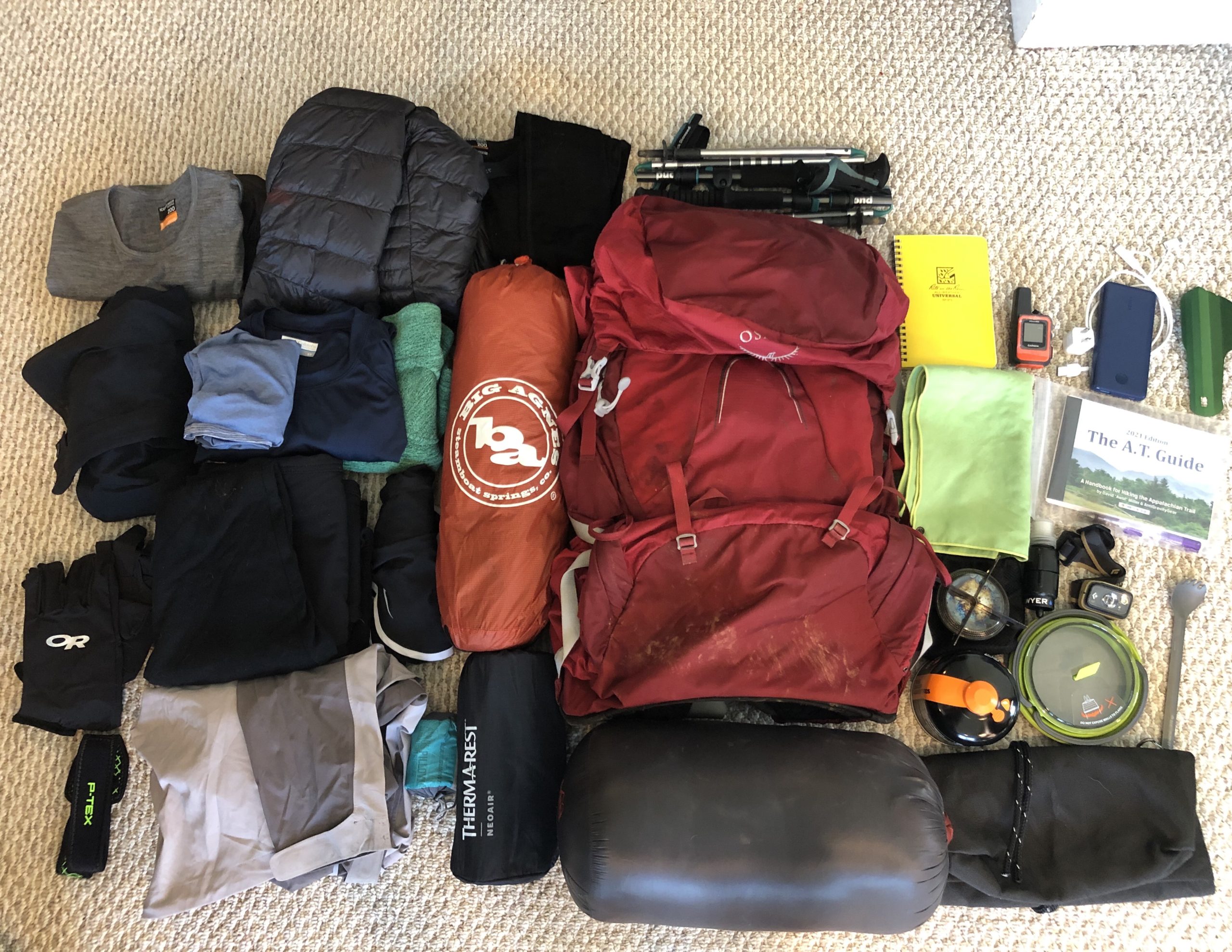 The gear I started with on my AT thru-hike.

Gear I Absolutely LOVED on My AT Thru-Hike

I get cold very easily. I’m not convinced that my body produces heat the way it’s supposed to– I can’t even heat up an entire sleeping bag, there’s always cold pockets at the foot and along both sides where my body isn’t lying. So my biggest concern heading out onto the AT was being cold. Enter amazing sleeping bag.

Yes, I am Team Sleeping Bag, not Team Quilt. I love sleeping bags because they have very little chance for drafts, and the hood provides a TON of extra warmth. And this sleeping bag has an extra advantage: a shoulder flap.

The only draft problem I’ve ever had in a sleeping bag was down the neck. But REI’s Magma bag has an insulated flap around the shoulders that completely seals this region off, leaving zero room for drafts. Aka cold weather paradise.

In late March and early April of my thru-hike, there were many nights where the temperature dropped well below freezing. The lowest that I experienced was 17ºF, which is the stated comfort limit for my bag. But I didn’t have a single cold night on trail. Thanks to the marvelous power of my sleeping bag. 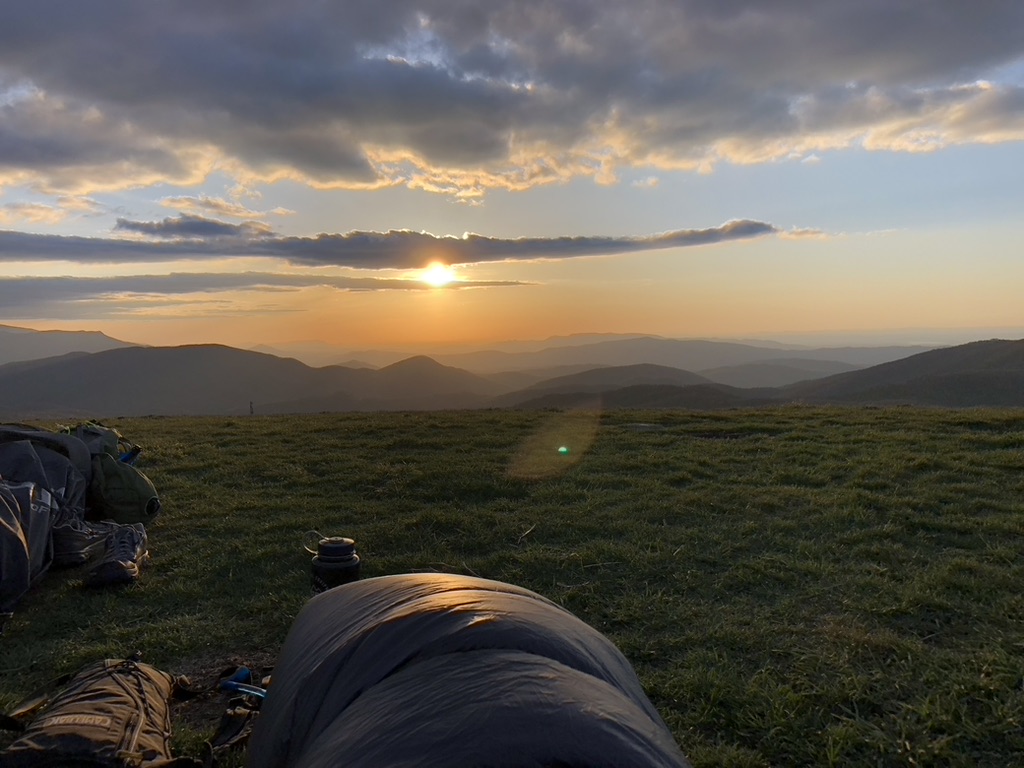 I don’t have many pictures of my faithful sleeping bag…but here’s the end of it on top of Max Patch (before camping there was outlawed).

Another savior of mine from the bite of winter. They’re not light, but they’re worth absolutely every ounce. I wore these after reaching camp until I was ready to climb into my sleeping bag, and they kept me warm on the coldest nights until that moment came.

In addition to being warm, they’re also water-resistant, so they kept me warm and dry on snowy days on trail. Rain pants will keep you dry, but not nearly as warm. My only complaint about these pants is that I bought the smallest size available and they were still about three inches too long for me. But that wasn’t a huge deal, just added extra insulation to my ankles.

A lot of people get by without heavy-duty pants like these, but there were many nights where I would’ve been an ice cube while doing camp chores without them. If your body has a normal-functioning heating system, then you probably don’t need them. But if you’re like me and your internal heater works about as well as an empty lighter, maybe grab a pair. 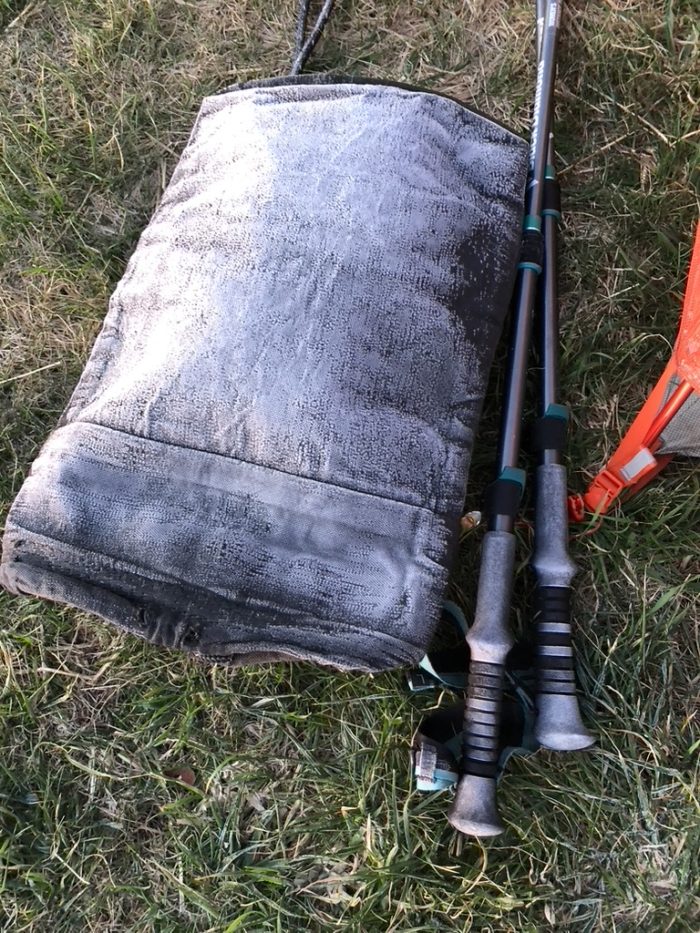 My frost-covered Ursack after a sub-freezing night.

Disclaimer: the price on this has gone up since I purchased it. And it’s only acceptable in black bear-only territory (would not use around grizzlies). But let me paint you a picture.

It’s the beginning of the Appalachian Trail. You’ve just finished a very long day of hiking, all you want to do is eat and sleep. While your hiking companions tromp off into the woods in search of the perfect tree to hang food from, you sit down and begin cooking. They have to hang their bear line before it gets dark and spend 45 minutes searching for the perfect tree and getting their rock over the right limb. As the days go on, they’ll get better at it, and it will only take maybe five minutes. But for you, it always takes about two. Because you have an Ursack.

READ NEXT – The Case for Bear Canisters on the Appalachian Trail

Virtually puncture-proof Ursacks can just be tied to the base of any tree that’s far enough out of camp (100 feet or more according to the U.S. National Park Service). Very quick and easy.

Guys. It collapses. Making it super small, so it’s not an awkward fit in the pack like normal metal pots/cups. And, because the base has a wider surface area than most containers hikers cook in, it boils very fast. I could get enough water for one pack of ramen boiling in about two minutes.

It is difficult to clean without a sponge, but we’re hikers. We don’t need clean. And I usually do the actual cooking in a Ziploc bag. With my camp shoe as a potholder. 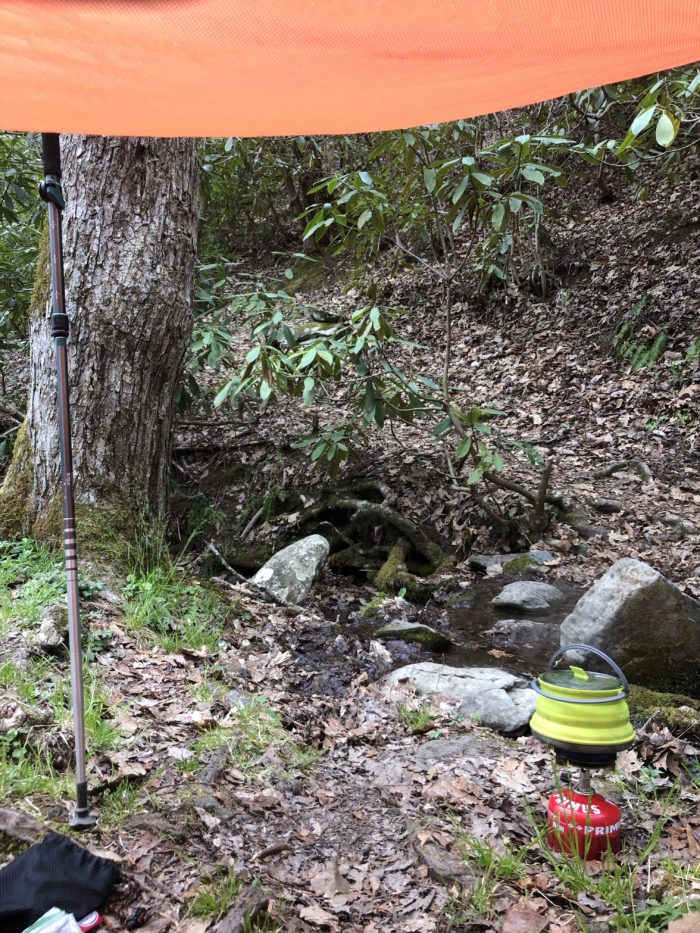 Cooking under my tent’s awning on a rainy day. 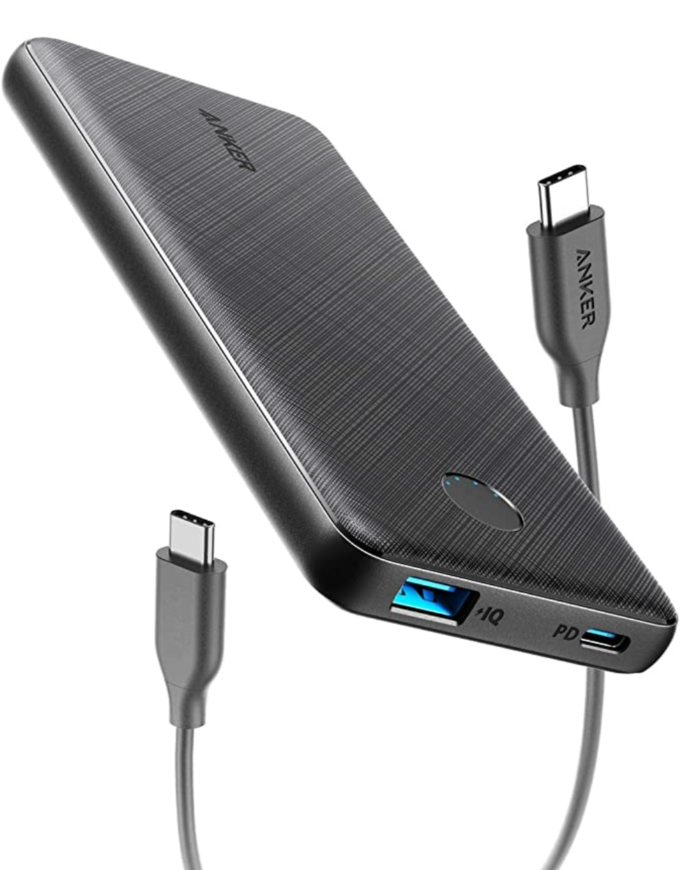 I’m not here to start an argument about the use of technology on trail, but here’s what I did.

I used my phone, an iPhone 8, for pictures and sometimes music (usually only for a few hours in the afternoon, and not every day), keeping it on airplane mode and low battery all the time. I also had a Garmin inReach Mini that I used to send a message to my mom in the morning and at night to keep her sane and not imagining her oldest child lost or dying in horrible ways (love you mom)(the trail is really super safe I promise). Both of these devices needed charging every three to four days, but I typically only went into town about once a week. So I’d plug them into my Anker battery.

READ NEXT – Are Solar Panels Worth It for Backpacking?

With charging both devices every three days, my external battery lasted about ten days (usually the final charge wasn’t quite all the way). Which was perfect, because while I went into town about once a week, I usually only spent the night once every two weeks, giving me enough time to recharge everything.

That is the one downside to this charger: it takes FOREVER to recharge. I think it takes about 10 hours from dead to fully charged. However, I was carrying a normal Apple brick/block/wall-plugger-thing and I’ve been told that there are other plugger-things that can send more electric juice through at a time, shortening the recharge time. (Obviously, I’m a technological expert, can’t you tell?) So I will be investing in one of those before I need my Anker battery again.

There aren’t many of these, because overall, I was very happy with my gear selections during my AT thru-hike. But here are the few that had to go.

The Sawyer Micro Squeeze is smaller but supposedly has the same flow rate as the Sawyer Squeeze (a bigger version). Neither of which should be confused with the Mini. (The Mini is the smallest, then the Micro, then the straight-up Sawyer Squeeze which really needs an extra name cause it’s confusing. I will be calling it the OG).

In my experience, the Micro began with great flow that was the same as the OG. But it needed backflushing much more often than my friends’ OG filters, and after the initial backflush, it never regained the original wonderful flow no matter how much flushing was done. So I switched to the OG because I got tired of spending 12 minutes filtering one liter of water. With the OG, even after needing to flush several times, it only took maybe two minutes (not sure exactly, but a very short amount of time).

At the same time, I traded out the bag I was squeezing the water with. I was previously using the bag that comes with the filter, which some people have an issue with busting. Though I didn’t have any problems with it, I was jealous of the people who could just open the back end of their CNOC bag and scoop a whole lot of water way faster than could flow through my tiny cap hole. Lots of hikers on trail kept their Sawyer bag the whole time, but I very much love my CNOC. 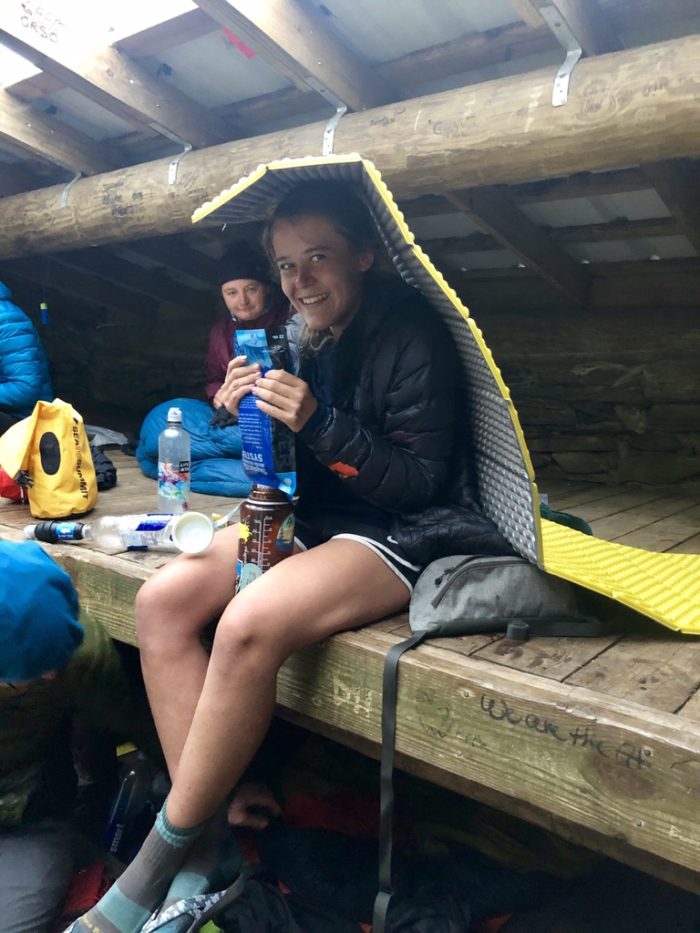 The traded filter system (the roof was leaking so I needed extra shelter).

I started the trail with The A.T. Guide by David “AWOL” Miller because I didn’t want to be constantly checking my phone when using Guthook. I really love the A.T. Guide, especially the town maps, but in Pennsylvania, it began slacking.

I found that Guthook had many water sources that the A.T. Guide didn’t, and water was becoming very important because July and August were super hot and dry. Now yes, I definitely could’ve been fine by planning ahead and carrying tons of extra water. People did it for decades before guidebooks were a thing. But, since Guthook does exist, why not take advantage of it and not have to carry water unnecessarily? 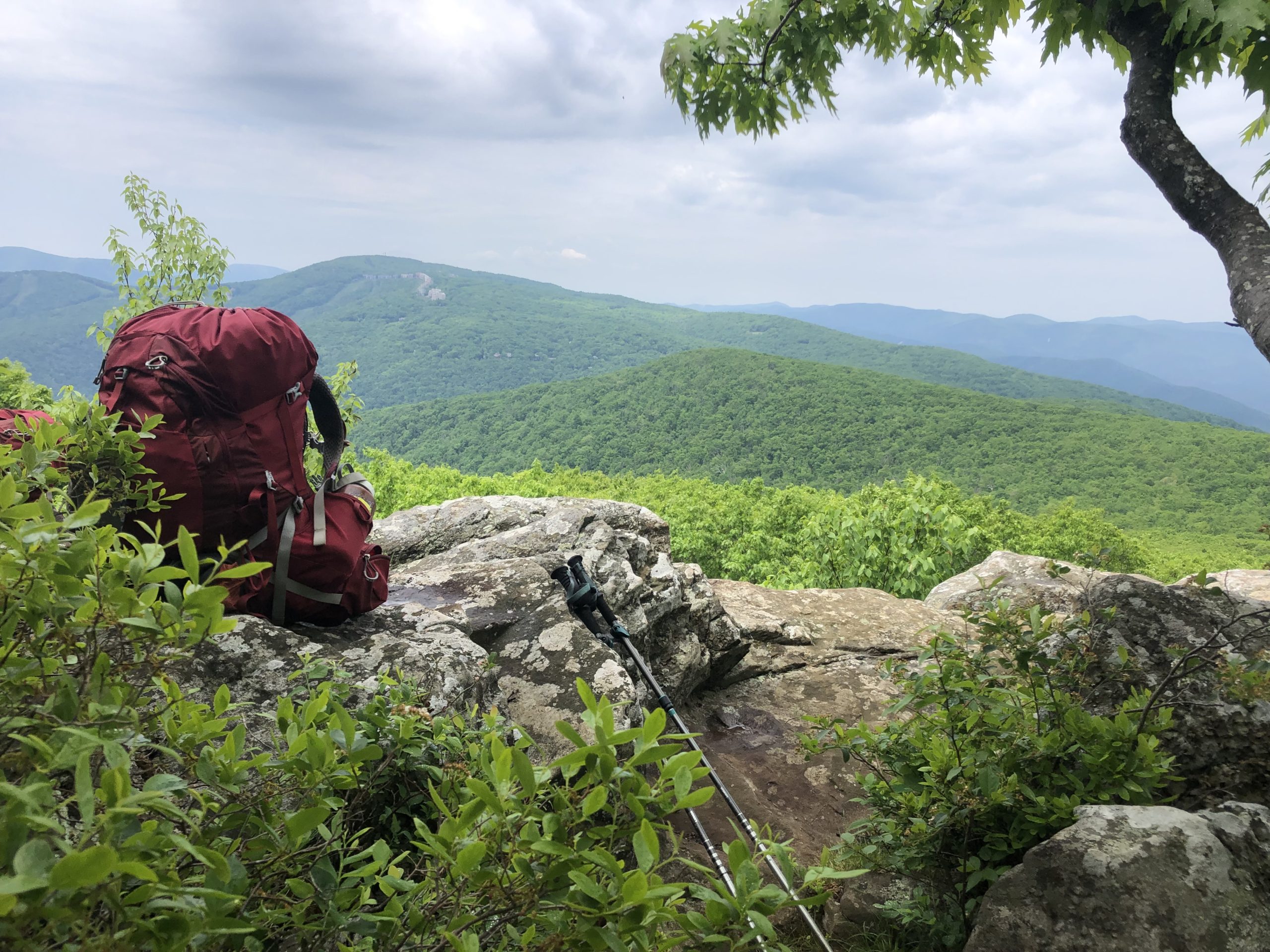 For the most part, I was very happy with the gear I used on my AT thru-hike.

I still continued to carry the remaining pages I had left of the A.T. Guide, and they came in handy when planning ahead. I have a hard time planning ahead on Guthook, I keep forgetting stuff and having to scroll back, so it was nice to have the pages laying side-by-side so I could see it all at once. But if I were to go back in time, I would start the trail with just Guthook.

So that’s it, that’s all of my post-AT thru-hike gear thoughts as a non-ultralight, non-regular-sized thru-hiker.

To anyone out there who wants to thru-hike but isn’t sure about the whole ultralight thing, take heart. It’s all about finding the balance between what you can afford, what you find comfortable, and what you can reasonably carry for thousands of miles. Don’t let anyone tell you what you should be carrying. Do research, listen to the experienced opinions of others, then go build your unique gear list.

I’m on the smaller side of the spectrum, and I did it. With enough determination, you can too. Ultralight or not. Or somewhere in between.